When I was younger my parents used to say that time has a way of going faster the older you get. My sister, brother, and I used to laugh because at the time it seemed like high school was light years away. I’m now 24 years old and have already sped past college graduation; it’s safe to say my parents’ saying has officially become a reality. It seems like just yesterday that we were pulling into the yard with our combines after finishing up the wheat harvest in North Dakota. It’s hard to believe that it’s time for us to get loaded up and head south for another run already!

The 2013 harvest officially came to an end on December 10th, after a long few months of harvesting corn, millet, sunflowers and edible beans around home. Like most places, Nebraska endured an extremely long winter and a surprisingly wet spring.

In February, my family experienced the heartache of losing my grandfather, Robert (Bob) Roland. At the age of 89, Grandpa Bob was an anchor for Roland Harvesting and his wisdom was passed onto our family and countless crew members. Hearing his intriguing stories of custom harvesting in the 1940’s is originally what sparked my dad’s interest in agriculture. This time of year Grandpa Bob could be spotted checking things out on the farm and driving around the equipment lot to see how everything was coming. Grandpa Bob was my proudest All Aboard Wheat Harvest fan and was always sure to tell everyone he knew about it. He is truly missed, but I’m certain his spirit will live on through harvest.

For the new readers out there, Roland Harvesting is owned and operated by my parents, Alan and Loretta Roland. My dad has been doing custom harvesting since 1978, making this his 36th year of harvest. We run a family based operation that my older sister (Ashley), myself, and younger brother (Brandon) were raised as a part of and continue to help out with. We grew up on a farm near Hemingford, Nebraska, where our parents still reside, farm, and operate Roland Harvesting. Upon graduating college Brandon plans to take over the business.

After spending last summer on harvest I finally moved to Sheridan, Wyoming, in October to begin my career as a labor & delivery/pediatric nurse. Since I have a “real job” this summer I won’t be able to follow the harvest run full time like I have for many years. However, I will be using my “nursing hours” to my advantage and hope to track down the crew as much as possible.

This summer Brandon, Mom, and Dad will be hitting the road for yet another season of harvest. Matt is a new face to Roland Harvesting and will be a primary truck driver this summer. Matt is from Troy, Michigan, and is a fellow classmate of Brandon’s at the University of Wyoming.  Another new face is Justin, who will be a Sophomore at Hemingford High this fall and will be trained as a combine/grain cart operator.

Roland Harvesting will begin our move south in the next week. Our farmers in southern Oklahoma report another year of severe drought. Ironically, they have received 3 inches of rain over this past weekend. I’m afraid it’s a little too late for this year’s wheat crop, but one can never complain about moisture.

This is my fourth summer of sharing Roland Harvesting’s adventures through AAWH, and we are excited to have you along for yet another journey! 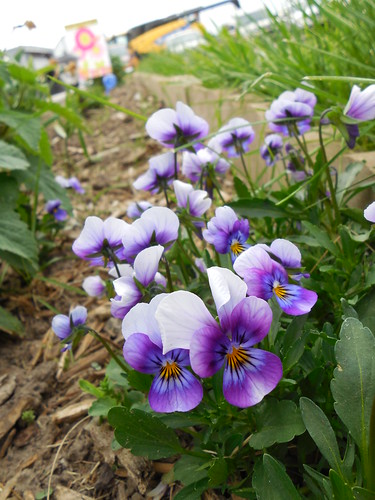 Mom gets to enjoy her flowers a short time before leaving for harvest. With the combine in the background, we know our departure date is in the near future. 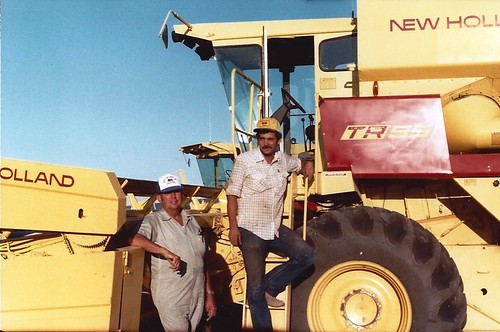