All Aboard Harvest | Megan: Move ‘em on, head ‘em out!
7520
post-template-default,single,single-post,postid-7520,single-format-standard,qode-quick-links-1.0,ajax_fade,page_not_loaded,,qode-title-hidden,qode-theme-ver-11.2,qode-theme-bridge,wpb-js-composer js-comp-ver-5.4.7,vc_responsive

Hemingford, Neb. – “Move ‘em on, head ‘em out!” In case this doesn’t ring a bell, here’s a little refresher: http://www.youtube.com/watch?v=AKC8pSFg1Vw

Although this classic is a theme song to the old-time American Western TV series, Rawhide, it is often heard across our radio frequency as we prepare to hit the road.  We also appreciate the beginning of the song, “rollin’ rollin’ rollin,” since it sounds a lot like Roland!

On May 28th, part of the Roland Harvesting crew double checked their oversized loads and started the journey south. Although our crew is small but mighty this summer, we were able to round up some friendly faces from Hemingford to help us move much of our equipment. Brandon and Matt made a quick trip down the week before to drop off two grain trailers, so that in itself made this convoy smaller than usual. Unfortunately, Mom and Dad had to stay behind to finish planting crops and spraying fields. They were able meet up with the rest of the crew a few days later.

The crew stopped in Imperial, Nebraska to pick up the second CR that had had some warranty work completed on it this winter. Before loading up the combine, a crack in the combine trailer was discovered. Luckily, one of our helpers, Tanner, is a certified welder and was able to repair the trailer in no time. Even with this fiasco, the convoy was able to make it to their planned stop for the evening in Colby, Kansas.

After another day of traveling, Roland Harvesting finally pulled into their destination near Altus, Oklahoma. Although the wheat wasn’t quite ripe enough to start cutting, Brandon stayed in the area on stand-by for when the farmer gave him the “A-okay.” The rest of our convoy drivers headed back north to Nebraska. A big shout out to everyone that helped us move! In this day and age we always seem to be short-handed on hired help so we greatly appreciate any extra assistance we run across.

The exciting thing about traveling south is that you can check out the wheat crop along the way. Brandon reports the wheat in southern Nebraska and northern Kansas to be looking fairly decent at this point. However, Oklahoma remains in a severe drought that has certainly affected the crops. Dad received word from our farmers in the Enid, Oklahoma area that wheat will be ready there within the week. 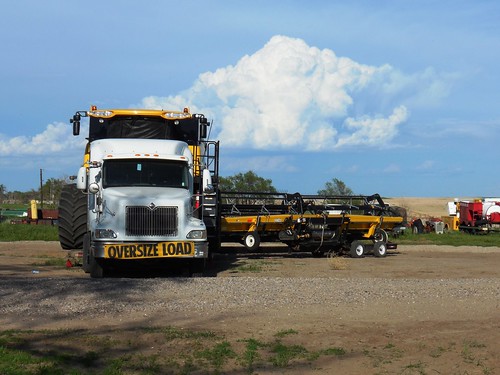 When the equipment is all loaded up you can practically smell the wheat dust it’ll be kicking up in a few days. 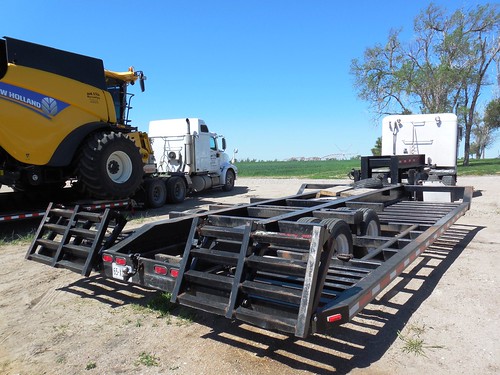 The convoy looked a little bare for the first few hours of the trip until the second CR was picked up in Imperial, Neb. 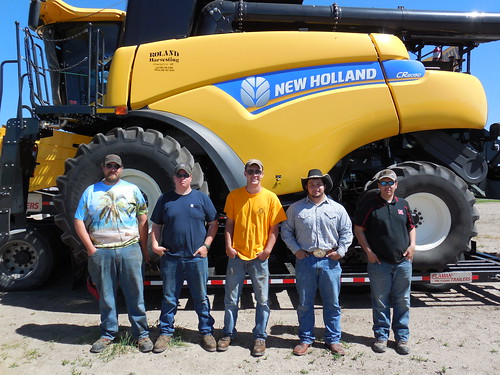 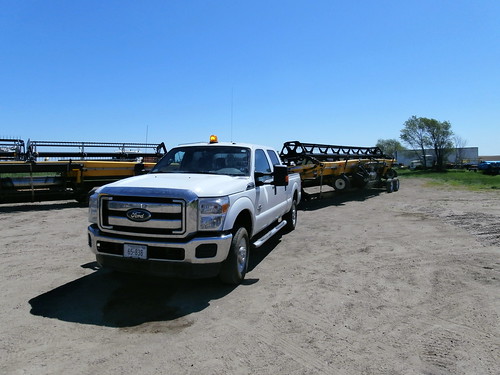 Matt took the lead with the trusty ol’ pickup and header. 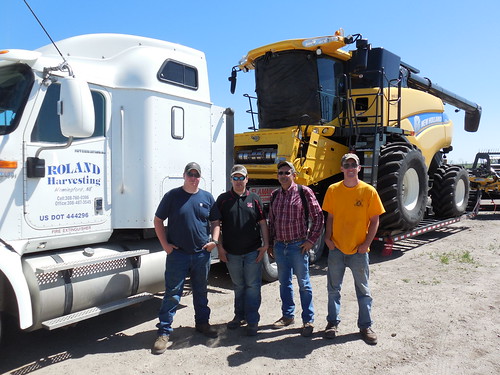 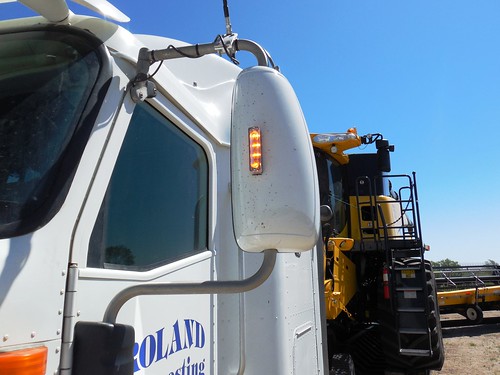 These safety lights are the newest updates to our semis. The flashing lights can be seen for miles down the road and help alert oncoming traffic of our oversized loads. 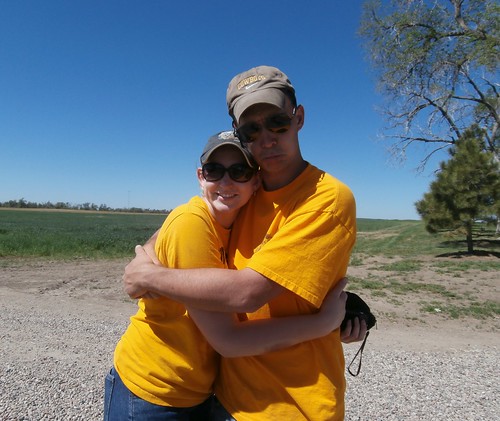 Sadly, I was left behind this year due to my nursing job. I think Brandon was even upset to see me wave good-bye in their dust. 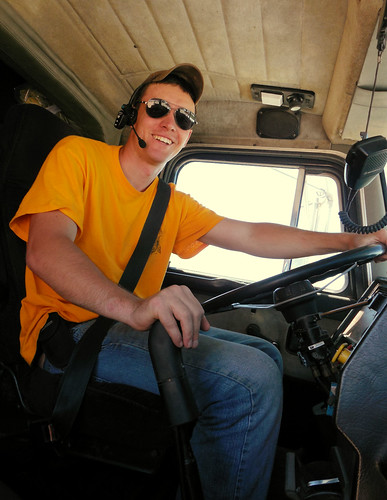 Although Brandon’s favorite seat is behind a combine wheel, he had to play trucker for the move south. 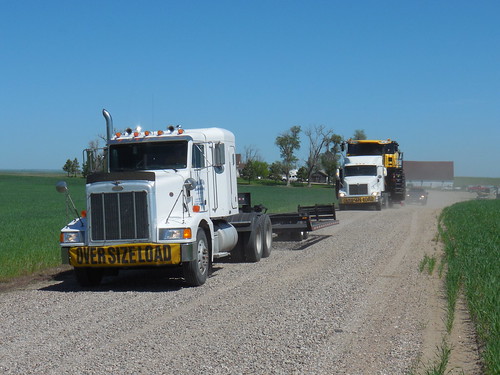 The convoy leaving our farm and starting the 700 mile journey south.

I must say, it was a very strange feeling to watch the convoy fade away into the distance instead of fearlessly leading them like I usually do. This year we also missed the friendly faces of my grandparents watching on as the crew prepared to leave. 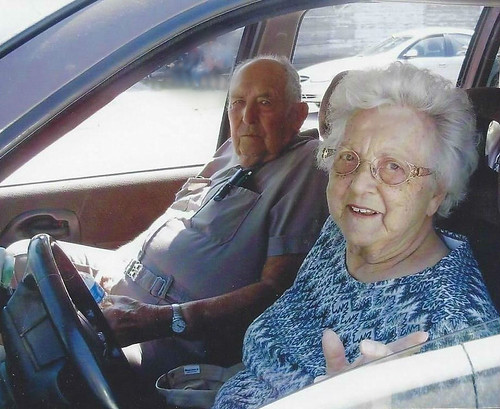 Flashback to 2008: Grandpa and Grandma could always be found around the farm on moving day. Grandpa Bob would eye each and every load then question the driver about safety chains, shifting patterns, passing visibility, speed limits, and any other concern he had. As the convoy moved south, Grandpa Bob always expected check-in phone calls from the crew to update him on our status and location! 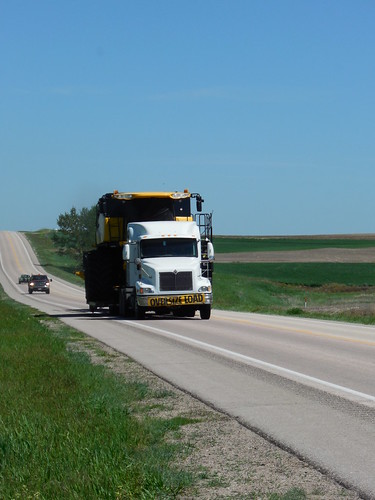 Roland Harvesting is officially back on the road for another year!