All Aboard Harvest | Megan: One Stop Down
7692
post-template-default,single,single-post,postid-7692,single-format-standard,qode-quick-links-1.0,ajax_fade,page_not_loaded,,qode-title-hidden,qode-theme-ver-11.2,qode-theme-bridge,wpb-js-composer js-comp-ver-5.4.7,vc_responsive

18 Jun Megan: One Stop Down

Gould/Duke, Okla. – On May 31st Roland Harvesting officially kicked off the 2014 harvest season! Despite many obstacles, ranging from the drought to a small crew, we were able to begin combining in the Altus, Oklahoma area. After months of anticipation and weeks of planning, it is always a relief to have everything fall into place as you make the first round of the year.

Since we have been coming to this particular stop for many years, we have developed a routine with the farmers. This helps to optimize efficiency and time for everyone.  It’s important to realize that many factors influence the pace at which a wheat field ripens. The time of planting, varying soil types, and moisture received during the growing season can all make the difference between combining a wheat field that is ready or struggling with green straw and wet grain.  For these reasons, we collaborate with the farmers and make a tentative game plan. At this stop, our pattern has always been to start cutting around the town of Gould and work our way towards Duke. To save time and fuel it is ideal to harvest the fields closest to each other and then travel the 20 miles to the next few. Of course, this takes place in an ideal world and doesn’t always happen, but we do our best.

Needless to say, the past two weeks have been a bit of a whirlwind. Since my parents were still back in Nebraska, Brandon and Matt started things off as a 2-man crew. Our farmers, John and Ben, came to the rescue and helped us out until Dad was able to make it to town a few days later.  After a night of driving nonstop and multiple cups of coffee Dad finally met up with the crew on June 4th.

Due to the drought and late freezes the wheat in the area is making between 5 to 18 bushels per acre with test weights running 58 to 60 pounds. As you’ve heard from the other AAWH correspondents, the severe drought remains throughout the south but Mother Nature recently gave that part of the country a bit of a break. Last weekend the Altus area received over 5 inches of rain and put Roland Harvesting out of commission for a couple days. Our farmers say they’ve had more moisture in the last week than they saw all of last year!

Sadly, that rain came too late for this season. The wheat has a very short stand which has made harvesting it extremely difficult. The headers just barely skim the ground and it’s been challenging to keep them out of the dirt. After all the rain last week, the crew spent their next few days fighting mud and plugging up the canvas on the header. The grain was dry but the ground wouldn’t hold the combines in many areas. On Thursday, it was decided between us and our farmer that it was better to leave the last 100 acres than to rut up the field, especially since no-till farming is unforgiving of such tracks. Friday morning the crew began the process of loading up and moving to our next destination near Alva, Oklahoma. This area received over 6 inches of rain last week but we’re hopeful that the fields have dried out enough for us to start cutting.

Photo credit goes to Dad, Brandon and Matt – thank you for sharing! 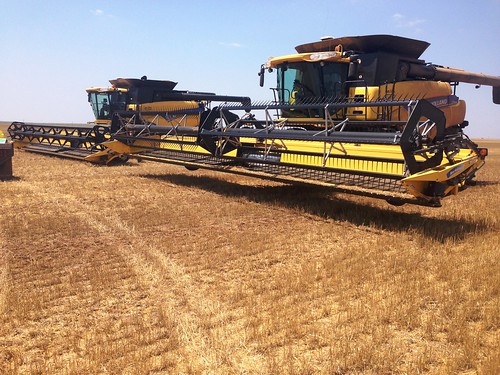 The CR’s unloaded, greased up, and ready to roll.

A special shout-out to New Holland Support for sticking by our side as the last of us harvesters finished up in southern Oklahoma! Many other “Support Crews” headed north after the rain hit to follow the majority of their crews. On behalf of the “straggling” harvest crews we greatly appreciate all your help! 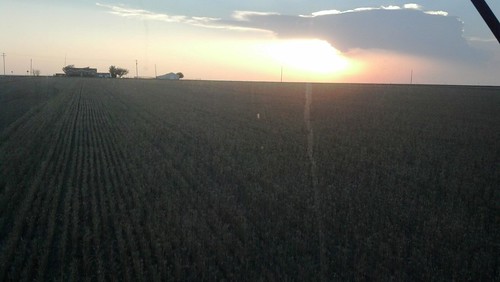 A view from the combine cab. I think Brandon misses me…look how filthy that windshield is! 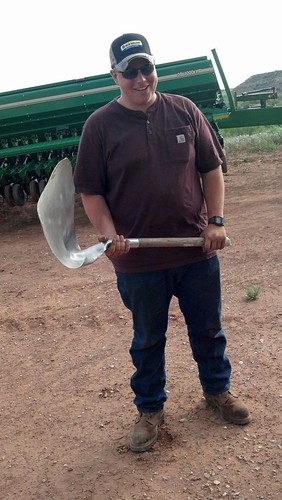 Matt, what happened?!  Truth be told…We usually keep scoop shovels secured on the grain trailers in case (heaven forbid) there is spilled grain that needs to be cleaned up. One shovel managed to shake loose and was inadvertently run over. This is the aftermath. 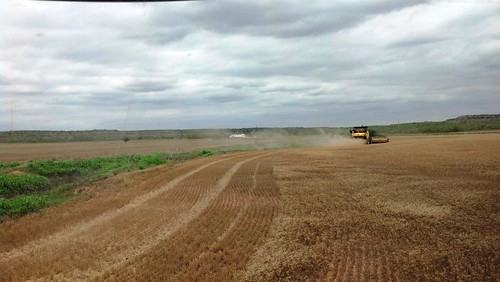 Twenty years ago it would have been impossible to run a fully functional two combine harvest operation with just three crew members. With the advances of technology on the equipment and with the drought causing decreased yields, this 3-man crew is a reality for Roland Harvesting! 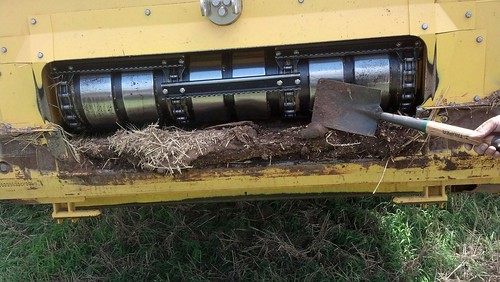 Just diggin’ out dirt from the feeder house while the header is off. These mini shovels have been Dad and Brandon’s saving grace. 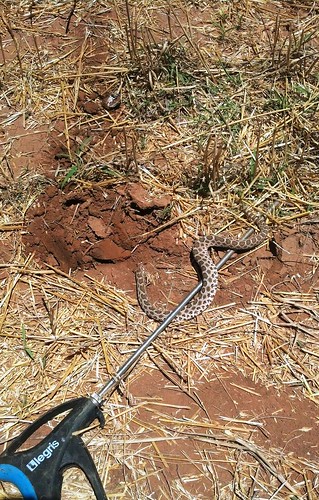 Snakes are a hidden hazard out in the field and you always have to be on the lookout for them. Brandon was blowing off the combine and almost stepped on this little guy!

One of the trucks all loaded up and headed for town. 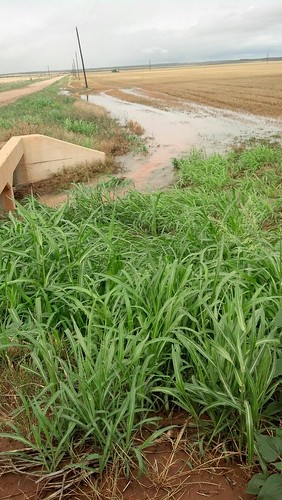 Rain day! These puddles were a welcomed sight by all the farmers. 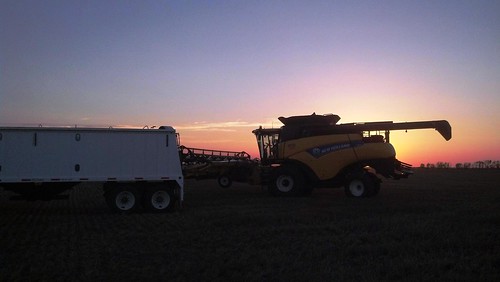 The crew knows that sunsets are my favorite! 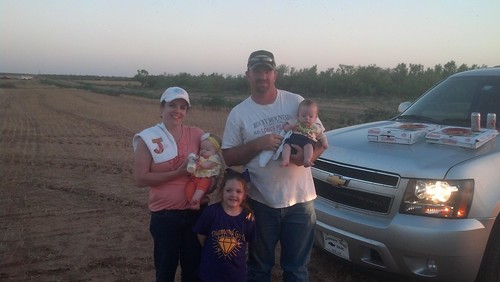 Every harvest season we look forward to seeing our “farmer friends” at each stop. Meet Ben, Amanda, and their adorable children, Madilyn (5 years), Jace and Jolie (6 months – yes, they’re twins!). We also harvest wheat for Amanda’s parents, John and Mary, and her brother, Ryan and his family. I sure missed catching up everyone this year!

Madilyn is quite the farm girl and is always excited about harvest time. This year she was ecstatic to drive the combine and even asked if she could write her name in the wheat. While heading home with her Papa she told him, “It was the best day ever!” 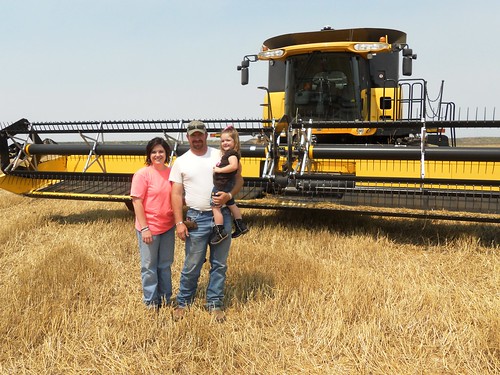 Blast to the Past – Flashback to 2012: Ben, Amanda, and Madilyn after a combine ride. It’s amazing how much this family has grown over the last few years!