All Aboard Harvest | Megan: Have A Little Faith
7792
post-template-default,single,single-post,postid-7792,single-format-standard,qode-quick-links-1.0,ajax_fade,page_not_loaded,,qode-title-hidden,qode-theme-ver-11.2,qode-theme-bridge,wpb-js-composer js-comp-ver-5.4.7,vc_responsive

29 Jun Megan: Have A Little Faith

Carmen, Okla. – Usually Roland Harvesting is kept tremendously busy in this area, running around nonstop for weeks on end (or so it feels like). Sadly, this year we were in and out in less than a week. Our farmer, Neal, said they received a solid rain after planting in September, giving the wheat an initial good stand. Between the 15th of September to the 15th of May the Carmen area received a total of 5 inches of snow, which accumulated into a mere 1/2 inch of moisture.  Mother Nature continued in her furry and on April 24th a cold spell and heavy frost settled in overnight. This occurred during the high boot stage, which is a vital growing stage for wheat.

Due to these circumstances, Neal was forced to put over 300 acres of wheat into pasture. The cattle could only be grazed for 65 days, then pulled off. Another 400 acres was put into wheat hay after the crop adjuster estimated it would yield 2.7 bushels per acre at best. It took 5 windrows raked together to even make enough to bail.

Alfalfa County, which contains 11 communities (including Carmen, Helena, and Jet – to name a few), reported the average yields to be between 15 to 18 bushels per acre with test weights around 58 to 59 pounds. However, most farmers would agree these averages reported are probably on the high end. This year Neal experienced the lowest yields he has ever seen in his 35 years of farming. He even planted several different varieties of wheat but between the drought and freeze the entire wheat crop was affected.

In years past, our crew is typically split up between Carmen and the nearby town of Helena, as we combine in both places. Dad has consistently been harvesting wheat around Helena for over 30 years. However, this past winter one of our long time farmers, Virgil, from the area passed away. Helena endured an even more severe drought, leaving many farming operations with little to no wheat to harvest. Virgil’s son, Tom, has taken over the farming and had to destroy over half of their wheat crop this year due to the impact of the drought. It was a strange feeling to pass by one of our usual stops this season but change is part of harvest. Hopefully next year brings more moisture to the area and in turn, more acres in our harvest run!

Photo credit goes out to the crew again! 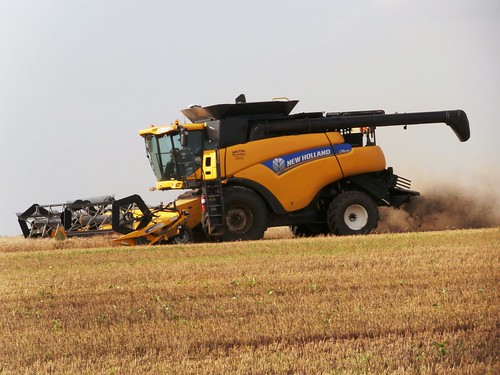 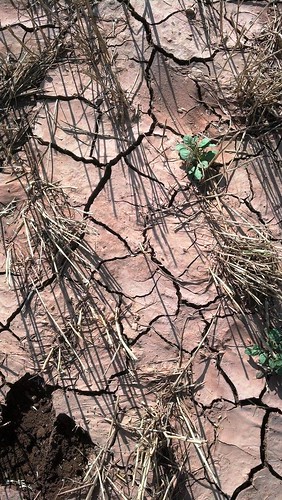 The cracked ground and short stubble is a sight farmers and harvesters would rather not see. 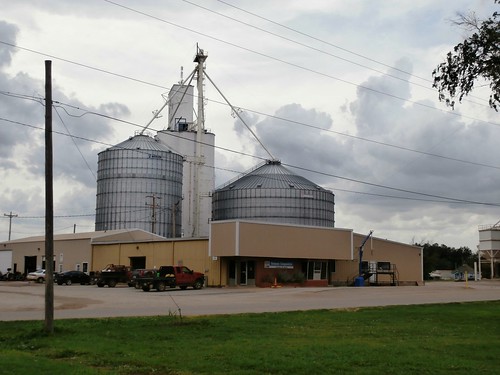 It’s the heat of harvest but you wouldn’t be able to guess that by this photo, huh? This is the grain elevator in the nearby town of Cherokee. There’s no activity, no truck line, no weighing in or out, no farmers stopping by to sell wheat, no harvesters checking moisture samples – just a whole lot of nothing going on. Unfortunately, this year’s poor wheat crop has had a major impact on all aspects of harvest. This is just a glimpse of how most of the elevators look clear across the state – empty and vacant. 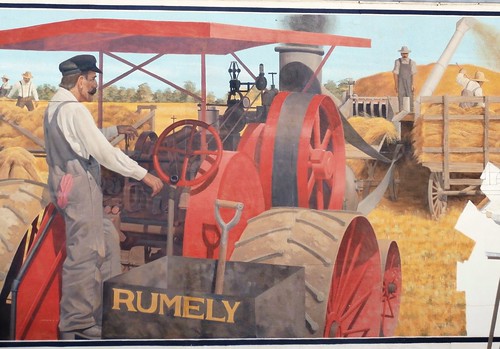 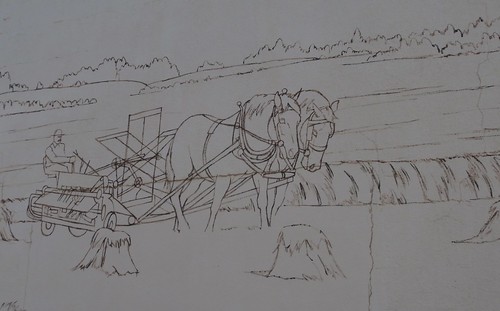 Mom found these awesome murals in Alva when she out for a grocery run. 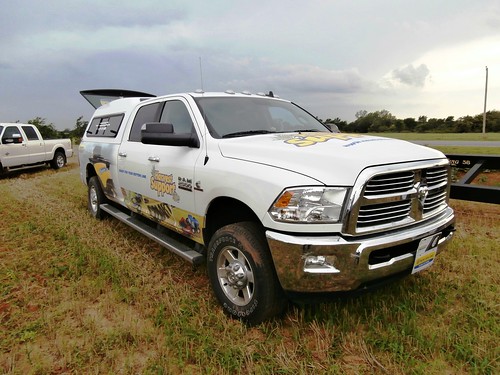 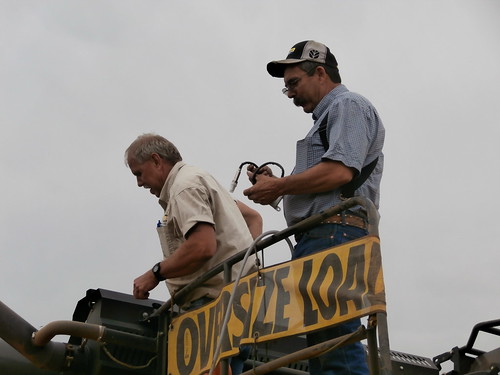 Monte and Dad replacing a new exhaust sensor on the combine. 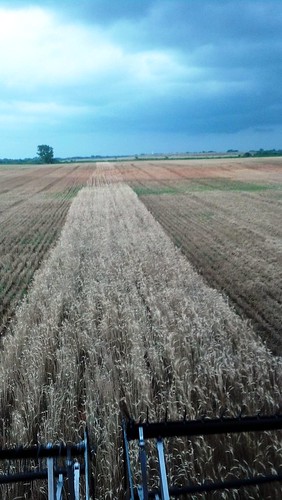 Finishing up the last pass in the field. 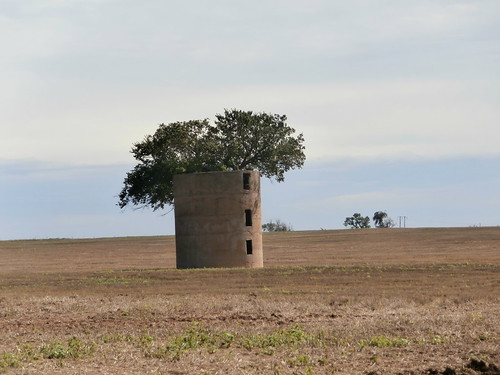 If only this old abandoned grain silo could talk… 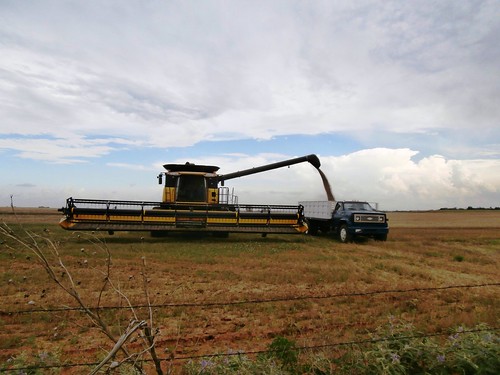 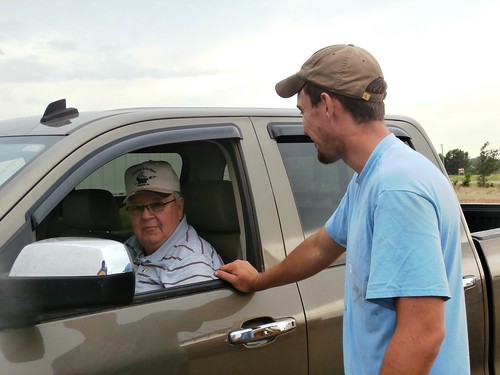 Agriculture runs deep in Neal’s blood as he is a 4th generation farmer. When Brandon asked Neal if he thought next year’s crop would be any better he simply replied, “You just have to have faith in good Lord upstairs.” 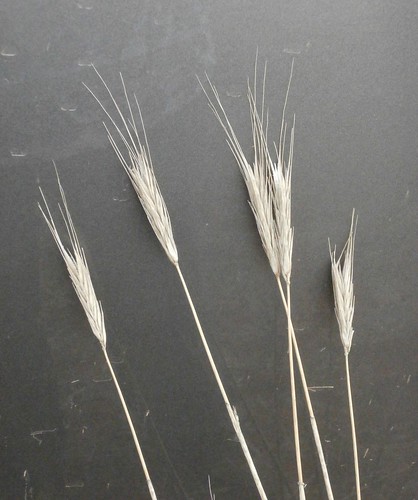 A close-up of the damaged wheat heads. 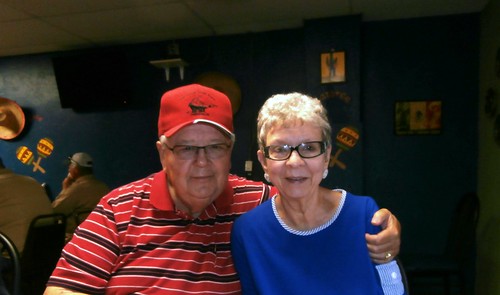 The crew had one last lunch with Neal and Mary before we loaded up and headed north. In their living room Mary has a sign that reads, “There is always, always something to be thankful for.” Living in the world of agriculture I think those are some wonderful words to live by. 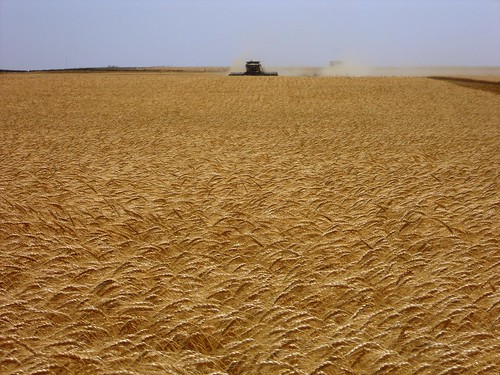 Blast to the Past – Flashback to 2012: In memory of Virgil Thorpe. Roland Harvesting combines one of Virgil’s fields outside of Helena. The yields that summer were around 50 bushels per acre. This year we have yet to see any wheat like this! Virgil was an avid reader of All Aboard Wheat Harvest and is truly missed by all who knew him.