All Aboard Harvest | Jada: Waiting on Green Wheat
8194
post-template-default,single,single-post,postid-8194,single-format-standard,qode-quick-links-1.0,ajax_fade,page_not_loaded,,qode-theme-ver-11.2,qode-theme-bridge,wpb-js-composer js-comp-ver-5.4.7,vc_responsive

After wrapping up harvest in Goodland, Kan., Hoffman Harvesting moved to Philip, S.D. on July 24. The move was long but uneventful. The stay in Philip however was short lived because the wheat was green. While waiting on the wheat, we moved to Pierre and harvested some wheat west of town. On the 27, we returned to Philip to harvest the wheat we were waiting on. 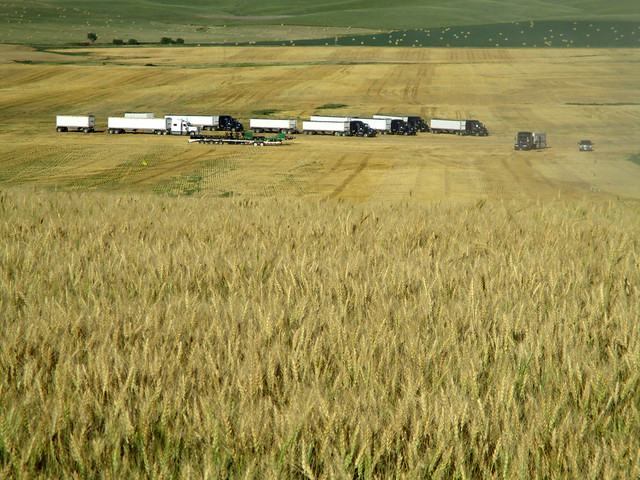 The South Dakota wheat harvest brought long lines and hauls due to train delays. To try to prevent waiting combines, we already have our trains hooked up. Usually we don’t need them until fall harvest.

Wheat is spotty in South Dakota. Some of the wheat is green and some is ready to cut. It all depends on when the wheat was seeded. Our next regularly scheduled stop- Gettysburg- is still green as is most of the spring wheat we plan to cut in South Dakota. For now, we plan to try to pick up work cutting wheat that is ready. 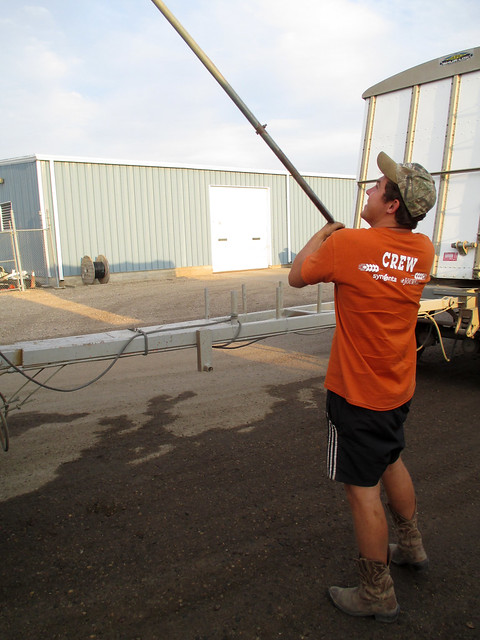 Theo untarps his truck and will settle in for an hour an a half to two hour wait before he is able to be dumped at Pierre. 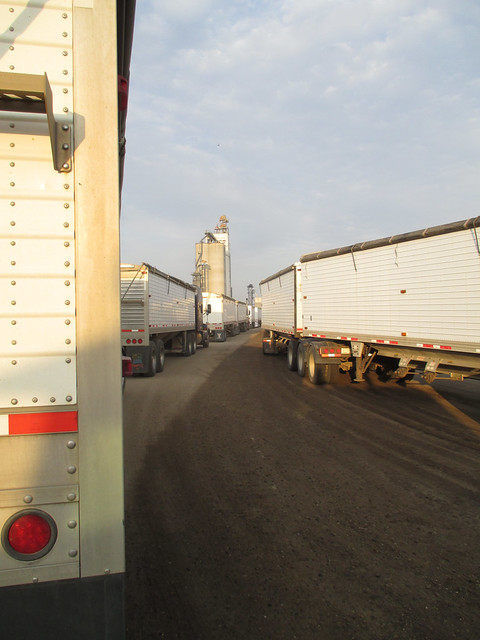 The view of the line before Theo’s truck.

The Pierre, Philip, and Fort Pierre elevators are already full and have long lines. They are struggling to get the wheat on trains to free up space because trains are delayed. We went home to get some more trailers and now have trains connected to our trucks to help us keep up with our combines. Usually, we don’t get them out until fall harvest. I noticed some other harvesters are doing the same. 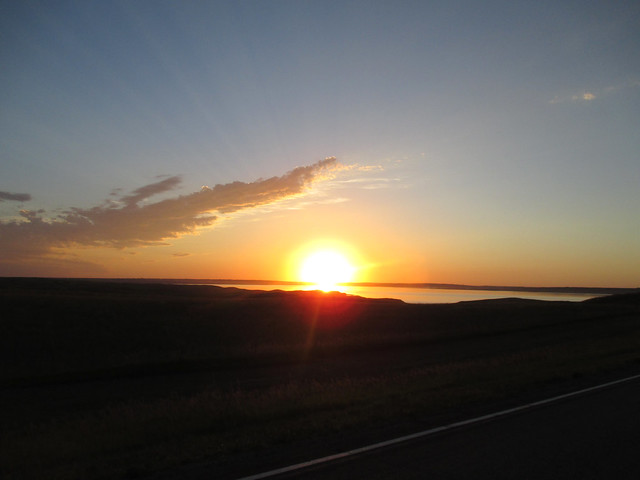 The sunset by the river. 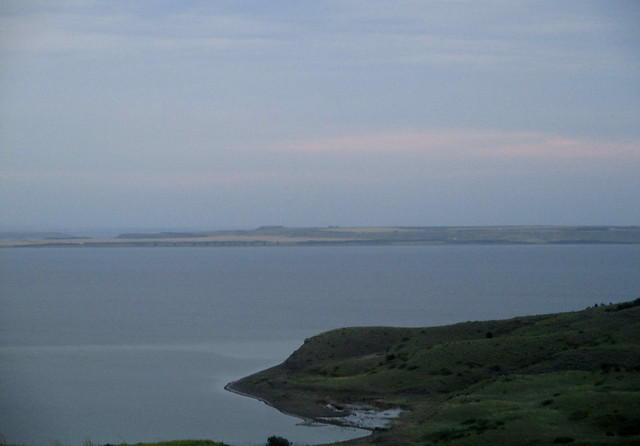 The view of where we were cutting in Pierre was beautiful and very remote. While  driving to our field, we drove along the Missouri river which had us feeling we should be on boats and jet skis instead of trucking. While harvesting in Philip, we took our loads to Onida even though the haul was 100 miles away. It was the closest elevator that has room for wheat but is now getting full too. Hopefully these problems will be addressed before the spring wheat turns or we will continue to have the same problems. 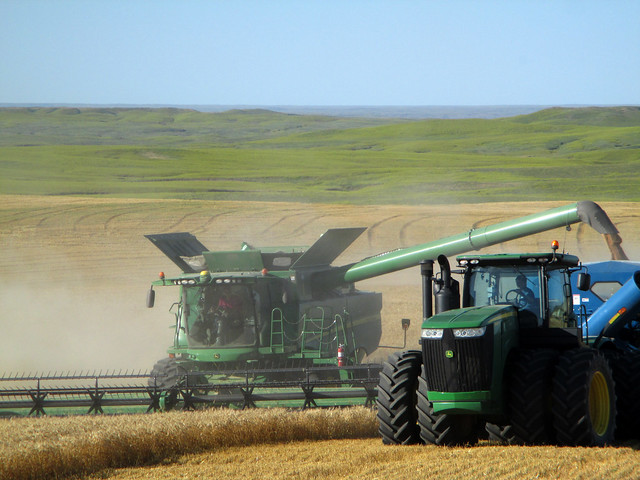 Austin dumps Leon on the go. With long lines at the elevator, a grain cart operator can quickly turn into a trucker. 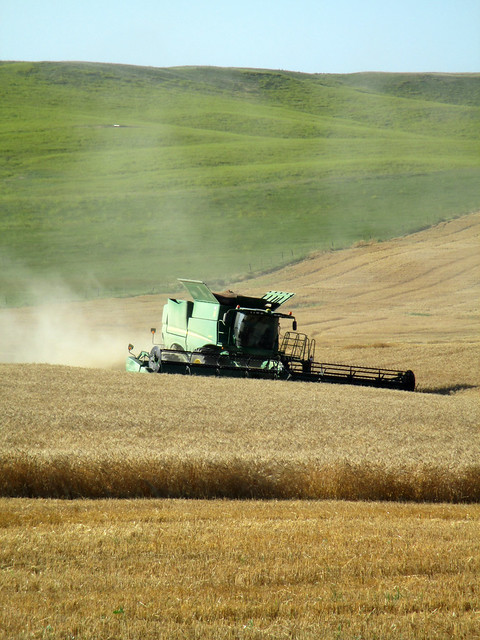 Alex cuts out a waterway. 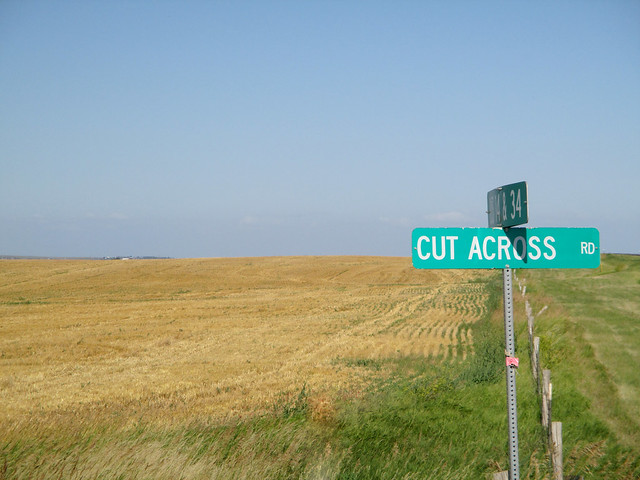 Yes, this field has been “cut across”- pun intended! I guess it was funnier on a 45 minute drive to the field to deliver food. 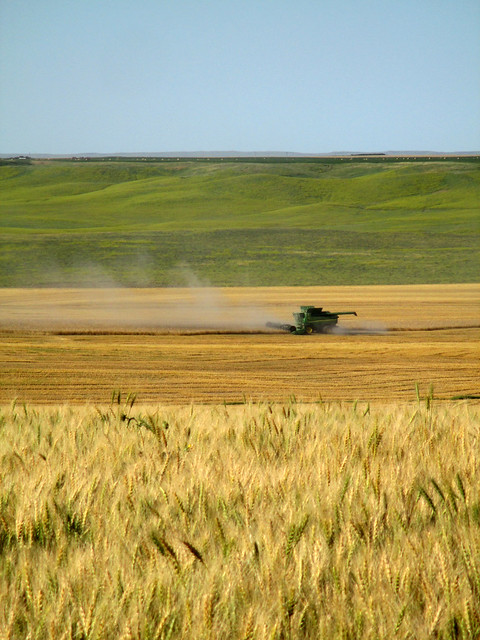 The wheat is spotty here in South Dakota. Green and yellow (ready) wheat are neighbors and even in the same field as is the case here.

All Aboard Wheat Harvest™ is sponsored by High Plains Journal and New Holland Agriculture. Jada can be reached at jada@allaboardharvest.com.