All Aboard Harvest | Megan: Wrapping Up Neb. Harvest
8230
post-template-default,single,single-post,postid-8230,single-format-standard,qode-quick-links-1.0,ajax_fade,page_not_loaded,,qode-theme-ver-11.2,qode-theme-bridge,wpb-js-composer js-comp-ver-5.4.7,vc_responsive

Chadron/Hemingford, Neb. – Roland Harvesting has spent the past two weeks trying to survive a fast and furious harvest around home. I was able to return back to Nebraska for a few days and spent much of that time helping out around Chadron. The crew remained split for about a week until they reunited near Hemingford. We’ve seen a wide variety of yields in the area. Unfortunately, some fields endured hail and winter kill which sunk the averages into the low 20’s. In contrast, many of the best fields yielded 70 to 80 bushels per acre with test weights around 60 to 62 pounds. Overall, Box Butte County (including Hemingford and Alliance) had an excellent average in the upper 50’s. Along with wheat we also harvested yellow field peas that yielded 50 bushels per acre. Just as the crew was beginning to harvest the peas a freak storm blew in at dusk. Bringing in heavy rain and hail, many peas were pummeled to the ground, causing a 25% loss of the crop. This is equivalent to losing thousands of dollars in profit.

Wheat harvest is currently wrapping up in the panhandle of Nebraska with just a few hundred acres of spring wheat for us to finish up. Spring wheat has been doing exceptionally well, making over 60 bushels per acre, and weighing around 63 pounds. In the upcoming week the crew will be split in many different directions. On the agenda is wheat to cut in the Casper, Wyo. area and malting barley near Worland, Wyo. Our final wheat stop in North Dakota will also be ready at the end of the week. 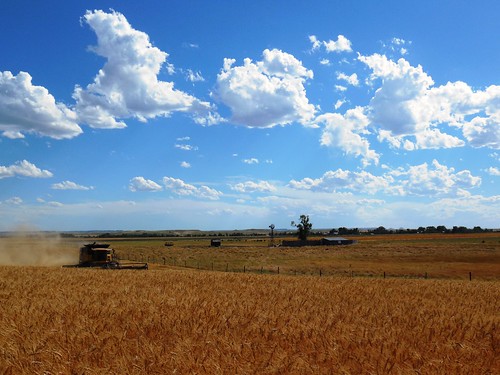 In my opinion, this is a “picture perfect” view of western Nebraska. A combine kicking up dust, a field full of bountiful wheat, a luscious green pasture, and a windmill rollin’ round and round…all that’s missing is a Husker flag! 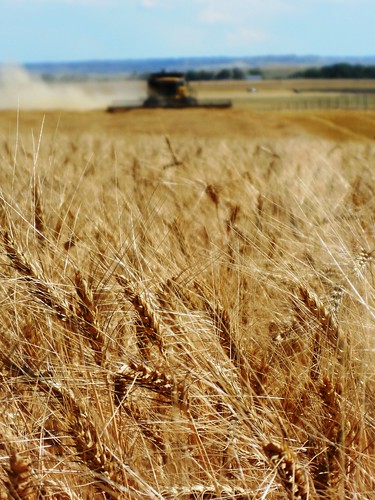 While trying to capture the fullness of the wheat one of the CR’s snuck into the photo. 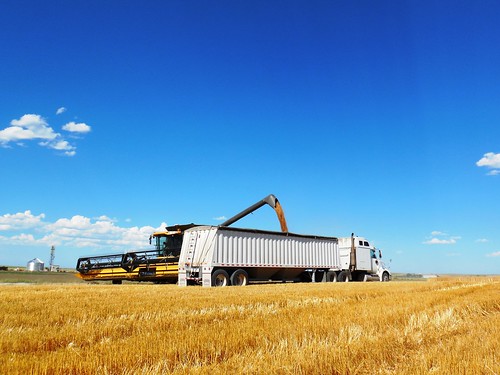 One of the combines stops to top off the truck. Bluebird skies, 100+ degree weather, and the infamous Nebraska winds have made for ideal harvest conditions the past couple weeks. 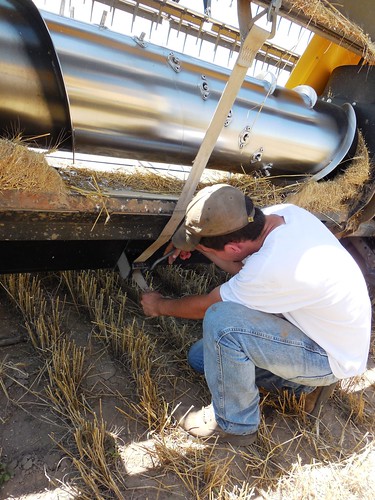 Brandon straps the header down before we move to another field. In the Chadron area we are used to wiggling in and out of fences and pulling over for bypassing traffic but sometimes it’s better to take the headers off all together, especially for the long moves. 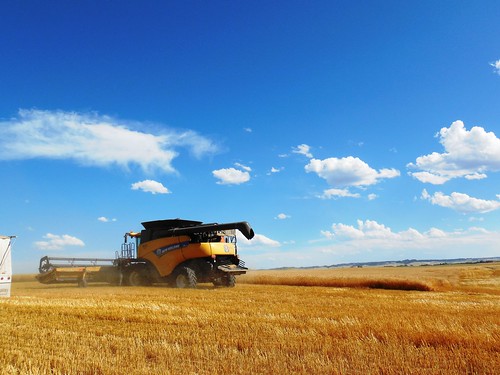 Getting another field opened up. 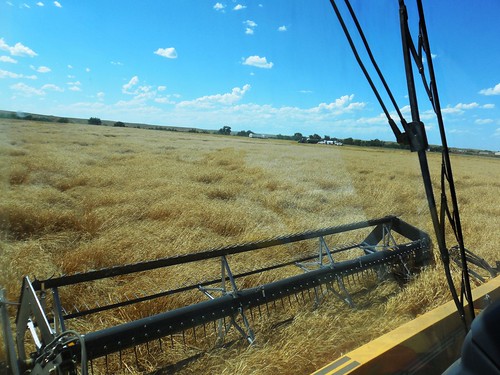 You’ll never hear a farmer or harvester complain about a header full of wheat!

When I was back in Nebraska Brandon made sure I received my “harvest fix” and had me help out every way possible. I was back to my MVP (Most Valuable Player) status – I was a trucker and hauled loads into to the elevator, shuffled vehicles around, delivered lunches, and hopped into the tractor/grain cart to keep the combines going. However, to my surprise, I spent most of my time running a combine. Sure, I’m a Roland and have been around combines since I was a baby but majority of my time in the field has been spent in the grain cart and trucking. With yields running in the upper 70s and much of the field having down wheat I knew I had to bring my “A Game.” 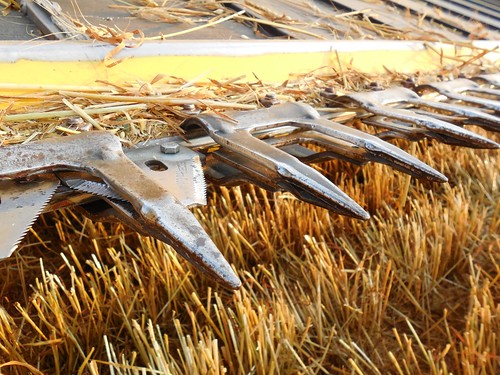 Easy fix, right? In theory, yes. However, the high yields kept the truckers running nonstop, making us short handed. Therefore, our service truck didn’t get moved to the new field with us. Oh, and remember how our tools (including the impact) were recently stolen? This job is slightly more tedious when done by hand. 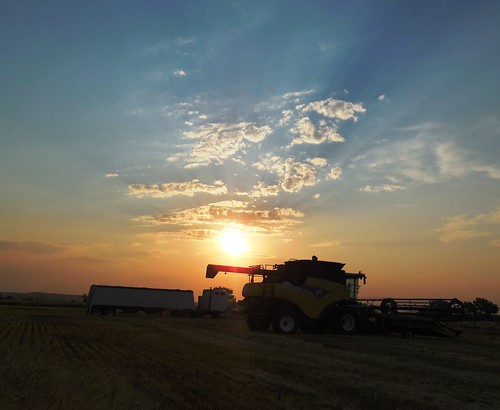 It’s a rare sight to see the combine parked before nightfall. It made for a beautiful photo, but man oh man, did I feel guilty that I was the one who broke it! 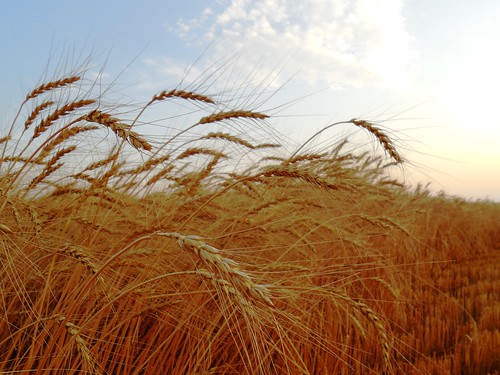 The only good thing that came out of this breakdown was a couple great photos. After a few minutes we were able to shuffle people around and get the service truck back into the field to fix my “oopsie.” 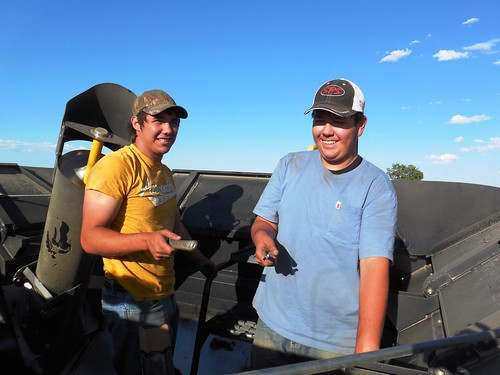 The following morning I made it almost 30 minutes before I sheared the concave shear bolt. I was thankful to have Jose and Justin come to my rescue. After this incident I was “breakdown free” for the next two days. Now, that’s something to celebrate if you ask me! 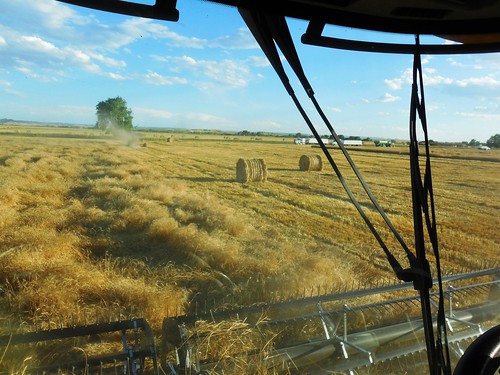 Much of the wheat around Chadron was down due to the tremendous crop and large amount of rain. In order to pick up the wheat we had to cut extremely low and utilize the pickup reels. 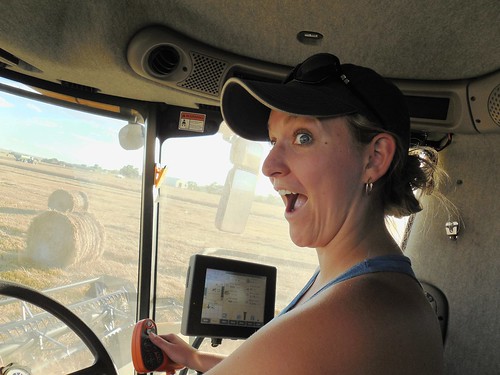 After my consecutive breakdowns Jose hopped in the combine cab with me to “supervise.” Instead, he stole my camera and snapped a bunch of silly pictures. Above, is a just a sample of his photography work. He named this one, “Crazy woman driver.” 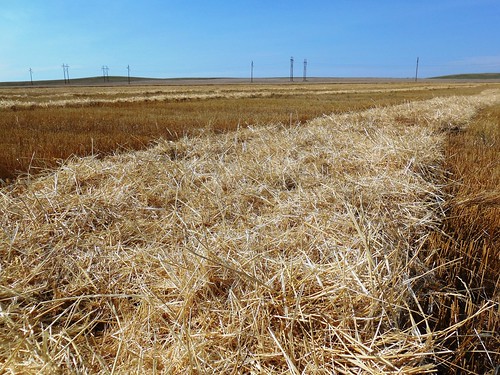 We windrowed the straw in many of the fields around Chadron and Hemingford. The amount of straw and bales produced was mind-blowing! 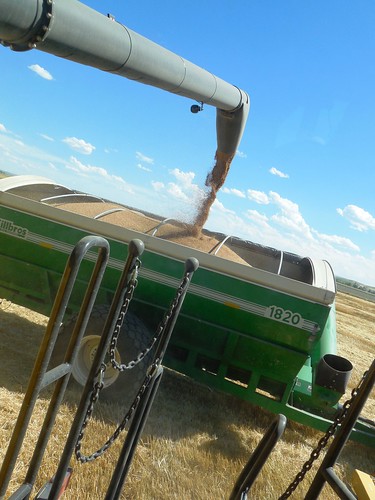 Topping off the grain cart while unloading on the go. (Photo was taken while I was riding, not driving!) 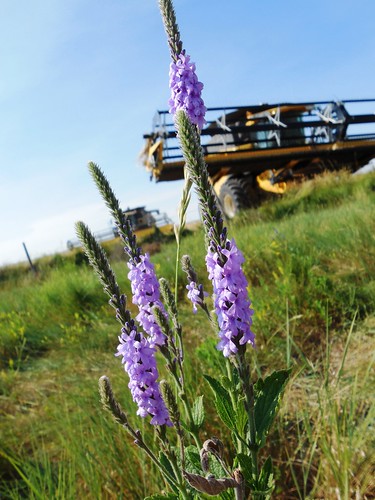 I found this pretty little prairie flower and had no idea the combines were going to photo bomb my picture. 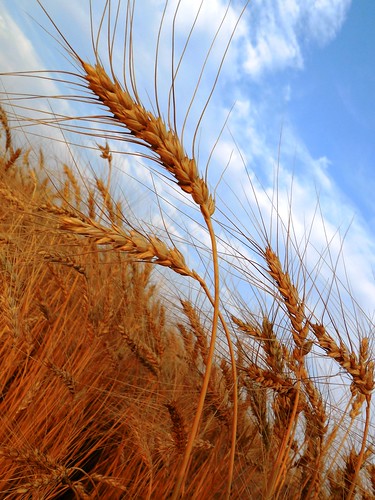 The wheat crop around home has been outstanding this year! 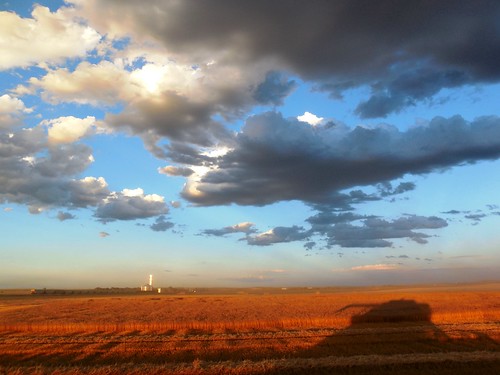 A perfect combine shadow and some amazing clouds to finish off the day.

We had another addition to our crew a few weeks back. Jake, who was an employee for Roland Harvesting over 10 years ago, joined the harvest run again. He spent two full summers on the road and has helped us out over the years. Jake is a “top notch” combine operator and has a strong trucking background. He is a great asset and we are happy to have him back for another season! 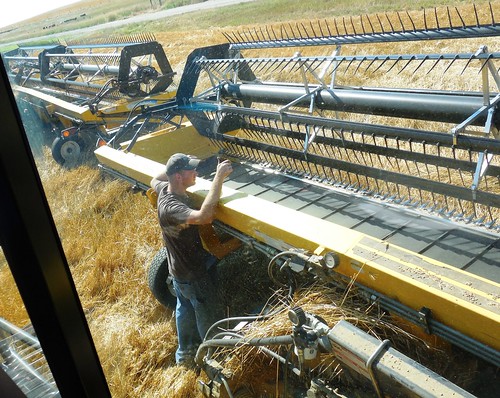 Jake is a little camera shy so I had to use my ninja skills to snap this one of him while we were servicing one morning. 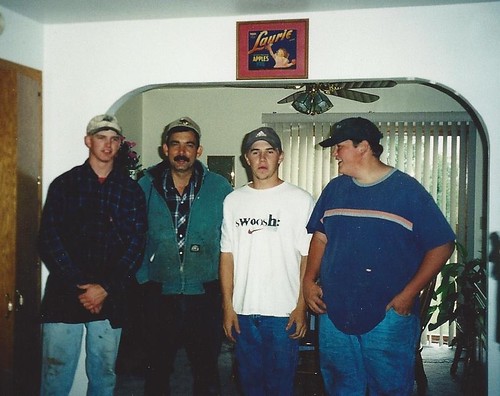 Blast to the Past – Flashback to 2001:  (Left to right) Jake, Dad, Quinten, and Troy made up the crew for Roland Harvesting during the summer of 2001. The last summer Jake worked for us Brandon was just 8 years old. Since Brandon and the boys are currently in their 20’s they have given Jake the nickname of Gramps and like to crack “old” jokes his direction. Luckily, Jake has a sense of humor and can hold his own against the “young pups.”