All Aboard Harvest | One of those days
8269
post-template-default,single,single-post,postid-8269,single-format-standard,qode-quick-links-1.0,ajax_fade,page_not_loaded,,qode-title-hidden,qode-theme-ver-11.2,qode-theme-bridge,wpb-js-composer js-comp-ver-5.4.7,vc_responsive

08 Aug One of those days

Hemingford, Neb. – No matter what type of work you do, every day has it’s ups and downs. But we’ve all had those days that are just plain miserable and continue to get worse and worse while quitting time seems to drift farther away. Roland Harvesting recently had one of those downright awful days that was so terrible it lasted overnight and into the next morning.

Since Ashley and I are no longer on the harvest trail it’s very common to receive family group texts. Sometimes they’re of funny crew pictures, beautiful sunsets, or horrible breakdowns. The process keeps us in the loop of harvest and we truly empathize with anything that occurs.

This particular day was an extremely long day of work for myself at the hospital. Upon walking out of work I checked my phone and noticed an extensive group message I had been missing out on. My jaw dropped as soon as I began scrolling through the pictures. Although the following photos are only of cell phone quality, I figured they are worth sharing with you all to help illustrate the story. 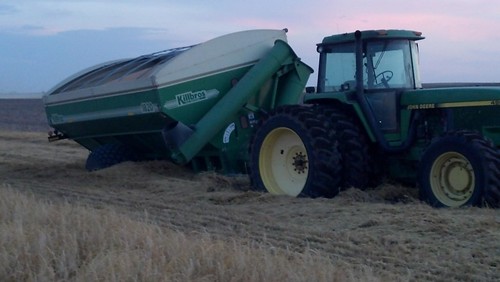 The whole fiasco began when the grain cart operator thought he had blown a tire. He stopped to check and that was when he noticed the loaded grain cart buried in a mud hole.

Dad was in the combine across the field so he stopped to talk the grain cart operator through the process of getting it out. As soon as Dad lost momentum he felt the combine start to lean to the right and he knew he was in trouble. 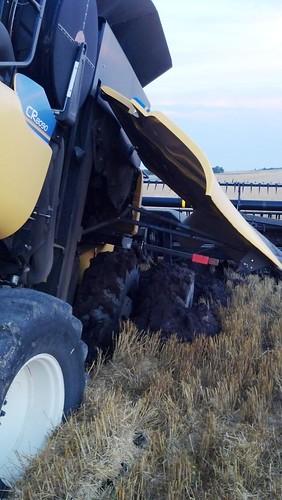 After a few pulls on the hydrostat the CR didn’t move an inch. Upon hopping out of the combine this is what Dad found. 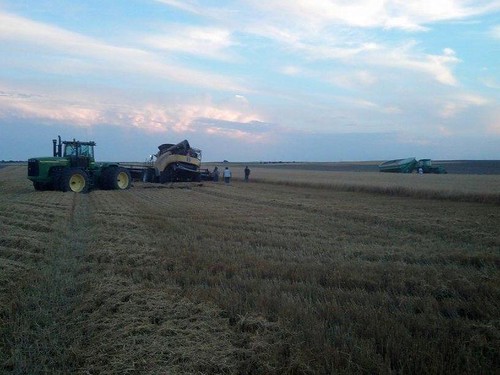 Using the farmer’s four-wheel drive tractor and tow rope they tried to pull out the combine but it wouldn’t budge.

Luckily, the tractor was able to pull out the grain cart. Since this all transpired at dusk, Dad decided it was better to wait until morning to get the combine out in daylight so nothing would be damaged in the process. Mom, Dad, and the crew said it was a restless night filled with lots of fretting, tossing, and turning. 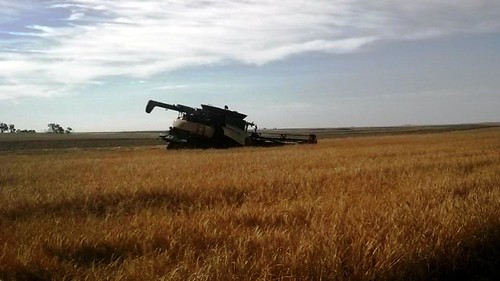 Showing up to the field early the next morning the crew was greeted by this unpleasant sight. 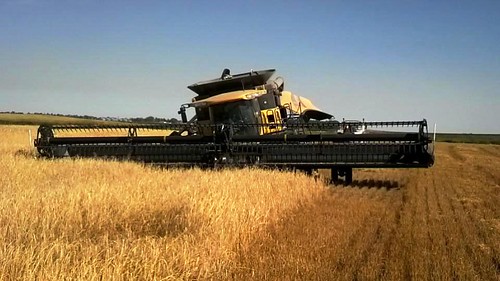 The combine had indeed sunk even deeper overnight. 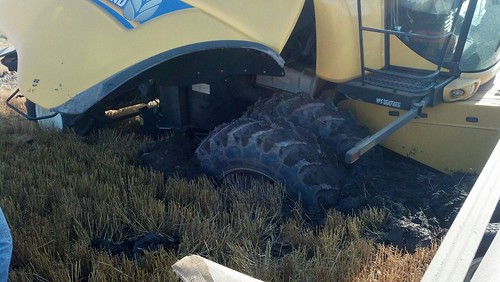 The combine was buried so deep that the side shield could barely be opened because it grazed the ground. 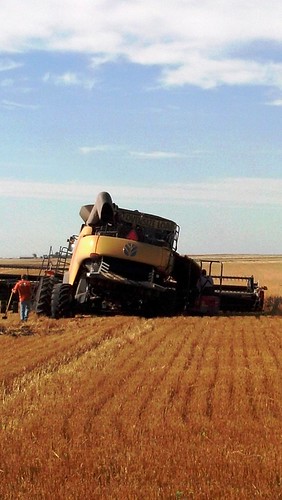 With 8 inches of rain in the last 60 days prior to harvest, the soil was completely saturated. It was more like quicksand than actual mud. 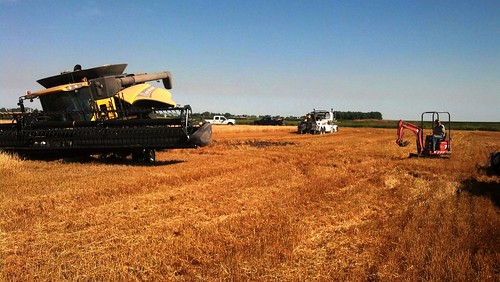 The crew began digging out around the tires using hand shovels and a
mini excavator. They also dug the mud out from under the clean grain elevator and the cleaning fan. This was done to prevent tearing up the underside of the combine as it was pulled out. 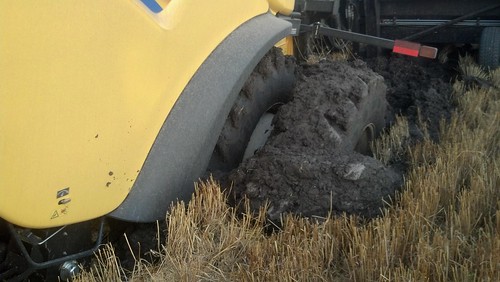 To put this in perspective the drive tires you see are about 5 foot tall. Is there maybe a foot and a half free of mud? 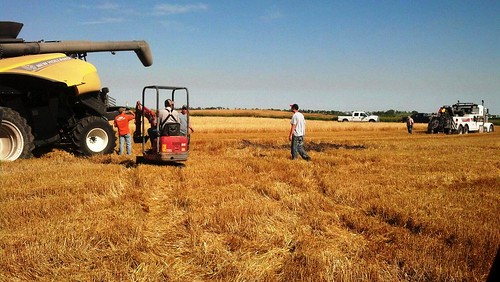 After digging out the tires, Dad called in a local heavy tow truck to come winch out the combine. 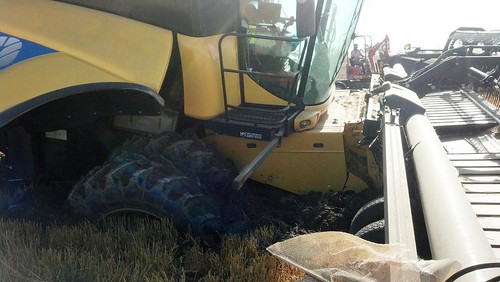 The grain tank was over half full of wheat increasing the weight of the entire load. Between the grain, combine, and header this whole rig weighed close to 60,000 pounds! 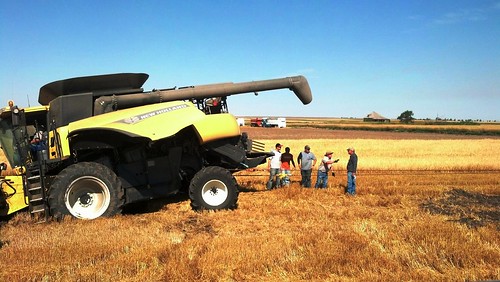 A few hundred bucks and 12 hours later the combine was FINALLY pulled out! It was certainly a group effort to get ‘er done. Thankfully, the combine remained damage free throughout the entire ordeal. The mud hole filled with over a foot of water after the combine was removed!

A children’s book by Judith Viorst summarizes perfectly: “It was a terrible, horrible, no good, very bad day.” Roland Harvesting is glad to have this kind of day behind us and feels blessed to have had a positive outcome. Here’s to a mud-free future for the rest of harvest! Oh, and in case anyone is wondering… In 35 years of harvest this is the WORST Dad has ever been stuck!