What a faith tester these past couple weeks have been! In a previous post I talked about how lucky we are to have had rain and that we actually have wheat around to harvest. I still stand by that statement and I am very grateful the rain has come, but if I had it my way, it would not have come in one day. On May 23, Elk City and surrounding areas were hit hard with rain. The measurements are all over the board as to how much we actually received, but I can tell you our measurement was over 13 1/2 inches within a 20-hour period. Oklahoma has set an all-time record. Some are saying this is a 100 year rain. Unless you are very young, I don’t think we are going to see this again. Let me tell you how this all started.
The rain started around midnight, went through the night and continued throughout the day. Around 10 a.m., we decided to go outside and take a look around. To the north of us, there is a pasture. It had been replaced by lake. We did not realize it had rained so much. There was no torrential downpour to make us suspect such water. I guess it was just a constant, steady rain that caught us all by surprise. After the shock of such a sight, Dan and I rushed to the east to see if our equipment was all right. Our pick-up heads were nearly half buried in water. The next 30 minutes were a mad rush to pull them out before it engulfed them. When we started, the water was just over ankle high, and when we pulled the last heads out, it was thigh high. Thankfully we arrived in time and were able to get them out. The heads were basically creating a dam, holding the water near our place. The water came within 1/2 inch of coming into our house before the problem was solved. We were lucky.

Many people were not so lucky. Elk City was not the only one hit. The whole state of Oklahoma and also Texas were hit hard. If I were not here to see it, I would never believe it. Here are a few pictures to help describe this phenomenon. 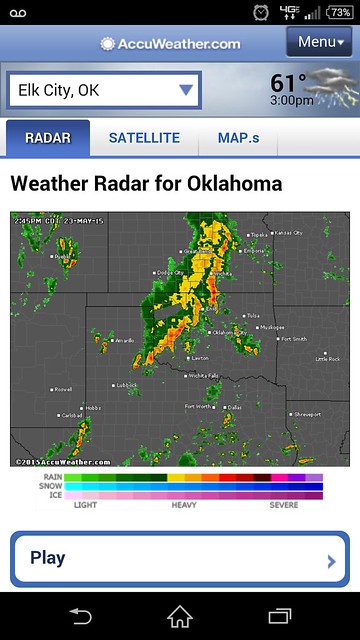 The storm just sat there, not moving an inch for hours on end. 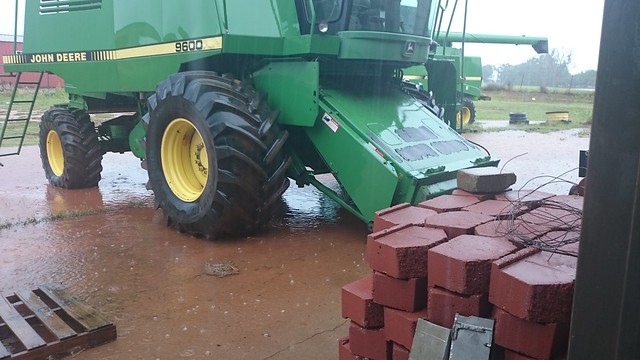 The first picture I took outside the shop door. It doesn’t look like much, but the water was just coming onto the cement pad. 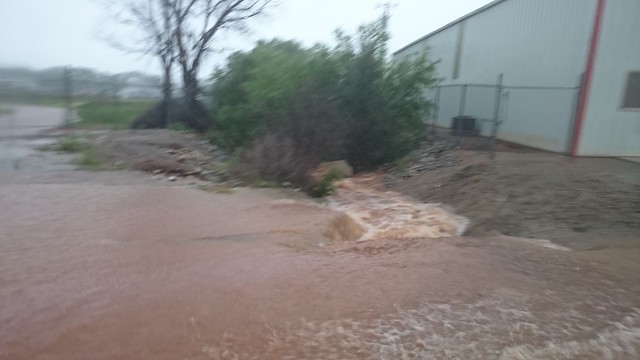 This was just down our road. We drove through 10 inches of water to get to the main road. 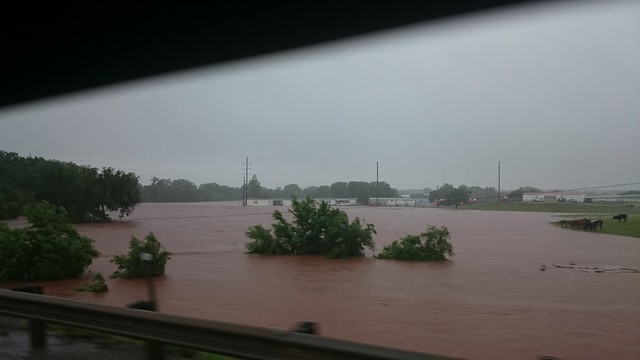 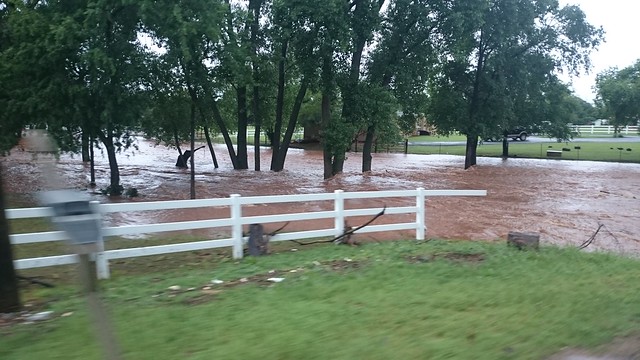 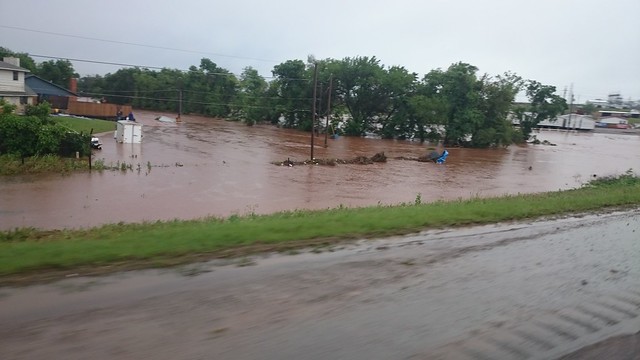 People have lost their lives, including three firemen trying to save those stranded. Some are still missing. There were many people who lost their house and belongings—one of those being my sister, Katie, and her family. The past couple of weeks, my family and I have been helping them clean up, dispose of trash and furniture, and attempt to save all we can. They are currently living with us for the time being, until they can afford and find another place. She and many others are in the same boat. Western Oklahoma does not sell flood insurance. We are nearly in a desert zone so to think we would have a flood is unbelievable. 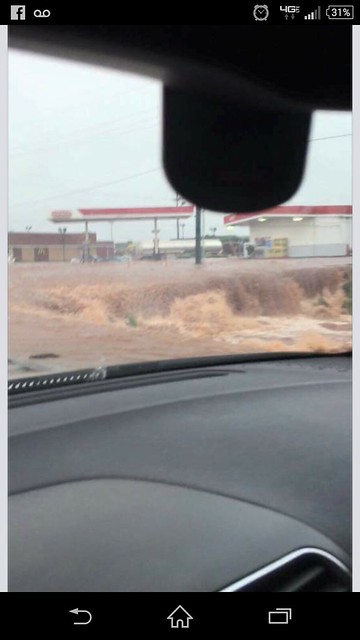 This is a gas station a block from my sister’s house. 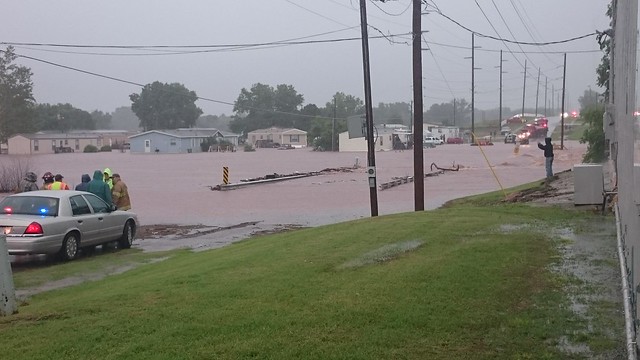 The blue house you see toward the left is my sister’s house. 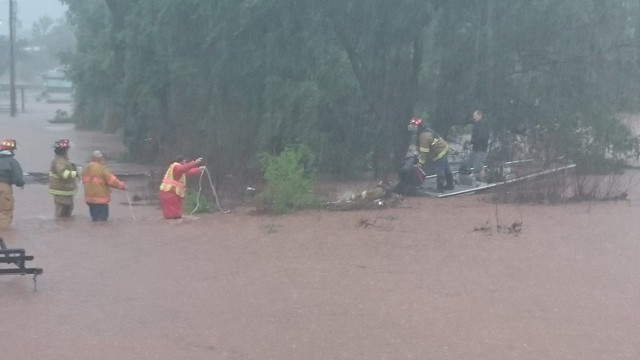 There were people still inside some houses who firefighters were trying to rescue. 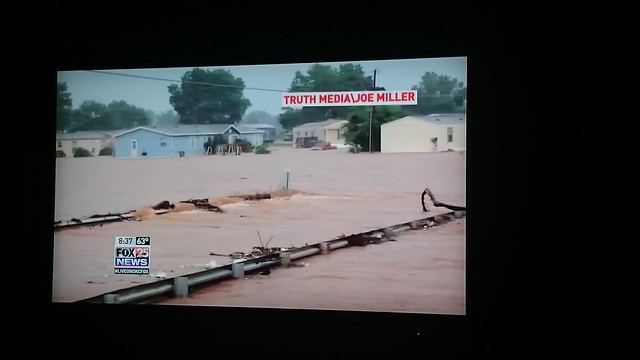 This is a picture of my sister’s house on the news. 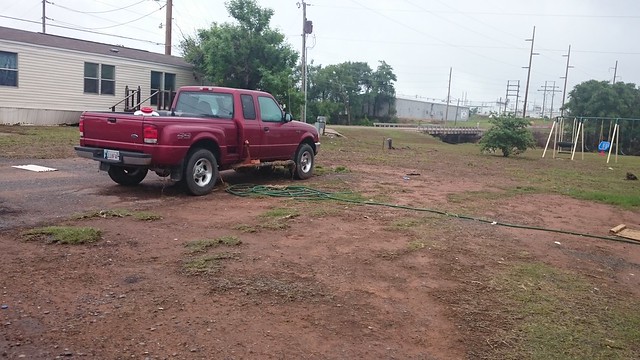 Just as fast as the water came, it left. The water was up to the bottom of the windows of my brother-in-law’s pickup.

Our faith was tested and bent once again, but it is far from broken. All we can do is our best, and God will do the rest. We can clean, we can pray, we can recover. Please pray for the victims, their families, for Oklahoma and Texas.
I have to end on a happy note, though: At least our lakes, rivers and subsoil moisture are back!

Be safe and God bless.