All Aboard Harvest | Wet wheat and a day in the city
8992
post-template-default,single,single-post,postid-8992,single-format-standard,qode-quick-links-1.0,ajax_fade,page_not_loaded,,qode-theme-ver-11.2,qode-theme-bridge,wpb-js-composer js-comp-ver-5.4.7,vc_responsive

Wet wheat and a day in the city

17 Jun Wet wheat and a day in the city

Shattuck, Oklahoma—Well, folks, we tried it yesterday. And it’s still too wet. On the bright side, the weather forecast for Shattuck looks like it’ll be hot and dry for the next week or so. Late yesterday afternoon, the moisture tested at 14 percent. Test weight is 52, which is very poor. The elevator closest to the field won’t accept such a low test weight, so when we do get to harvest the wheat it will have to be hauled to the Shattuck elevator almost 20 miles away. The high humidity and clouds we’ve got today don’t help with the drying process.

Tomorrow marks one week since we pulled into town. Callie and I are starting to go stir crazy. We were able to convince Mom to take us to Oklahoma City on Monday. We visited the Channel 9 News station and hung out with Leslie Smith, the farm broadcaster for K101. After a full tour of the station, Leslie even did an interview with me regarding this summer’s harvest and my work for All Aboard Harvest. If you’re interested in her article and our interview you can find it here.

After the news station we made our way downtown to tour the Oklahoma City National Memorial and Museum. It’s been quite a few years since we were there. This winter Callie did a big presentation for her American Experience class about the OKC bombing, so it was interesting revisiting the site after she had done so much research about the event. If you’ve never made it to the memorial and museum, I highly recommend making the trip. It’s extremely moving and informative.

On our way home that evening we took Route 66 to Elk City to visit the Misener crew. Man, I love those guys. They’re always so inviting and make sure we’re fed and taken care of. And you can almost always guarantee they have a place for you to sleep if you’re too tired to make the trip home. We visited for a few hours and made it back to Shattuck around 1 a.m. It was a bi-i-i-g day! I think after such a big day that was the best I’ve slept since we’ve been here.

Mom and Dad will try the wheat again this afternoon. Oklahoma is in need of prayers. We need prayers for dry wheat, prayers for protection from flooding and prayers for safety in the field. I hope we can get into the field today and get that wheat out! 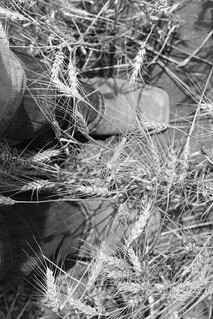 You can see the sparseness of the wheat by this photo looking down at my boots. It just isn’t very thick. 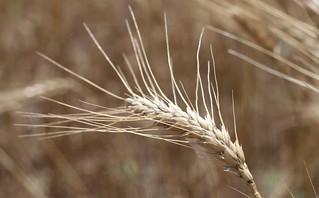 The wheat heads are long and look good but the berries inside are shriveled up and light. 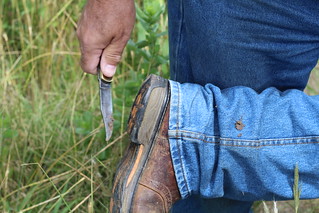 After walking through the field Dad had to scrape mud off his boots. Definitely not a good sign when you’re looking to harvest. 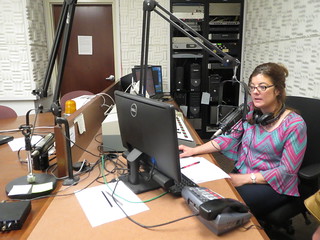 Leslie Smith grew up in Colorado, worked in Scottsbluff, Nebraska, for a while and is now in OKC working as the farm broadcaster for the greater part of Oklahoma. Such a nice gal! 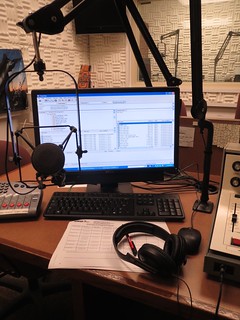 This is where the farm broadcasting magic happens! 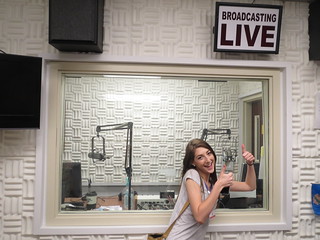 Callie, who is going into her senior year of high school, has expressed interest in broadcasting. She really enjoyed the tour and learning more about it! 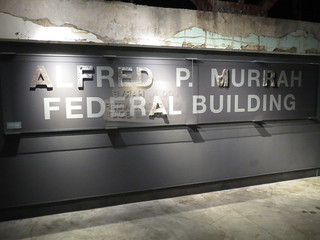 On April 19, 1995, The Alfred P. Murrah Federal Building was bombed by a “homegrown terrorist”; 168 people lost their lives and many, many were injured and impacted. This exhibit shows the only remaining letters found in the rubble from the original sign outside of the building after the bombing. 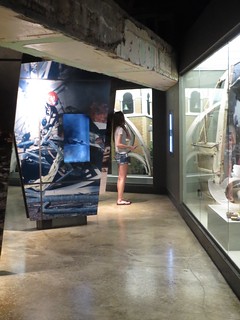 Callie led the way through the museum, stopping on occasion to pull me aside and point out an interesting piece of information she thought I should read. 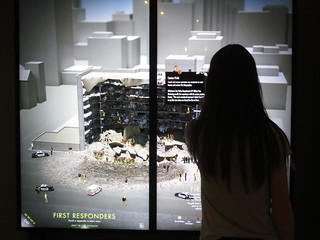 This interactive screen enabled visitors to click on different people and learn about their role in search and rescue. Behind Callie you can see an animated image of what the Murrah Building looked like following the bombing. 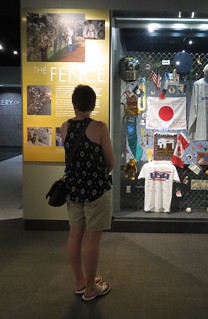 Mom has been through the museum at least three times now. Each time it doesn’t get any easier. In the above photo she was looking at a small piece of the chain link fence that originally was around the perimeter of the site, keeping people away from the impacted area. After being set up around the bombed building, the fence soon began collecting emotional memorabilia in remembrance of the many children and adults killed. 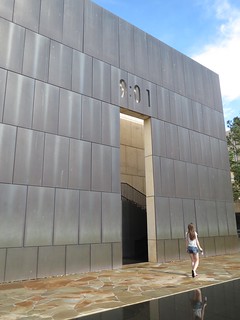 9:01 a.m. marks the time of the bombing, when the country was innocent. At 9:01 the Murrah federal building was buzzing like a beehive. Office workers sat at their desks, meetings were in session and the last couple kids were dropped off at the daycare housed on the second floor. Sitting to the east of the 9:01 memorial lies a reflection pool. The pool lays the length of the street that was in front of the building where the bomber parked the U-Haul truck that carried the homemade bomb. At the end of the short street sits the 9:03 memorial, almost identical to the one above, the time that marks when the country was changed forever. 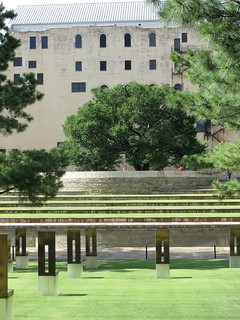 Nine rows of chairs sit where the Murrah building used to stand. One hundred sixty-eight chairs, large chairs representing adults and small chairs representing children, face north toward the reflection pool and the Survivor Tree. The Survivor Tree is an American Elm that stood strong on that April morning among burning cars, blasted out windows and crumbling buildings.