All Aboard Harvest | One step forward, two steps back
9201
post-template-default,single,single-post,postid-9201,single-format-standard,qode-quick-links-1.0,ajax_fade,page_not_loaded,,qode-title-hidden,qode-theme-ver-11.2,qode-theme-bridge,wpb-js-composer js-comp-ver-5.4.7,vc_responsive

The last few weeks have been filled with several unexpected twists and turns for Roland Harvesting. Bear with me as I bring you all up to speed on our harvest season thus far.

On June 4, Brandon, Justin and new crew members, Joel, Ben, and Aaron (Tiny), headed south with the last of the equipment.  Since two of the combines and a few trailers had already been dropped off, the trip went by quickly without a hitch. Dad stayed home for a couple of days to finish planting fall crops then booked it south to join the madness.

Upon arriving near Duke, Oklahoma, the crew hit the ground running. They were able to jump right into cutting and knock out several hundred acres in a short amount of time. They ran extremely long hours and spent many nights working until 2 a.m. or 3 a.m. The wheat in the area yielded around 20 to 30 bushels per acre with lower test weights due to the late rains. Surprisingly, the moisture stayed down as the weather turned hot and stayed sunny with temperatures in the upper 90s and lower 100s. Gotta love favorable harvest weather!

Unfortunately, this productive stretch came to an abrupt halt. On June 11, our brand spanking new CR 8090 (with 39 engine hours and 22 separator hours) was cruising along in the field when suddenly Dad noticed the oil pressure gauge bottom out. Dad thought nothing of this, assuming it was a sensor problem. Upon stopping and opening up the side hatch he was shocked to see engine oil blown all over the machine. Turns out, in less than 45 seconds all the of the oil had drained out of the combine.

Since the combine was still under warranty, we were covered by Top Service. Two days later the local dealership we had purchased the new CR from brought out a replacement combine for us. Irony twist for you all—this exact machine was our old 8090 we had just traded off this year. It was an excellent machine but we always work our combines hard. We had traded this one off as it we had put a ton of hours on it the past couple years. A little life lesson from my parents came back around in full circle with this situation. We were raised to always take care of things because you never know when you’re going to see them or need them again. In this case, we certainly needed it as we are currently still using our old machine as our new CR 8090 remains out of commission.

The day after our new combine went rogue on us the rain set in. The wet weather shut us down and after three days of rain we were forced to split the crew. Dad and Ben remained in the Duke area with one combine and a truck to finish up. Meanwhile, Brandon and the rest of the crew headed north to our next stop in Carmen, Oklahoma. If we had not faced complications with our new combine, we would have been able to knock out everything near Duke and move together as we had originally planned. Although, we all know how harvest plans work out—they’re just tentative ideas that change about 20 times a day! During all these complications our loyal customers were very supportive and understanding, allowing us time to get caught back up.

Another problem we faced during our first stop was that Harvest Support did not arrive to Altus, Oklahoma, until after June 15. Due to complications, they missed much of the run down south and in turn, left Roland Harvesting and many other crews in a scramble during breakdowns. Luckily, we run three machines that are alike so we are able to carry a decent supply of parts to get us by. It certainly helps that Dad is an incredible mechanic and can fix just about anything (besides computer problems) on the combines. When you’re in the dead heat of harvest and a combine breaks down, you use whatever it takes to make it run so you can get back into the field. This is exactly what we had to do multiple times. However, when Harvest Support made their grand entrance all of the crews welcomed them with open arms. Upon arrival Monte and Chase put in many long hours, making sure everyone was squared away. Harvest Support is an easily accessible resource that is beneficial for everyone on the harvest run. We’re relieved to have them back on the road with us! 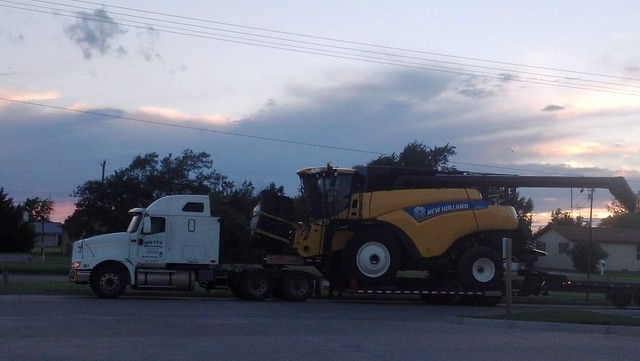 Getting the last combine moved down south. 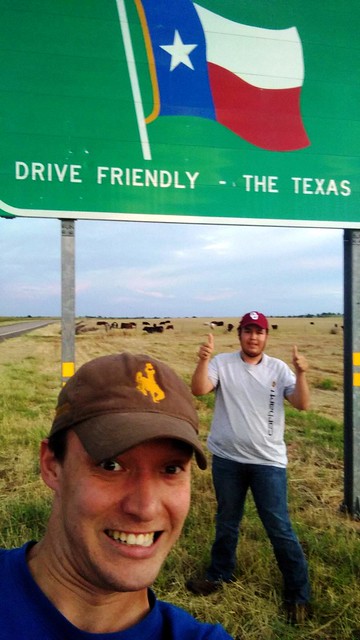 A selfie of Brandon and Justin in front of the Texas state line! 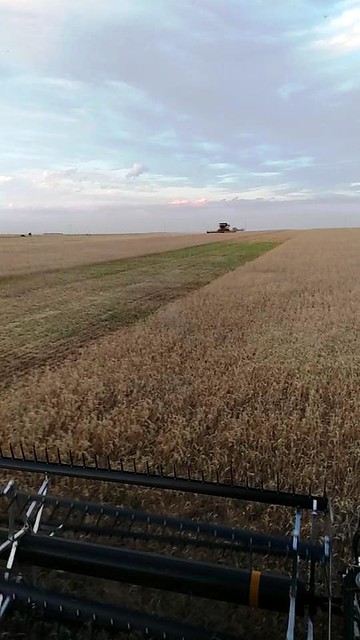 Back in the saddle again! Due to the late rains this spring, grass and weeds began to pop up in many of the fields. 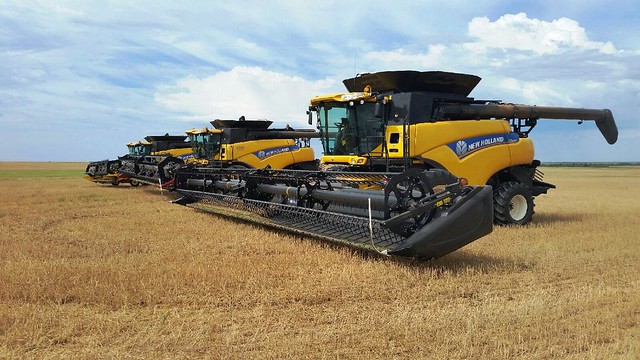 The three bumblebees all lined up at attention. 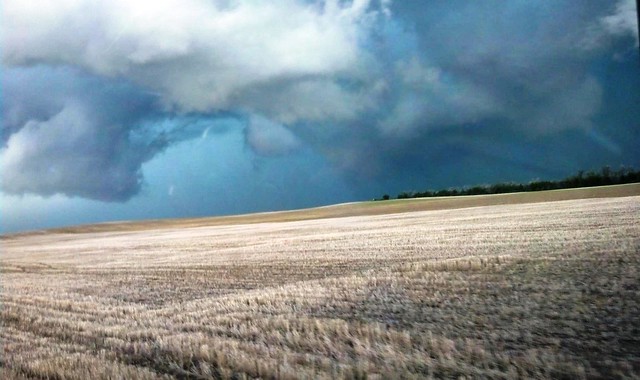 Dad captured these gnarly looking clouds. Luckily, this storm by-passed our field for the night. 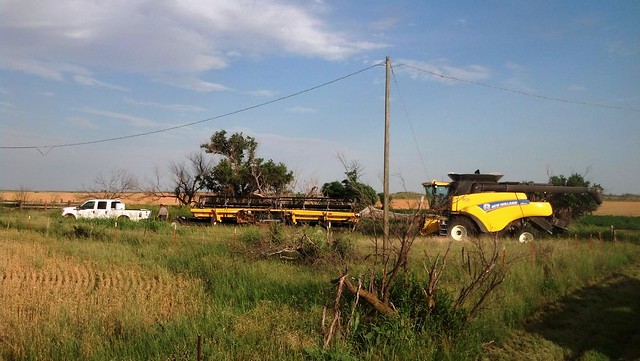 Part of the crew moving to a new field. It’s extremely challenging to squeeze through small gates with our 40 foot headers so we often take them off between fields. 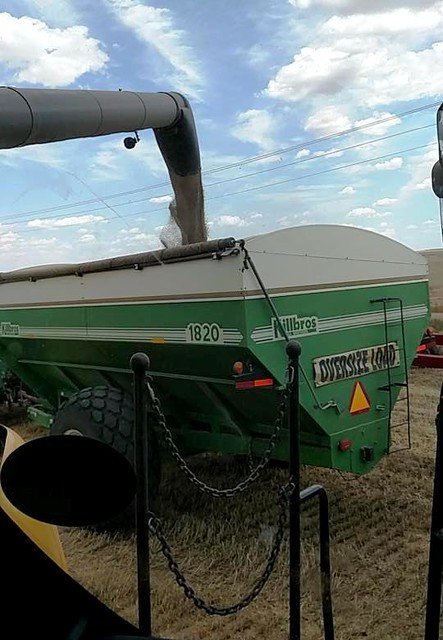 A quick stop to unload on the grain cart. 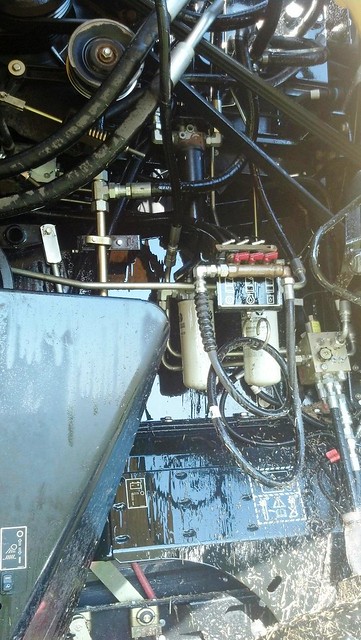 This is the view Dad was greeted with when the new CR broke down. 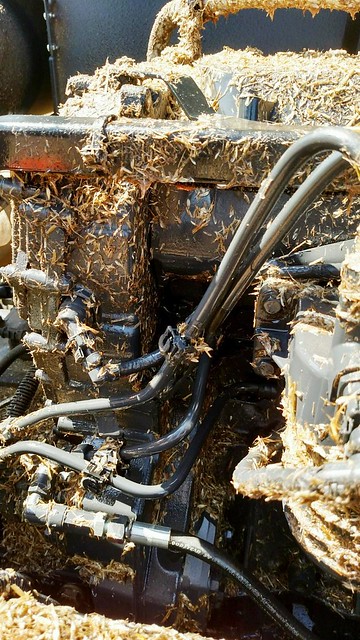 Engine oil and chaff are the best of friends. 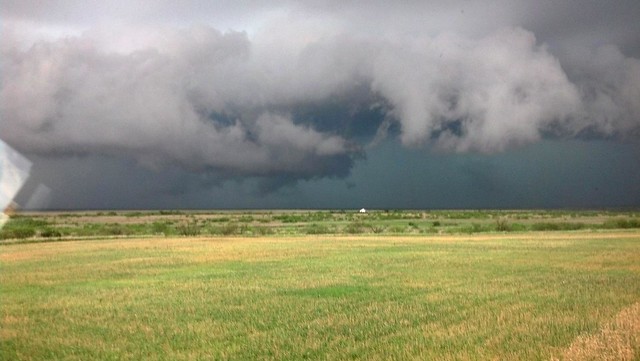 These clouds brought the rain that shut us down for a few days. 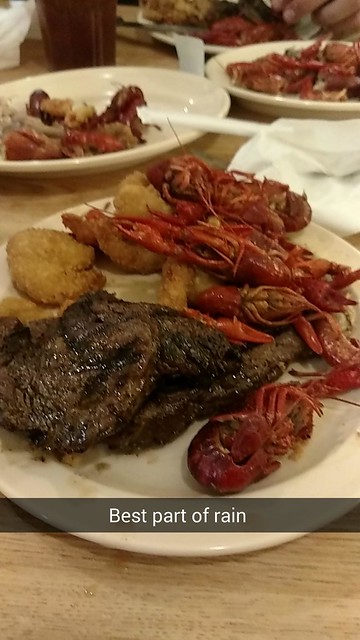 Brandon sums up the perks of a rain day.