Growing up in rural Nebraska means that riding and driving are learned from early ages and quickly become the norm. This mentality has carried over into my adult life as well. So, it was no surprise when I got off work the morning of July 2, hopped into my Jeep and hit the road. I headed back a few hundred miles to the farm in Hemingford, Nebraska, where I met Mom and Dani, Brandon’s girlfriend. We threw our bags in the back of the pickup, hooked up to the Shelbourne stripper header and began our journey south.

On June 30 Dad and Ben moved from Perryton, Texas, to Hoxie, Kansas. Unlike many years, this stop was short and sweet. The cutting was great and the wheat averaged right around 45 bushels per acre. Mom, Dani, and I pulled into Dad’s last field just in time to see the combine make its final round.

Meanwhile, Brandon and his crew finished up near Amarillo, Texas, and began the trek to southern Nebraska. After encountering many complications they finally made it Colby, Kansas, late in the evening. The following morning Brandon’s crew dropped off their equipment in Imperial, Nebraska. All of us then piled into the pickup and semis to double back down to Texas to finish jockeying the rest of our machinery.

We loaded everything up in Texas in record time but sadly did not make it as far north as we had planned. Temperatures soared well over 100 degrees on the day of our move, with no wind, making it a long hot, haul. Because of this we didn’t make as much progress as we had hoped. This meant we were left traveling through all of Kansas and much of Nebraska on the Fourth of July. I had the pleasure of hauling the tractor and grain cart, which was a nice switch up to playing pilot car in the pickup. About midmorning the convoy was making our way through Scott City, Kansas. We immediately noticed folding chairs and energetic families lining the main street. As the first child threw his arm up and began to motion for me to honk I quickly realized a Fourth of July parade was about to start and the kids were convinced we were part of it. With our flashing lights already engaged, signifying our oversized loads, the children yearned to hear our air horns as well. Of course, we couldn’t disappointment so our whole convoy laid on the horns and showed off our farmer waves as we rolled down main street, parade style. Clapping and cheering accompanied us throughout the entire town. The only thing that would have made it better was if we had candy to throw out the windows!

We continued hauling north and finally pulled into Imperial, Nebraska, midafternoon where we unloaded the combines in the New Holland parking lot. The general consensus from our farmer was that the rest of our day would be filled with sampling and an unlikely chance of getting going. Dad made the executive decision to take the afternoon off and hit it hard in the morning. My sister and brother-in-law, Ashley and Kurt, had made a 1,000-mile trek from northern Montana to come catch up with the crew. We ended up meeting them in Holyoke, Colorado, and spent the evening of the Fourth of July watching fireworks in the park and enjoying some much needed family time.

The next morning I started the long voyage back to Wyoming as the crew fired up and got a couple hours of good hard cutting in. The next few days were filled with cool, damp weather, making it difficult to get going strong. Once the sun made an appearance the acres around Imperial, Nebraska flew by. The wheat yielded between 40 to 60 bushels per acre with test weights hanging out around 59 to 60 pounds. Moisture in the late spring is ultimately what helped save their crop. Due to the cool, damp weather the farmers who sprayed with fungicides had significantly better yields than those who did not.

Due to many technical difficulties with my camera during this trip, my photos were cut short. I will be joining the crew back home around Hemingford, Nebraska next week and will be sure to catch up on photos then! Roland Harvesting moved to Chadron, Nebraska, a few days ago and is cutting away like crazy. 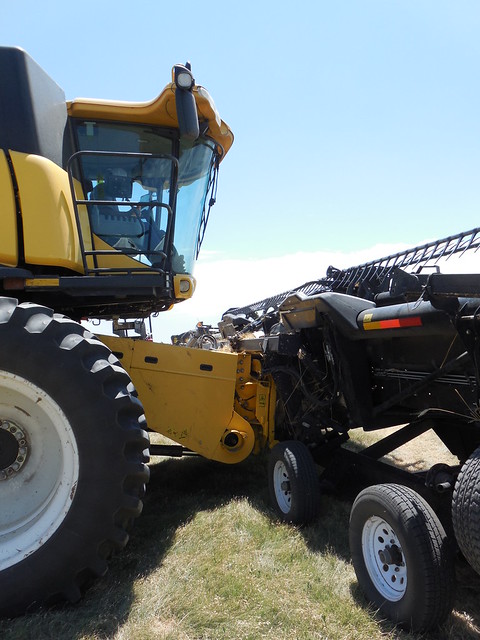 In one fluid motion Dad unloads the header in a matter of seconds. 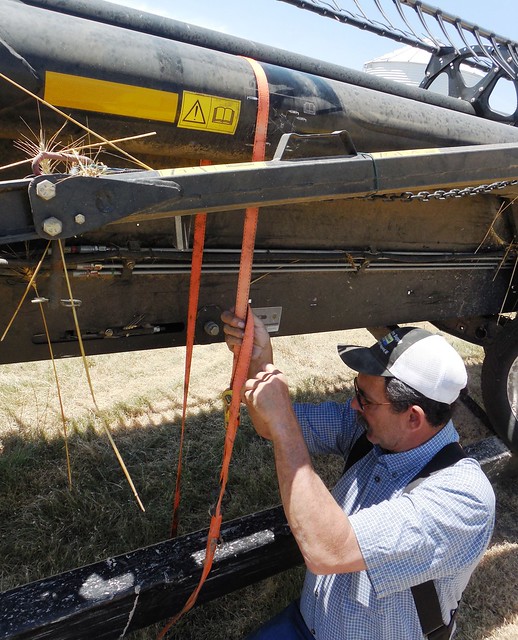 Tightening up the last strap on the header trailer. 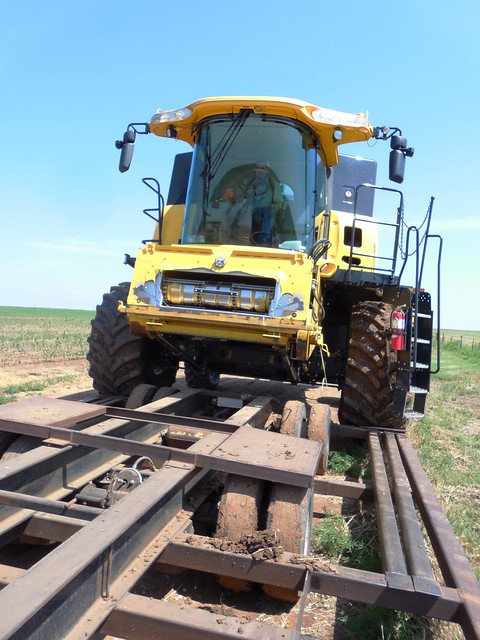 Lining up the CR with the trailer. We had quite the collection of mud from down south. 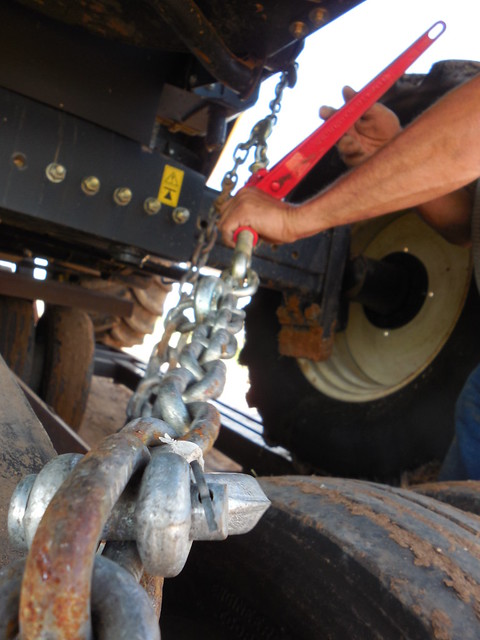 Chaining down the combine. 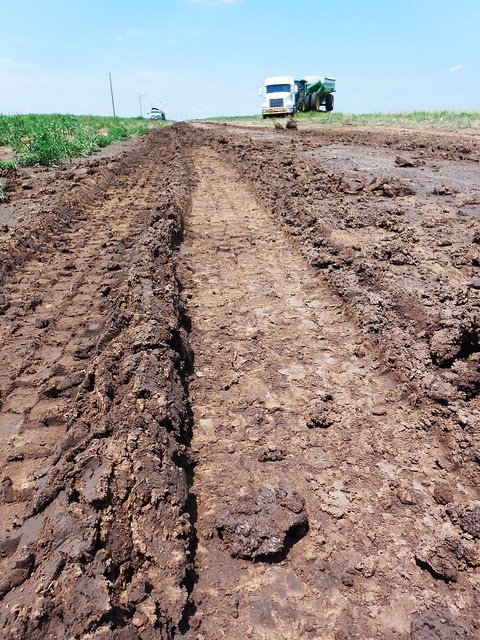 It rained the day before we made it back to Panhandle, Texas. It took some maneuvering to get everything moved around in the muddy fields. 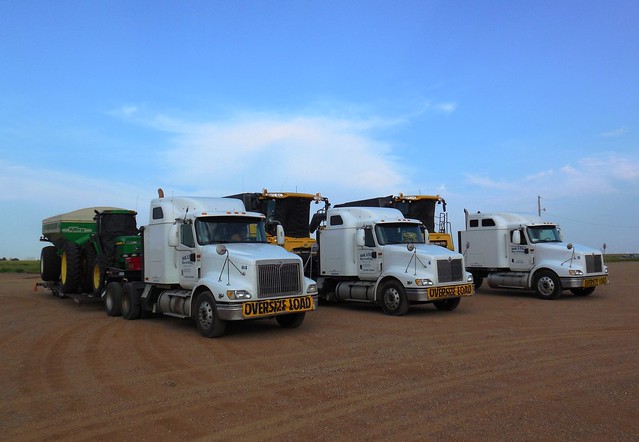 The oversized loads parked for the evening.

The convoy up with the sun and ready to cross the Nebraska border. 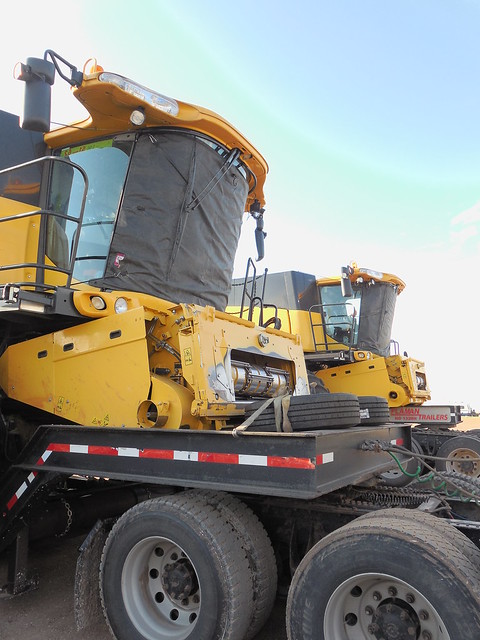 The twin beasts enjoying some sunshine. 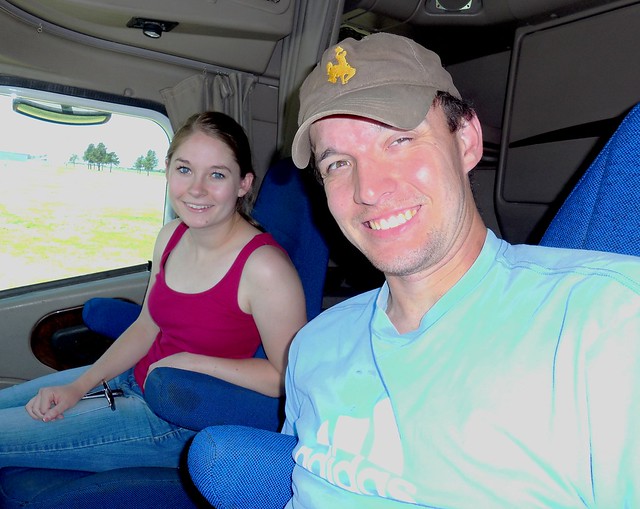 Dani and Brandon cheesin’ it up.

The convoy parked in Oakley, Kansas for a lunch break.

The morning we all split ways Brandon, Ashley and I all came out for breakfast wearing our matching 2014 All Aboard Wheat Harvest T-shirts…completely unplanned! Yep, we’re pretty adorable siblings. We’ll be sure to sport our new T-shirts the next time we’re together.