All Aboard Harvest | Home and Hindrances
9720
post-template-default,single,single-post,postid-9720,single-format-standard,qode-quick-links-1.0,ajax_fade,page_not_loaded,,qode-title-hidden,qode-theme-ver-11.2,qode-theme-bridge,wpb-js-composer js-comp-ver-5.4.7,vc_responsive

The Open Road/Grafton, ND—Being home feels weird. Not necessarily a bad weird, just weird. I think a big reason is that we were home before August had even began, which certainly goes against the norm. When I jumped in my little yellow Cobalt for the first time since May, I felt like I was driving a toy Hot Wheel around being that low to the ground.

I must say, though, that there is always that sense of being home that is comforting at the same time. You know everyone, everyone knows you. There is something to be said about that feeling of knowing that home is home and nothing can change that. However, getting into the city limits of Grafton has an interesting story attached to it. I am going to apologize right now for the length of post because that’s not normally like me but I truly feel the entirety of this tale needs to be told. Also, we weren’t the only harvest crew to deal with these conditions, which I just found out a day ago.

On the second leg of our travel day back to Grafton, North Dakota, Osowski Ag Service ran into what I will call a “wrinkle” in the system. While traveling through eastern central North Dakota, we came across some road construction. Not uncommon whatsoever and since there were no signs stating a width restriction, we continued on our route. Mom was leading, as usual, and announced that road construction was actually a bridge being worked on and that the road they built to get around it wasn’t a road at all, but a dirt trail—a dirt trail that was not well packed down at ALL and had cones as guard rails for a 10-foot drop on both sides.

Mom made comment on the radio that Dad was not going to enjoy going on this makeshift road and perhaps we should stop and maybe backtrack to a different road. These words came about a minute too late because as they were said, I watched with my hand covering my mouth as Dad drove onto the “road,” wobbling side to side and looking like an accident about to happen. When Dad was making the final incline out of the construction area, he came to a stop and his tires started spinning; STUCK.

I can’t lie to you and say I was completely cool and collected at this point; I panicked! We are in the middle of a construction zone with a hopper bottom and header trailer and a stuck combine trailer, holding up traffic. Then, to add to the fun, an engineer intern for the site walked over to us. He proceeded to ask us with his chest puffed out why we didn’t check the website before taking the route that we, coincidentally, travel every single year. He proceeds to take out a tape measure and discovers we are 14-feet wide, when the site has a 12-foot width restriction. My rebuttal to this particular statement was “Well, why weren’t there width restriction signs posted at any point previous to the point of no return when approaching this site?” All we knew was that we were approaching a construction site, we had no idea what was being worked on nor the conditions we would face until it was too late to turn back.

Dad then asked this intern “Well, what do we do? I’m stuck here.” The intern simply says we need to get it out and get it out NOW, and walked away. I don’t think I have ever thrown the ramps down off the combine so fast in all my life, and those things are not light. We ended up having to unload the combine in the middle of the construction site, drive it into the ditch right outside of the site and then drive the rest of our equipment out of the site and park it on the side of the road so we could load the combine back up again. Ever loaded a combine up alongside a busy highway? It’s not much fun, in case you had any reservations about that.

After an hour and a half of chaos and construction mayhem, we were finally back on the road to home. It was certainly a stressful afternoon for all involved! However, we made it home safe and sound and were greeted faithfully by Grandma Polly and Grandpa Hiladore! We made it home on July 31 and by Aug. 1, we were already back in the field. No rest for the wicked, isn’t that what they always say?

Quote of the Day—“Mercy sakes, looks like we got us a convoy!” 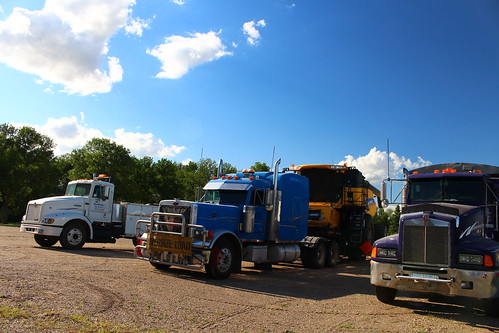 All parked and cozy back at the farm! Felt oh so good to be off the roads. 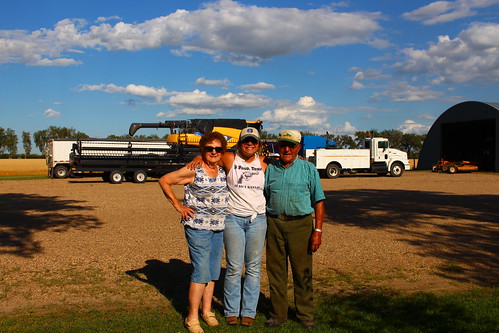 Always wonderful to be greeted by these two! Osowski grandparents, Polly and Hiladore. 🙂