All Aboard Harvest | The long road home
10095
post-template-default,single,single-post,postid-10095,single-format-standard,qode-quick-links-1.0,ajax_fade,page_not_loaded,,qode-title-hidden,qode-theme-ver-11.2,qode-theme-bridge,wpb-js-composer js-comp-ver-5.4.7,vc_responsive

Wheat harvest is nearly complete for High Plains Harvesting for the 2015 season. What a ride it has been! In some respects it is hard to believe it is almost over, but in others, it feels like we have been at it a very long time. In reality, as owners, the season never truly ends because we are often starting paper work and planning for the coming year before the current year’s crew even leaves for home.

Unneeded equipment (for the current jobs) is starting to trickle home. It will take several days of travel to get everything back. Once back at headquarters, the equipment will undergo any conversions necessary to prepare for fall harvest. We typically harvest corn, grain sorghum, and soybeans. Usually our fall season lasts into late November.

The majority of the crew still remains in North Dakota to finish up a couple of jobs there. They have been cutting wheat and also harvesting canola. Earlier in the job, the Durum had been running around 61 pound test weights and yielding around 55 bushels per acre. Things had been going very well until we experienced a major breakdown with one of the combines which involved removing the entire engine to get to one of the parts. The outcome of that situation is still in the works, and it is something we wish could have been avoided, but unfortunately, we aren’t immune from breakdowns. Also, a mud hole reared its ugly head yesterday, so we were given flashbacks of some of our Texas memories! 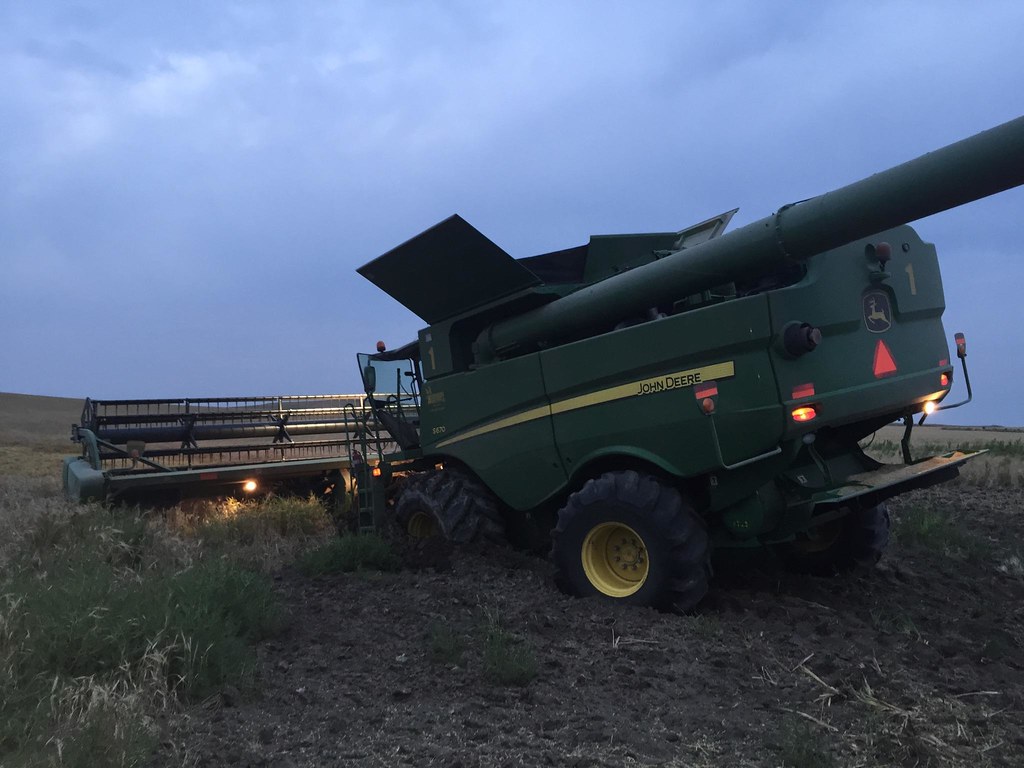 Sigh.  As you can tell the ground had been worked. There was no indication of mud. (Photo from Albert.) 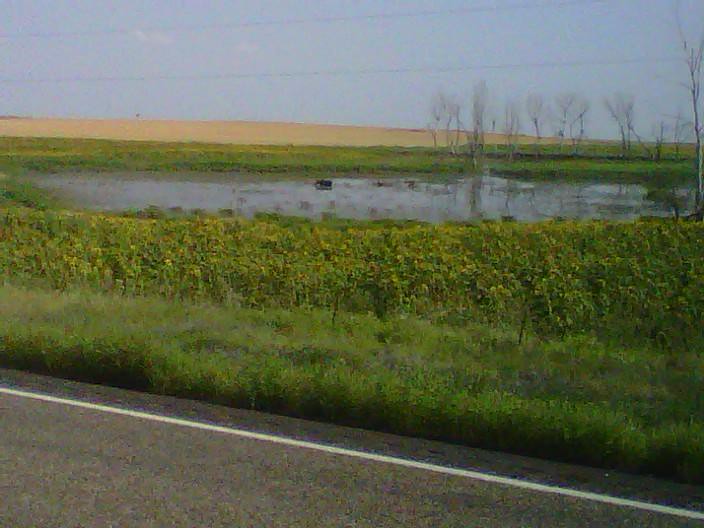 It’s hard to tell, but the brown object is a moose! Ryan sent this in from North Dakota.  Not an everyday sight for our crew! 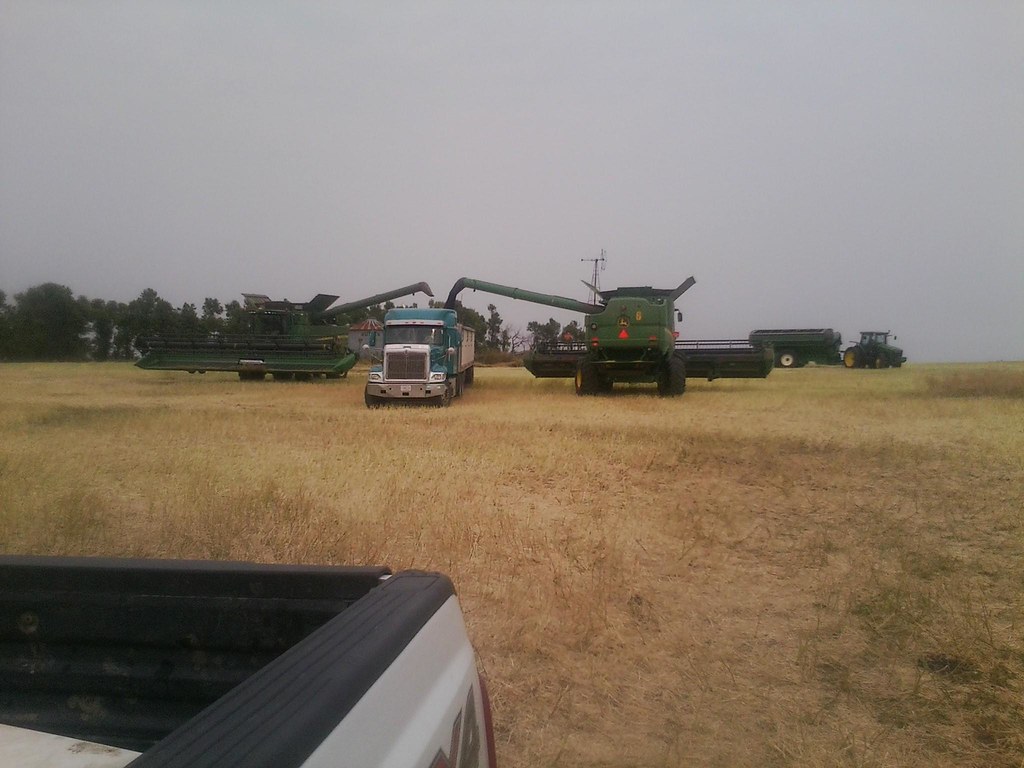 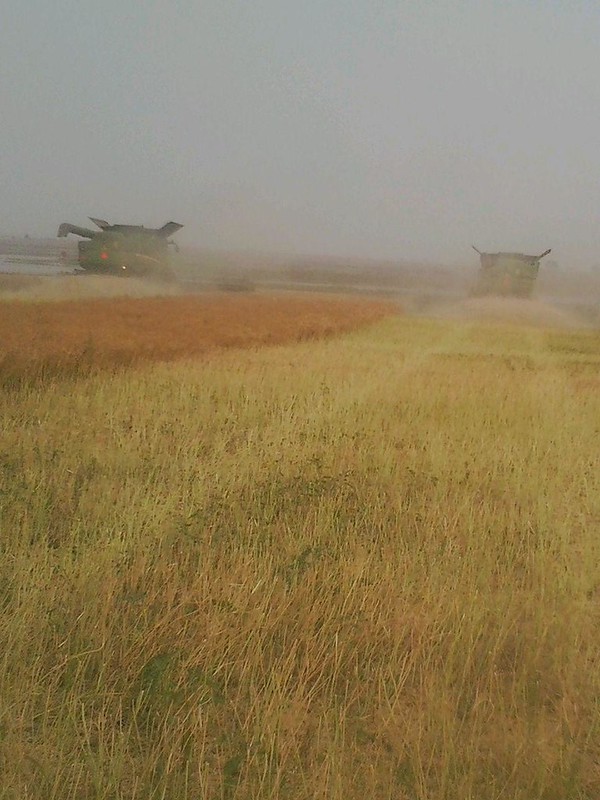 A few action shots from Mark. 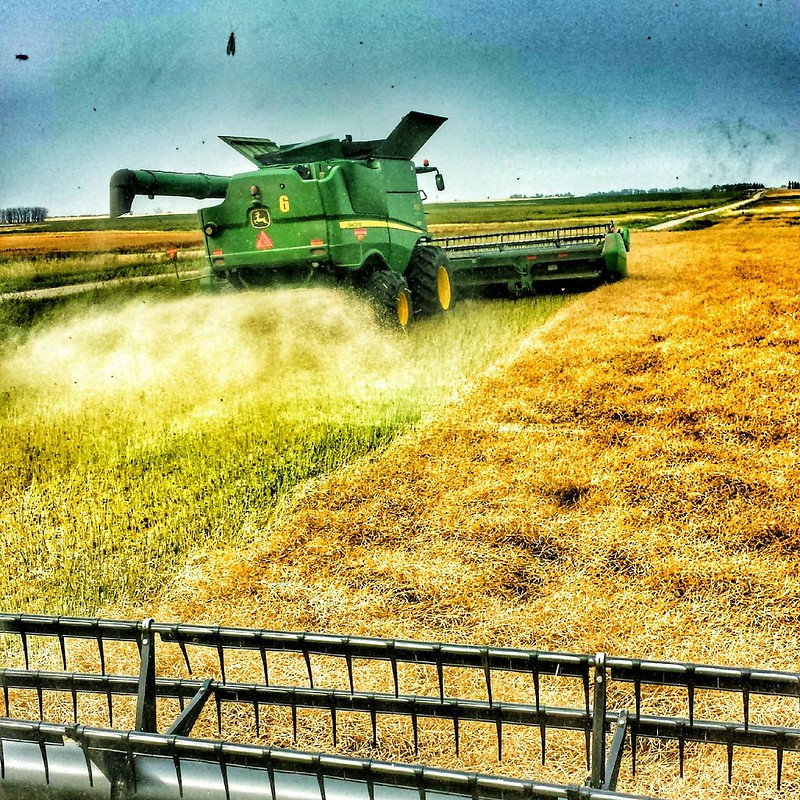 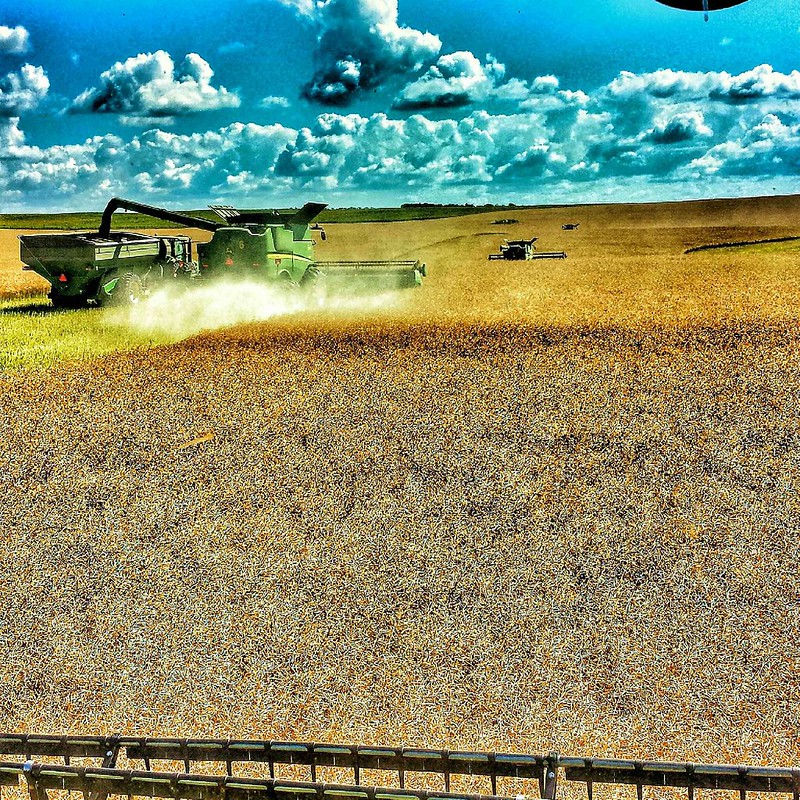 Michael submitted these photos. The filters he used added such a creative touch!

Our northern jobs are a little different than others because some farmers have large amounts of on-site storage. They have the ability to run dryers so we are able to harvest the crops at a slightly higher moisture than is often the case which helps with our efficiency. Even so, last week we ran into some green crops and had some precipitation. We hope to have the crew traveling home next week. Obviously, as you have learned, these plans are subject to change! 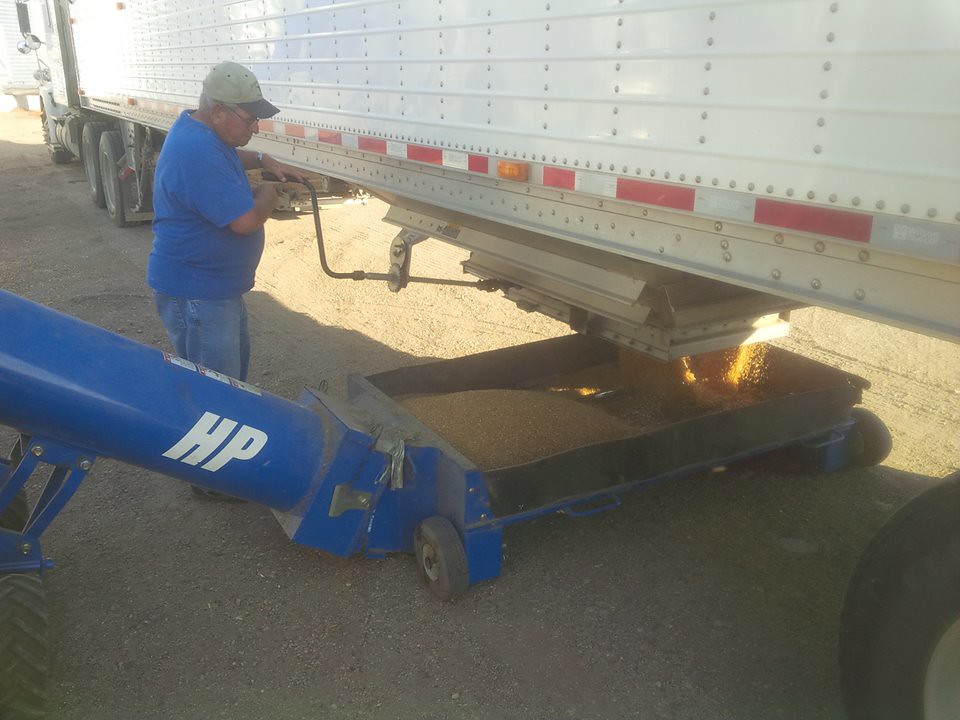 Harold unloading his trailer at an on-farm storage site in North Dakota. (Photo from Ryan.) 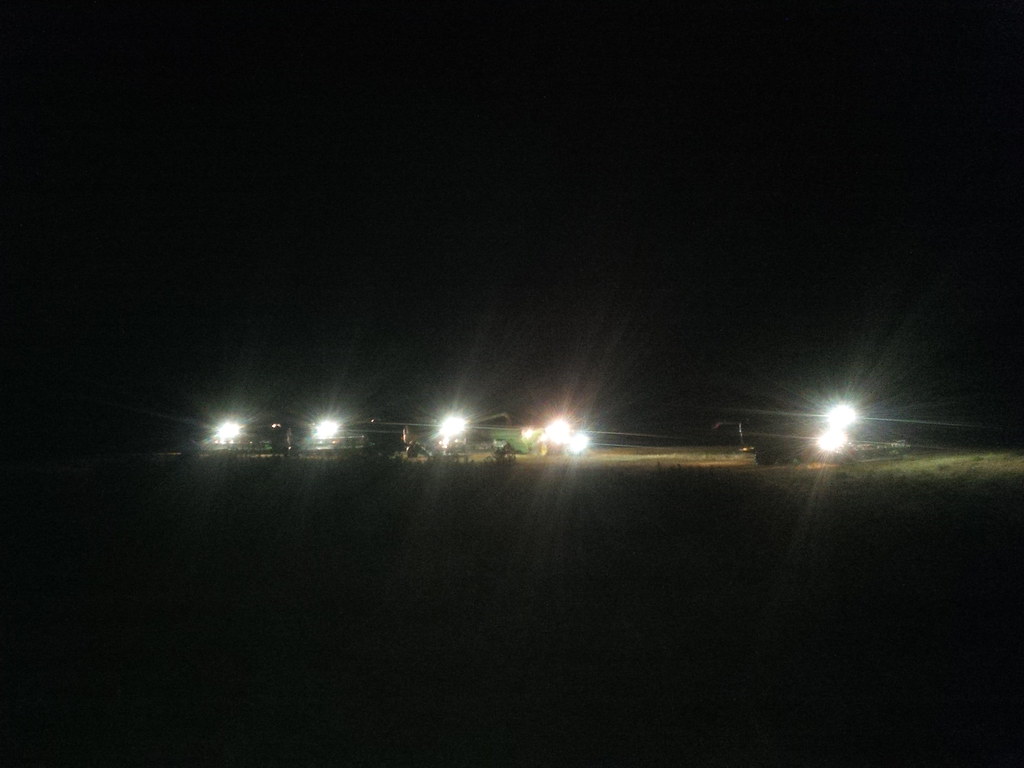 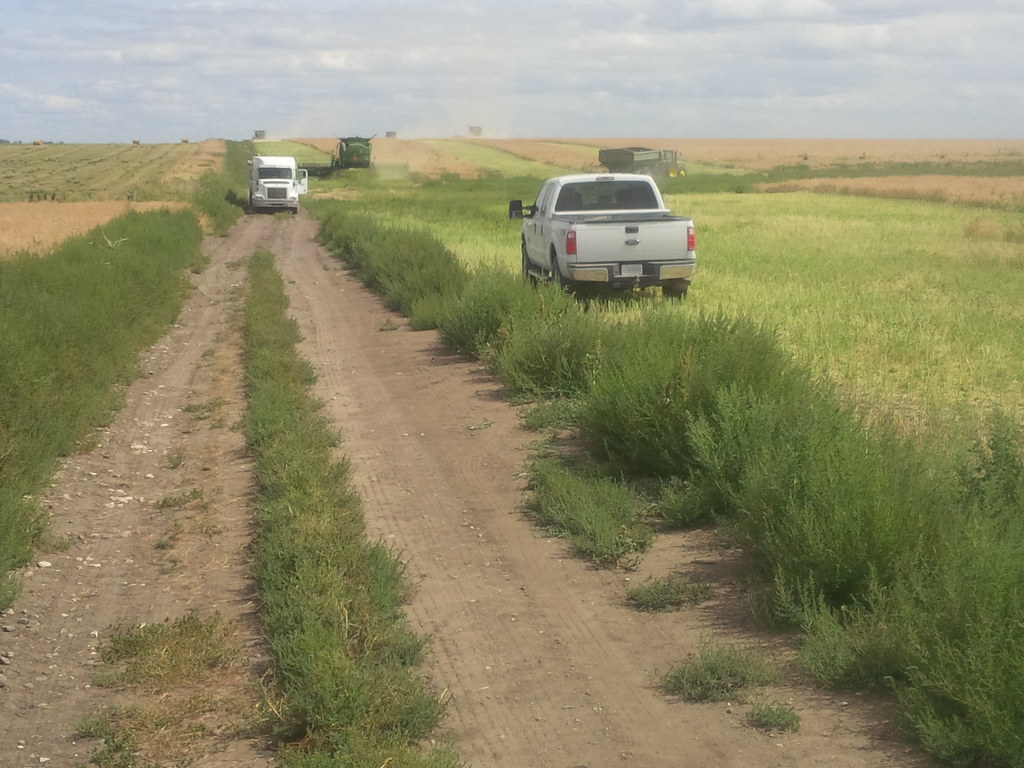 A few more shots from North Dakota that Ryan sent in.

Things are slowing down in regards to the changing news and updates. By the looks of things today, it would appear that wheat harvest will gradually dwindle to a halt so it seems the time is upon us to make my final All Aboard Wheat Harvest post of the season. I’d like to take a brief moment now to thank those who made this adventure possible.

Thank you to all our farmers who worked with us this season. It is for you that we are in this business. It was great being able to see familiar faces as well as meeting some new ones this season. We look forward to serving you again in the future.

We also thank our crew members who have continued to work so hard and maintained positive attitudes this season as well as those who stepped into help when the need arose. We recognize you are a crucial part of this operations and your efforts are appreciated.

Thank you to our family and friends for putting up with our crazy lifestyle! Everyone is very supportive and some have even stepped up to help with mail, yard work, etc., while we’re away and we thankful.

Writing has always been something I’ve enjoyed, even as a young child. I appreciate High Plains Journal for taking a chance on me and the High Plains Harvesting crew by allowing me to join their team as an All Aboard Wheat Harvest correspondent this year. Thank you to our primary sponsor, New Holland, and contributing sponsors, Great Plains, Kuhn Krause, Unverferth, and the U.S. Custom Harvesters Inc., for sponsoring the blog and giving us a platform in which we could share our harvesting journey. As agriculture continues to evolve, people become increasingly removed from the farm, and information instantly/easily spread (accurate or not), it will be even more important for those in agriculture to share their stories. It has been an honor to be able to represent the wheat harvesting sector of agriculture this season.

Finally, thank you to faithful readers and followers of the All Aboard Wheat Harvest blog. It has been a joy to interact with those of you who reached out to us. I have learned much from your stories and been encouraged by your words.

Thanks again to everyone who helped make this a memorable season! Please honk and wave if you see us completing harvest up north, traveling back home or out harvesting this fall! May God bless and keep you until we meet again!

The HPH crew sporting their All Aboard Wheat Harvest shirts for a team photo while in North Dakota.  From left to right: Ryan, Albert, Harold (aka. Opa – affectionately named by the guys), Jaap, Wian, Pieter G., Michael, Kirby, and Mark.  Not pictured, Pieter T.  and David (taking the picture).  Two combines were also on a work-cation to Canada!