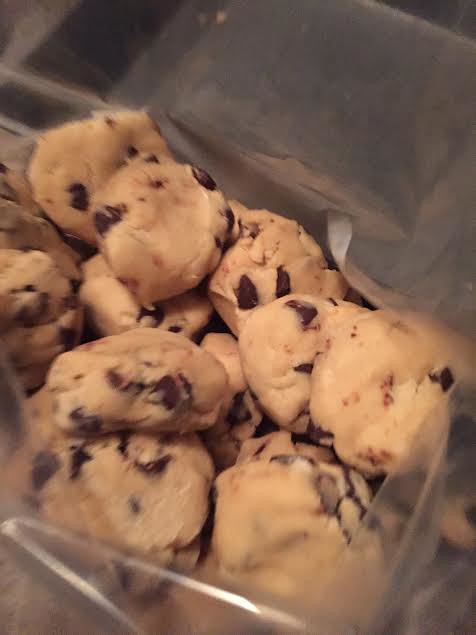 Claude, TX –
Remember my issue with not enough ingredients for the chocolate chip cookies? The recipe was one that I used from the HarvestHER Facebook Recipe Album (Randi Beckley of Beckley Harvesting). They turned out perfect! I baked a small batch to make sure all was good (mostly just to satisfy that chocolate craving I was having) and then I froze the rest. I made them into little “pucks” and froze them individually on a cookie sheet. After they were frozen, I put them in a large baggie for ease of using at a later date. I’m learning a little at a time what to do since we don’t have any cooks with us this year.

1. Mix the butter and sugars together until light and fluffy.
2. Add eggs and vanilla.
3. In separate bowl, combine dry ingredients and slowly add them into dough.
4. Once dough is fully formed, mix in bag of chocolate chips. No, really, the whole bag.
5. Refrigerate for 24 hours. This step is crucial.
6. The next day, roll the dough into 1/4 cup balls. It will make your hands hurt because the dough is tough, but the cookies are worth the pain. Push through the pain, and picture those glorious, warm, gooey cookies awaiting you on the kitchen table.
7. Bake at 350 degrees for 10 minutes, or until edges just begin to turn brown.

Jim and the farmer thought there was a field that looked like it could “go” yesterday afternoon. We did what we needed to do (went to town for a quick bite to eat, bought ice, filled our water jugs, set the air conditioner at a higher number, turned off the water supply to the Cottage) and headed to where the Yellow Beast has been calling home since we got here.

We were so excited to think that we’d also be cutting wheat like so many of the other harvesters were. It seems like we’re always the last to get rolling. But…that’s no different than anything we do. The girls and I joke about how we’re always the last ones out of a gathering or in line or part of a tour, etc. Maybe it has something to do with our last name?? 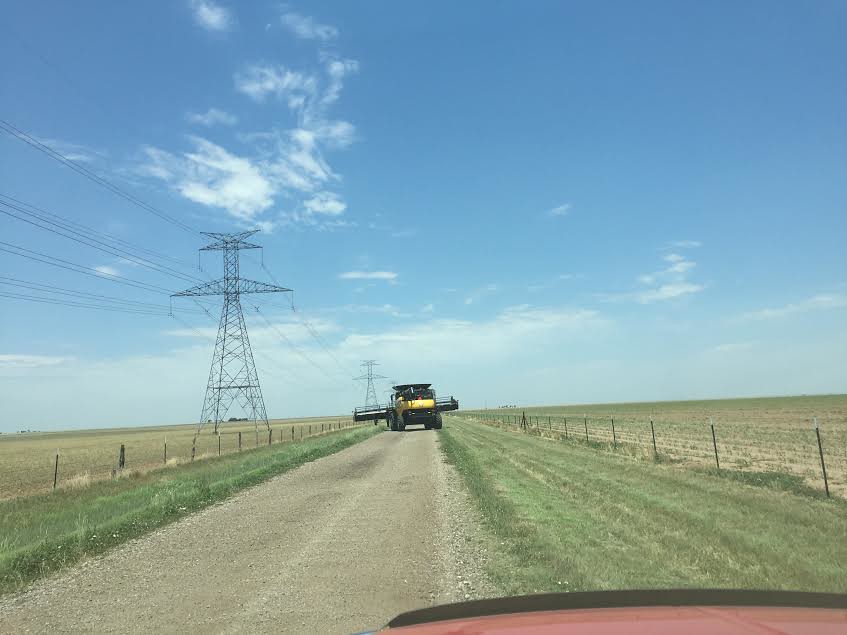 This is so exciting! The first cut of a brand new season is the best! The smell of wheat chaff and straw is like some sort of fix for the harvesting addiction! Once the wheels are rolling and the header is making its way through that golden field of grain, you know harvest has begun…most of the time! The common saying with harvesters is “hurry up and wait.” This is what happened to us yesterday. We got all dressed up for the party only to realize we arrived on the wrong day! 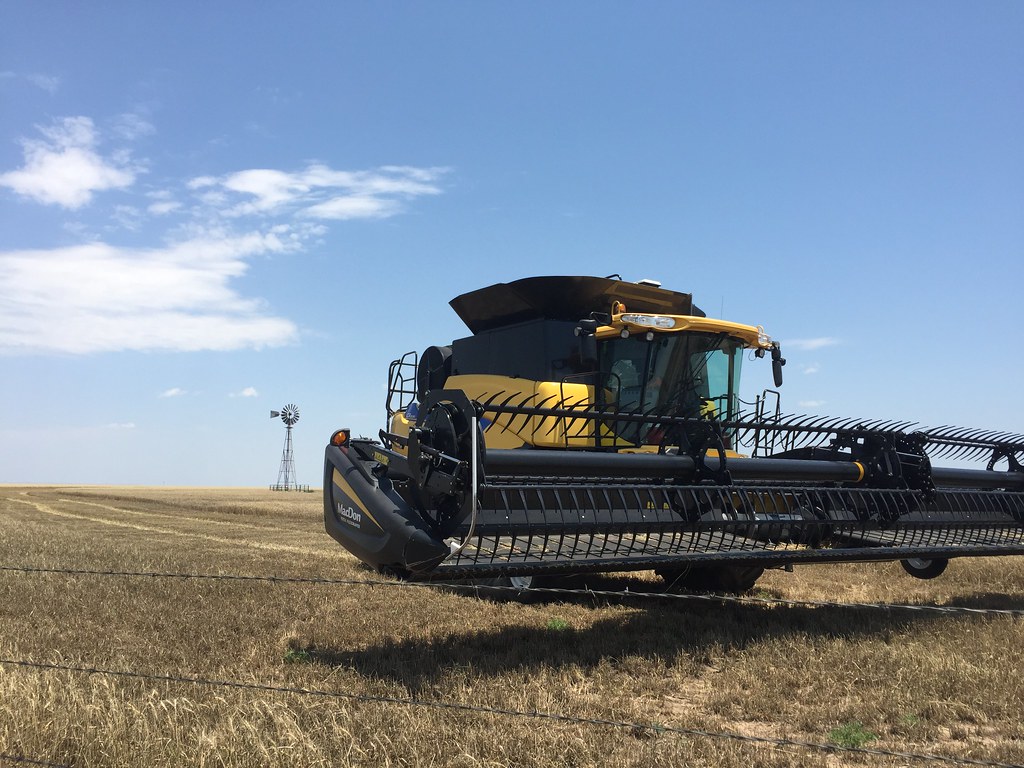 The first pass in the field resulted in the realization that it would probably also be our last for the day. The moisture showed 20% in the combine but just to see where we were in comparison to the elevator’s tester, we’d take a sample to town. The elevator’s test showed 18% – a two point difference. So, Jim’s thought was that we’d take the time to go look at a different field and then come back to the Beast and fix a section that had broken. We could tell something wasn’t quite right because the header was leaving a skip of wheat. 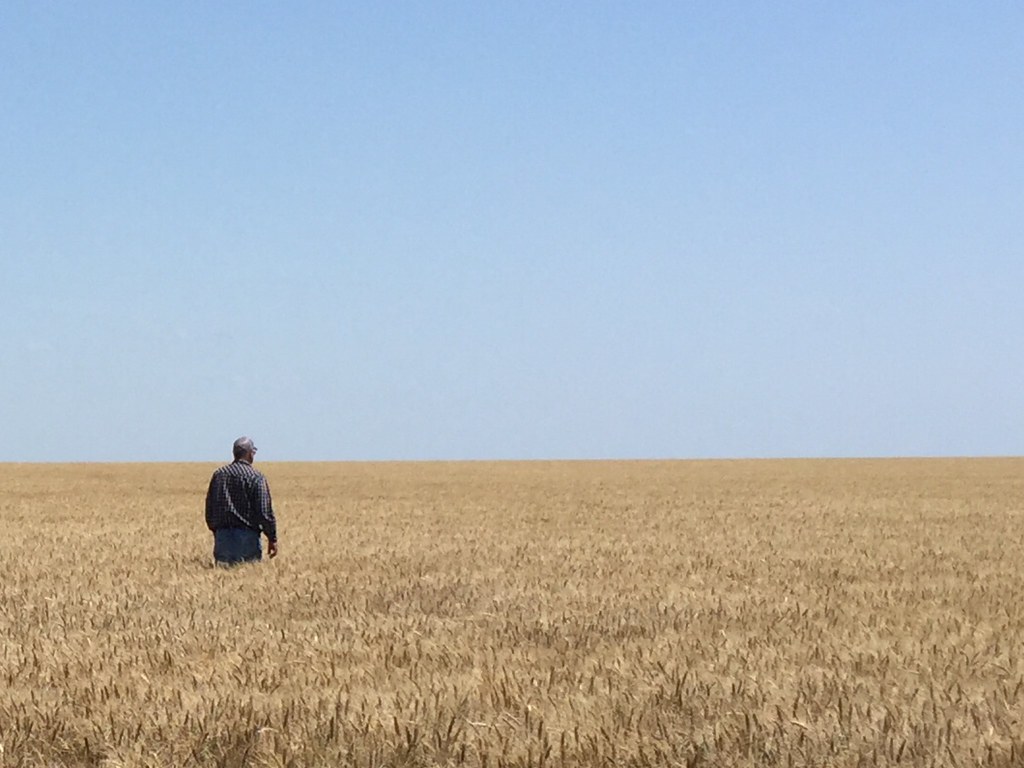 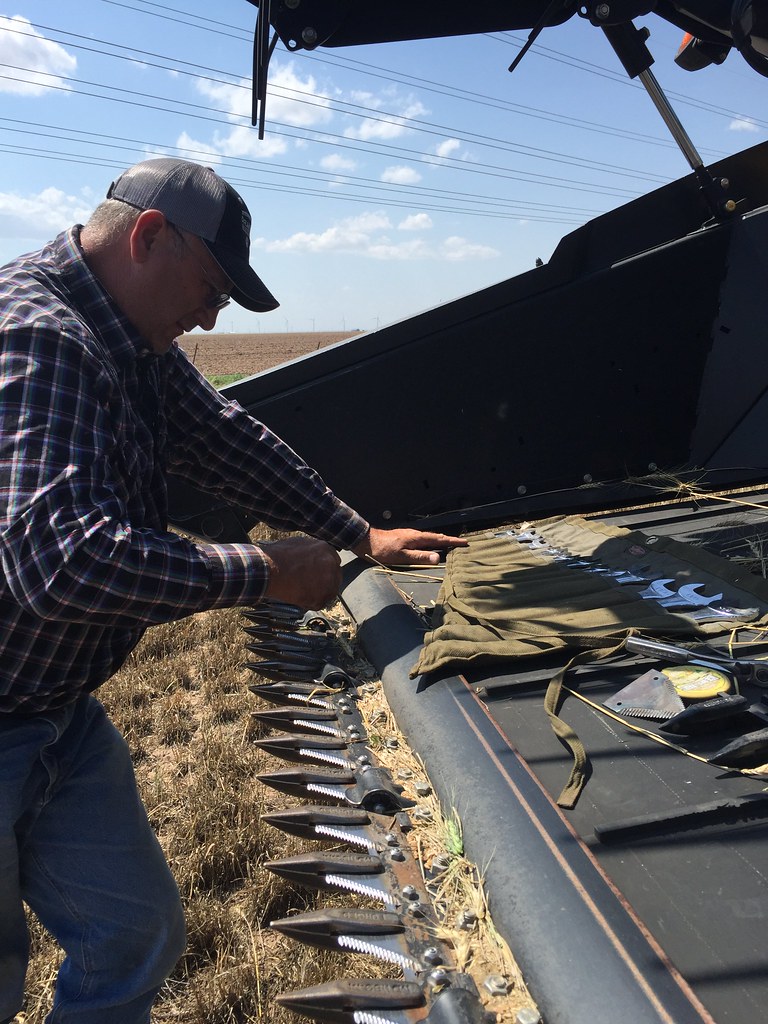 We realized that not only did we have a broken bolt on one of the sickles (causing it not to cut as it should) there was also a broken guard. We may as well fix both issues at the same time. 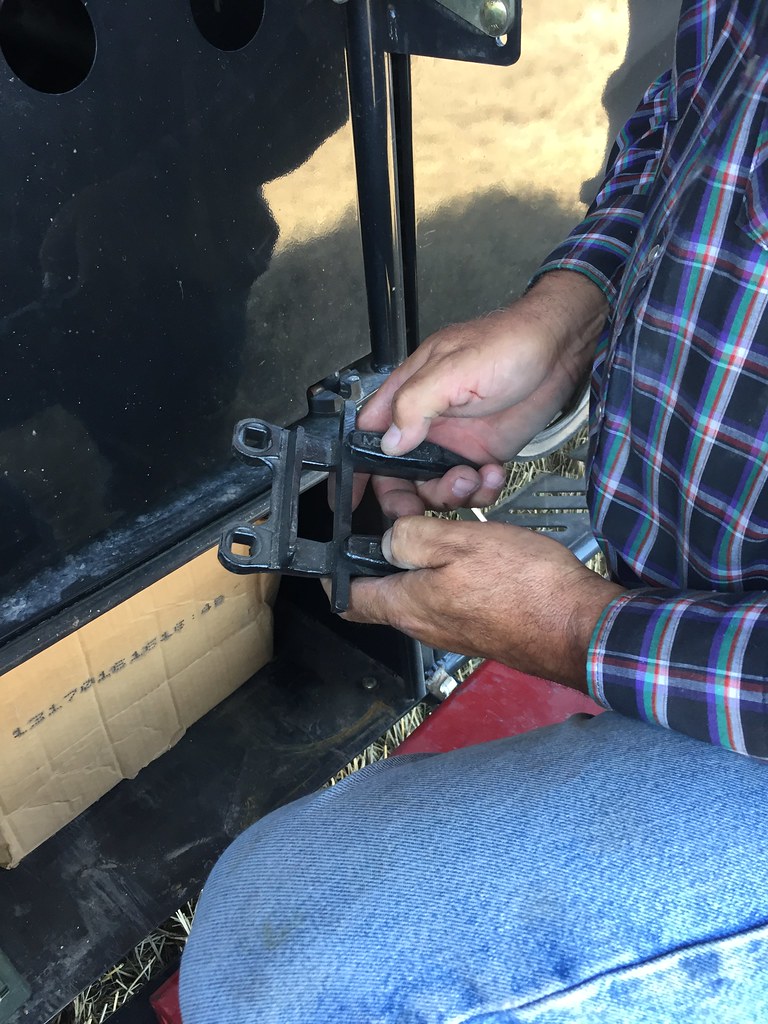 Jim took this time to give me a refresher course on where everything was in case I needed to change a section or guard on my own. 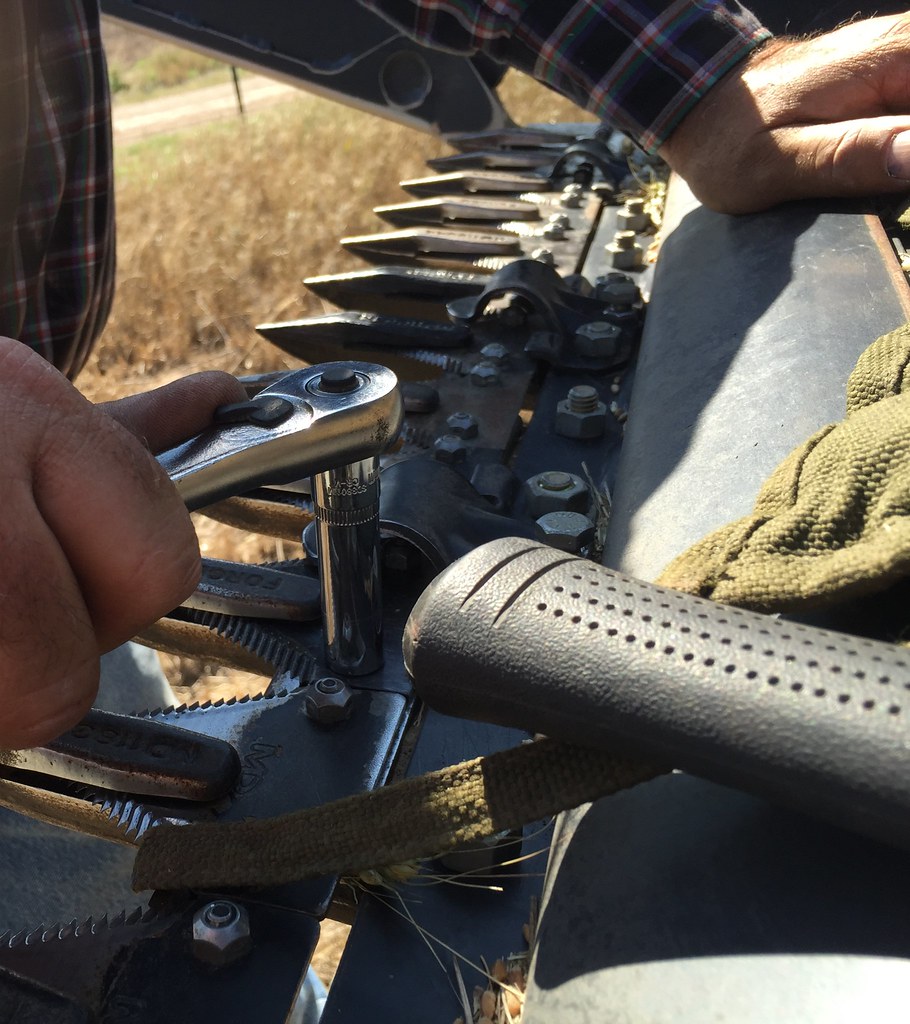 By the time we took our field tour, fixed what needed to be fixed and visited with a neighbor who had stopped by, a couple of hours (at least) had passed and we decided to try it again. We made another pass right next to the first one. By the time we got back to the beginning point, Jim stated, “We’ve cut 4 acres.” Good start, I reckon! 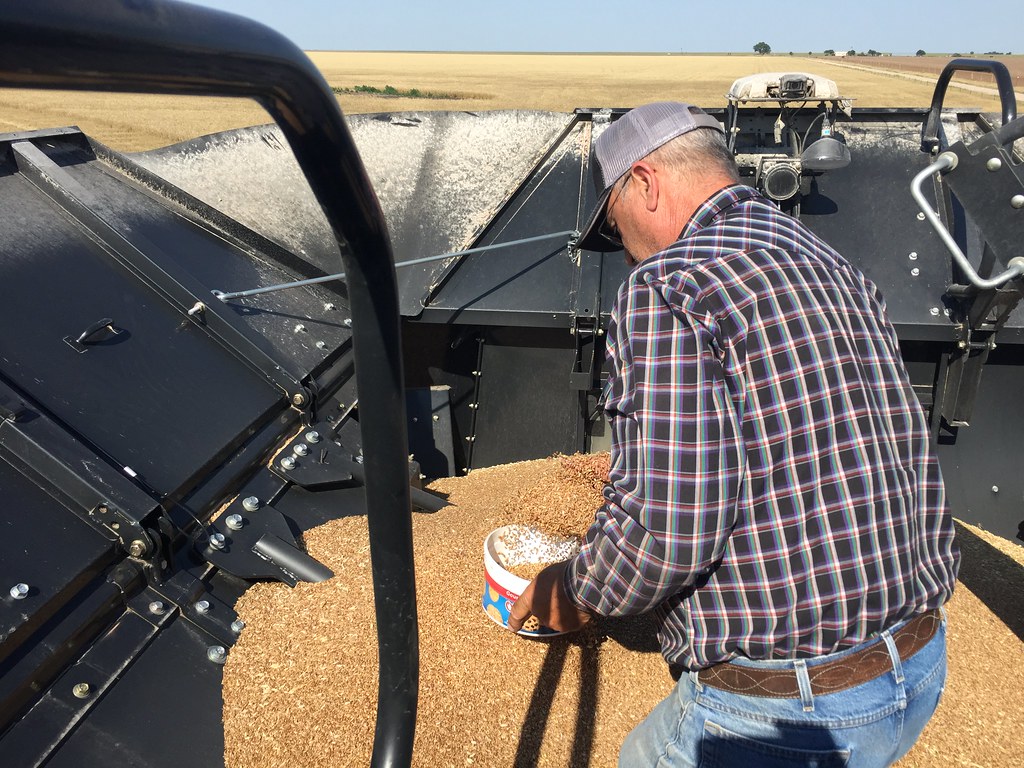 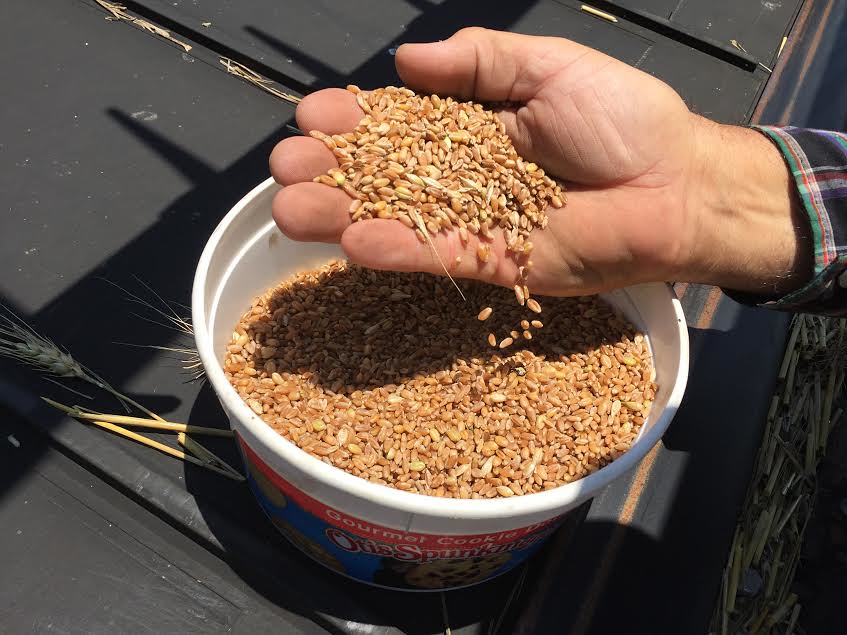 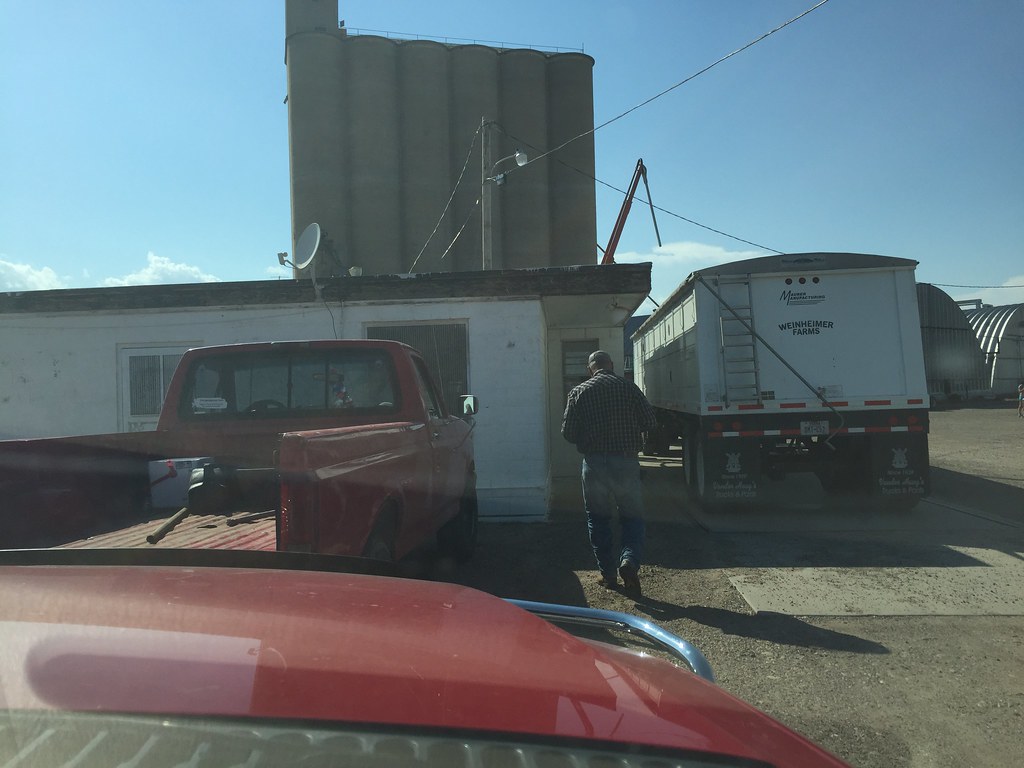 We made our way back to town to see what the elevator would show for moisture this go-round. We were hopeful we might be given the thumbs up to keep rolling.

Unfortunately, it was still 14.2%. Both Jim and the elevator manager decided that a truckload would bring the moisture level up a point putting it well over 15%. So, there would be no more than four acres cut yesterday. 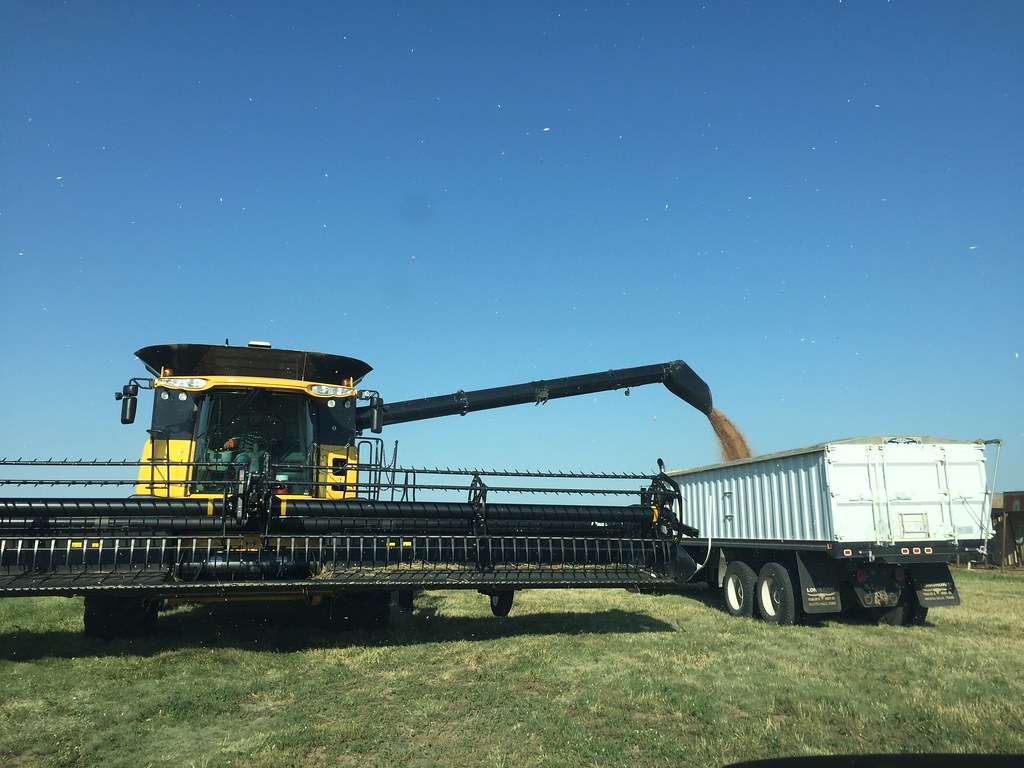 We dumped what little wheat was in the combine into Frank hoping the air would dry it down before more was added to the top. Jim was pretty sure that we’d be able to get started shortly after noon today…until this forecast rolled in. We’re hoping the majority of the heavy rain will miss us – and so far, so good. Let’s hope the sun comes out in the morning, the wheat dries to that magic number so we can, once again, get the Beast in the field and let it do what it’s meant to do! 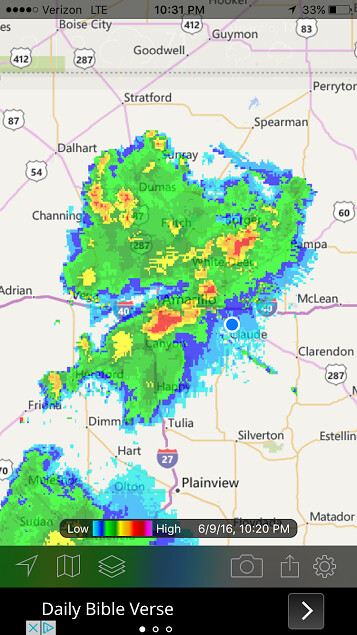