All Aboard Harvest | A Taste of Harvest
12736
post-template-default,single,single-post,postid-12736,single-format-standard,qode-quick-links-1.0,ajax_fade,page_not_loaded,,qode-title-hidden,qode-theme-ver-11.2,qode-theme-bridge,wpb-js-composer js-comp-ver-5.4.7,vc_responsive

15 Jun A Taste of Harvest 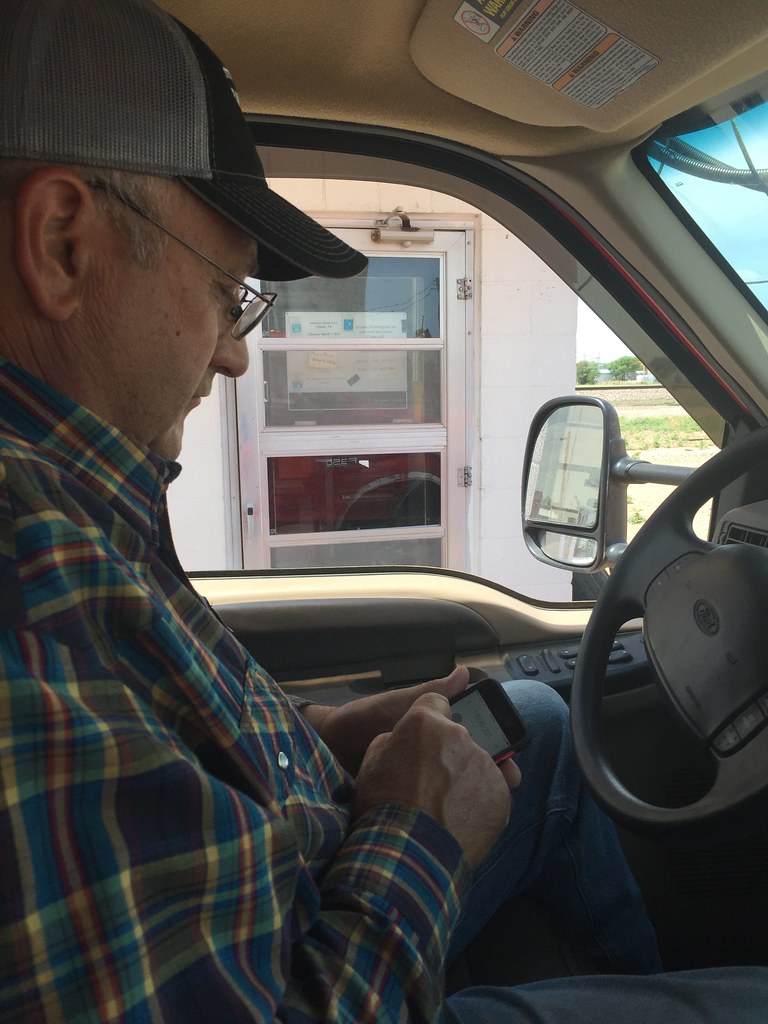 Jim making his call to the elevator manager.

Claude, TX – Sometimes with this thing called harvest…you just have to wonder if you’ve just drawn the unlucky card or if things are happening for a reason. I know other harvester friends have had their fair share of rain to deal with so I shouldn’t be feeling like we’re the only ones. However, when you are on social media and all you see are combines going round and round (or in our case, back and forth), you start to wonder what you might have done wrong. Was it the wrong location? Is it just the summer? What can/could we do differently? Just questions. Sort of like with life, I guess. You have to learn to deal with the cards that have been handed to you and make the best of it. And, if there’s something you CAN change, change it. Changing the weather just ain’t gonna happen!

We started cutting on Sunday afternoon. We took a test drive through the field again and took our sample to the elevator. Because it was Sunday and harvest really hasn’t gotten started much around here yet, the elevator was closed. A quick call to the manager told us that he was only five minutes away. So, needless to say, we waited for him. The sample was 13.5%. Good enough to cut another truckload and see where we’re at. 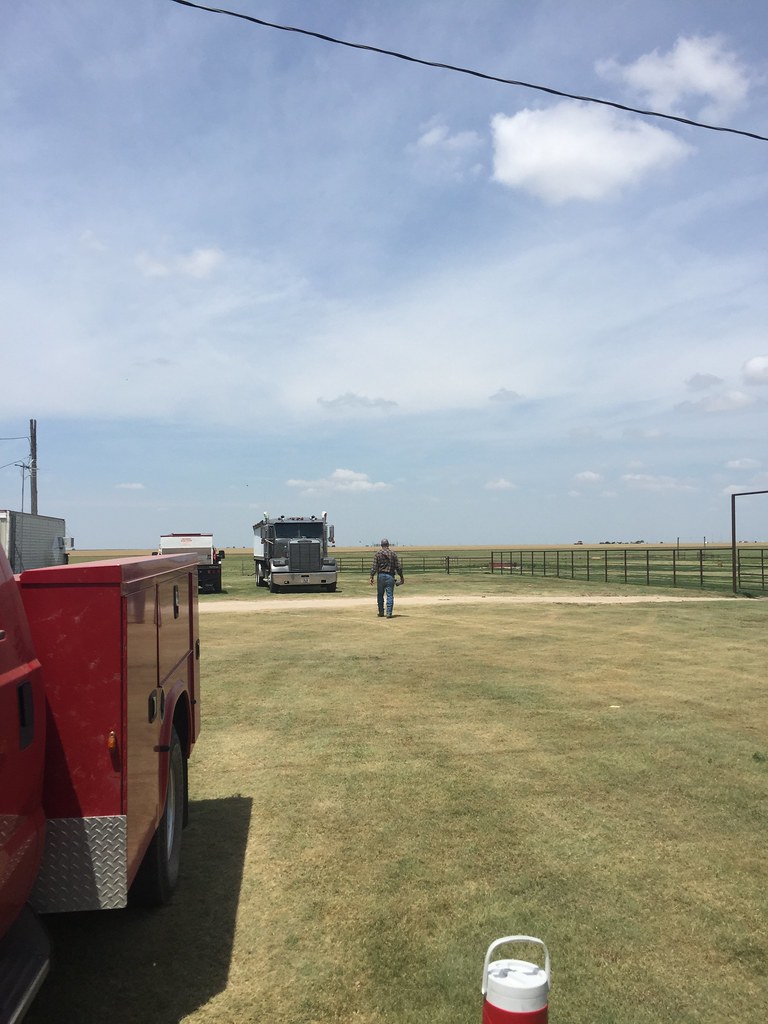 Getting Frank fired up for at least a load (or more, we hope). 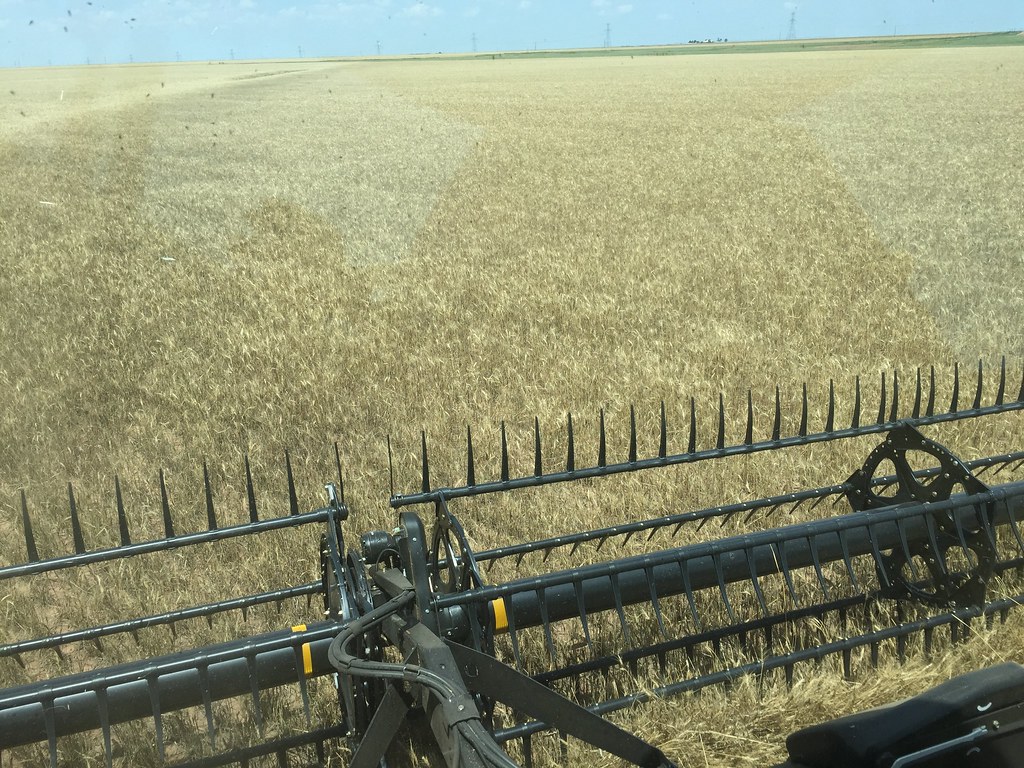 From the moisture monitor’s point of view – it was a go! Our farmer dropped by the field to see how it looked and to let Jim know he was going to let us use his tractor and grain cart so we can keep that Beast moving. A tractor/grain cart combo is a rarity in the fields we cut just simply because we can’t justify the additional expense. So we still do it the “old fashioned” way – cut til the grain bin in the combine is half full and turn right around and head back to the truck. Most times, your bin is ready to dump by the time you get there. 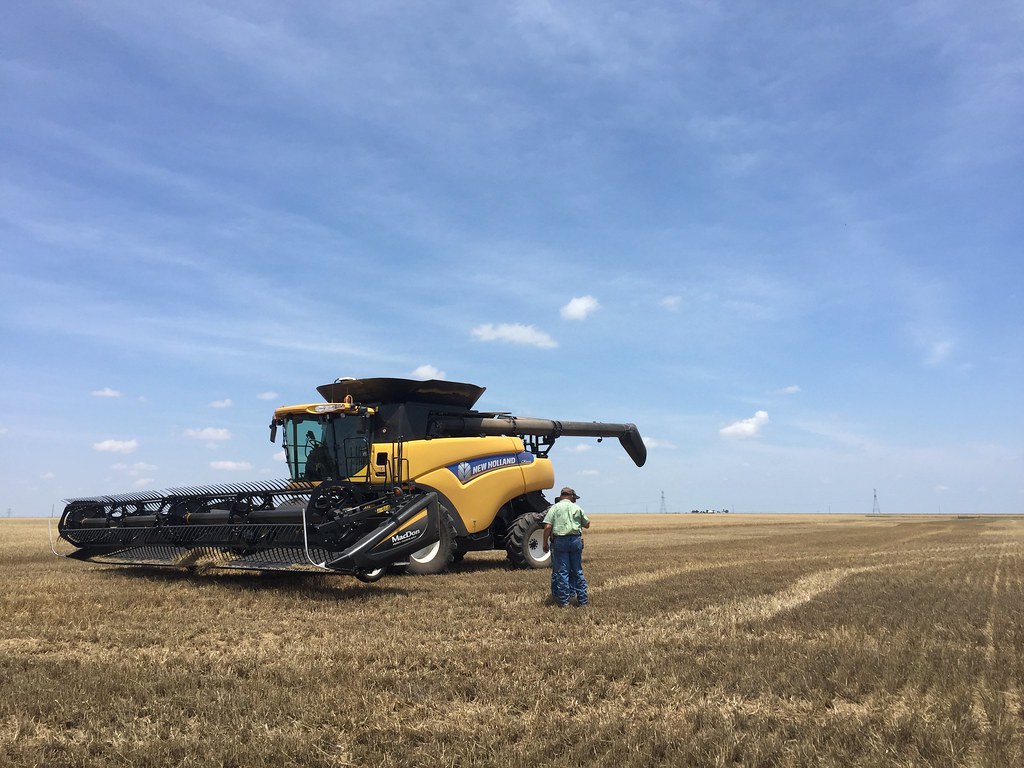 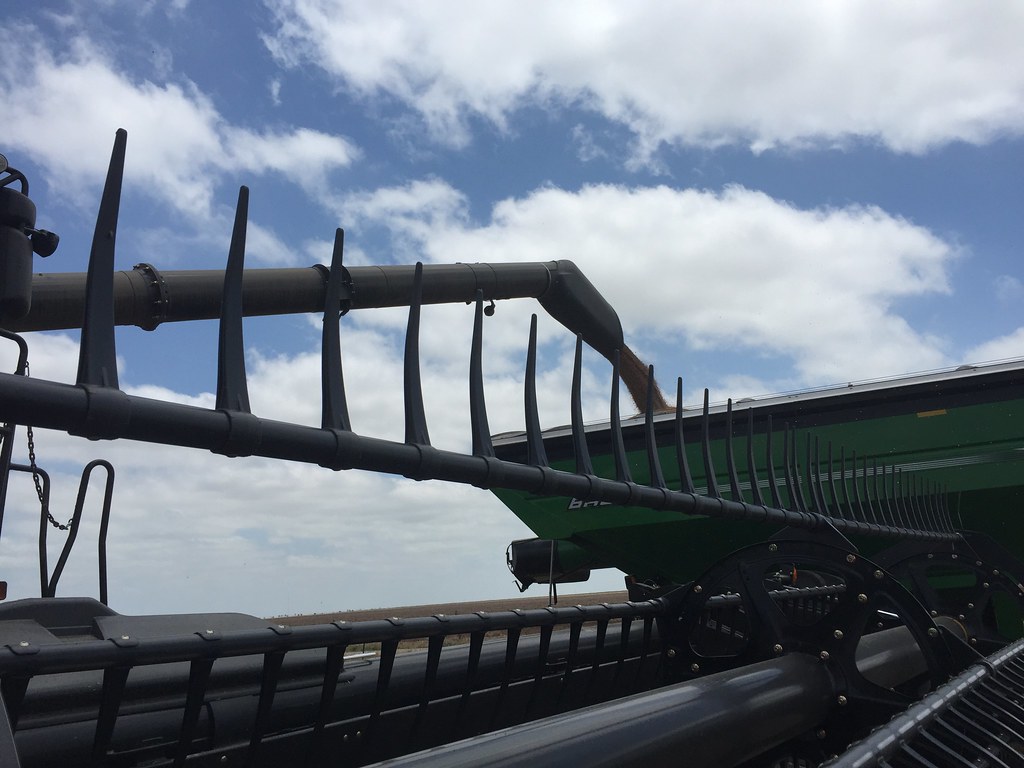 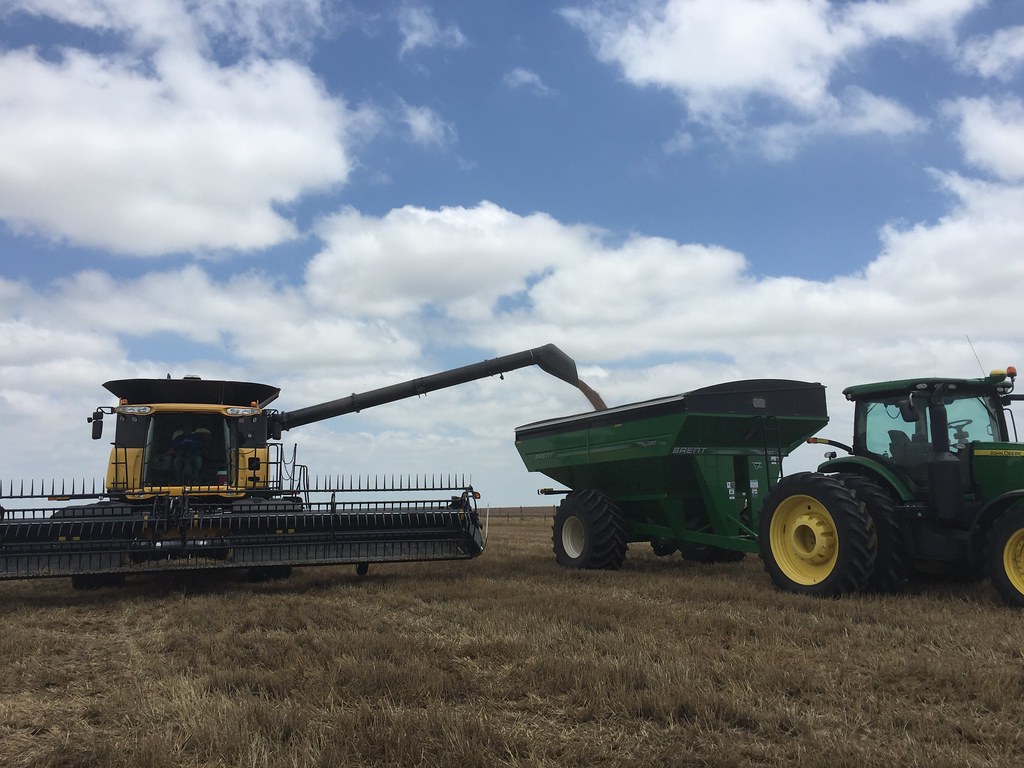 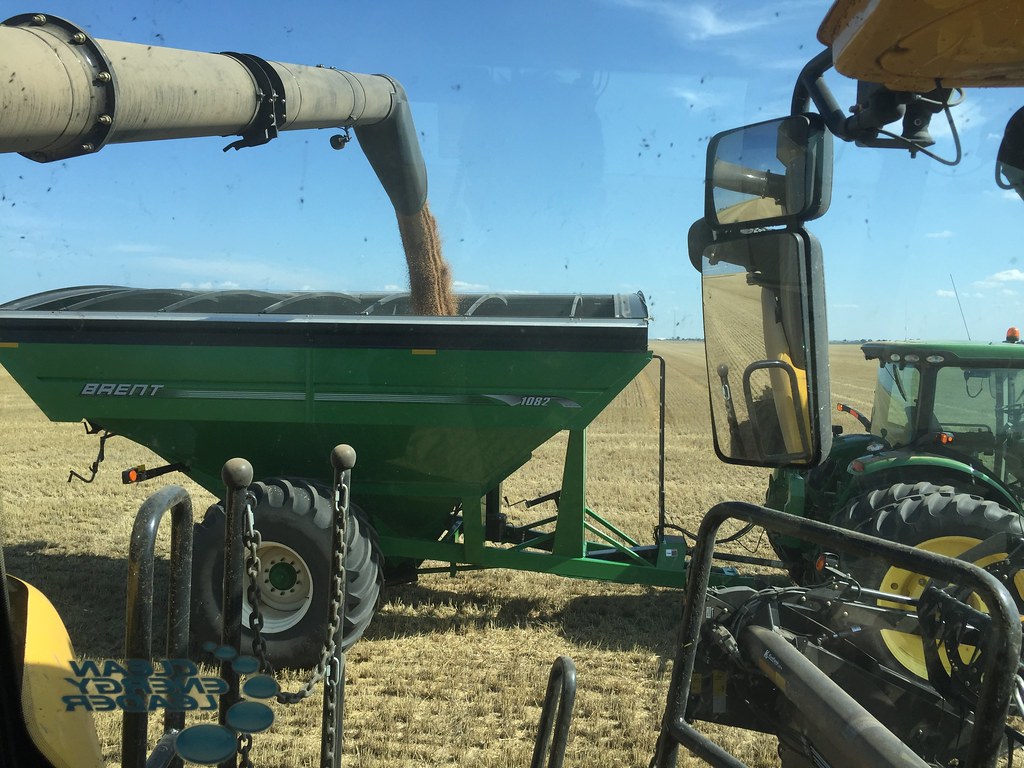 We were able to continue working all afternoon and into the night. We worked late (for us). It was after 11:00 when the Beast was shut down for the night and Frank headed back to the yard. Tomorrow will be a good day! One that both of us will look forward to – FINALLY doing what we came to do! 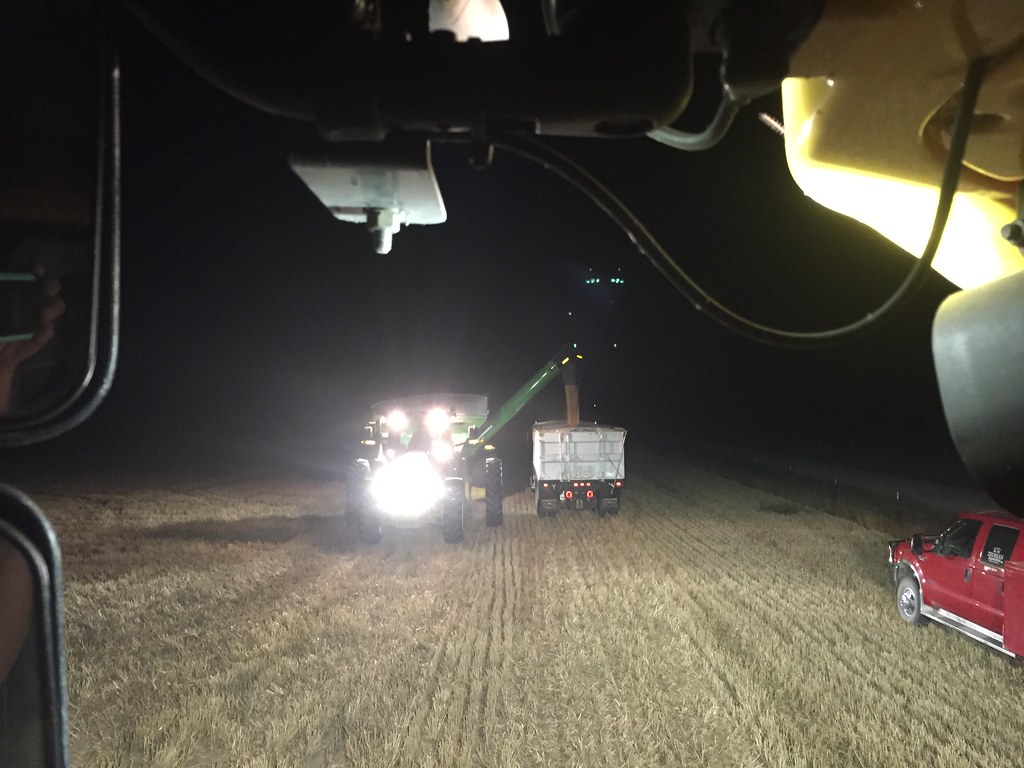 Well, it almost worked that way. It was very foggy when we woke up the next morning (Monday) and the clouds were quite thick. It was early afternoon before we were able to get things fired up again. The wheat appears to be doing a consistent 32 bushels per acre and test wheat is around 62 pounds. Protein is at 11-12%. Good quality! The field I cut back and forth on all day is a mile long and has had some hail. So, the quantity isn’t as much as it could have been had it not been hailed on.

I knew there was a chance for rain but the weatherman thought it would be for the northern parts of the panhandle. Well, the clouds rolled in late afternoon and got darker and darker and tornado watch after tornado watch was issued. It was mostly for the counties north of us. I watched that cloud build and build until the watches turned to warnings. It still remained north of us.

On the final round – headed north – the clouds were right on top of me (and it was dark – about 10:00 pm). I got on the two-way and called Jim to see if he thought I would make it up and back before it hit. His reply, “NO! Get out of the wheat RIGHT NOW and head back to the corner where Frank is. Do it as fast as you can without tearing anything up!” So, I shut ‘er down, put ‘er in road gear and headed for the corner. 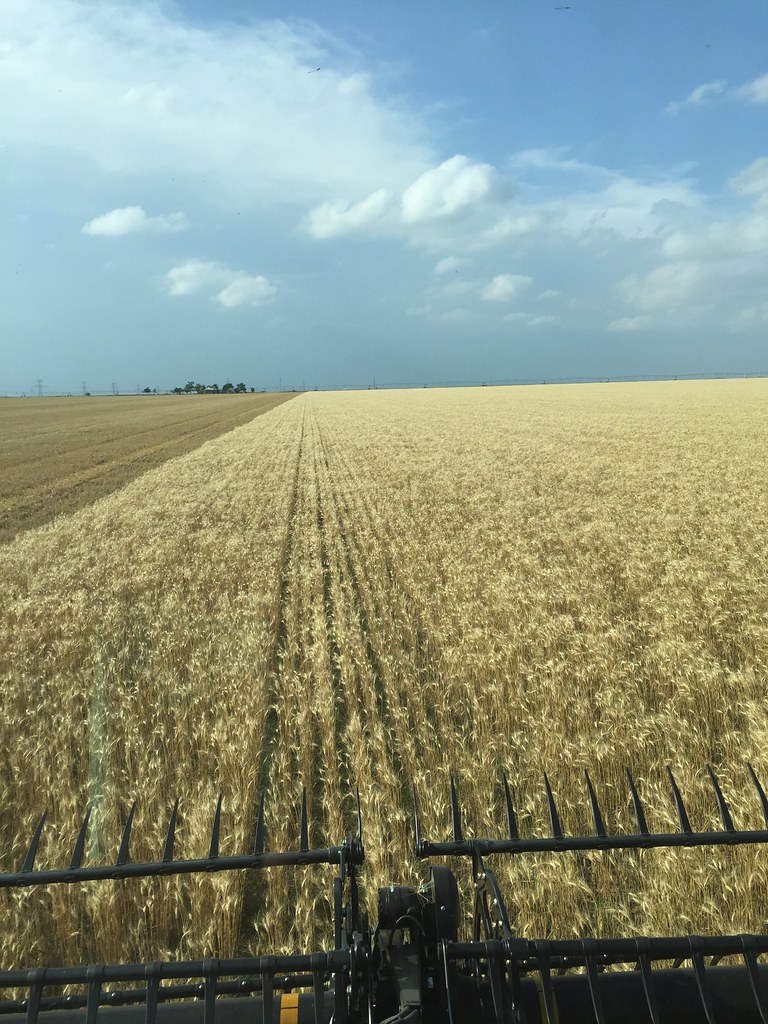 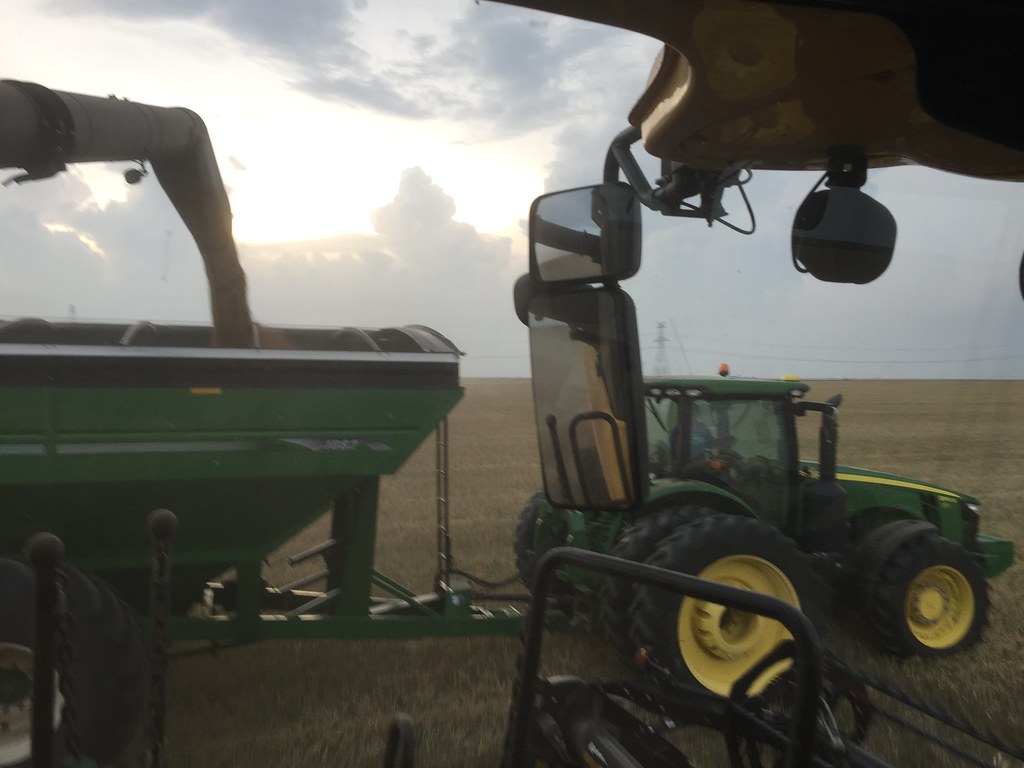 I unloaded the combine, shut everything off, jumped in the service truck and headed for the yard. Jim had told me if I could get there before the rain, put the Dodge in the shed, as well. I don’t run very often – like never. But this storm was a bit scary and I RAN to the trailer house to get the keys for the Dodge, jumped in and got both pickups in the shed while he was getting the Pete settled for the night. Just as I left the shed, it began to pour. All I could think about was just how perfectly timed that all occurred. The lightning was amazing and the rain hit the roof of the trailer house pretty hard but there was no hail. Thank goodness!

This morning, we woke up to very heavy fog, once again and the knowing that we probably had the day off, again. We went to town for lunch and learned that we had about an inch of rain. However, just north of us, around the town of Panhandle, they had 6″ of rain and a tornado on the ground. We were lucky to be just a bit south of the worst!

Now what? We get back into that mode of playing the waiting game.