All Aboard Harvest | Going Above and Beyond
12831
post-template-default,single,single-post,postid-12831,single-format-standard,qode-quick-links-1.0,ajax_fade,page_not_loaded,,qode-title-hidden,qode-theme-ver-11.2,qode-theme-bridge,wpb-js-composer js-comp-ver-5.4.7,vc_responsive

20 Jun Going Above and Beyond

Claude, TX –
Going above and beyond what is expected of you is a character trait that seems to be lost these days.  This doesn’t include everyone, though.

Today, our day in the field began at 7…7 p.m., that is.  It was also Father’s Day. We knew on Saturday night what our next day was going to entail. It would be making a trip somewhere to pick up a part that was needed to get the Beast back in action.

Just as the heat of the day on Saturday was beginning to make way for the evening cooldown, the Beast decided it was time to take a breather. I heard the faint noise ever so briefly. It sounded like metal scraping metal. I pretended like I didn’t hear it and kept cutting. Then, I heard it again. This time, it lasted a little longer and sounded much louder. So, I shut everything down and headed to the trucks. Right away, Jim wanted to know what the problem was. “Well, I’m not sure. It sounded like metal scraping metal right down here.” (I was pointing to the area just behind the header and close to the feeder house.) Jim turned on the machine and listened. He knew it was something either involving the shaft which carries the crop through the feeder house or something inside of the feeder house. He removed just enough pieces to determine the noise was coming from the shaft and was probably a bearing going bad. 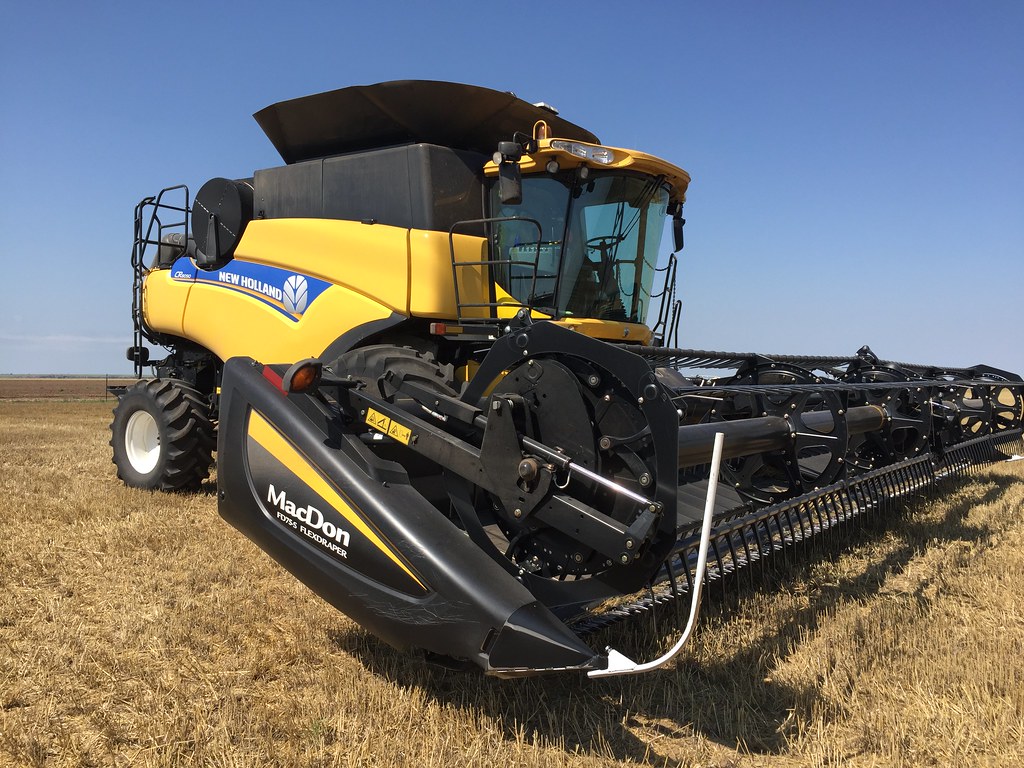 Beginning our day on Saturday. 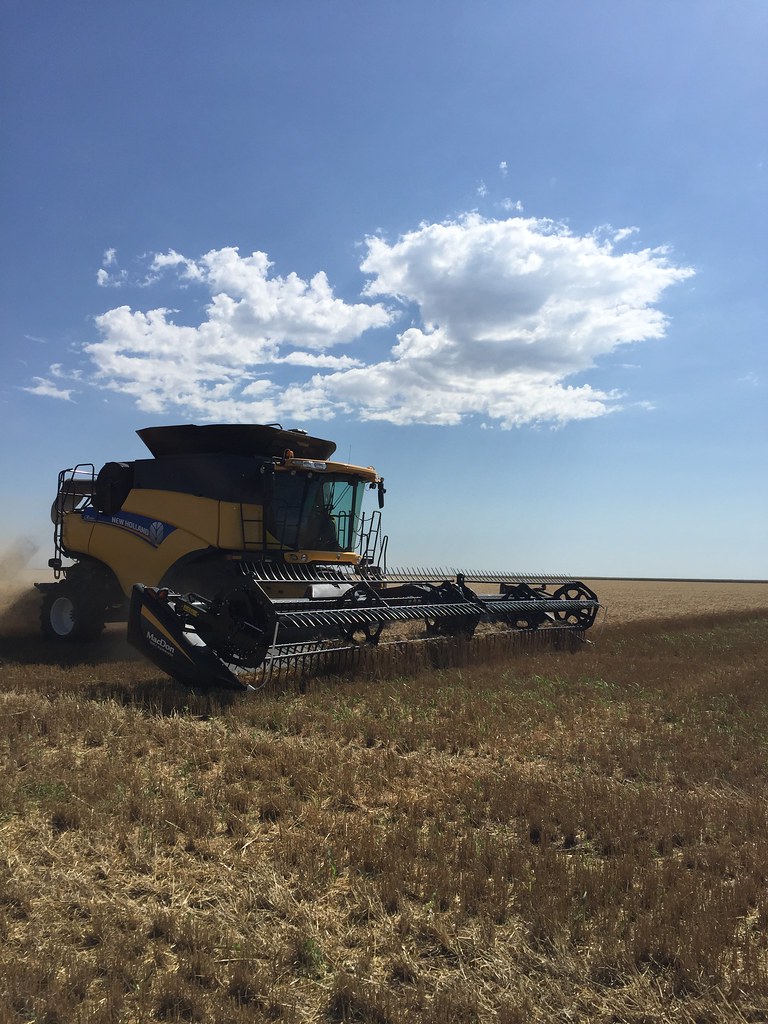 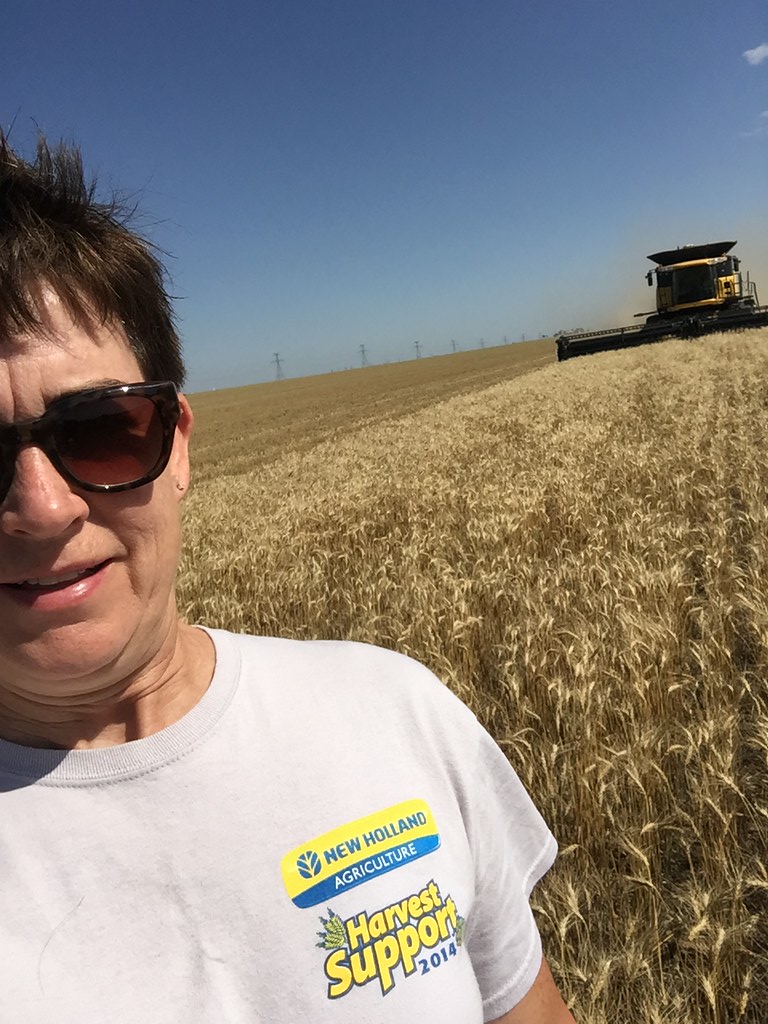 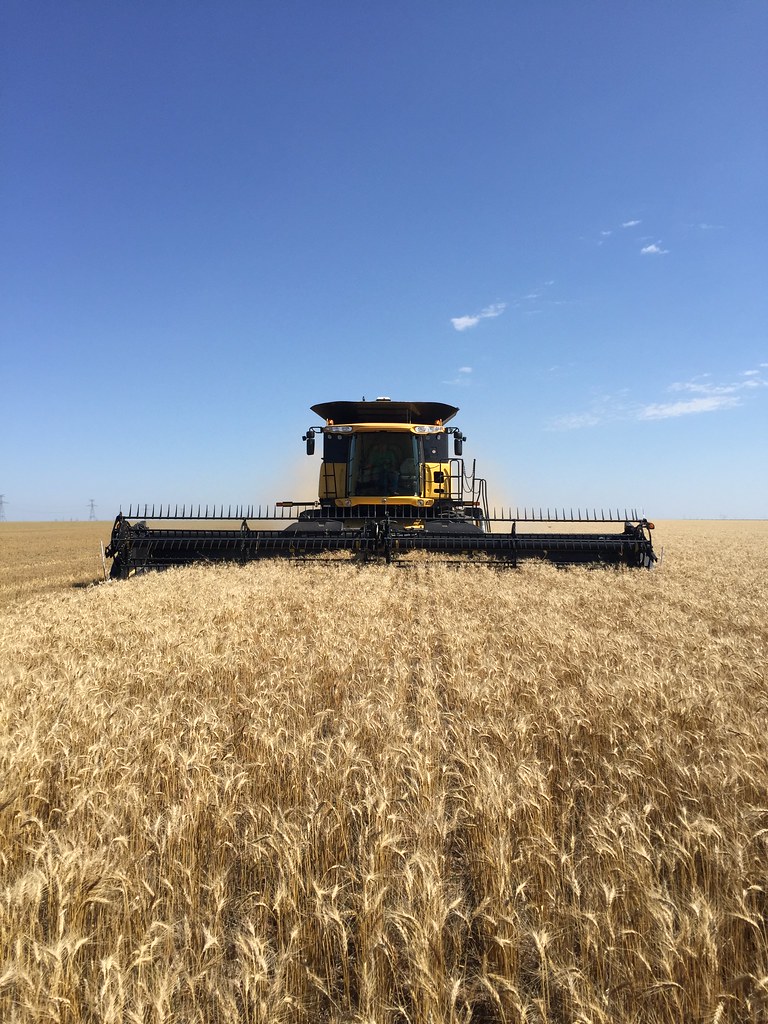 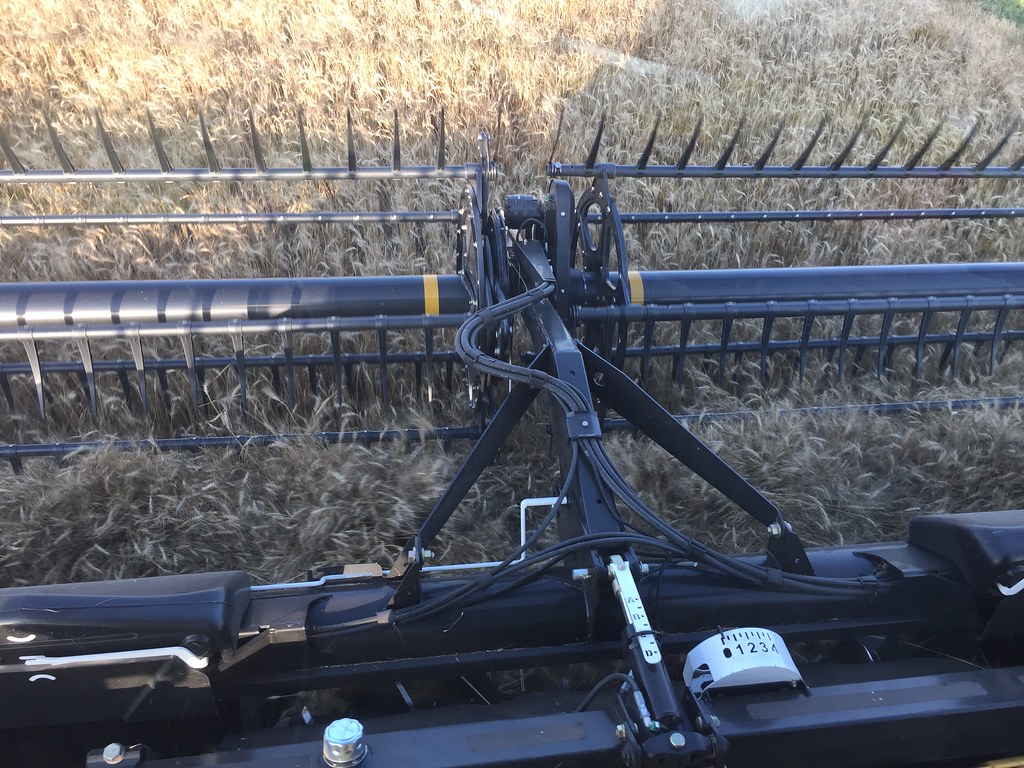 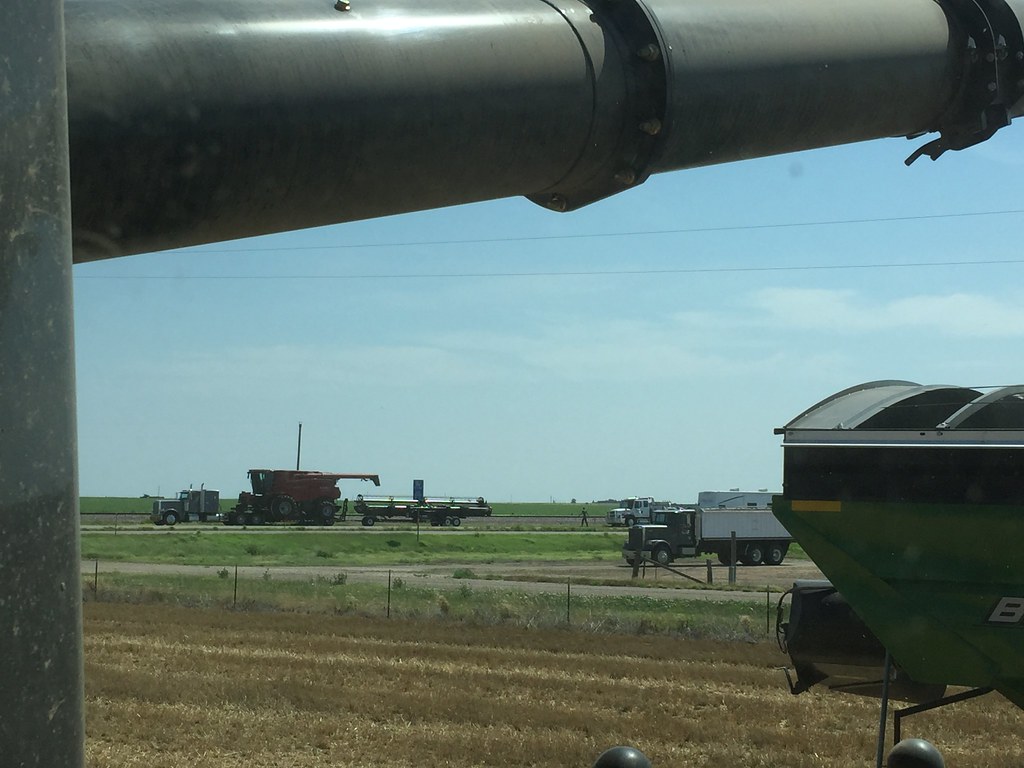 The field we were cutting in was right along a major highway. It’s probably the busiest four-lane highway I have ever seen. Trying to get across it is like trying to get across the Interstate. It’s SCARY! This was the sight I saw as I pulled up to the grain cart to dump. Another harvester! I get so excited when I see loaded combines. I wanted to shut the machine off and quick run over and see who it might be—just to say hello to a fellow “wheatie.” Later, through Facebook, I learned it was Dolechek Harvesting headed to their next job. Good to see you…even if I couldn’t stop and say hello.

So the next thing we would need to do is get the housing unit off and the bad bearing out. That was much harder than you would think or hope on a hot afternoon. The tool that would make the job much easier was something we didn’t have. So, Jim called our farmer. He had to let him know we were broke down and wondered if he would happen to have the necessary tool that would make the job easier. There’s nothing better than tools! He (the farmer) thought he did and he’d bring it right over. While we were waiting, Jim made a phone call hoping to get an easy fix to our situation. Unfortunately, that wasn’t the case. 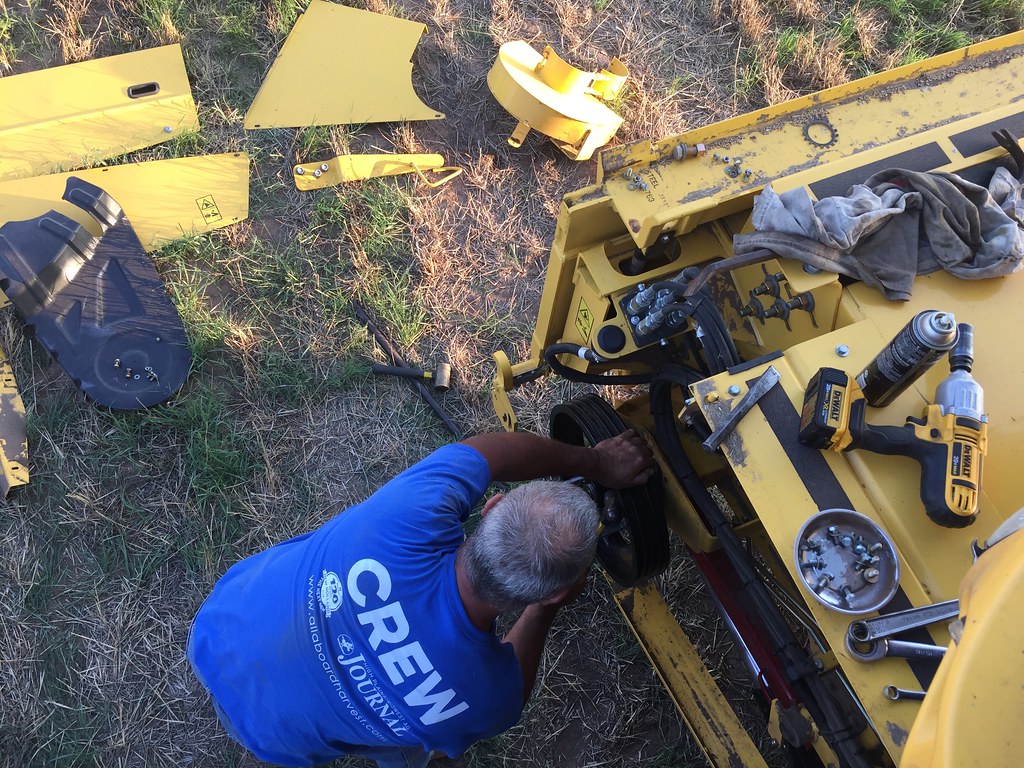 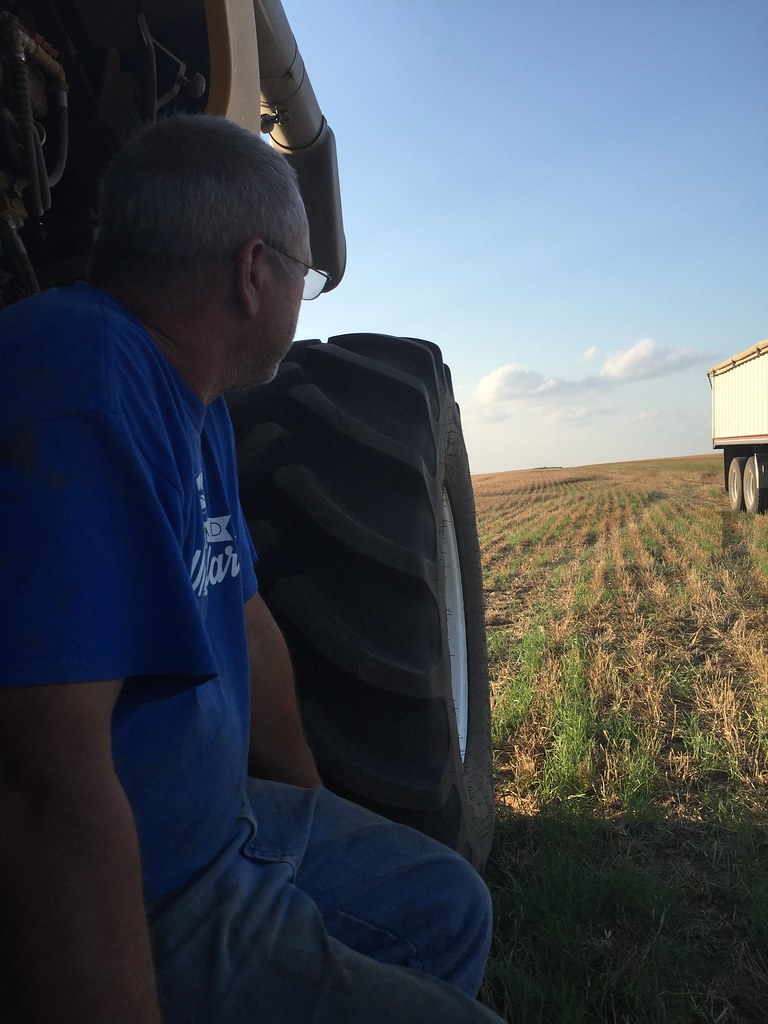 The stress of being broke down and not knowing how to get the necessary replacement was wearing on Jim. He had been hauling to a grain bin all day, so the heat of the day hadn’t helped with how he was feeling right then. While we waited for the farmer to show up with the tool he would need, he decided to sit in the shade the combine provided. 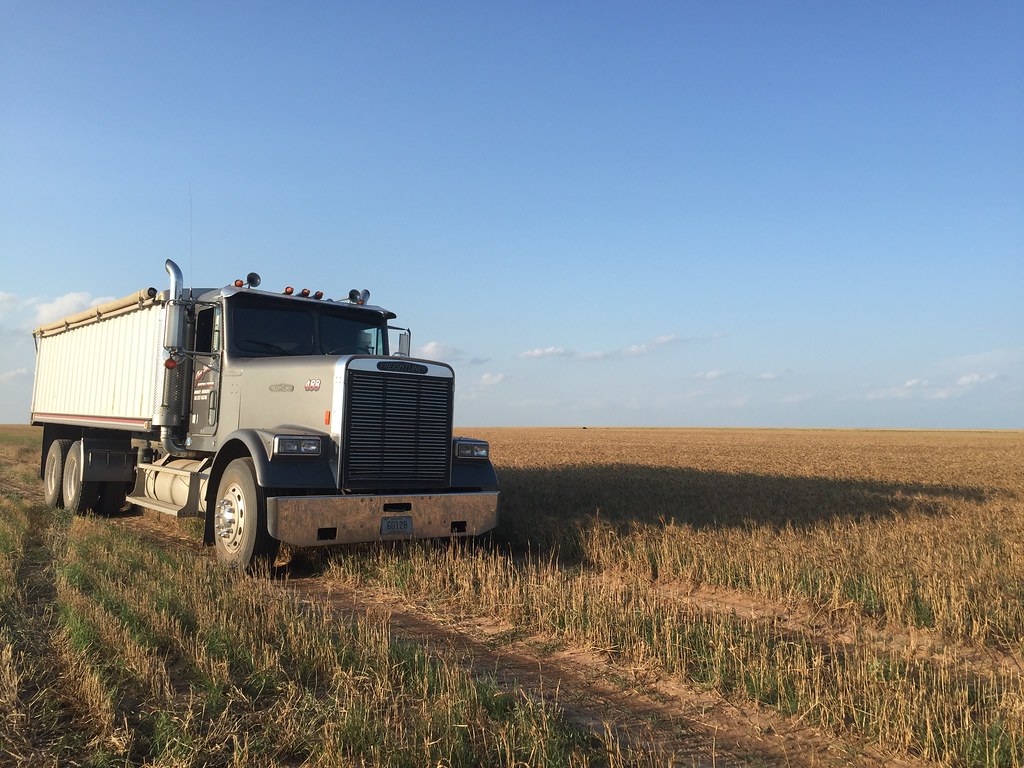 My favorite part of the day—when the long shadows begin to appear and the heat of the day gives way to the coolness of the evening. 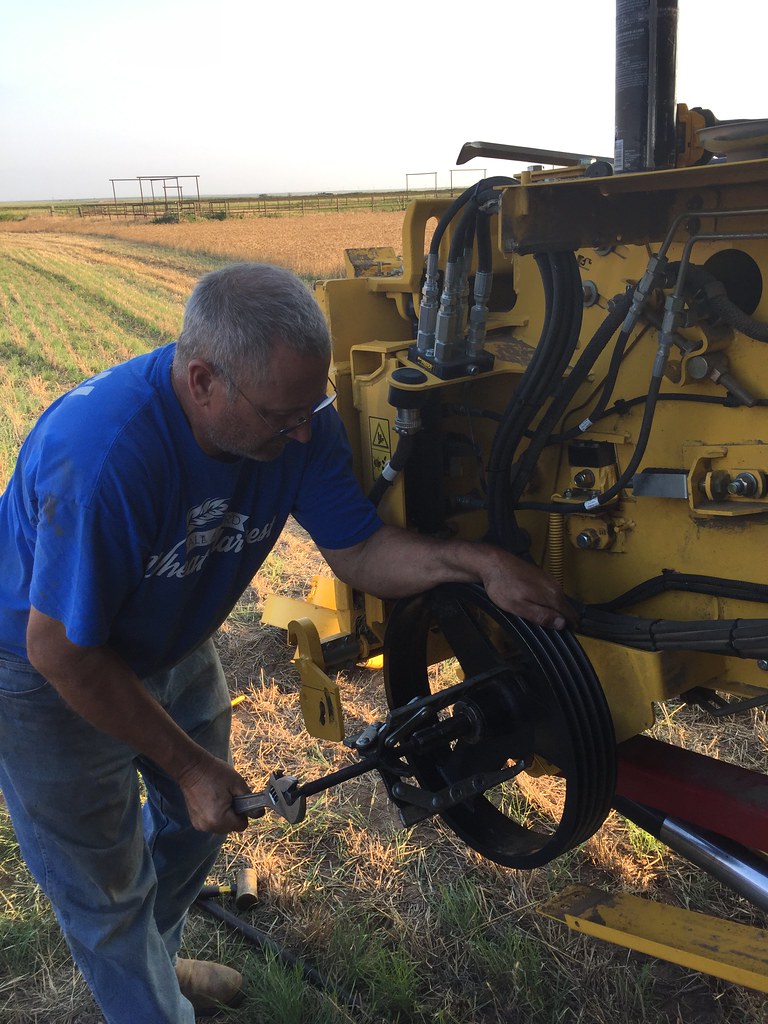 The right tools make all the difference! 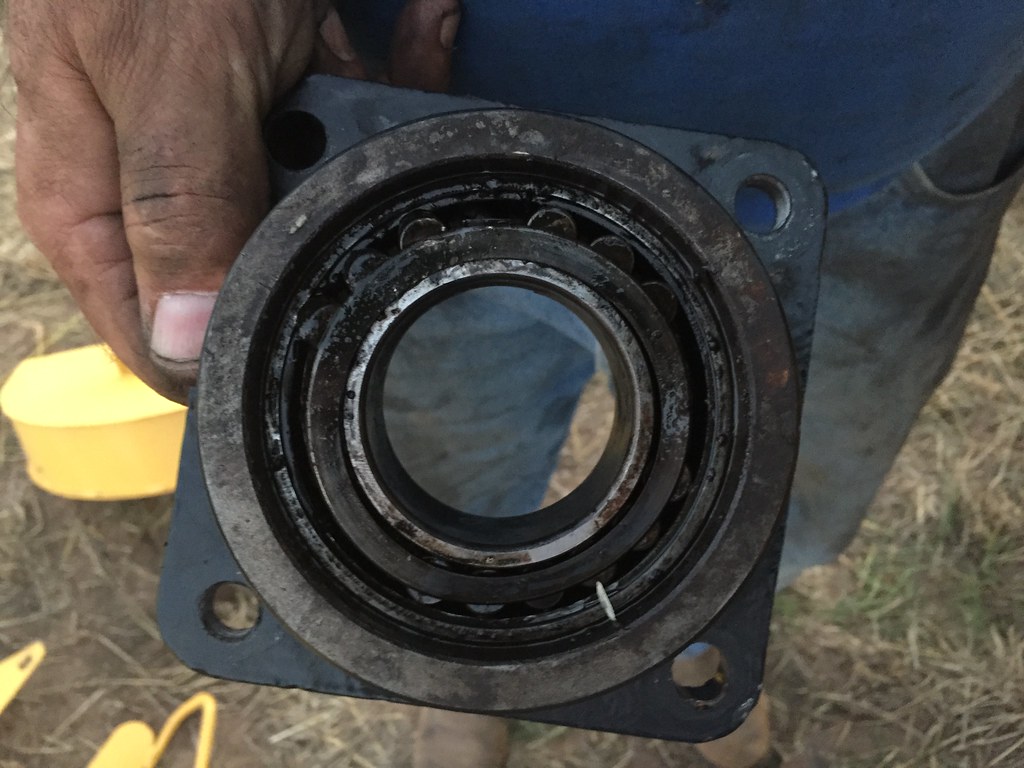 This was the problem. 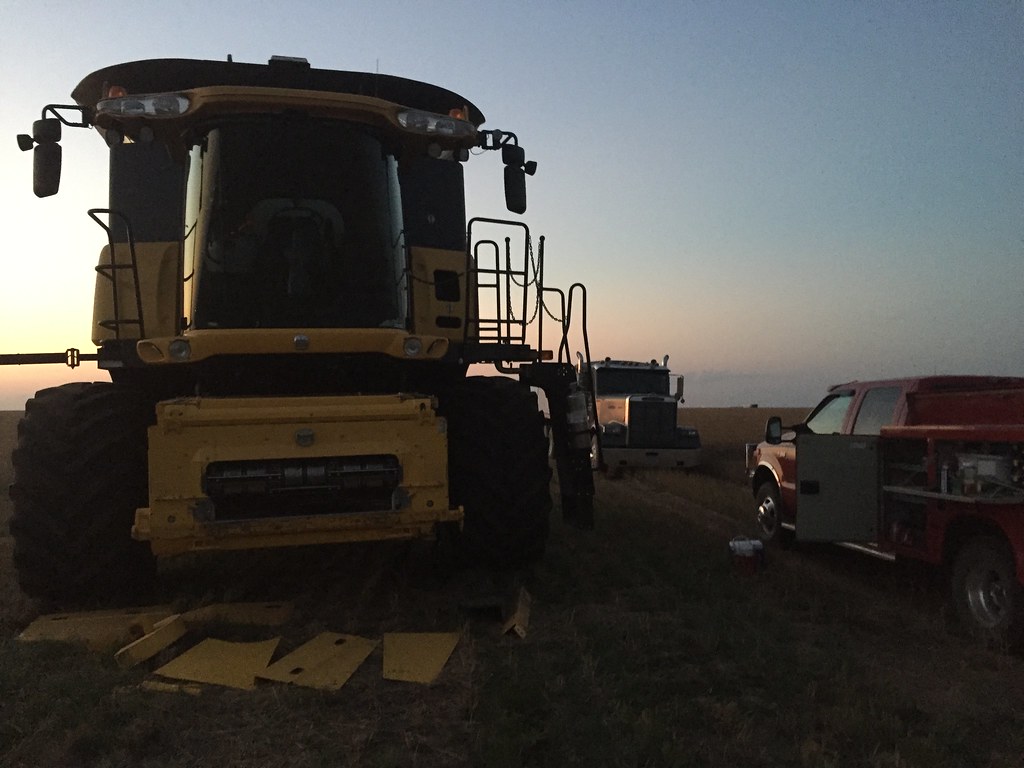 When we left the field that night, we still didn’t have the answers we had hoped we would for getting the replacement bearing in our hands so we could be up and running again the next day. We called Mark Rathe with KanEquip (our New Holland Dealer) out of Syracuse, Nebraska. If anyone could find one, he could. And he did and he would also have someone pick it up at the store in Ellsworth, Kansas, for us and meet us halfway. Awesome! We have a plan. Going above and beyond! This all took place about 11 p.m. on Saturday night.

Yesterday—Father’s Day—we headed north to meet Jerry Shippers with New Holland (from Salina) in Meade, Kansas. It was only three hours…one way. In the world we live in outside of harvest, we would never think about driving three hours somewhere and turning right around and driving three hours back. Never! But, in the harvest world, you do weird things like that. We do weird things like that because this is our livelihood. This is the job we have. We have farmers counting on us to get their crops harvested in a timely manner. Things break and parts have to be found and everyone knows this. However, there is always a sense of urgency for the harvester to get the machinery repaired because every minute of down time could be critical to both the harvester and to the farmer. Unfortunately, our minor repair took all day. 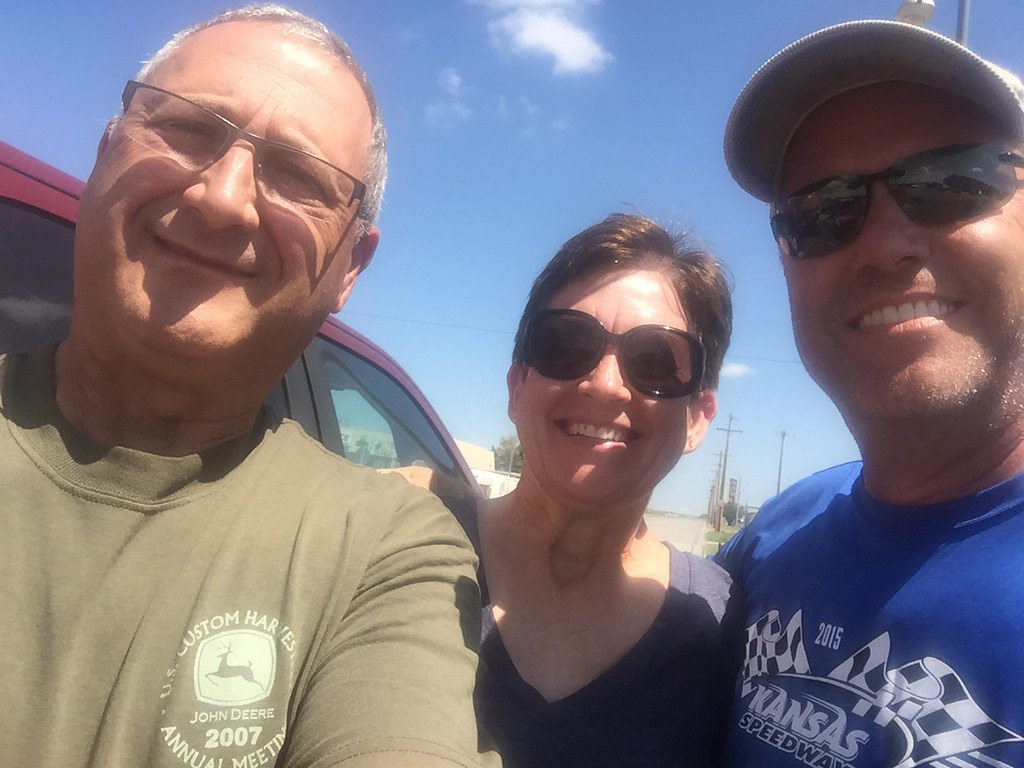 Jerry, thank you for going above and beyond (on Father’s Day no less)! You said you would deliver parts to us if we were 1,000 miles away and I believe you were being sincere. It’s people like you and Mark—the movers and the shakers of this world-—who “get ‘er done!” Our appreciation goes to your family, as well, for being understanding—this took six hours out of your day and away from them! 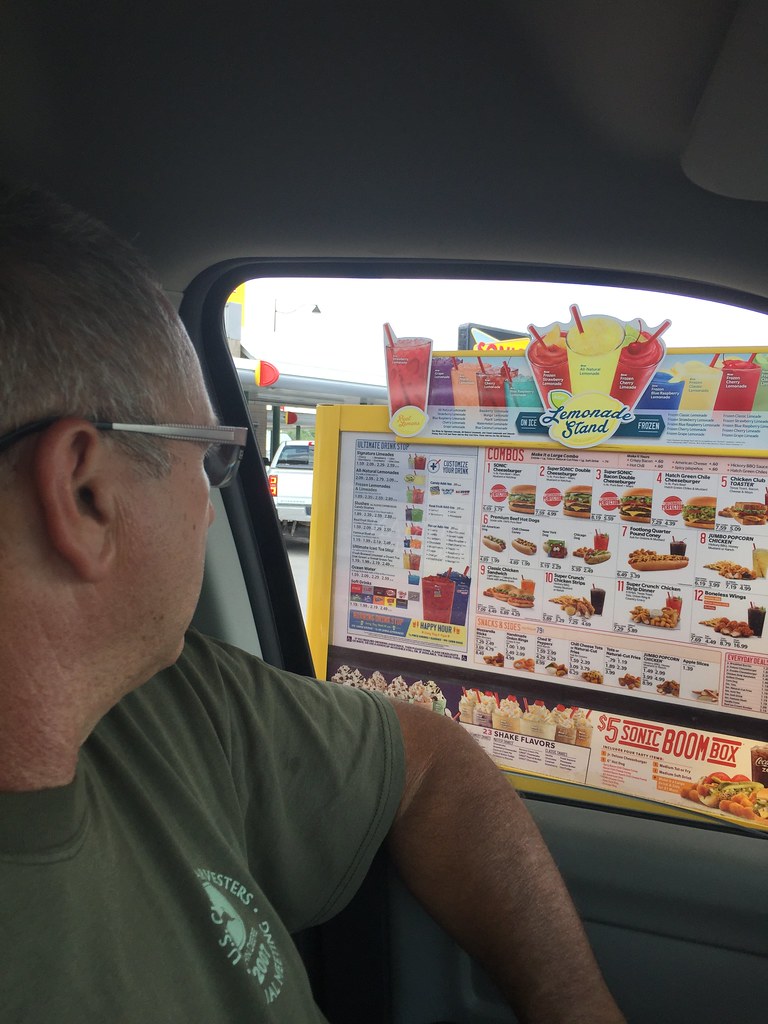 “I’ve never had a #3…I’m going all out,” says Jimbo as he’s looking over the Sonic menu. As you should—it’s Father’s Day! 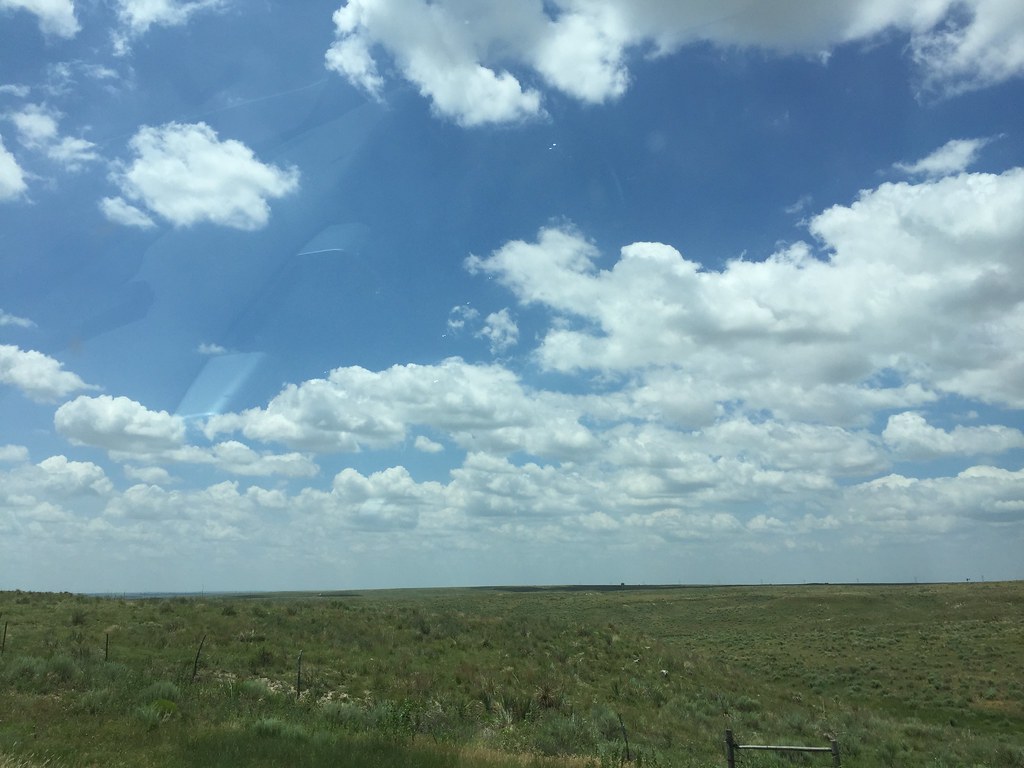 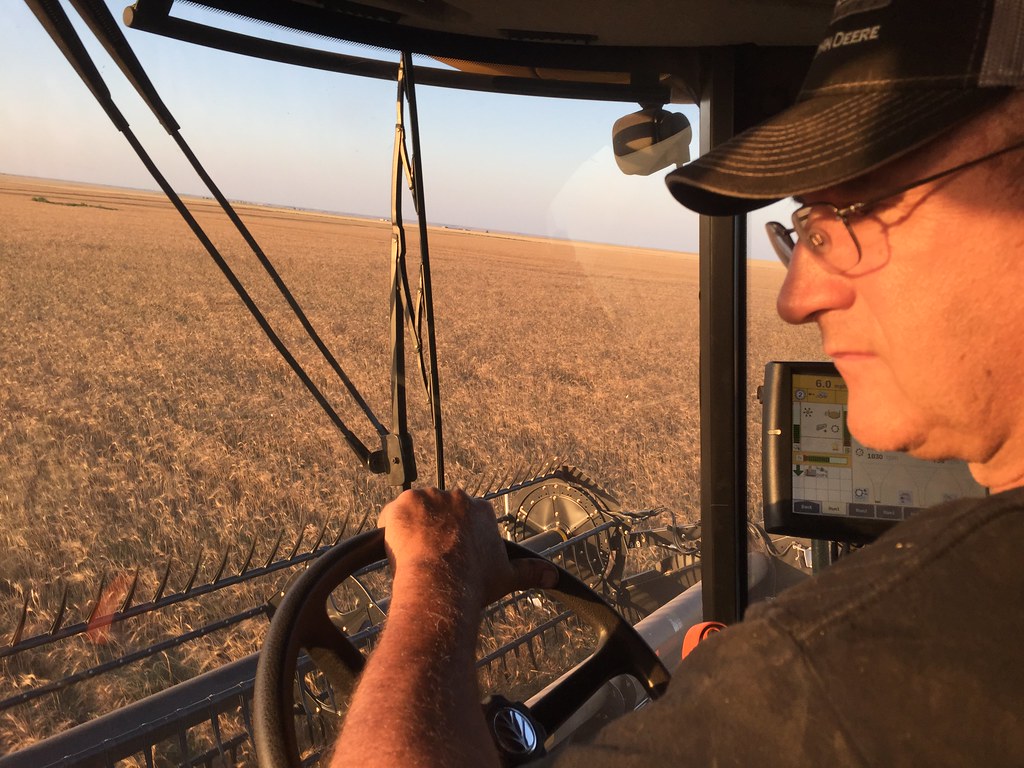 The day was LONG but it had a happy ending—the Beast was fixed and we were once again making dust. 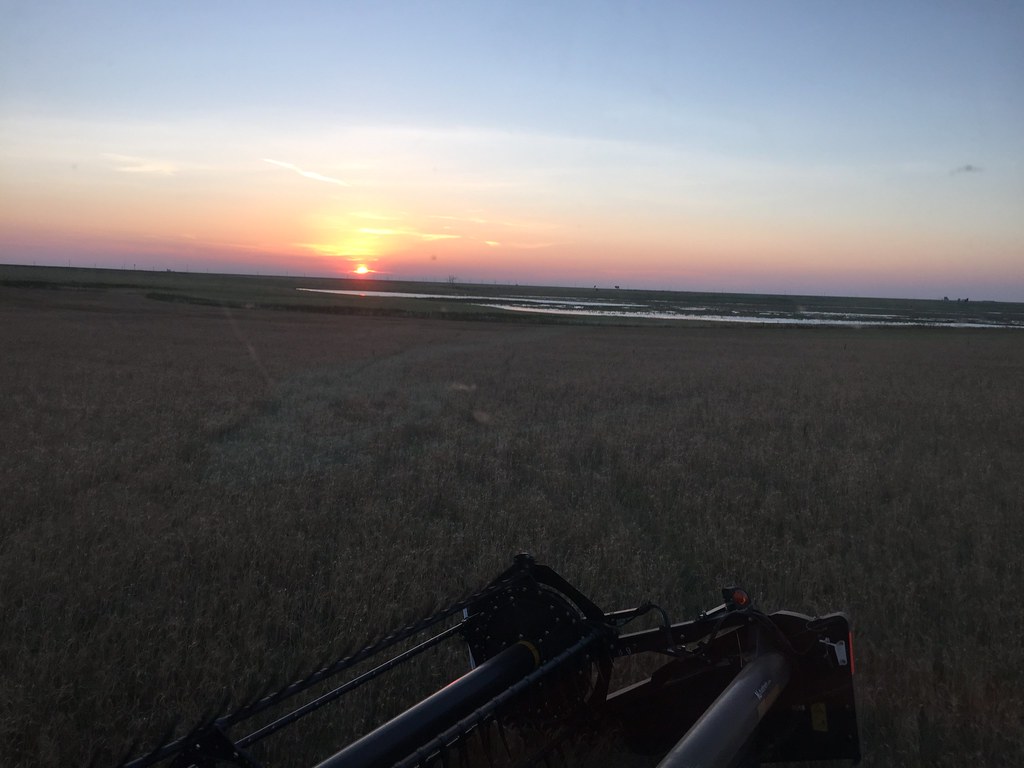