All Aboard Harvest | Rain Drops Keep Falling on my Head
13183
post-template-default,single,single-post,postid-13183,single-format-standard,qode-quick-links-1.0,ajax_fade,page_not_loaded,,qode-theme-ver-11.2,qode-theme-bridge,wpb-js-composer js-comp-ver-5.4.7,vc_responsive

Sharon Springs, Kansas: We made it! And by “we”, I mean the kids and I. The crew beat us here by a couple of days. It’s hard to believe we got just a smidge over three unexpected weeks at home. The first week was just a whirl wind trying to do harvest meals and regain control of our lives and mail after being gone so long. The second week brought on a false sense of calm that we were gradually returning to a more normal home routine.   By the third week I began to wake from my home utopia and get a little anxious about getting back on the road knowing we still have a good chunk of the season left.

The rains essentially delayed my home departure. Hind sight is always twenty-twenty, but if I would have known the crew with Ryan was to be in Scott City as long as they were, we would have rejoined them there. Instead, we kept plugging away at home taking care of office/home things. Rain allowed Ryan to swing home just prior to the Fourth of July for a couple days to take care of some paper work and other mid season items before heading back to Scott City. We met the crew there, and had the opportunity to celebrate the holiday with our farmers, their family, and friends. It was a fun evening and Little Man was old enough to enjoy the festivities, but Lady A wasn’t quite as sure so she and I had to call it quits and head back to the camper before the big action got underway.

The next morning the kids and I headed back home to pack up for good as it was determined that Sharon Springs would be ready. The guys headed west and got going Tuesday afternoon. I’ve learned that when preparing to leave for harvest it takes me a ridiculous amount of time with two littles; the unexpected is expected!   Finally, Thursday night I deemed the house/office in good enough shape to leave and hit the road for potentially until the end of wheat harvest. We popped in on Ryan’s mom on the way and a thunderstorm moved through late in the evening which allowed us a little more time with her as we rode it out at her home before moving on. We finally arrived at the camper around twelve, but still didn’t beat the guys back from the field. They’ve really been burning the midnight oil trying to cut whenever possible in between chances of rain.

Speaking of the continued rain, the other day, the old song, “Rain Drops Keep Falling on My Head”, popped into my head. Maybe it should be in the running for the summer’s theme song. Lyrics like, ” So I just did me some talkin’ to the sun, And I said I didn’t like the way he’ got things done, Sleepin’ on the job”, seem pretty appropriate. And, “I’m never gonna stop the rain by complaining.” It is a good reminder to take the good with the bad, and sometimes the bad makes something good. This rain has been tough for wheat harvest but great for fall crops. Western Kansas is so beautifully green right now which is so refreshing to see midsummer.

I worked several summers at a full service ag center when I was home from college. I can’t remember the exact details of the summer, but it was very dry. One day, a customer and I were looking at the computer and in attempt to sound positive, probably naively so, pointed out a slim chance of rain on the forecast (let’s say it was a 30% chance). I remember he replied, “Yeah, but that’s also a 70% chance it’s NOT going to rain!” And, he was right, as is so often the case in western Kansas. Right now the opposite is happening. If there’s a 30% chance, we very likely will have rain.

Yes, rain drops may or may not keep falling on my head this season.  Either way, I need to keep this and other things I can’t control in perspective.  No, “The blues they send to meet me won’t defeat me…” We’ll keep plugging away and take each day as it comes.  That’s all we can do. 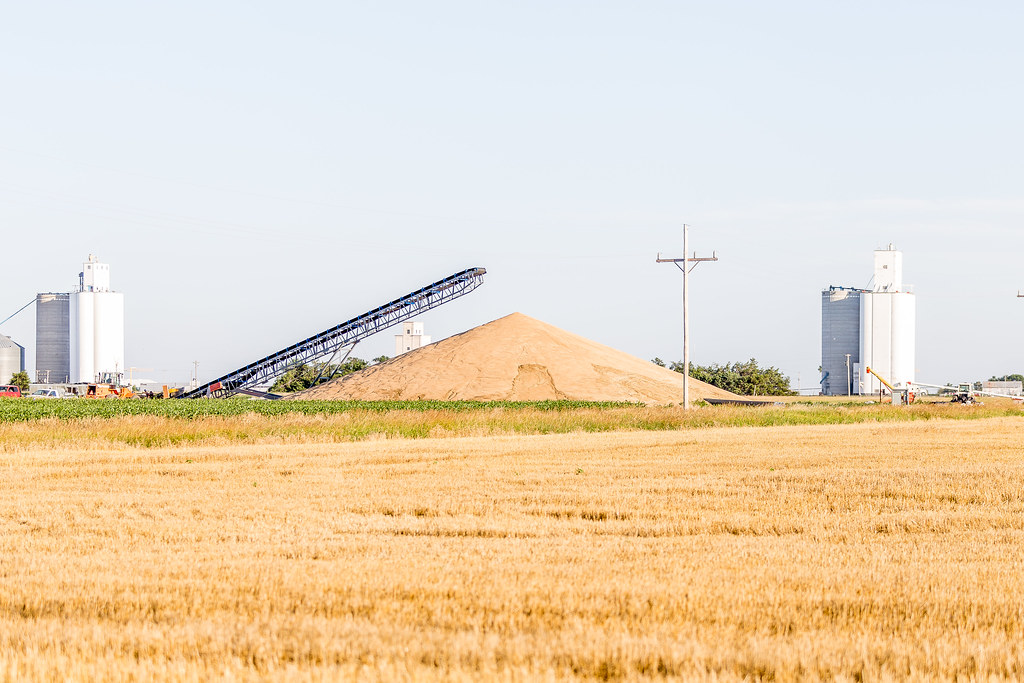 The ground pile of wheat at Park, Kansas. 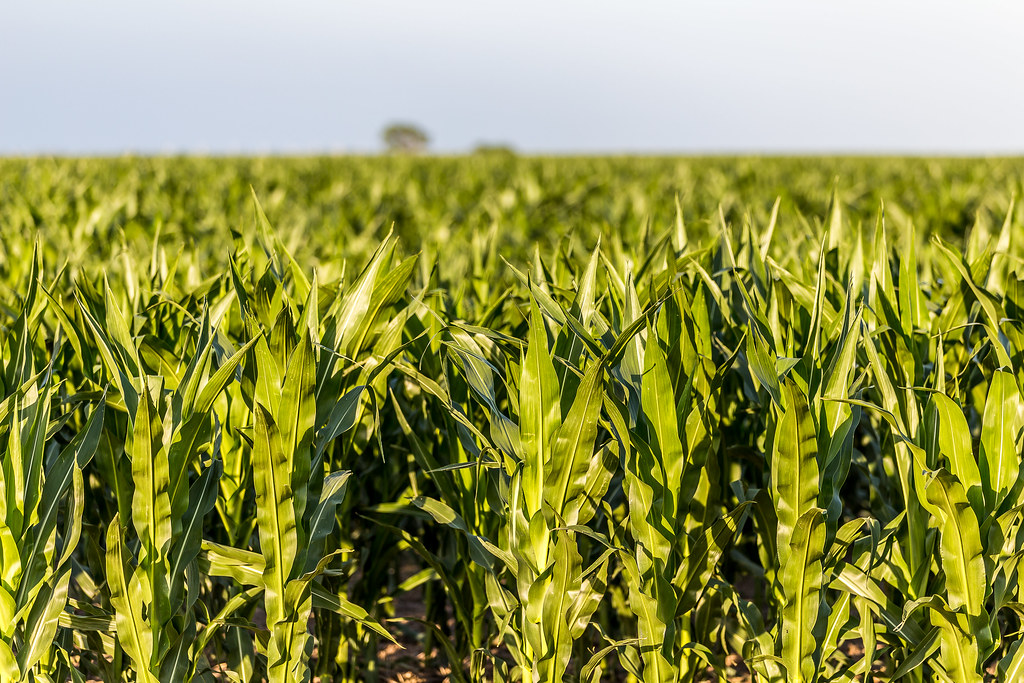 We had to swing by and check on our corn. The rain has been helping it and other crops to be harvested this fall. 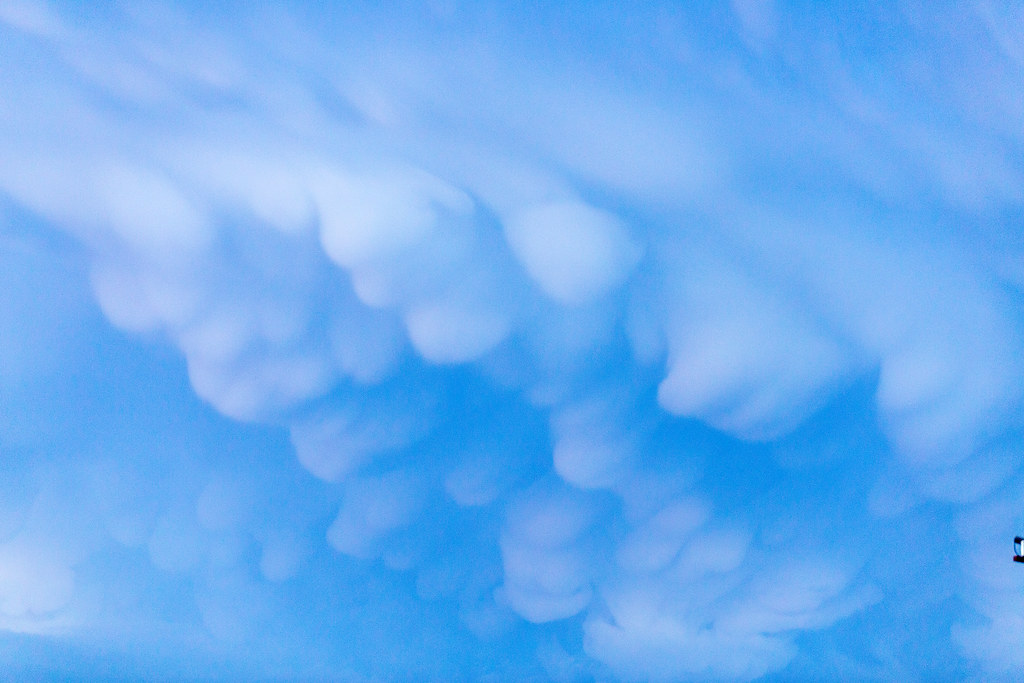 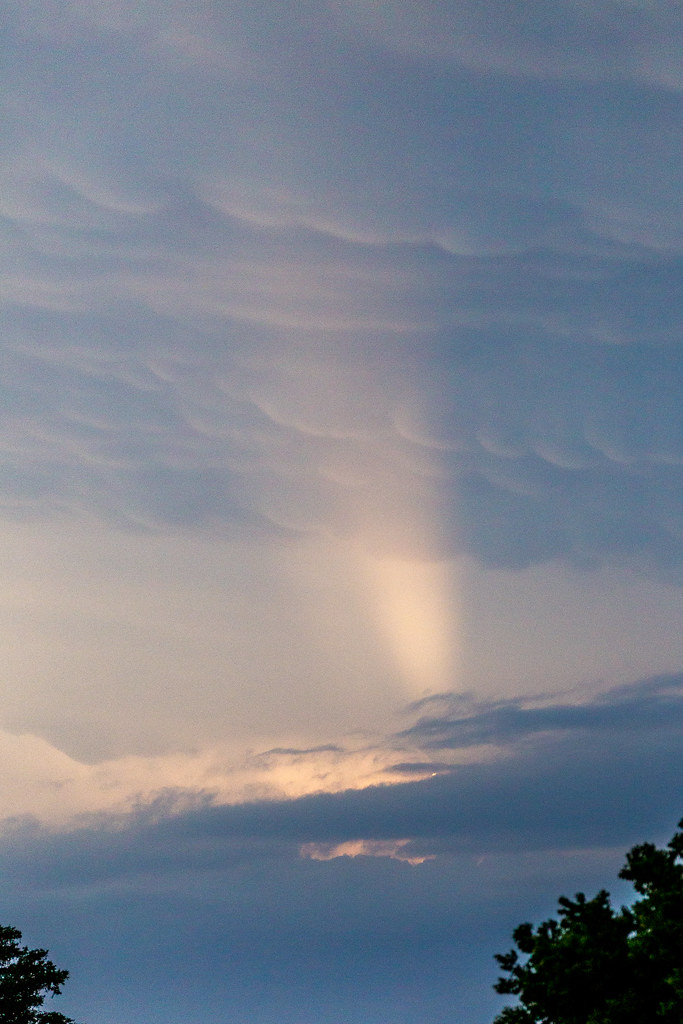 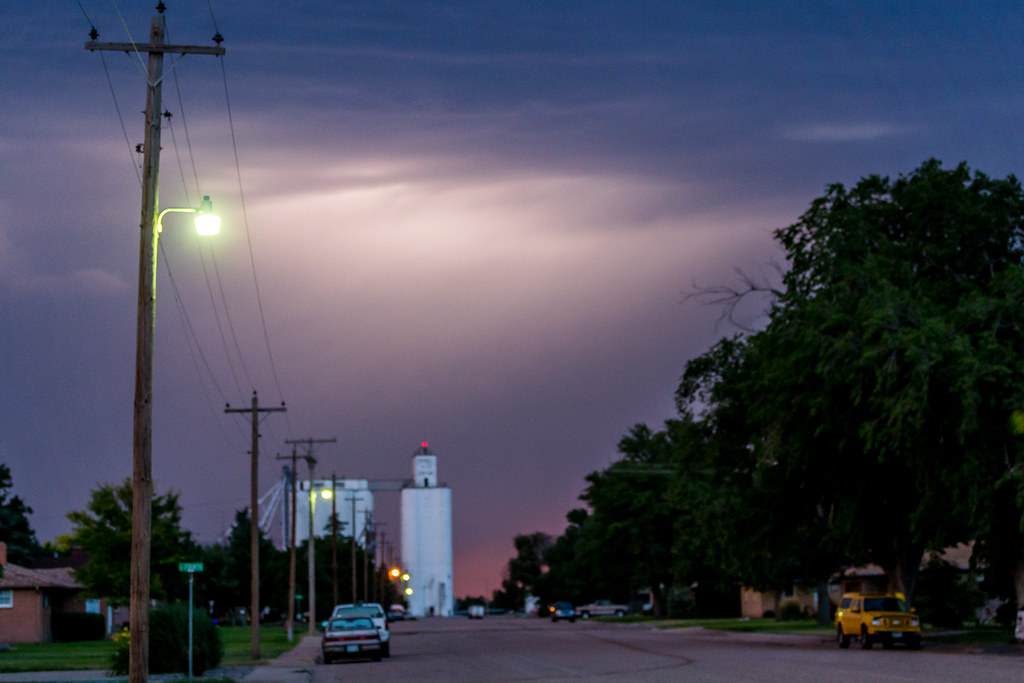 Lightening over the elevators.

aawh, agriculture, All Aboard, Kansas, wheat