All Aboard Harvest | It’s All About Relationships
13376
post-template-default,single,single-post,postid-13376,single-format-standard,qode-quick-links-1.0,ajax_fade,page_not_loaded,,qode-theme-ver-11.2,qode-theme-bridge,wpb-js-composer js-comp-ver-5.4.7,vc_responsive

It’s All About Relationships

31 Jul It’s All About Relationships

Matheson, Colorado –
We finished with the acres we came back to Limon for. Ryan and Casey told us we could help them with their job so they could be finished in decent time to make their way back home to Del Norte, Colorado. If you check a map, you’ll see they live in the San Luis Valley or simply referred to as “The Valley” to the custom harvesters. I’ve heard about “The Valley” for quite a few years. We have other harvester friends who have made their way to “The Valley” at the same time we made our way to Montana. Because our journey to Montana has been put on hold due to the wheat ripening at the same time as the Colorado acres, we will be making our way to “The Valley” after we finish with the additional acres we’ve picked up. Yep, we’ve got a couple more days of wheat to cut in the area. The same farmers that we’ve cut for the past several years asked us if we could help them get their acres finished up. Once we get finished here, we will begin a new adventure in “The Valley” thanks to Ryan and Casey. 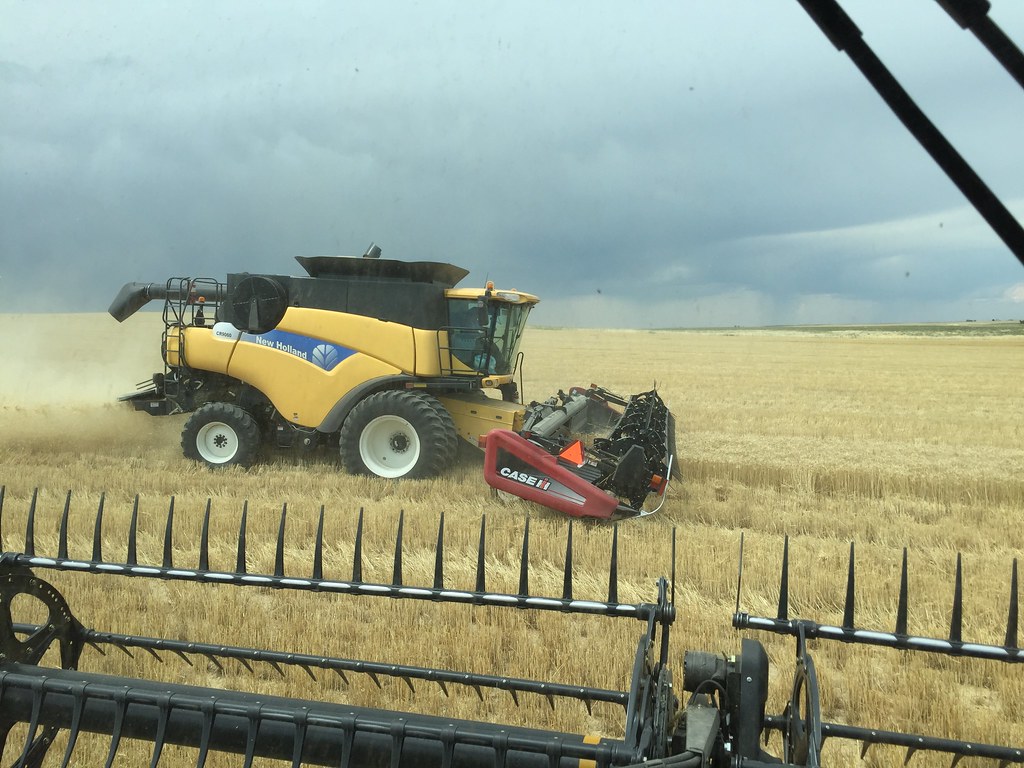 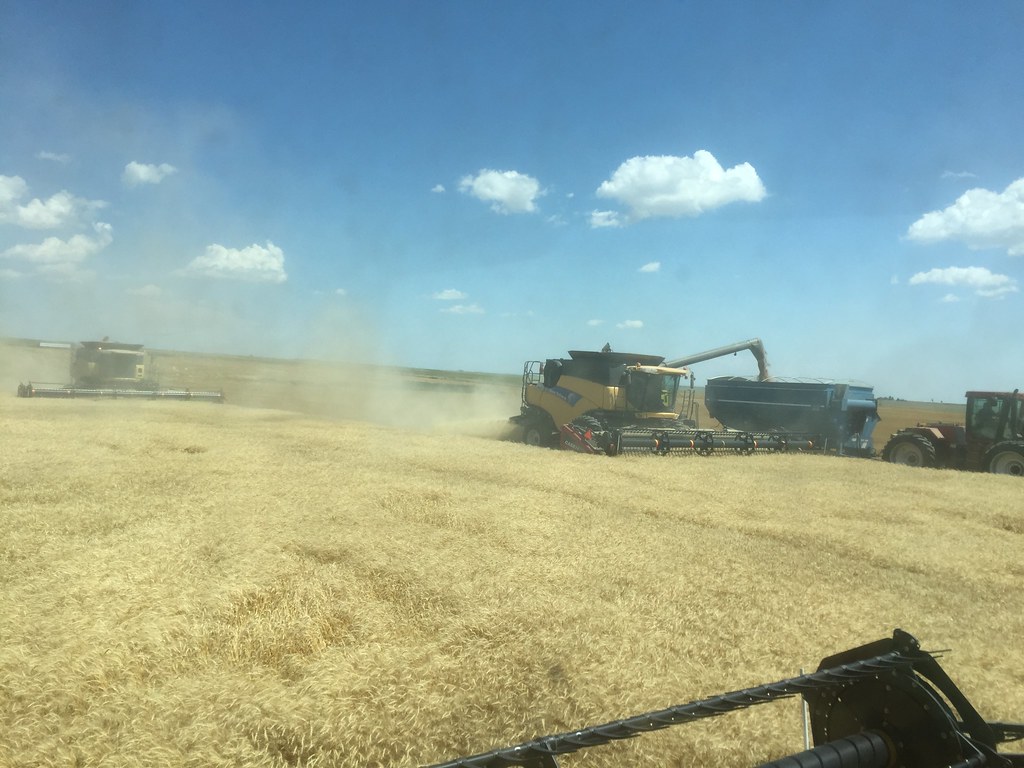 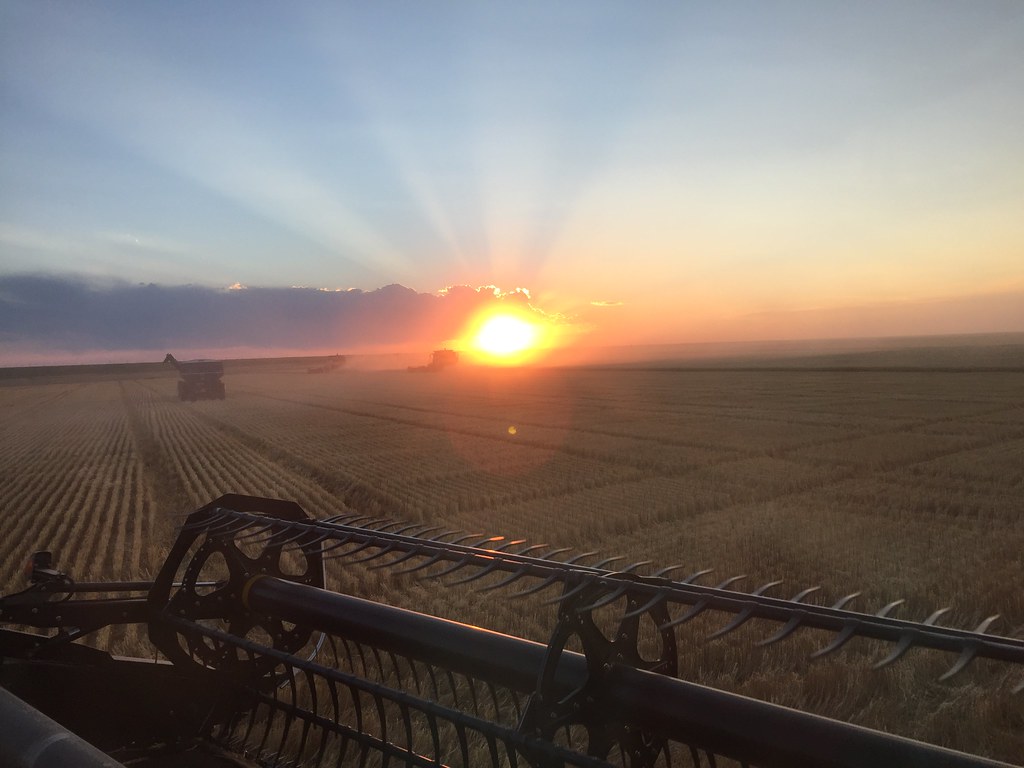 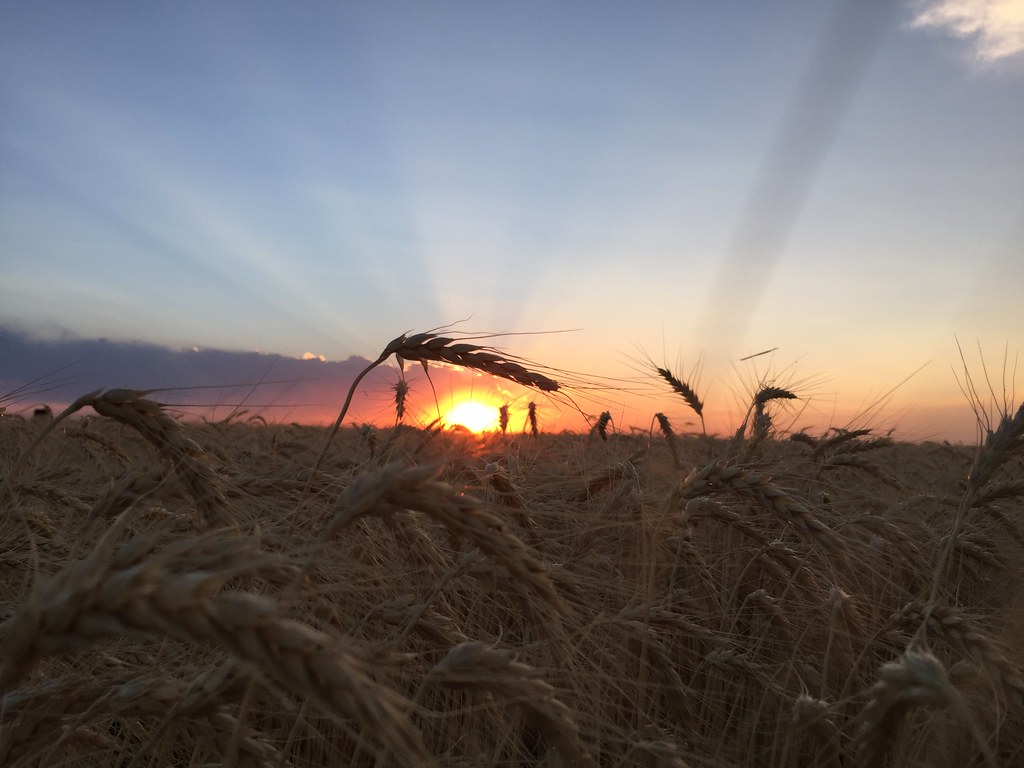 Jim had an idea for something special he wanted to put on the combine in honor of Wes. In real time, we’ve only known the Maranville’s less than a year. We’ve helped them cut their wheat since 2012 and have become pretty close to the entire family. When I received word of Wesley’s death in December, it literally sucked the air right out of my lungs. The text I received from Taylor at 2:00 am was read and reread many times before I allowed the words to sink into my head. It had to be a mistake! Wes was playing basketball with his Simla Jr. High team when he collapsed. Wes had an unknown heart defect and there was no way it would have been detected. He was the best grain cart driver…ever…but he also shared the same love for the combine as I do. This has been a tough harvest for everyone – especially his family. I finally put the decal (created by Jenna) on the combine. I think I had been putting it off simply because I was wanting to deny the fact. Things like this happen to other people – not to people you know and love. This has certainly made me realize that when you tell someone, “see ya next year,” you may not. Take the time to thoroughly enjoy those special times together as we’re not guaranteed a “next year.” 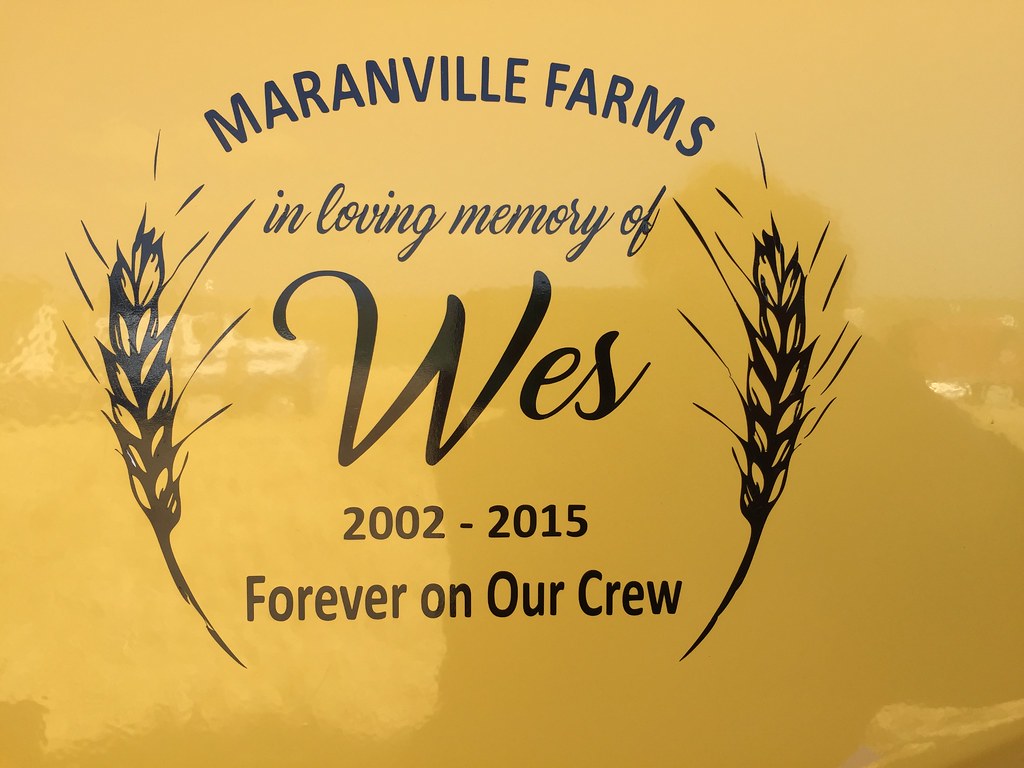 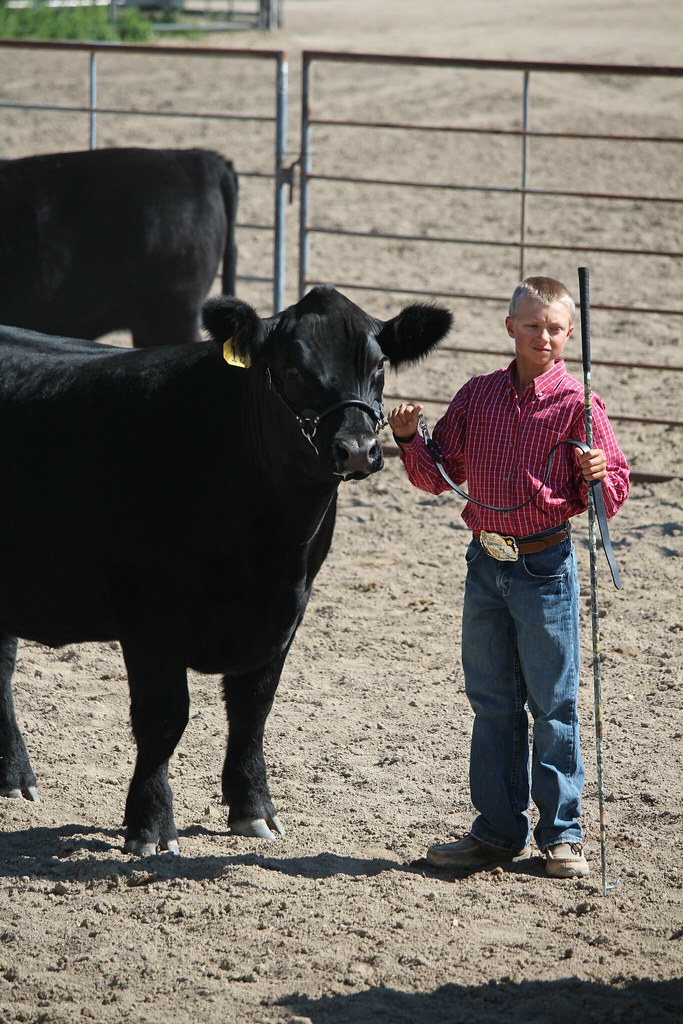 Taylor took this picture of Wes last summer while she was attending the fair with the family. Wasn’t he a cutie! 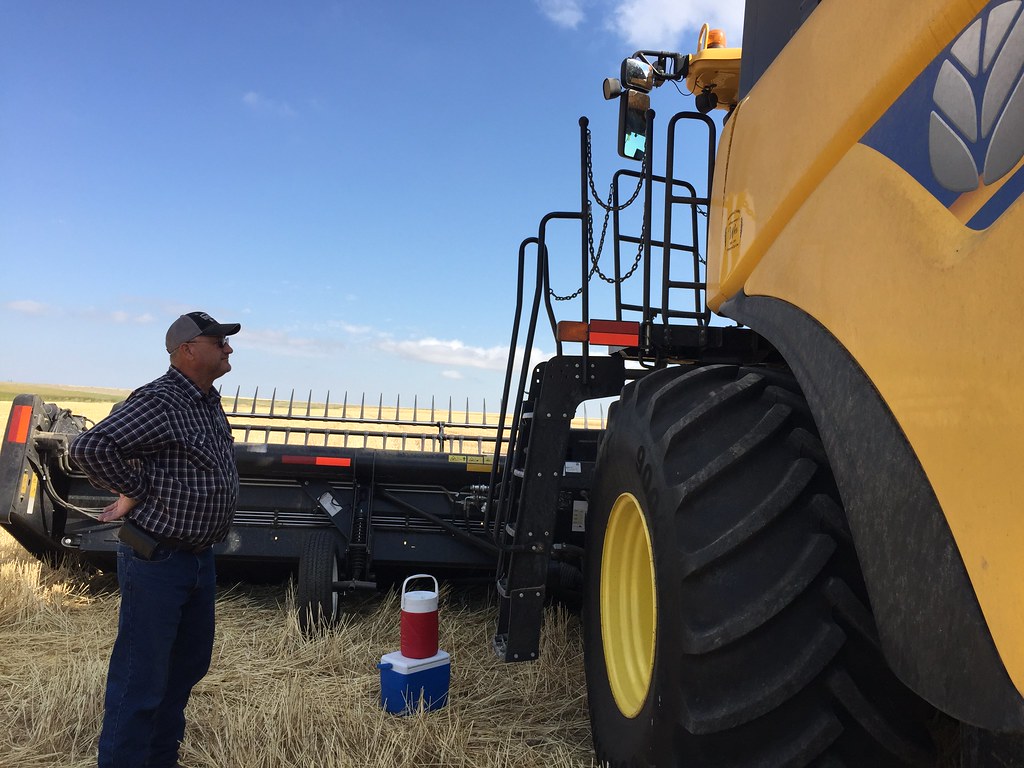 Jim looking at the decal and thinking about the one we have been missing.

We had a really good day of cutting on Thursday. As the sun was setting, the clouds began to move in. I heard something in the cab of the combine that didn’t sound quite right so I called Jim on the two-way to tell him I felt he should come listen. He drove the truck to the machine and jumped out. It was then that I realized the little clouds that had been forming absolutely blew up right over the top of us. It was an amazing scene to watch this particular cloud boil as it was moving east. It marched on and didn’t stop the combines. It was the next cloud that rolled over the field, however, that brought enough rain to keep us out of the field yesterday and part of Saturday. 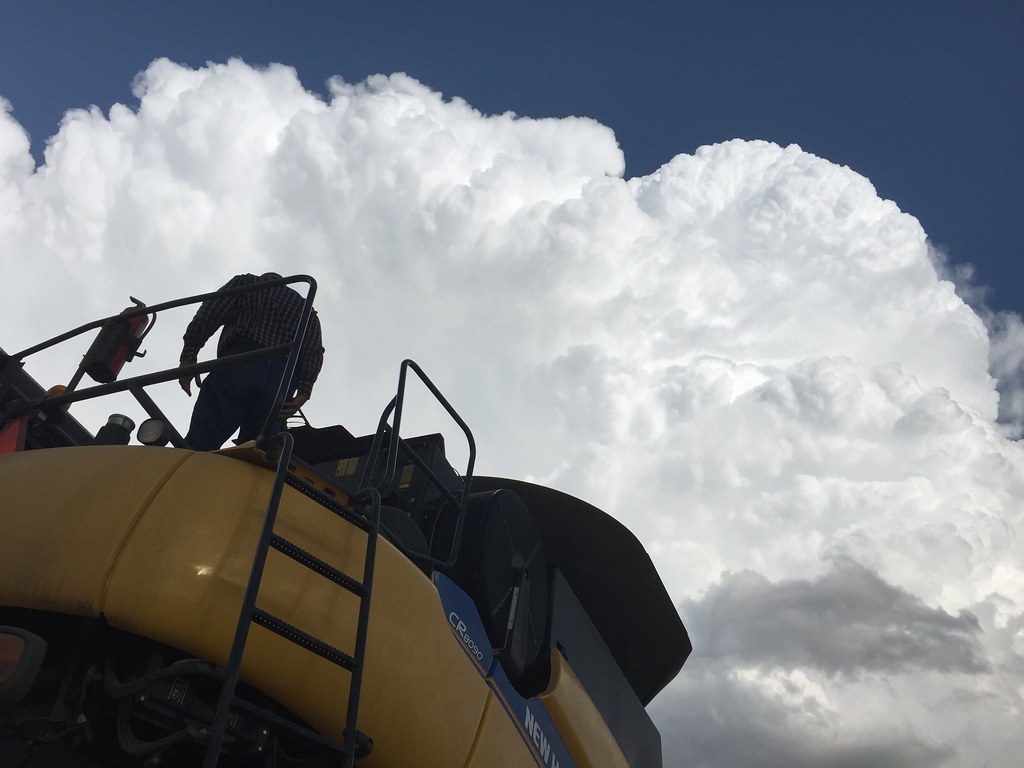 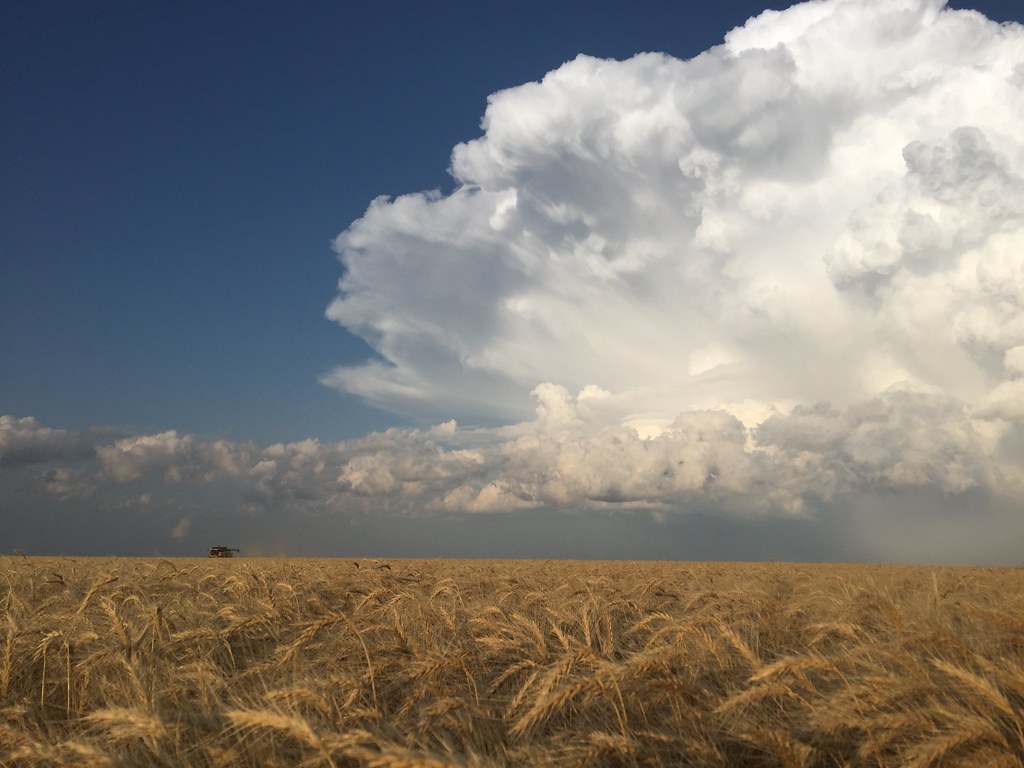 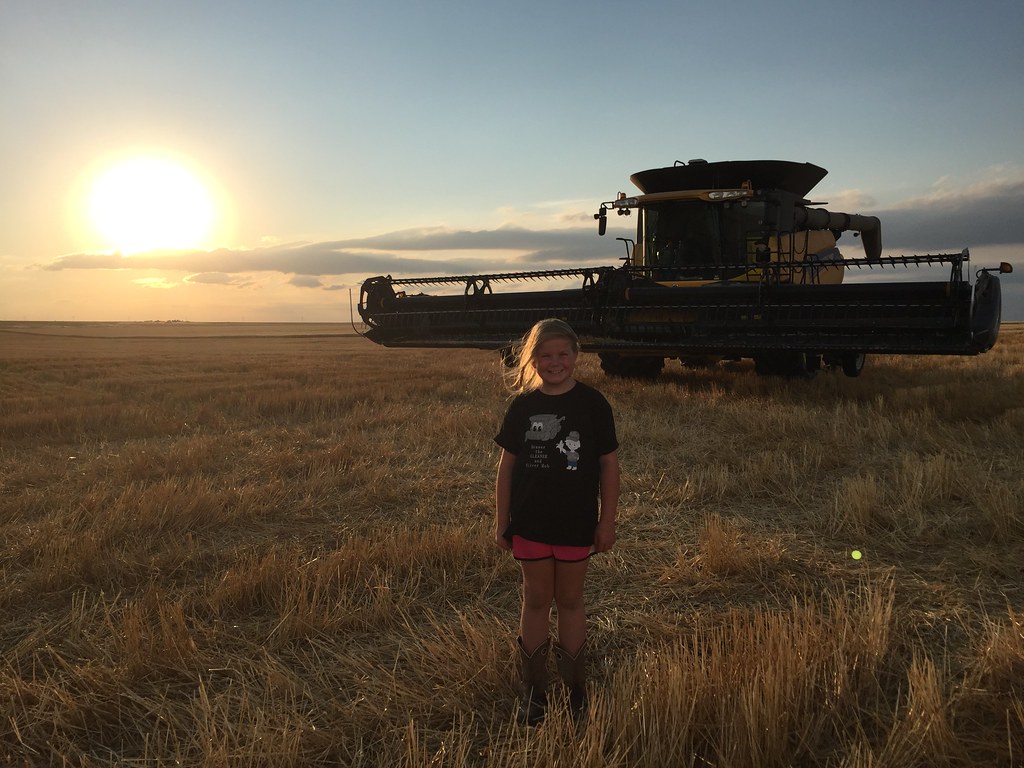 My co-pilot for the day – Haedyn Graham. 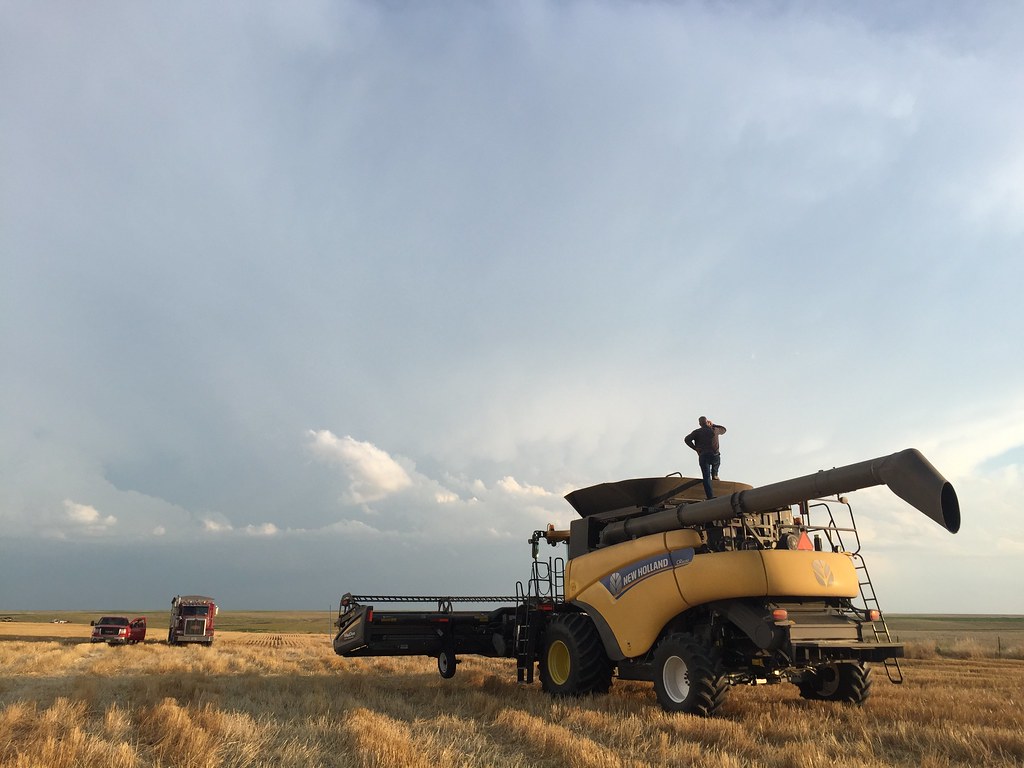 Jim had to make a phone call to Monte with the New Holland Harvest Support. The ONLY way you can get consistent cell service in this area is to stand on top of the combine…really! Jim was able to explain the noise and what he thought was wrong to Monte who helped him determine what part needed to be replaced. 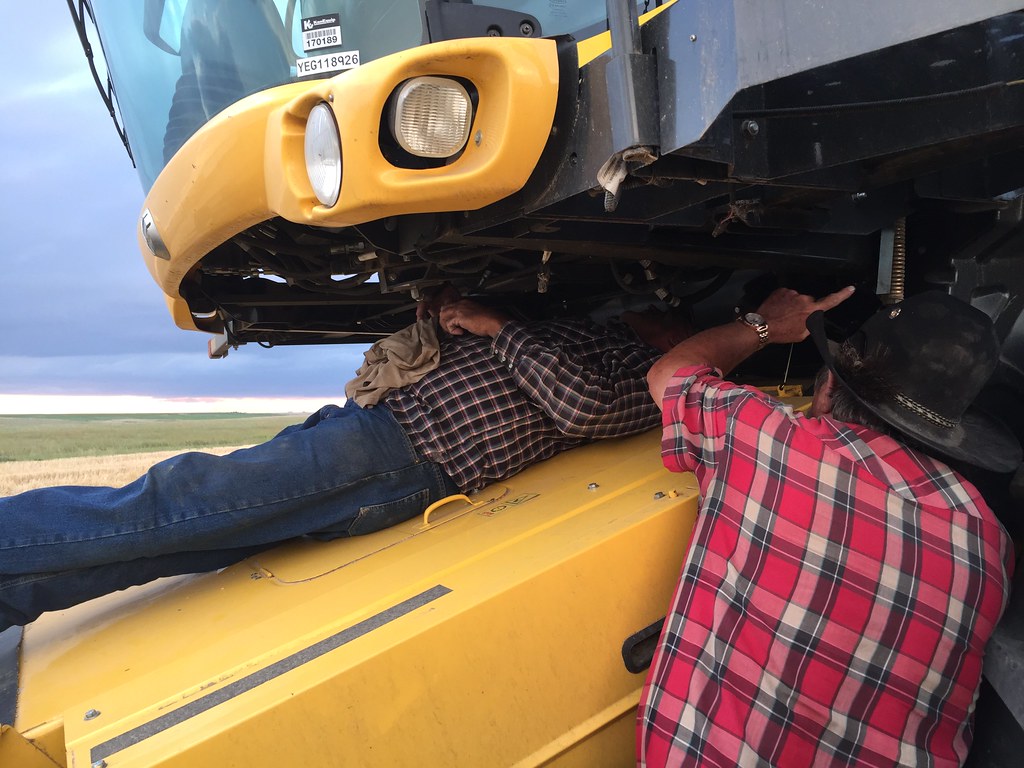 Jim and Dave trying to figure out the easiest way to replace the part needing replaced. 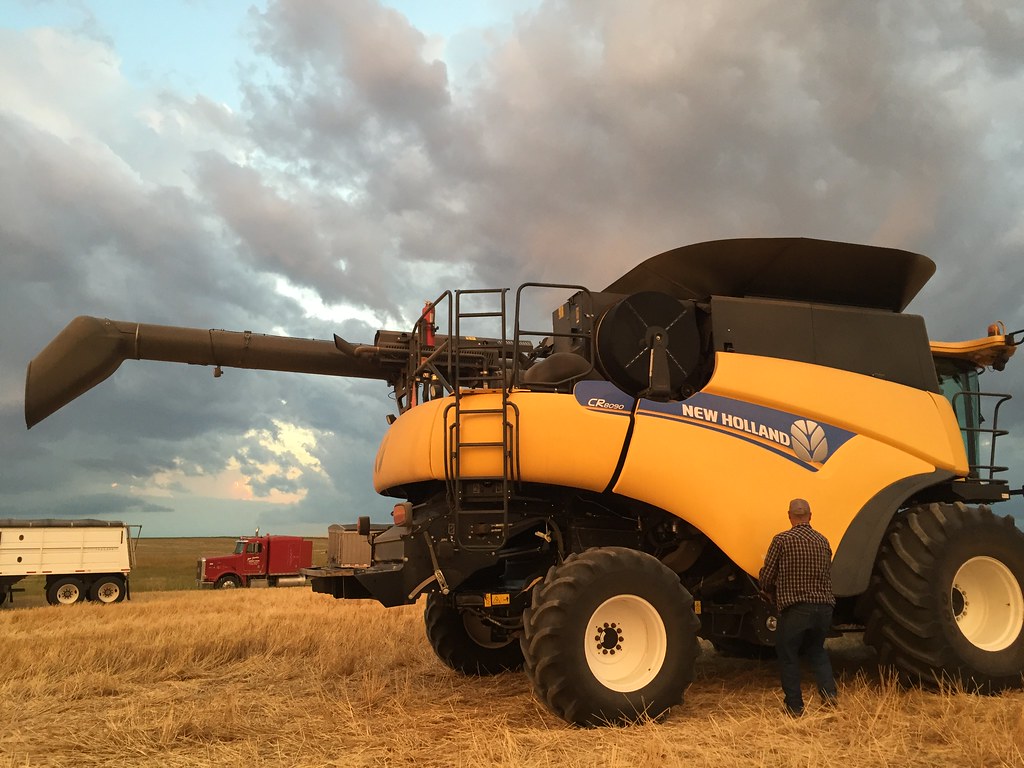 As it was, the rain day provided the perfect opportunity to make a trip to Goodland, KS to get the necessary part to make that cab noise disappear. Igor Kuzmenko with New Holland was in Limon. He’s here to visit with us and the Graham’s – and other custom harvesters who drive New Holland combines. We stopped in Limon and rode over to Goodland together. I was finally able to meet Jon Yost of Yost Farm Supply in person. I’ve visited with him via Facebook but never met him in person. As you can see, these guys were enjoying each other’s company. 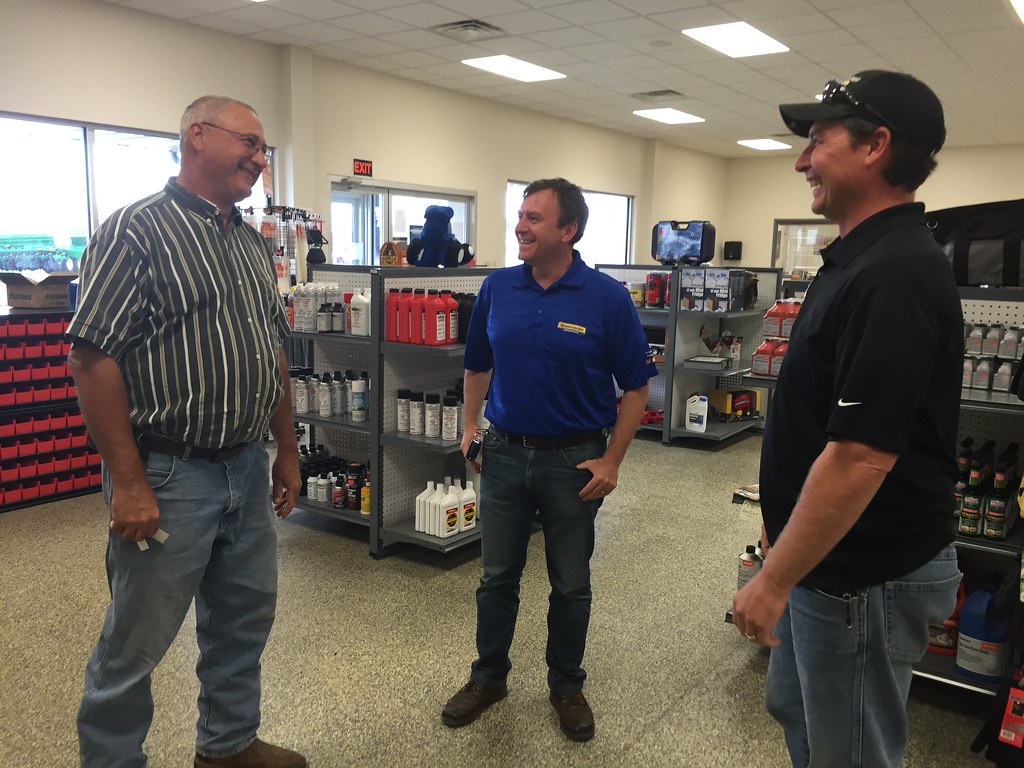 We got back from Goodland in plenty of time to replace the part and we’re now ready to roll as soon as the wheat is dry enough to cut again! Thanks for your help, Igor!  You listened to A LOT of stories and was a good sport through all of it! It was a good day – a productive day! I’m all about developing relationships and I feel another friend has been made! 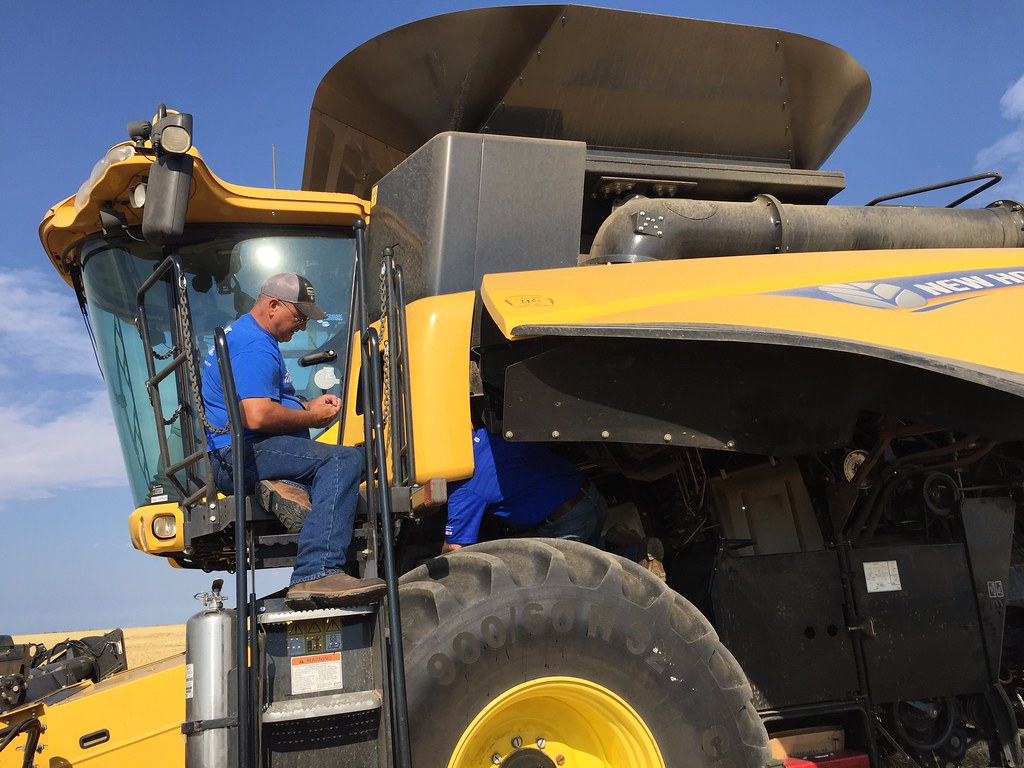 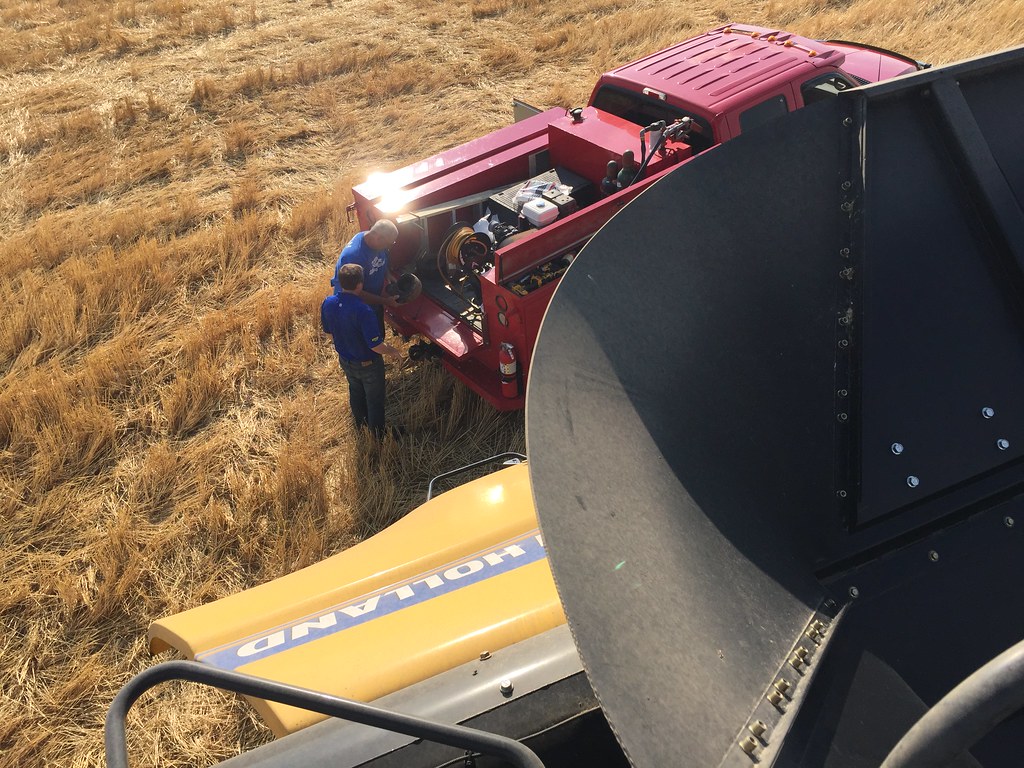 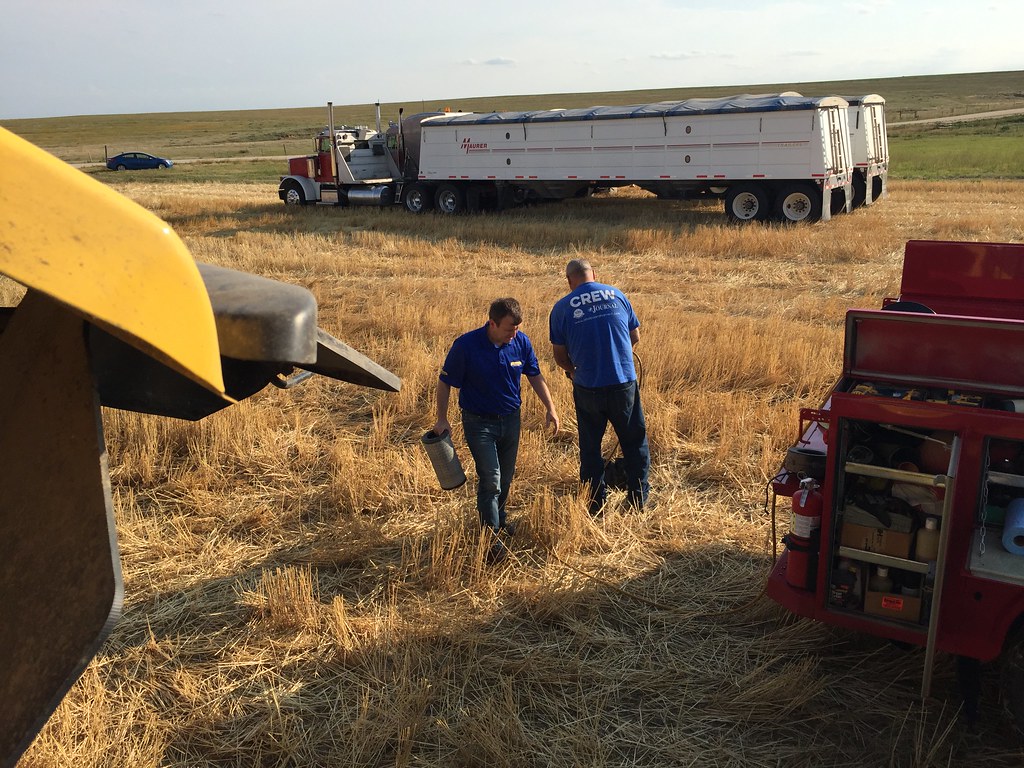 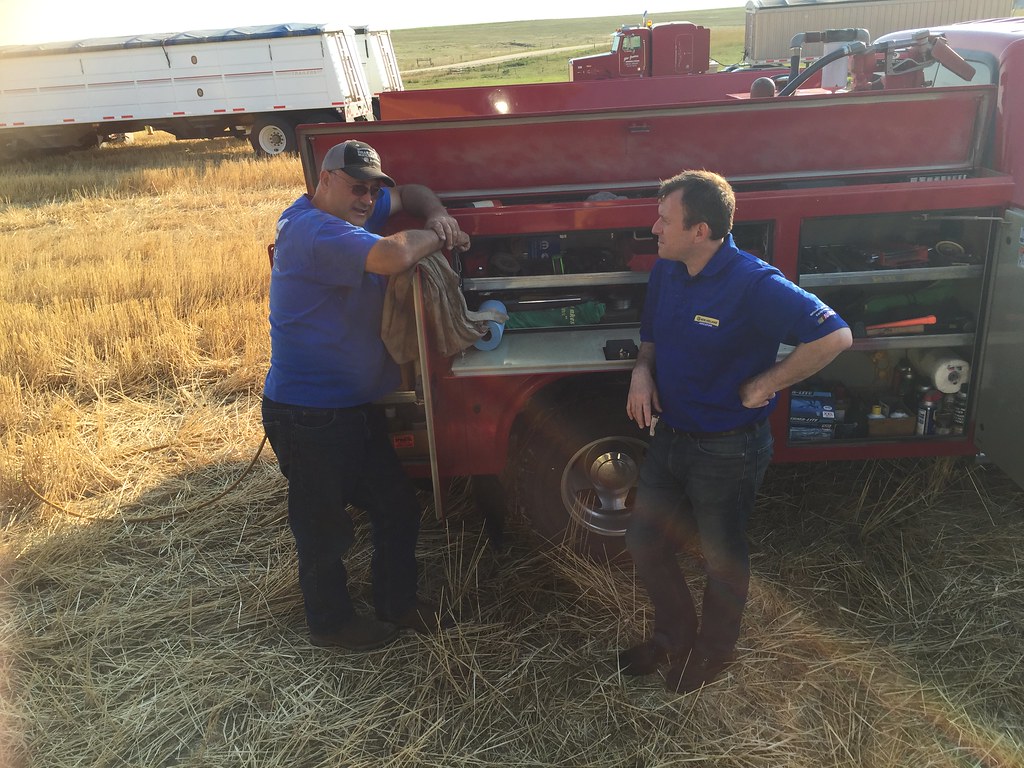