All Aboard Harvest | A New Place…A New Crop
13540
post-template-default,single,single-post,postid-13540,single-format-standard,qode-quick-links-1.0,ajax_fade,page_not_loaded,,qode-title-hidden,qode-theme-ver-11.2,qode-theme-bridge,wpb-js-composer js-comp-ver-5.4.7,vc_responsive 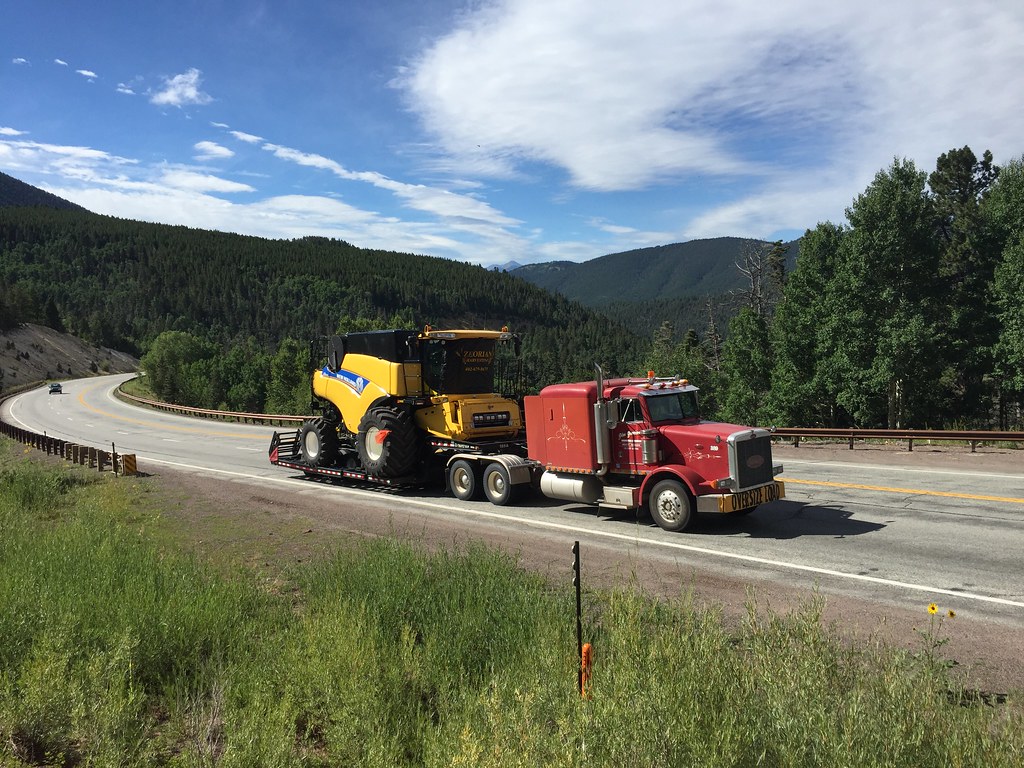 Monte Vista, Colorado –
We made the trip up and over the LaVeta Pass with the Beast last Thursday with no issues. Once we arrived at our destination, we unloaded the combine and knew we wouldn’t be back until after we got the pick-up header in Goodland, KS. We thought that would be the next day. However, once the call was made, we found out it wasn’t ready to get picked up and we wouldn’t be able to get it until Monday afternoon. So, our plans changed – as they sometimes do. I tried to convince Jim we should go home for the weekend but he sorta frowned on that idea. Jamie and Curt were going to be starting to move into their new home and Callie was moving into her dorm. I really did want to be there for both of those events. But, as most harvesters know…when there is work to be done, there are lots of things we miss at home. The sacrifices are part of the job. 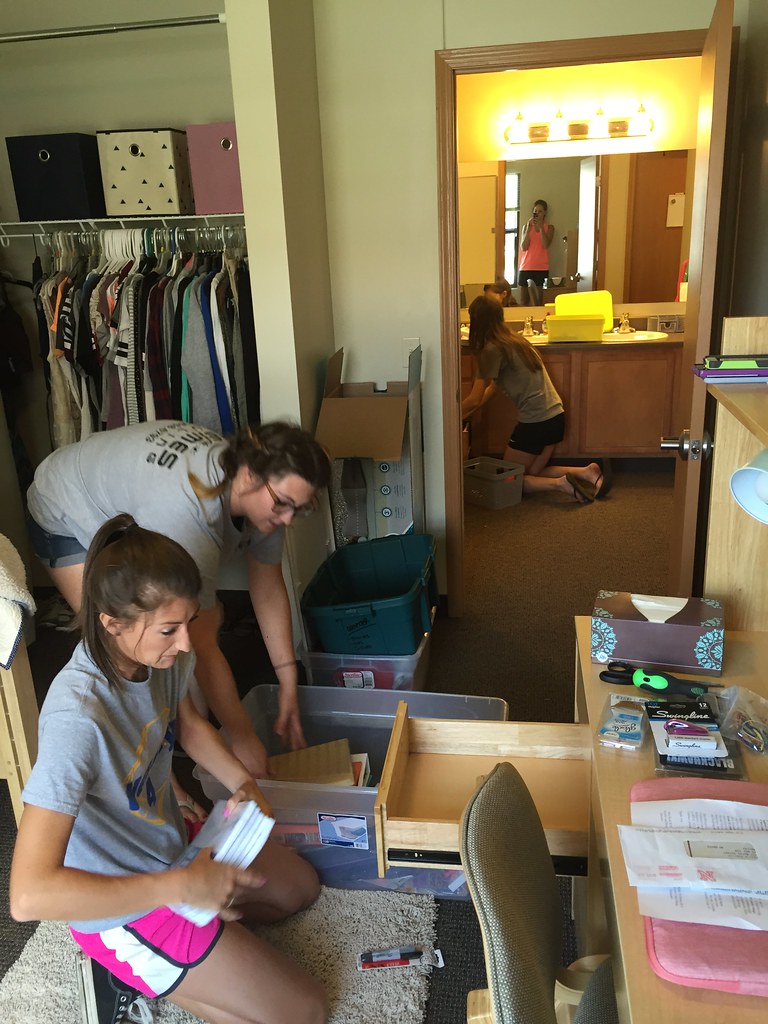 Callie was lucky to have her sisters to help her with the move. It looks like they had everything in its place in no time. I’m certainly anxious to get home and see her new “home!” And to see Jamie and Curt’s new home! 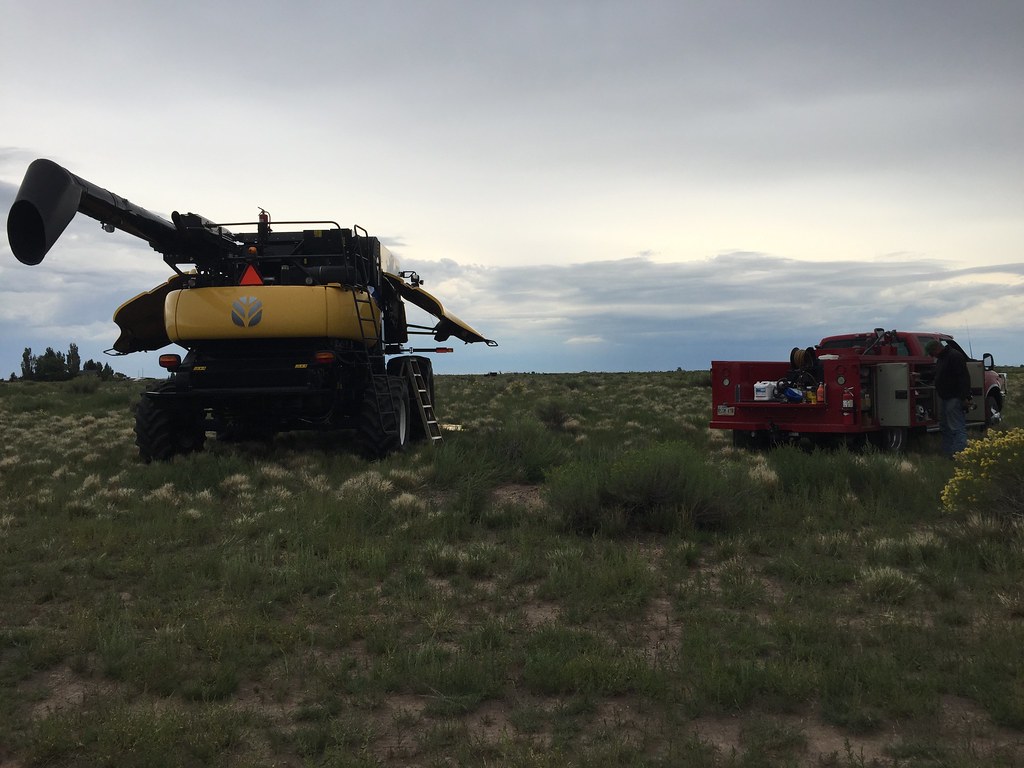 We made the trip to Goodland, KS on Monday – late morning. By the time we had the header loaded and were heading down the road again, it was mid afternoon. We had made the decision not to take the trailer house over the hill and would stay in a motel instead. This meant packing clothes, office supplies, groceries, toiletries, shoes, etc – basically everything we needed for the time we’d be away. I tell ya what…those of you who stay in a motel the entire harvest journey have earned my respect! It’s not so bad, except it’s not home. And making due with what you have is something I can do but it certainly isn’t as easy as having everything in its place in a “home.” Making lunches takes on a whole different feel in a motel! 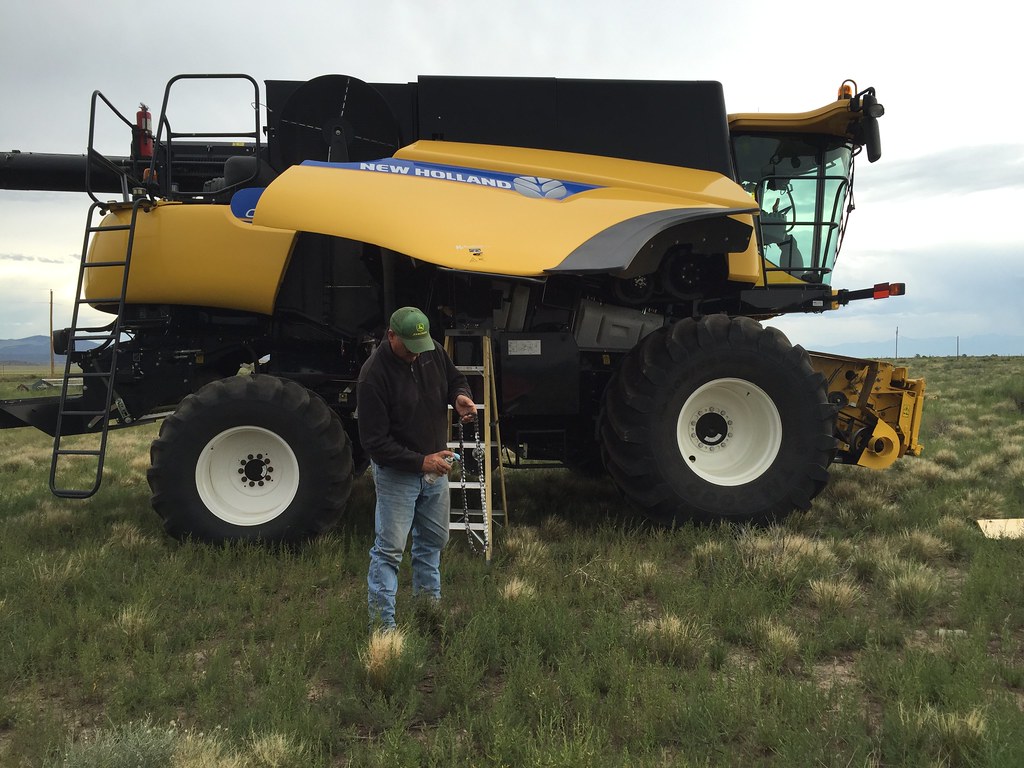 We were up early on Tuesday morning. Again, Jim wanted to get over the pass before the heat of the day. Both pickups were going to be hauling headers – the MacDon Flex Head and the MacDon Pick-up head. All our stuff was packed and we were ready to go by 8:00. The trip was pretty uneventful except for one issue. As we were starting to make our way up the pass, I heard a loud bang. It sounded like something hit the side of the pickup. I called Jim on the two-way and told him what I heard and thought maybe we should stop and check it out. After walking around the pickup and header trailer, we couldn’t see anything that looked out of place so we started up the hill again. I heard it again – only louder this time. So, Jim decided he’d drive the service truck and see if it did it again. When we reached our destination, I asked him if it ever made that noise again. He shook his head, “no.” Then said, “Why do you always want to try to give me a heart attack?” I asked him what he meant because I would never do something like that on purpose. He said, “look in the backseat of the pickup – there you will find the noise you heard”. I looked. All I saw were the few boxes of items that we packed and a bag which held several bags of potato chips. That’s when I realized the loud noises I heard were actually the bags of chips popping open due to the change in elevation. It seriously sounded like a tire blew or a gun shot. A bag of potato chips…

We unloaded our living necessities in the motel and took off for the combine. We had some servicing that needed to be done before we could get back in the field again. We took the rest of the day to do that and to also put a new tarp on Frank. The old one was 16 years old and began showing wear this summer. Thanks to Steve Molstad and Colby Canvas, we now have a brand new tarp. Colby Canvas also created our window covering a couple of years ago. Steve and his gang do a great job and I would highly recommend Colby Canvas! They know and understand the needs of the harvester. 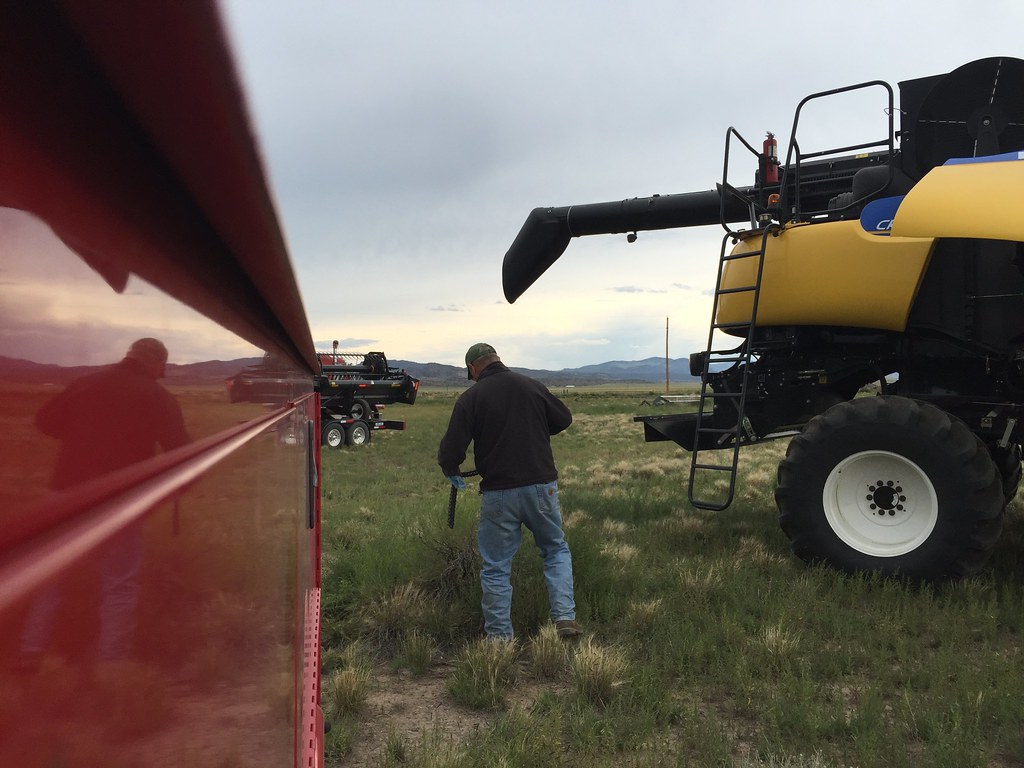 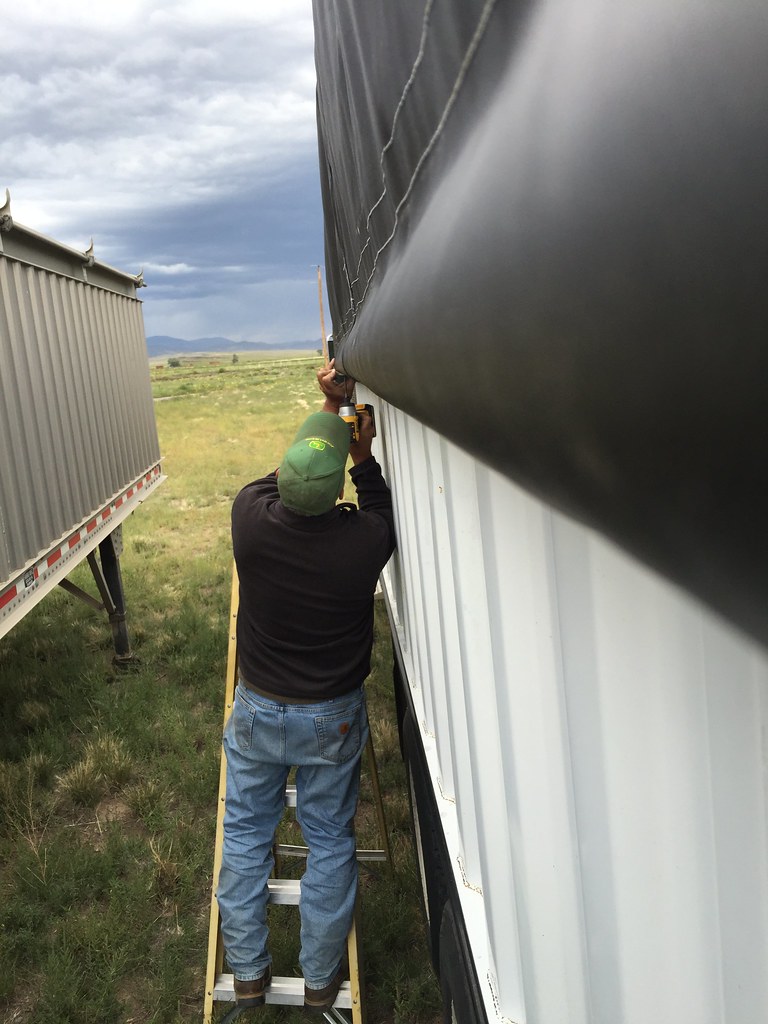 While putting the new tarp on Frank, the wind decided to come up – quite strong, I might add. So, while Jim was attempting to attach the tarp to the metal frame, I was attempting to hold the tarp in place so it wouldn’t blow off the truck. That was a funny sight, I’m sure! 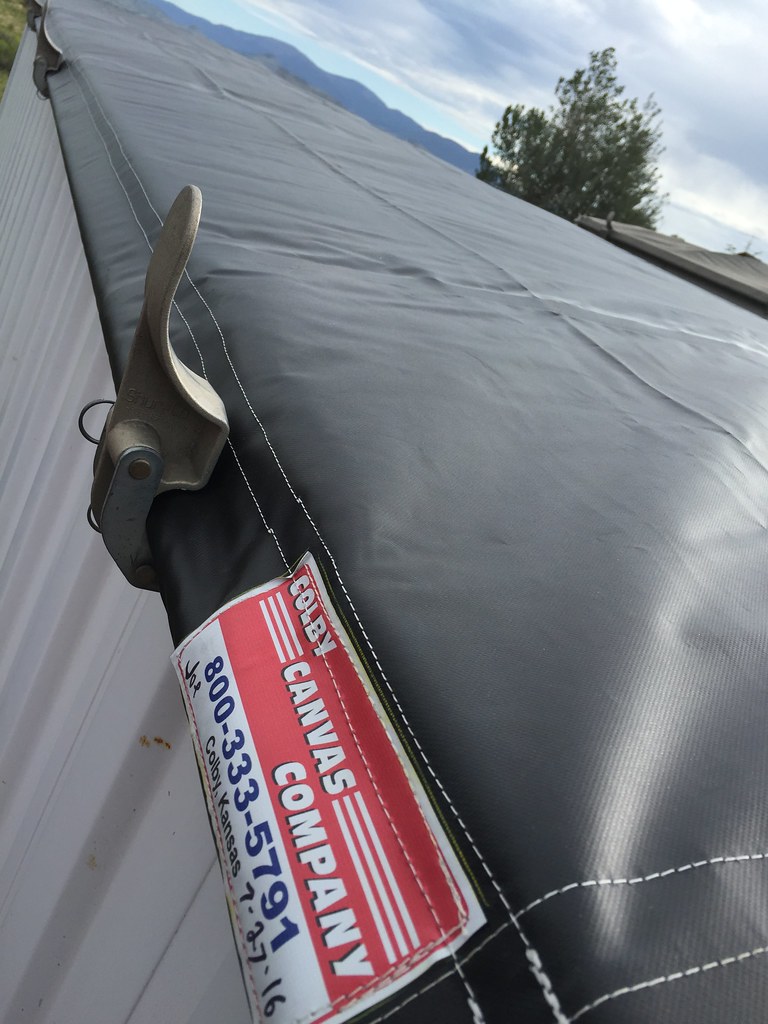 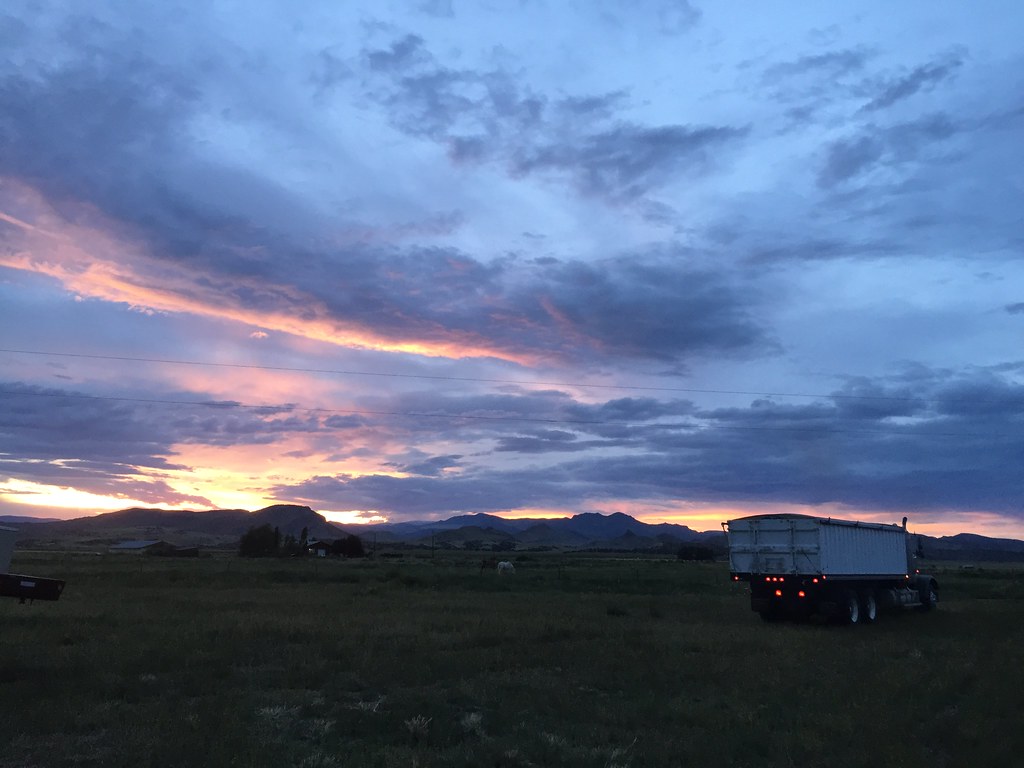 Pretty certain the sunset pictures are going to be way more than necessary! 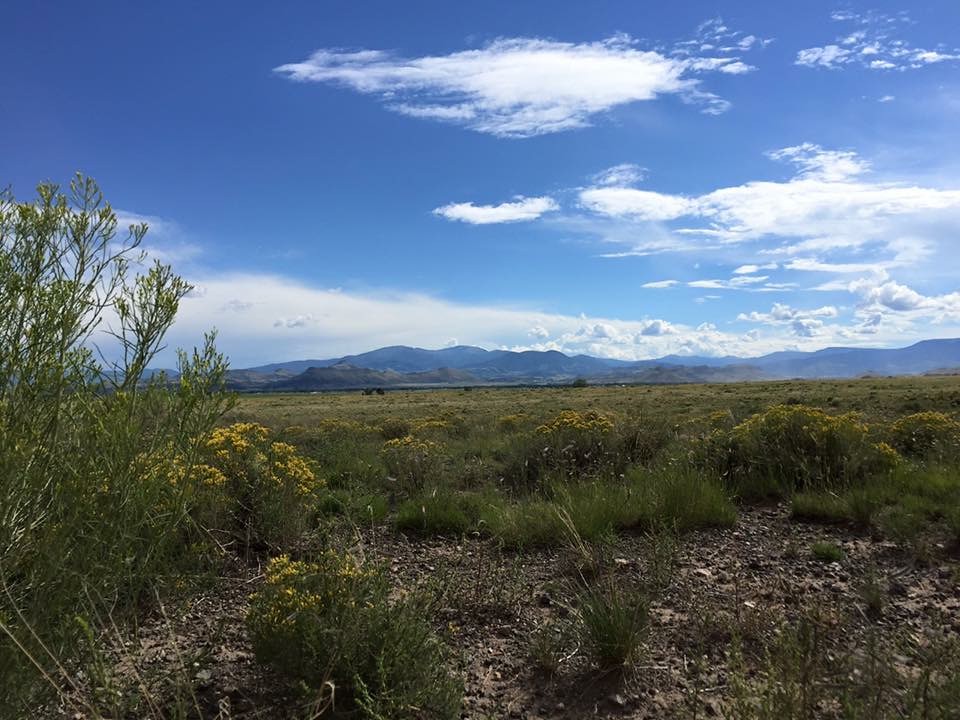 The San Luis Valley is a high-altitude desert with an annual rainfall of 7″. Everything that is grown here is kept alive with water coming from a pivot (and there are a lot of pivots here). This area will rarely, if ever, see a 1″-2″ rain like we experience in the lower elevations. The Valley is surrounded by mountains and is absolutely gorgeous. So far, I’ve seen potatoes, barley, lettuce, canola and hemp being grown here. We haven’t been able to really explore but I’m hoping before we have to leave, I can see more of the valley’s agriculture. 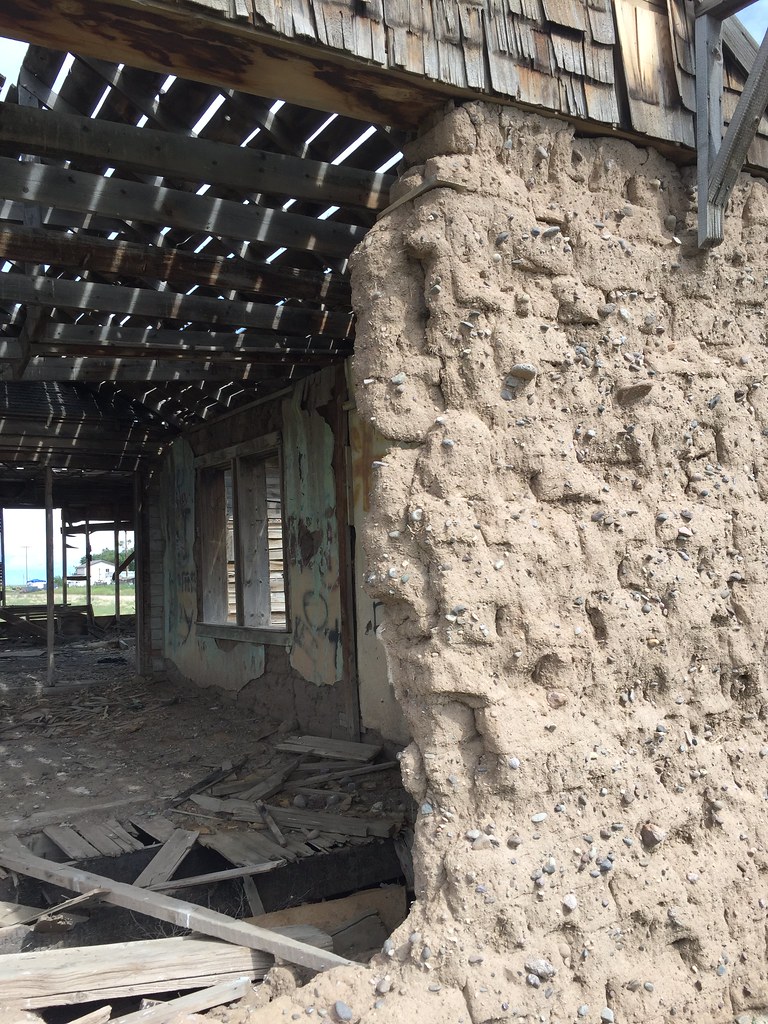 We were ready to begin cutting on Wednesday afternoon. We moved the combine and trucks to the field we were to start in and cut about 100 yards. The sample was taken to the elevator and the result was too wet. The sample was 18.2% and it needs to be 12-13% like wheat. So, we moved our equipment down the road about 15 miles and made the initial cut into the field to take a sample. The farmer took off with it and would call us with the results. In the meantime, the rain began to get closer and closer. Just as the farmer called to let us know the moisture test was 11%, it began raining. So, we called it a day as it was after 6:00 p.m. when it started to rain. 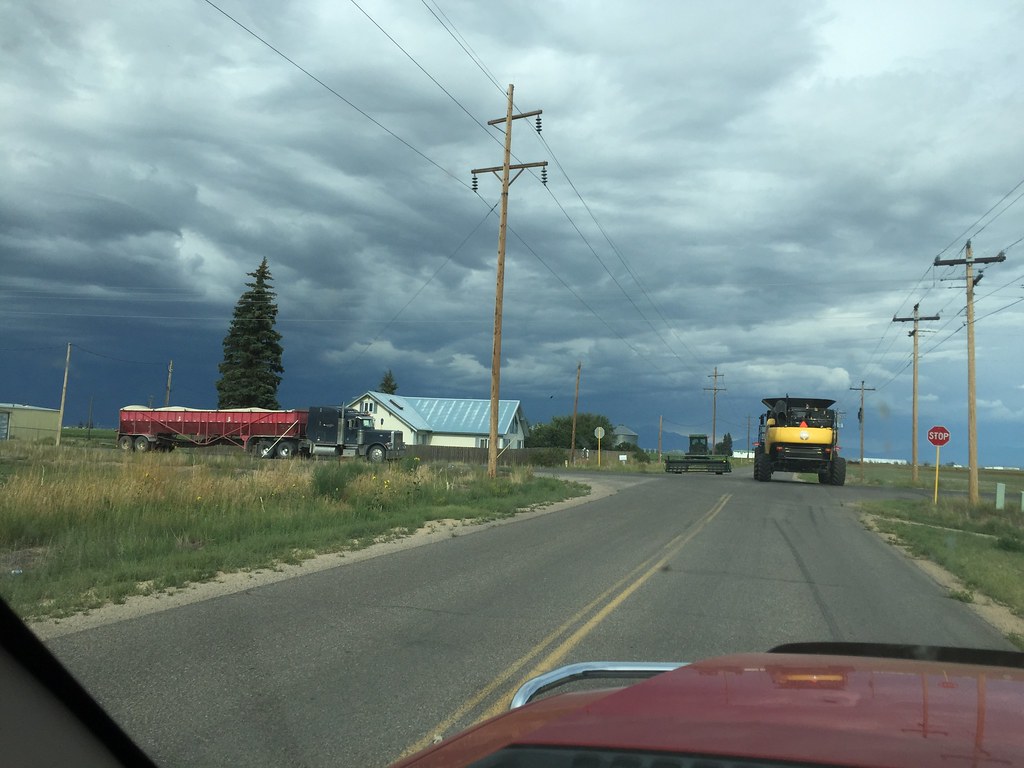 Moving to field #2. I took this picture because it just has agriculture written all over it! The truck was hauling barley, the swather would be used to swath barley and then there’s the combine. I was stopped while I took the picture. The truck was turning right and I wanted to make sure he had plenty of room to make his turn. 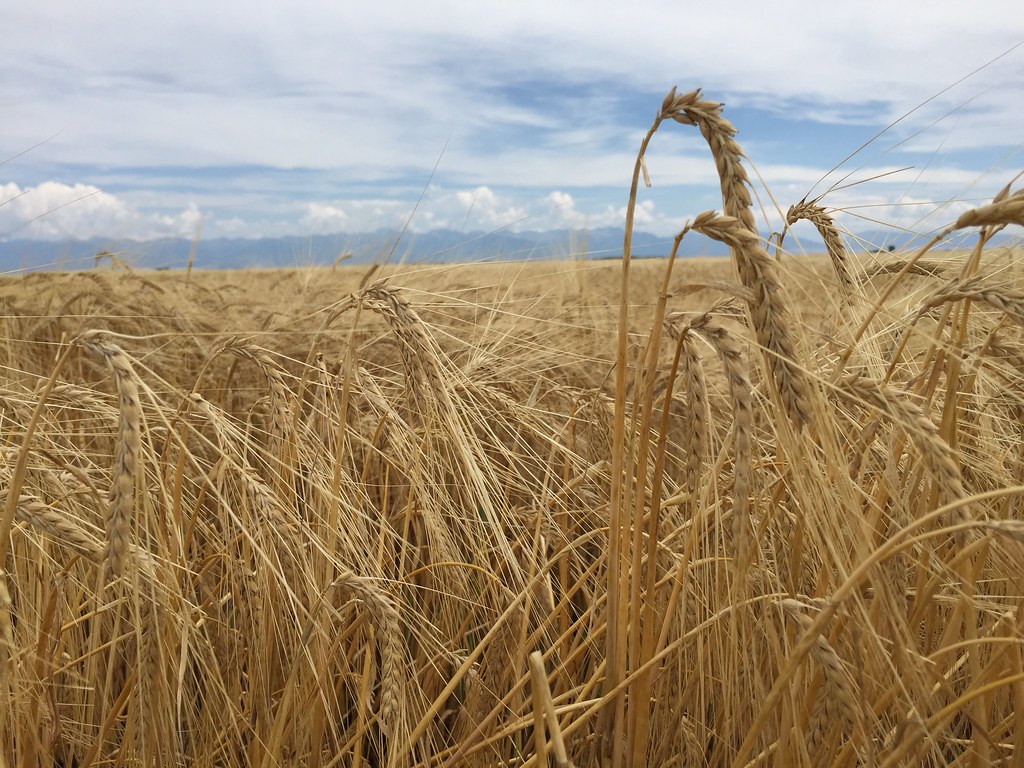 Barley looks a lot like wheat only the heads are much longer. I should have taken a picture of the grain in my hands – I’ll do that another time to show the difference between the two grains. Most barley is swathed and laying on the ground by now. Because of the weather, some of the farmers have opted to leave it stand and use the same header used for wheat. When it’s laying on the ground, we will use the pick-up header. The majority of the barley grown in this area will be used by Coors for beer.

We were able to get started yesterday. It’s a very slow process – not anything like the craziness of wheat harvest! We didn’t get a very early start this morning because of the rain the night before and I was only able to get 50 acres cut today before we had to shut down for the night. I lacked 10 acres of getting our first half circle done. The reason for the slow going is because the straw is still green (very green in places) and it’s yielding so well. The monitor shows an average of 150 – with a patch or two that makes the monitor move in the 300’s.  Oh well. It’s a new place, a new crop and there’s a whole lot of learning to do!

Jim took this video. It isn’t a very clear video but gives you a fairly good idea of the area around the grain bins that he’s been hauling to. 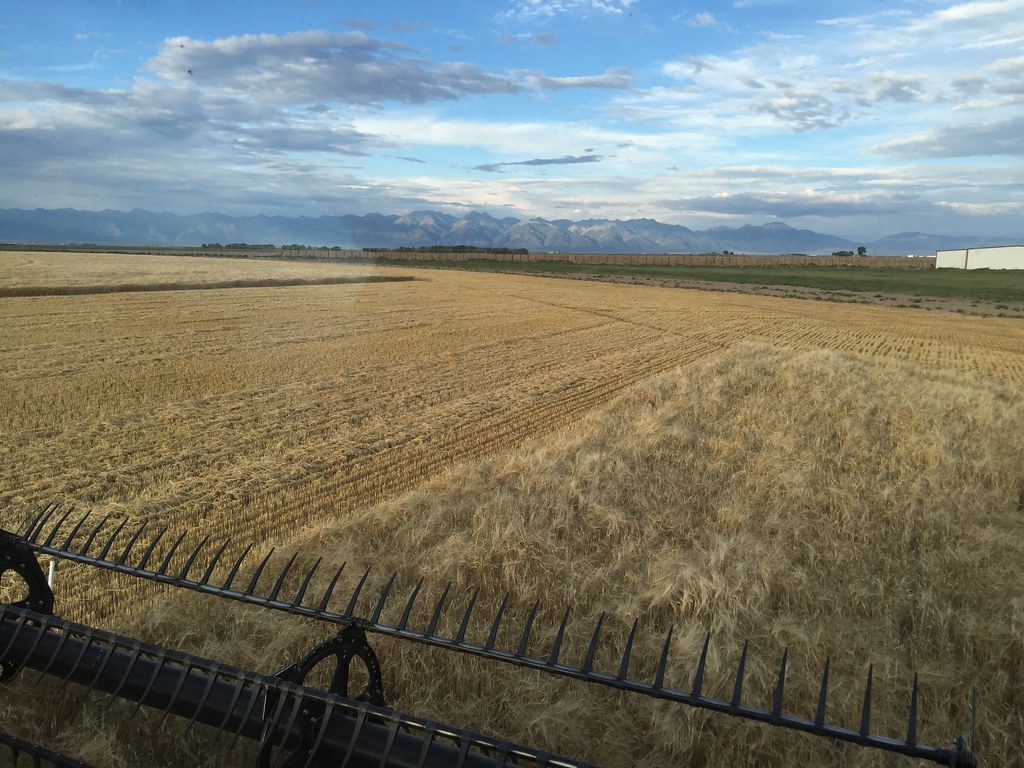