All Aboard Harvest | Tracy: Joining the party
14436
post-template-default,single,single-post,postid-14436,single-format-standard,qode-quick-links-1.0,ajax_fade,page_not_loaded,,qode-title-hidden,qode-theme-ver-11.2,qode-theme-bridge,wpb-js-composer js-comp-ver-5.4.7,vc_responsive

Claude, Texas – After all the pre-harvest preparations, details taken care of and tears shed, we can finally say we joined the #harvest17 party today (6/10).

We woke up to a heavy fog again this morning and very cool temps. But, the weatherman had been warning us of the impending heat and wind. It had been decided the night before we would get up early and move our equipment to a 400-acre field west of our current headquarters. By the time we made the move and had everything situated, we hoped the field would be ready to sample.

It’s so easy to get excited about getting started, especially when it’s new for the season. The anticipation of getting the combine in the field and actually keeping it there was high this morning. We were hopeful! As I watched Jim make that first initial cut in the field – just large enough to bring the two trucks in – I really didn’t want to get too excited for fear of being let down again. When he stopped the combine to move the trucks, I asked, “Well, do you think it’s going to go?” His answer was, “I think so. Why don’t you take the service truck and header trailer around the section and park it in the field. Bring it far enough in that it’s away from the weeds in the ditch. I don’t want to have to think about rattlesnakes and maybe if it’s further away from the weeds and the prairie, we won’t see one.” Good idea.

So, I made my way down the road, turned around, and when I got back to the field, the Beast was still in action…Woo Hoo!!!! 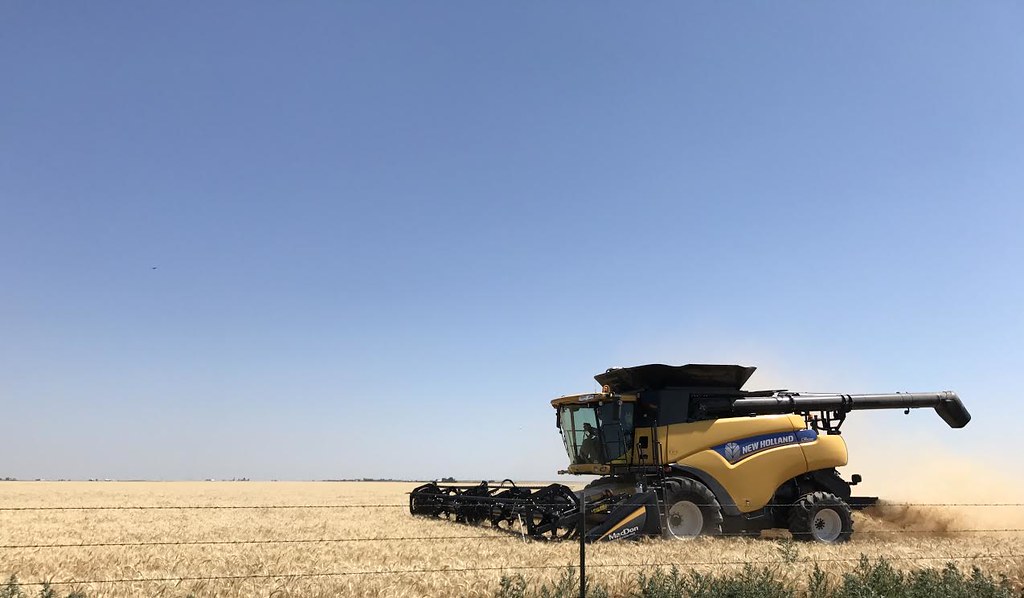 The Beast is making dust!

I wish I could explain to those of you who have never experienced wheat harvest why it does what it does to my soul.

It’s always exciting to see everything working again after months of being away from it. 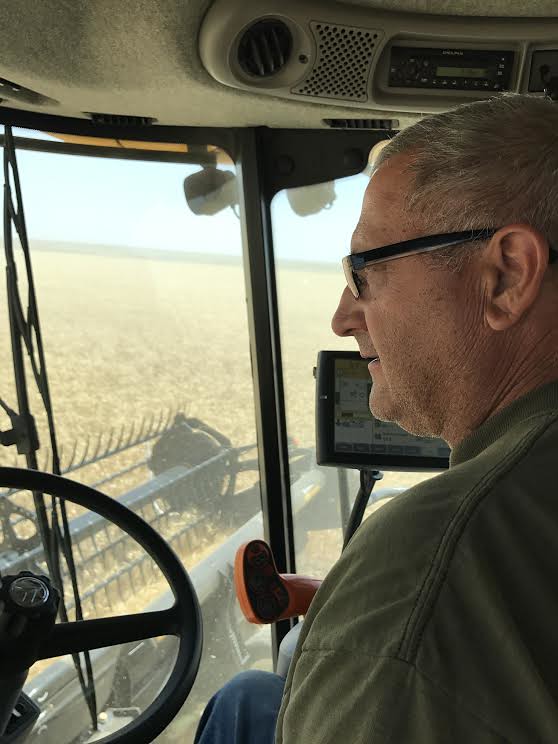 Jim wanted to fill the Pete to make sure everything was working as it should before he turned it over to me. 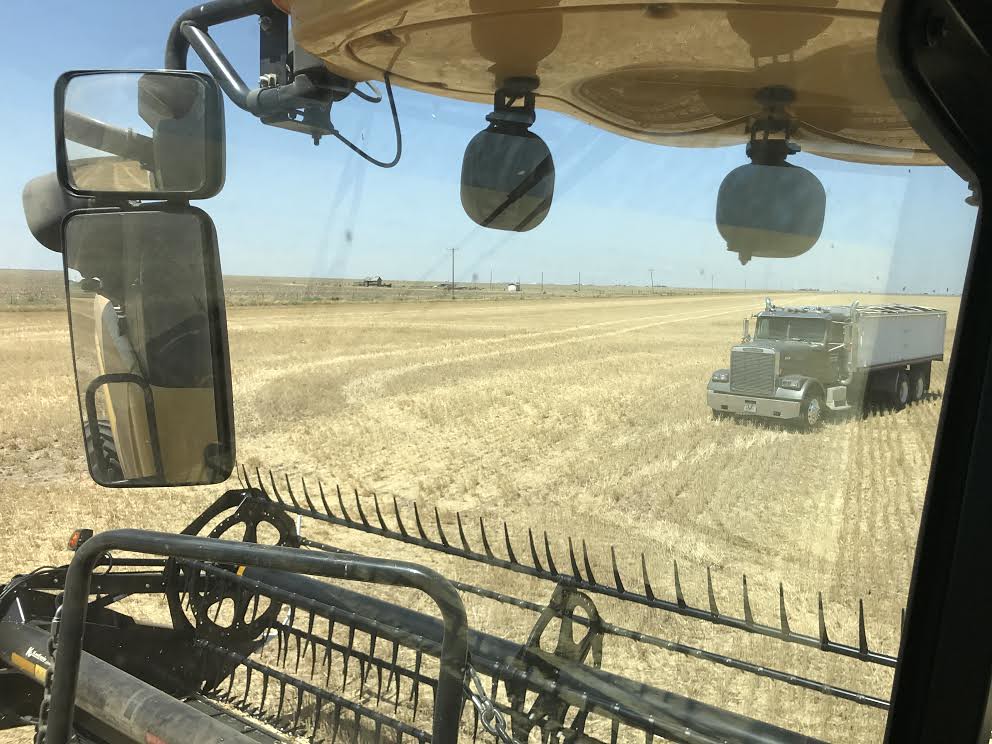 I remained in the buddy seat until the Pete was full. Then it was my turn. As soon as I sat behind the steering wheel, I was instantly filled with anxiety. Good grief… how many hours have I sat in this seat and I was worried about not remembering everything? As soon as I clicked that first button, it all came back. 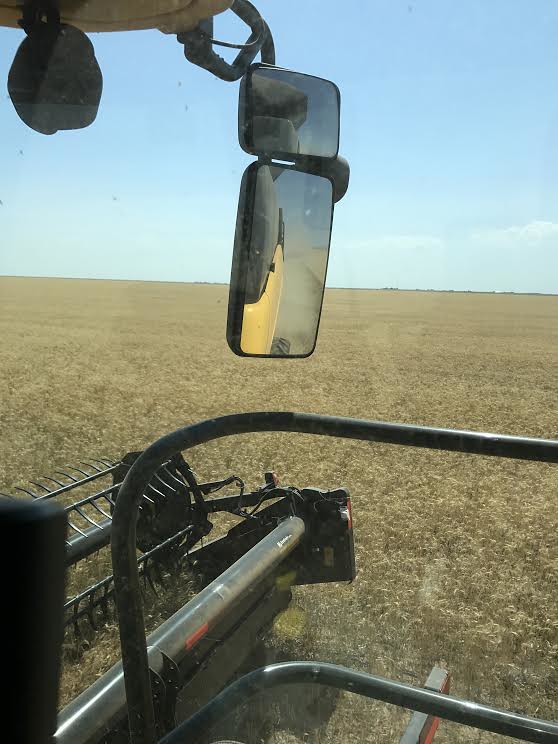 We put in a good first day! Considering the field is about as flat as flat can be and I didn’t make many turns, I was able to cut 170 acres. Poor Jim, though, he was literally driving trucks all day. There was no break for the truck driver! According to the yield monitor, this field is making 35 bushels per acre – better than expected. Our farmer said it was terribly dry over the winter, and the wheat nearly died (remember… wheat has to die at least 7 times before it’s harvested). But, then it rained in January (which he said never happens) and that saved the crop. According to Jim, the test weight has been staying at 62 pounds.

Tomorrow is Sunday so the elevator is closed until noon, so we won’t have near the day tomorrow as we had today. With a little luck, though, we’ll finish this field on Monday and head to the next one. The weatherman says continued hot and windy for the next several days. I’m going to guess we probably won’t have to worry much about the moisture anymore. 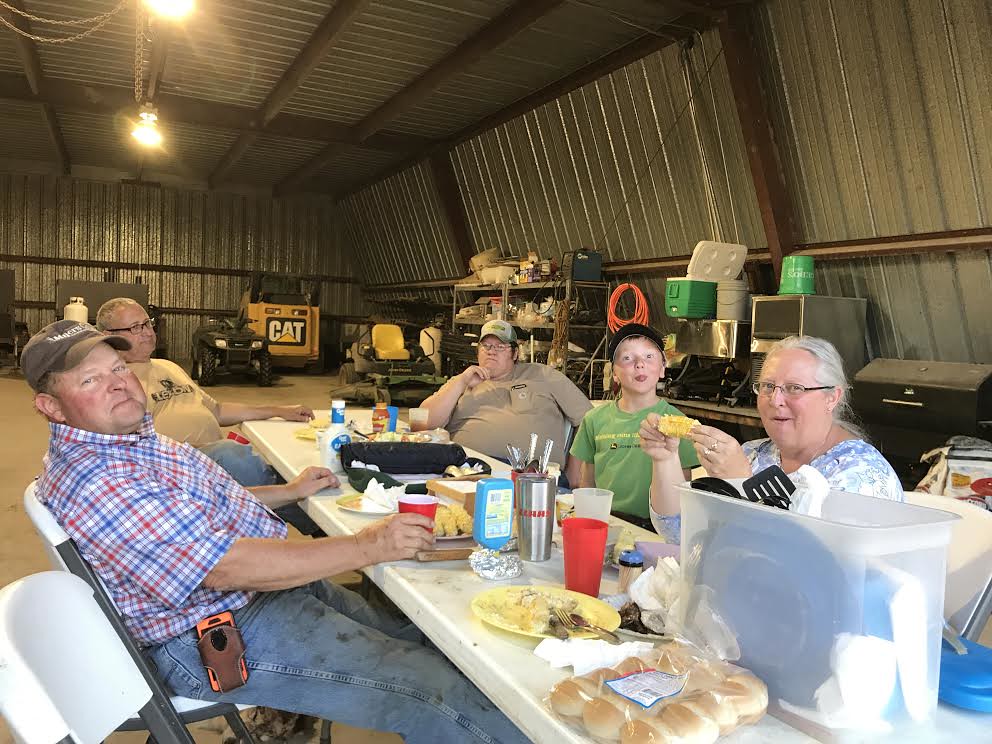 Our farmer, Bryan, and the Misener Family Harvesters.

On Friday afternoon, I got a text from Dan and Kristy Misener (Misener Family Harvesters) wanting to know if we’d like some company. I was in dire need of some familiar faces, and it was awfully good to see them at our door. I didn’t know Leslie was going to be making the trip with them – that was a fun surprise! We had a meal fit for a king before they headed back to Elk City that night.