All Aboard Harvest | Tracy: Full speed ahead!
14524
post-template-default,single,single-post,postid-14524,single-format-standard,qode-quick-links-1.0,ajax_fade,page_not_loaded,,qode-title-hidden,qode-theme-ver-11.2,qode-theme-bridge,wpb-js-composer js-comp-ver-5.4.7,vc_responsive

Claude, Texas – Good grief! We go from not sure what to do next to full speed ahead! We just completed our sixth consecutive day of being in the field (06/15).

Last night, I had a few things to catch up on – one being bills that needed to be paid. I had to look at my phone to see what the date was. My brain did this weird little thing when I saw it was the 14th. I felt like I had completely lost a day (or two). It was the strangest feeling. You see, when we’re out here doing what we do, it’s just day after day after day. No reason to really know what the date is until you have to step back in the “normal” world once in a while… like to pay bills.
It seems the clock gets forgotten about too, until it’s time to get up or when I look at just how late it is before I finally decide to call it a day and take my shower. This past week, I’ve seen the clock showing 1:00 a.m. (or later) just about every night. There’s always something that needs to be done once we get back to the trailer house at night. And laundry? Well, that’s lucky to get thought about until we start running out of clothes. This morning, I had to throw in a load of shorts, or I would have had to start wearing dirty ones to the field again. I think I might have it figured out. I’m going to throw one load in just as soon as I get up in the morning. Then, just before heading out, I can hang them on the clothesline to dry (and hope the humidity doesn’t have them damp again when we get in at 11:00).

We’ve been basically living off whatever I can cram into our lunchbox, and they’re not that big. Sandwiches…lots and lots of sandwiches have been consumed over the past six days. And, it will be more sandwiches until either a) we finish or b) it rains. However, we moved to a couple of fields that are very close to Claude (right outside of the city limits), and I had the opportunity one morning to run to the grocery store and to Dairy Queen before Jim filled the Pete. Getting more lunchmeat, peanut butter, chips and bread was a must! The 5 dollar lunch from DQ tasted pretty darn good!

It seems the storm clouds have been popping up almost nightly. We’ve been very fortunate, though. I was showered on in the field one evening just enough to make the combine a mess. I had to run the wiper blade to move the dirty grime over a little so I could see the wheat in front of me.

The wheat has been all over the place for yields. Anything from 25 to 50 bushels and the test weights have been 57 to 62 pounds. There are no more worries over high moisture. As a matter of fact, the straw is so dry, it becomes powder as it makes its way through the belly of the beast and out the back. When you walk on it, it pops and breaks immediately… there’s no flexibility in it at all. The highs have been near 100 degrees nearly every day with more heat on the way for the weekend. We should have perfect wheat cutting temperatures! They will be just a little tough on the truck driver.

We had visitors to the field late yesterday afternoon. Roger Peters was a custom harvester, and we’ve been reacquainted through Facebook. He lives in Nebraska but not real close to us. He sent me a note and asked if he could come ride a round or two with me. I told him, “Sure!” And the next thing I knew, he and his wife, Kay, were heading for Texas. They had a window of three days. When he crawled into the cab, he said, “I didn’t realize just how far it was down here.” Then he proceeded to tell me about the old days of harvest.

His dad began custom harvesting in 1939 with a pull-type combine. He said he loaded that thing and went to Selby, South Dakota. Now I have to wonder… what did he load it on? Roger’s dad and my grandpa were friends. I can remember when I was a kid, I’d go to the cafe in Cherokee, Oklahoma with grandpa and get to sit with the table of harvesters. It is always the Peters and Nash crews that stick out in my memory. And, to make things a little more interesting, our first service truck (a 1975 Ford pickup) had belonged to Peters Harvesting. That pickup still remains a beloved part of our family! If you happened to be watching the Combine Cam last night, you would have been filled with old time harvest memories!

I’m going to leave you with a couple of videos and pictures taken over the past six days. I have to see if the truck driver would take a few more action photos for me. It’s a bit difficult to do when you’re sitting in the cab of the combine!

One morning, while doing the before-you-get-started chores, Jim was telling me about this wonderful new tool he bought himself and just how much he loved it! I told him he should share this with the rest of the harvesting world: 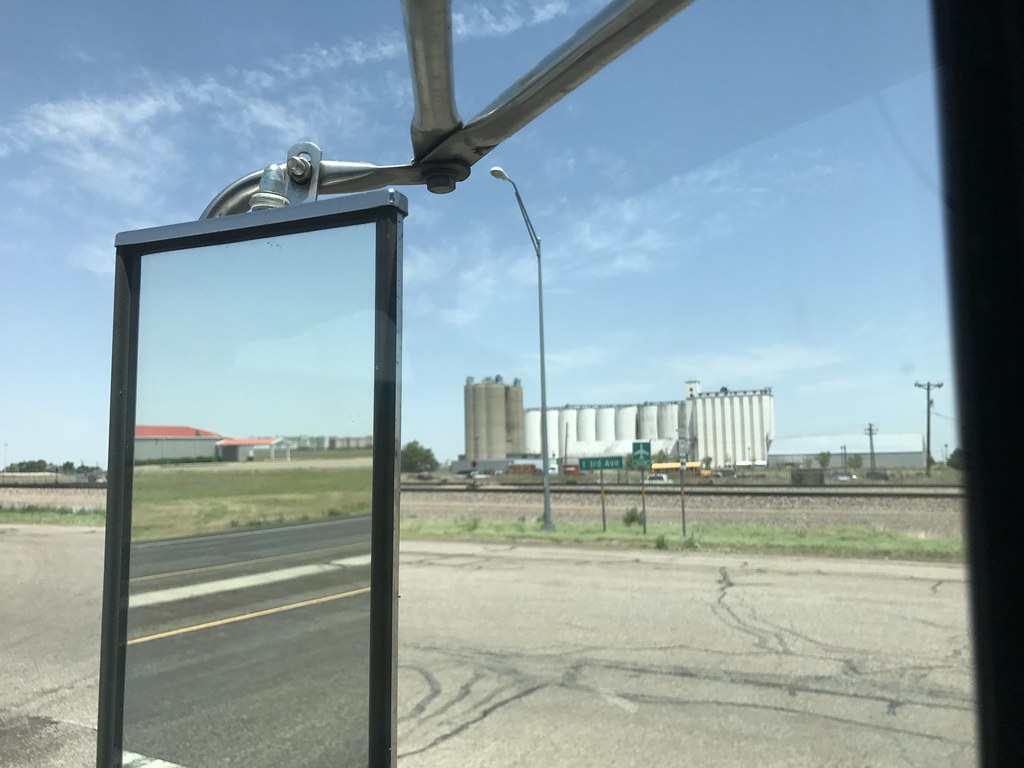 This was a load I took to the elevator on the outskirts of Amarillo. The traffic is TERRIBLE, and I was a nervous wreck by the time we made it here! This was the last load Frank took before going on a hiatus. Unfortunately, Frank’s age is beginning to show (a clutch issue that needed repaired). 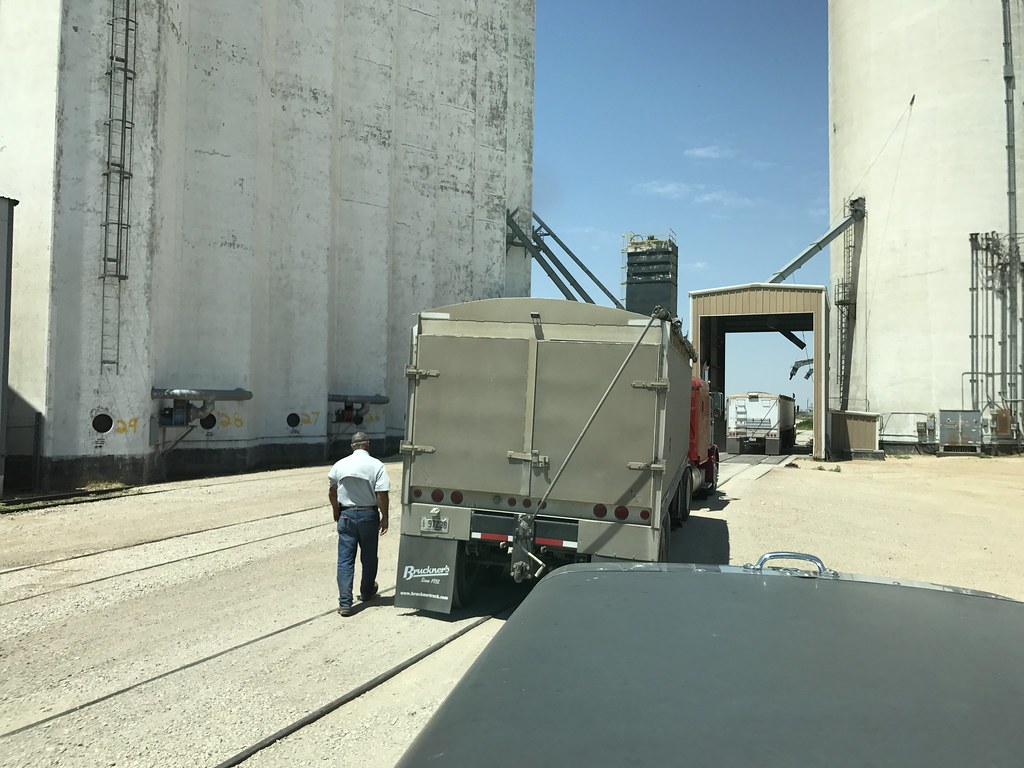 Elevator on the edge of Amarillo. 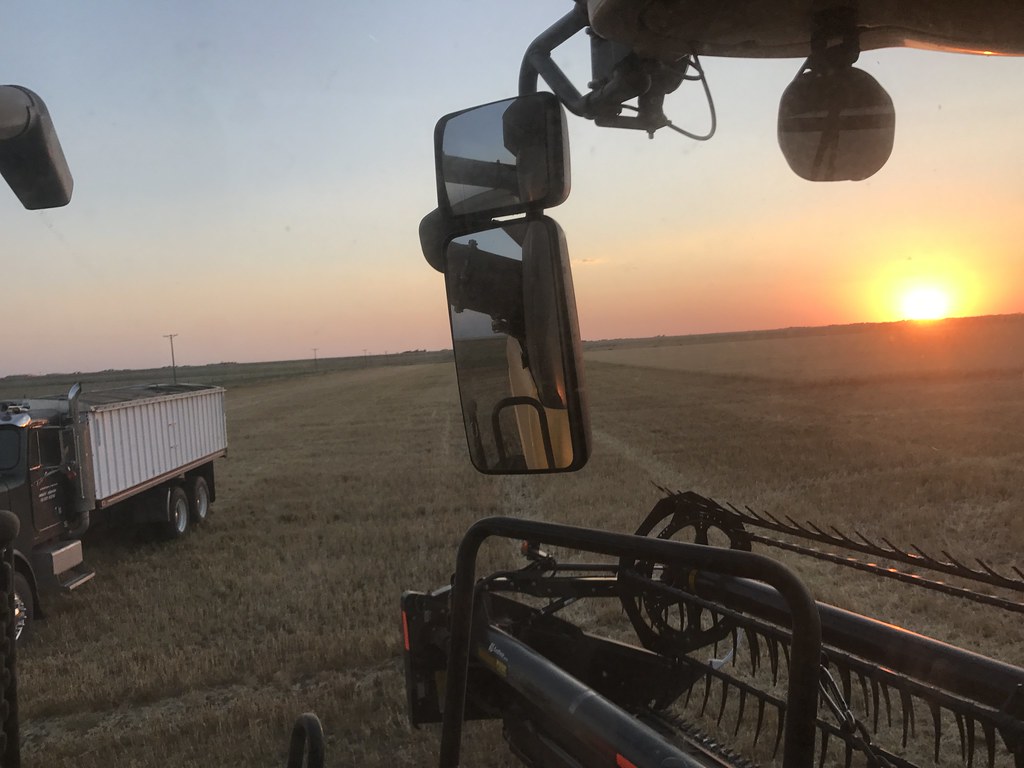 One of the many sunset pictures I seem to take. 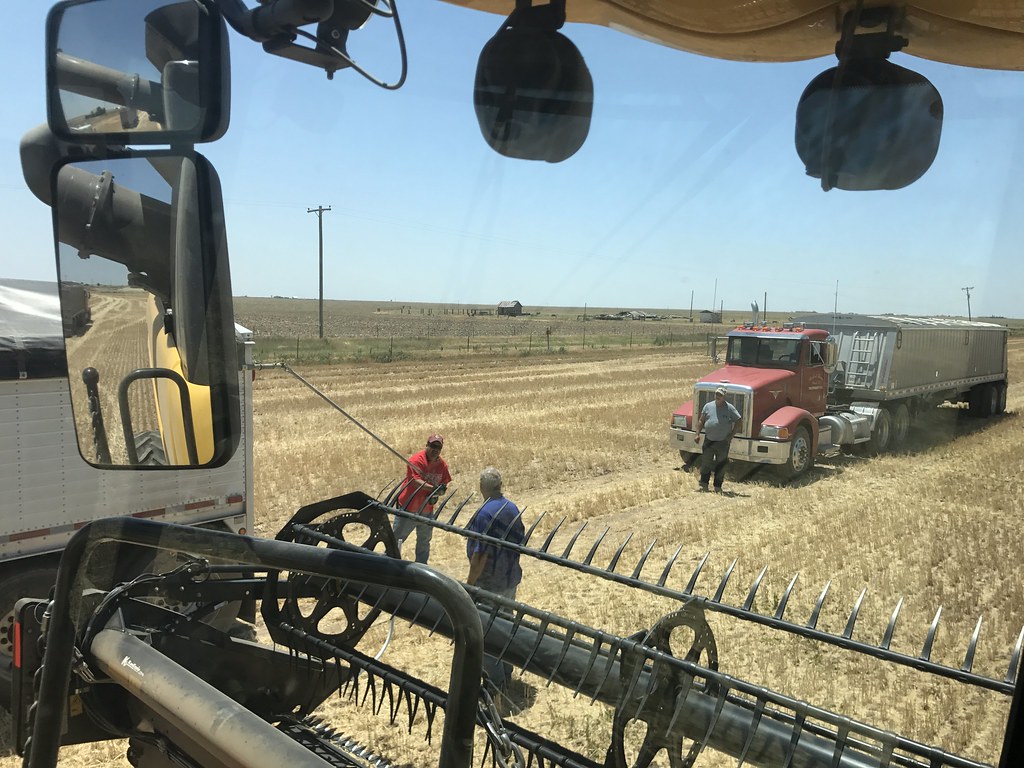 After Frank left us, we had a couple of trucks fill the void to keep the combine rolling. 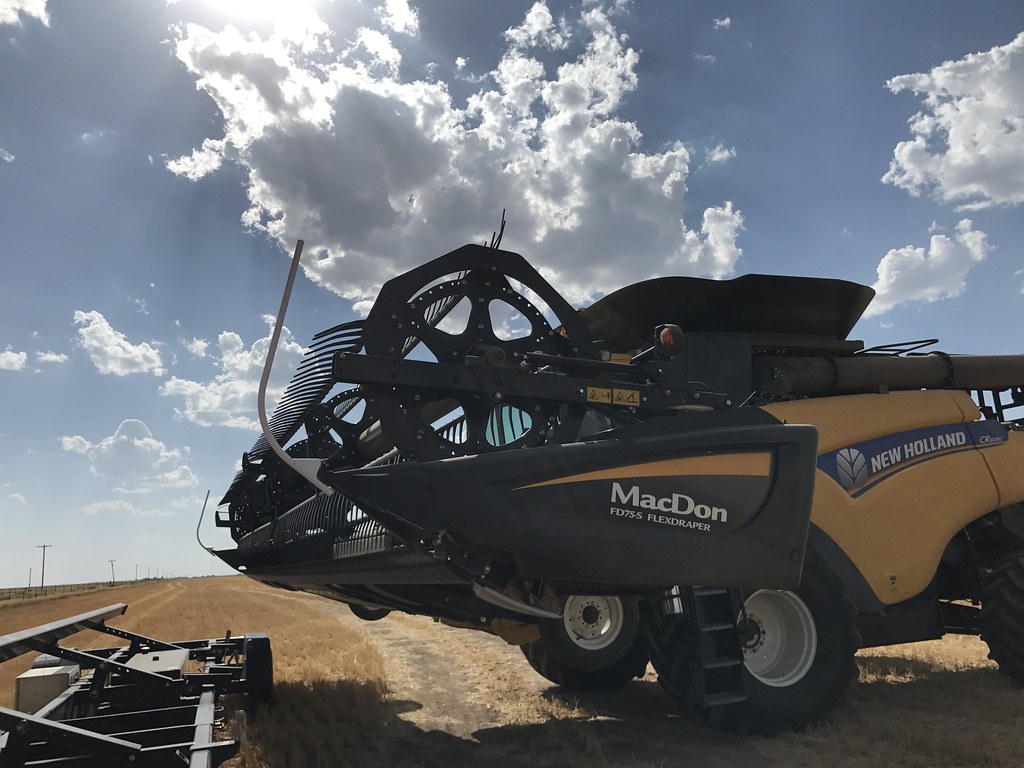 Loading the header on the trailer to move to another field. 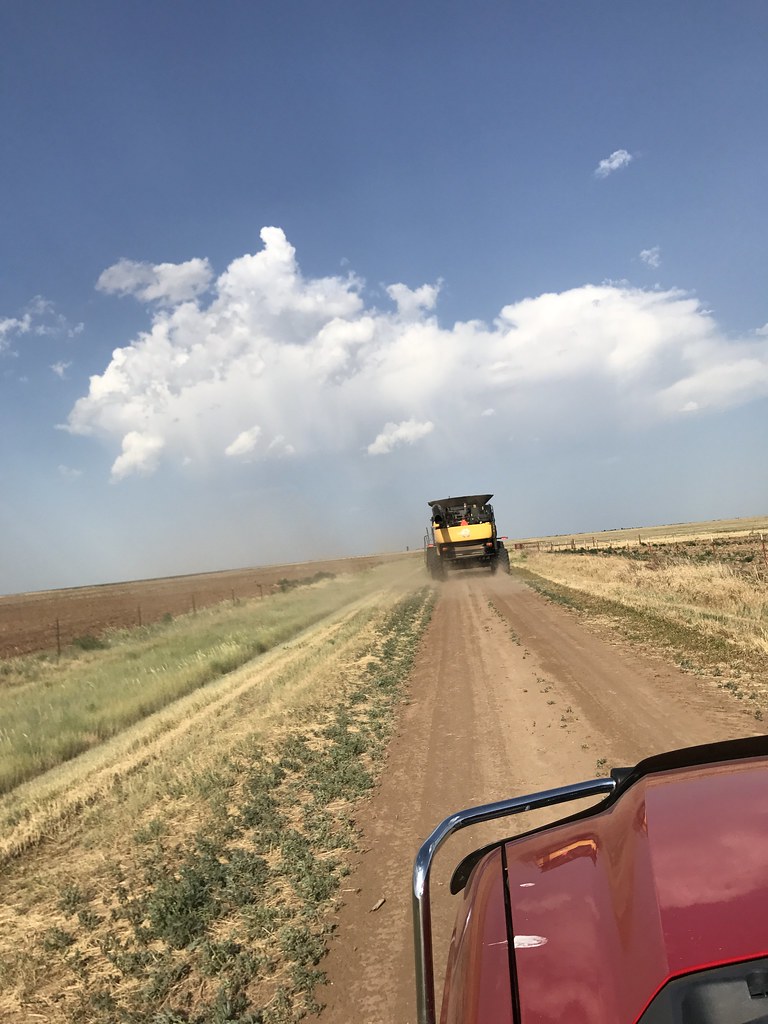 When you clash two of my most favorite things together, this is what you get: 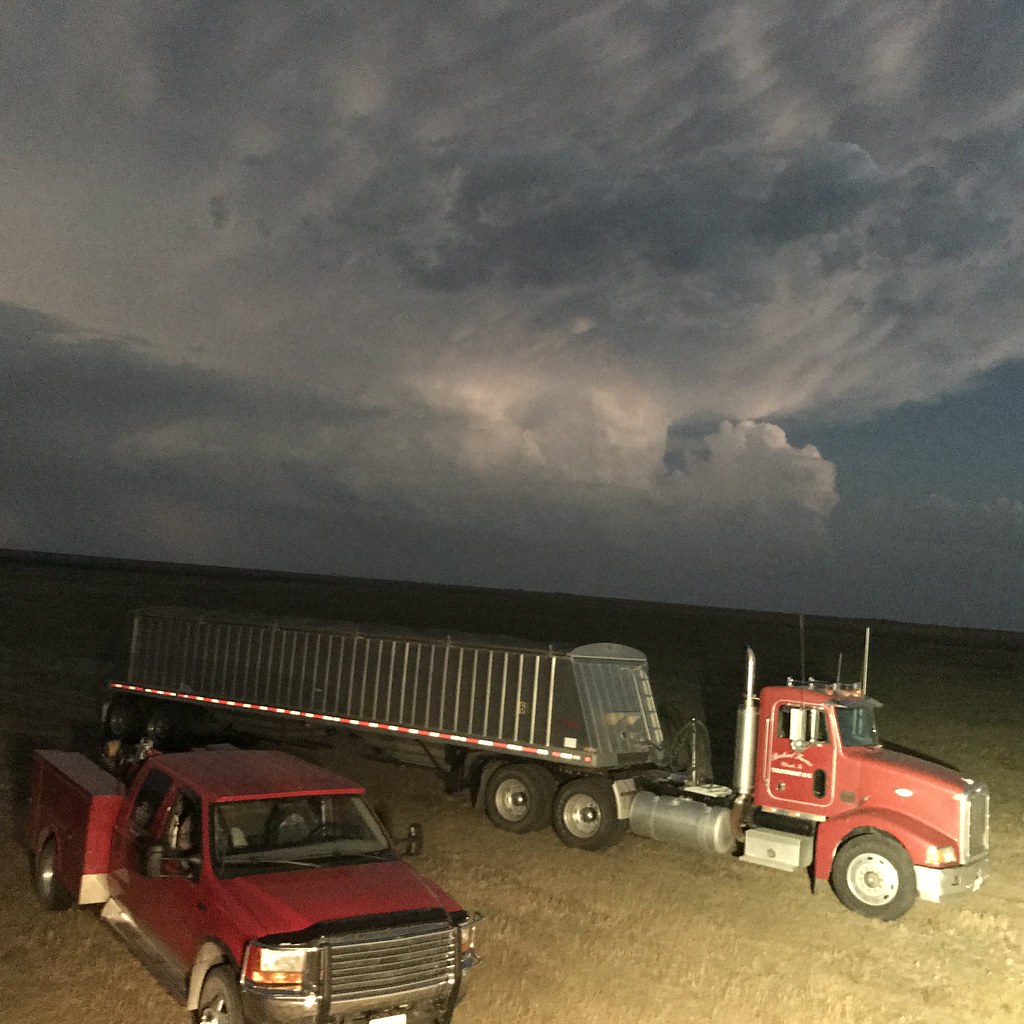 The storm was rolling in! I was hoping for one of the many lightning strikes to magically appear as I was snapping this photo. It was sort of like “a watched pot never boils.” 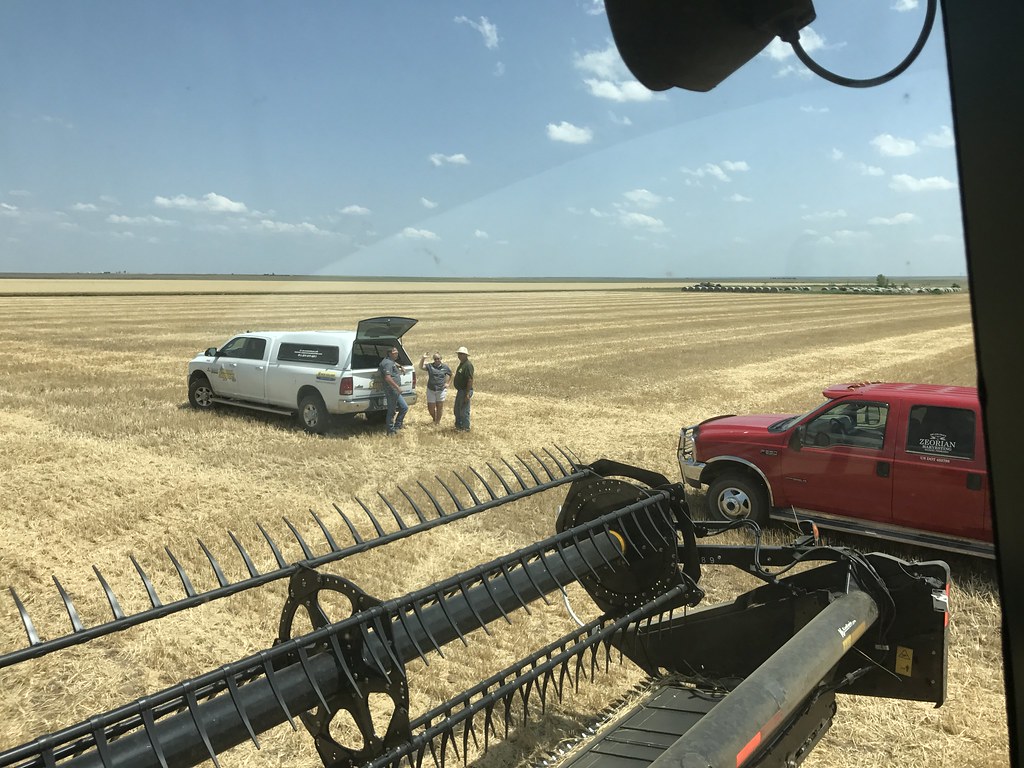 New Holland Harvest Support (a.k.a. Monte and Carolyn Ahrens) made a trip to the field to deliver a part we had ordered. 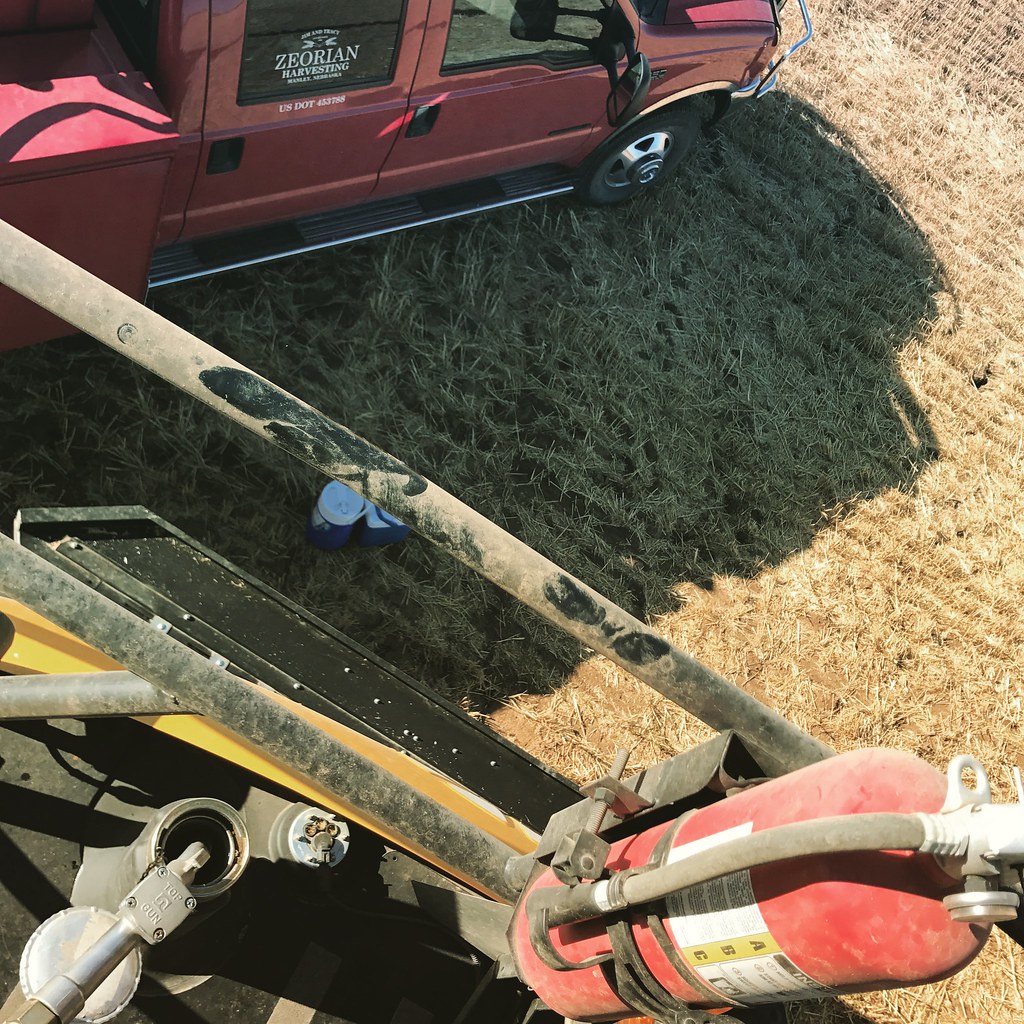 Fueling is one of the morning chores. This particular day was cooler than the previous had been. It was a wonderful change, but it didn’t last long. 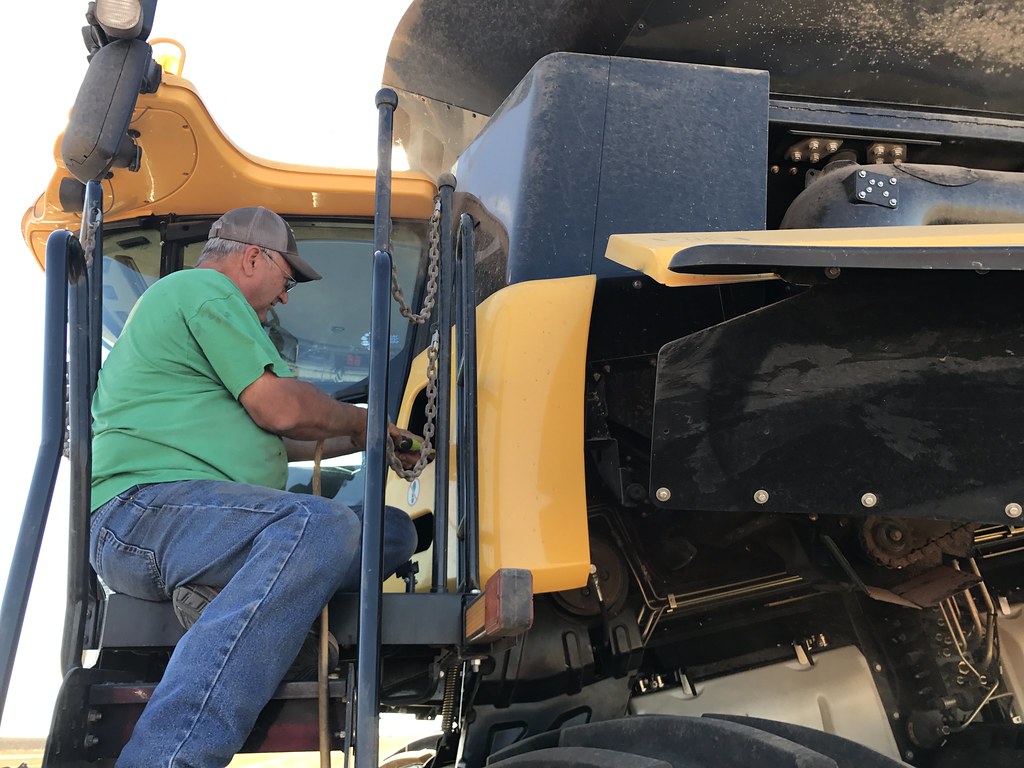 Another morning ritual – blowing out the air filters. 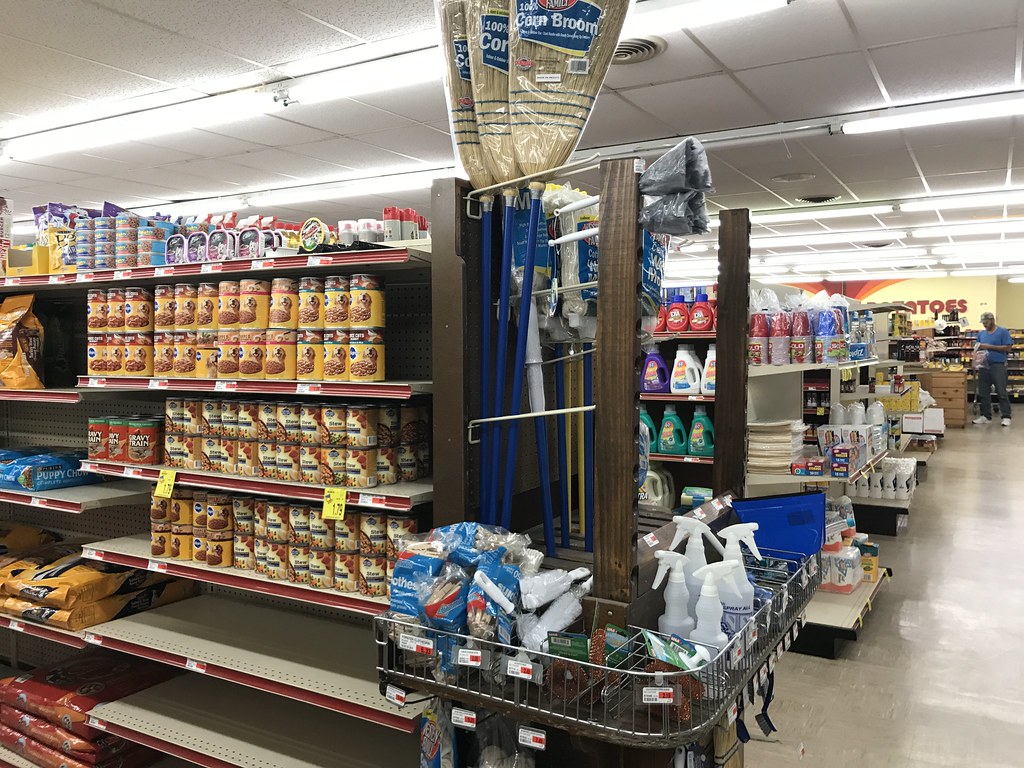 Claude, Texas- I absolutely love small-town grocery stores! They may not have everything, but they have what you need (and then some)! I’m certain my girls would love this one… the merchandise is placed ever so neatly and in perfect rows! 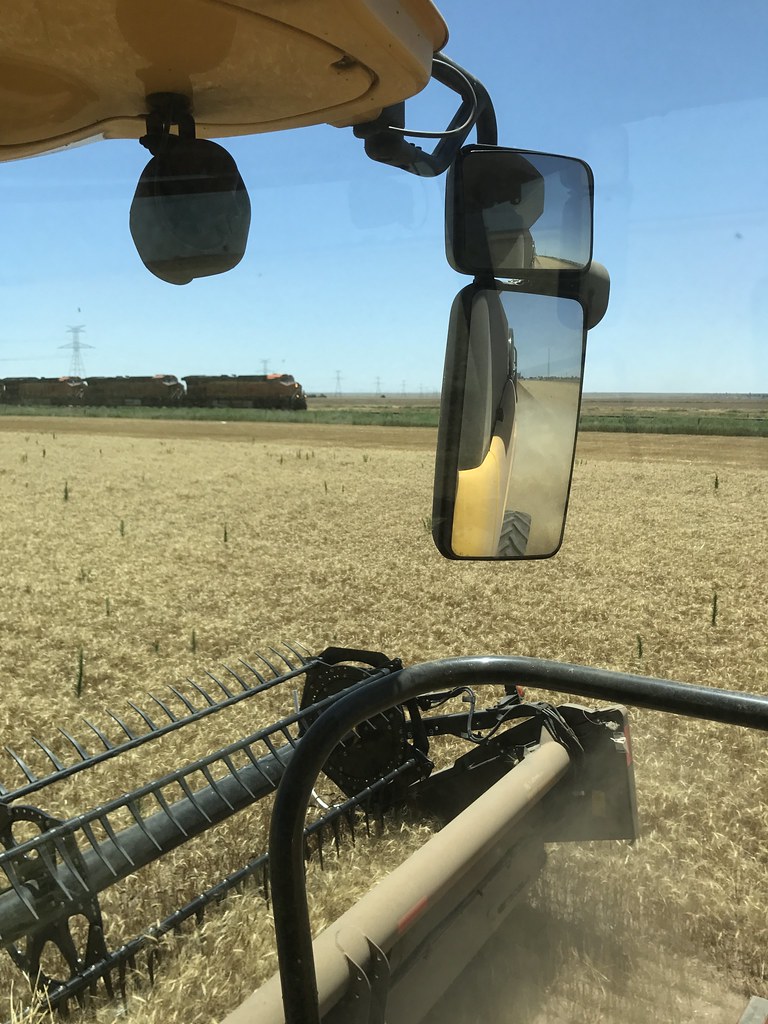 This field ran right along a very busy four-lane highway and railroad track. It’s amazing the crazy things you see going up and down the road! Do you suppose anyone took the time to look over and wonder what that big yellow machine was doing? 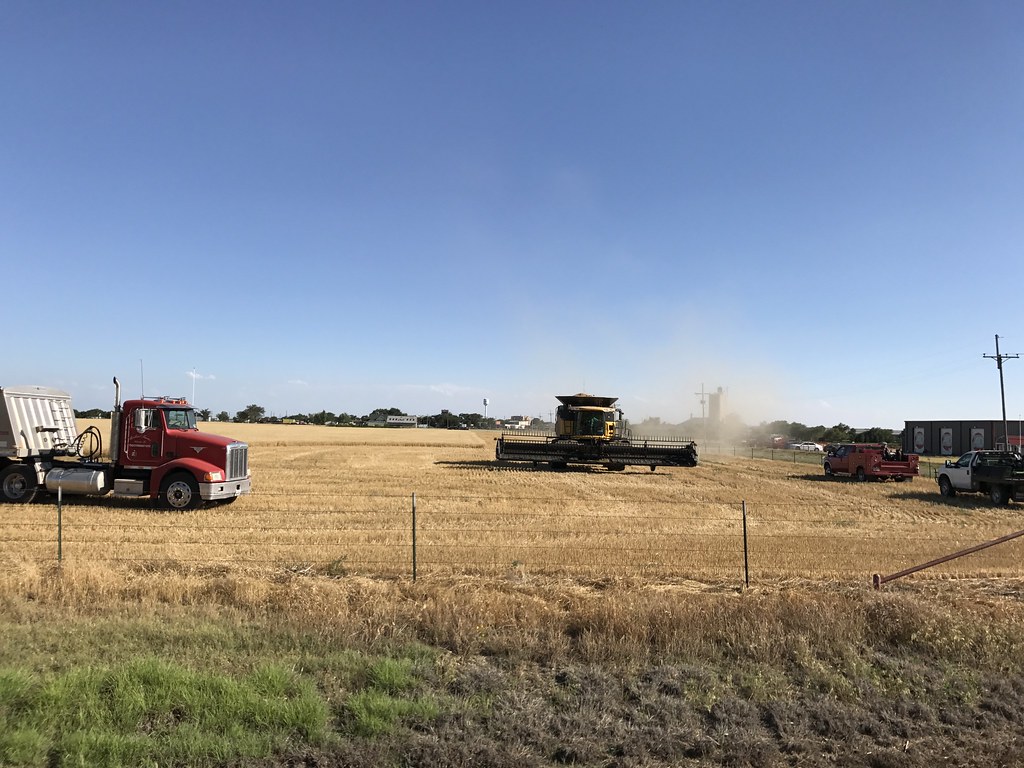 Practically in the Claude city limits! 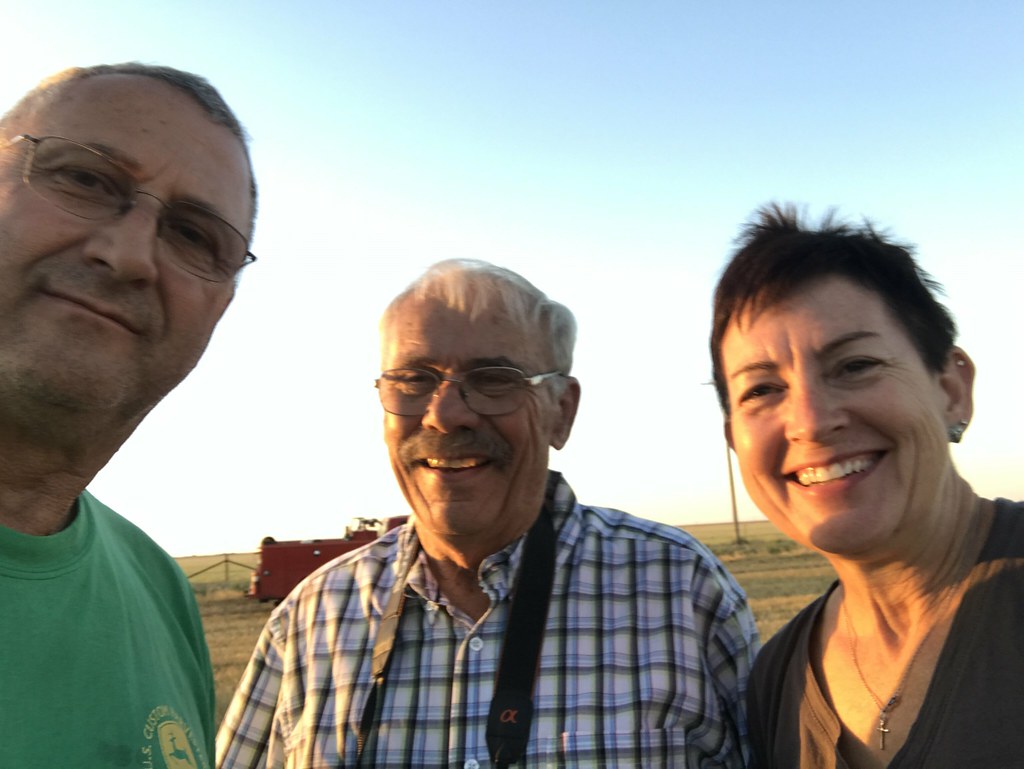 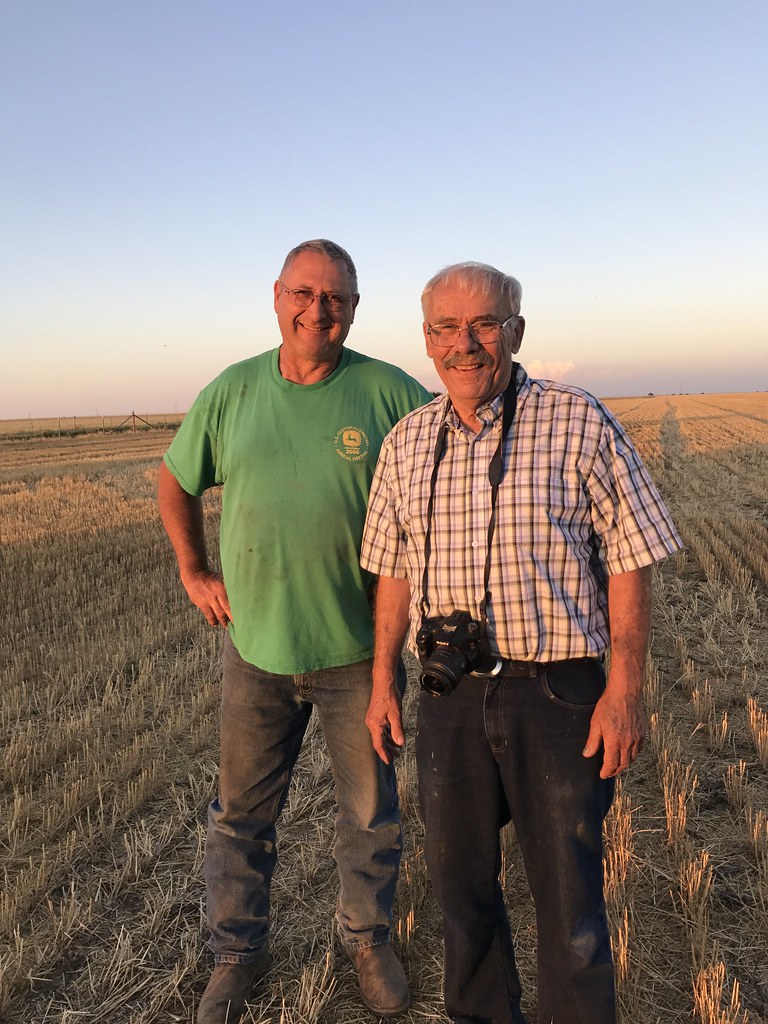 This one is good. A couple of harvesters (Roger Peters and Jim) enjoying the afternoon talking about what they talk about…combines! 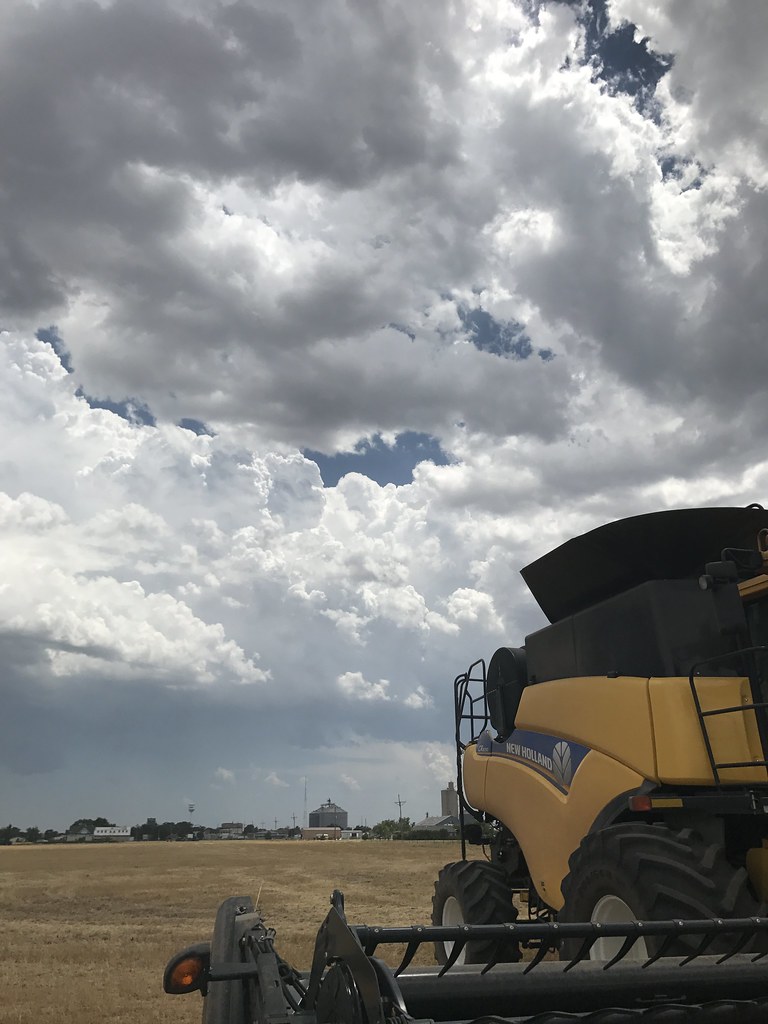 Today’s 100 degrees caused a few clouds to blow up right above us. Thankfully, though, they moved eastward. 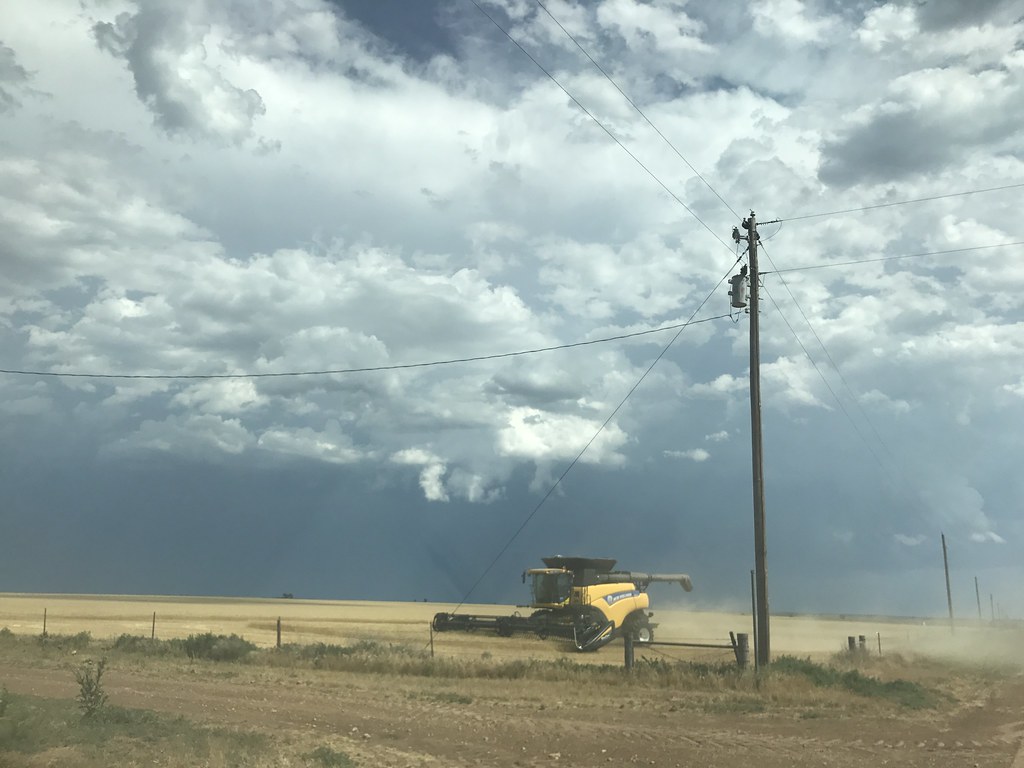