All Aboard Harvest | Steph: Hit the trip meter
14602
post-template-default,single,single-post,postid-14602,single-format-standard,qode-quick-links-1.0,ajax_fade,page_not_loaded,,qode-title-hidden,qode-theme-ver-11.2,qode-theme-bridge,wpb-js-composer js-comp-ver-5.4.7,vc_responsive

Dodge City, Kansas – Would you believe I have been a part of the AAWH family for six years now, and I have never even been to the homeland of High Plains Journal? Unreal, but that is no longer the case. I drove into town on Wyatt Earp Boulevard and took a quick look around and knew right away I would get along just fine around here. I could live here. We will be harvesting here for the indecipherable future as it decided to rain on our harvest parade last night (06/21), so I’m hoping to rub elbows with some of the HPJ staff. I also plan on doing quite the exposé on the town in an upcoming post as it is a definite harvest classic. We did get into the wheat a bit, and it’s beautiful — 50-60 bushels per acre with a 58 pound test weight. There’s nothing like wheat harvest in Kansas.

I wish I had an internal trip meter. I should have pushed this spring to keep track of the miles I put on myself. Scratch that — should have started it last winter, because then it would include my international travels. The more I think about it, the further my curiosity for this goes. Just imagine 26 years of Midwestern travels via the harvest run plus all the trucker adventures, various road trips with friends and international travels. My trip meter would probably be broken by now.

Speaking of my hypothetical trip meter, this past weekend would have added 2,118.3 miles to my grand total, and here’s why:

I can count on less than one hand how many times I’ve been anywhere but the harvest trail in the months of June, July and August. The first time was when I was an ornery middle-schooler and wanted to go to a mainstream summer camp, so my mom signed me up thinking we would be home in time (my week at camp would be during the first week in August). Low and behold, we got hung up in Hemingford, Nebraska; and she had to road trip me up to Wahpeton, North Dakota, where my Grandma Marlene picked me up and took me the rest of the way home for camp. The second time was the year I graduated high school, and I went on a class trip to Spain the first two weeks of June. Luckily, a friend of mine was heading down to Kansas City, Missouri the week I returned to the States, and my parents drove there from Enid, Oklahoma to retrieve me. And now, we have a third time.

My best friend from high school asked me to be her maid of honor in her upcoming wedding, and there were pre-wedding festivities this weekend that I just couldn’t miss. I also got to see Peter, so it worked out great actually. As I explained the weekend to one of my friends over the phone, “It was quick and chaotic,” she just laughed, telling me that was basically my life in a nutshell. I can’t argue.

Quote of the Day – “And everyone said I would never get paid to stare out a window… joke’s on them!”

Stuff Harvesters Do – Use the straw of a head of wheat for dental floss. 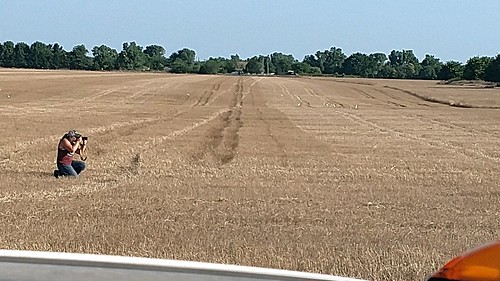 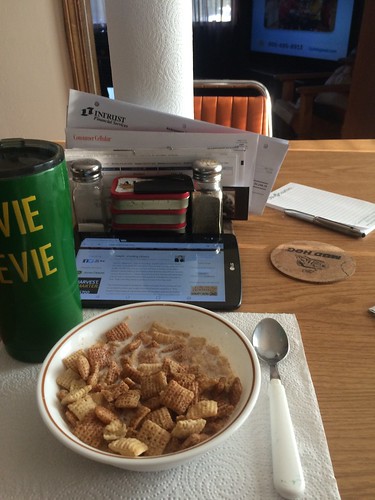 Photo from Uncle Steve of Russell Harvesting. He told me he was “having breakfast with Steph” via the AAWH blog. 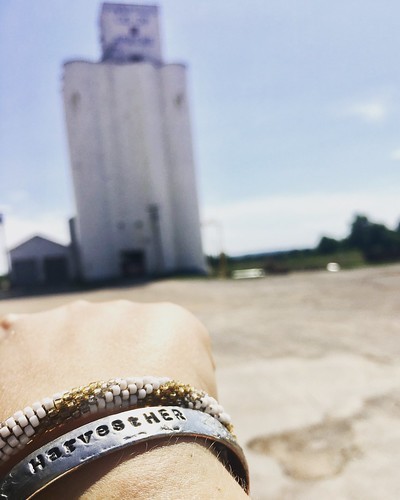 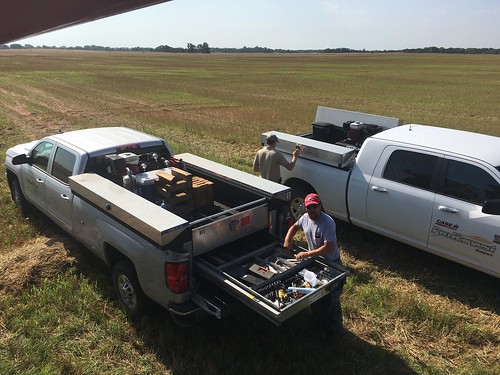 So much support! Case ProHarvest and MacDon Harvest Support both paid us a visit one morning. They are such great help — don’t know what we would do without such great support from these two companies. 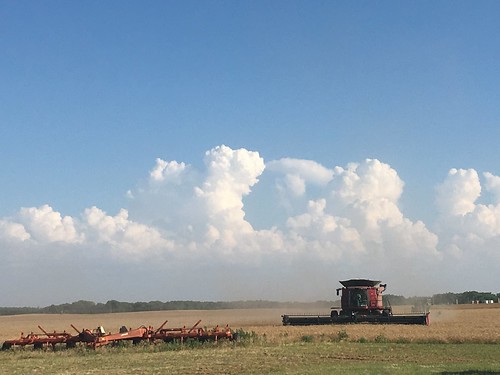 Those clouds are awesome. 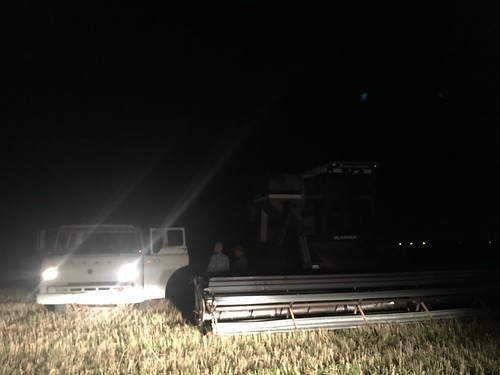 We are playing this game between Anderson Harvesting, C&K and now MacDon. It’s called “Cabover Alert.” If you see a cabover, you must take a photo, and then your team gets a point! I followed this 1969 Ford out to his field to get this photo. WORTH IT. 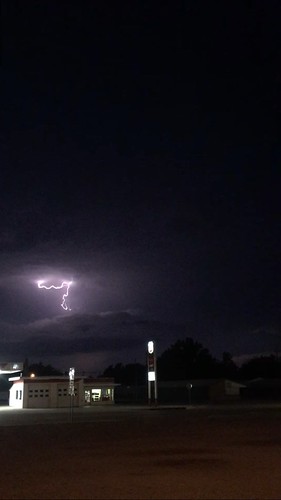 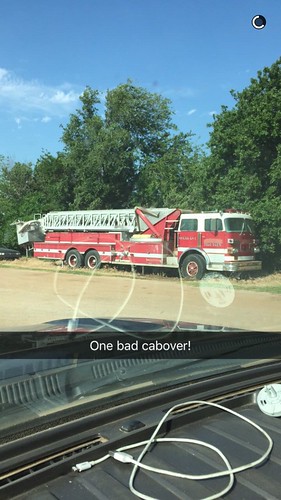 A solid cabover shot from C&K. 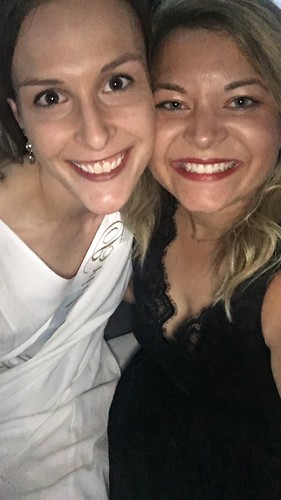 Steph and Katie (the bride-to-be!) 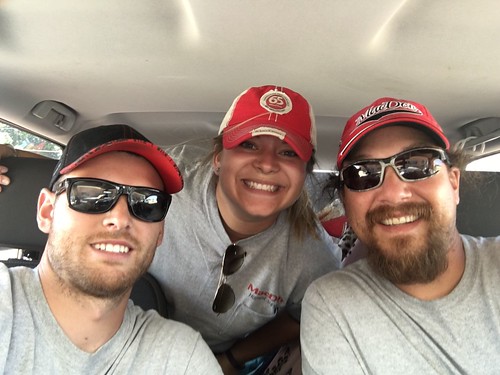 Steph with the MacDon guys that always come out to help us. Thanks a million, Evan and Eric! 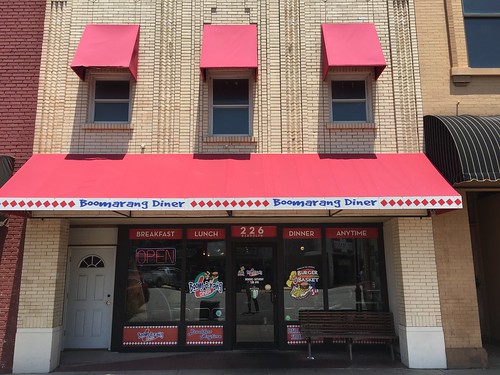 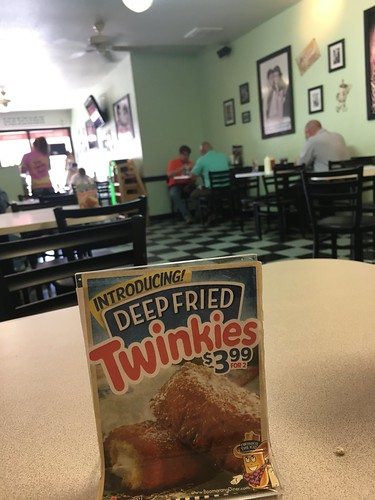 Love the old style setup. There were photos of Elvis and Marilyn Monroe all over the walls. 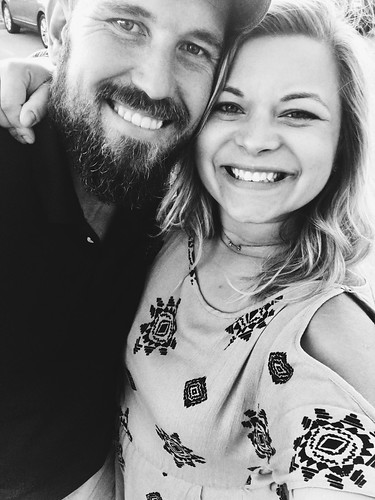 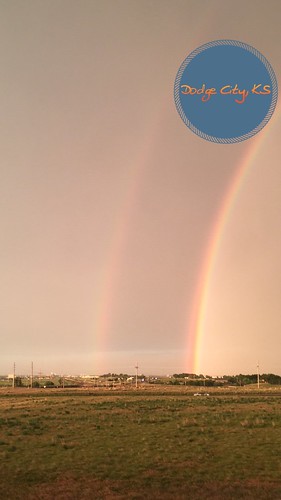 Double rainbow after the storm. 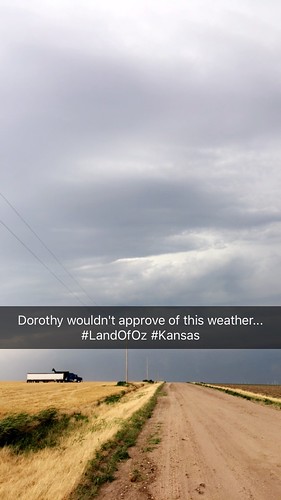 A little Wizard of Oz humor. 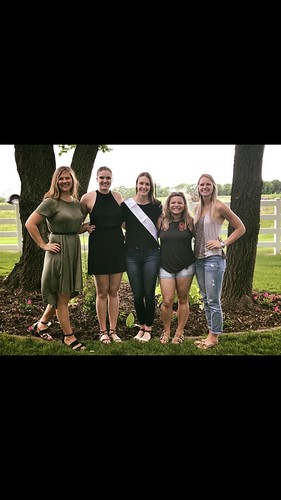 Bridesmaids with the bride! 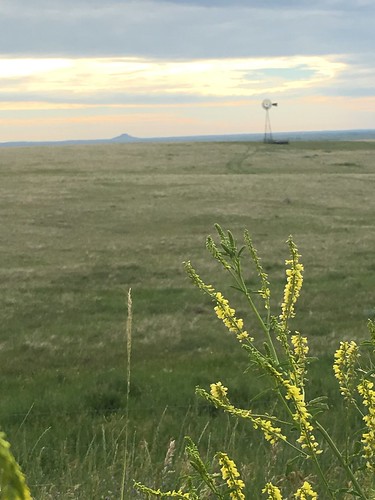 Stopped alongside the road for this one.

All Aboard Wheat Harvest™ is sponsored by High Plains Journal and John Deere. You can contact Steph at stephanie@allaboardharvest.com.