Dodge City, Kansas – There are two cup holders in the combine. I jumped in for a few rounds and put my lemonade-flavored Monster Rehab next to John’s filled-to-the-brim Yeti coffee cup. Combining along, I hit a plethora of bumpy spots in the field, a typical occupational hazard. I go to take a sip of my drink and got a sip of half coffee/half lemonade Monster. I don’t recommend the combination. Here’s to you, bumpy Kansas wheat fields.

DISCLAIMER: It will never be just “a few rounds.” That’s the trick phrase a harvester will use to get you to switch places for whatever reason.

Before that story was given the opportunity to occur, we did incur some rainy days that were filled with wrenches and combine rehab. That’s the thing about harvest — time is of the essence. When the conditions allow to cut wheat, you cut wheat. A lot of times, any fixes that happen during this harvest prime-time are effective but done in a haste in order to get the combine rolling again as soon as possible. However, when it rains, it’s time to tear things apart and fix things up right. A lot of my posts have included MacDon Harvest Support lately, but it’s because… they rock! They come out to us and not only bring the parts but also the knowledge on how to correctly put the parts on the header. There are so many replaceable parts on these headers that when I asked for an estimation, they laughed at me.

You will begin to notice there will be not one but TWO combines out in the field now. With another combine comes another truck and two more crew members. John’s dad, Tim, brought his own 8240 Case down the other day along with an additional truck driver named Bo. And then there were five.

Quote of the Day – “I threw ice cream at her. She’s better now.”

Stuff Harvesters Do – Ask anyone, and I mean anyone, if they have or know someone who needs their wheat cut. This means waitresses, grocery store clerks, gas station attendants – you name it. 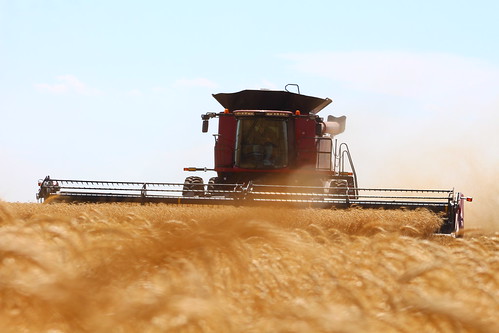 That red does look pretty nice against the wheat. 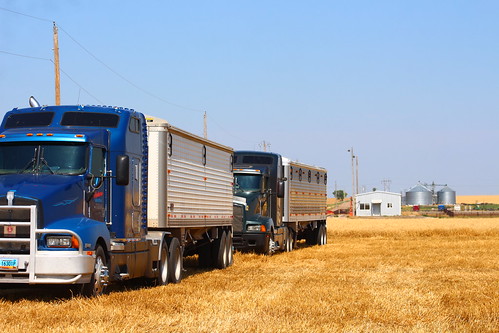 All lined up, just the way I like it. 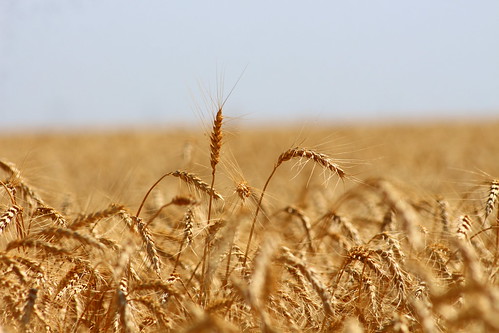 Kansas wheat is always so pretty. 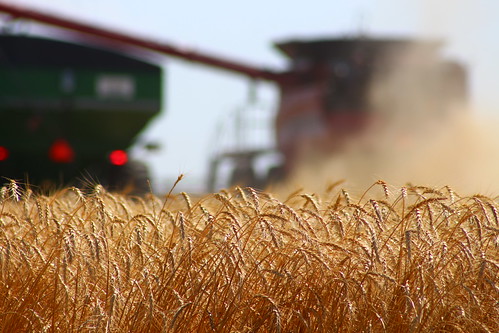 Always on the go. 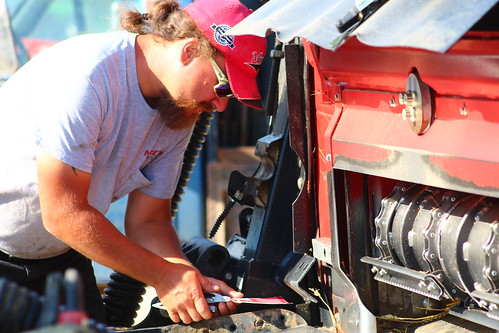 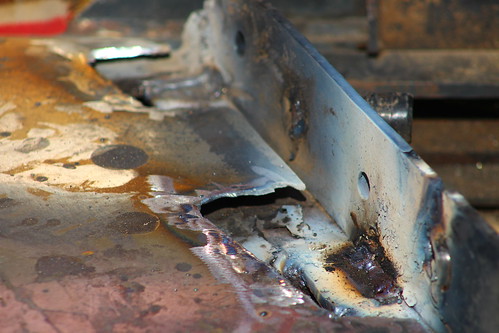 Welding up the frame underneath the center belt on the header. 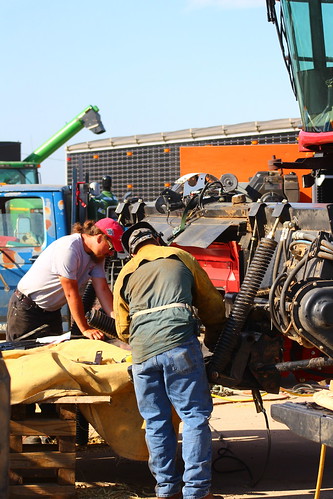 The combine is named “Loretta,” and she received a lot of love the last few days. 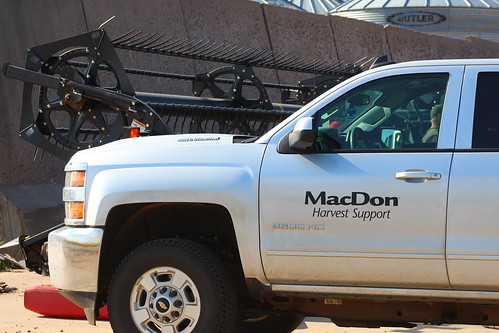 A sigh of relief, if audible, when this pickup drives up. 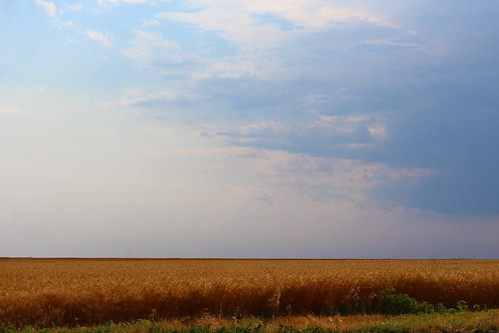 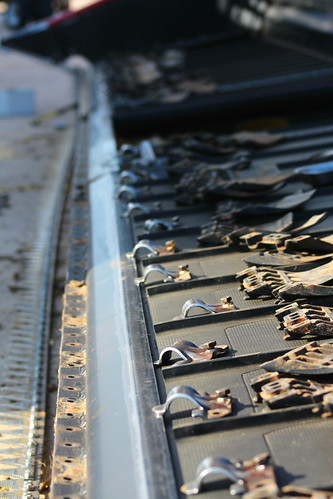 Since time allowed, guards and sickle blades were also replaced. 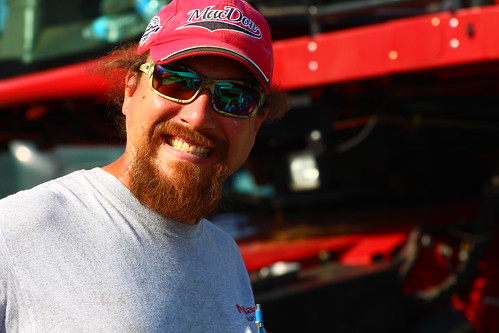 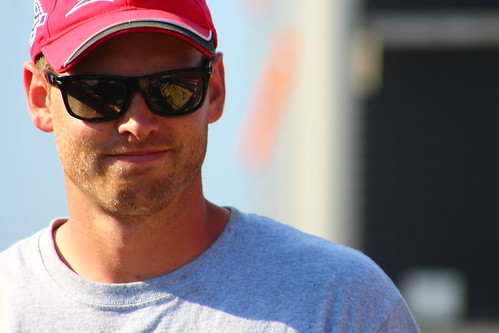 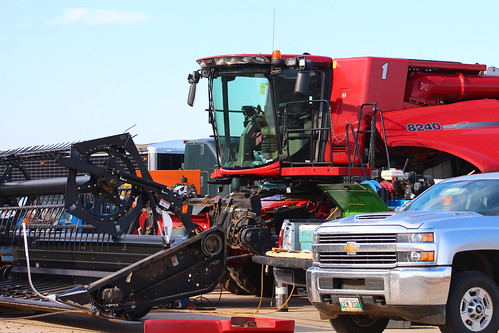 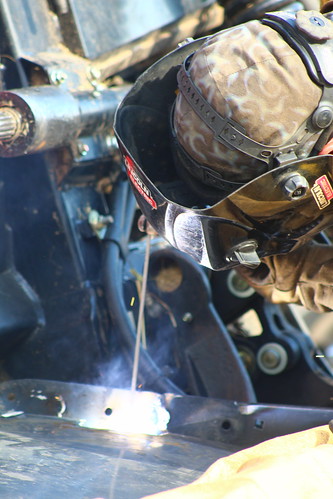 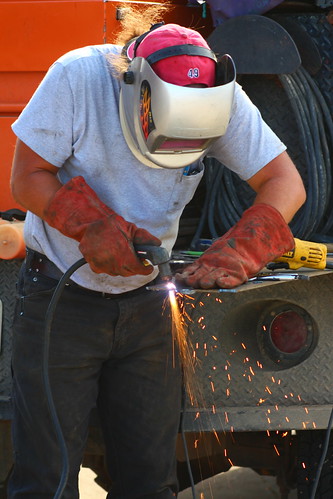 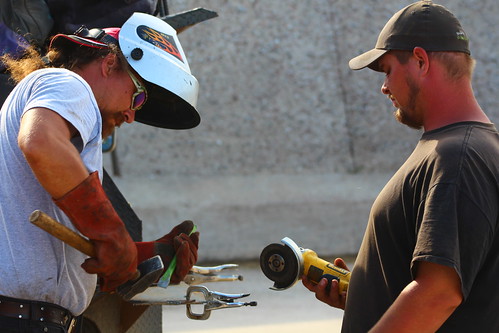 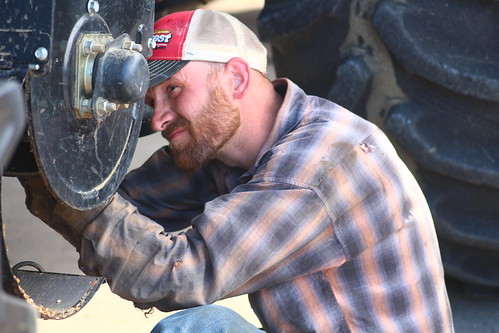 John checking over the clean grain elevator on the combine. 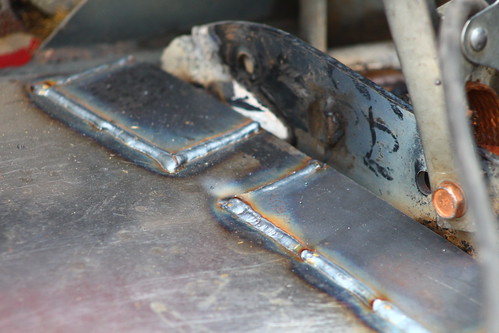 All welded up and ready to rock! 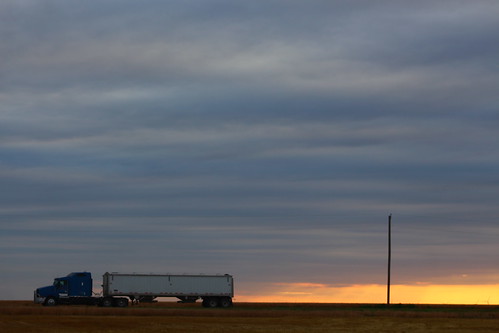 All Aboard Wheat Harvest™ is sponsored by High Plains Journal and John Deere. You can contact Steph at stephanie@allaboardharvest.com.