All Aboard Harvest | Tracy: Now what?
14778
post-template-default,single,single-post,postid-14778,single-format-standard,qode-quick-links-1.0,ajax_fade,page_not_loaded,,qode-title-hidden,qode-theme-ver-11.2,qode-theme-bridge,wpb-js-composer js-comp-ver-5.4.7,vc_responsive

Garden City, Kansas – My oh my… the days certainly run into each other, and the weeks are gone before you know it! We left home four weeks ago this past Sunday (7/2). Seems like a whirlwind of events since we pulled away from the driveway as Taylor and Jenna were waving goodbye. 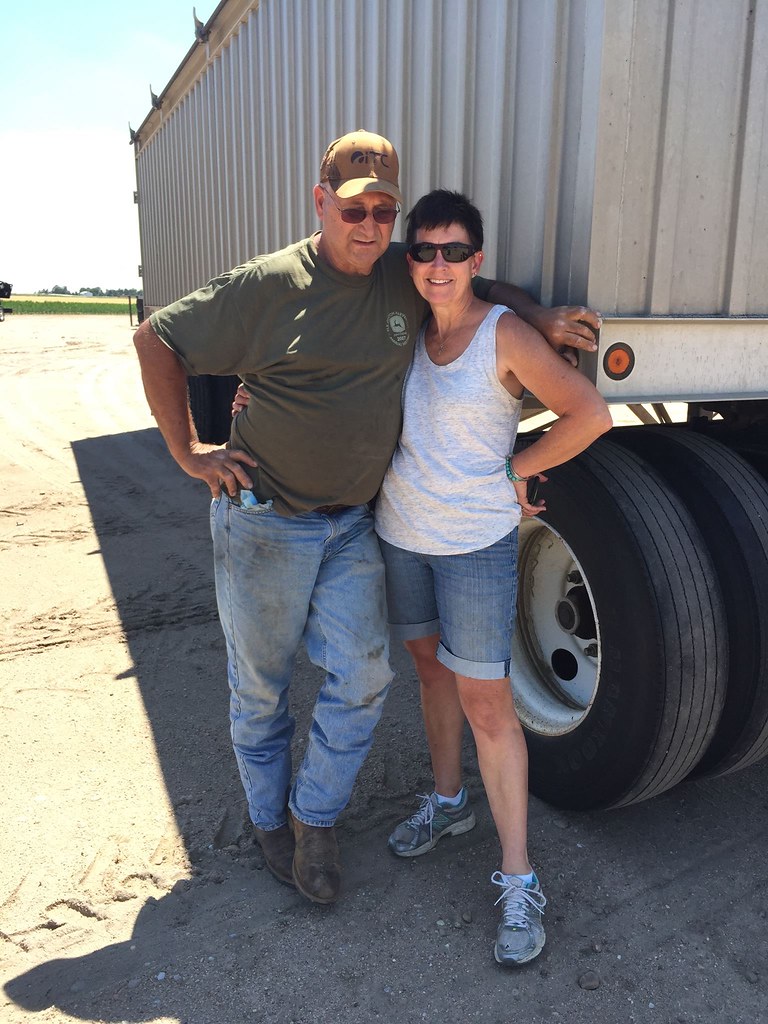 Because it’s what harvesters do! (Photo credit: Nancy Eberts)

So, let’s have an update.

First of all, Jamie would like me to apologize to all the harvesters out there. It is HER fault that we are up against no work, and we continue to lose acres to cut. You see, back in November she announced to us she and Curt were expecting baby #3. The very first thing I did was count ahead nine months, and all I could do was hang my head. The due date…July 17. Well dang! This doesn’t work very good when you know you’ll be away on the wheat harvest but maybe… just maybe… I can get away for a few days to help. I wasn’t going to worry about it because God always has a plan, and it might just work that I could escape for a few days. I was thinking we should be in Colorado at that time and maybe it’ll work that someone can sit in the combine for me while I run back home. So the prayers started. And now? Well, you know the rest of the story. In all honesty, with things the way they are for everyone right now, I am hoping I can get back home for a few days. Although, it is quite possible that the few days will lead to a couple of months. 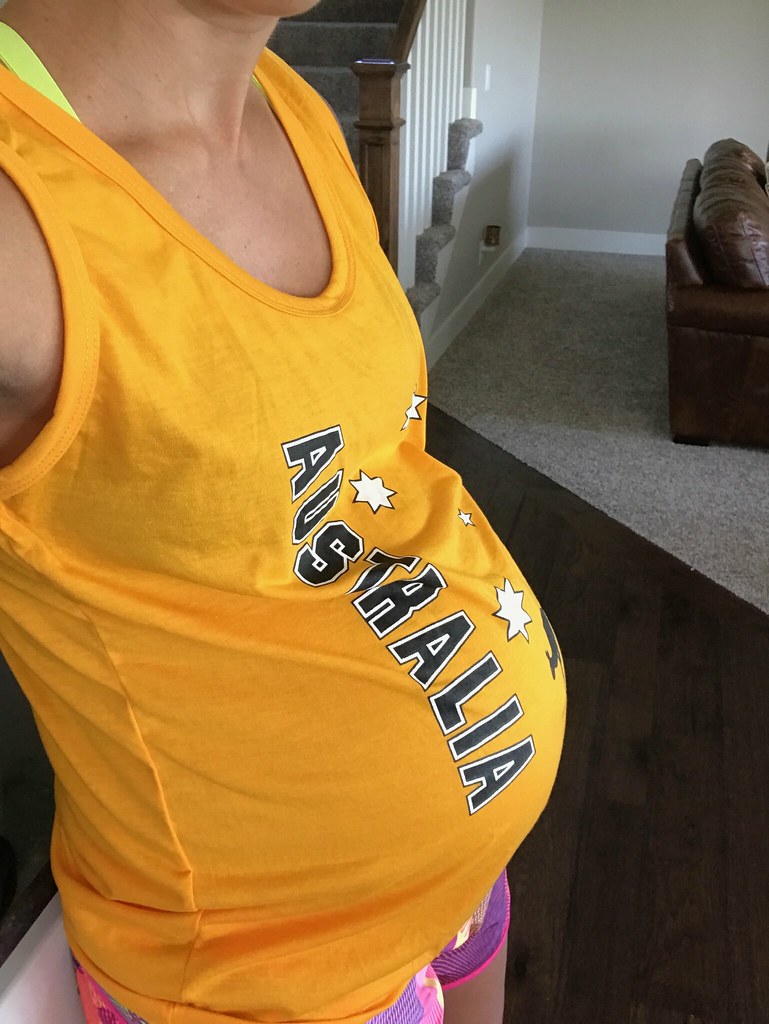 Because of the Combine Cam, I have gotten acquainted with a farming family in Australia (Kalimar Ag). They put a “goodie box” together for the Z Crew and sent it to Jamie’s house. She immediately put this on and sent a picture to me. I forwarded it to the Davey family in Australia, and they returned with this comment, “The stars are the Southern Cross – only visible in the Southern Hemisphere a good reminder of God’s majesty.” Very cool!

Okay, let’s back up to Texas when we found out we had all of our Garden City acres hailed out. That very day, Jim made a couple of phone calls, and one was to an acquaintance we had in Garden City. Well, that phone call paid off. We loaded the combine a week ago Sunday (6/25) and headed to Garden City. The next day, we unloaded and had the day to ourselves before getting started again. We were blessed with visitors. Smiling faces and a hug was something I was in dire need of. Little did they know, these HarvestHERs showed up at just the right time! 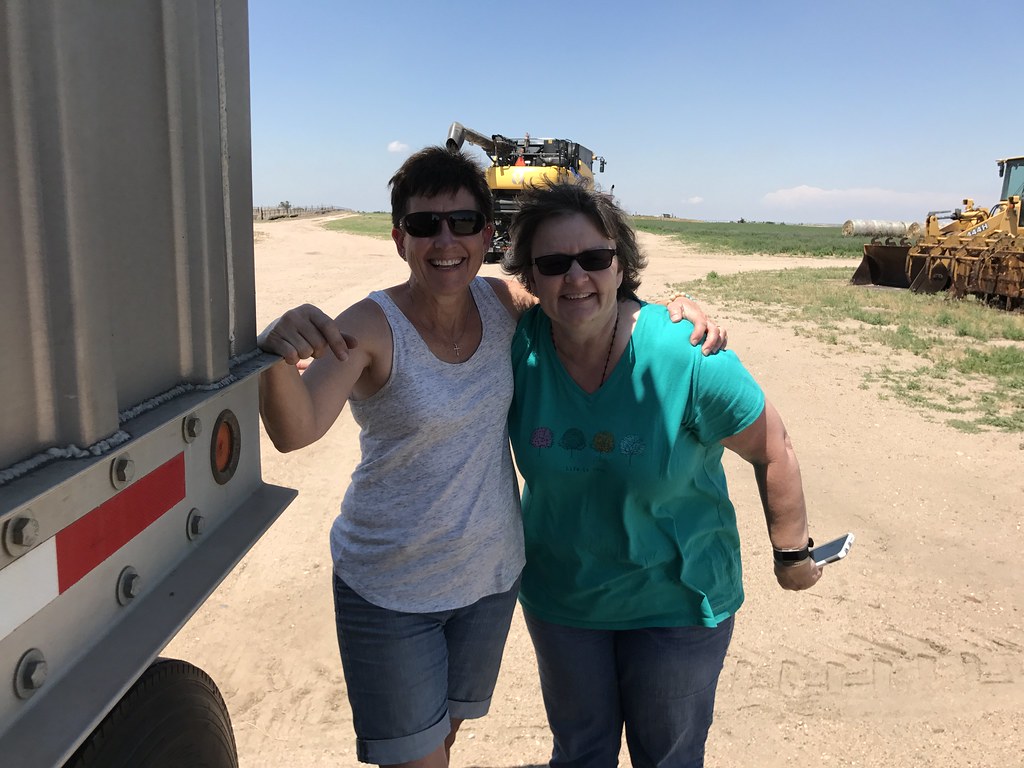 Myself and fellow HarvestHER, Nancy Eberts of Eberts Harvesting. Inc. 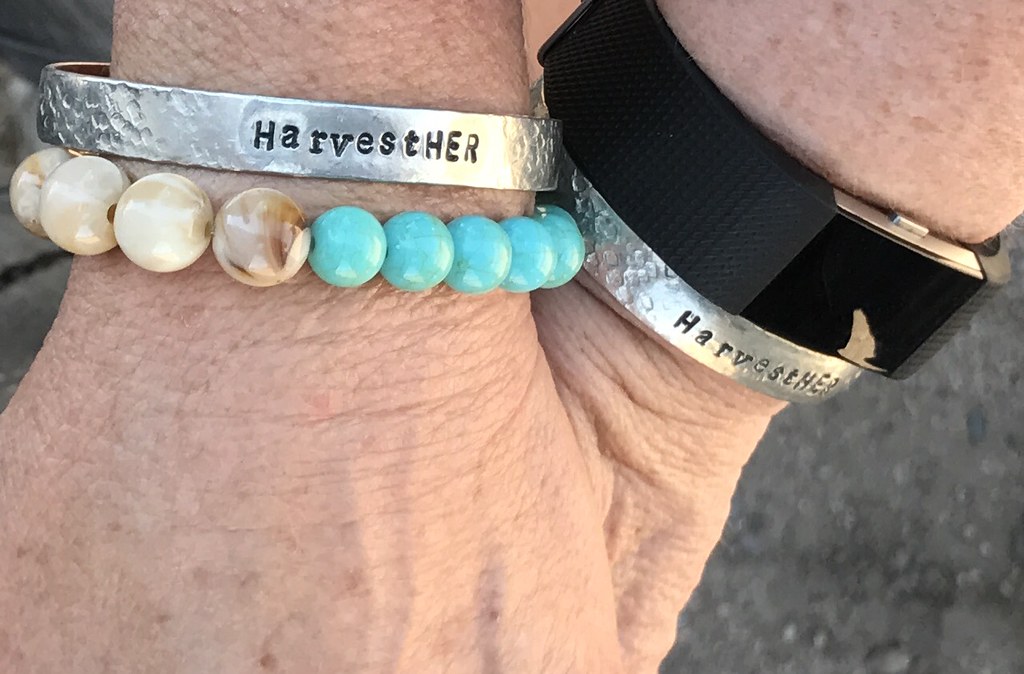 These beautiful bracelets can be purchased on the www.harvesther.com website. 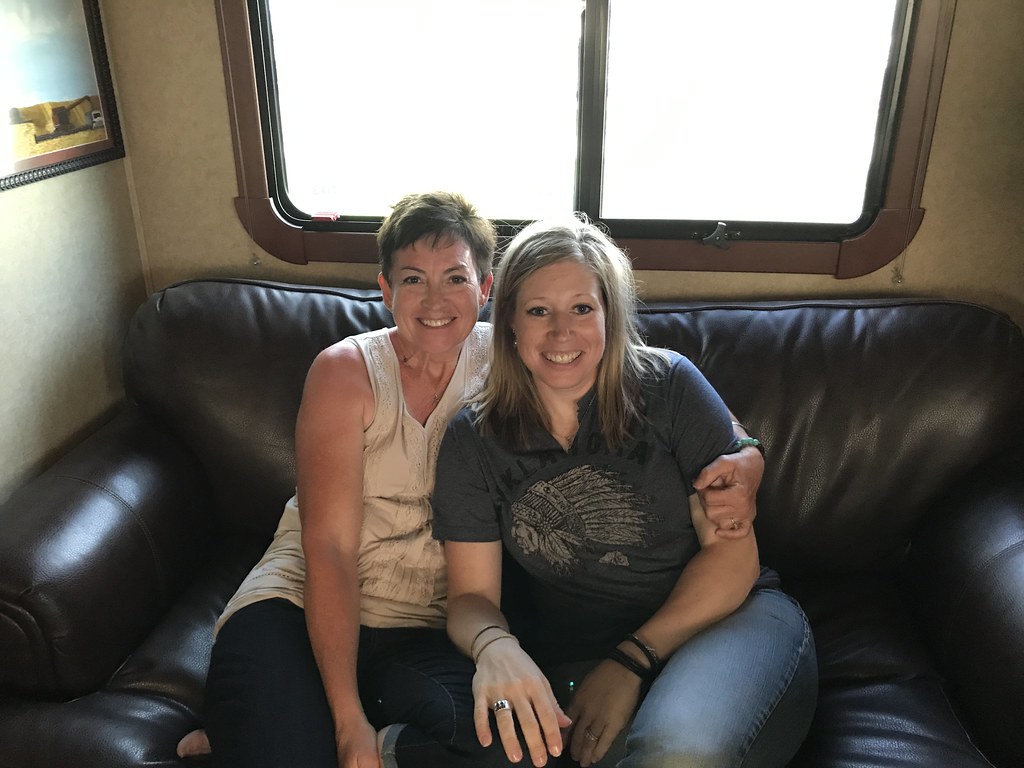 After Nancy left, HarvestHER Amanda and Anders Buus Thomsen of BT Harvesting stopped for a visit and supper in Garden City.

And then we went back to work. 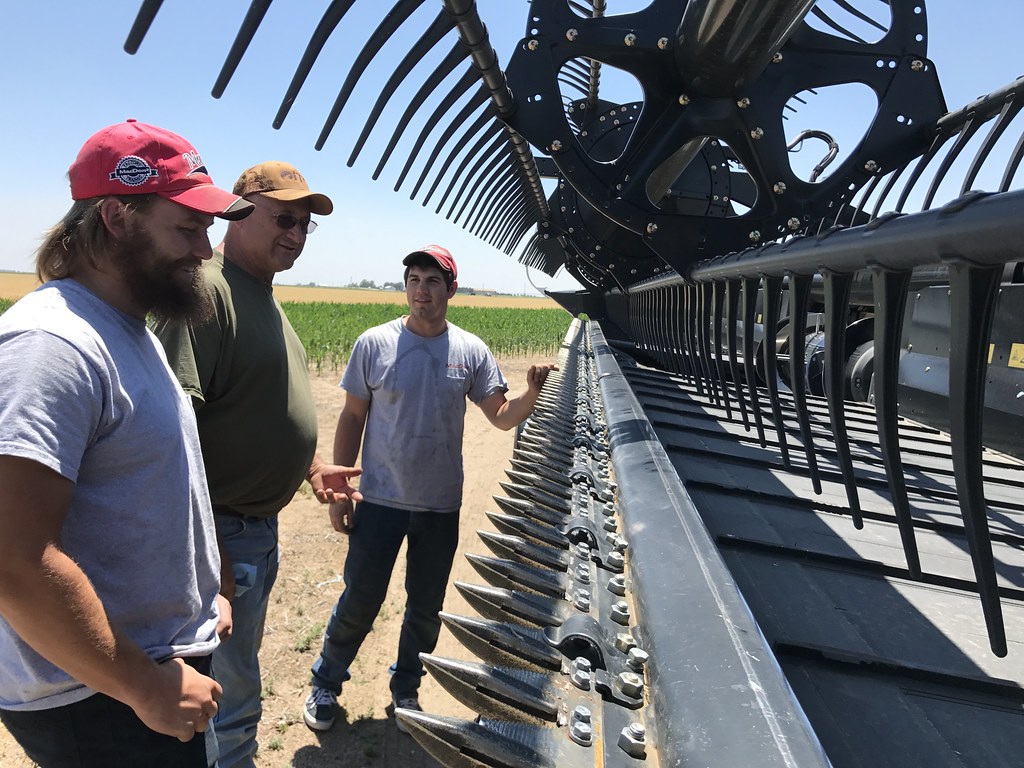 Before we got back in the field, Jim called the guys at the MacDon Support trailer and had them come out and help him with a couple of items. Karlyn and Colin are the interns traveling with the trailer this year. They are both from the Winnipeg area and said they were enjoying their time on the road. 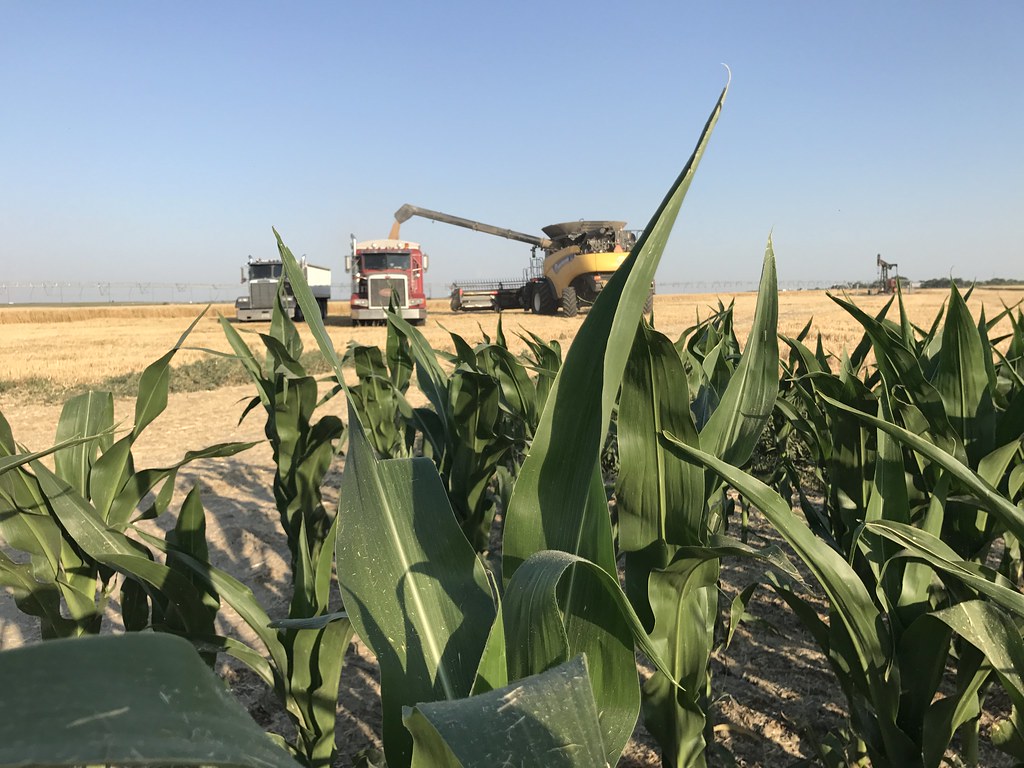 The irrigated circle of wheat we cut had corn planted in its corners. I think I could literally see it grow each day while we were there. 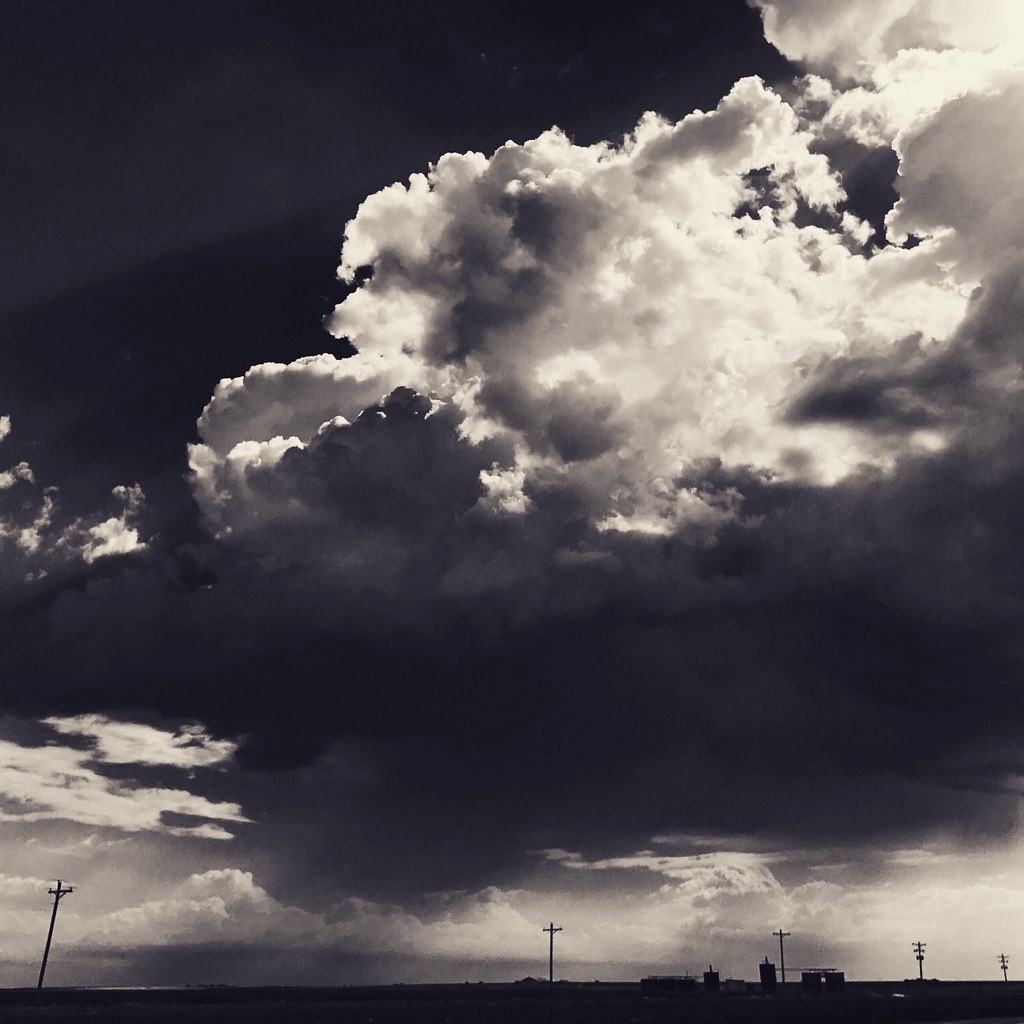 We thought we were going to miss the showers during the week… not so much. This cloud built up right over the top of us and showered while we were servicing the combine one morning. We got started again later that afternoon. 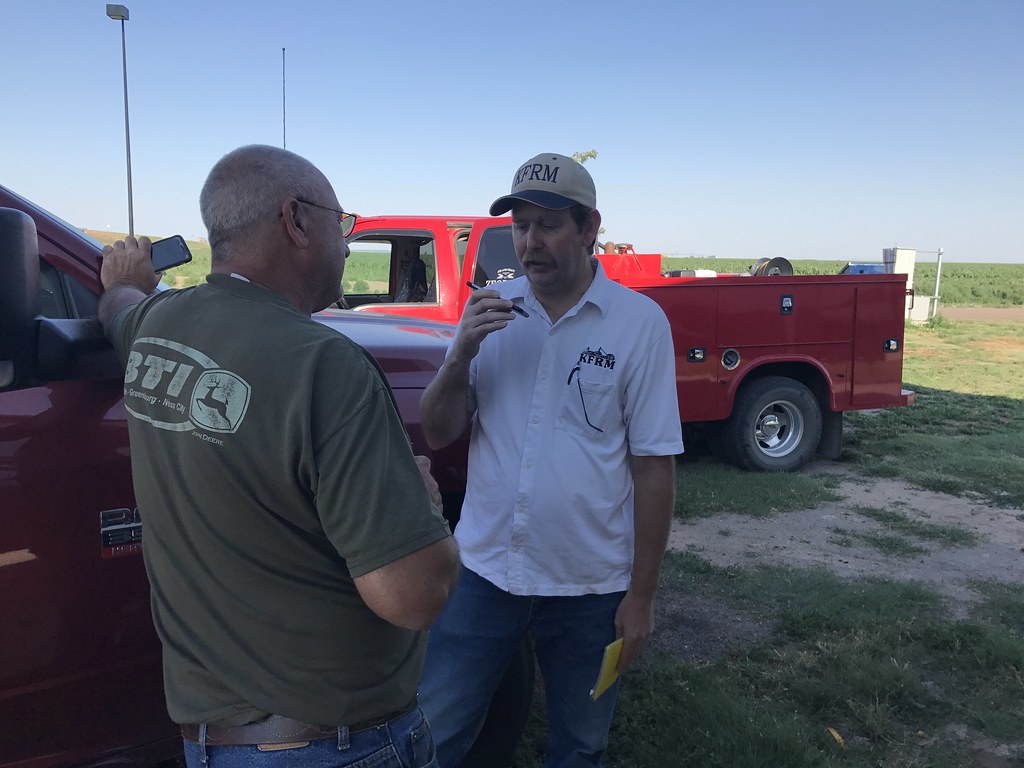 One morning before we headed out, Duane Toews with KFRM made a quick stop at the trailer house for an interview with Jim while on his crop tour through the state of Kansas.

The wheat in this area had been exposed to freezing temperatures for several days prior to having 22 inches of wet, heavy snow dumped on top of it late in April. We were so worried about the outcome after the wintery storm… who would have known it was the other white stuff we should have been concerned about. This wheat is also irrigated – not dryland farming. The straw was tough. It was high-yielding and VERY slow going. The number of acres I was able to cut in a day was less than half of what we were doing in Texas. You have to have patience when sitting in a combine cutting at 2 mph (or less) all day long. The anticipation of getting a field finished the same day it’s started just has to disappear and the quicker, the better. Although, it is fun to watch the yield monitor go as high as 130 bushels per acre. We are finished now, and the end result is an average of 65 bushels per acre. There were a couple of lower yielding fields that brought the end result down. There was one field that had a 75 bushel average. The test weights were 60 to 62 pounds. I don’t know if the wheat we cut was a variety that withstood the late wintery weather better than others. I’m sure there was wheat that didn’t fare as well, but I was quite surprised about the end result. In April, the fear of the unknown was experienced by both the farmer and the harvester. It did, however, confirm my grandpa’s saying, “Wheat will die about seven deaths before being harvested.” 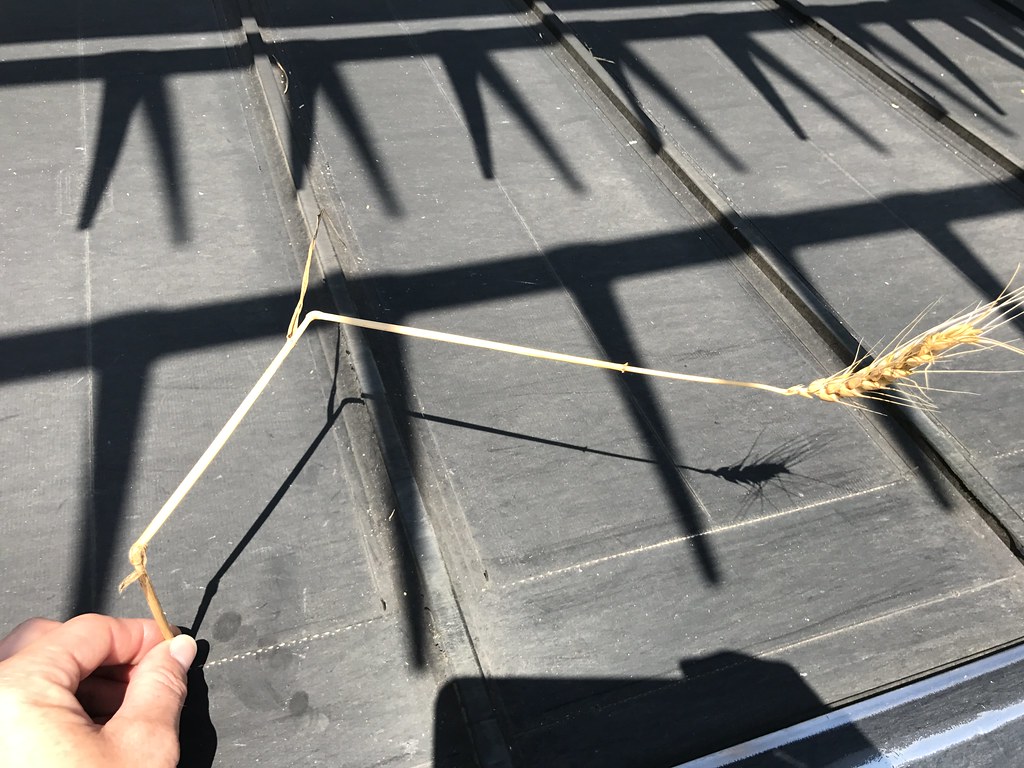 Each joint of this wheat stalk has a kink going in a different direction due to the snowstorm in April. 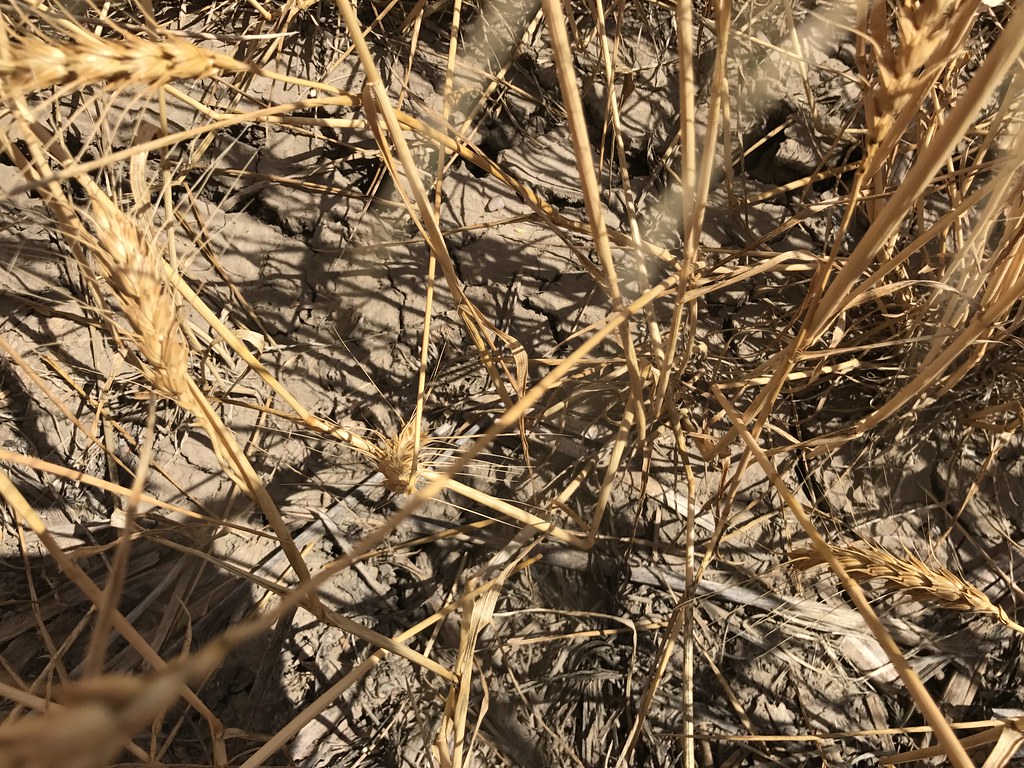 Look very closely, and you can see all the wild directions these stalks are going. Wheat is an amazing plant! 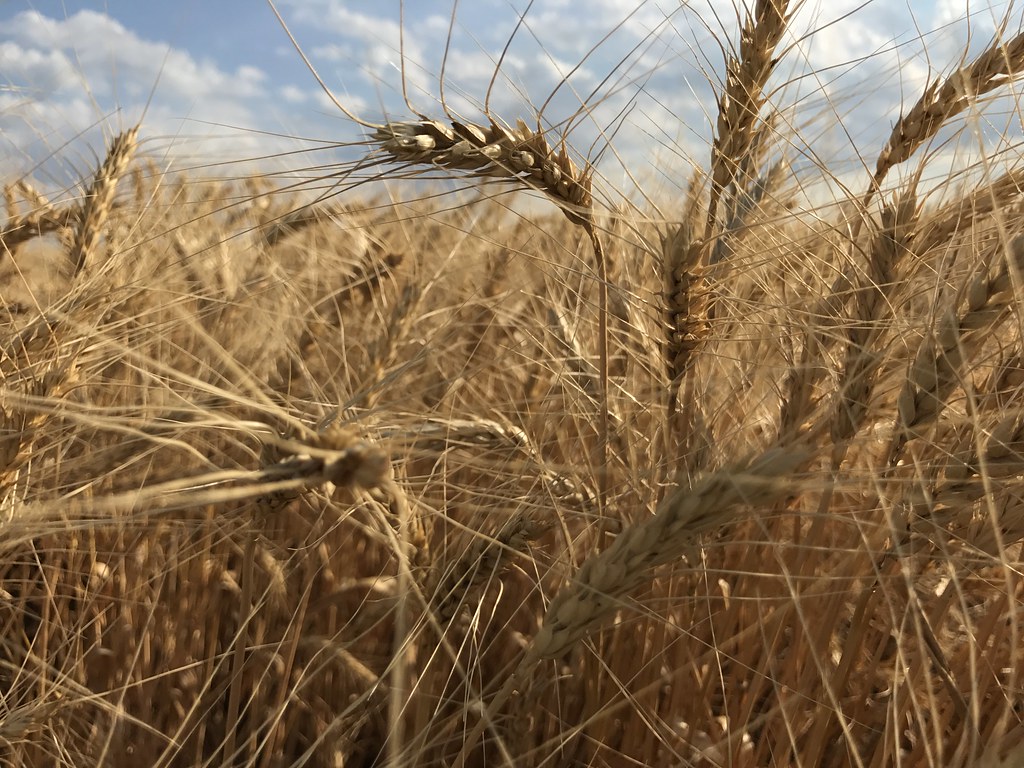 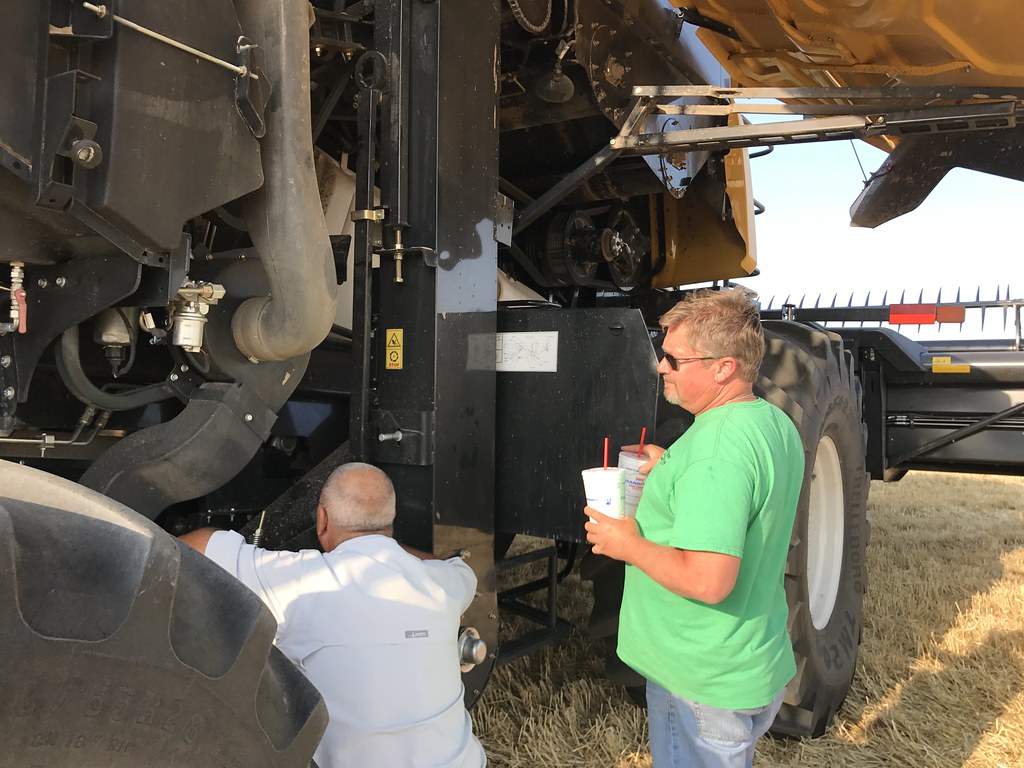 Due to not having his typical acres in South Dakota to cut, Kent (Braathen Harvesting) has been parked next to us in Garden City. He did find some acres north of Scott City to keep him busy for a few days. Normally, he would be in Onida, South Dakota; but due to the drought, there are no acres there to cut. 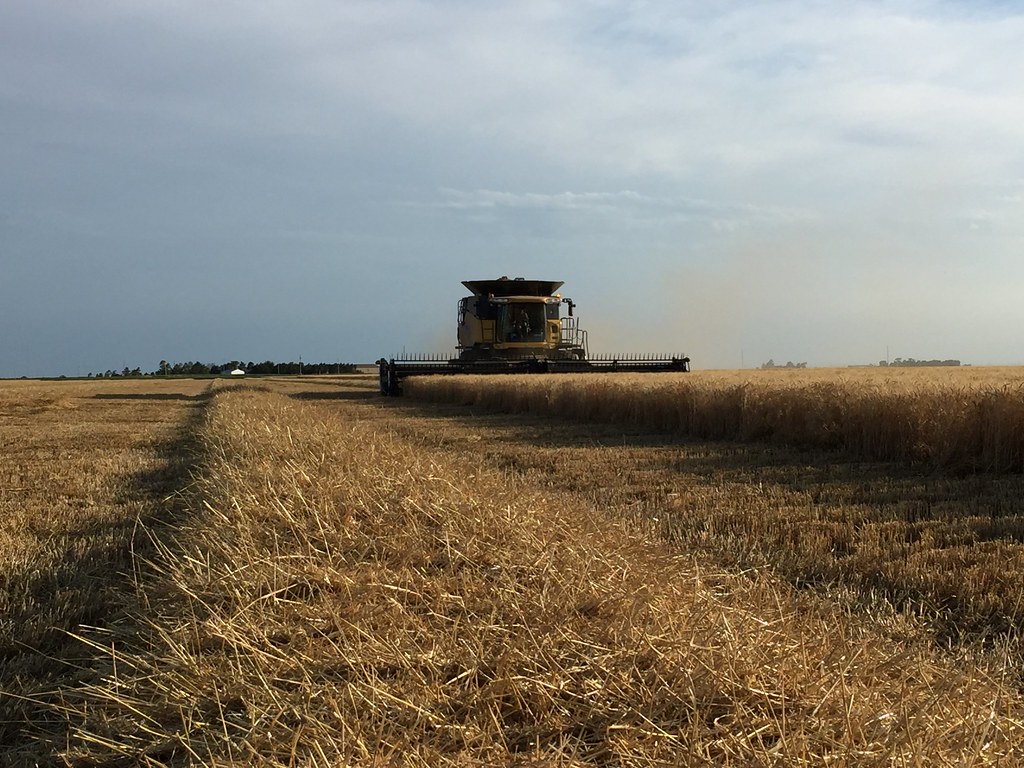 I had never laid a windrow of straw behind the Beast before. This was all new and very interesting – and scary. I was told how easily the combine could plug up (DON’T STOP), and it made me very nervous. But… we got through it with no issues, and we made lots of straw for lots of bales. (Photo credit: Kent Braathen) 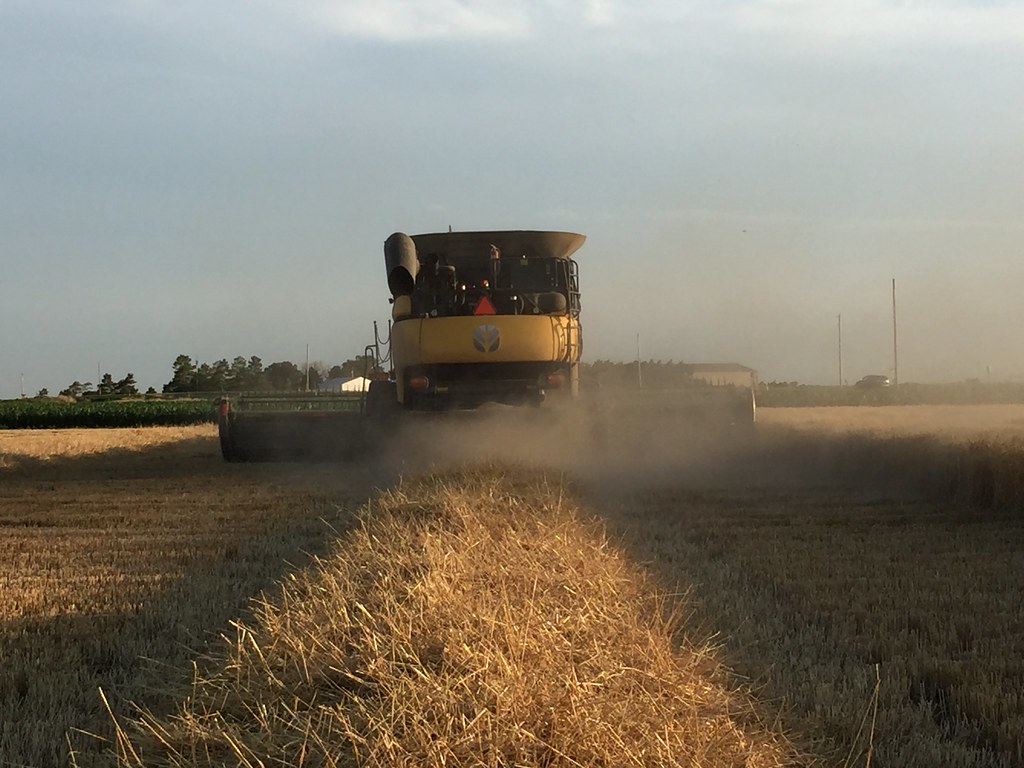 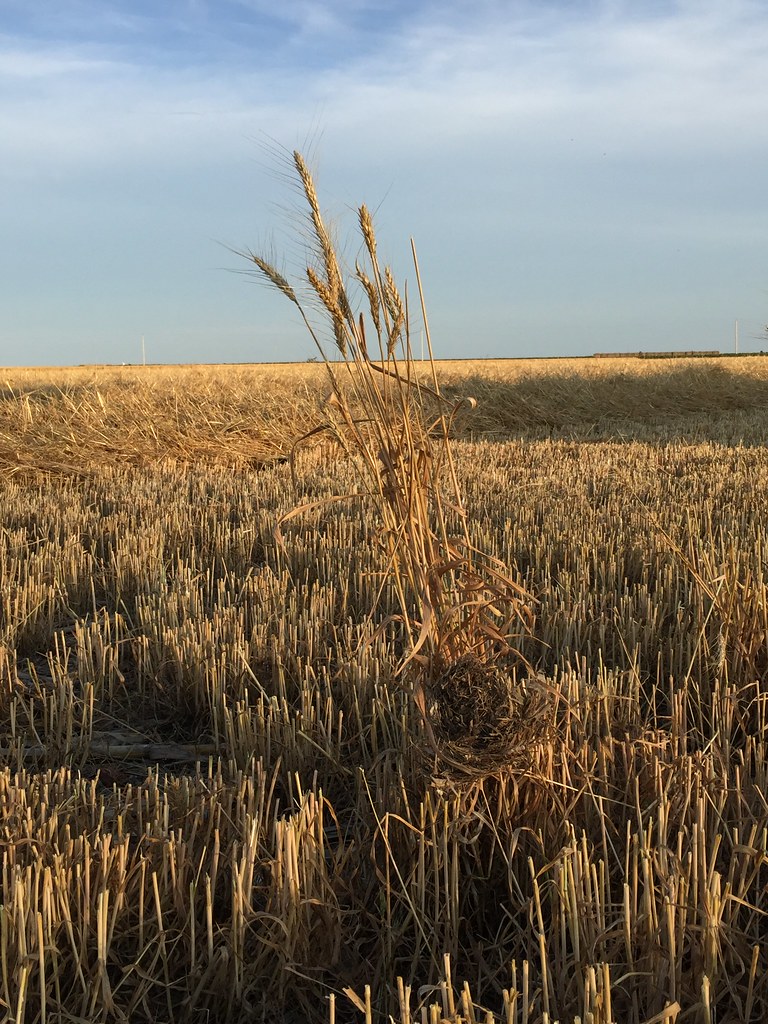 The circle had a lot of red-winged blackbirds just hanging out. I realized after I saw the nest, that it was probably the reason. It is quite amazing to think the sickle didn’t cut this up and become ingested by the Beast. It just stood proudly there among the windrows. (Photo credit: Kent Braathen)

Both videos were recorded by Kent Braathen of Braathen Harvesting.

Now what? It’s a day-to-day thing. After today, we will load up and head north to the Sharon Springs, Kansas area to cut acres harvest friends (Krumbach Harvesting) had to leave so they could make their move to Nebraska. That should keep us busy for a day or so and then? Who knows? Maybe it will be time to head home to welcome our newest grandchild! 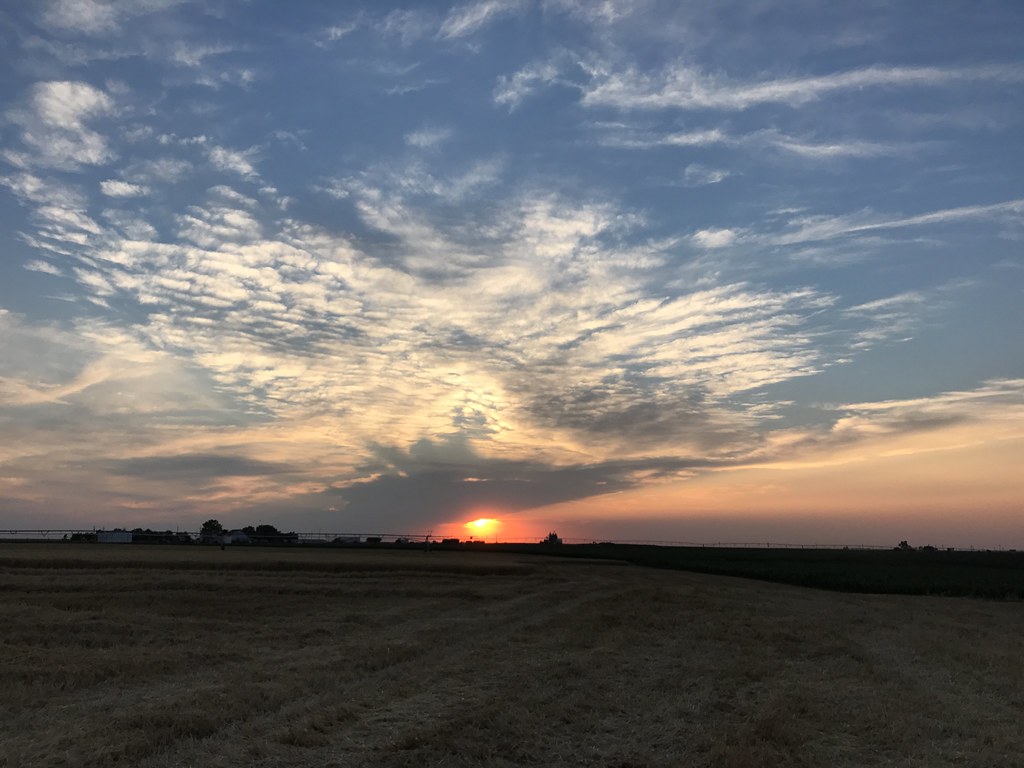 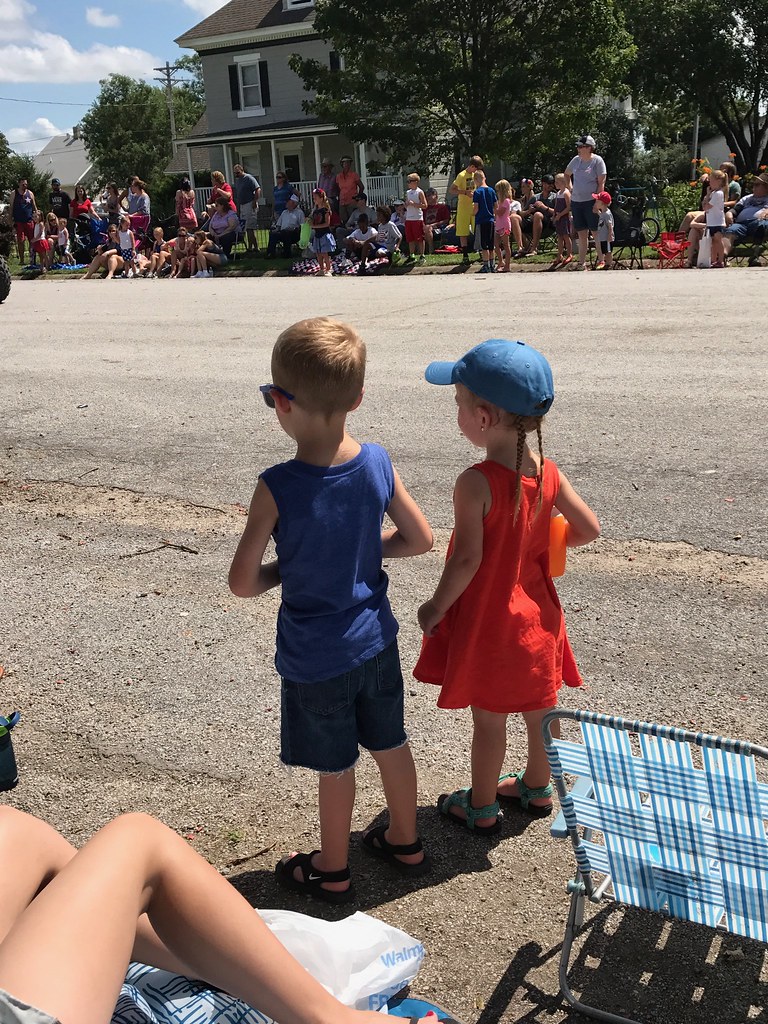 I’m missing these two little tykes and the rest of the kids today (7/4)!  When you’re so busy making memories, you don’t realize just how much you will miss those days until you can no longer make them. While celebrating this holiday with the girls in the past, I never even thought that one day we would be wishing we were all together again. I hope your day was filled with family and friends! We were missing ours.