Chadron, Nebraska – The last time we were in Chadron for the wheat harvest was 20 years ago. Our kiddos were much younger. I was pregnant with Callie, and the job I had at that time had nothing to do with spending time in the field (except to haul meals) or the combine. My job was so much different back then. I was in charge of kids, activities, food, laundry and being the “go-fer.”  Little did I know that just four short years later, plans would change. Man… what I wouldn’t give to be able to step back in time and relive one of those days. Those days seemed they would never end because of the needs of the kids, the husband and the hired man. When I see familiar sights in this town, I think back to those days. One of my favorite memories is attending the circus held under the big tent on the east side of town. We went with those same harvest friends (Krumbach Harvesting), whom shared their acres with us this year. They also have four children very close to the same age as our girls. I remember how excited they all were when the elephants made their grand entrance, and I’m certain there was cotton candy involved. 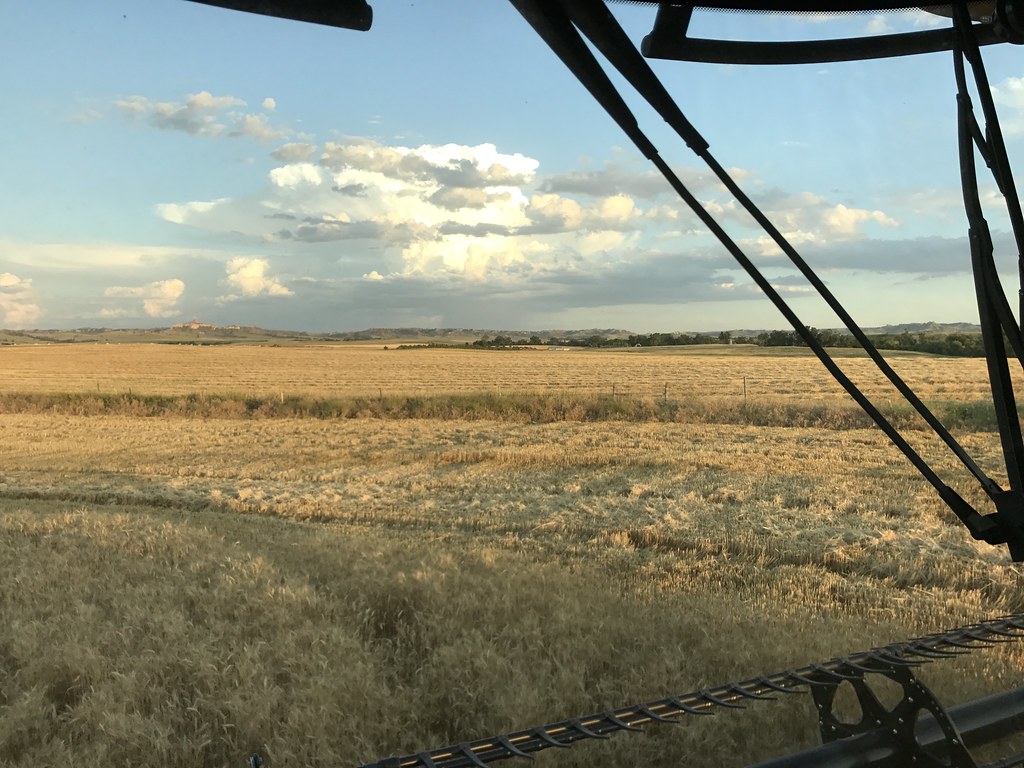 Chadron, Nebraska scenery makes this combine driver feel like she’s on vacation. Who can’t enjoy the view when it looks like this? 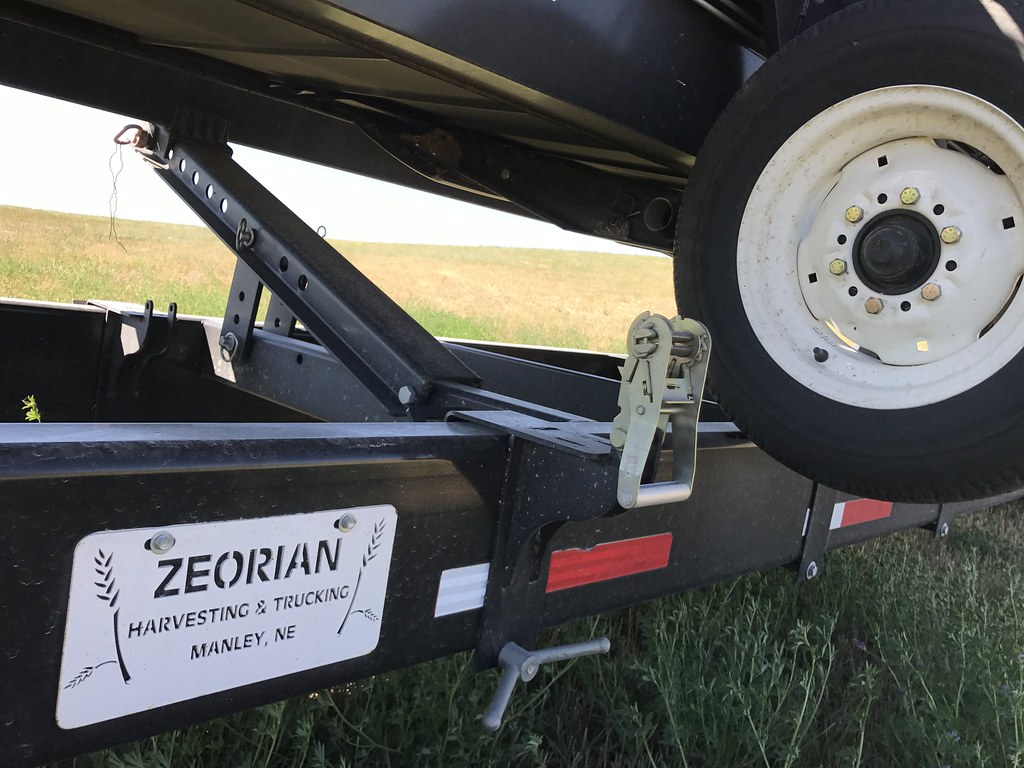 There were about six different smaller fields to move to with this job. The header trailer got a workout here! 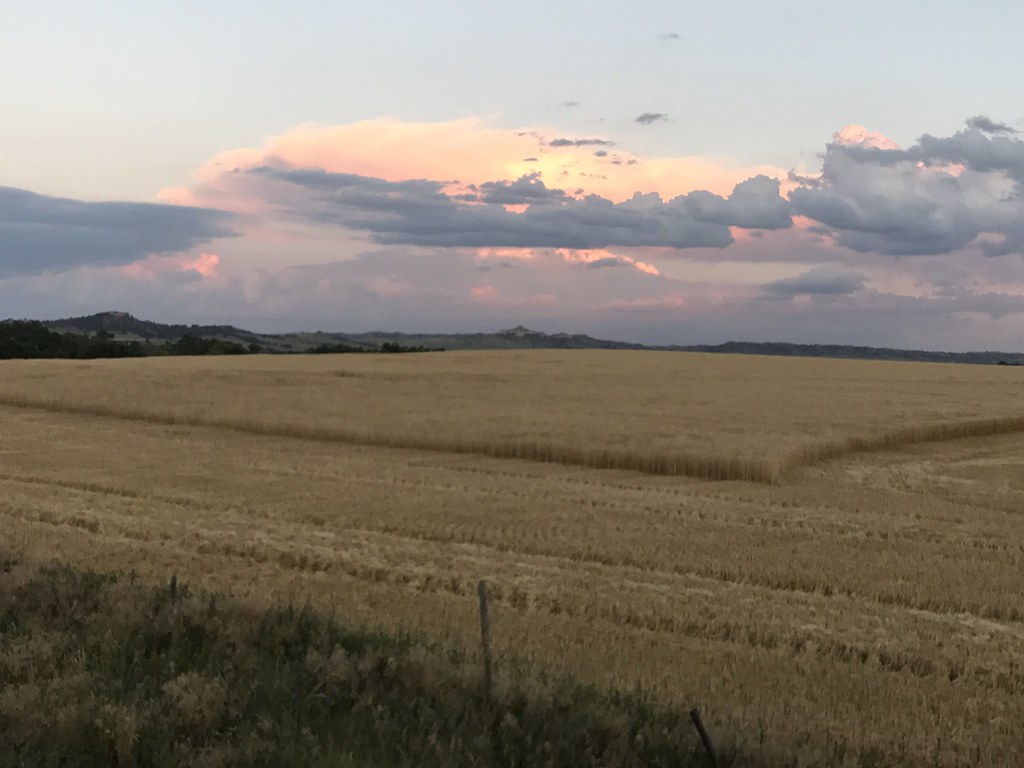 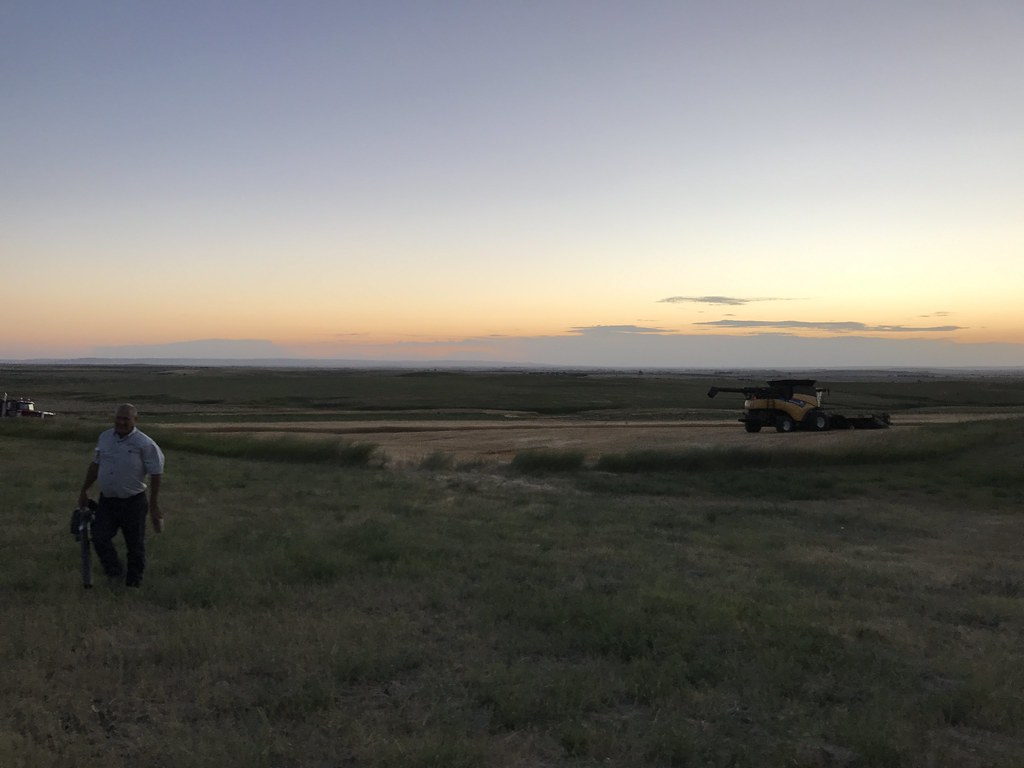 Every night after the combine had dumped the last load of wheat for the day, Jim would grab his ear protectors and leaf blower to clean the dirt and chaff of the day from the machine… just a daily occurrence. 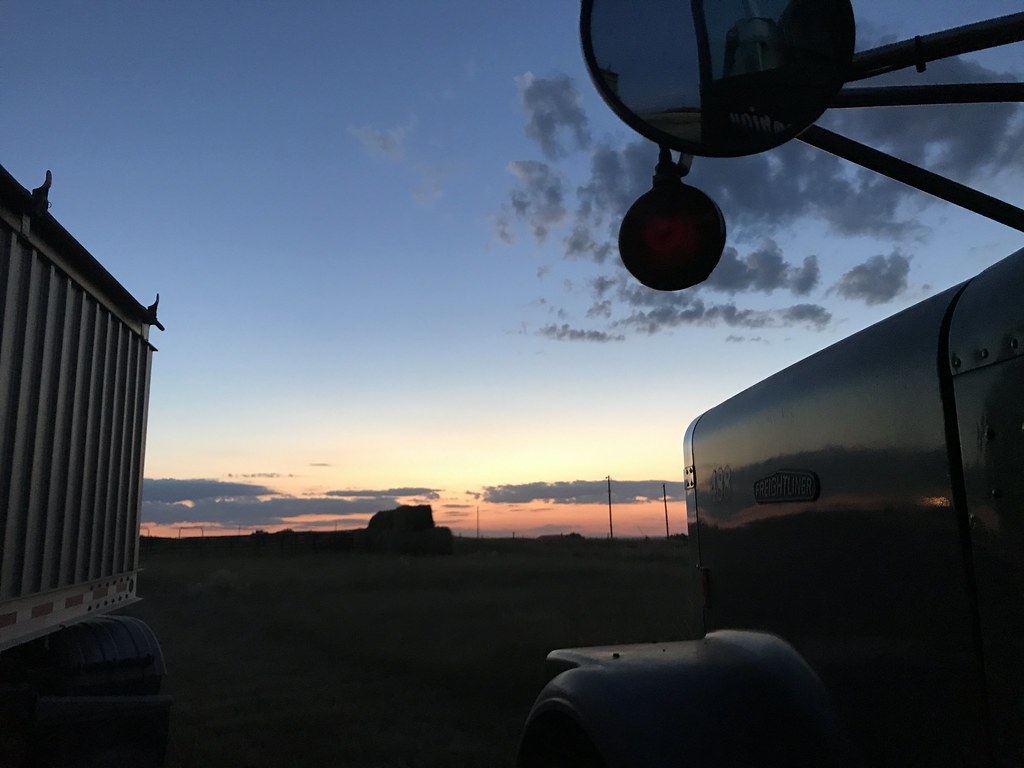 It seems the Beast gets all the glory with the sunsets. This time it was Frank’s turn.

We never made it back to Chadron for the wheat harvest again, until this year… after plans changed. 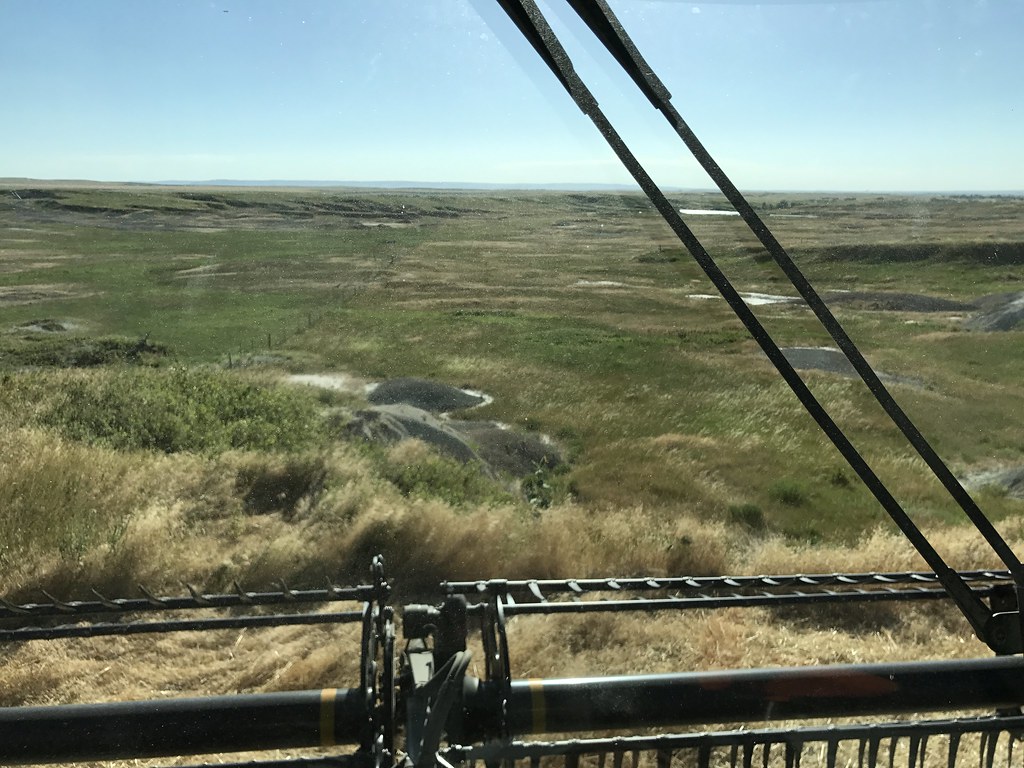 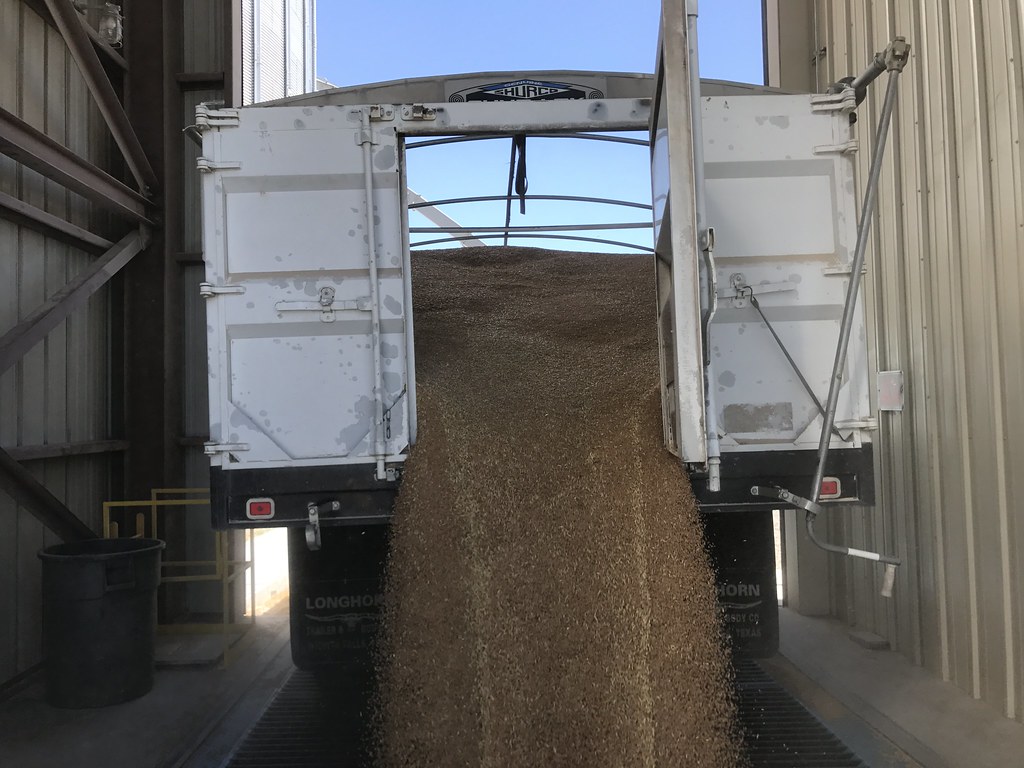 Frank and I were reacquainted when I had to haul several loads to the elevator. I’d never been to an elevator where you have to dump yourself. Maybe it was because they were short-handed. Maybe it’s like that all the time. It just felt weird. 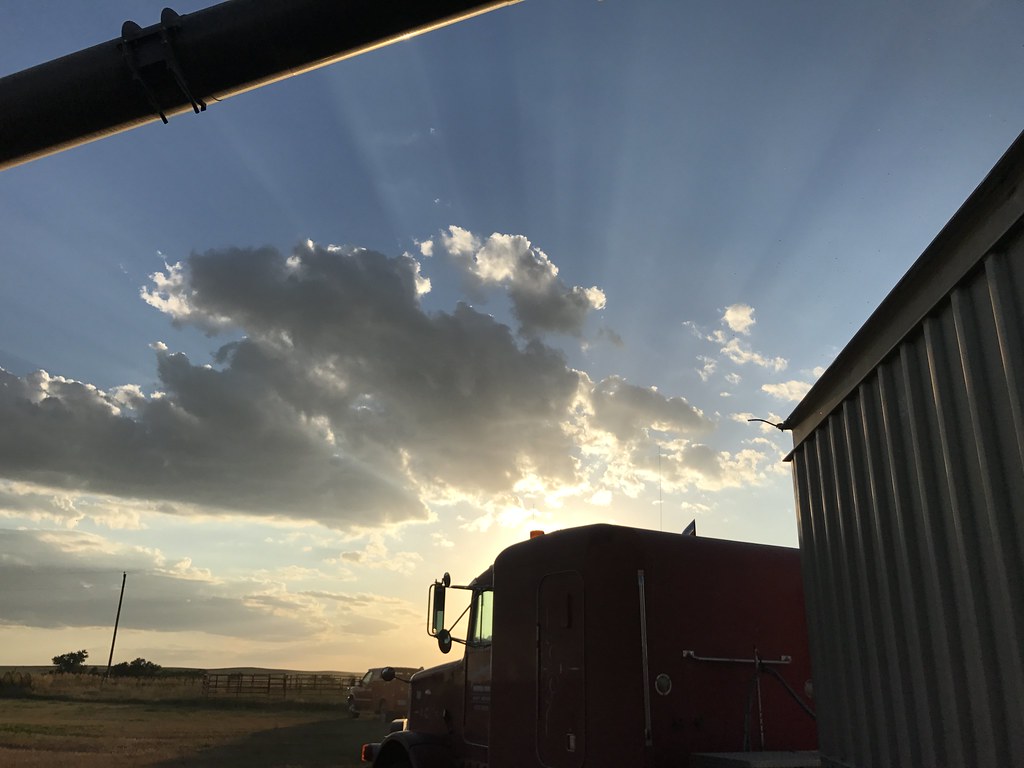 Just too pretty not to take a picture of yet another sunset!

The last 20 acres of wheat harvest 2017 for the Z Crew were cut yesterday afternoon. It was a pretty emotional ending for me – as usual. What began only six short weeks ago (45 days ago, to be exact) was over… done …kaput – just like that! Not the typical 120 days (which also includes 30 days for the millet harvest) that we usually cross off our calendar after we leave home, home. 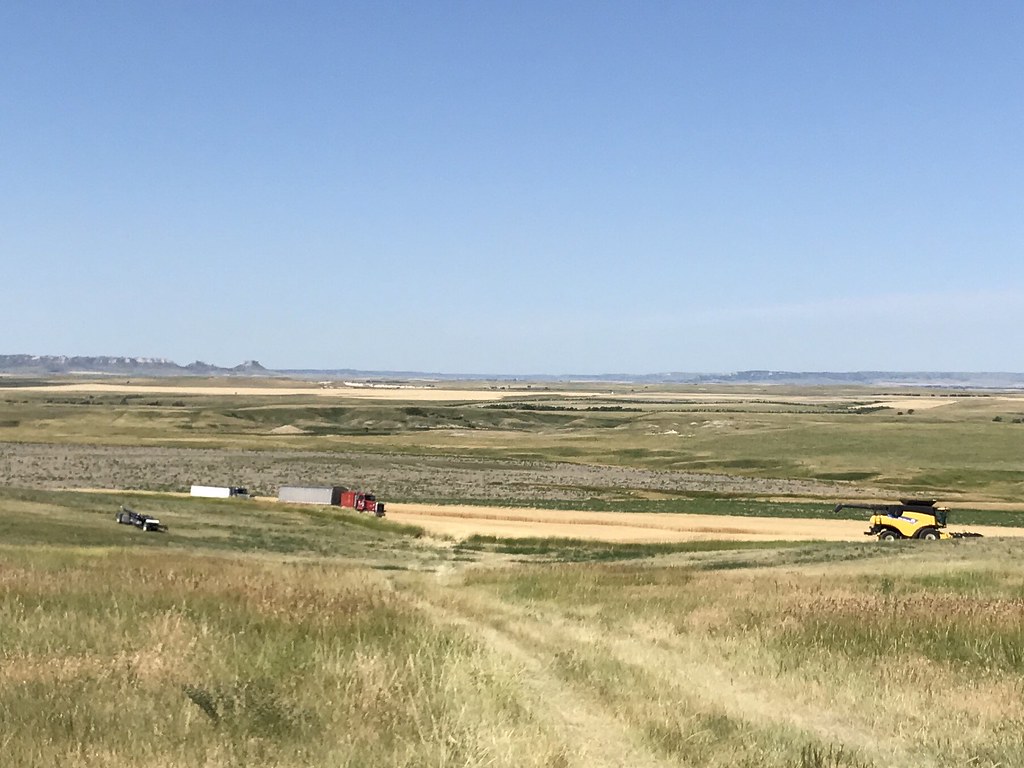 The last morning cutting wheat for 2017. 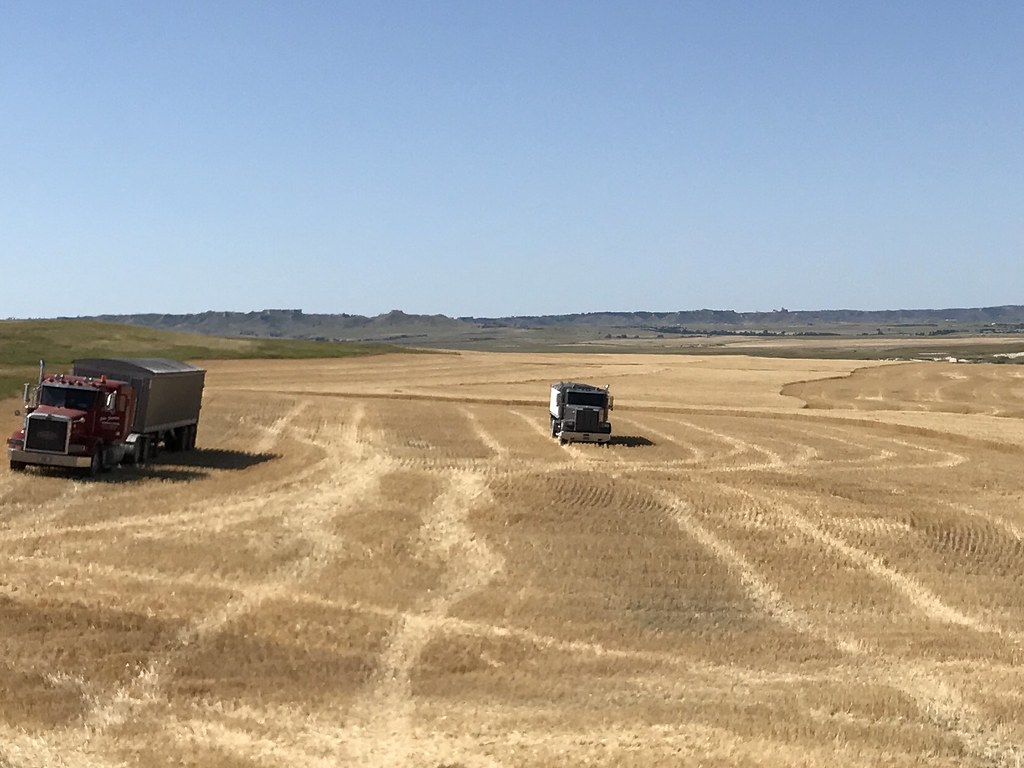 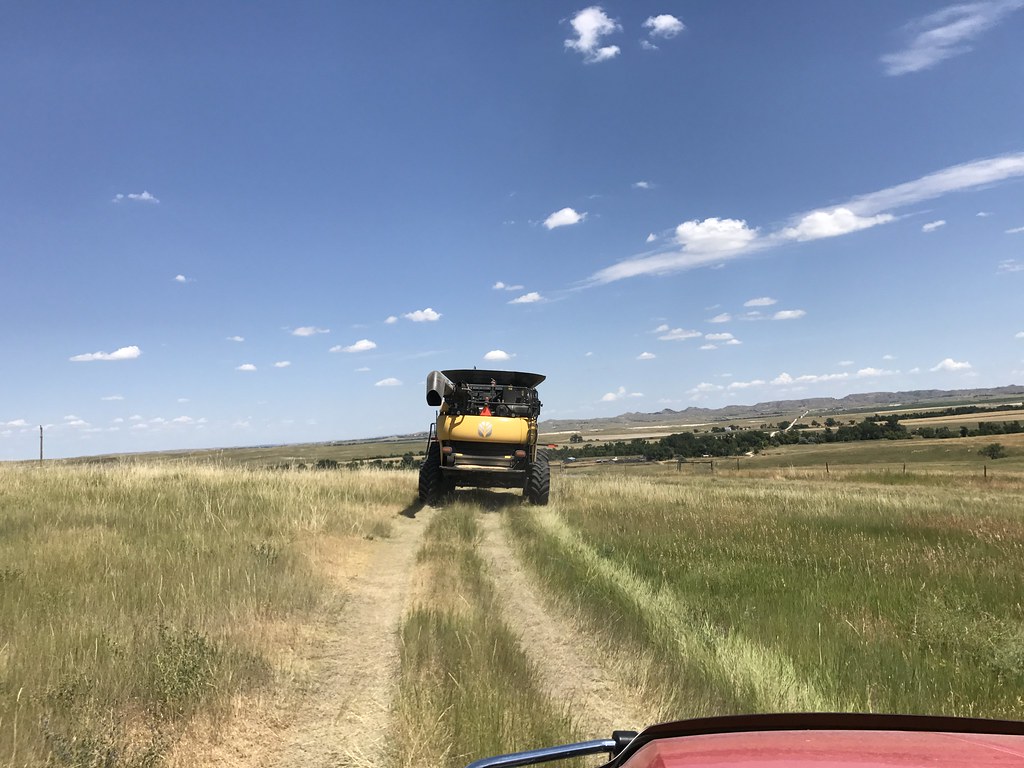 And that’s that! Making our way back to a field to clean the header and combine one more time. 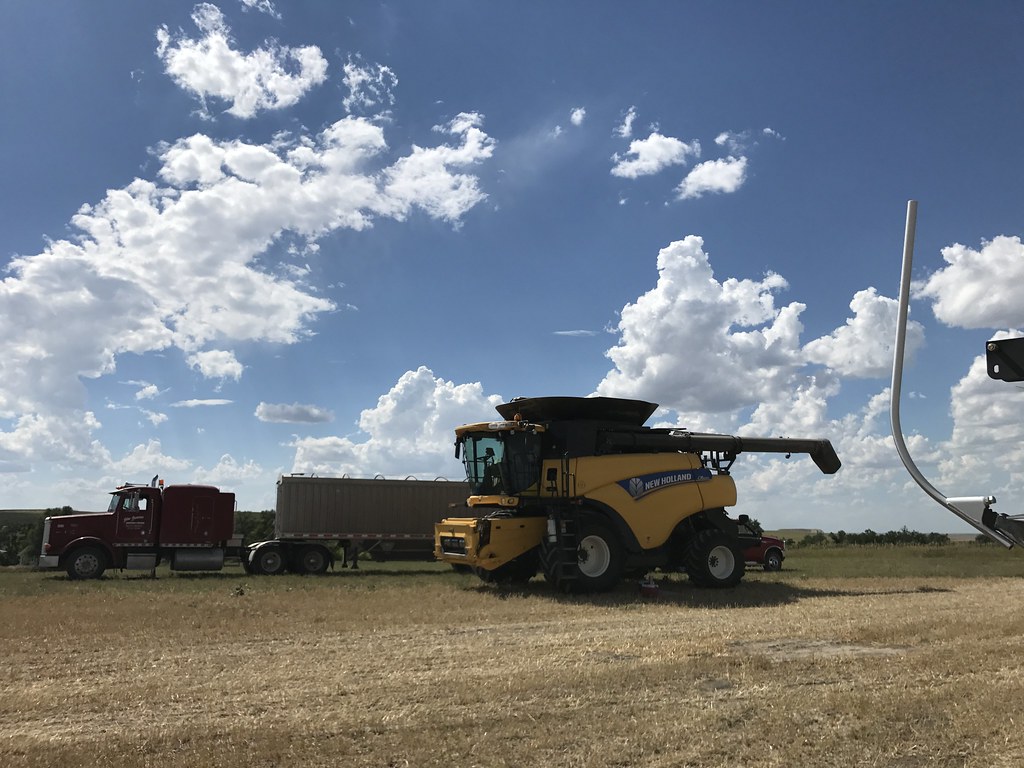 We moved everything from the “western” field to another that would be easier to get to from the road to clean equipment.

I could always count on Grant and Mike (with Kiowa County Media Center) to be riding along with me via the Combine Cam, so when Luke Bryan’s song, “Fast,” came on the radio, I said, “Hey, Grant… this should be the summer’s theme song.” Just about the same time I said it, I received a note from him in all caps, “THAT IS THE SONG OF THE SUMMER.”

Sixty seconds now feels more like thirty
Tick-tock, won’t stop, around it goes
Sand through the glass sure falls in a hurry
And all you keep trying to do is slow it down, soak it in
Keep trying to make the good times last as long as you can
But you can’t, man
It just goes too fast!

Because we don’t usually cut here, I don’t know if the 35 bushel crop we cut is an average or an above average yield for this area. The test weights were good at 62 pounds, but the protein was only 9 percent. The cutting conditions were ideal for cutting wheat but a bit uncomfortable for my truck driver. He had to deal with heat nearing 100 degrees every day with very little wind. One very nice thing about this part of Nebraska is as the sun dips in the western sky, the cool of the night is felt almost immediately. 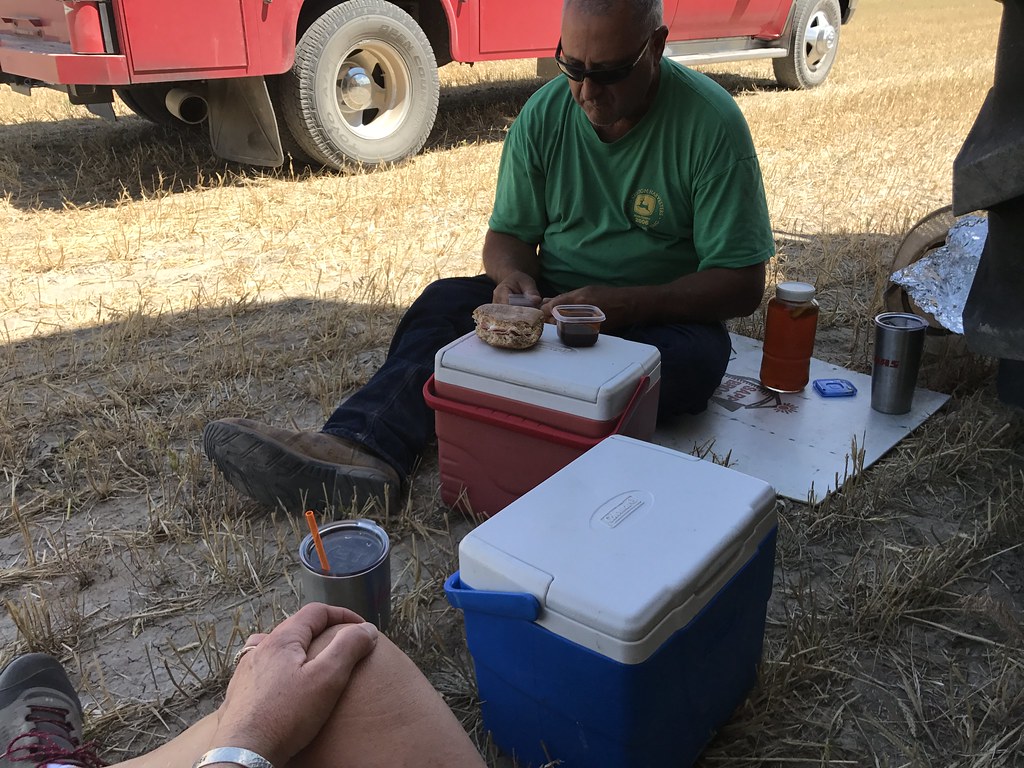 At about 3:00 p.m. that final day, we decided to quit long enough to eat our lunch. When you’re on your own, there are a lot of sandwiches consumed. I told Jim I should have kept track of how many sandwiches we ate. I always made him two – one for lunch and one for supper. It was usually a ham and cheese and a peanut butter and jelly. He told me he always ate the ham and cheese for lunch. As for me, I ate my sandwich early afternoon and then was good with whatever was left in my box for supper. Sometimes, we would eat a bowl of cereal when we came in or if we were really hungry – maybe a hamburger from McDonald’s (if there was one around). 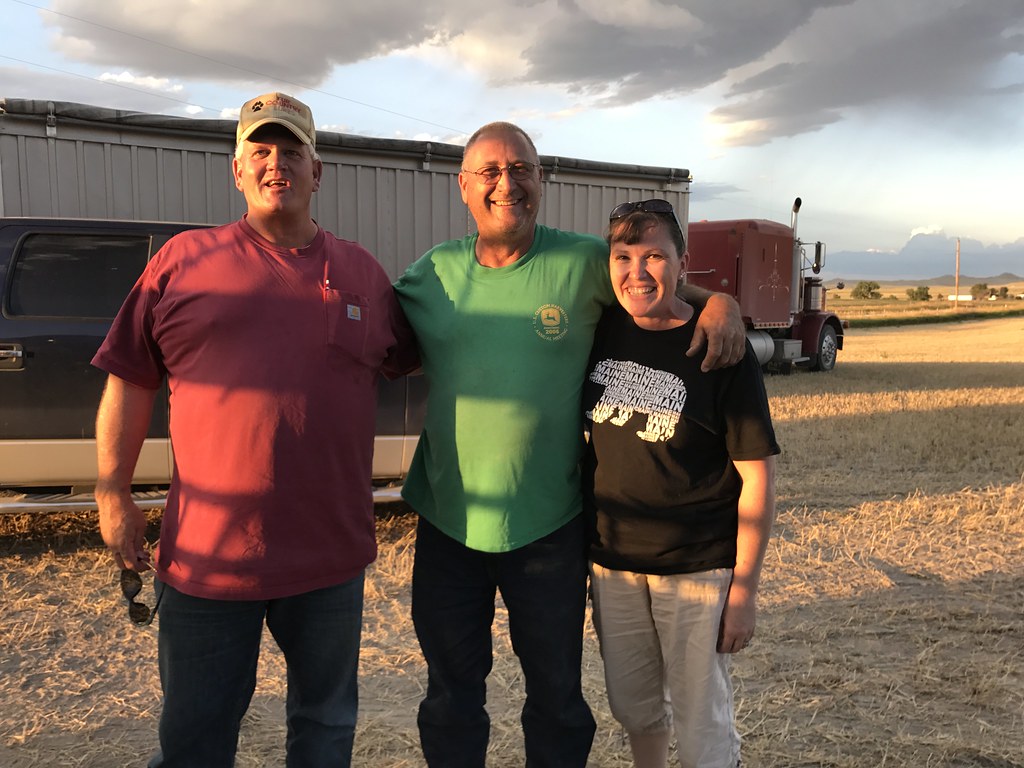 Nicole was 5 years-old when I met her for the first time in 1981. Her dad hired my family (my dad and grandpa) to help cut his 60 bushel wheat in Jordan, Montana. Yields like that just don’t happen every day there! We’ve been friends ever since. John and Nicole now live in Lusk, Wyoming. Times change. Plans change. We used to get to spend every summer with them when we worked in Jordan. Then, they moved to Lusk, and we stopped traveling to Montana to cut wheat. It’s the love of friends that mean the very most to me on this life journey! They drove to Chadron for business and found us out in the field cleaning equipment. They talked us into pizza at Pizza Hut before they headed back west again later that evening.

If you recall, one of the reasons we felt we needed to go home (if we no longer had wheat to cut) was to welcome grandbaby #3. We’re still waiting. Jamie’s due date was July 17. She had a doctor’s appointment that morning, and he said she was nowhere close to having a baby. To make matters worse, he informed her if she didn’t have it before the following Monday… he would be on vacation when she delivered. She’s been doing a whole lot more walking since then!

Our plan for now (until it changes, because it changes nearly every hour this summer) is to leave the equipment parked in Chadron and head for home tomorrow (7/19). We’ll stick around there for 10 days or so, and then head back out to Chadron and move equipment to Colorado. Then what? Jim thought maybe we could take some time and do things we don’t normally do during the summer – like go to the mountains for a few days or go to Montana and visit friends. It doesn’t seem right to think about going home, home while watching so many combines heading north. I’m not sure where they’re going… they’re just going and going in hopes of finding something to do to keep them busy – something that will help pay the bills. But all that movement also means expenses, and that could be a very expensive vacation. I honestly wish them all the luck in the world, because I will never discourage hope and perseverance! I just hope I don’t see any loaded combines headed west while I’m headed east. It could be a long drive home! 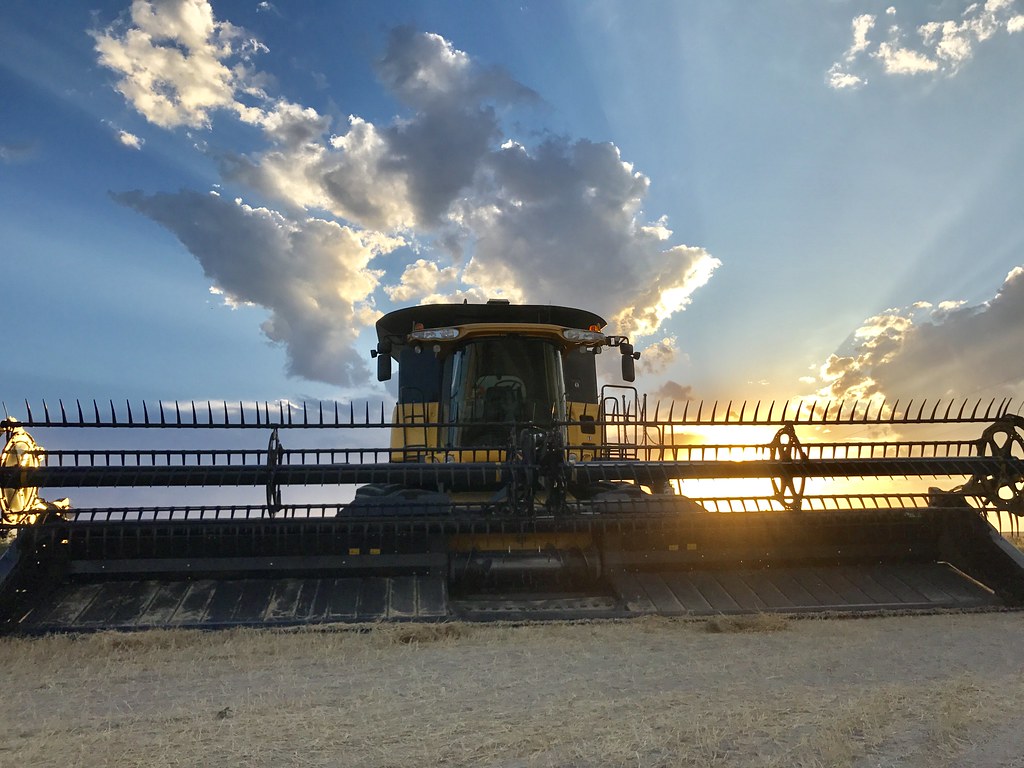