All Aboard Harvest | Laura: The middle of somewhere
14947
post-template-default,single,single-post,postid-14947,single-format-standard,qode-quick-links-1.0,ajax_fade,page_not_loaded,,qode-title-hidden,qode-theme-ver-11.2,qode-theme-bridge,wpb-js-composer js-comp-ver-5.4.7,vc_responsive

22 Jul Laura: The middle of somewhere

Eastern Colorado – Due to a lack of urban centers, I’m guessing a lot of people would deem where we’re currently cutting the middle of nowhere. It is true we are miles and miles from the nearest village or town, but despite all that, “I” would say we’re in the middle of somewhere. That somewhere is beautiful. Brave little houses and farmsteads dot the landscape — those few still willing to take on the unpredictable windswept prairie. Signs of days gone by are here too. I see the abandoned one-room school house and the occasional forgotten skeleton of a house that was once a happy home. Who were these people that once inhabited these spots, and what became of them? Song birds flutter on the breeze. The swish-swish of wheat and grass can be heard, and in the words of Louis Lamar, “The wind, always the wind.” Cattle peacefully chew the grass. And the view… one can see for miles.

It’s out here that there are few distractions. One can think out here, breathe out here, and just be. Sometimes I wonder how I got so lucky that I am to see these places that most rarely, if ever do. I have to think that a lot of the world’s problems could be overcome if we just took a little R&R on the prairie to clear the air in our souls and minds.

It was out here in the “middle of somewhere” that we had our epic picnic. There were several storms in the area, and initially it looked like it just might miss us. The rain danced in the distance all the while creeping ever closer.  As luck would have it, I arrived at the the field just in time to watch it let lose. Combines had dumped, trucks and cart were tarped, and machines flew in from the field.  The storm brought a temperature change and that rain was ice cold!

It was decided, since it was a ways back to town (understatement), and the food wasn’t getting any warmer, we would just drive out of the storm and eat in the country.  I don’t know why that moment was so neat to me but it was. We drove several miles in the opposite direction, parked on the side of the road, and I dished out our spaghetti lunch.  It was no one but us for miles and almost like our own private dinner and movie show watching the storm creep ever closer.  All too soon as we were finishing up as the temperature changed and the rain started.

The whole time, the refrain of a song sung by Dwight Yoakum that was popular when I was a kid, kept floating in my head.

Time stood still just for a minute while I watched that storm roll in and ate my still warm spaghetti. No, on this rainy Saturday, there’s no (other) place I want to be. 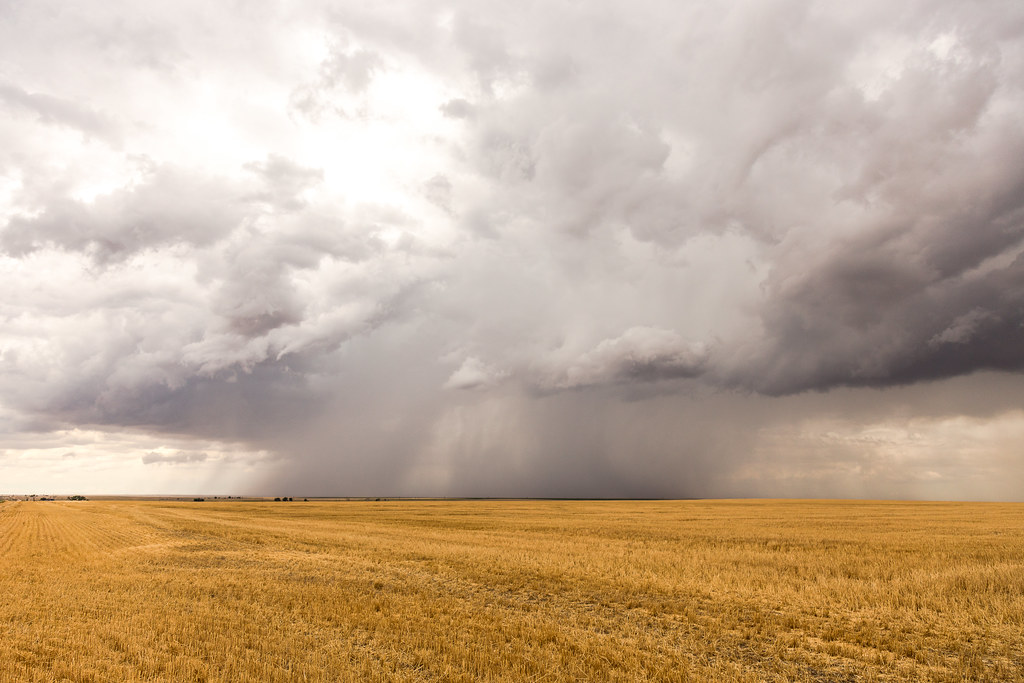 The showers didn’t look very deep at this point. 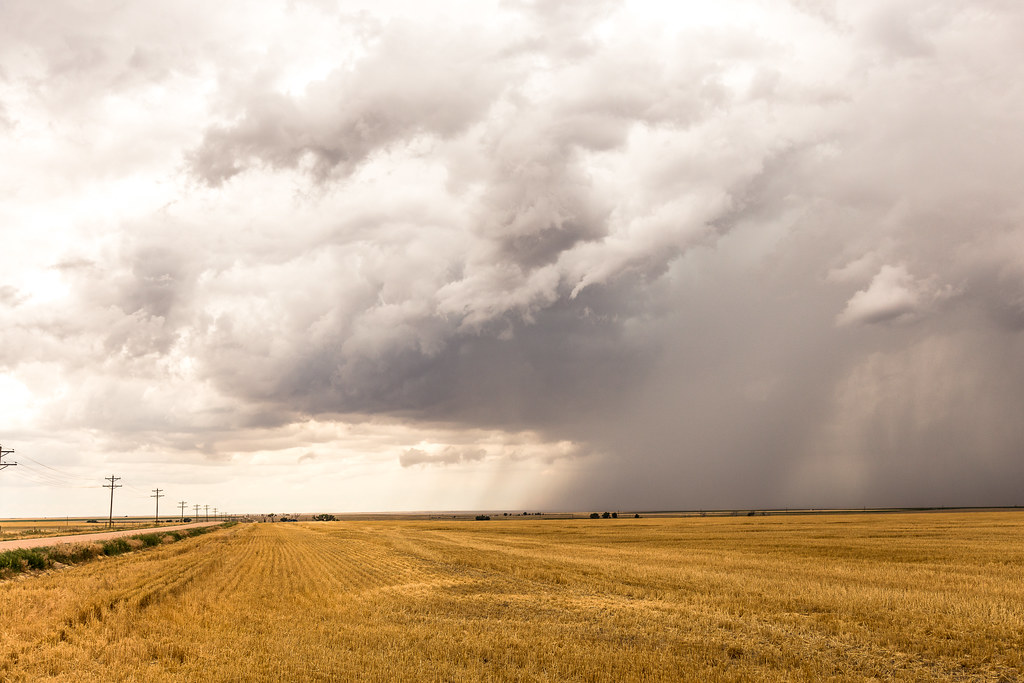 Another view of the storm. 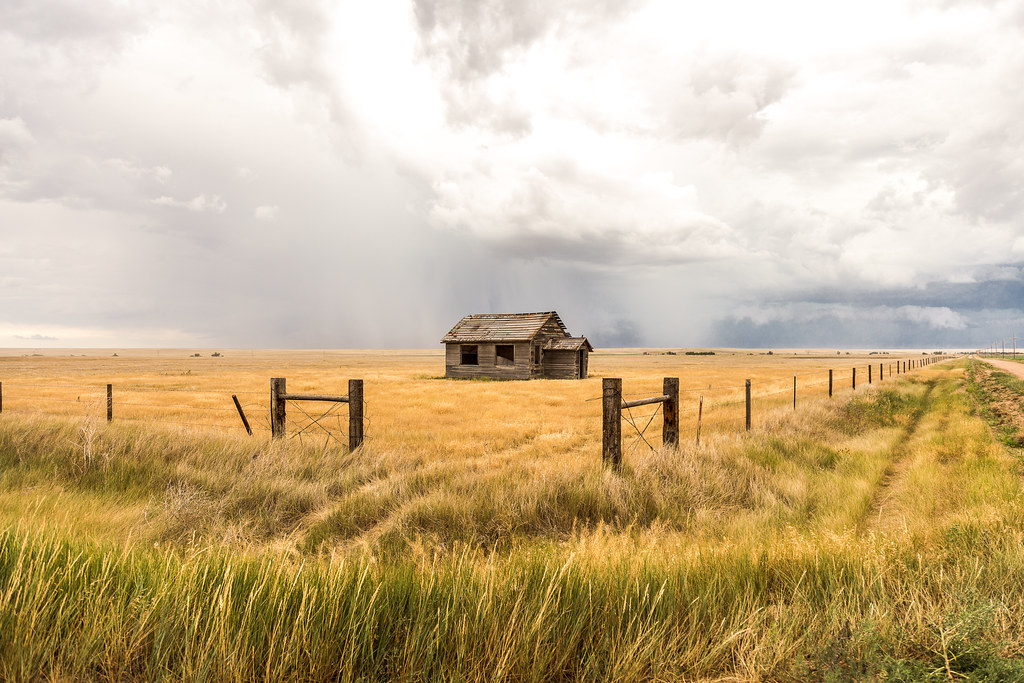 I loved this old school house with the storm in the background. 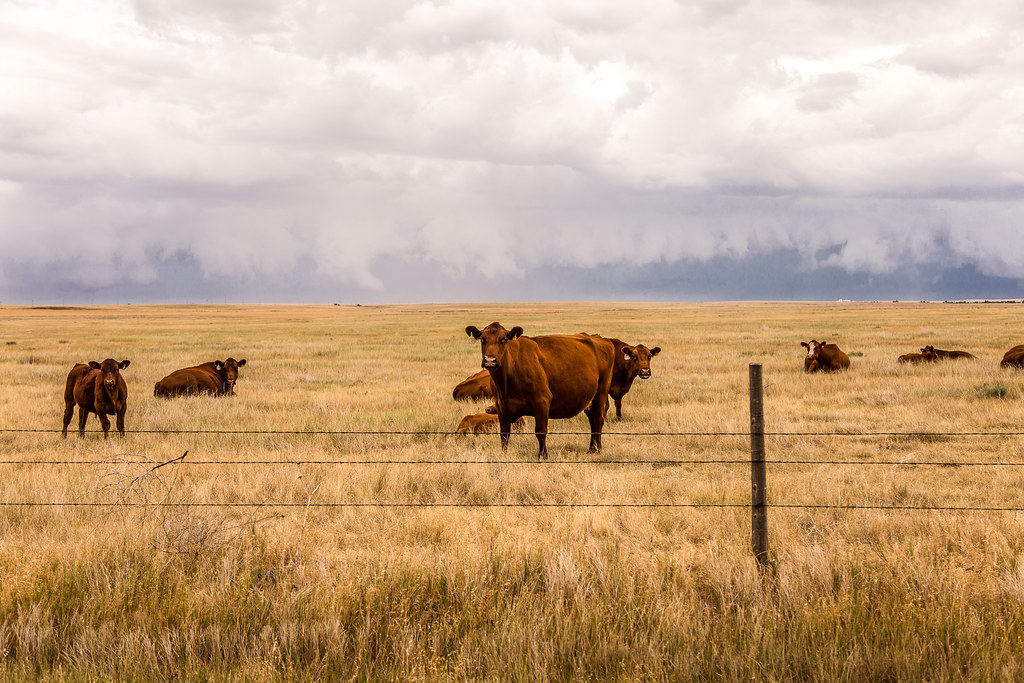 The cows were much more intrigued by me than the approaching storm. 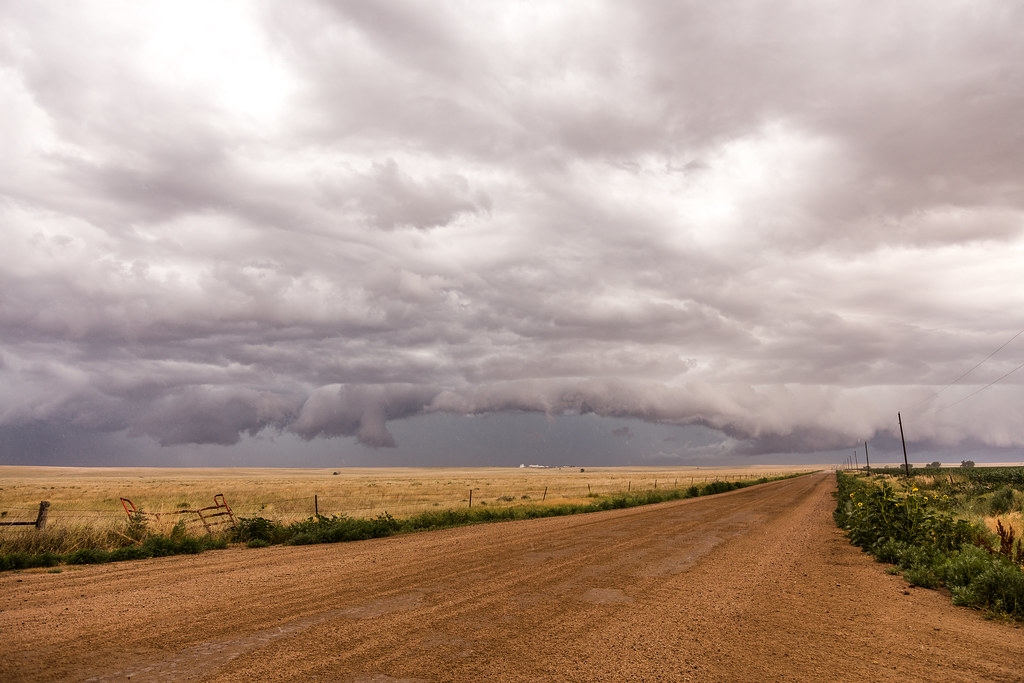 The cloud formations were just fascinating.  But as a former science teacher, I’m easily amused! 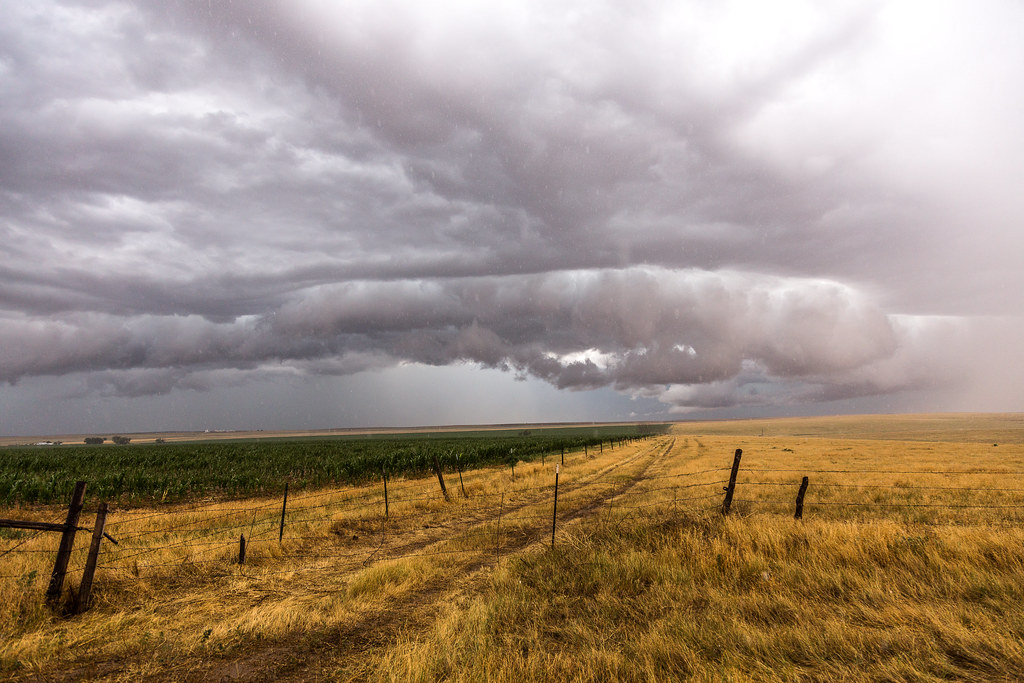 I hopped out to catch this just as the rain started.  The rain and air temperature was freezing cold!  The wind really picked up too.  You can see the grass bending in the breeze. 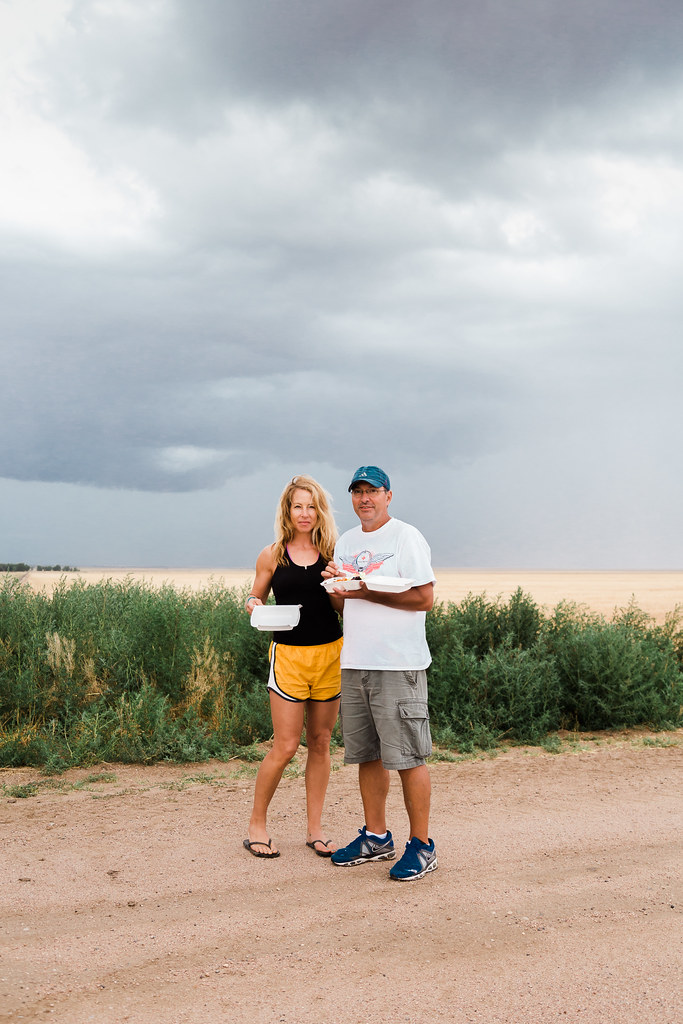 Glad our family got to spend some time with us on the road. 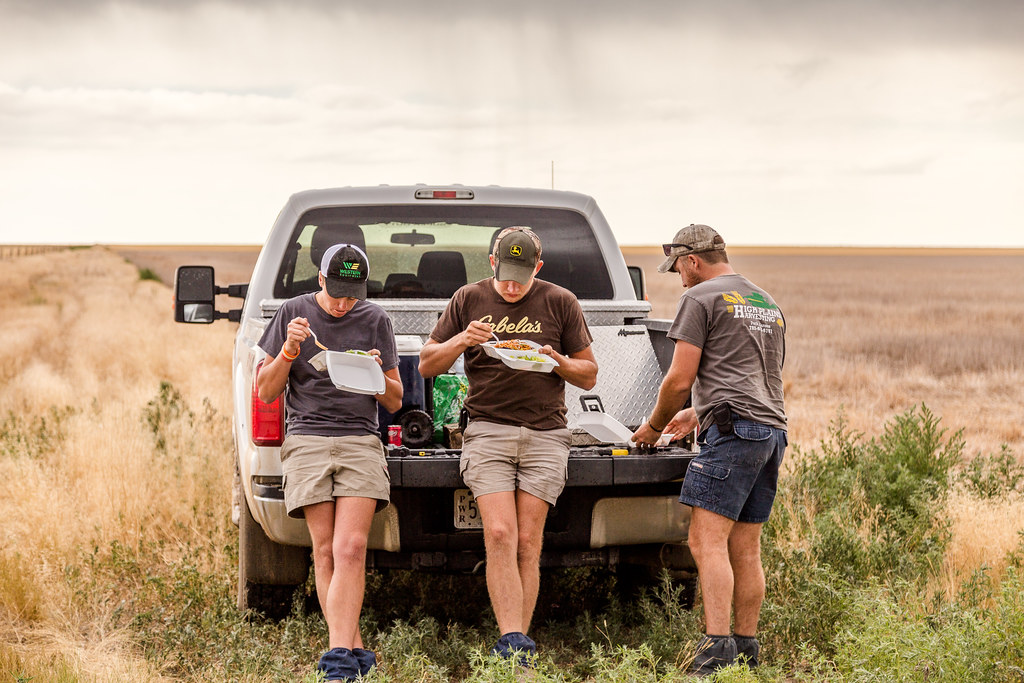 Love the rain dancing behind the crew in this photo.