All Aboard Harvest | Tracy: “Second Verse, Same as the First”
16235
post-template-default,single,single-post,postid-16235,single-format-standard,qode-quick-links-1.0,ajax_fade,page_not_loaded,,qode-theme-ver-11.2,qode-theme-bridge,wpb-js-composer js-comp-ver-5.4.7,vc_responsive 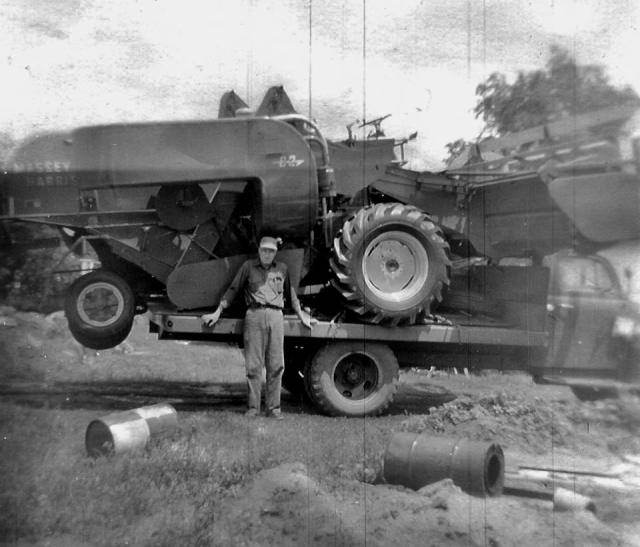 31 May Tracy: “Second Verse, Same as the First”

Manley, Nebraska – Do you know how difficult it is to write an introductory blog when you feel like you’re saying the same old thing? Sort of like “second verse, same as the first”! 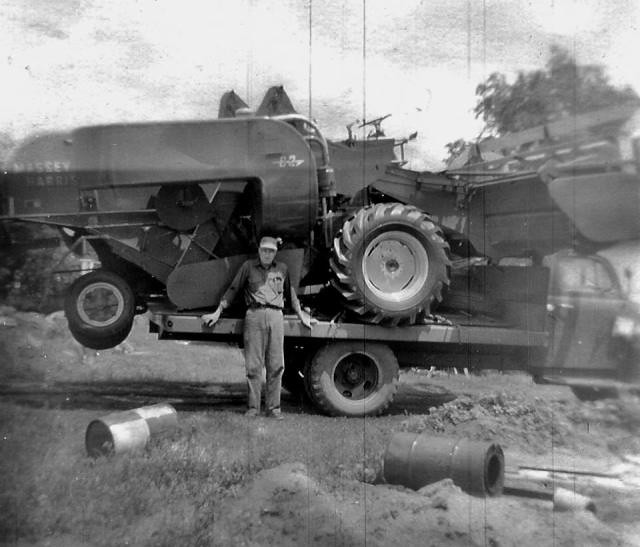 How do you NOT tell the same old story when it’s your story? When it’s who you are and how past events led you to where you are right now? I guess I could fabricate some sort of wild tale but then that wouldn’t be who I am. 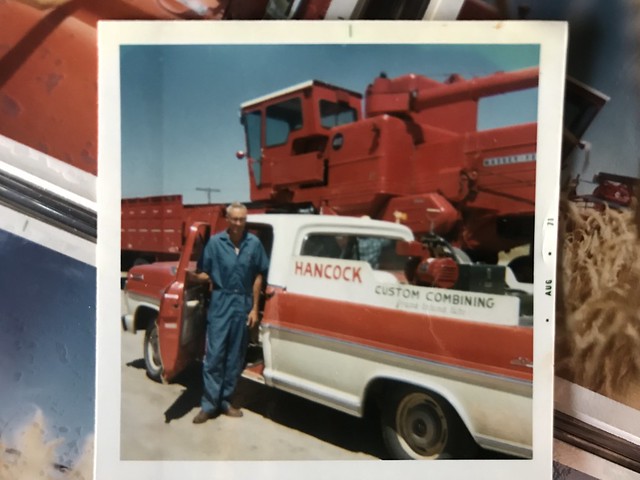 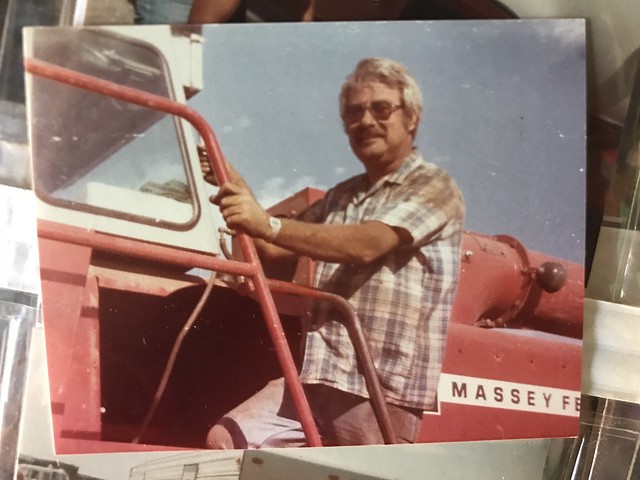 This is my dad, Larry Hancock. I’m going to guess this picture was taken in 1977. 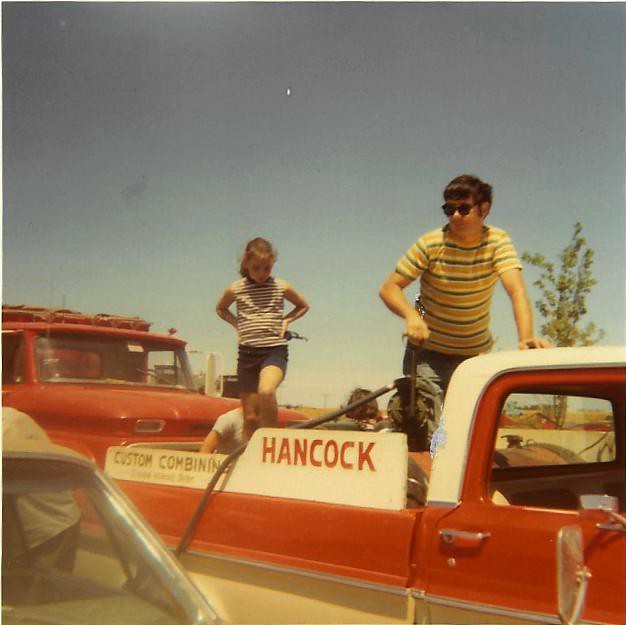 Just me and my dad in the wheat field. Looks like he must be pumping gas into a vehicle. (1971) 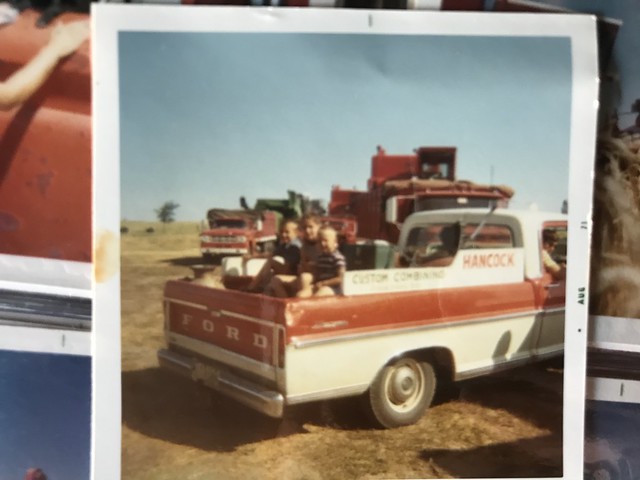 I have been asked to speak about custom harvesting which led to the creation of a power point presentation. I bring this up because it gave me an excuse to actually visit with my dad about the “beginnings” of this lifestyle for our family. To me, it’s just a job. It’s what we’ve done, as a family business, since 1951. The one person I wish I could talk to is my grandpa. He and Grandma used to tell tales of the harvest all the time – back when it didn’t matter to me.

In 1929, at the age of 17, Grandpa (Elvin Hancock) and his brother used their Rumely pull type combine (pulled with a Farmall Tractor) to begin custom harvesting for local Kansas farmers. That’s grandpa on the tractor! 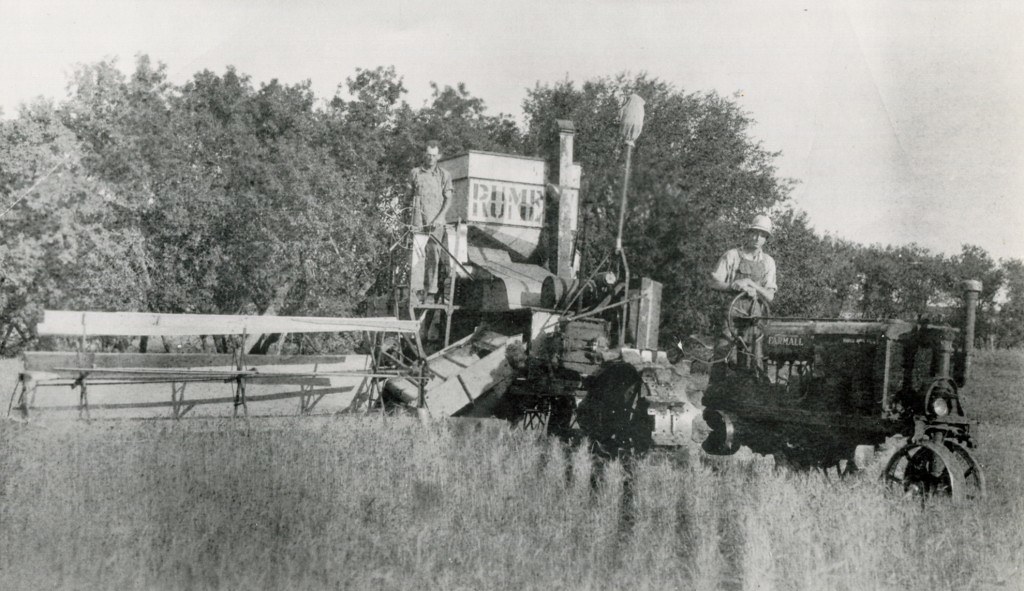 Grandpa and his brother on their pull type combine. That’s grandpa on the tractor – age 17.

Grandpa hit the open roads with his combine in 1951. It wasn’t until the summer of 1957 that my dad entered the picture. He had all kinds of stories to tell me about what the harvest was like for him. They didn’t have the luxury of a 40 foot trailer house with all the amenities of home. They either slept in the truck box (filled with wheat) or under the truck. He recalled one rainy day when they spent the entire day under the truck. There were no cabs on the combines. So most days began with prying open matted shut eyes due to the dirt and chaff from the previous day. And showers were a luxury when returning to camp after a long day. If the line was too long, they would often opt to jump in the river. 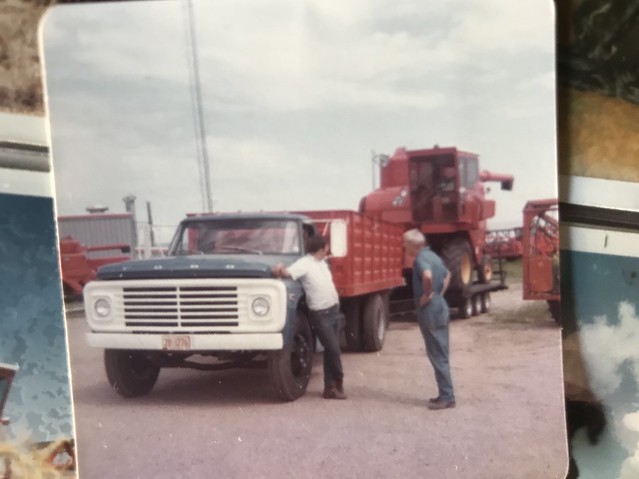 That’s Grandpa with his hands on his hips – a stance you could see him in often. And those coveralls…they were his uniform til he died. The only time I saw him wearing anything different was if he was dressed up in a suit. It looks like he may be talking to my dad. Not sure what year. 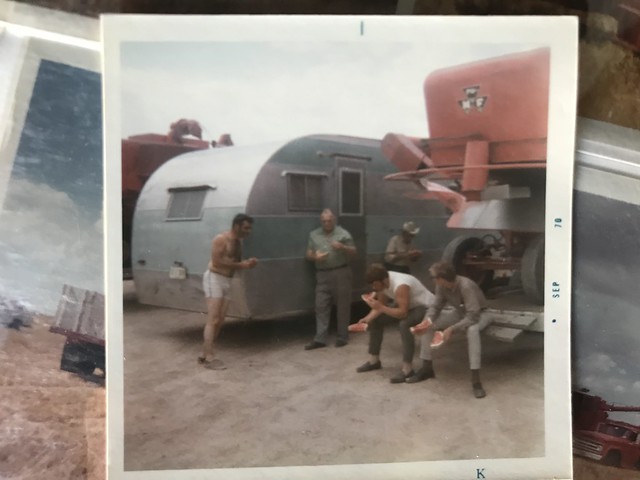 Hancock Custom Combining crew in 1970. Looks like they must be enjoying a little watermelon while parked in a lot. 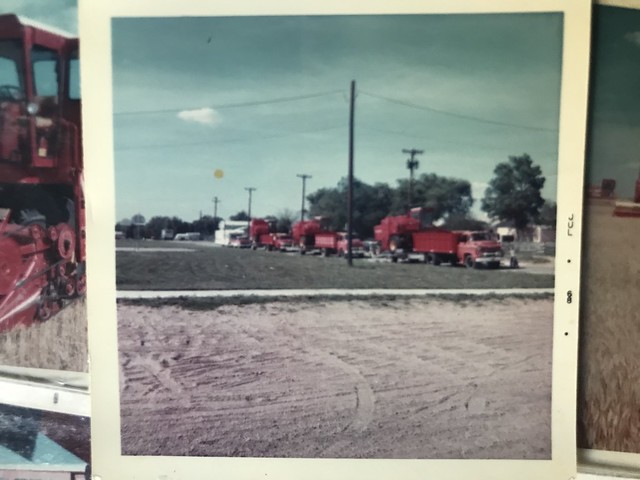 Hancock Custom Combining – not sure what year. 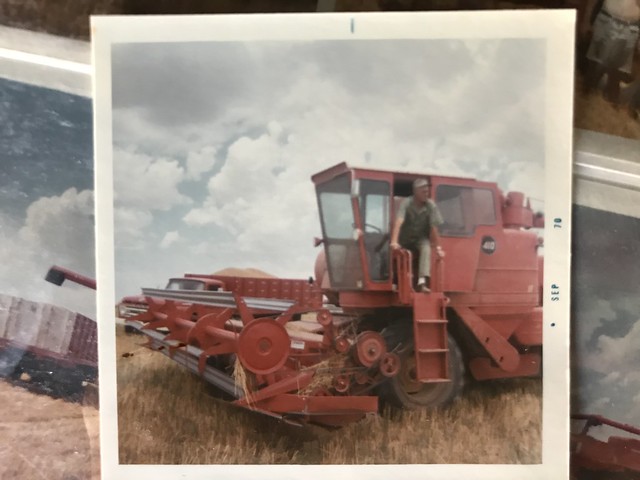 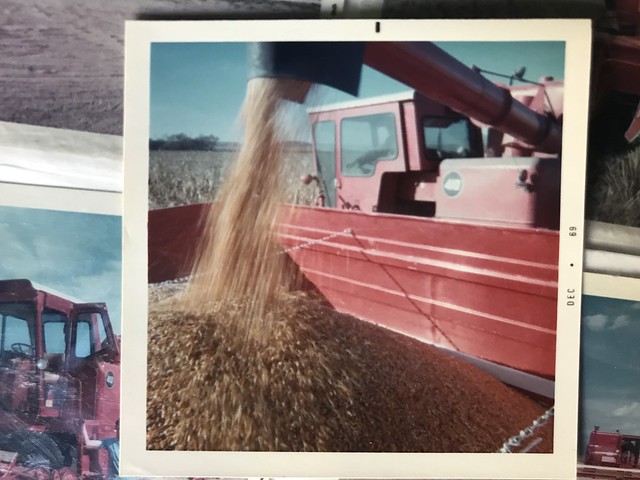 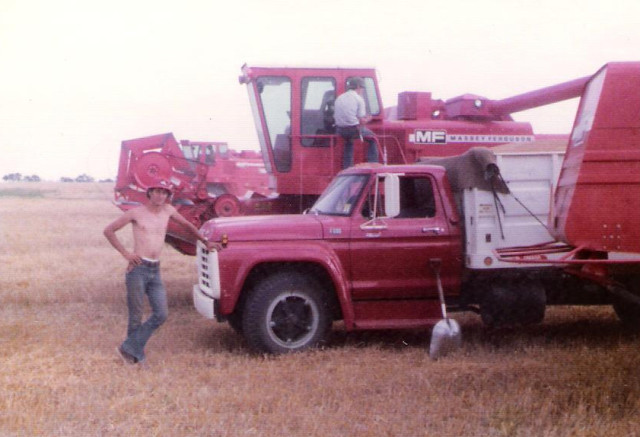 That’s the guy I fell in love with! This would have been his first summer as a hired hand for my grandparents – 1975.

After raising four amazing daughters while on this journey, we’re now back down to just the two of us. I typically run the combine while Jim drives truck. We eat lots of sandwiches and sometimes just have a bowl of cereal after we get in at night.  #whateverittakes

In 2009, Jenna was chosen as one of two of the first All Aboard Wheat Harvest correspondents. We’ve been telling the story of the custom harvester through our eyes and our crew ever since. After Jenna had to grow up and move on, the baton was passed to Taylor. And when Taylor also had to grow up and quit following the trails with us, the baton was placed in my hands. This marks the tenth year of story telling for the Z Crew. WOW…how time does fly! You’ve been with us through growing pains, graduations, weddings, babies and all the challenges of being on the road with the wheat harvest.

This summer is setting up to be a bit of a challenge due to weather and other circumstances. We thought last year was tough…but this one could be even more interesting. I believe God has a plan! 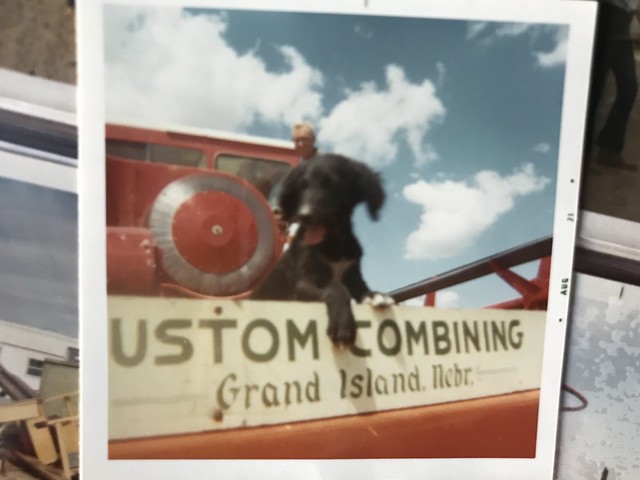 George was like no other dog I’ve met! He was definitely a field dog. He LOVED to ride in the combine. He’d climb straight up the ladder to get in the cab. And was a bunny chaser! That’s Grandpa in the background. 1971 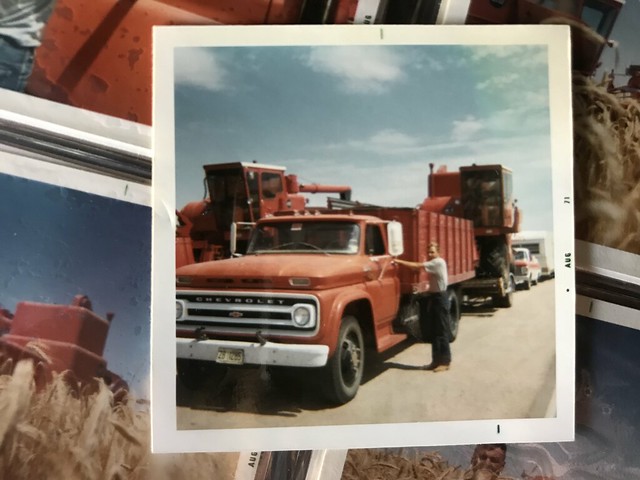 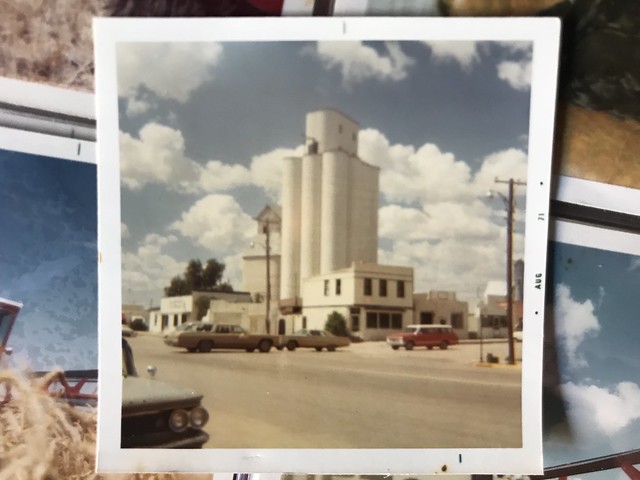 Maybe you’ll recognize where this elevator is. I don’t have a clue which one it might be – any one of them from Oklahoma to the Canadian border. 1971 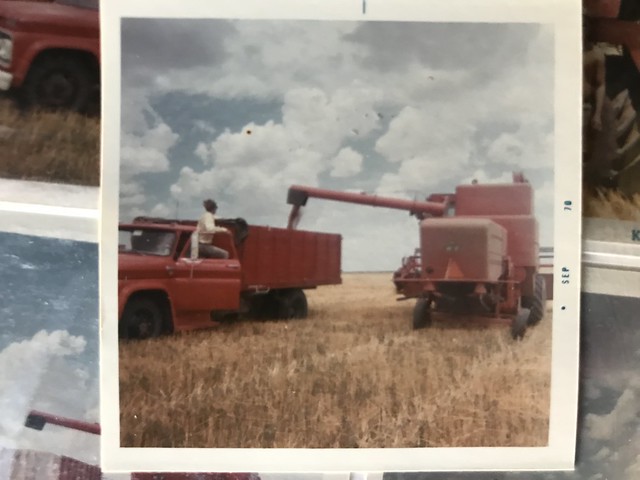 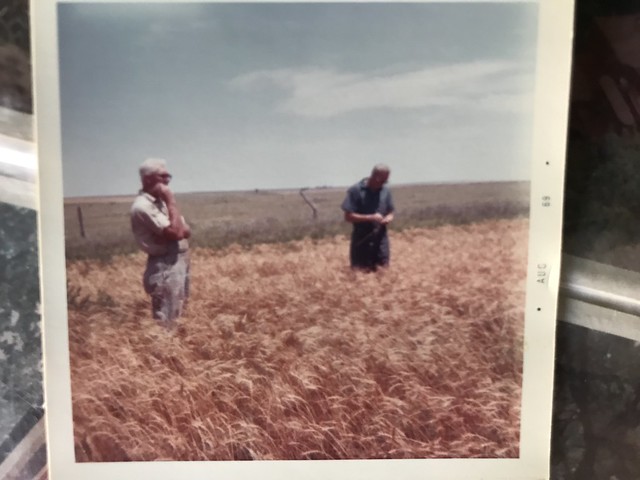 Grandpa and his Dacoma, Oklahoma farmer – Eldon Berry. This picture was taken in 1969. I don’t know when he began cutting for him but he was still working for him in the late 1980’s. 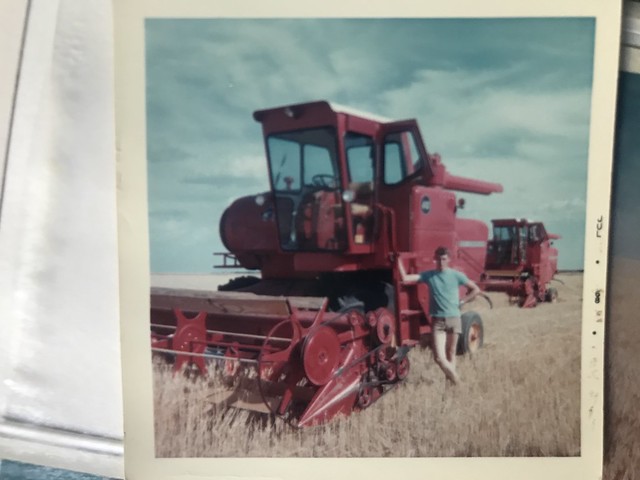 Not sure what year this was taken and not sure who it is. I’m guessing a hired hand. Maybe someone will recognize it and can tell me. 🙂