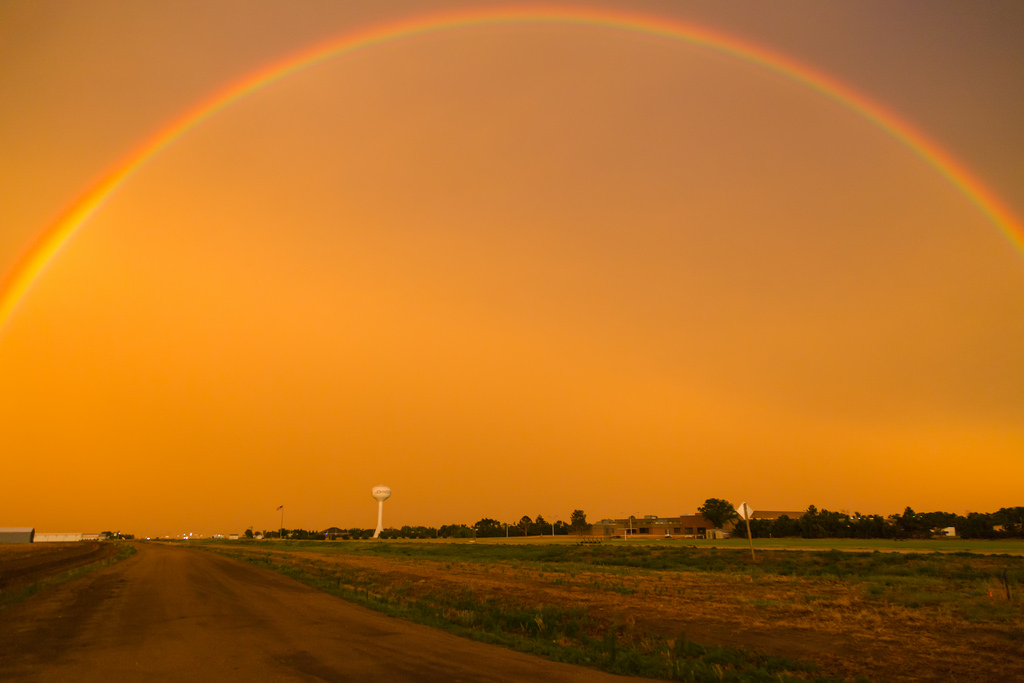 Southeast Colorado – This will be the crew’s second day back in the field after some delay from the storms that moved through recently. The cycle started about a week ago yesterday. While a tornado warning drove part of the crew out of the field, the other part was able to keep cutting up in southeastern Colorado for a few more hours. They were then met with what I’ll call a “good old-fashioned thunderstorm” with wind and rain. Ryan said the cloud looked like the mothership coming in. I don’t know why we describe it like that but, we do, and it is what that type of low cloud looks like! Another crew member from the UK described it as looking apocalyptic! The ground stayed firm, and they were back in the field without much delay the following day.

Storms were in an out of the area and Friday they had a great day for cutting when another tornado warning hit. They could see the bad weather, but were able to keep cutting, until unfortunately the storm damaged the electric system somewhere up the line, which shut power down at the grain facility, which shut us down. Over the weekend, they eventually ran into some wet wheat after the storms and couldn’t get the moisture to drop under 14.

In this arid part of the world, it’s hard to get upset about rain, even at harvest, but some of it came at a great cost. We heard from a farmer around the Colby area that they had lost a large percentage of wheat just days before harvest.  Heart breaking. News from our next stop, which happens to be our home base in Sheridan County, Kansas, was not much better. Wheat acres AND fall crop suffered some heavy damage in the latest round of storms. A friend reported broken windows and holes in their siding at their home in addition to the severe crop damage. We thought maybe we had escaped some of the damage on our farm, only to learn that is not likely the case, though we haven’t seen it in person yet. Nevertheless, with what we saw in pictures, we are now in line for a visit from the insurance adjuster and will soon learn our fate. Who needs to go to Vegas when you can roll the proverbial dice with harvesting and farming? Sigh. Its all part of the game I suppose. What can you do besides control what you can control, pray for what you can’t, and hope for the best? 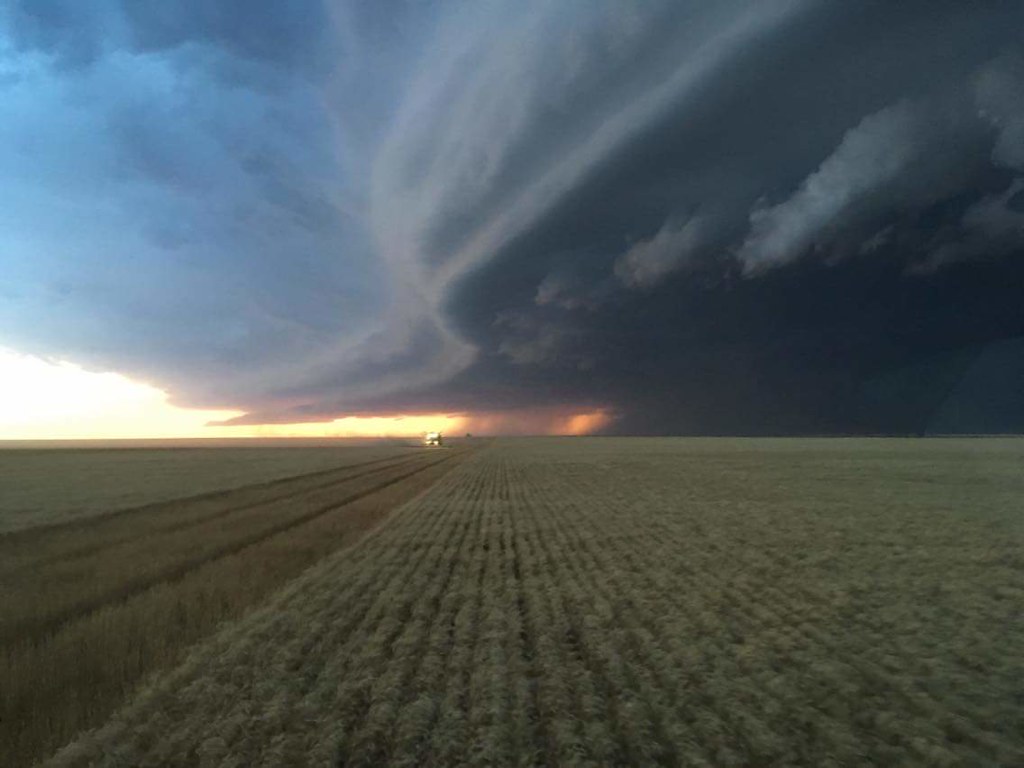 Adam sent in this awesome shot. He said, “It felt like one of those apocalypse movies!” (Photo credit: Adam) 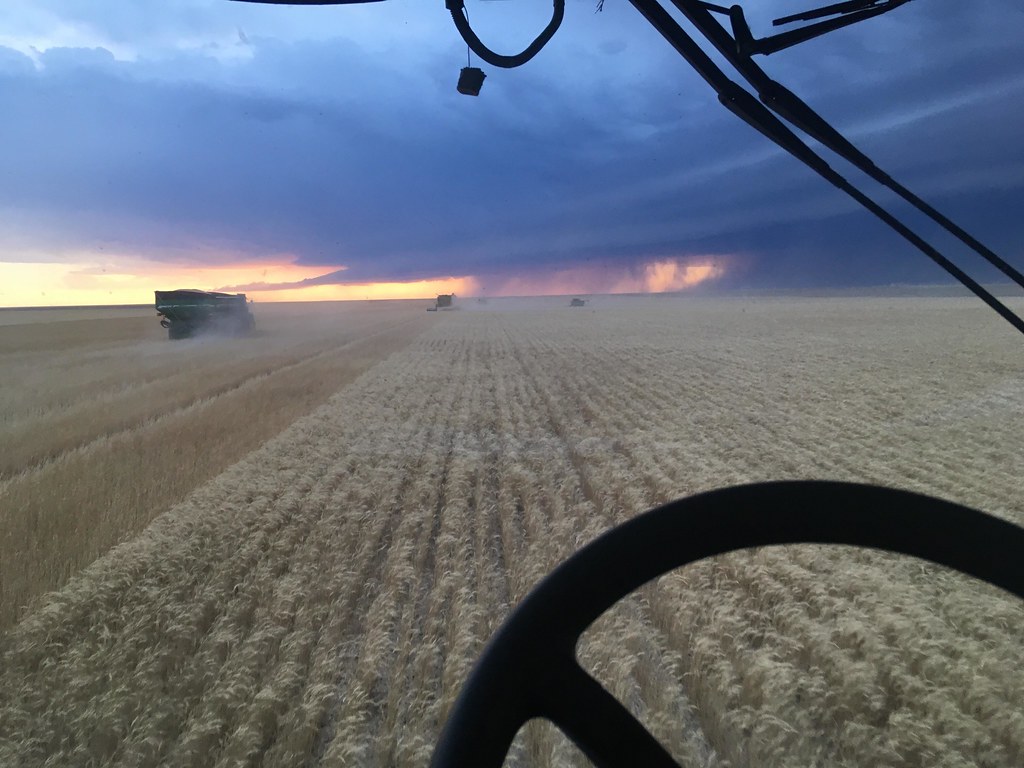 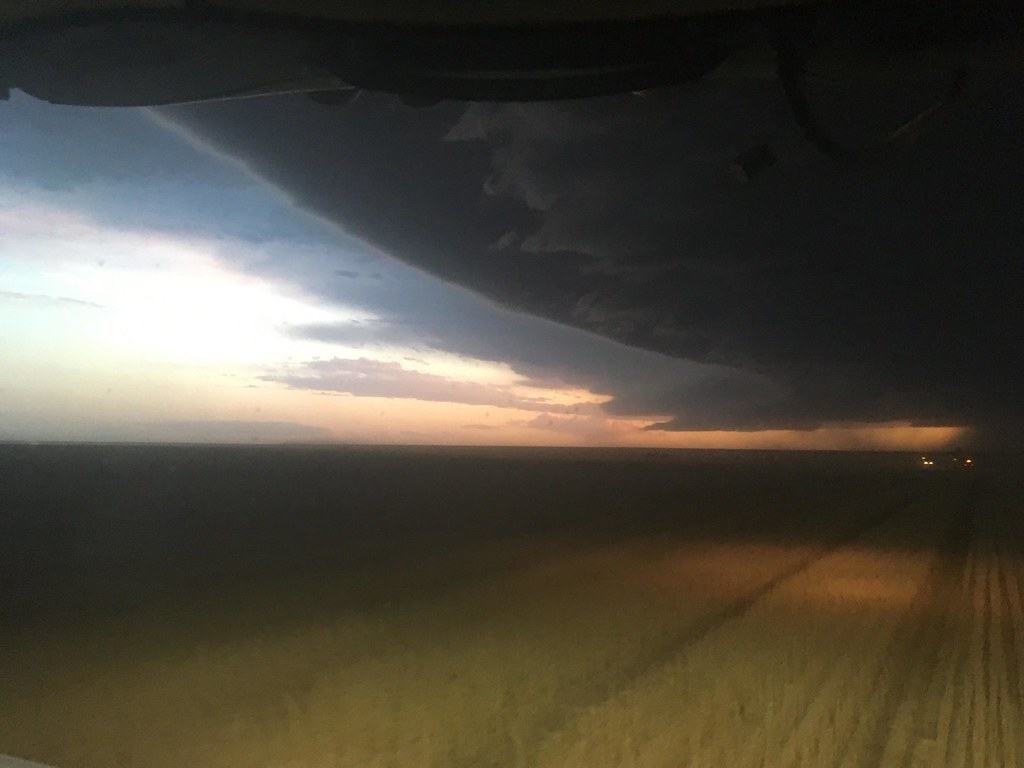 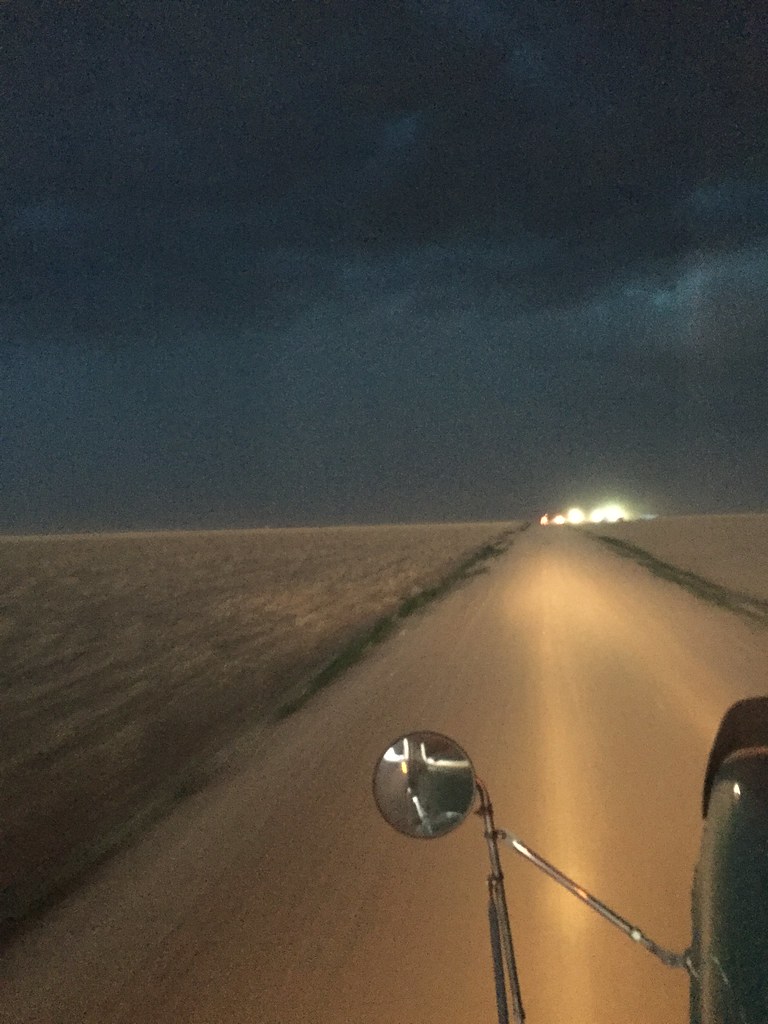 Ryan trying to get back to the combines for another load. (Photo credit: Ryan) 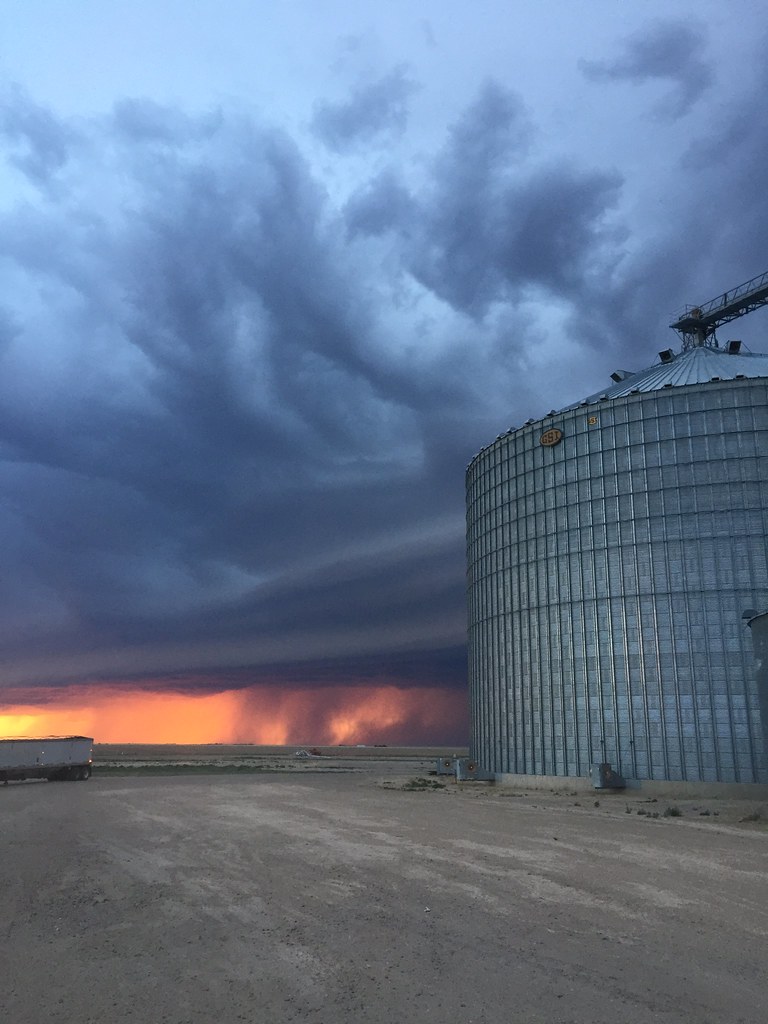 The creeping in on the grain facility. (Photo credit: Ryan) 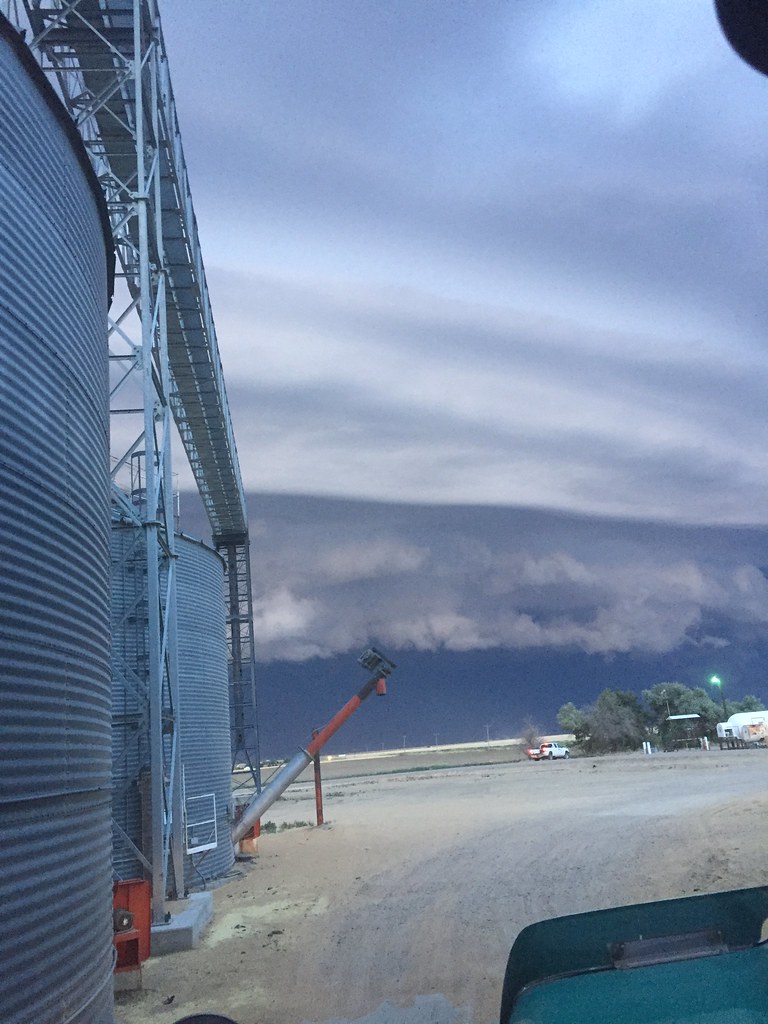 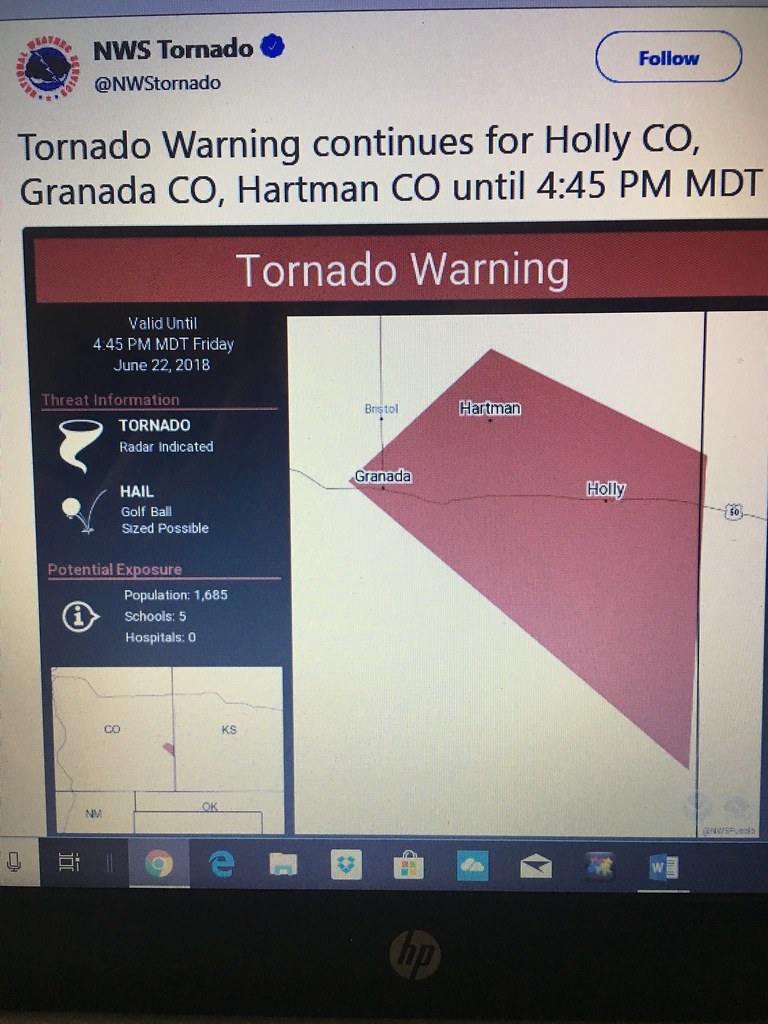 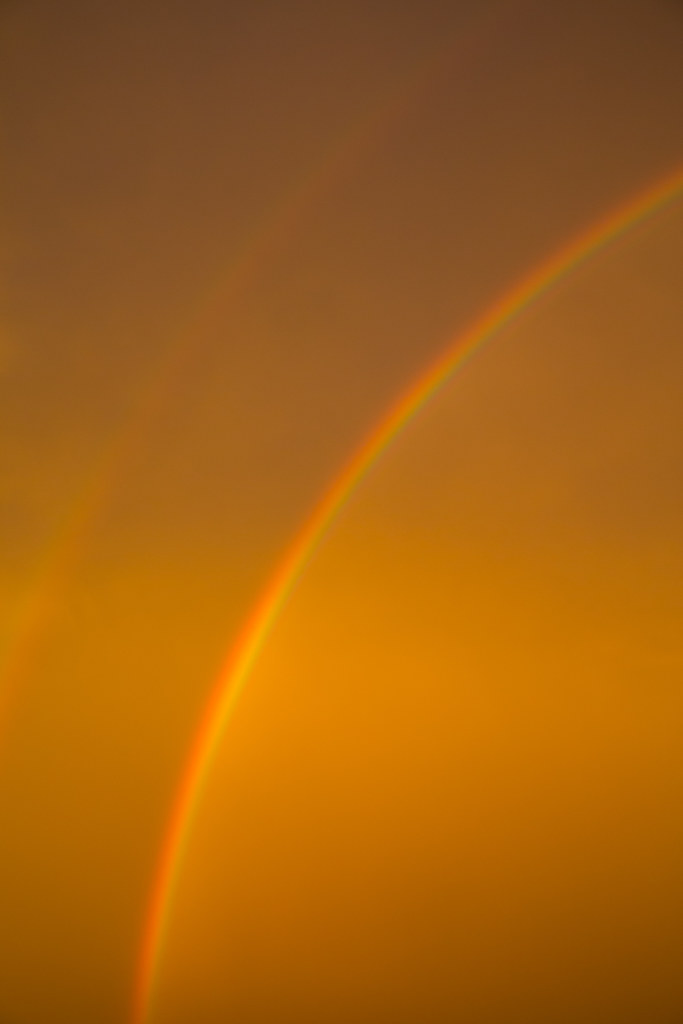 The picture doesn’t do this double rainbow justice. Unfortunately, I didn’t have my camera when it was at its prime. I have NEVER seen such a vibrant rainbow. (Photo credit: Laura) 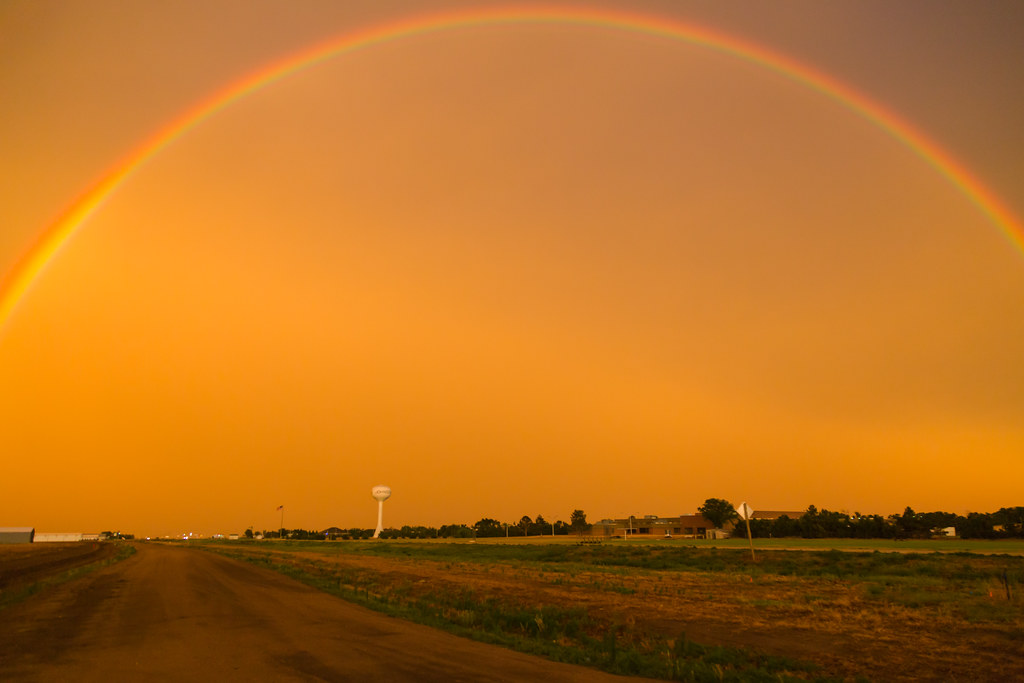