All Aboard Harvest | Tracy: I’m Behind on Everything
16801
post-template-default,single,single-post,postid-16801,single-format-standard,qode-quick-links-1.0,ajax_fade,page_not_loaded,,qode-title-hidden,qode-theme-ver-11.2,qode-theme-bridge,wpb-js-composer js-comp-ver-5.4.7,vc_responsive

10 Jul Tracy: I’m Behind on Everything

Limon, Colorado – Goodness, it’s such a catch 22. I either have enough time to do the things I need to do (which means we’re doing nothing in the field) OR I’m scrambling to figure out how to make it all work.

I’m behind on catching the world up to what we’re up to. I’m behind on paying bills. I’m behind on getting laundry done. Where do I start? But it’s like this because we’re working…and that’s a GOOD thing. A very good thing. 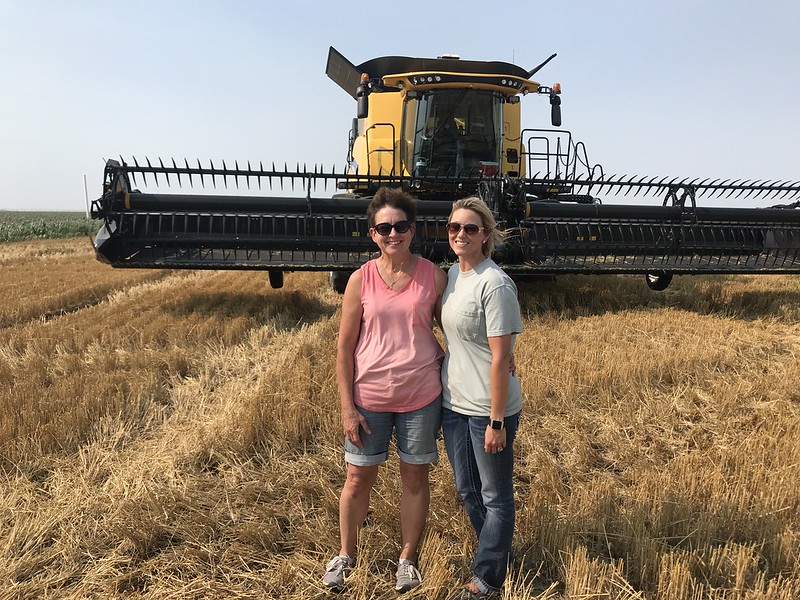 Nice wind-blown hairdo there TZ! Shana and I have “known” each other for some time. But we’ve never met – until that one day in Garden City, Kansas. 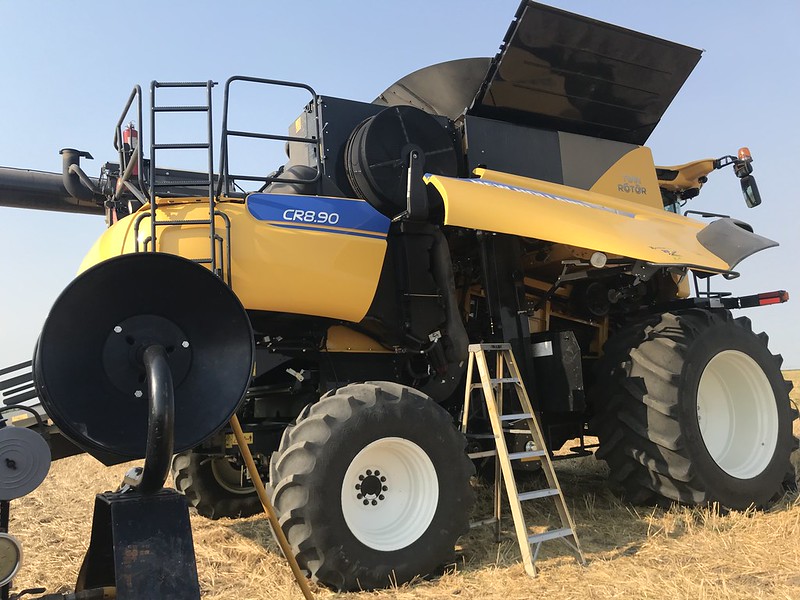 Spending quality time with Jim cleaning the header and combine after completing the job in Garden City. 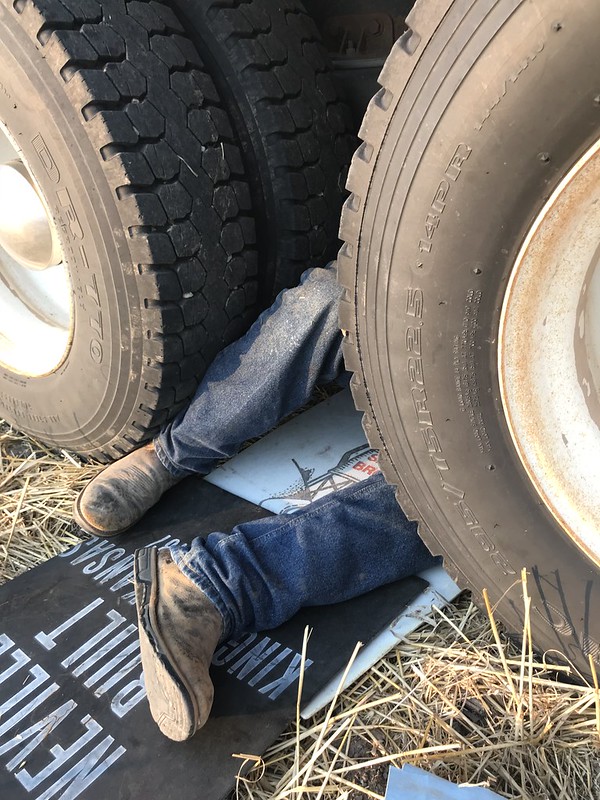 It’s not what it looks like! Just truck maintenance prior to the next move. 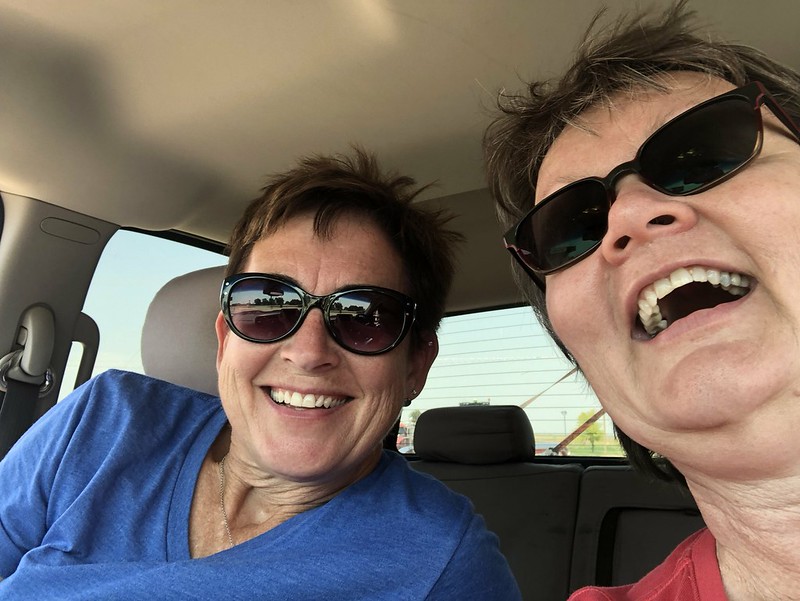 Oh Nanc! Thanks for meeting us at the restaurant in Sharon Springs, Kansas for lunch! You got to take whatever time you get and make the most of it when meeting up with HarvestHER friends! 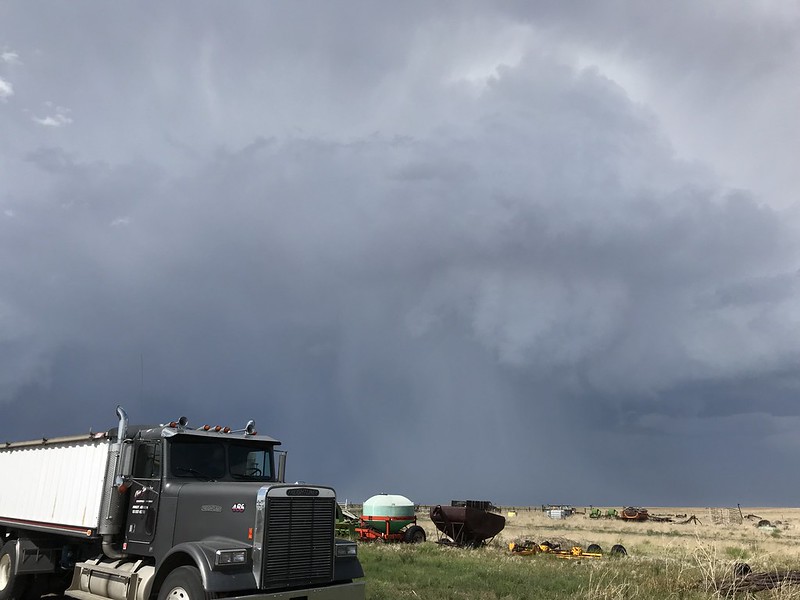 This is the cloud that greeted us the first time we landed in Colorado. It looked like anything could drop from that mess! 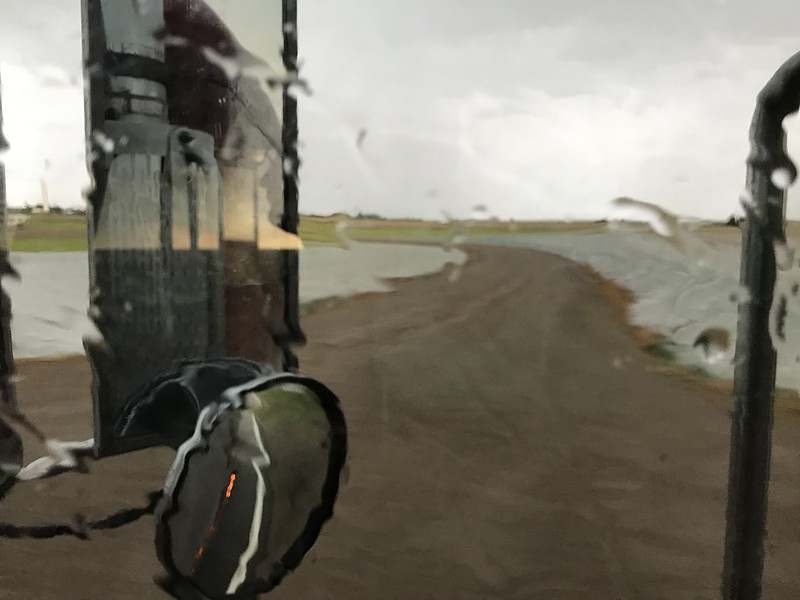 The rain poured on us from west of Cheyenne Wells, Colorado to Weskan, Kansas. There was so much water in such a short period of time, the water was over the road in one spot. 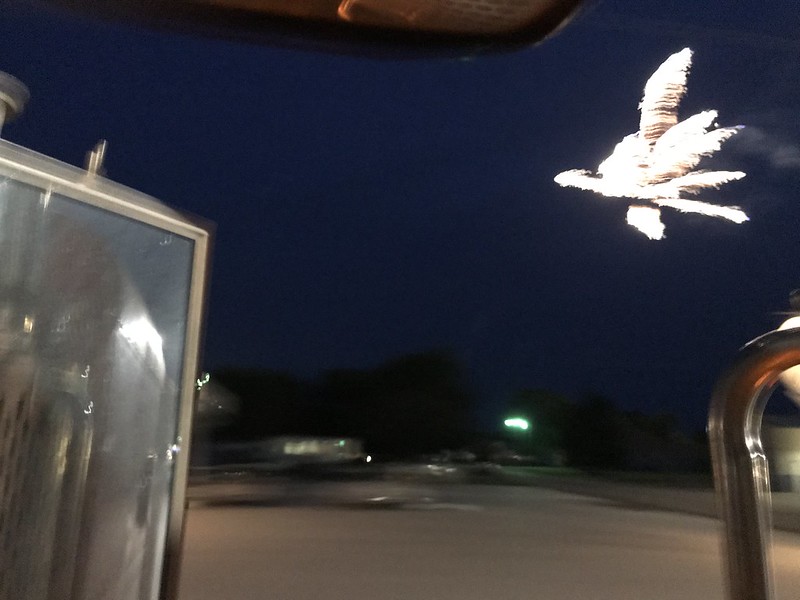 Happy 4th of July from the cab of the Pete – on the move, of course. Jim made the comment he was glad there weren’t little girls at the trailer disappointed that we weren’t back in time to shoot off fireworks.

We arrived in Limon with the second trip on July 5. We dropped the trailer house off in Hugo in a lot just off the city park. We needed to get the combine and truck to the farmer’s yard before those very dark, ugly clouds in the western sky decided to cut loose and rain (or hail) on us.  Jim was already trying to play out the game plan as we were driving west. Speaking of driving west, I was in the truck with him. We decided that was the very first time I was actually in the truck with the loaded combine since we began this adventure some time ago (in 1982). I’m always either in the pickup in front of him or in Frank behind him. We’re never together in the same truck while moving equipment. Never.  Weird! It was just weird and sort of fun to look in the mirror and see that large Beast swaying back and forth. “I wonder what it would be like to ride in that thing while you’re driving down the road.” “Yeah”, says Jimbo, “I’ve often wondered that myself.” 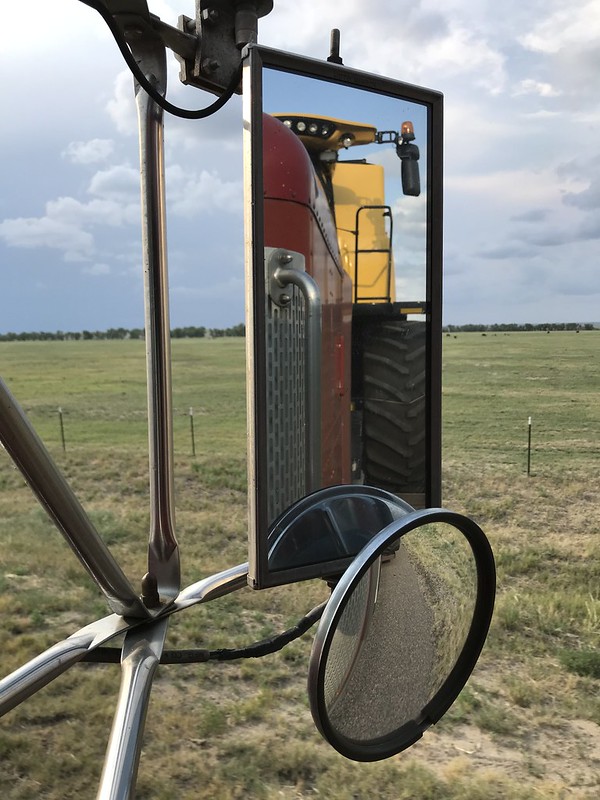 The plan that Jim was putting together in his head was every step needed to enter the farmer’s yard and get parked before the cloud decided to cut loose. “We’ll do this, and then this and finally this.” I’m sure you’ve heard it before. But…then the plan changes. And all the steps that were played and re-played turn into something quite differently. We simply drove “the train” into the yard, parked it, jumped in the service truck and got the heck out of Dodge (not really Dodge). 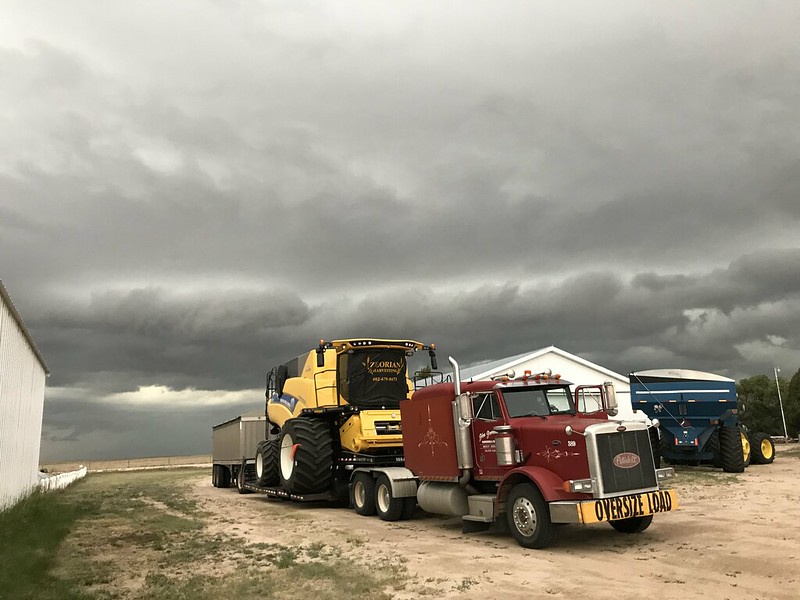 This monster of a cloud welcomed us to our new “home” (Eastern Colorado).

We drove back to Hugo (where the cottage was) and decided to “camp” there for the night. “Why don’t you search google for a place to get a bar burger.” I did. I found the Plain’s Bar, which had decent reviews online. It didn’t matter, at this point. We just needed something in our bellies and then we’d go back to the trailer house and sleep. We were both exhausted!

I called the number listed on the site and Jim talked to the woman who was working behind the bar. “Do you still have your grill on? We’re about 15 minutes away.”

Once we arrived back to town, we found the bar and went inside. You know how it is when a stranger walks into a bar – all eyes are on you and you know they’re wondering who the heck you are. Once we found the booth we were going to sit in, the gentleman at the bar sparked up a conversation with the two of us. He knew who we were but we, of course, didn’t know who he was. We had a nice visit and realized, once again, just how small this ‘ole world really is. 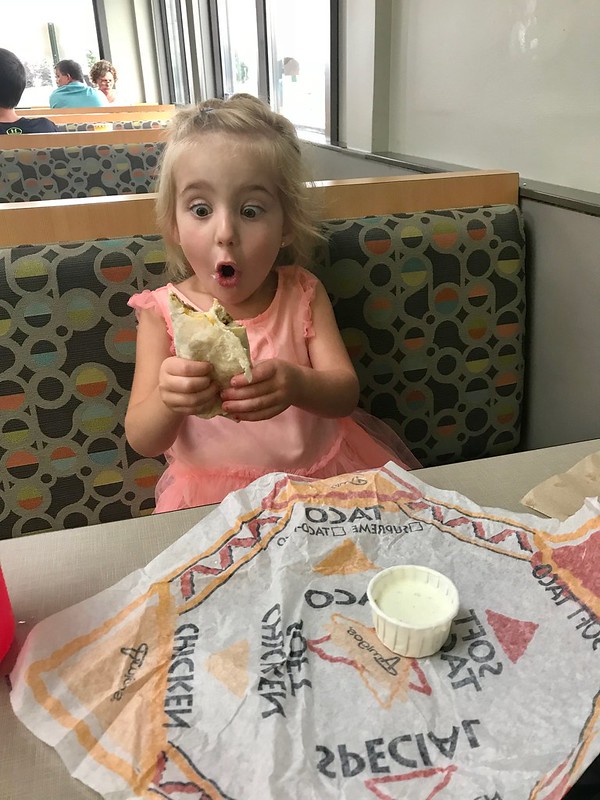 Jamie sent this to me one day with the caption, “She loves Amigos as much as I do.”

The woman behind the bar (and also the same one Jim talked to on the phone) came to the booth and told us our hamburgers were nearly done. “Would you like cheese on those burgers?” Jim and I looked at each other in amazement. She took it upon herself to fry the burgers after the phone conversation ended. We were eating in less than five minutes after we arrived. Whoa! Talk about service!

The next morning, we took the trailer house to the Limon KOA and parked it. I asked Jim if I should “set it up” now or wait until we get back home. By “setting it up”, I mean turn it into a home. I have pictures for the walls and things that need to be put back in place after a move from one location to the next. He told me to just take the fifteen minutes it would take and have it done.

It’s probably a good thing I did! We got back to the farmer’s yard and unloaded the combine. The thought was that we’d test the grain and see where we were with moisture levels. Ha! It was go time! The moisture was plenty dry. 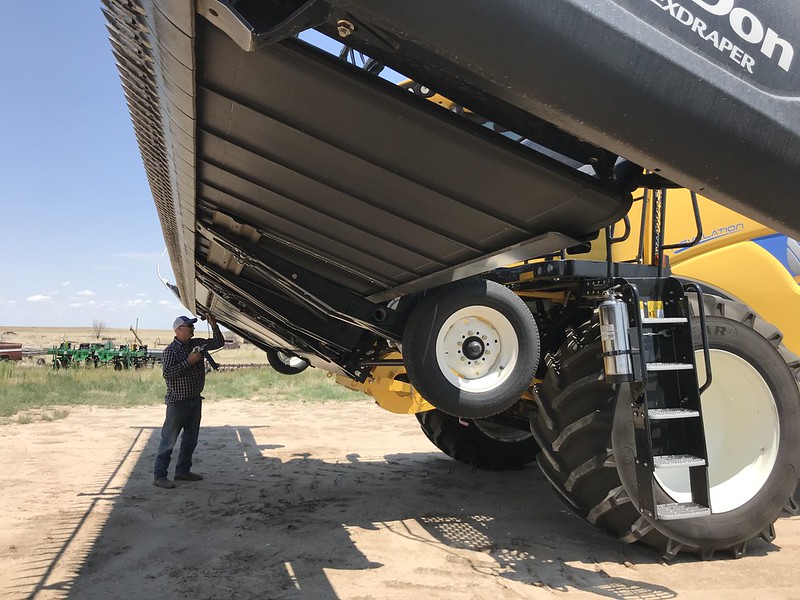 Well this is just cool! You can WALK under the header to service. Don’t worry…the safety block was in place! I knew someone who had their lunch in the shade of the header. I was at his funeral several days later. That sort of stuff doesn’t ever leave your head. 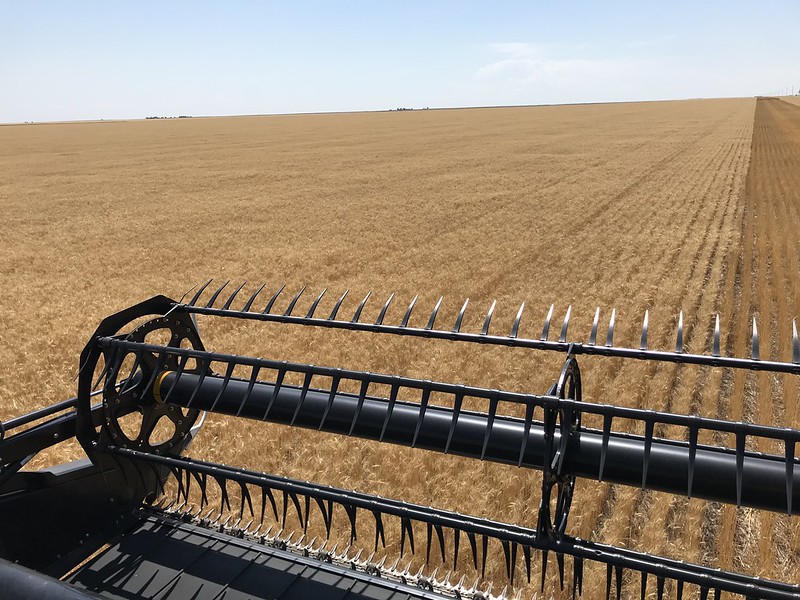 Mile-long Colorado strips. You can actually get something done here! 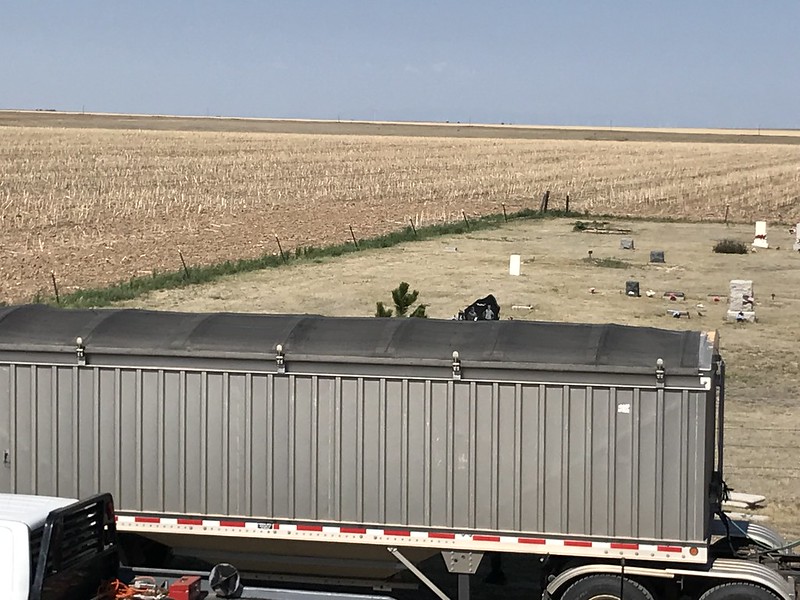 Wes’ headstone is peaking over the top of the grain trailer. It looks like a ragged mountain. Wes was only 13 when he suddenly passed away. I wrote a letter to him after it happened. You can read it here. He was the BEST DARN CART DRIVER EVER! We cut the field just east of this cemetery. I was okay until I walked over to his grave…

We’ve been at it ever since (this was on Friday). The cutting conditions have been perfect for cutting wheat – heat, heat and more heat. As a matter of fact, it’s above normal temps for this part of the world (go figure). The crop is decent for droughty conditions. I was expecting to find less yield and test weight. It looks like the wheat we’ve cut, so far, will average about 30 bushels to the acre. The test weights have been 61/62. I’m not sure if I’ve shared what the Garden City end results were or not – 45 bushel average. The irrigated pivots were WEEDY! They didn’t average as well as they should have/could have – maybe 45/50 bushels. The test weights for the pivots were poor. The others were more in the 60ish range. 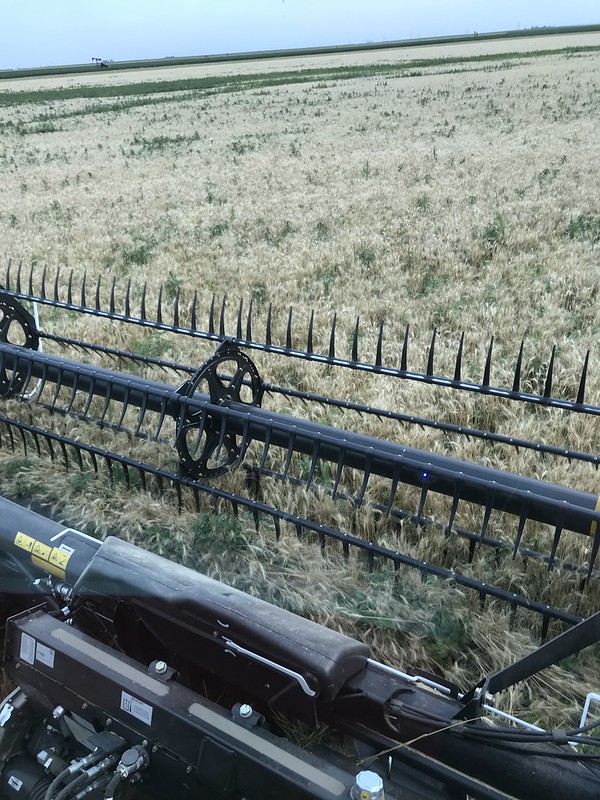 The weedy mess of an irrigated pivot AFTER 5+ inches of rain. 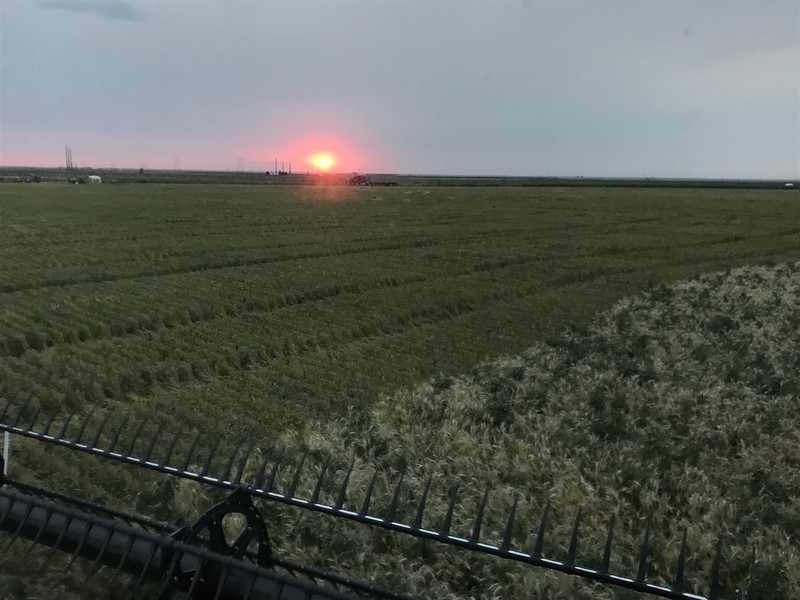 The sun setting on yet another day of harvest.

Currently, I’m sitting here staring at t-shirts hanging on the drying rack, dishes that need to be washed and bills that need to be paid. I tend to get overwhelmed with everything when it starts to look like this. I’ve got to step back and take one step at a time. I’ve figured out I can wash one load at night while we’re sleeping and dry them in the morning while I’m fixing lunches. While these are drying, I can start another load and hang them all over the trailer house to dry. 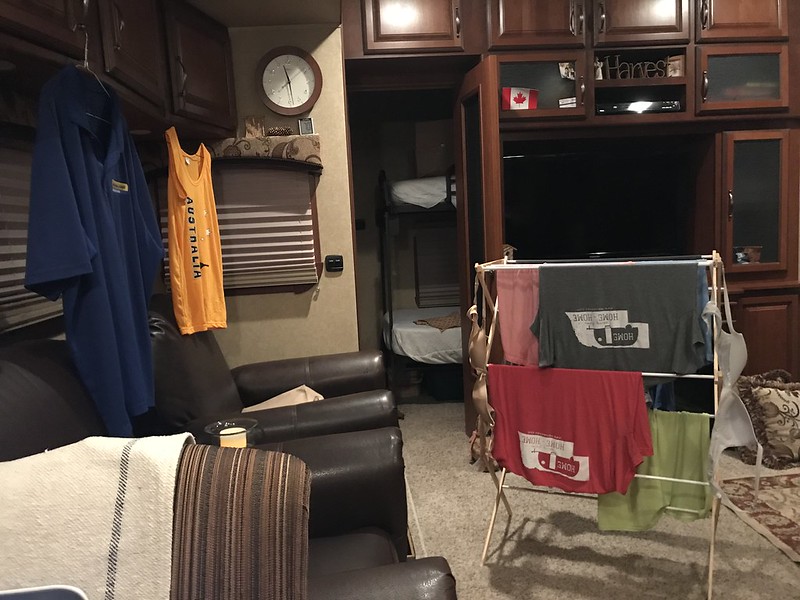 This is the REAL deal! Laundry hanging everywhere, dishes in the sink and bills piled on the table. It will eventually get taken care of…

Tonight we had supper with a harvester friend. He’s much younger than we are but he can remember some of the things we used to have to do on the road. His parents are also custom harvesters. The one thing we were laughing and having so much fun remembering was driving the gas burner trucks – hauling the combines. Top speed…35 miles per hour. How many of you can remember those days?

I’ve got to finish this up so that once Jim gets done with his shower, I can get mine taken. And start another load of laundry. Tomorrow is another day in the wheat field – which is a good thing! 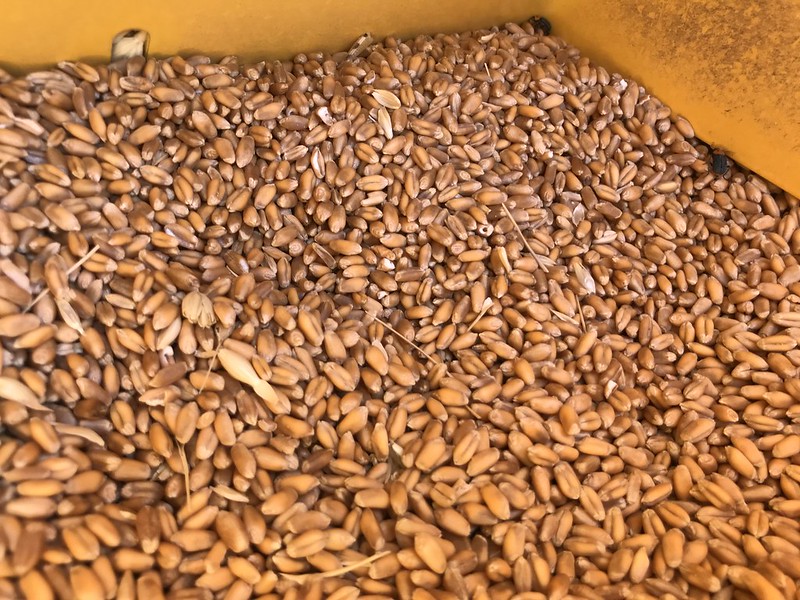 This picture was taken right outside the sample door on the combine. It’s wheat. 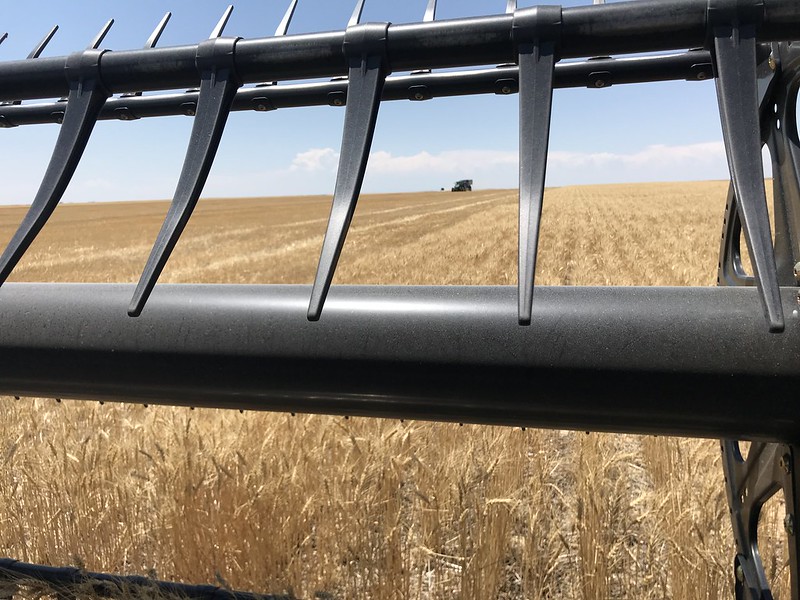 Look! There on the horizon! It’s a tractor and grain cart. We get to feel like real harvesters here. We have the luxury of a cart (the farmer’s). 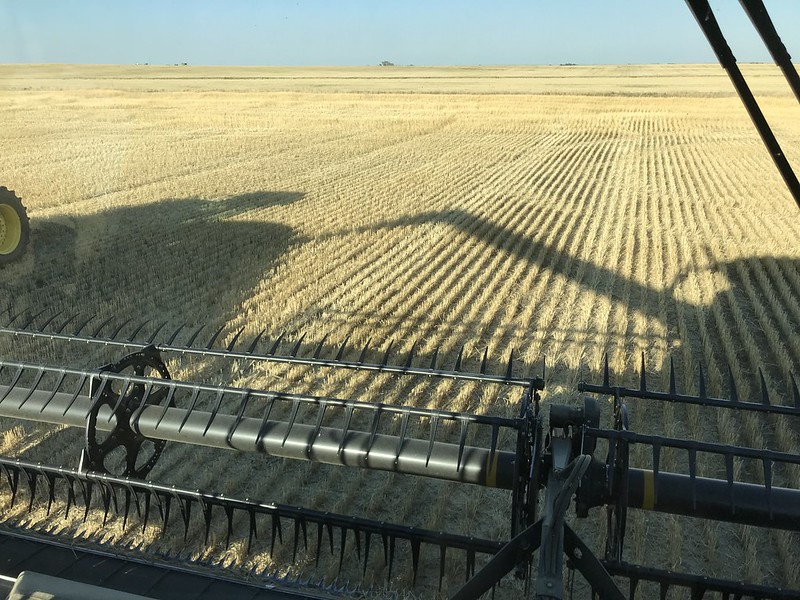 The shadows are long here where the fields are a mile-long. This is known in the harvesting world as “the combine dance”. 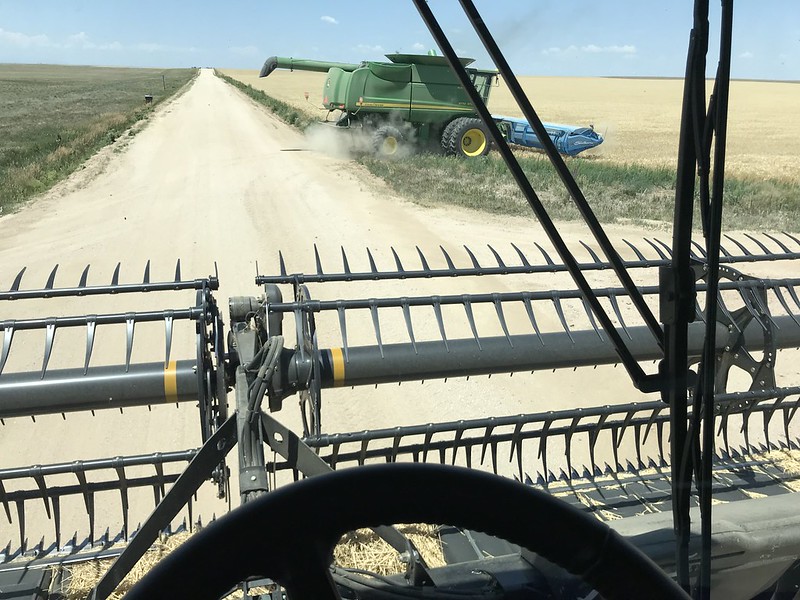 Following our farmer as he opens another field. 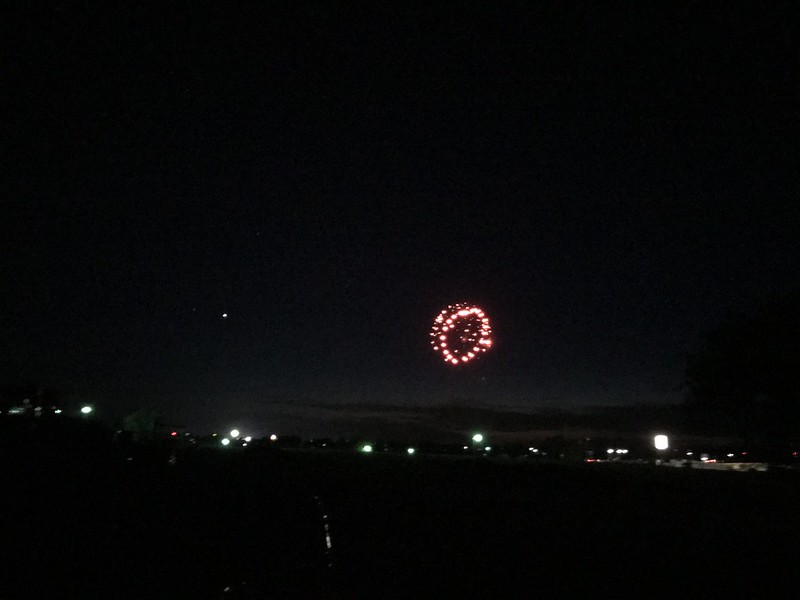 Fireworks on the 8th of July. They didn’t have their fireworks display on the 4th due to severe dry conditions. So, this is what we were greeted with last night when we came in from the field. It smelled HEAVENLY!