All Aboard Harvest | Laura: Waiting on green
17053
post-template-default,single,single-post,postid-17053,single-format-standard,qode-quick-links-1.0,ajax_fade,page_not_loaded,,qode-theme-ver-11.2,qode-theme-bridge,wpb-js-composer js-comp-ver-5.4.7,vc_responsive

South Central Montana: The decision was finally made to wave the white flag and retreat from the field. It was just too green and nothing was going to go. The decision was made to try again Monday, so that gave the crew a short break. After Ryan caught up on paperwork and I on All Aboard posts, we needed to get parts at the John Deere dealership in Billings. We used it as an excuse for family time, went to lunch and followed that up with a trip to Pictograph Caves and Pompey’s Pillar. The day before I took the kids to the Little Bighorn Battlefield National Monument. South central Montana has so many great historical and natural places just a short drive from one another (short in harvester terms)!

The next day we went to a local church. They were hosting a special breakfast for harvesters. The service was beautiful and just what I needed, but the hospitality nearly moved me to tears. We talked to several members who were farm families themselves. We all know harvest/summer is a stressful season (ag or not), so to take time out of their own busy lives to feed the transient harvesters spoke volumes to me. And apparently, it’s a yearly tradition!

Our crew also took advantage of their time off, rented a pontoon boat and spent the day cruising Big Horn Canyon. I hear its quite the view from the boat. We also went to the lake, but viewed it from the top and marina. Yellowtail Dam was impressive as well. We finished the day by grabbing pizza at a country outfit, and the owner gave the kids some fish food to feed the trout in his pond. That made have been the biggest hit of the weekend! 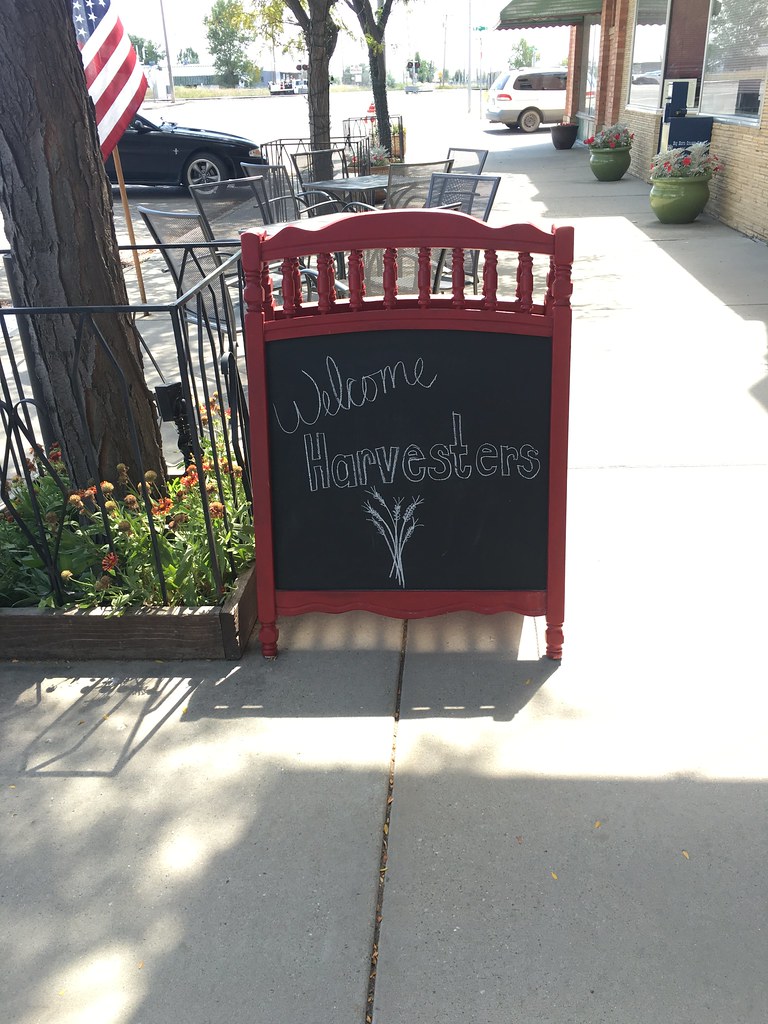 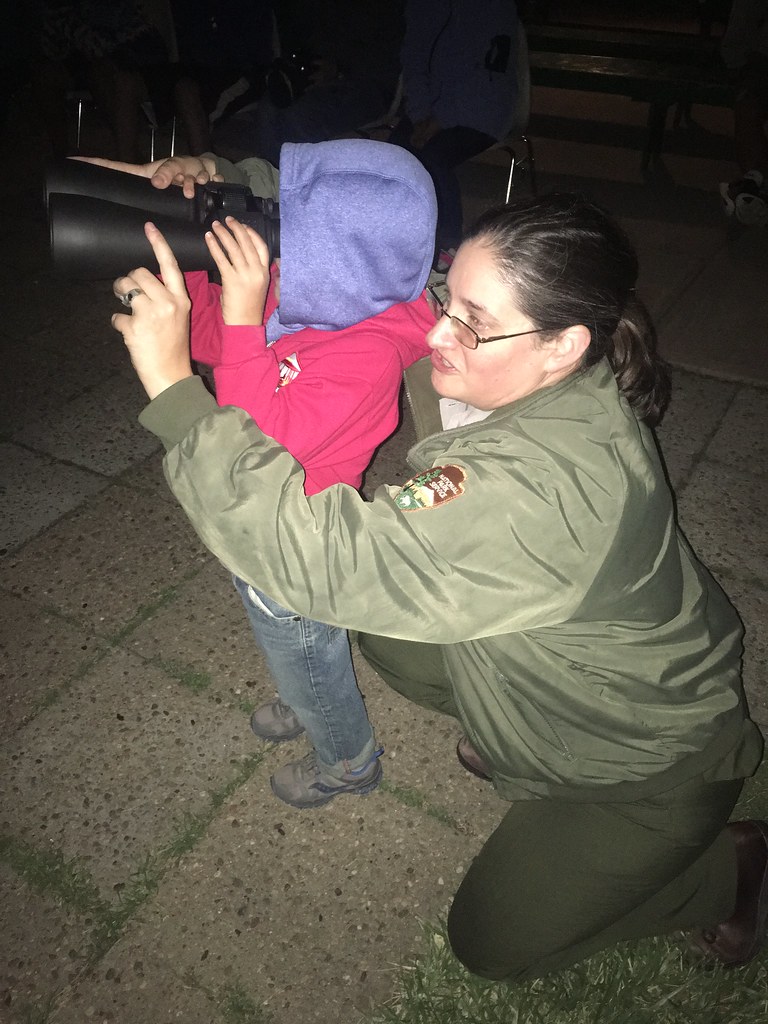 We tried to take advantage of a night sky program at the Little Bighorn Battlefield, but the clouds rolled in just as we arrived, so we weren’t able to used the telescope. The ranger still tried to make it special and helped the kids look around with binoculars and told stories about traditions of other cultures and the moon. (Photo by Laura) 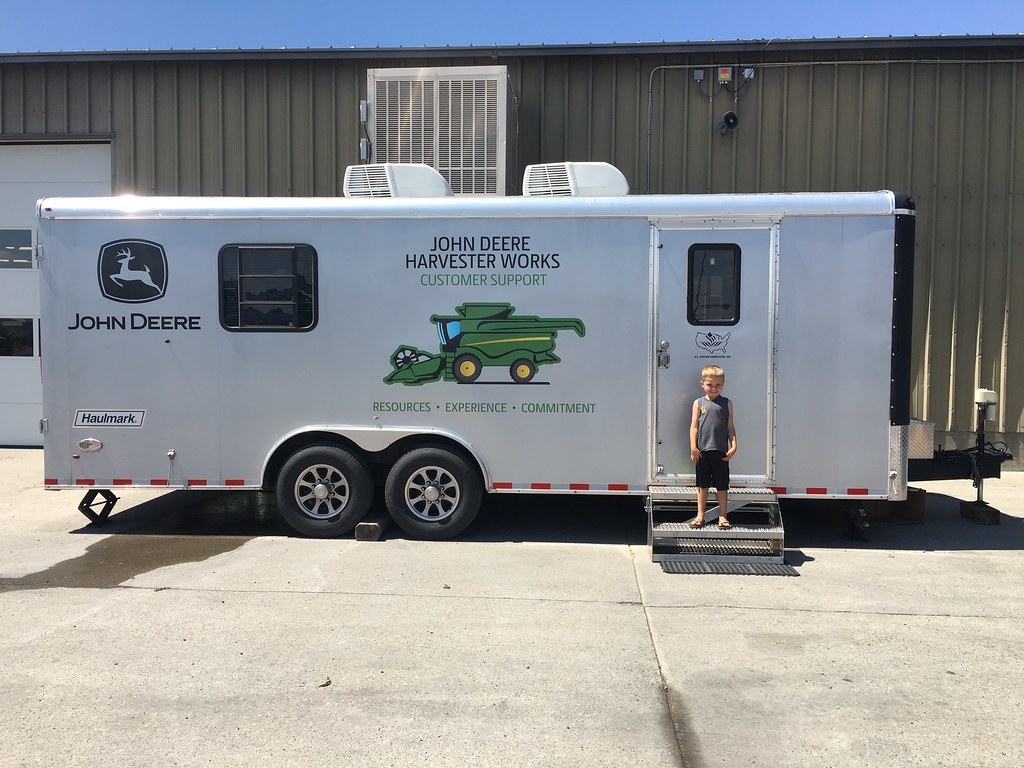 Visiting the Deere dealership in Billings for parts. (Photo by Laura) 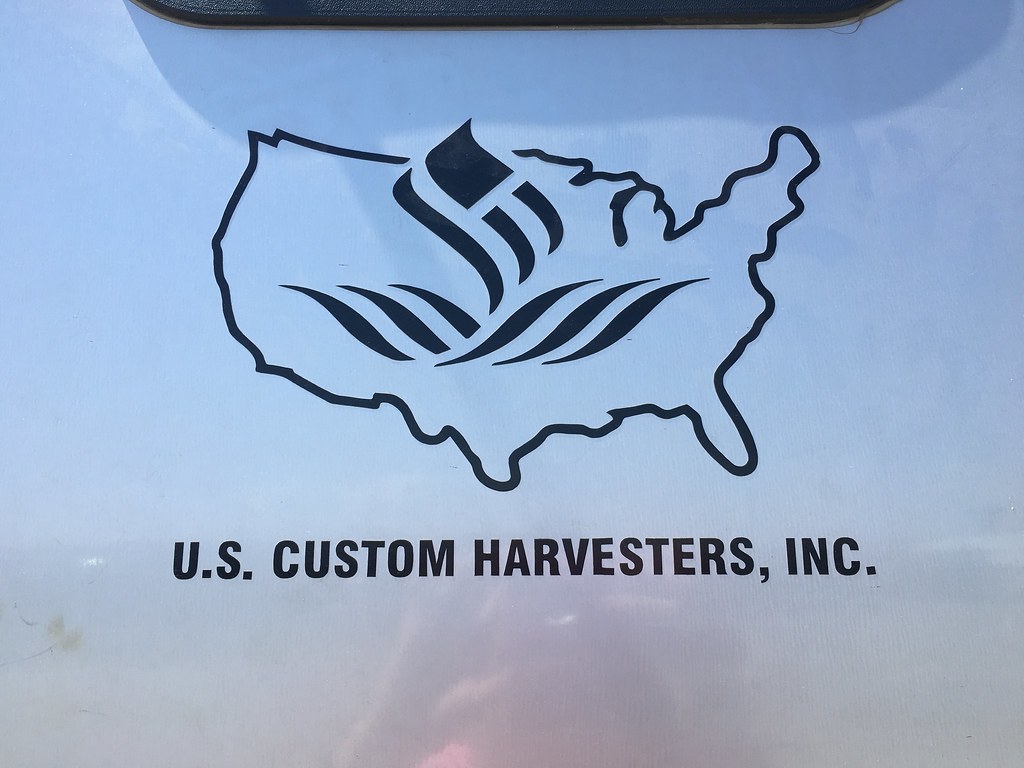 Did you know there is an association of professional harvesters? This sticker was on the trailer of harvest support. (Photo by Laura) 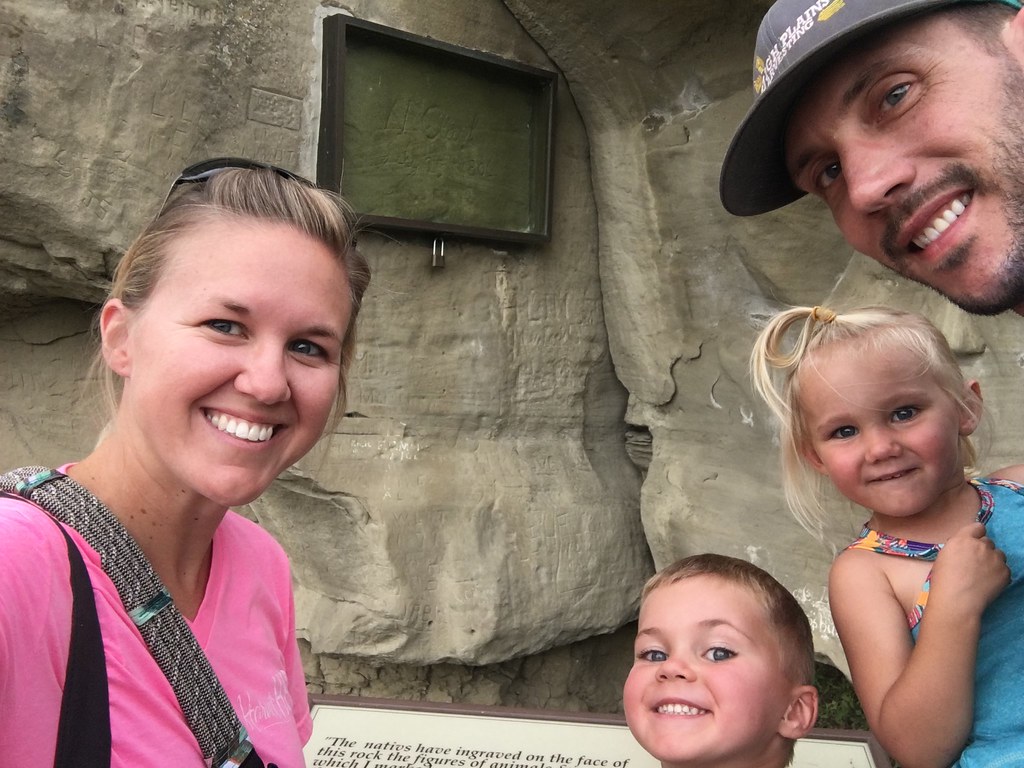 The family at Pompey’s Pillar. In the box is William Clark’s signature (as in “Lewis and Clark”). (Photo by Laura) 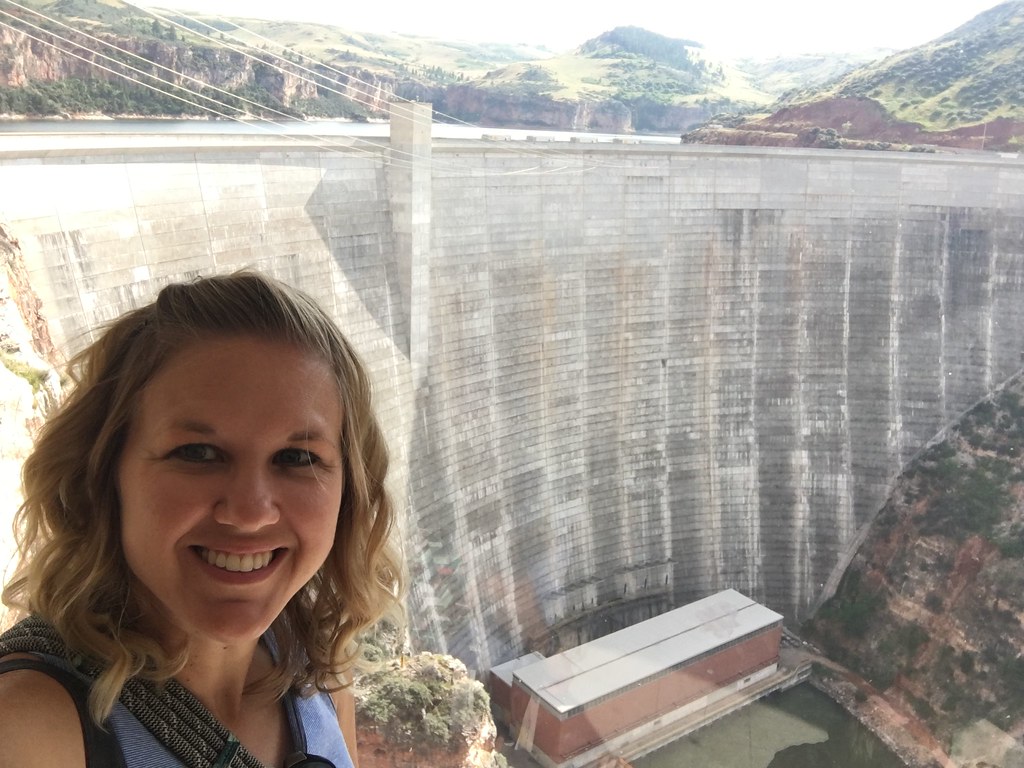 View of the Yellowtail Dam. (Photo by Laura) 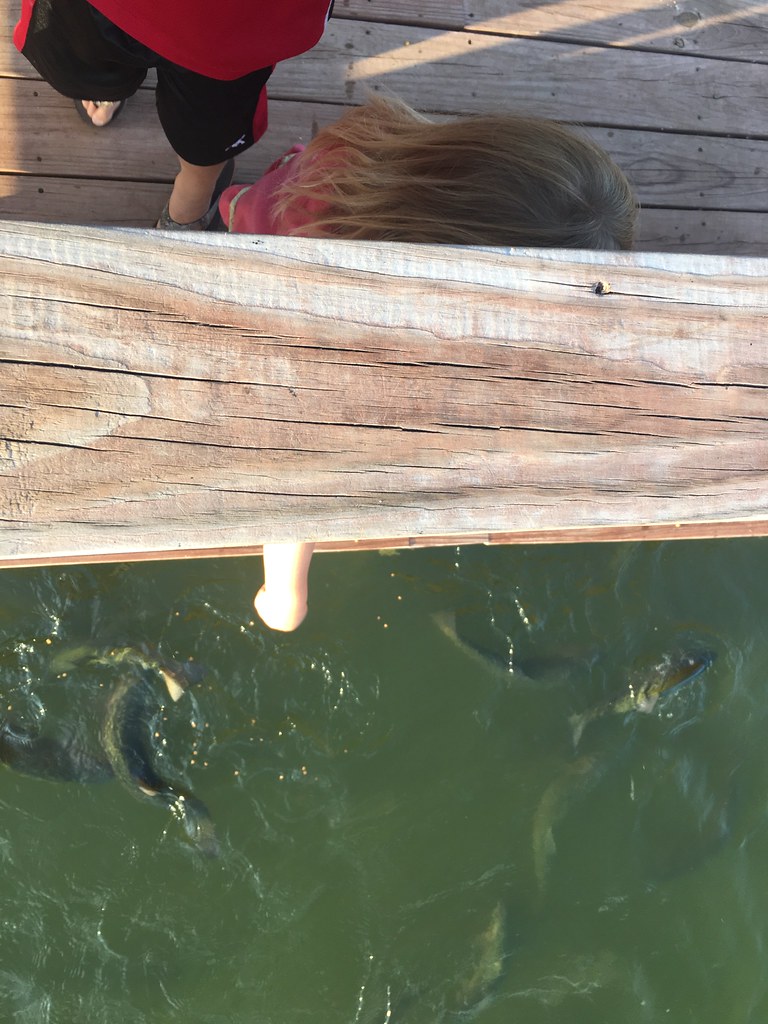 Feeding the fish. While the rest of us tossed slowly, a couple at a time, Lady A used the “handful” method to feed them. The trout liked Lady A’s style. (Photo by Laura)