All Aboard Harvest | Tracy: Spring vs. Winter
17100
post-template-default,single,single-post,postid-17100,single-format-standard,qode-quick-links-1.0,ajax_fade,page_not_loaded,,qode-title-hidden,qode-theme-ver-11.2,qode-theme-bridge,wpb-js-composer js-comp-ver-5.4.7,vc_responsive 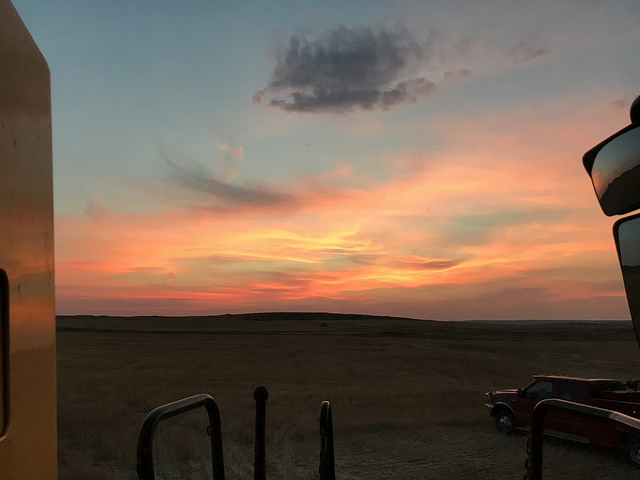 Jordan, Montana – We are done cutting winter wheat for 2018. But…we’re still cutting wheat. So, what’s the difference between the two crops? They look exactly the same – in the field and in the bin. 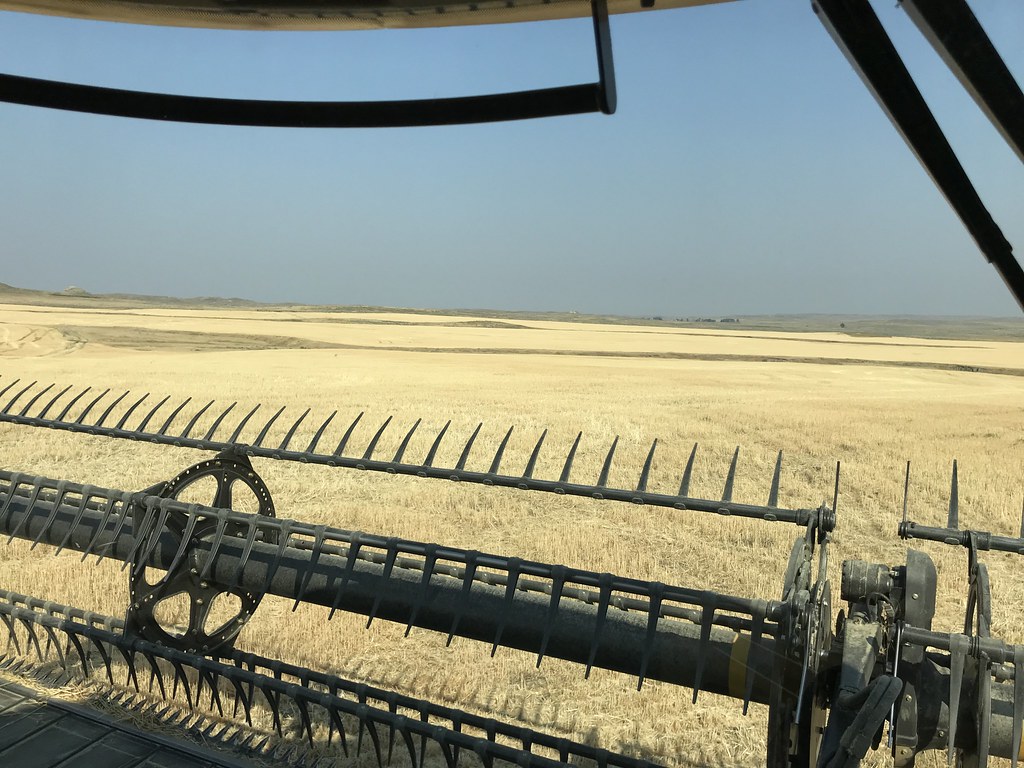 Sometimes these large fields can seem overwhelming. And then they just become several smaller fields within a large field and it doesn’t seem quite so bad. 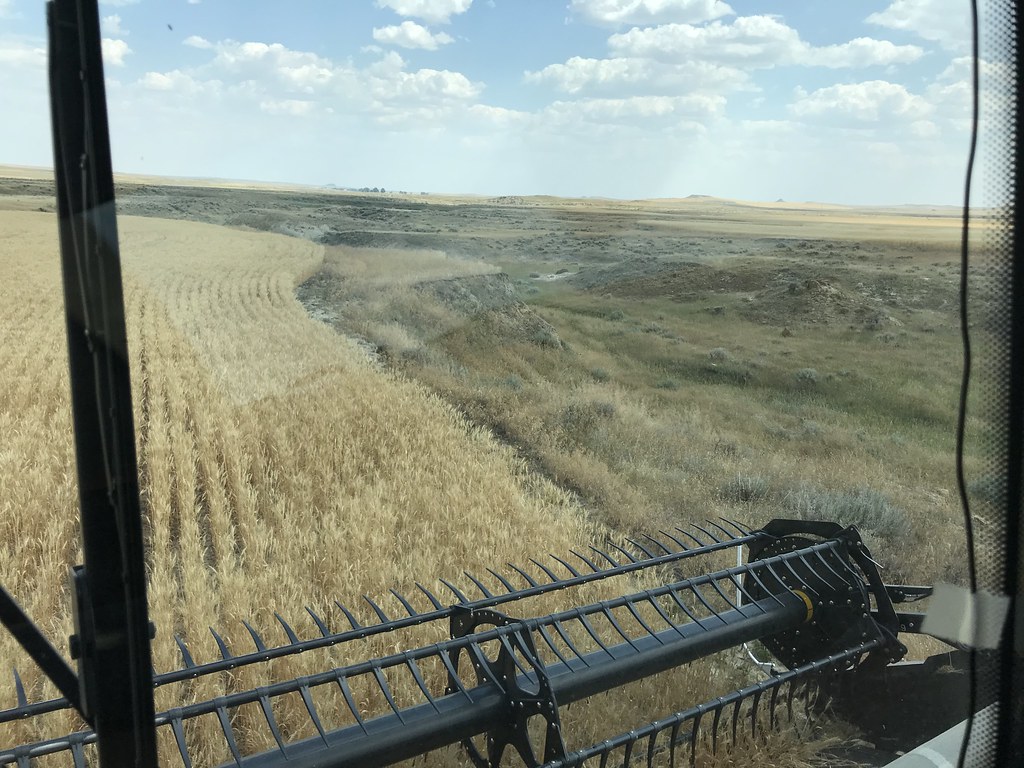 The picture doesn’t do the depth of this “canyon” any justice. It was really quite impressive!

Winter wheat is planted in the fall and harvest begins in early spring and moves northward through the summer months. This type of wheat begins to grow in the fall and then requires a period of cold dormancy. Winter wheat won’t flower until it has experienced being exposed to the cold, wintery conditions. When the soil begins to warm up in the spring, the plant will continue to grow and produce the grain that we “wheaties” chase from south to north in the summer. 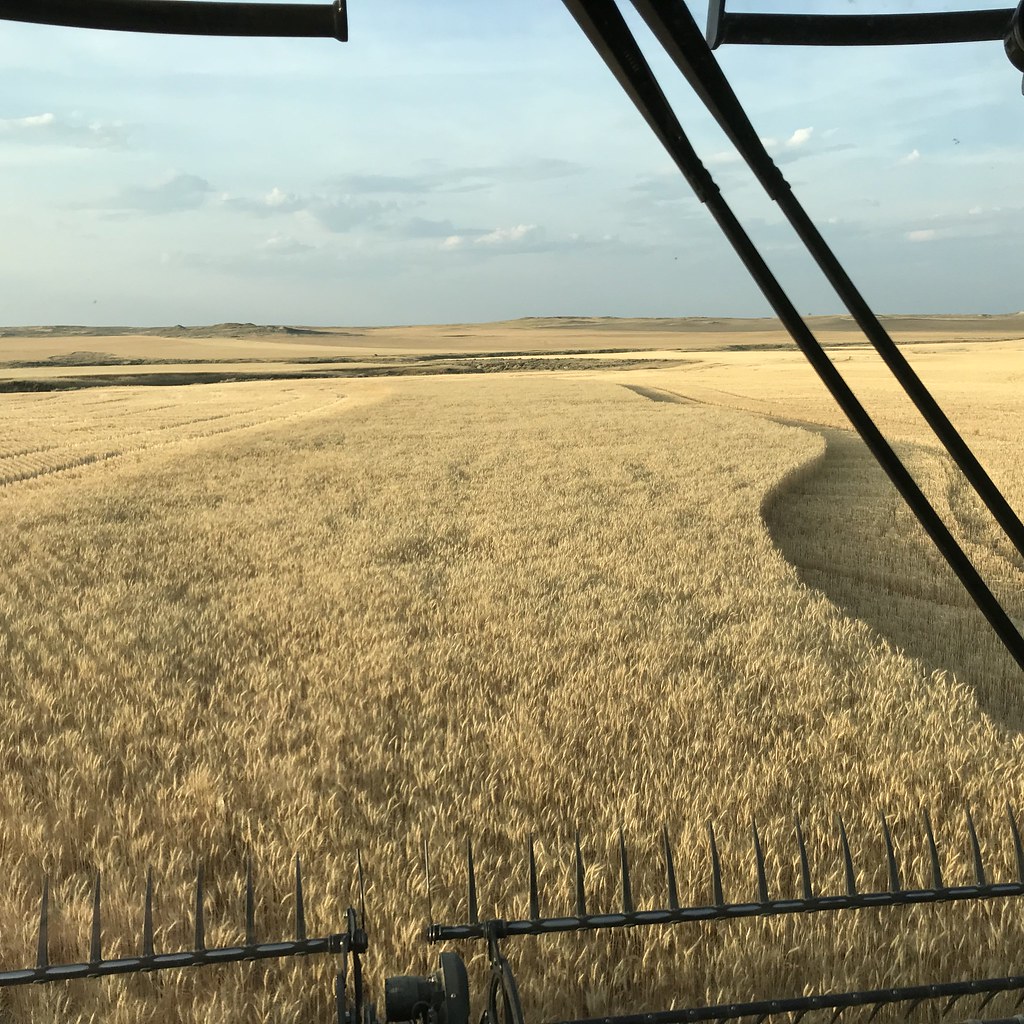 I loved everything about this when I turned the corner and saw the colors and the curvy lines. 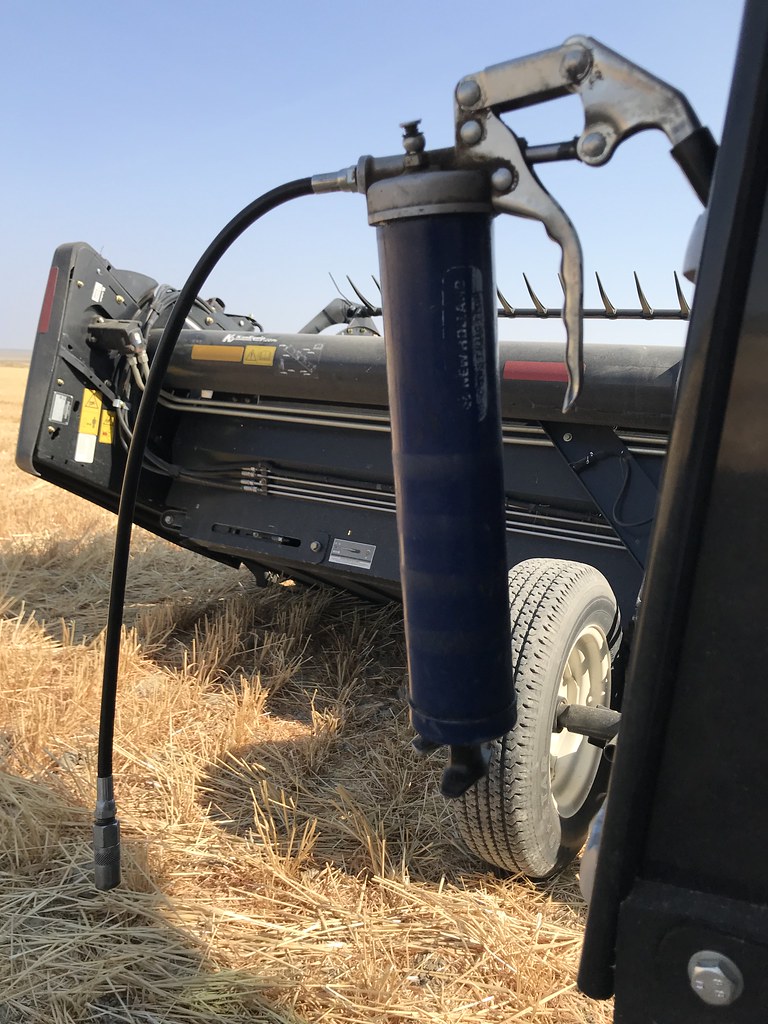 We’ve got our morning routine pretty much down by now. When we arrive to the field, I make sure the lunch boxes and water jugs are where they belong for the day while Jim is getting fuel to the combine. Once I have the boxes and jugs delivered, I join him on top of the combine and “watch” to make sure the fuel doesn’t overflow. He’s generally dumping DEF in the combine by then. While I get my “office” ready for the day, Jim greases the machine. And we’re off! 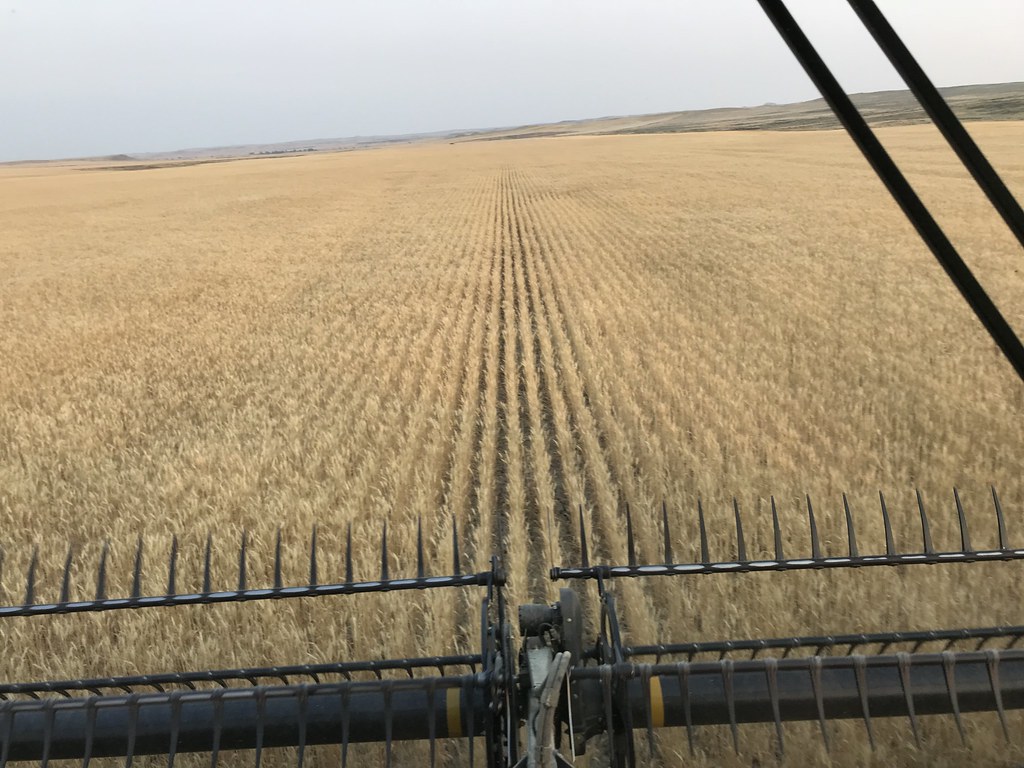 About as straight as it can get up here!

Farmers in the northern states are up against much colder, more severe winters and a shorter growing season. Therefore, spring wheat is typically the plant of choice. Spring wheat is planted in the spring and does not require going into a dormancy state before it flowers and produces. Once this type of wheat is sown, it continues to grow until it is harvested in late summer/early fall. Hard red spring wheat boasts being the aristocrat of wheat for baking bread due to its high protein content (ranging from 13 to 16 percent), strong gluten characteristics and high water absorption.

We finished the first field of spring wheat today (350 acres) and moved to field #2 (approximately the same size).  The fields are large and windy. They have ditches and ravines from the spring snow melt-off and heavy rains. We don’t have a grain cart. Going across the rows is rough because the ground is so hard, so I have to slow down. Take all of this into consideration when I tell you my daily challenge is…trying to beat my best day of cutting (so far). That particular day, I cut 126 acres. I’m hoping I can report a record-breaking day, soon! 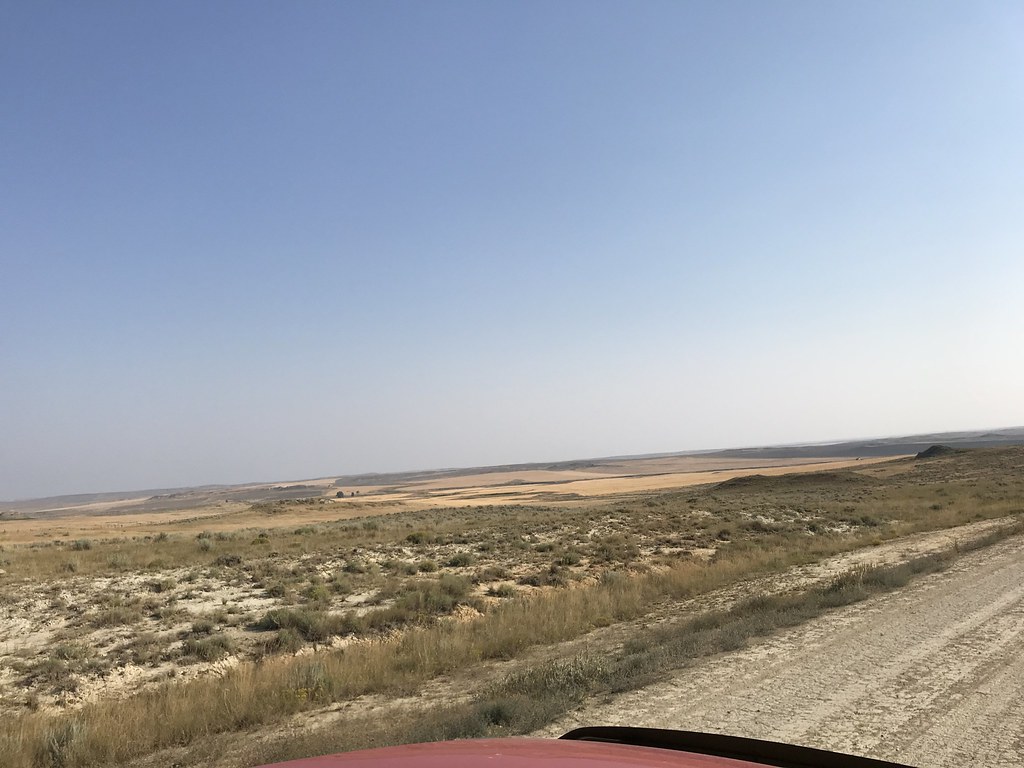 Look really close. There…over to the right side of the wheat. A very tiny, tiny speck of yellow. That’s The Beast sitting there waiting for our daily return. 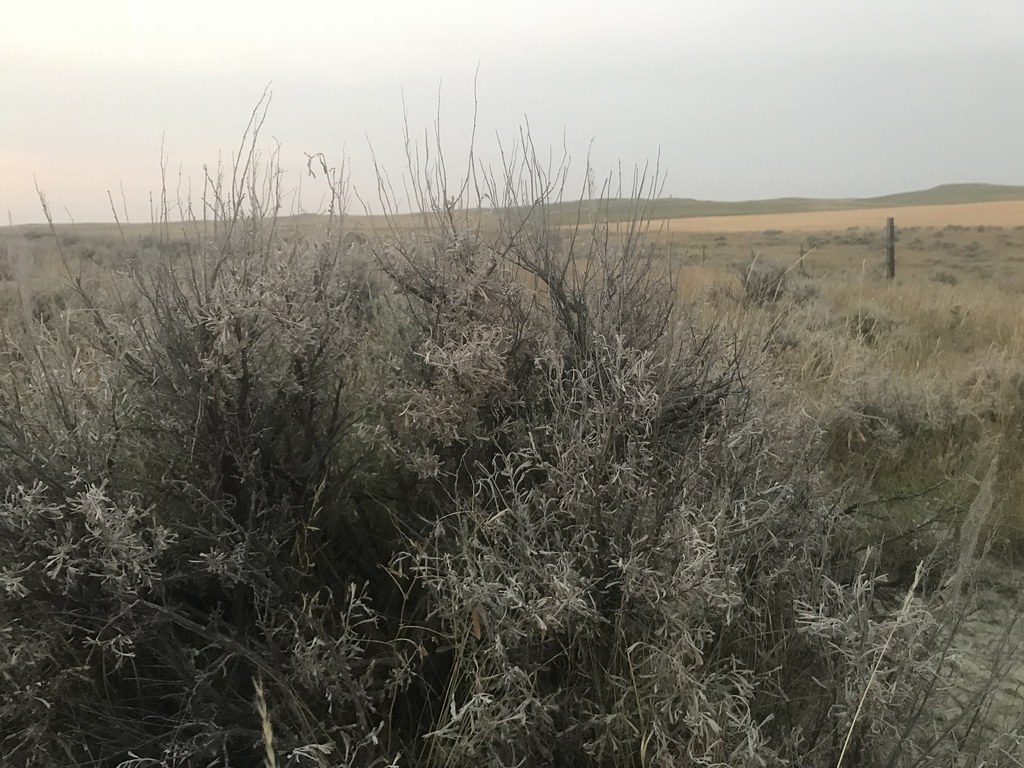 Lots and lots of sagebrush. I was once told if you see a large area filled with sage, it would probably be a good place to break ground and farm. I don’t know if it still holds true or not. 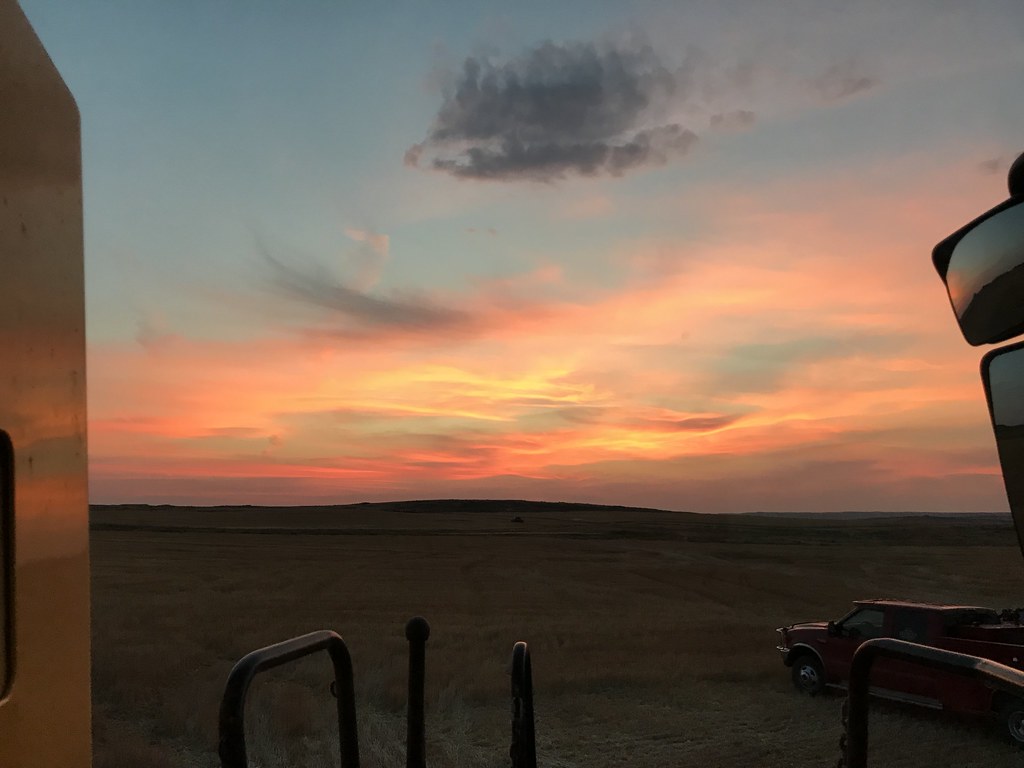 Nothing beats a good sunset – especially a Montana sunset!

Poor Jim is dealing with the three D’s – dirty, dusty and dry. The roads have been reduced to powder in places. He showed me how deep it was on a particular road with his hands – about a foot deep. It sifts everywhere. It’s a good thing neither one of us is allergic to dust! It appears the next several days won’t be much better for him, either. The weather man says record breaking heat and dangerously high fire conditions. It was just a year ago, this area was battling the worst fire in Montana’s history. We don’t need anything like that again! 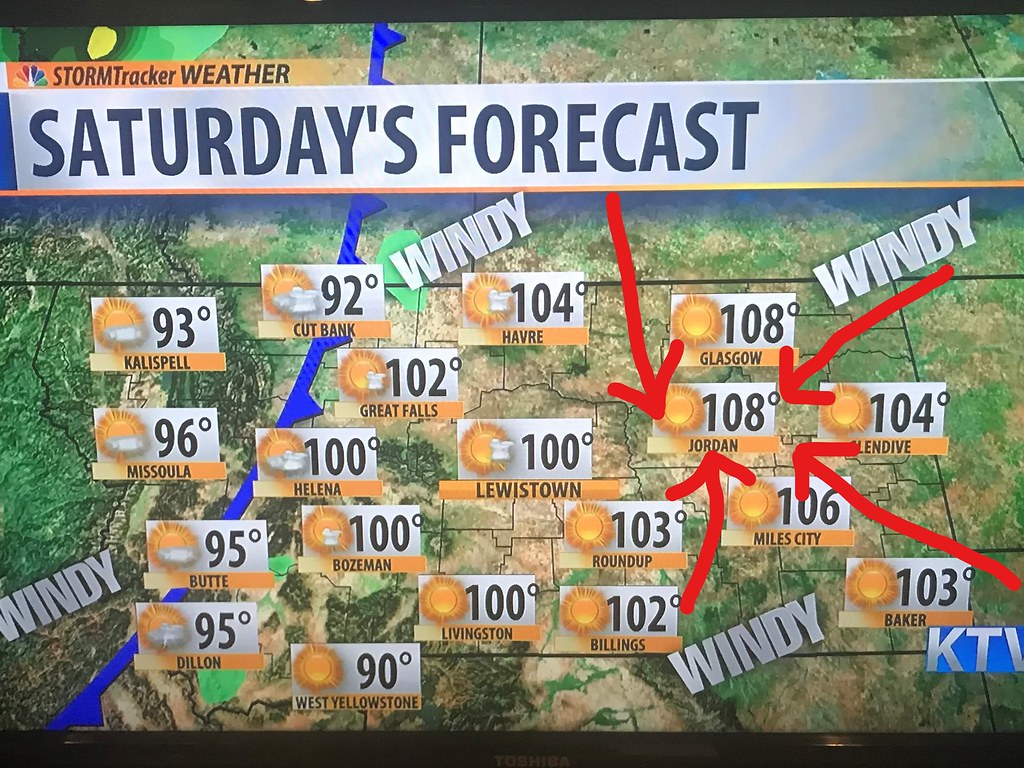