All Aboard Harvest | Tracy: Nearing the End
17220
post-template-default,single,single-post,postid-17220,single-format-standard,qode-quick-links-1.0,ajax_fade,page_not_loaded,,qode-title-hidden,qode-theme-ver-11.2,qode-theme-bridge,wpb-js-composer js-comp-ver-5.4.7,vc_responsive 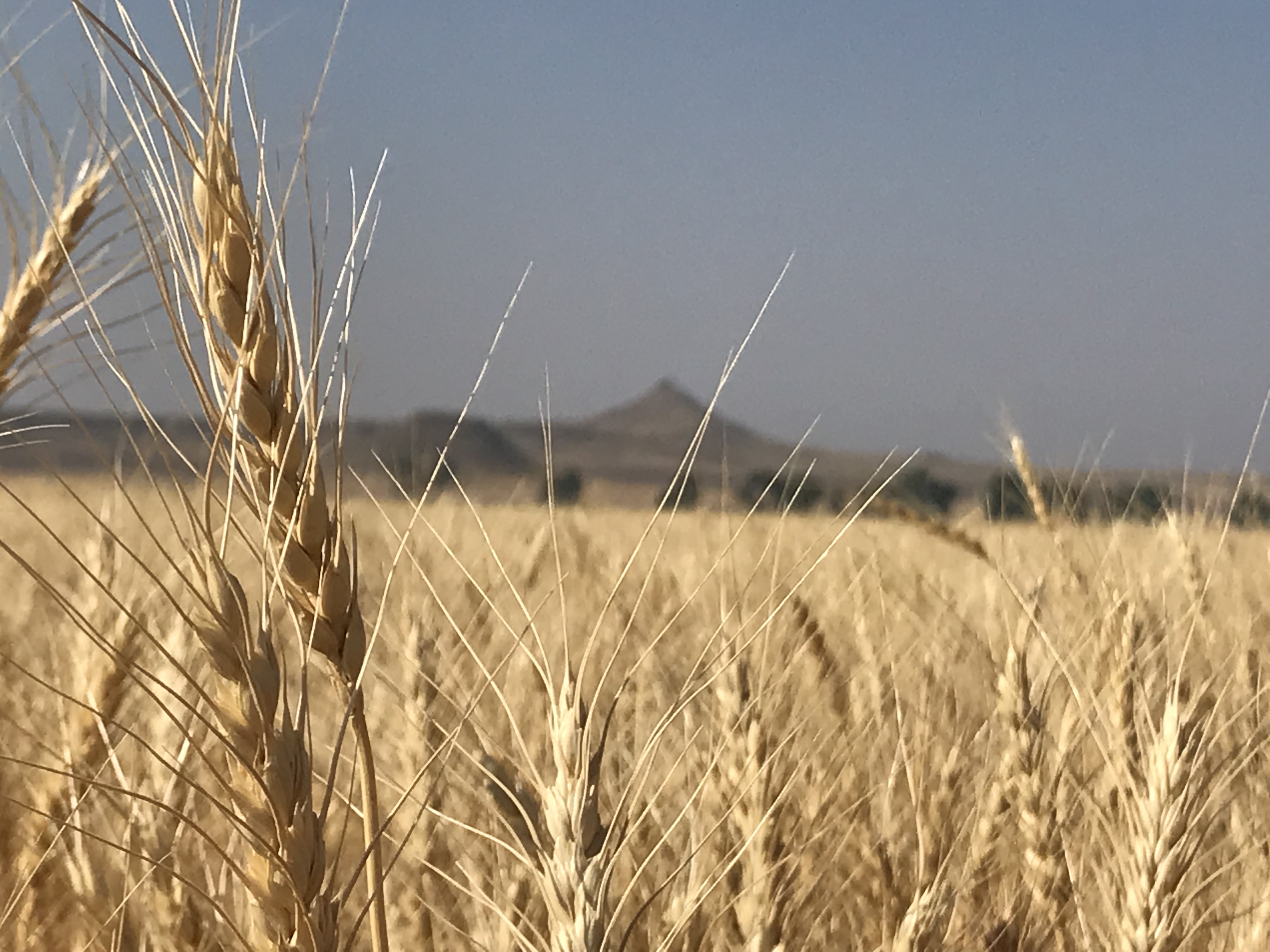 Jordan, Montana – It was 41 degrees yesterday when we got up. My very first action of the day was turning on the “fireplace”. It’s actually just a glorified space heater but it looks nice and it does a fine job of warming up the Cottage in a short period of time.

When the flies start hanging around the screen door late in the day, you know you may as well count on the next morning beginning with the heat of the fireplace.

Where did it go? Summer, that is. How does it go from being 108 degrees to 41 in such a short period of time? It happens like that up here in Montana. I’m just never ready for summer to be over and the reminder of winter just around the corner. I wait too long for those warm days to return. Those first days when coats remain hanging up and not on you. The days of shorts and tank tops. 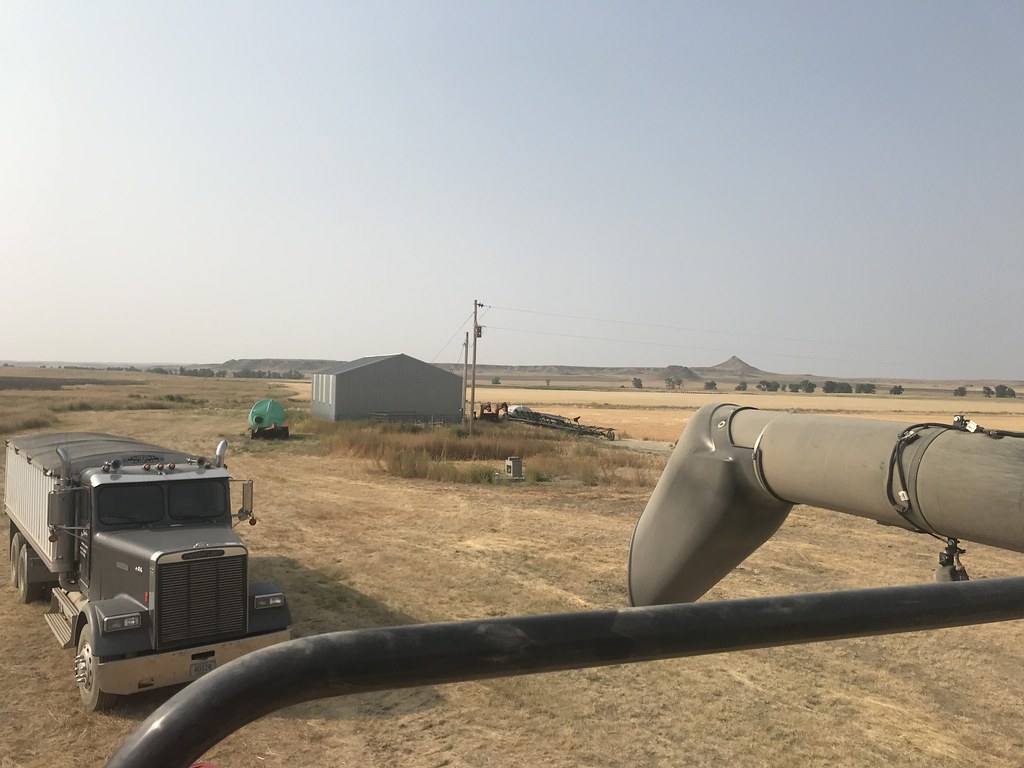 Our final day of cutting the acres we came to Jordan for. 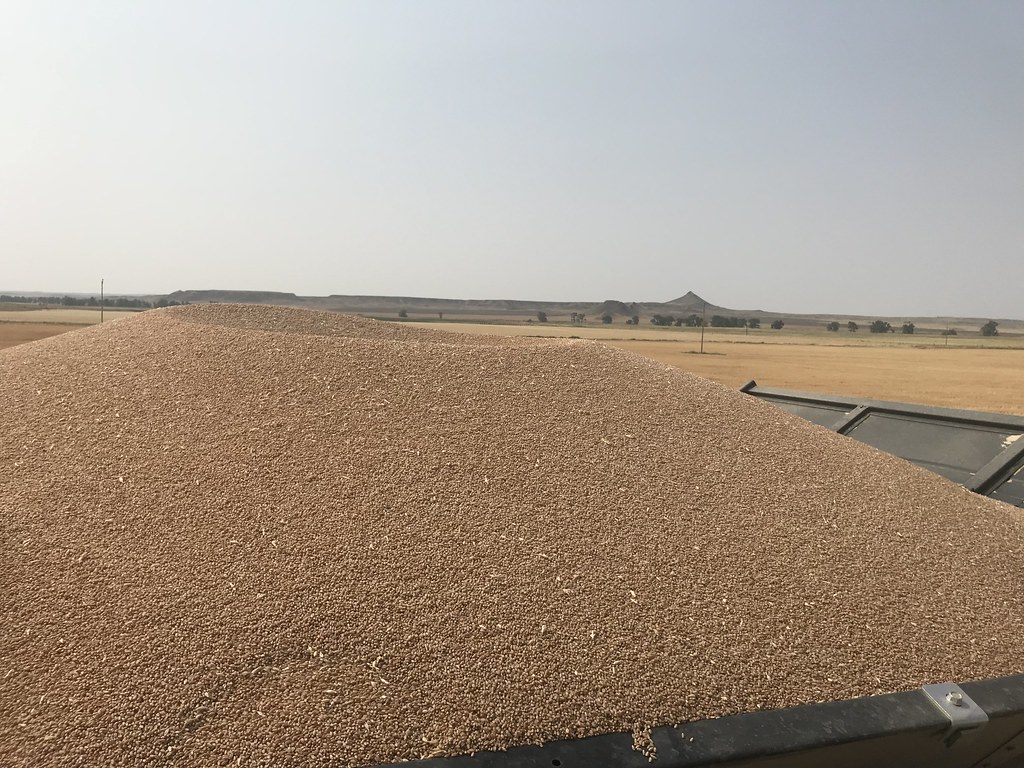 I maxed ‘er out before I had to sit and wait on a truck. 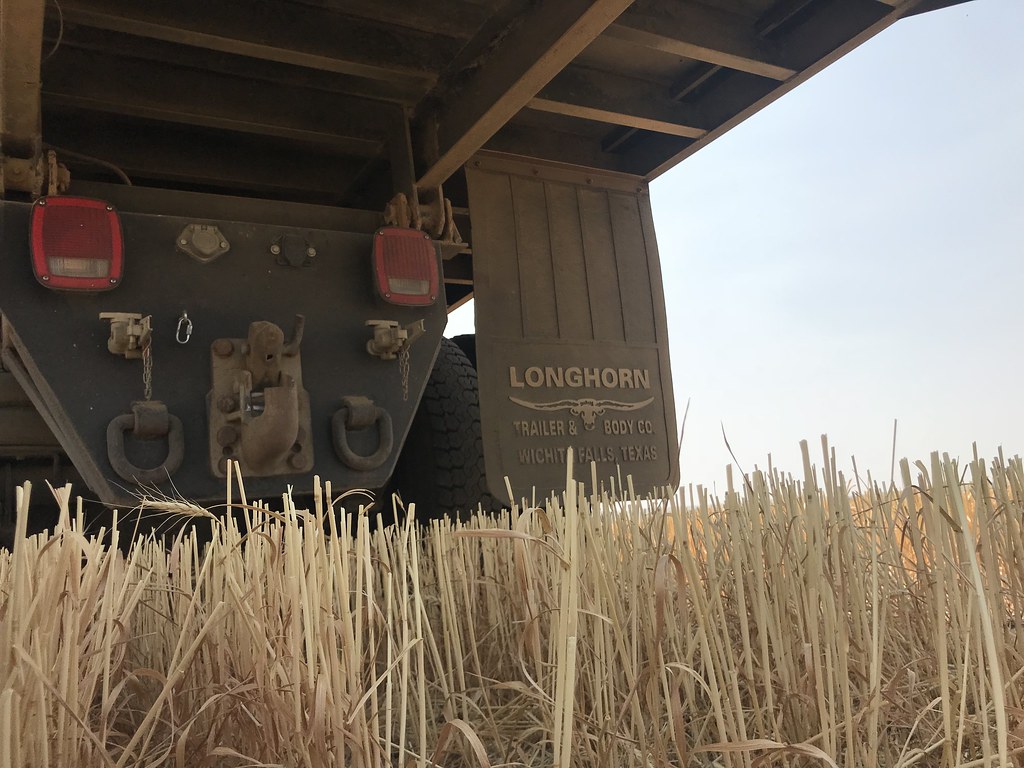 While I was waiting for the truck to return, the only shade I found to escape to was at the back of Frank (which was full). This is my view from the ground. 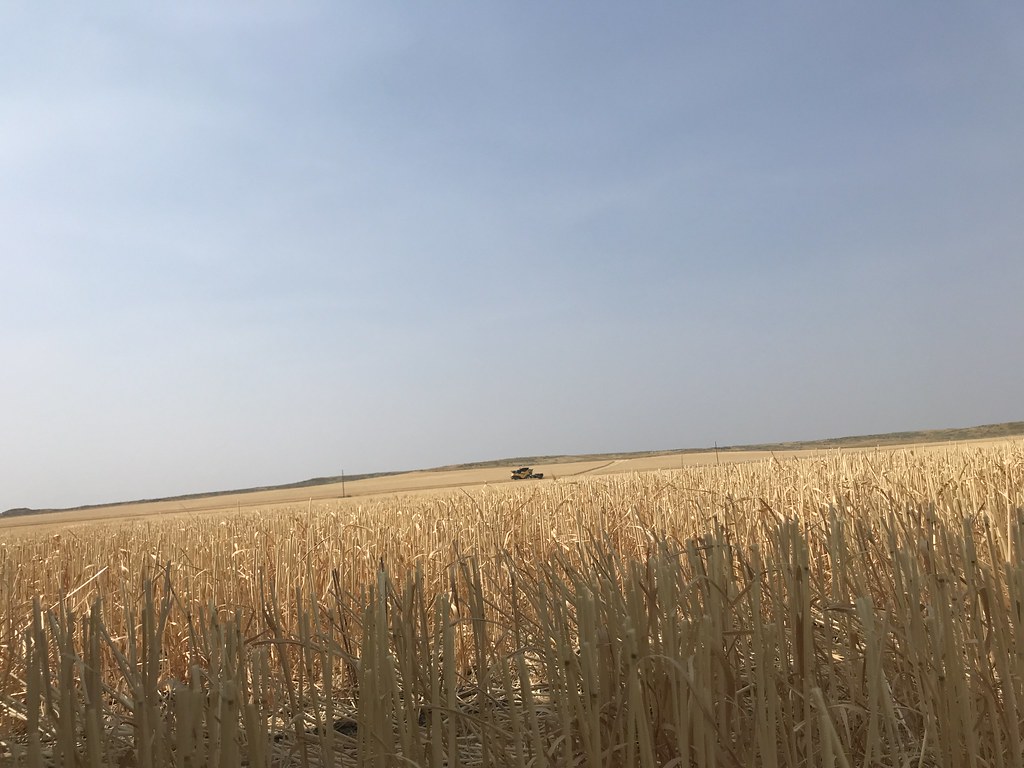 There she sits…waiting for a truck. Again, my view from the ground. Shade provided by Frank.

We actually finished with the acres we came to Jordan for a week ago tomorrow (8/16). I didn’t take a video or a picture of the last header-full of wheat. I don’t know why. Maybe because I just didn’t think it would be the last of 2018. I guess I was hoping it wasn’t going to be over. Not yet. 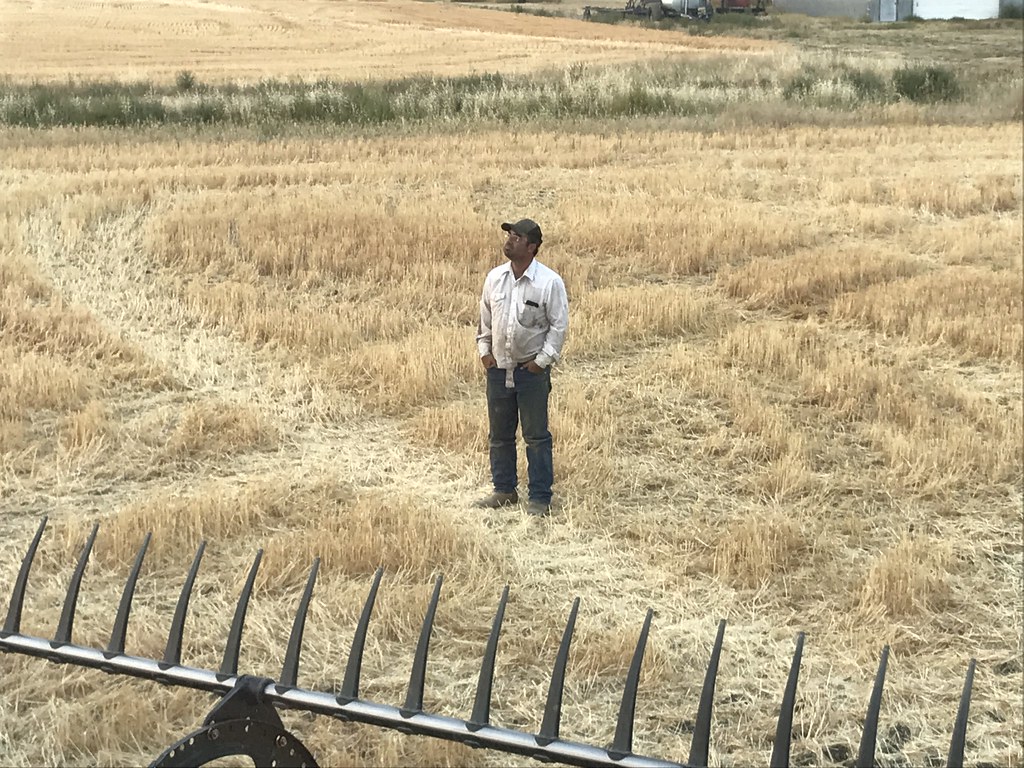 Ryan (a long-time family friend) came to the field and rode with me the entire afternoon of our last day. He enjoyed seeing the changes inside the cab of the combine. It had been a long time since he saw a new machine. The one that I loved showing him the very most was the auto steer and GPS. 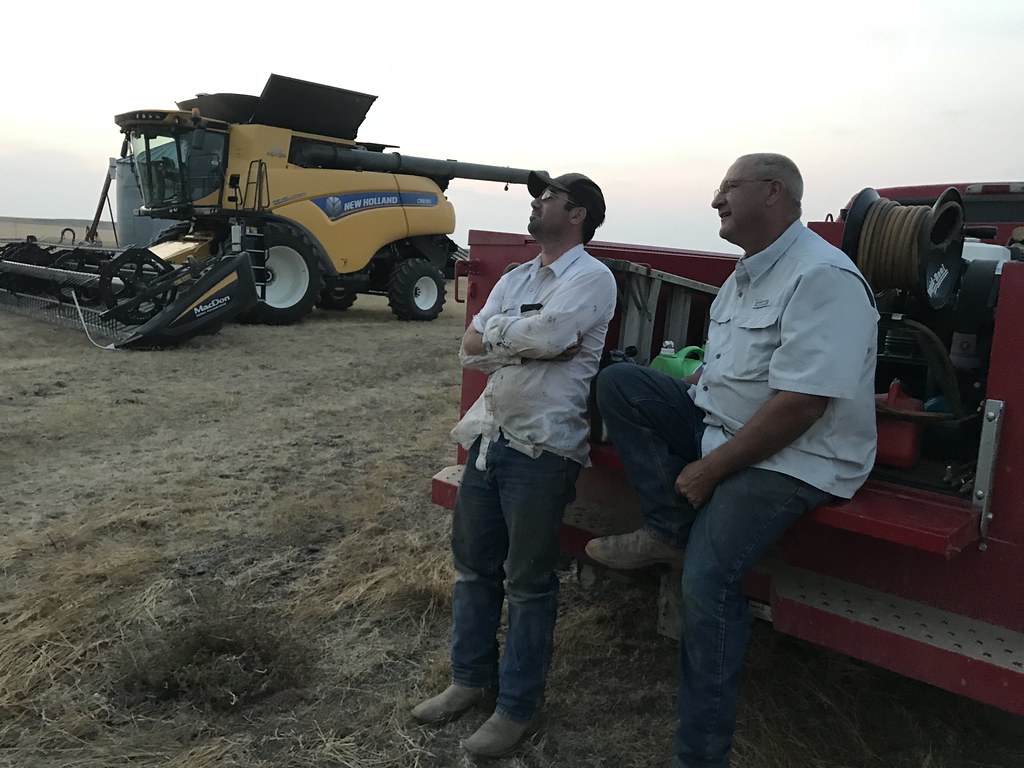 Jim and Ryan enjoying the coolness of the evening. Ryan’s dad, Charley, was the reason my grandparents cut wheat in this area for the first time in 1981.

We took the next couple of days to just catch our breath (it had been a pretty intense routine we had been repeating every day for three weeks) and to get equipment moved back to “headquarters”. On Sunday, we decided to take a drive to see about some acres that had been offered to us east of Wolf Point. After we arrived at the farm, we realized that even though we could use the additional acres, we didn’t think we could justify making the move for a couple hundred acres. We certainly appreciated the offer, though! 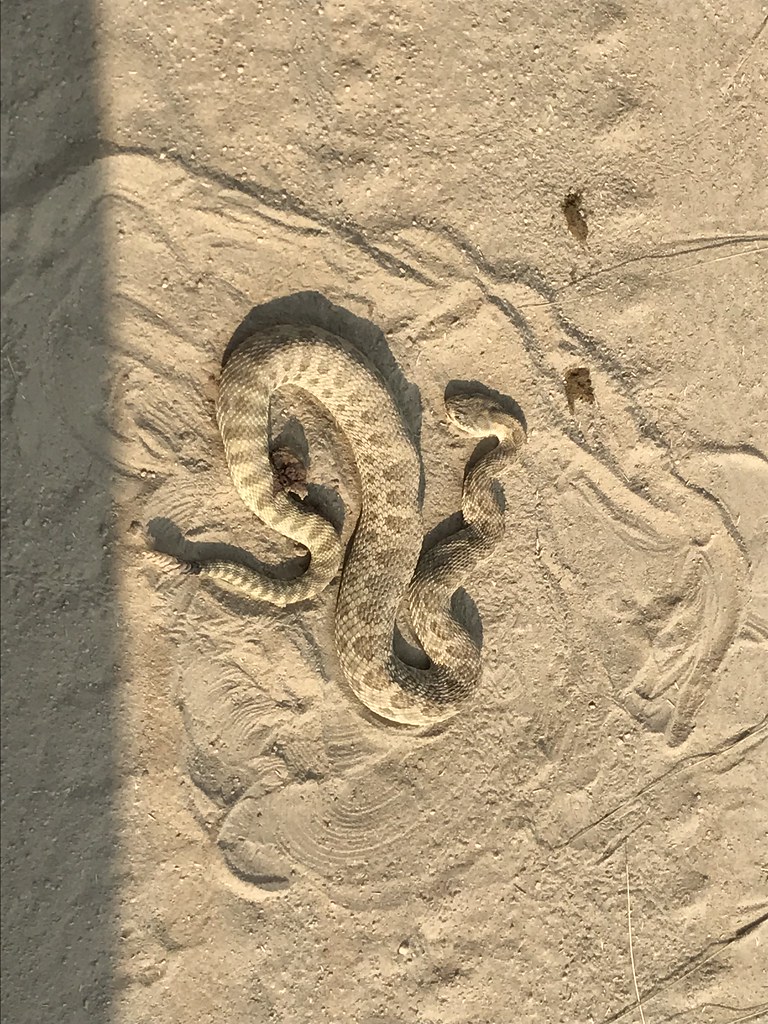 This guy met his match with a truck tire as we left the field the night before. Did I cut off his rattles for a souvenir? HECK NO! 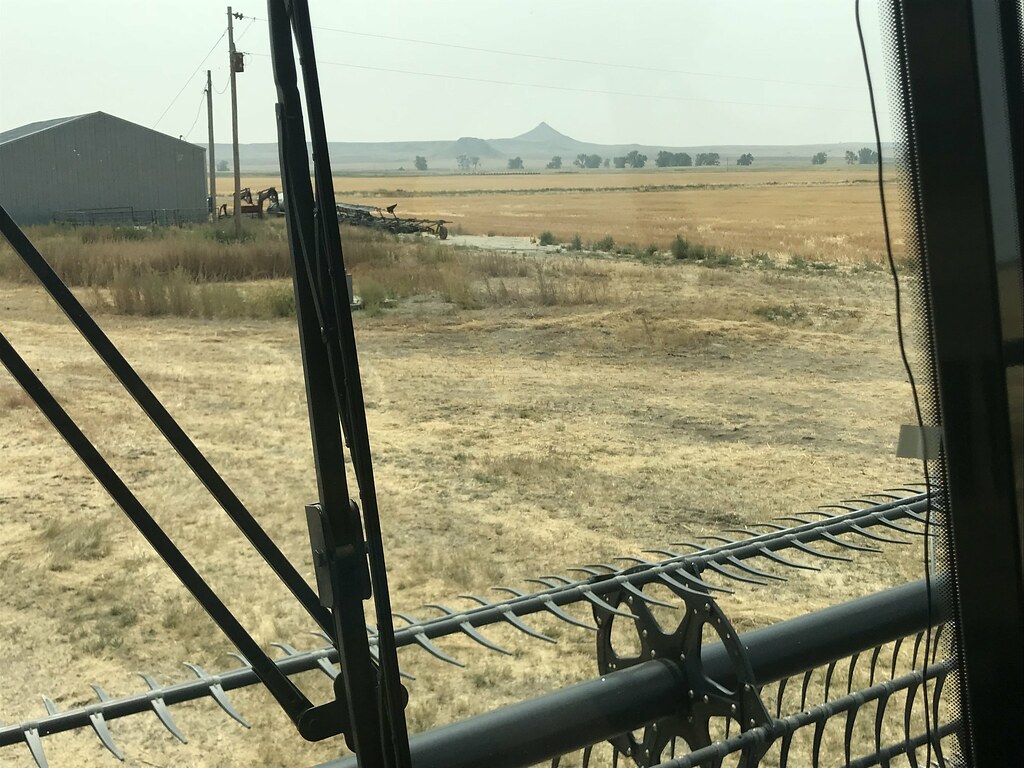 The last view of Smoky Butte from the cab before moving equipment back to “headquarters”.

After we left the farmyard and we arrived at the “T” intersection, we decided to make the left turn rather than the right. Decided it would be a good time to scope out the North Dakota wheat fields and visit fellow harvesters who were parked in Carpio. We hadn’t seen Kent and Dan since Garden City…quite a few miles traveled and acres cut since then. 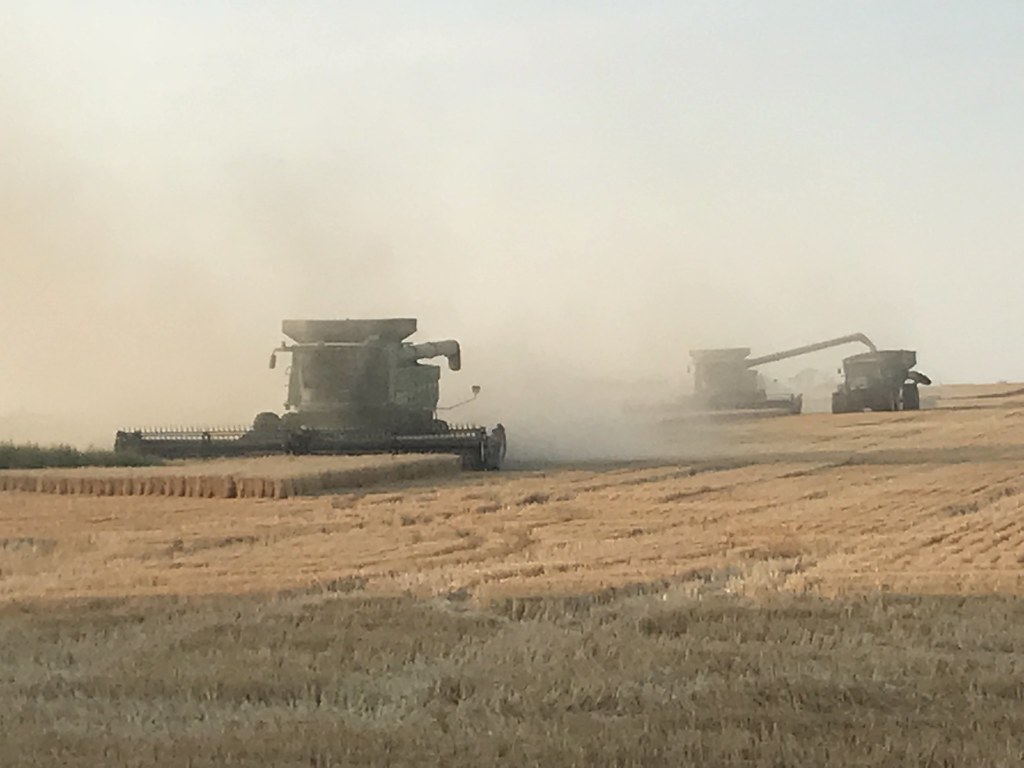 Once we arrived in Carpio, we found the crew in action – Braathen Harvesting. 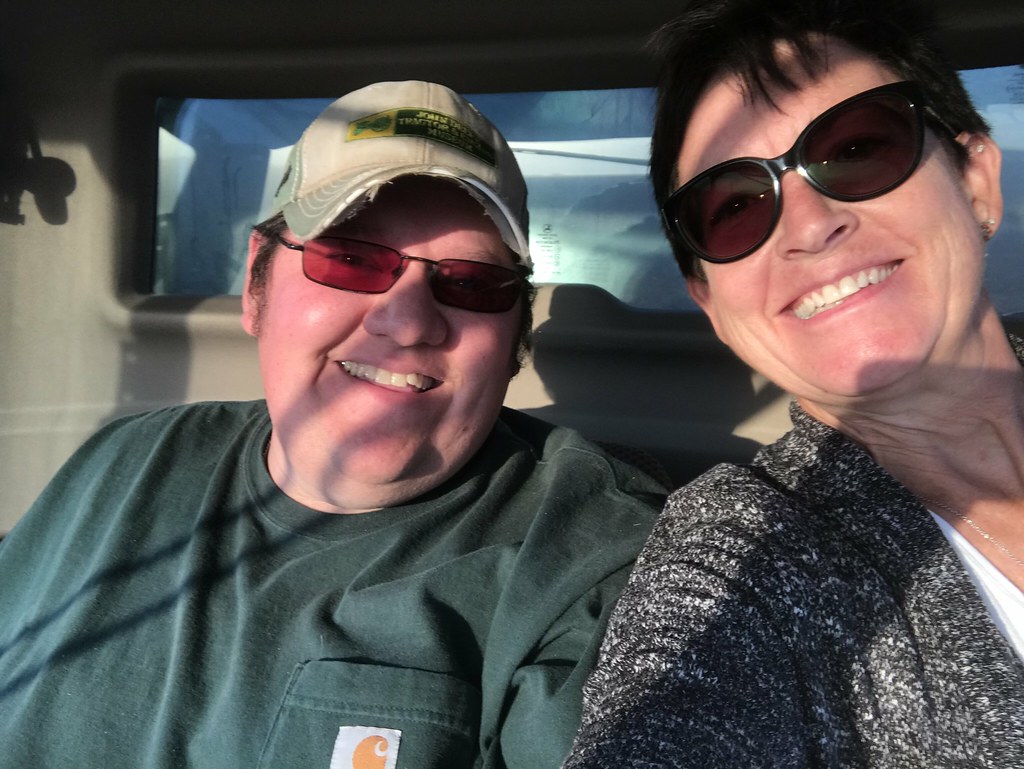 A combine selfie to prove to Dan’s family that we were, in fact, in the same cab together. 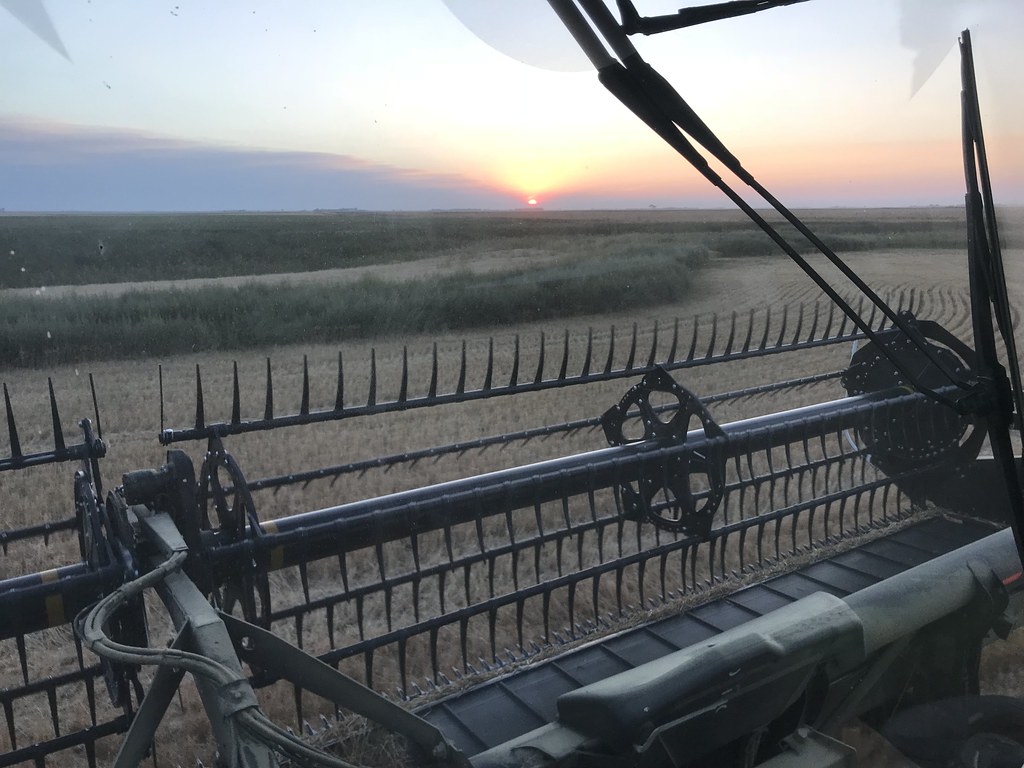 A North Dakota sunset…almost as gorgeous as Montana sunsets. 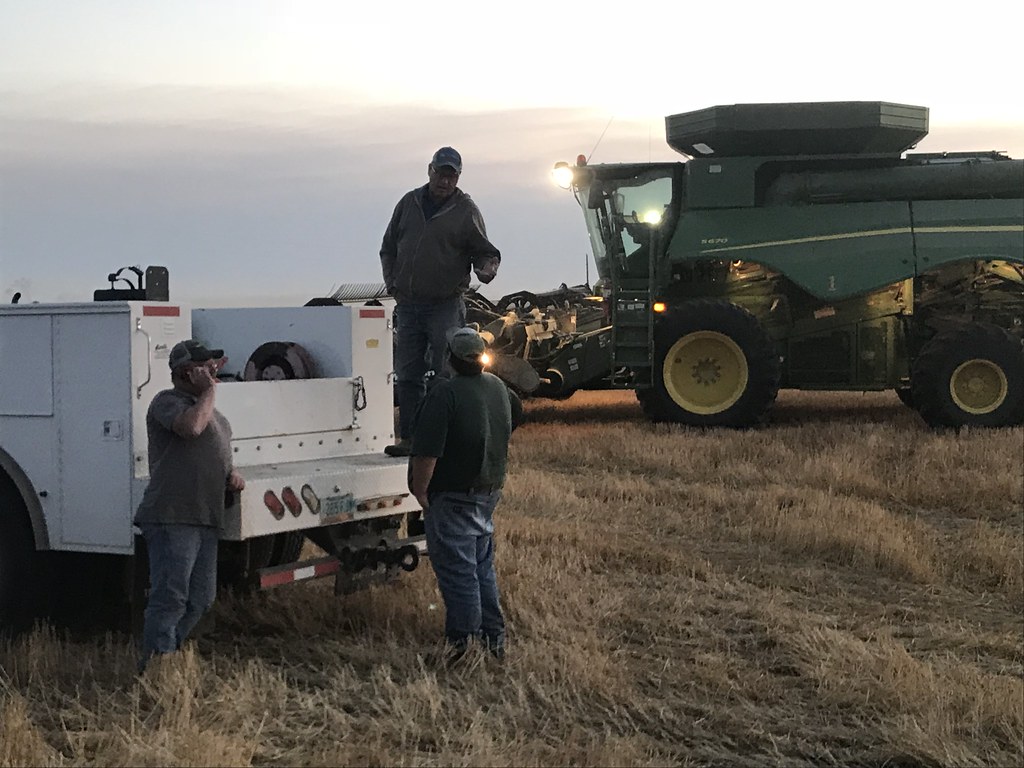 The end of the day – Braathen Harvesting – Kent, Dan and Jim.

My word!! The wheat acres between the border of Montana and Carpio were quite impressive! There was so much and it was so beautiful! You would think there would be enough to share with one machine. But in reality, those acres would be cut quite quickly once the combines started rolling. It was just so much fun seeing so many acres in one spot. 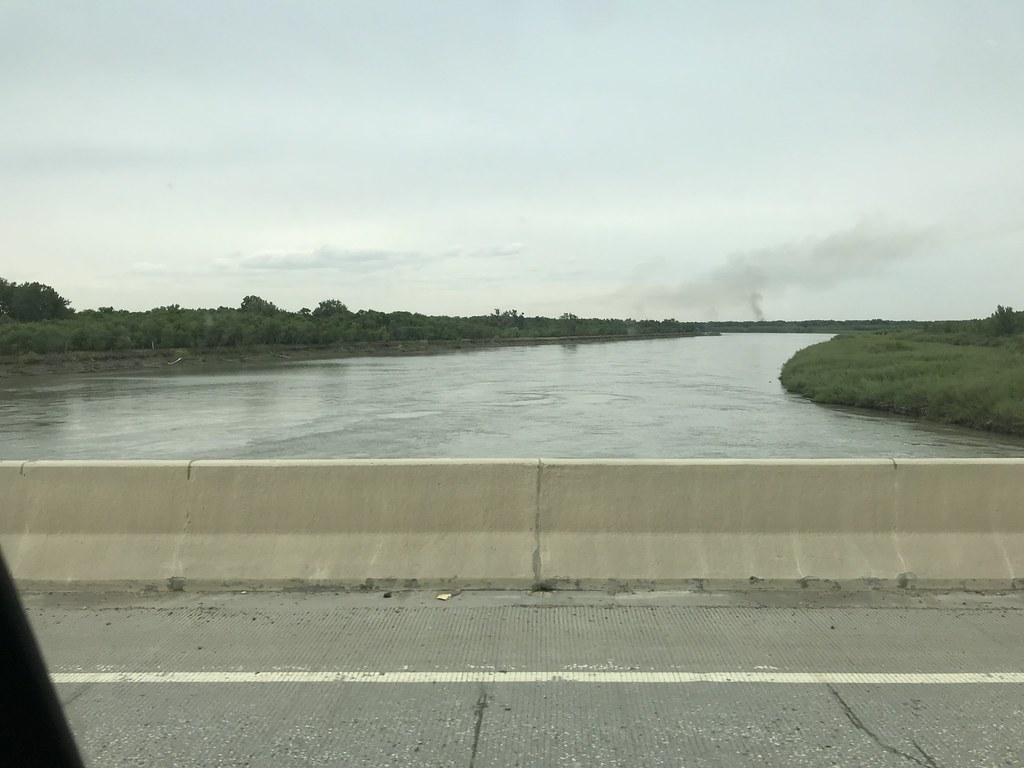 Crossing the Mighty Mo (Missouri River). Seems so weird to think this is the same water that flows along the edge of Eastern Nebraska.

Up till today, we had ourselves convinced there probably wouldn’t be any more wheat acres for us to cut. But, we wanted to check with one local farmer to see if, by chance, he would like a little bit of help before we made the decision to clean up and head for Eastern Nebraska. Good thing we did! We now have about three days more work ahead of us.  Woo Hoo!! 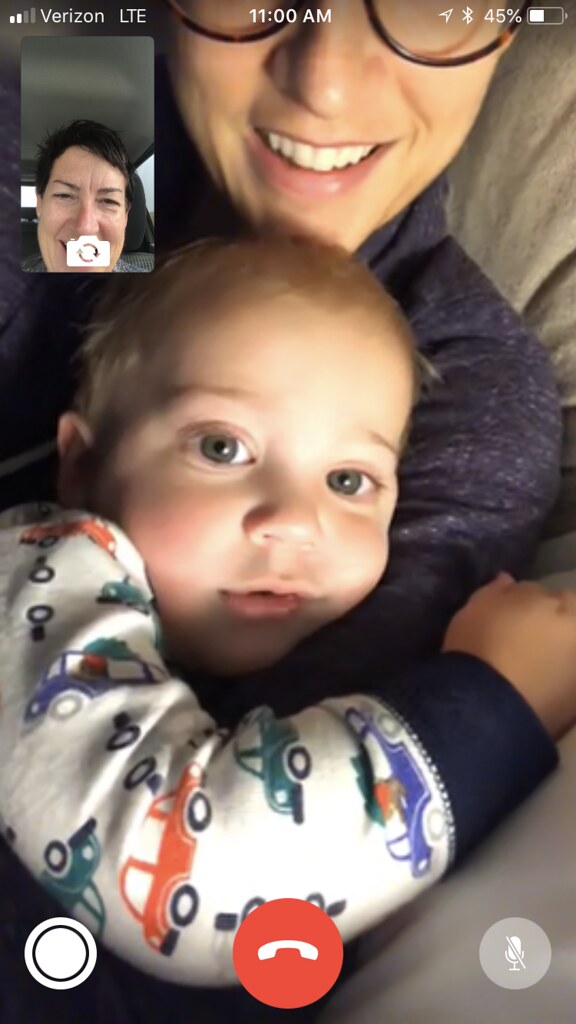 A little Facetime time with Jamie and Benny.

Three more days and then…I have to go through the whole “wheat harvest is over” letdown all over again. I really wish someone could explain to me why this happens to me every. single. year. Why can’t I be more like Jim and not have it affect me so intensely? When I crawl down that ladder for the last time, I know I will fight that feeling that happens every year. The feeling of knowing what I love, what has been our world for the past couple of months and the routine that I’m used to…is over.

Yes, the end of wheat harvest 2018 is in sight. Seems like it just began. And for us, it will be one of the shortest harvest seasons we’ve had. We left home with the first load on June 14 and started cutting wheat on June 17. As of today, August 22, we’ve been gone from home for 70 days.  In the past several years, we’ve been on the road for about 120 days. No wonder it seems like it just began. Harvest 2018…#itiswhatitis!