All Aboard Harvest | Tracy: A Walk Down Memory Lane
17558
post-template-default,single,single-post,postid-17558,single-format-standard,qode-quick-links-1.0,ajax_fade,page_not_loaded,,qode-theme-ver-11.2,qode-theme-bridge,wpb-js-composer js-comp-ver-5.4.7,vc_responsive

Tracy: A Walk Down Memory Lane

Manley, Nebraska – The waiting is sometimes the hardest part of anything.

And it’s no different for that first day of being on the road. But there’s no sense in getting in a hurry. The most common harvest quote and one I’ve heard since I was about 12 years old is “hurry up and wait.” It’s so true for pretty much all of what the harvest journey is about. 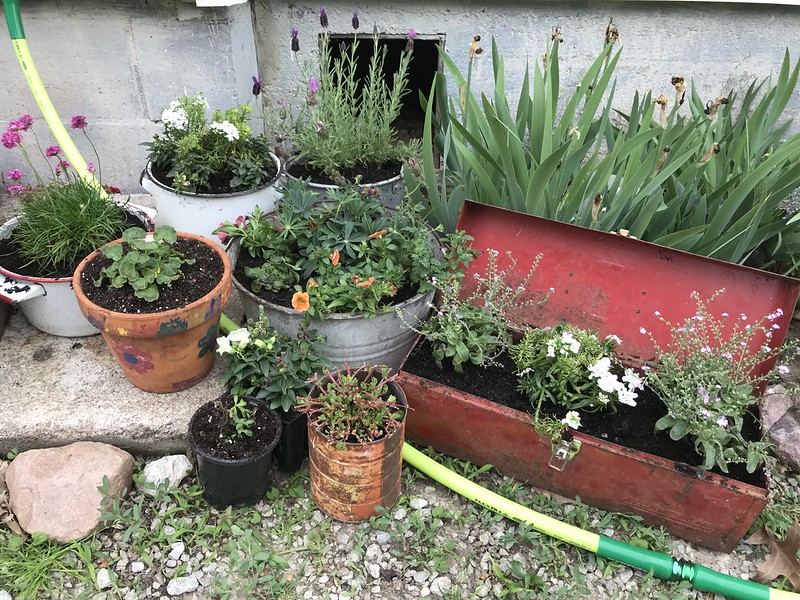 I planted my “traveling garden” last night … just before the rains rolled in, once again.

Yes, we’re waiting. Waiting on the wheat to ripen and waiting on the weather to straighten out. No one in the Central Plains needs to be reminded of what the past three months have been about—actually, since about January. We received way more snow this past winter than we have in a very long time. So, I’m guessing the weather pattern isn’t anything new for 2019. It’s just taking on a different form. However, I could do without the day-after-day reminders of what tornadoes and flooding can and will do.

Last night, Jim and I decided we’d make a trip to Omaha to get pizza for supper. While we were sitting there, this (mostly one-sided) conversation happened:

Me: “I know I need to write a post for the AAWH blog but I just don’t know what the heck to write about.”

I know he heard me. He’s probably just thinking about my dilemma while checking the weather radar again. I’m going to go with that.

We both sit there in silence.

Then … something came to me.

I have kept every calendar since we started this journey in 1990 as a family. As most of you know, harvest has been something that happened in my family since way before I was born. And, as luck—or God—had it, we continued the business in 1990 after both my dad and grandpa quit the previous year.

Me: “I think I’m going to pull out all of the calendars and, just for the heck of it, see when we’ve arrived at our destinations each year.” 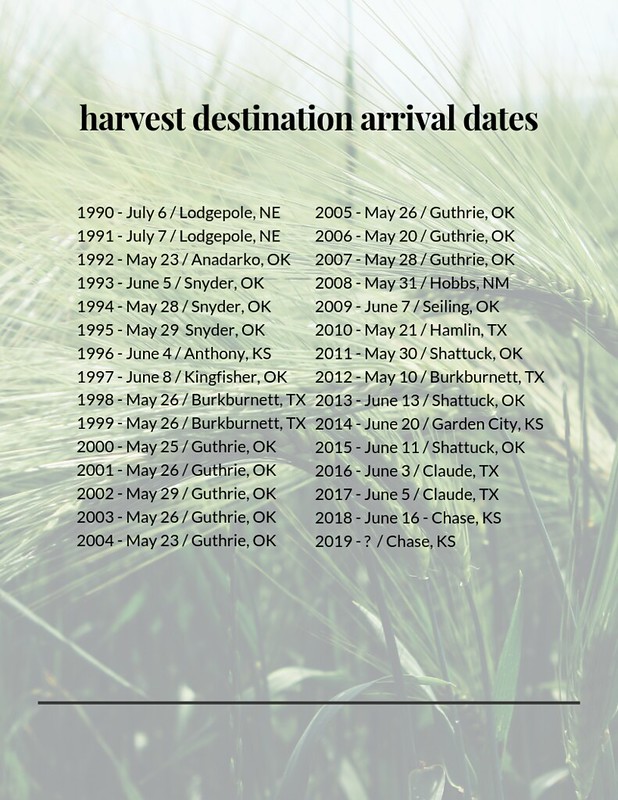 I remembered we were on the road over Memorial Day weekend quite a few times in our travels. I didn’t realize just how many.

When we got home, I headed for the basement and carried the tub full of calendars upstairs and started going through the past 29 years of harvest history. I was on a mission but I kept finding myself reading day after day after day after day of memories. Little notes written on each day was mostly all about harvest happenings. But it was also about life happenings … “Jenna lost her first tooth,” “Jamie drove the pickup from the field helping move equipment,” “Taylor fell down the steps in the camper in her walker,” “Pretty sure Callie has West Nile virus,” “Went to Sidney with friends for supper,” “Another rain day,” etc. The one that made me laugh the most was written by Taylor, “I hate mom … love, Taylor.” That’s a true love hate statement there! 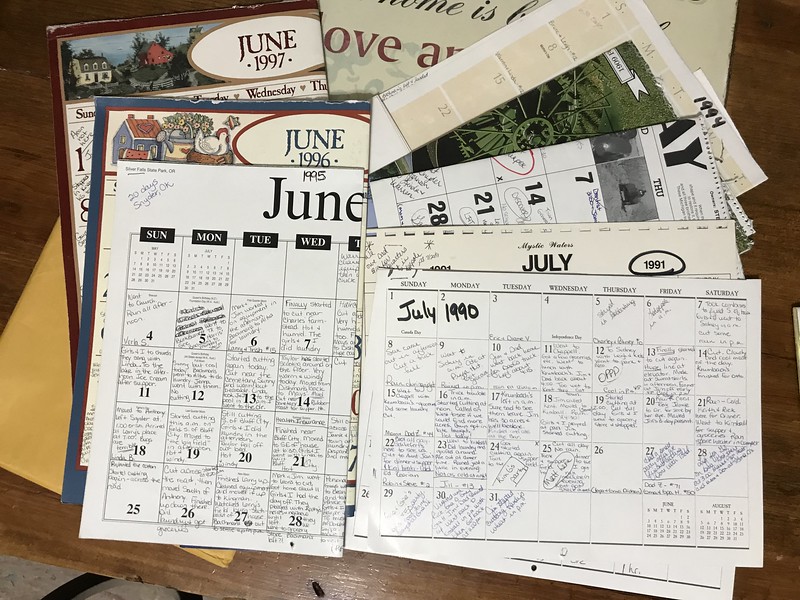 Thirty years of just a quick daily diary. Who would have thought back in 1990 these would be so much fun to read and relive?

The years have slipped away pretty darn quickly. Going through this “time capsule” was way more fun than I ever anticipated it to be. I realize I don’t write nearly like I used to when the girls were with us. Maybe it’s time to change that. Someday, they may enjoy reading what the heck their folks were up to while they were back in Nebraska living their “life happenings”. 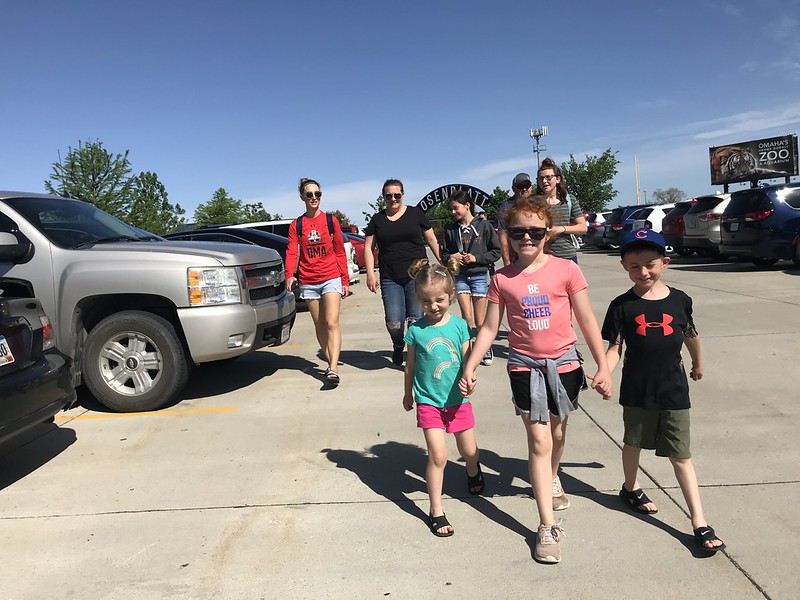 If you ask any harvester, “What is your favorite part of doing the job?” they will likely reply, “The people you meet.” We met Tracy’s family so many years ago. Jamie and Tracy were part of a whole group of little kids that would play all day long while the adults did what needed to be done. When it was time to pick up camp, they knew they may not see each other again for a whole year. And when they did, they would pick right back up where they left off the previous year and do it all over again.

And then they grew up.

Tracy’s folks quit traveling the harvest roads in 2000. But Jamie and Tracy remained friends. Jamie was Tracy’s maid-of-honor in her wedding, which also happened to be the same weekend as homecoming. Jamie was up for homecoming queen but she knew the right thing to do would be in Kansas celebrating her best friend’s wedding.

They continue to see each other at least once or twice a year. This year, it happened and we were still here! So, I was able to tag along to the zoo and enjoy time with everyone. So much fun watching the little kids play together while the big kids talked about life.

The best part about harvest? It’s the people you meet…110 percent! 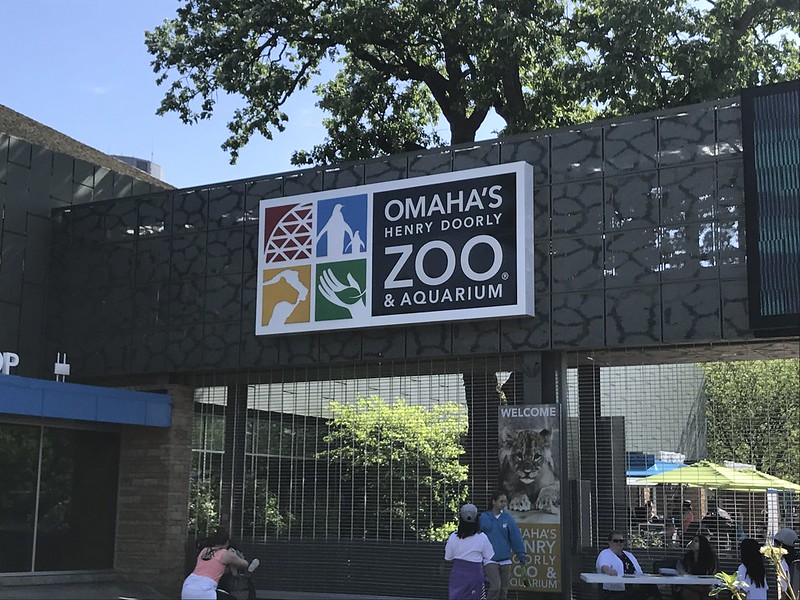 Heading into the gates. There were so many people there on this particular day but the zoo is so large, you didn’t notice … much. 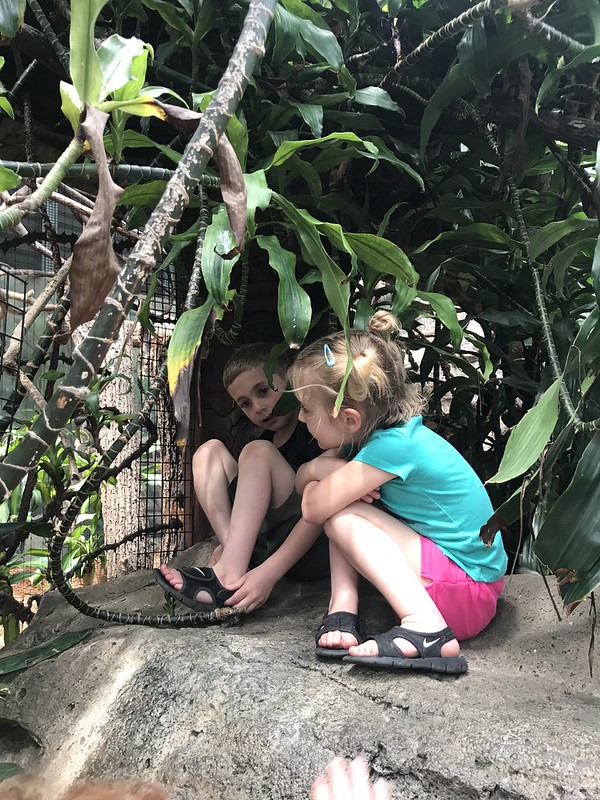 Eli and Nora found the perfect place to sit and watch the animals. 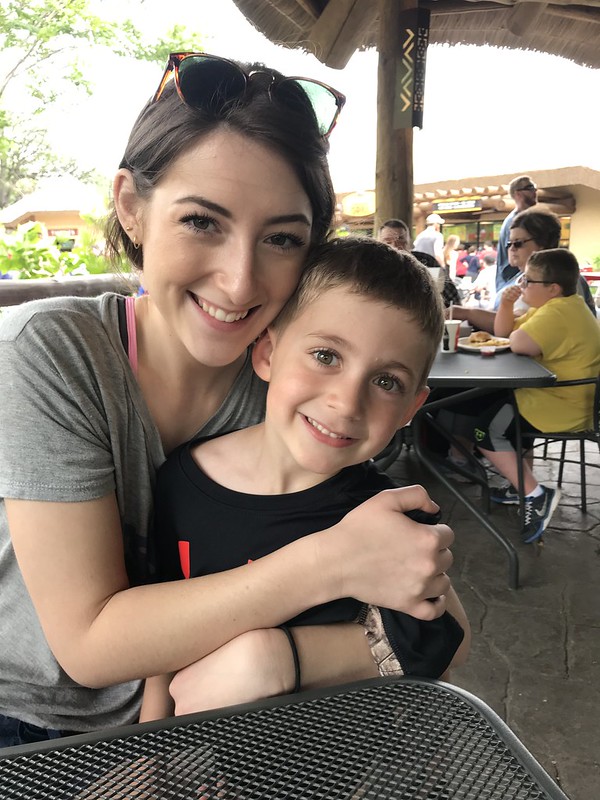 Aunt Coco (Callie) met us there. 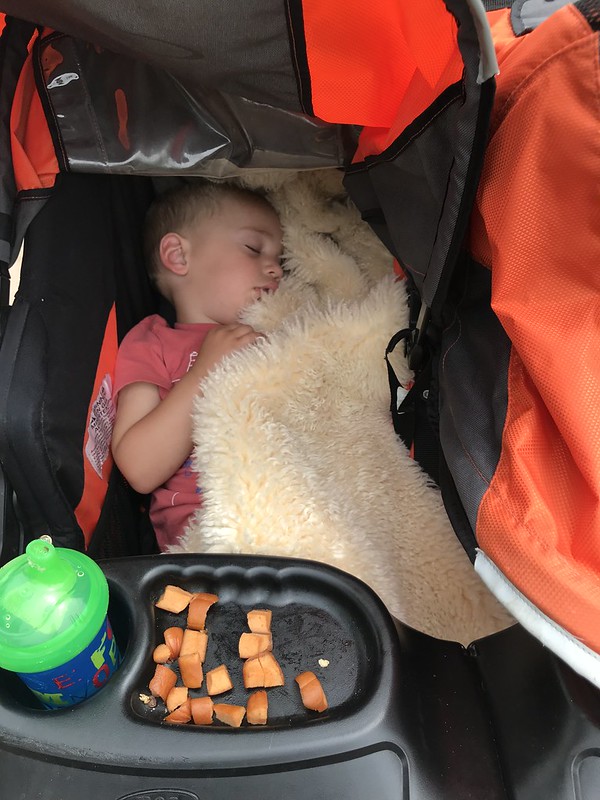 Ben took a nap while the others jumped on the train and made their way on the express route through the zoo. 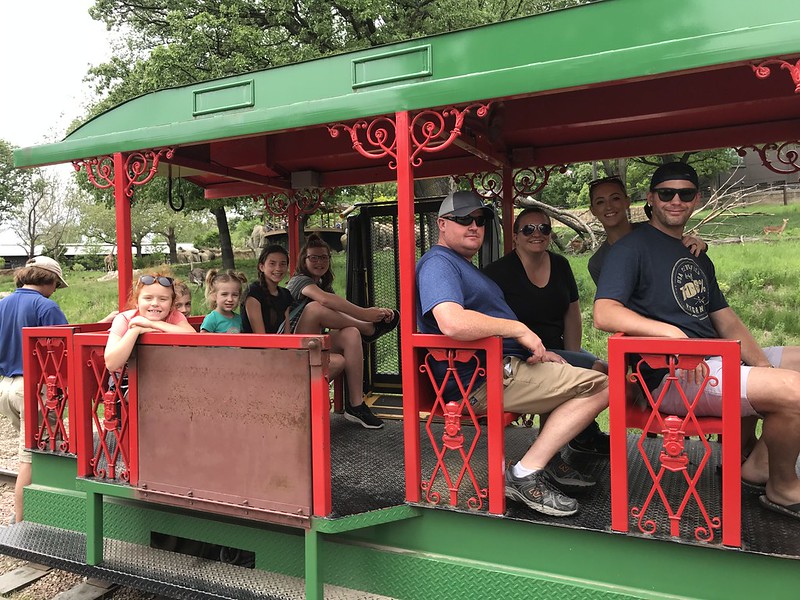 A friendship that began so many years ago, in an RV park somewhere along the harvest journey, remains today. 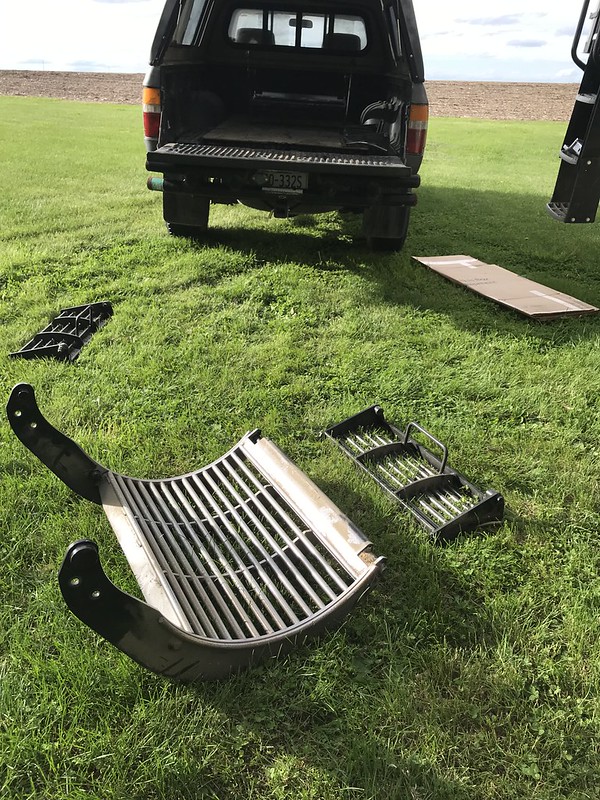 Concaves needed to be changed. The large tires on the combine create a difficult scenario for doing this alone. So rather than the two of us awkwardly trying to make this work, Jim devised a plan. 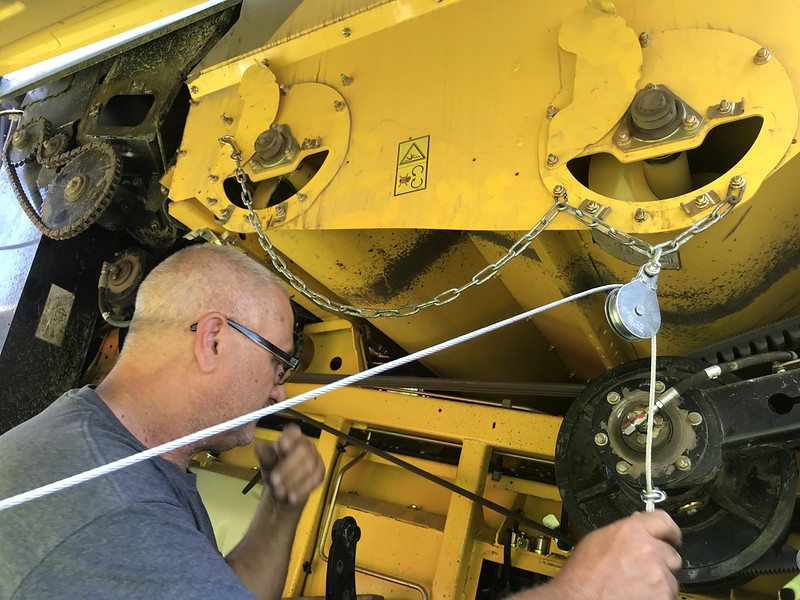 Step 1: Connect the chain to the combine and the pulley to the chain. 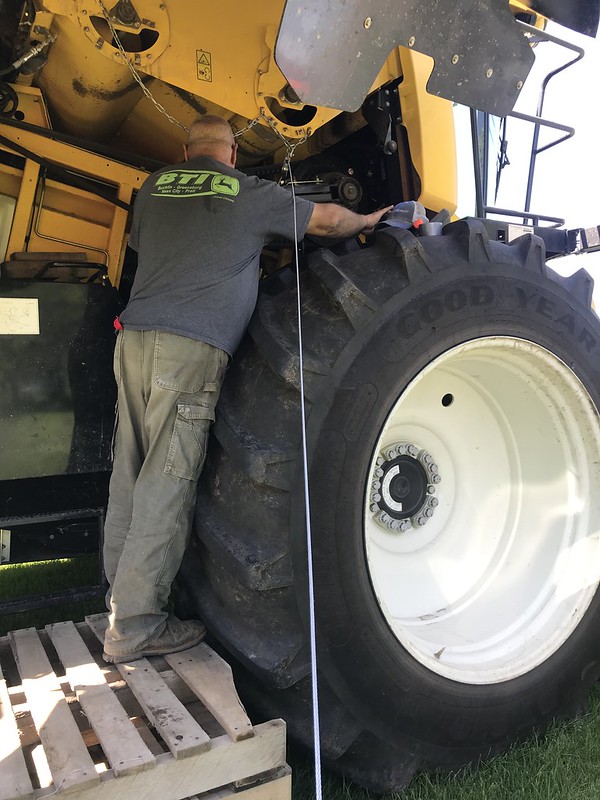 The other end of the pulley is attached to the hitch on the front of the service truck. 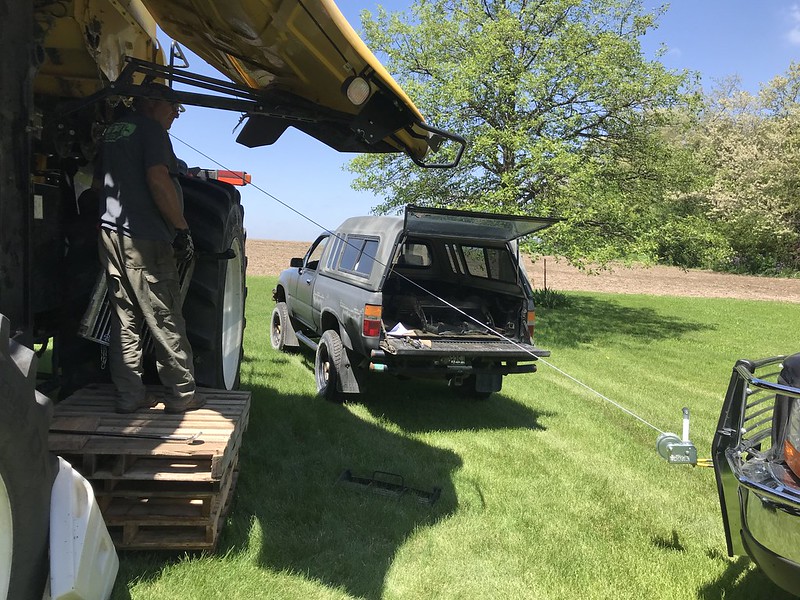 Here’s a picture of the full effect. 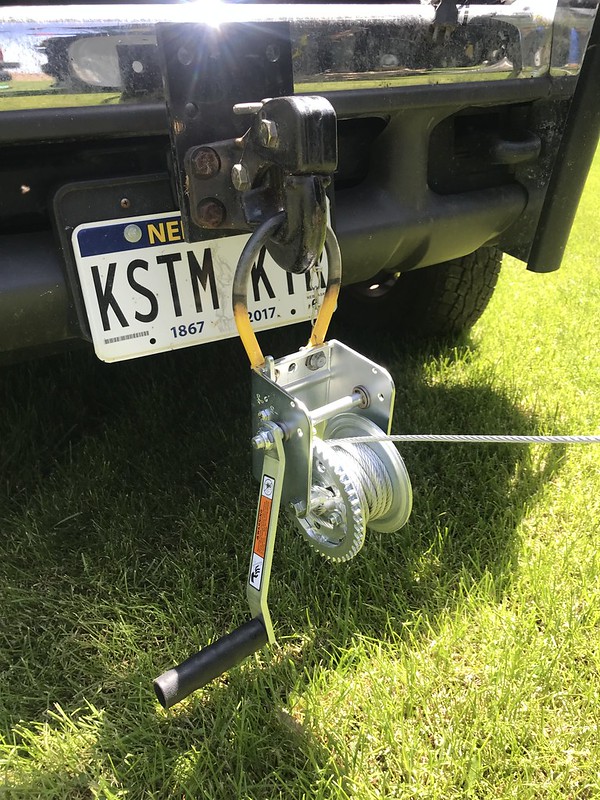 Pulley attached to the service truck. I was in charge of cranking the pulley handle—tough job but someone’s got to do it. 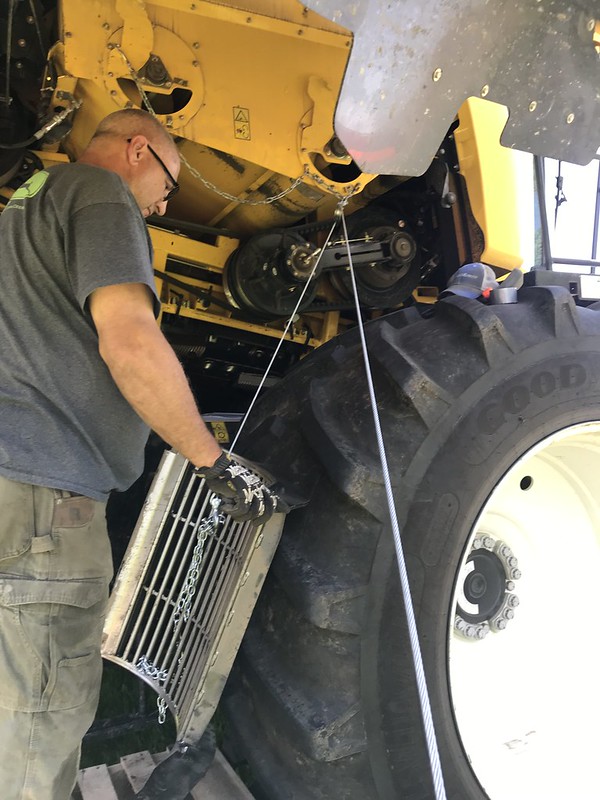 Step 2: As I was cranking the handle, Jim was easing the concave down the tire. 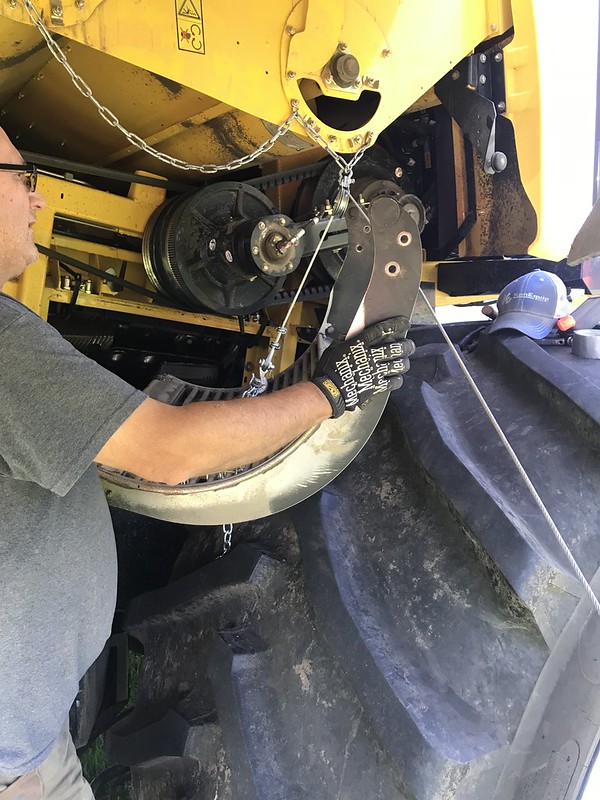 Step 3: When the concave gets to a certain point, it’s wiggled into the area it needs to be. (The concave in the picture is actually the one we were replacing.) The pulley is released of all tension and the cable is removed from the chain/concave. At this point, the person cranking on the handle is relieved of all duties while the other one continues the job. 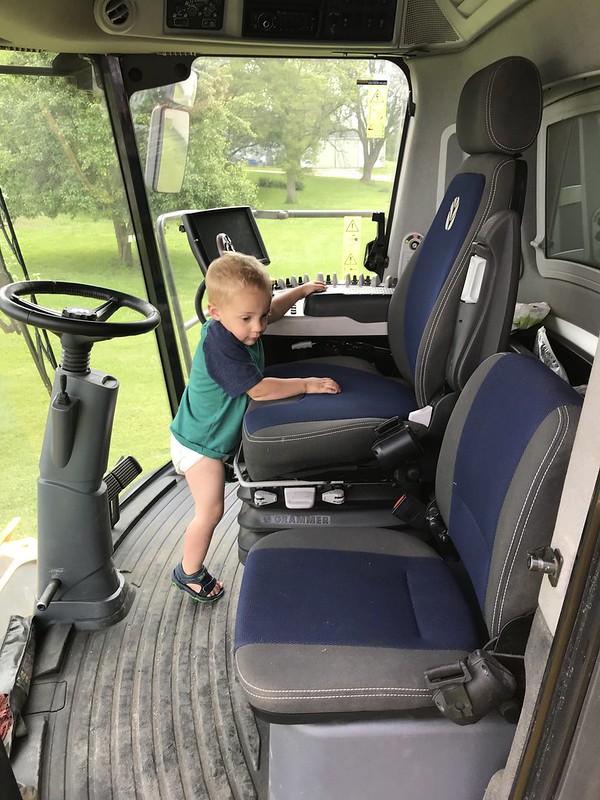 We had visitors on Saturday afternoon. They came mostly to say hello to The Beast. 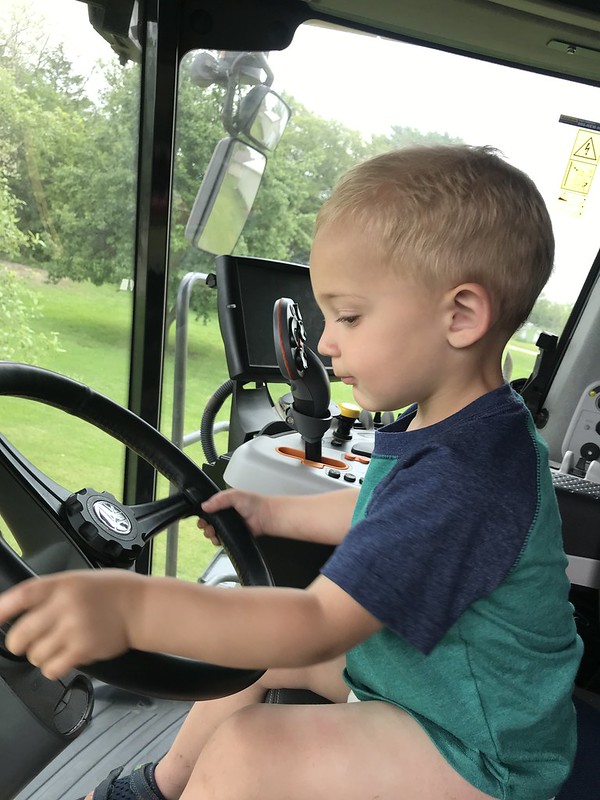 He takes his combine driving rather seriously. (It was parked.) 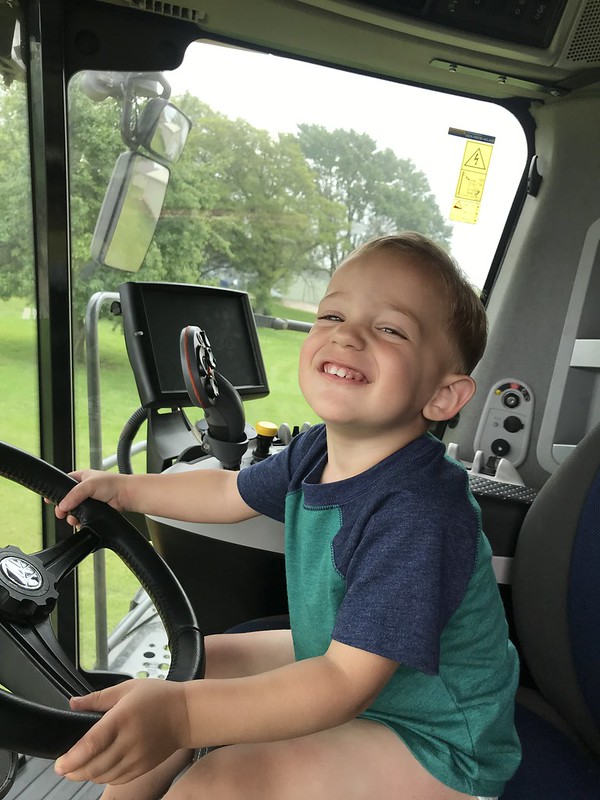 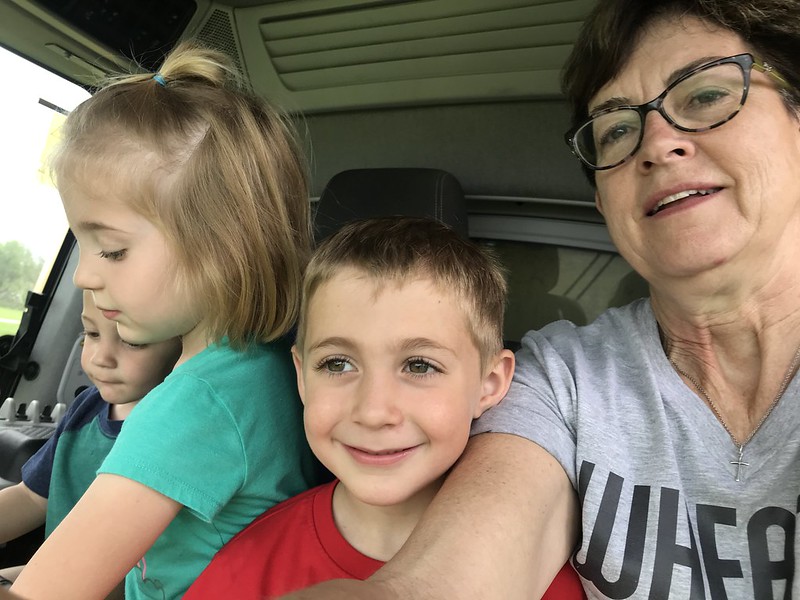 We had a cab full! All wanted to drive and a couple wanted to clean. Ben wasn’t letting anyone drive! 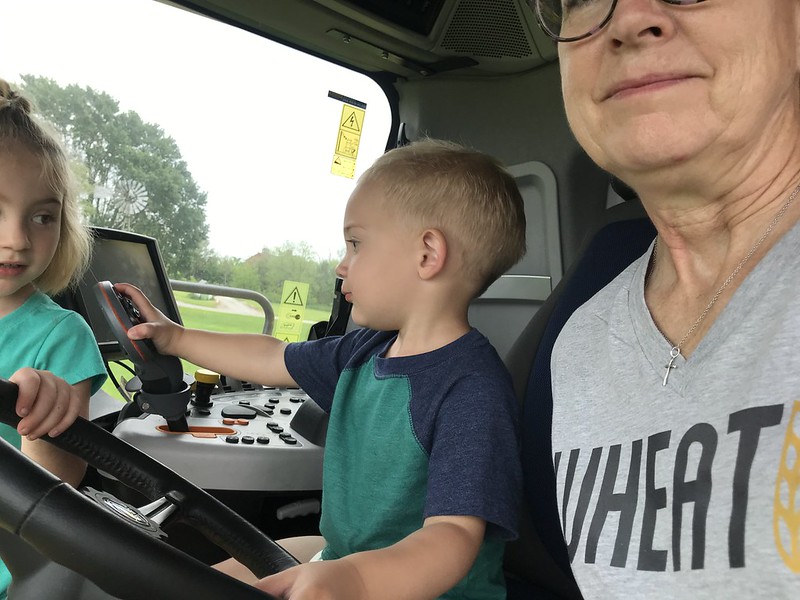 As I said, he takes this very seriously. 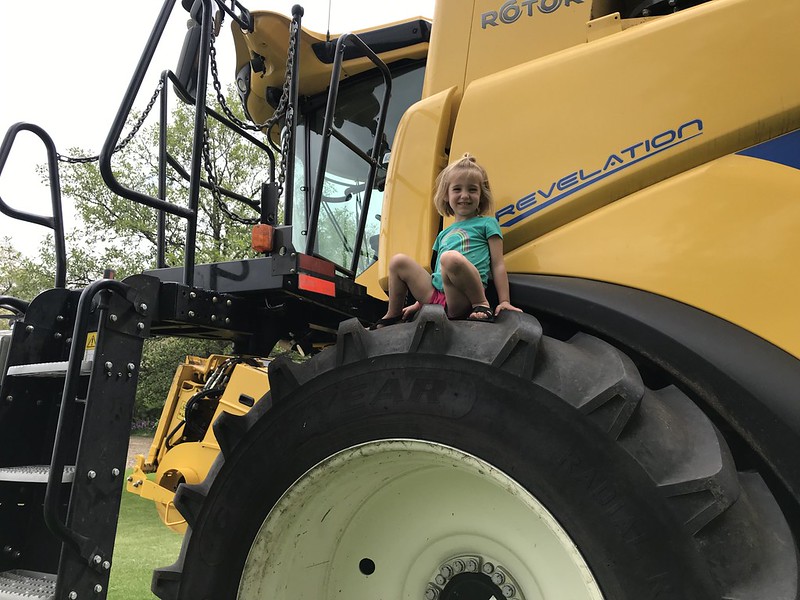 Until next time … “A strong friendship doesn’t need daily conversation or being together. As long as the relationship lives in the heart, true friends never part.”—Auliq Ice.