All Aboard Harvest | Tracy: The chaff is a blowin’ and the wheels are a goin’
17920
post-template-default,single,single-post,postid-17920,single-format-standard,qode-quick-links-1.0,ajax_fade,page_not_loaded,,qode-title-hidden,qode-theme-ver-11.2,qode-theme-bridge,wpb-js-composer js-comp-ver-5.4.7,vc_responsive

11 Jul Tracy: The chaff is a blowin’ and the wheels are a goin’

Garden City, Kansas–Crazy how fast the past two weeks have gone! We left home, arrived in Chase, cut every day and have moved to Garden City. If it wasn’t for my calendar, I’m certain recalling dates of when things occurred just wouldn’t or couldn’t happen.

We began our 2019 harvest adventure on June 24. By the time we said our goodbyes to the kids, threw our last-minute stuff in the trailer house and locked the door on our home in Manley, it was 4:30. Yes, we were setting up the “cottage on wheels” in the dark. Way to start the season! 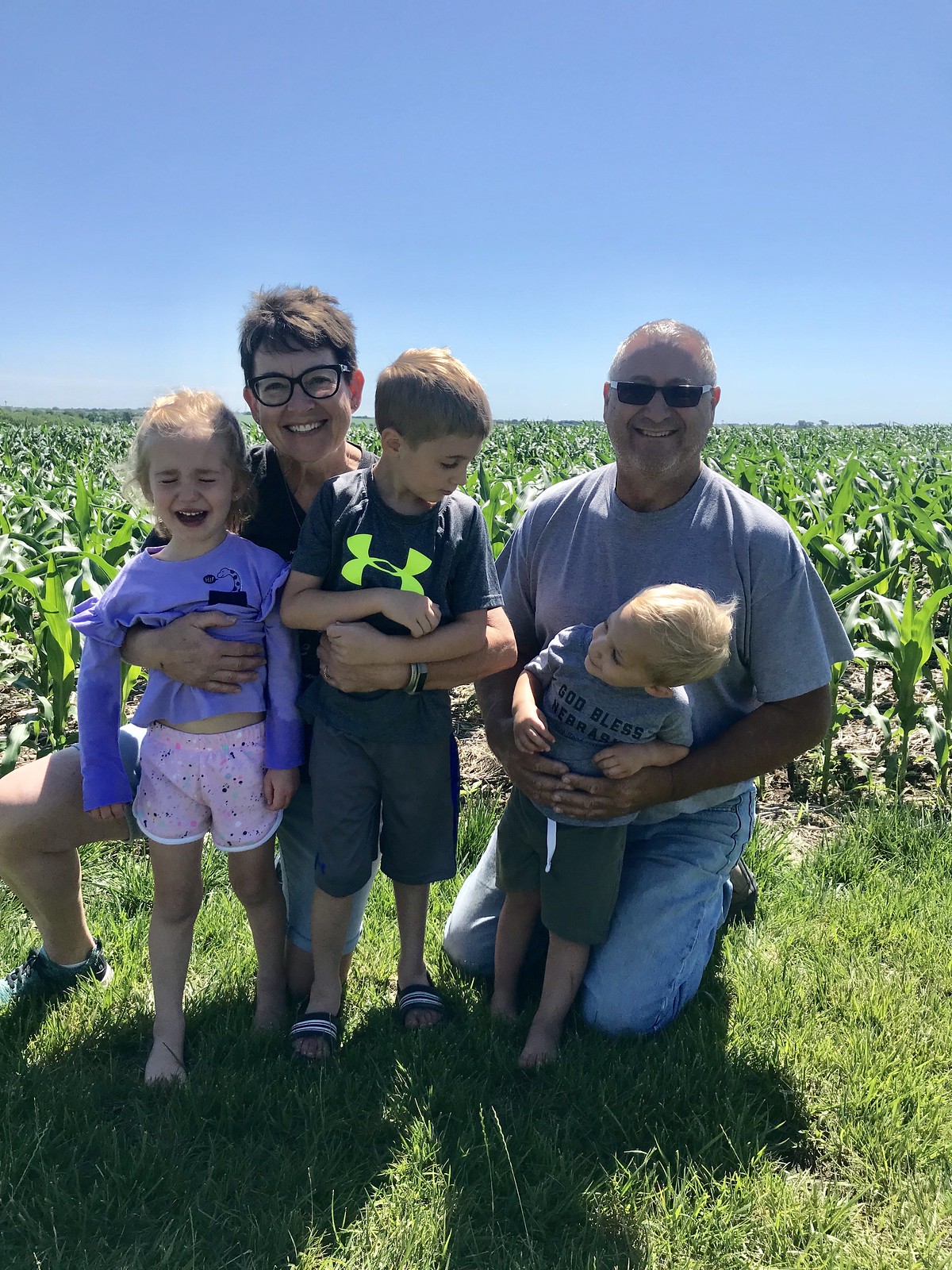 Our final goodbyes and picture with the grand kids before heading south.

We spent the next day preparing equipment for the field and getting the Combine Cam installed. I figured by the looks of all the sitting water, we wouldn’t be starting for several days. I was wrong! The very next day, June 26, we got started and never quit until the evening of July 1.

Once we got rolling, there was no stopping us. The cutting conditions were perfect – hot, hot, and hotter. And, oh my goodness! Once the sun set, the army of mosquitoes began swarming and were so hungry. Thank goodness the bug spray we bought kept them from snacking very long. We were crawling into bed each night about 1 a.m. 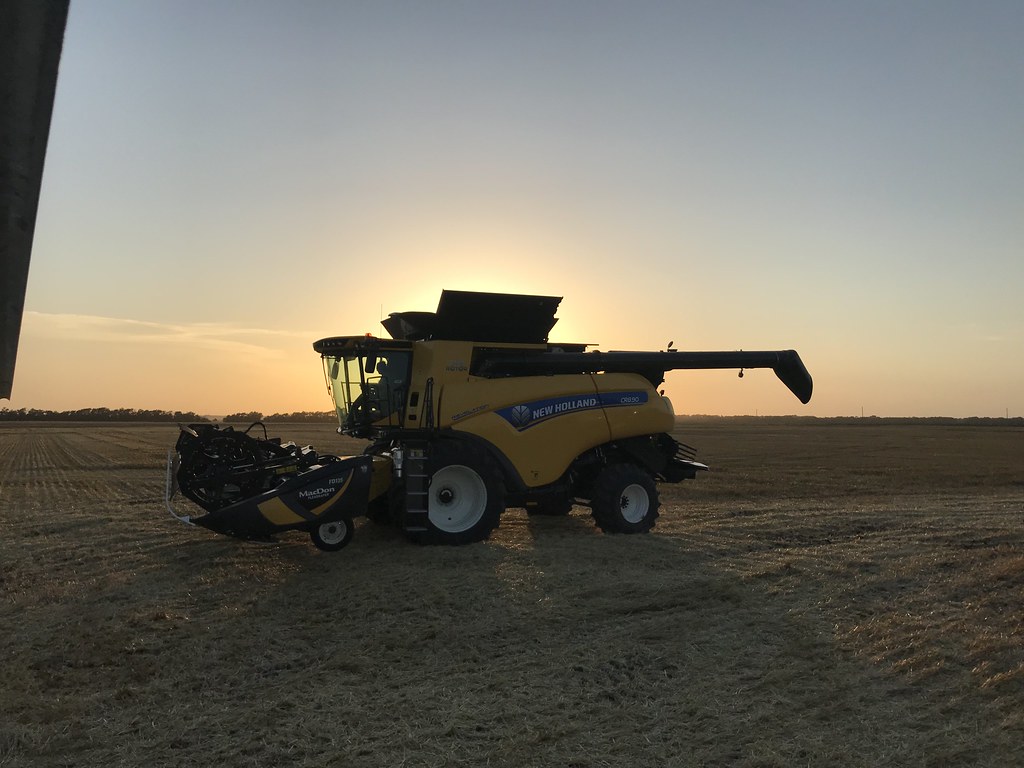 Just a guy and his combine—Chase, Kansas. 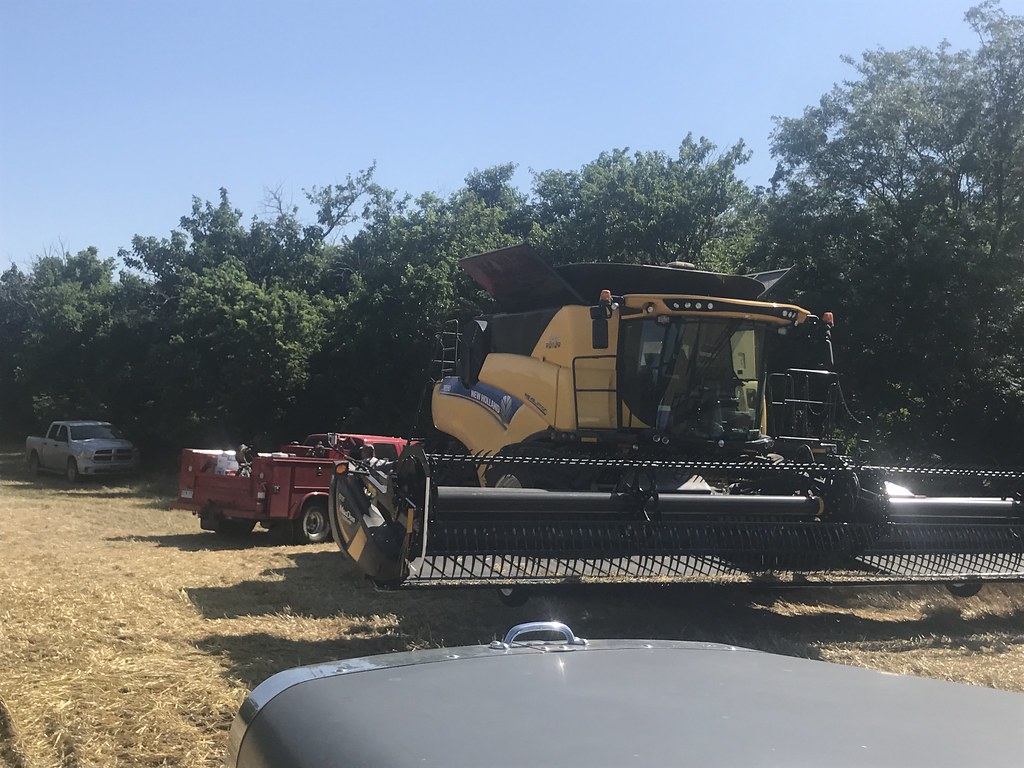 Stopping to put fuel in the combine due to a mistake made earlier that morning. 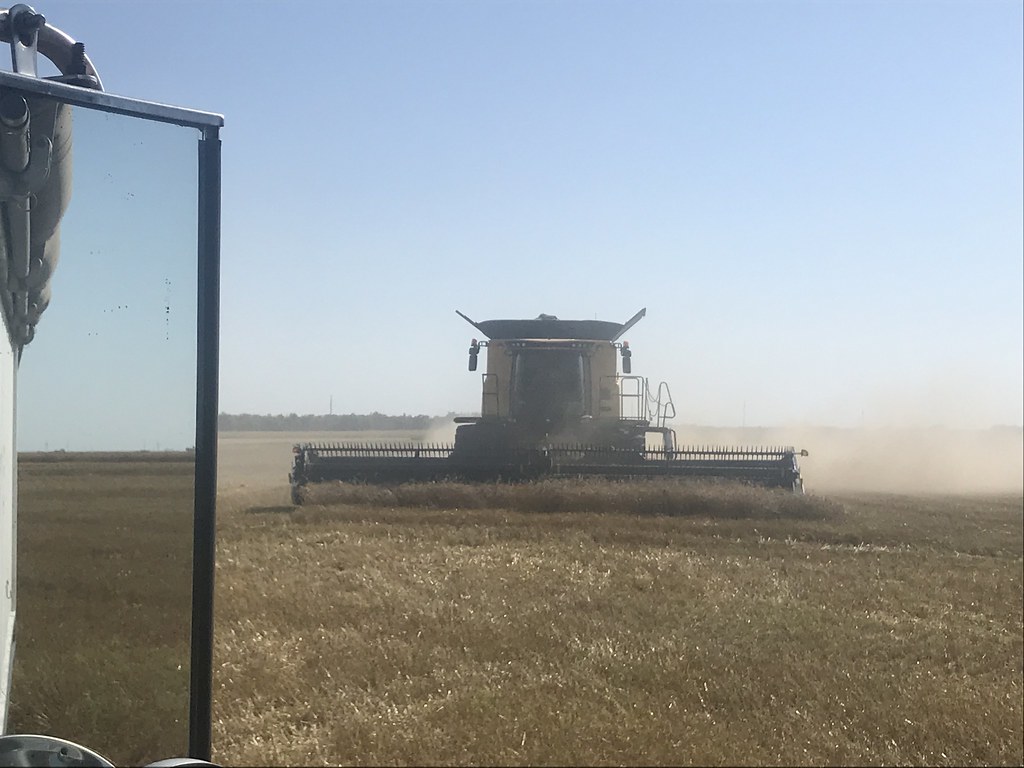 Not sure if there’s anything I can say about this picture that you can’t figure out. 🙂

Because the threat of mud and burying the combine was very real, Jim was combine operator while Frank and I became better acquainted again. I admit, I was a bit disappointed when I realized I wasn’t going to be behind the wheel of The Beast but if the combine was going to find mud, it would be better if Jim was the one to find it and he did. 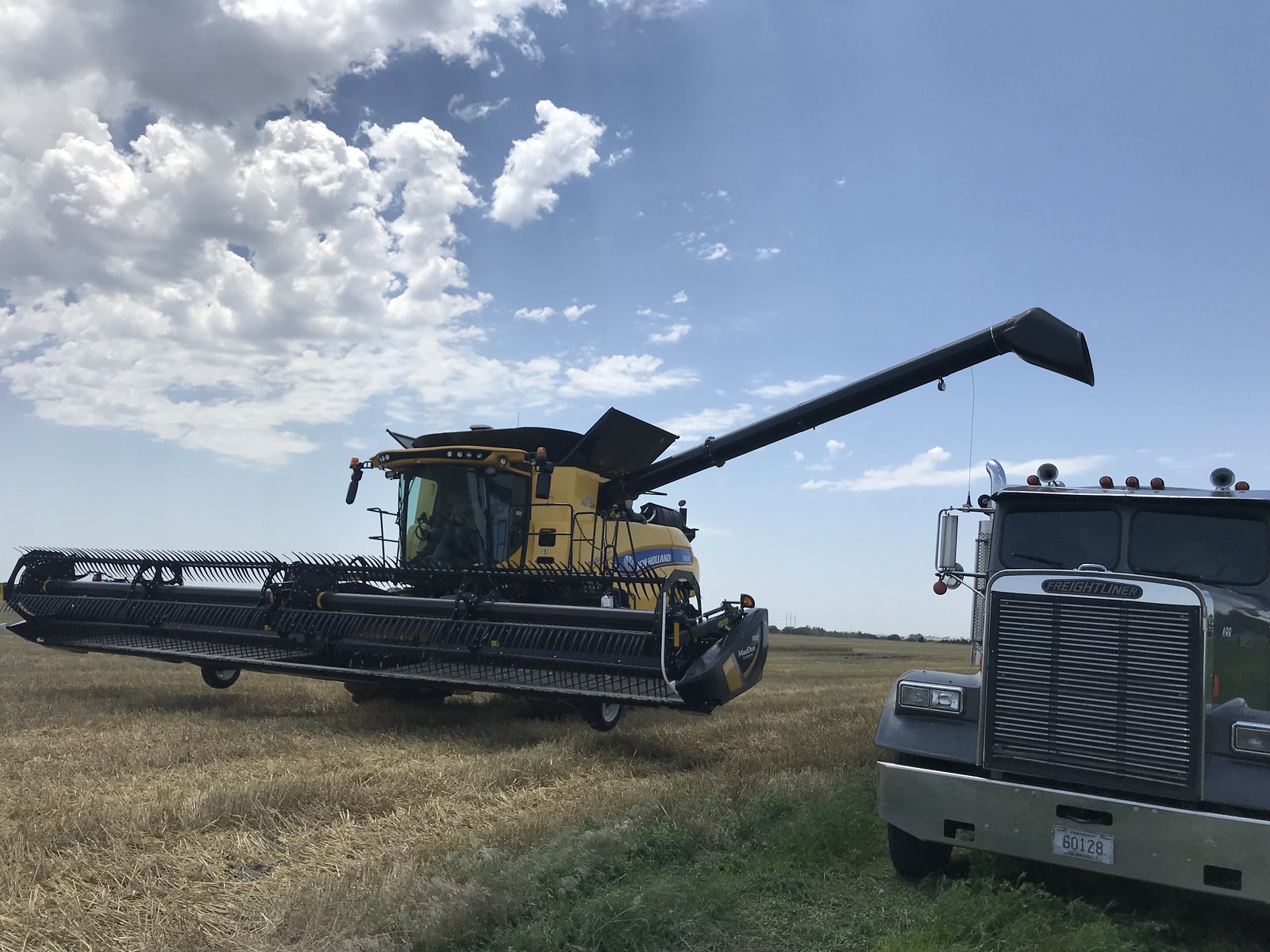 As it worked out, I thoroughly enjoyed being the truck driver at this stop. I had fun getting to know the guys at the Chase elevator. They were like a well-run machine … talk about efficiency! I honestly believe that out of all the players in this game called harvest, the guys who stand at the pit and dump the trucks have got the worst position. However, they were always there waiting for the trucks, enduring the heat and dirt and still seemed to have a smile on their face when I pulled up. Many thanks goes out to these guys for the many hours they put in during harvest. And for putting up with all of us truck drivers! Kudos for a job well done! 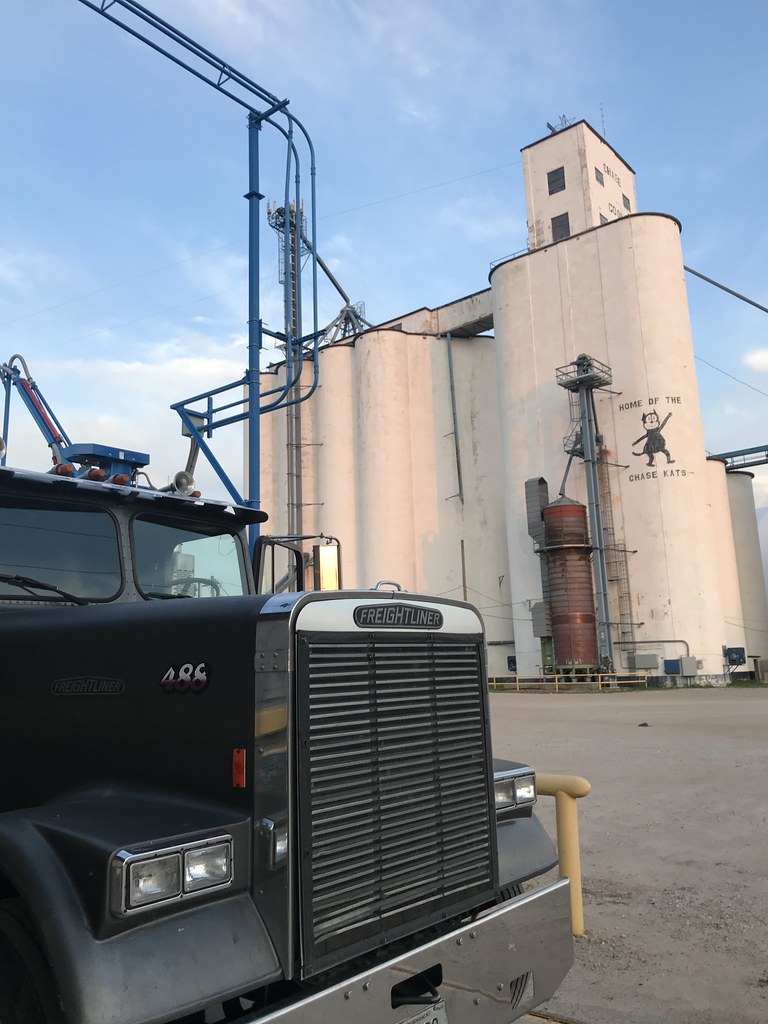 First load of the season! 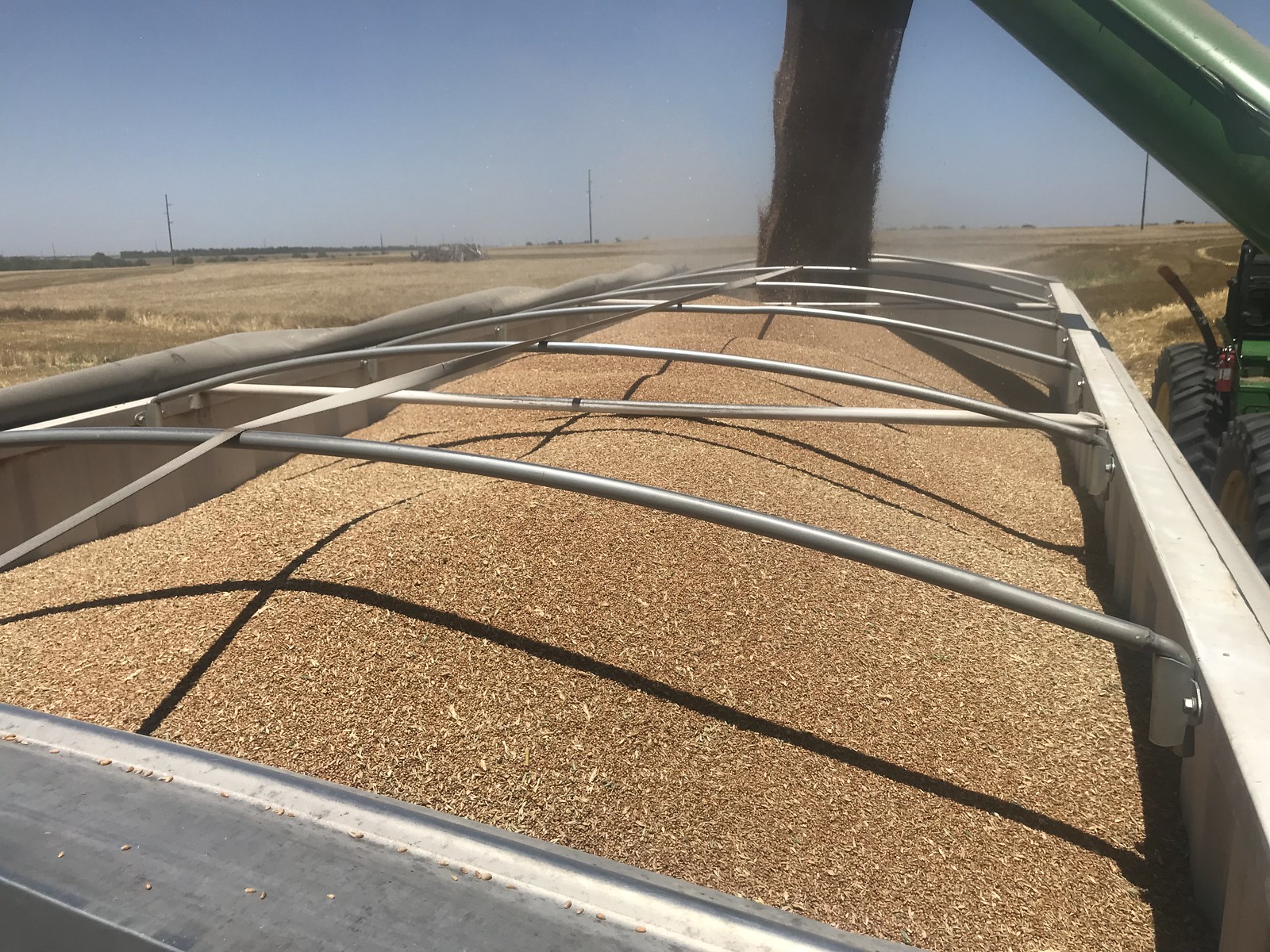 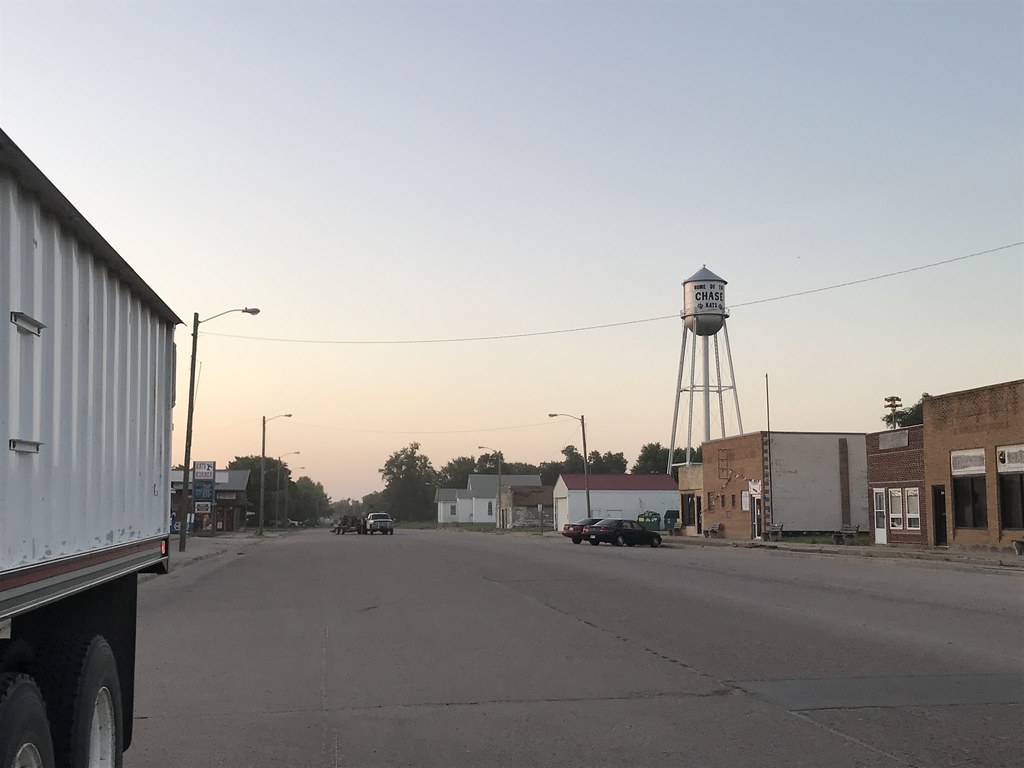 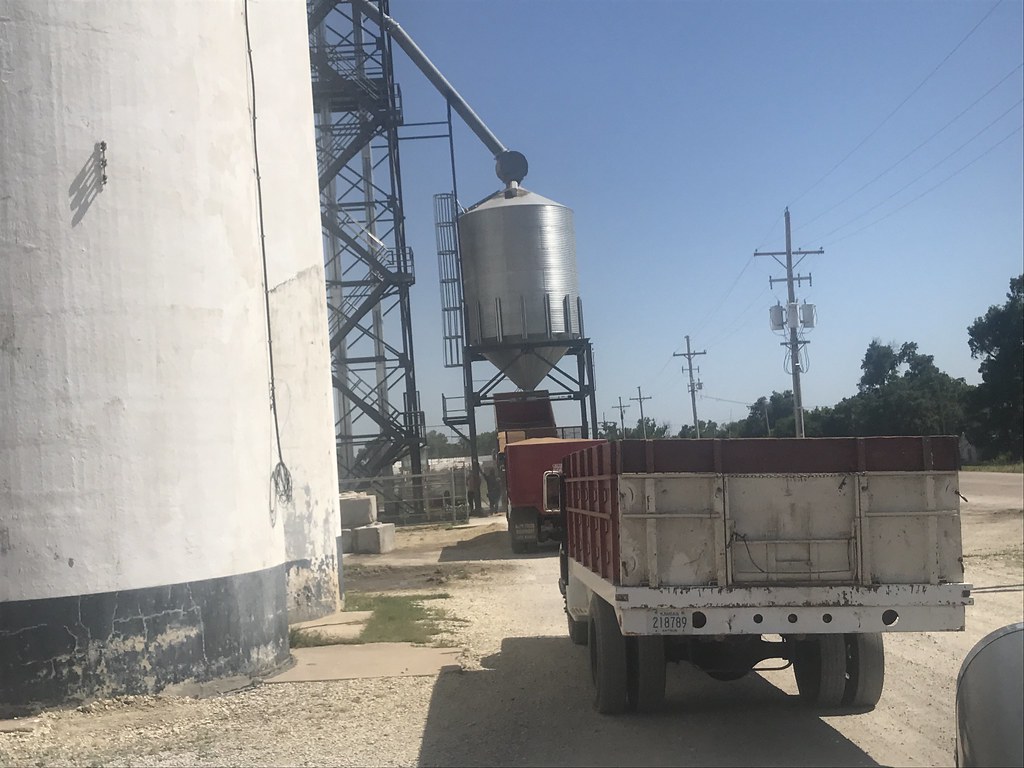 The one and only time I saw any sort of a line at the elevator. 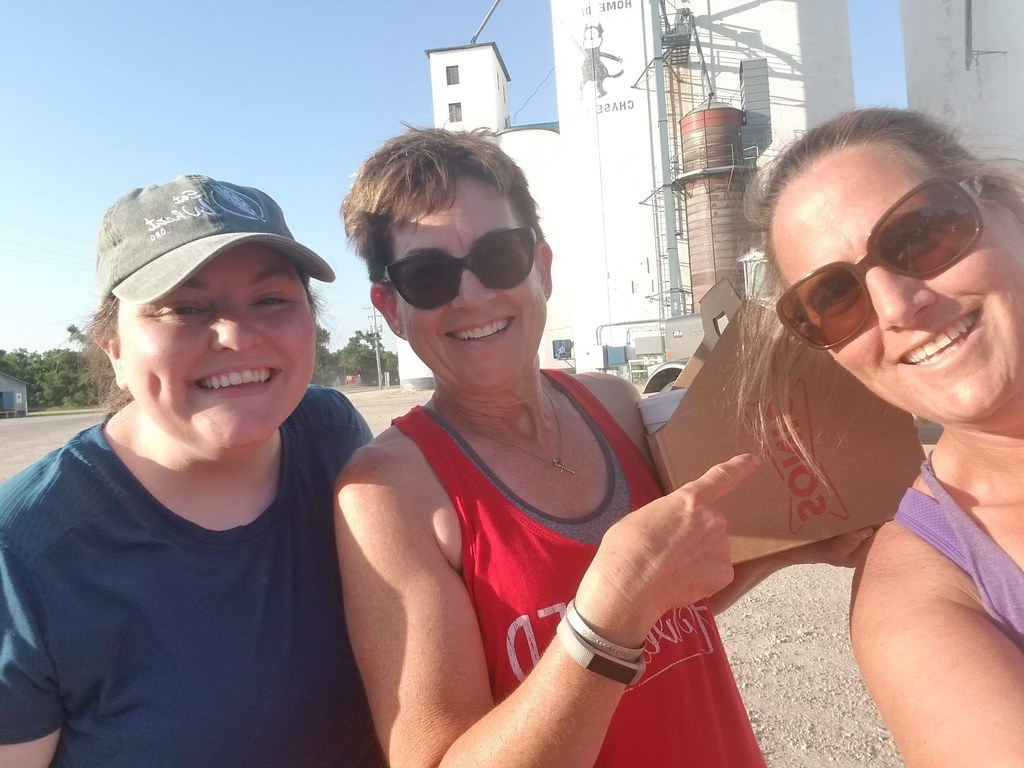 Marsha and Jordan with Kansas Wheat surprised us with supper one night. Thank you, Kansas Wheat! 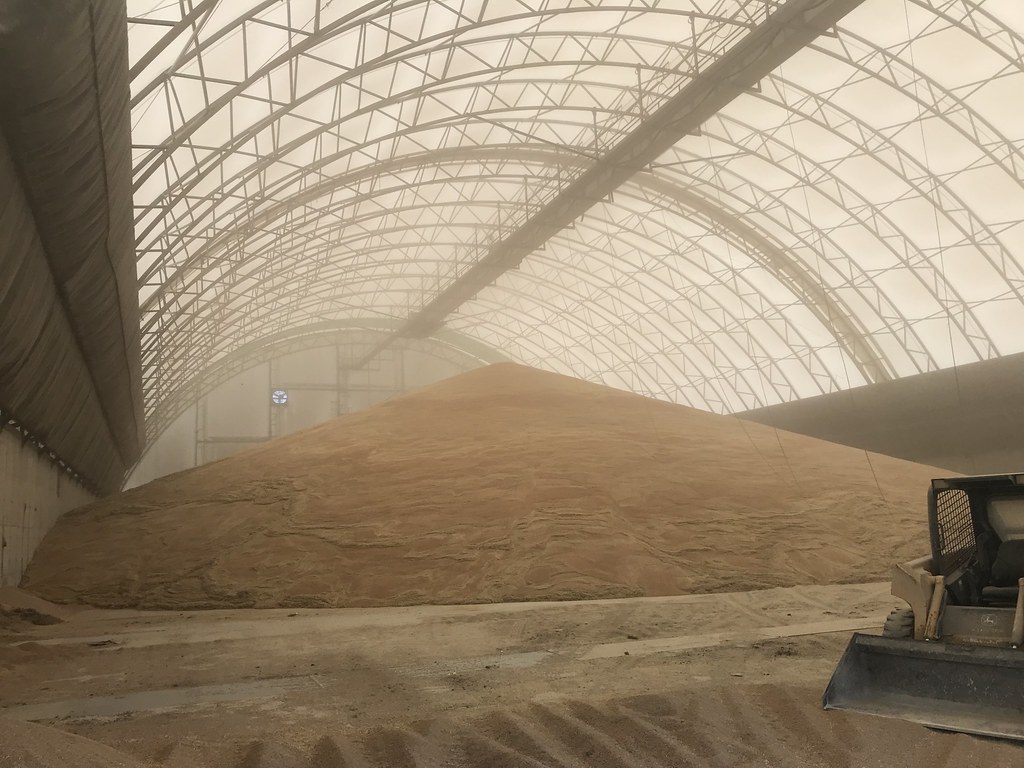 Inside the storage facility in Chase, Kansas. It was fun watching this pile grow every day. 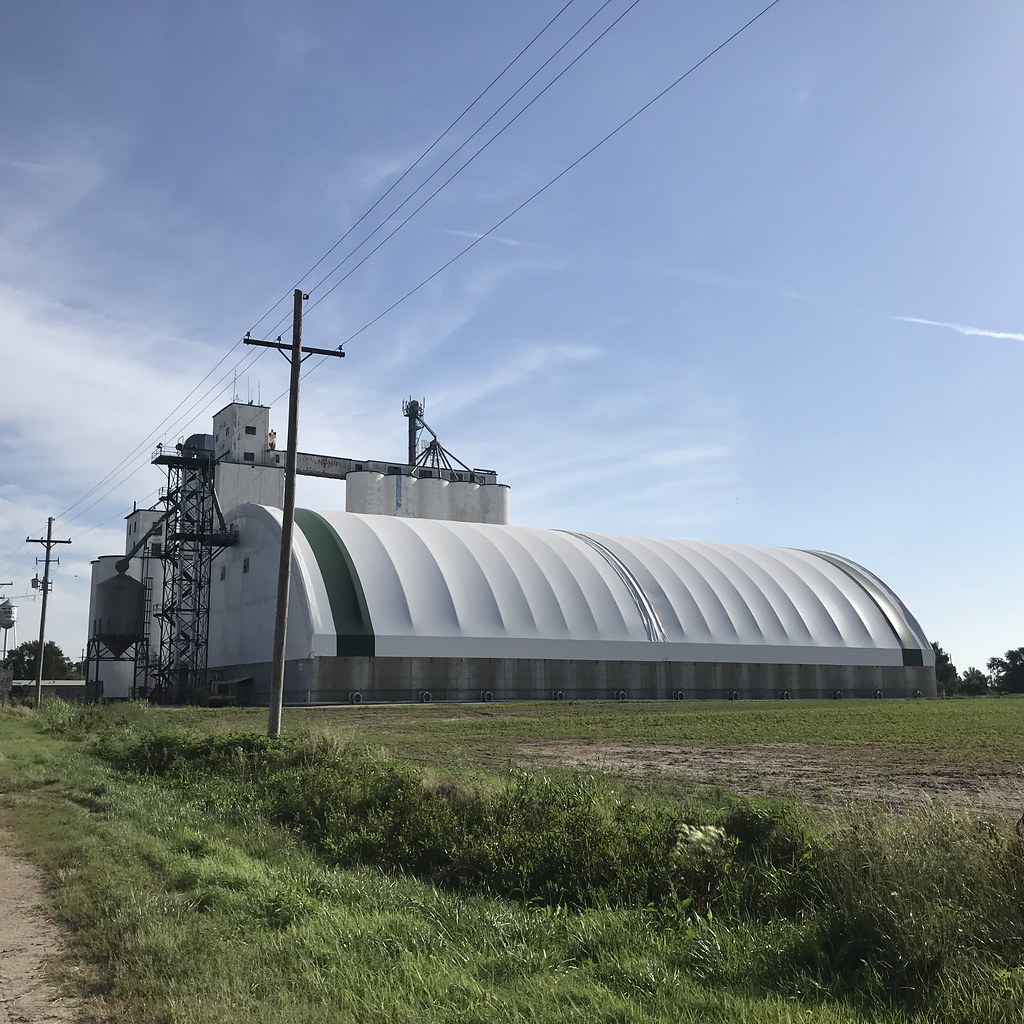 The outside view of the grain storage facility.

There was a lot of exceptional wheat cut in Chase. Yields on some fields were as much as 60 to 80 bushels per acre with a test weight of 63. However, this area had been under water five different times prior to harvest. And even though it was drowned, the wheat looked amazing! It was standing and seemed to offer good, quality wheat regardless of all of the water. Wrong … there was nothing in the heads. Therefore, the overall yield dropped to 41 bushels per acre. 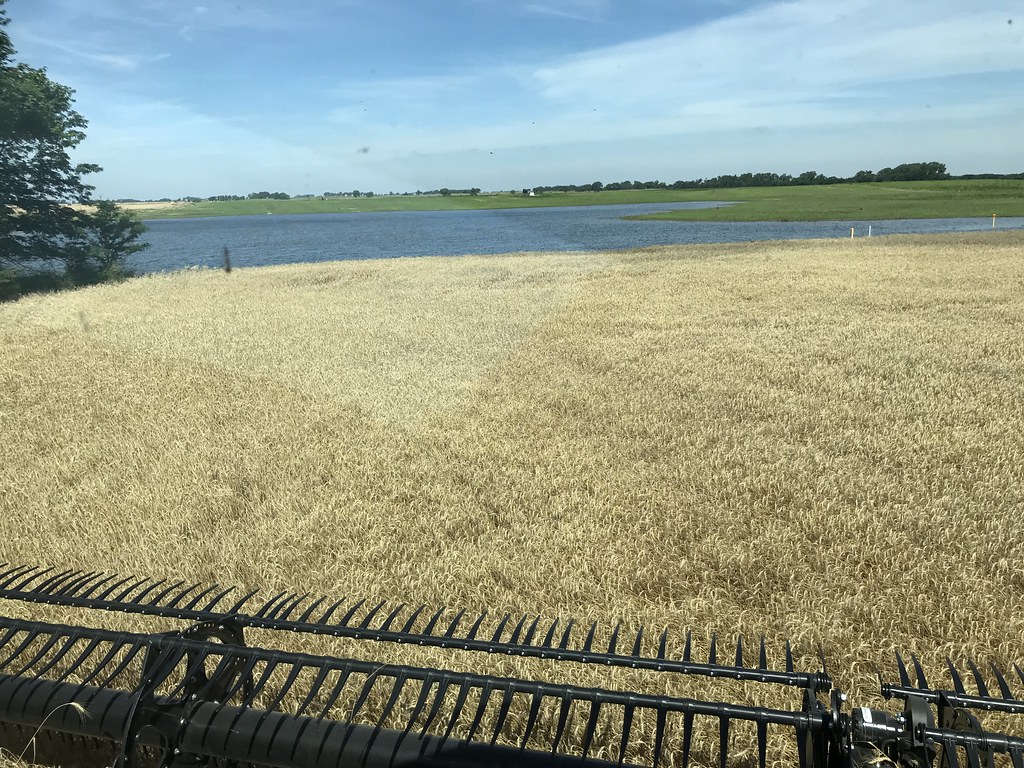 Water was still over roads and ponds were still in wheat fields. 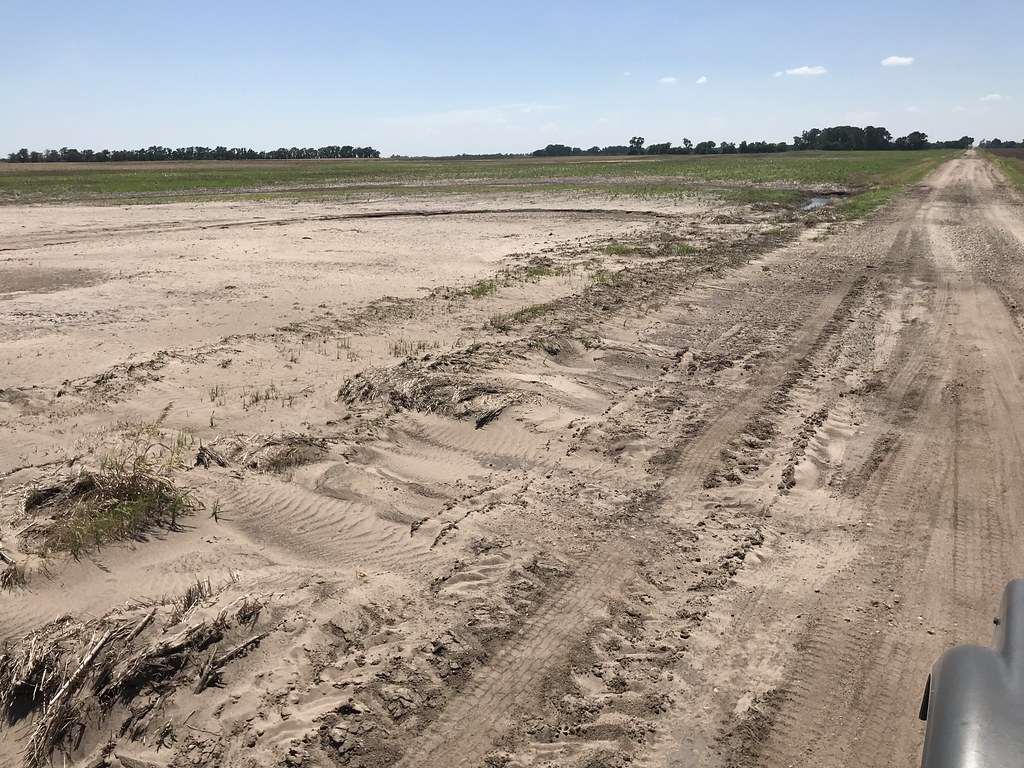 The road conditions in the county were horrible. It was very apparent they had been subjected to a lot of water. 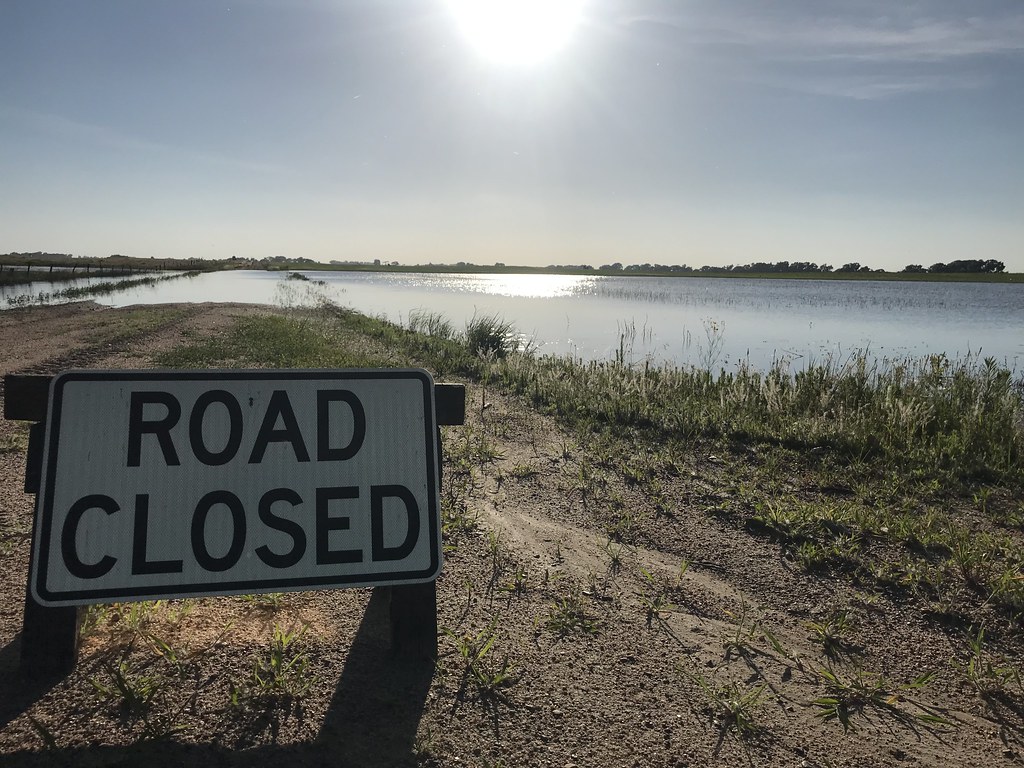 Water still over the roads after multiple times of flooding this spring. 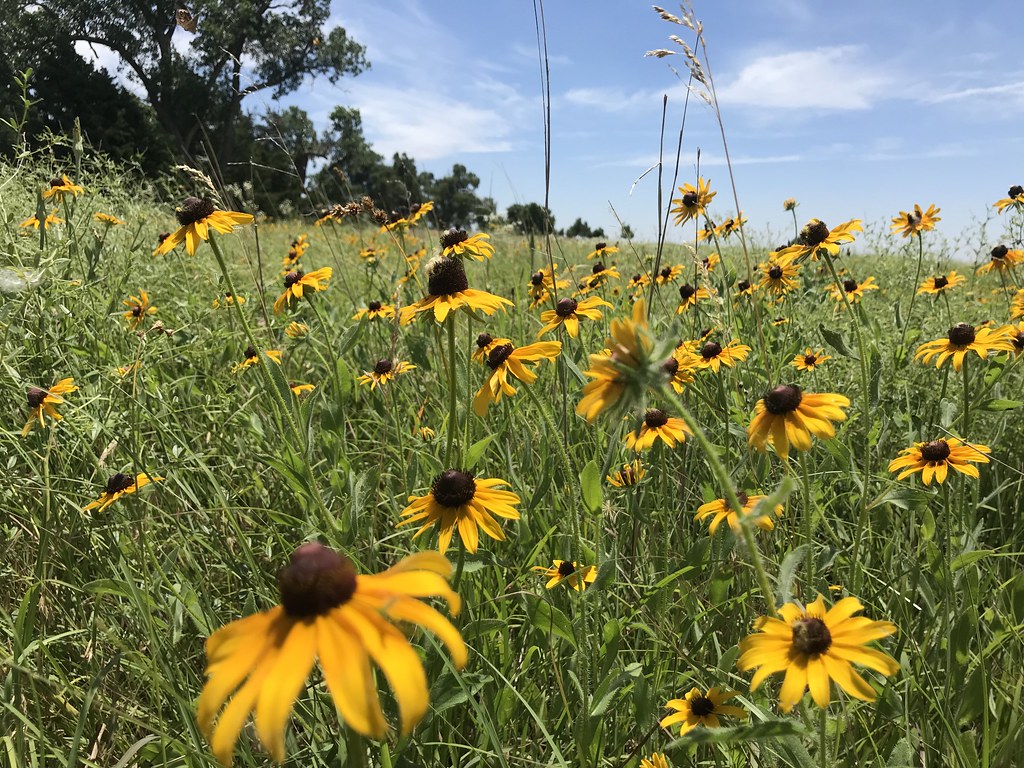 This prairie just yelled at me as I was driving past it. Too beautiful not to stop and share with you.

The first load of equipment made its way to Garden City on July 2. After dropping it off at the farm, we turned right around and headed back to the trailer house in Lyons. Trip number two was made the very next day. Once we arrived, we set up the trailer house, grabbed our water jugs and headed to the farm. 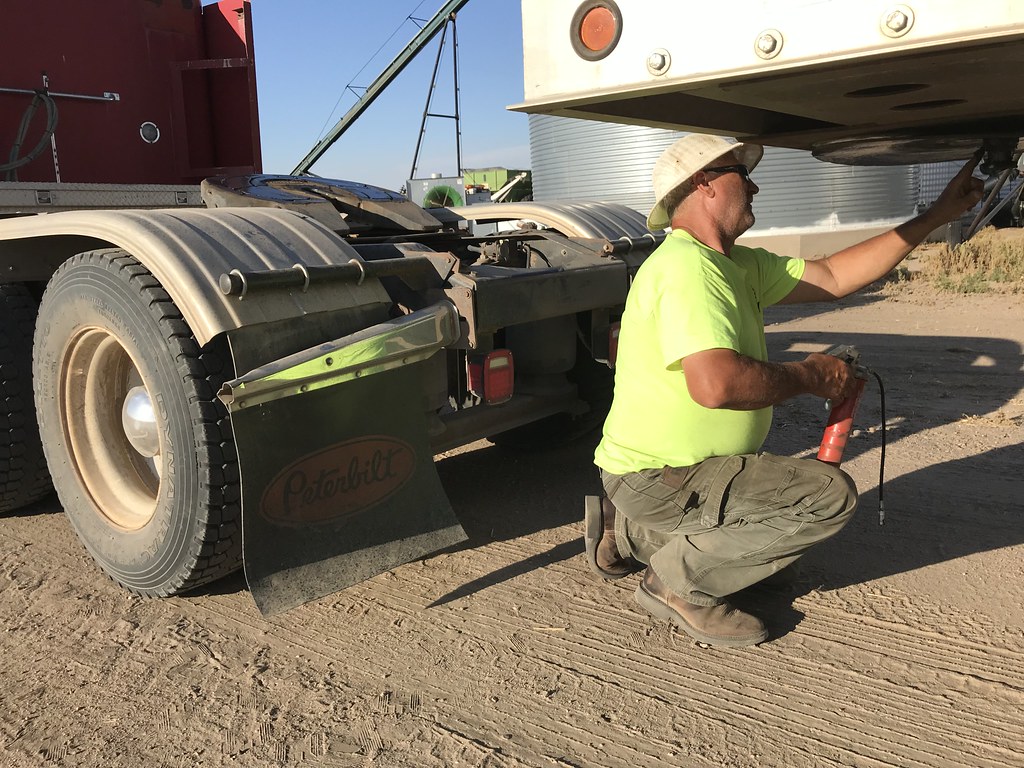 After arriving at the farm in Garden City, Jim is reconnecting the grain trailer to the semi to begin hauling wheat.

By the time we made our first cut, it was early evening. What we found is some of the best dry land wheat we’ve ever seen! If this doesn’t have an overall average of 100 bushels per acre, I will be surprised. Test weights are easily going to be a consistent 63 to 64 pounds. 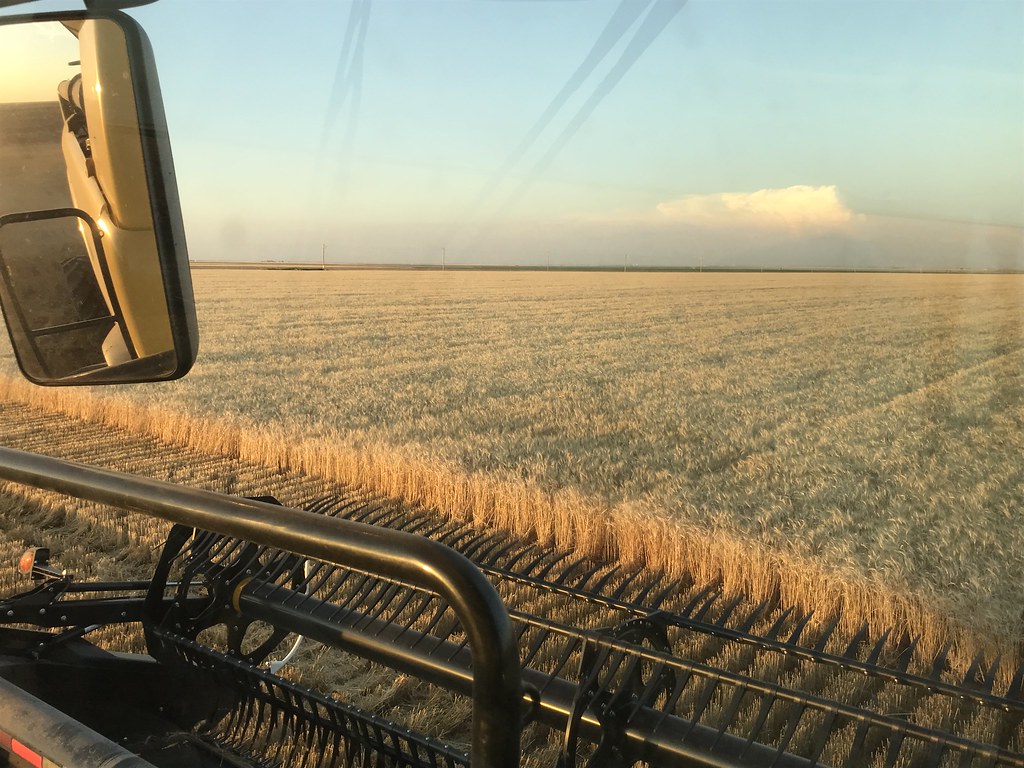 This is what 100 bushel per acre dry land wheat looks like! 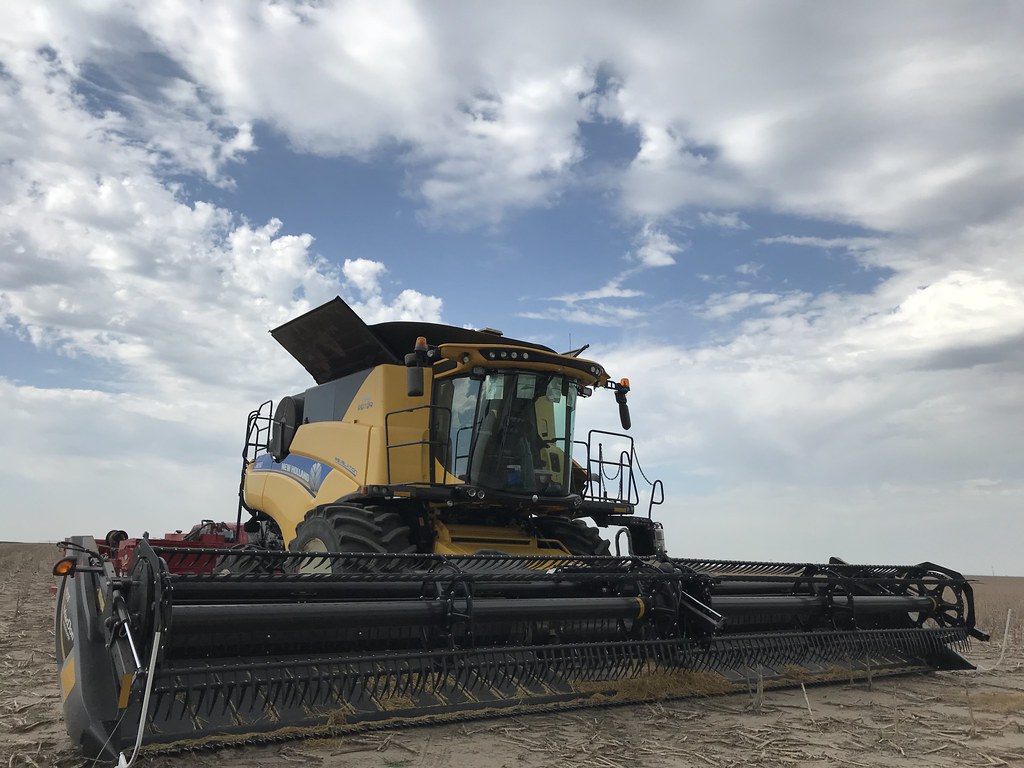 Ready to begin the day! 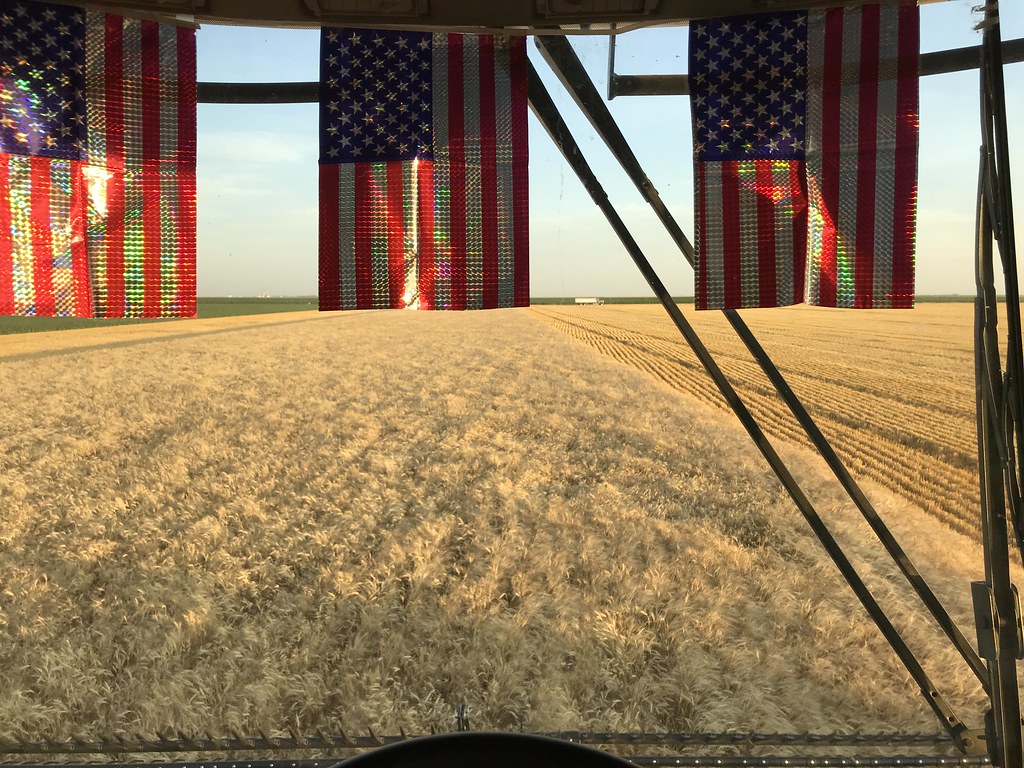 I decorated the inside of the cab for the 4th of July. If I couldn’t participate in any celebrations, I would just have my own! 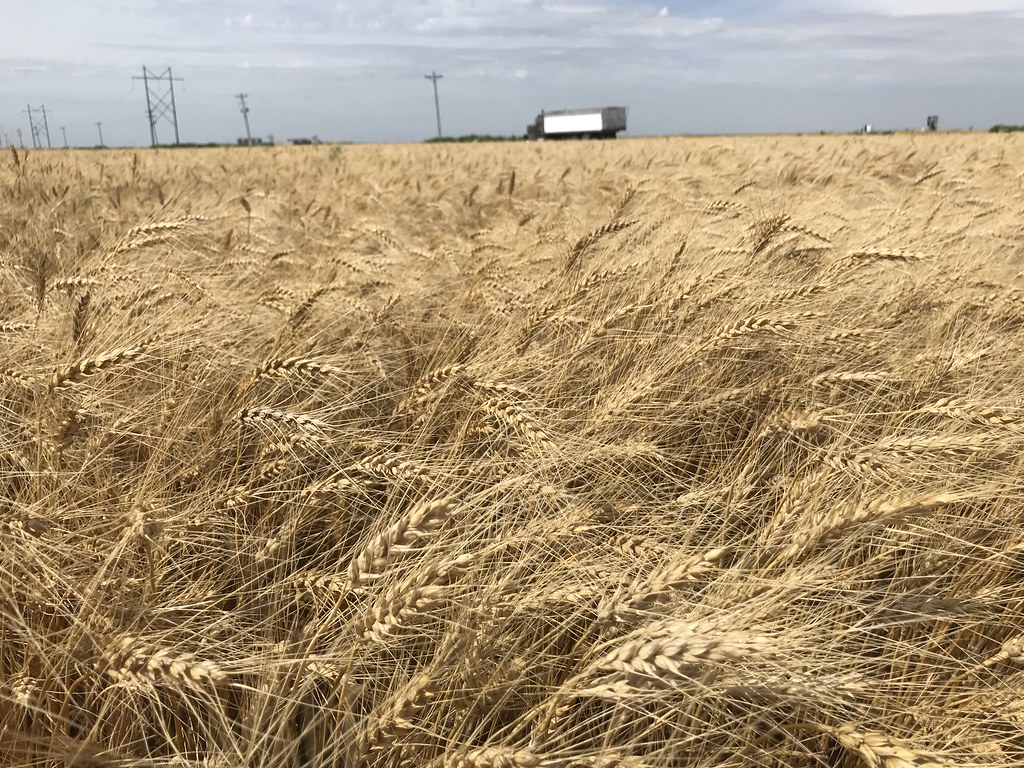 More of what this beautiful southwestern Kansas wheat crop looks like. 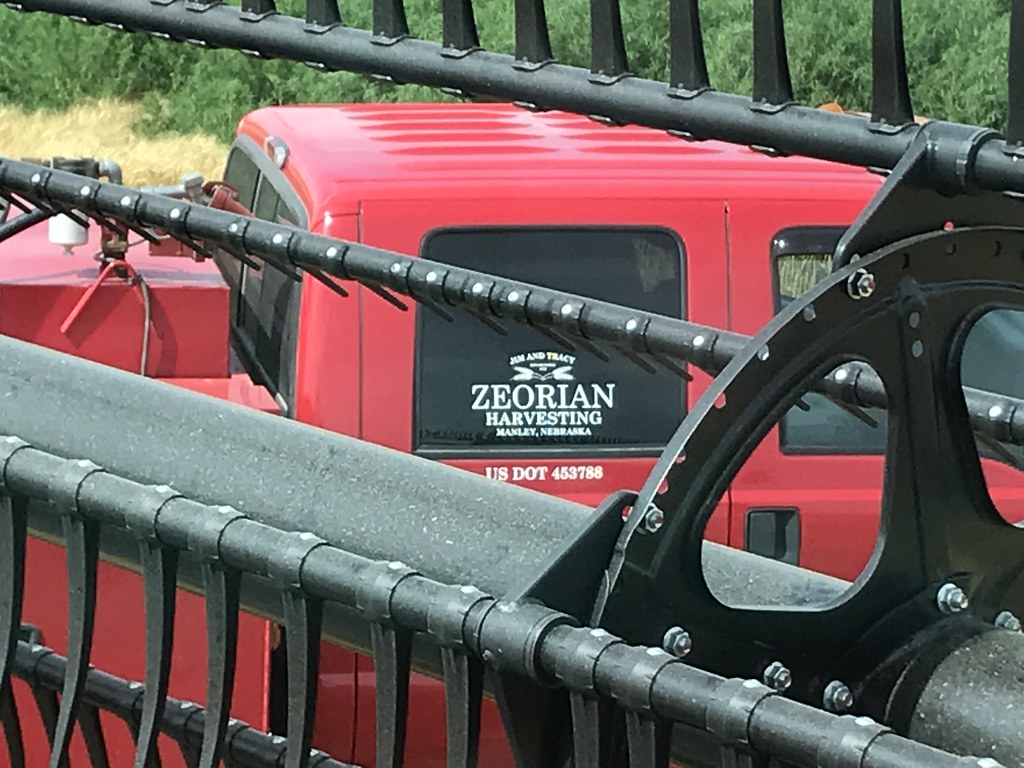 A view from the cab of the combine.

This stop can sometimes offer some of the nastiest biting flies you’ll ever experience. This is one of those years. Unless you saturate all parts of  your exposed body to bug spray, the flies can and will be relentless. I honestly believe they could drive someone batty! They are so bad, the swarms that hover around you almost look like a black cloud.

We had a pretty heavy sprinkle last night with more in the forecast. The craziest thing that happened to me yesterday was watching what the weather man called a “land spout.” Not only was there one, a second one formed and joined the first at the ground. It was pretty sweet watching them from a distance! 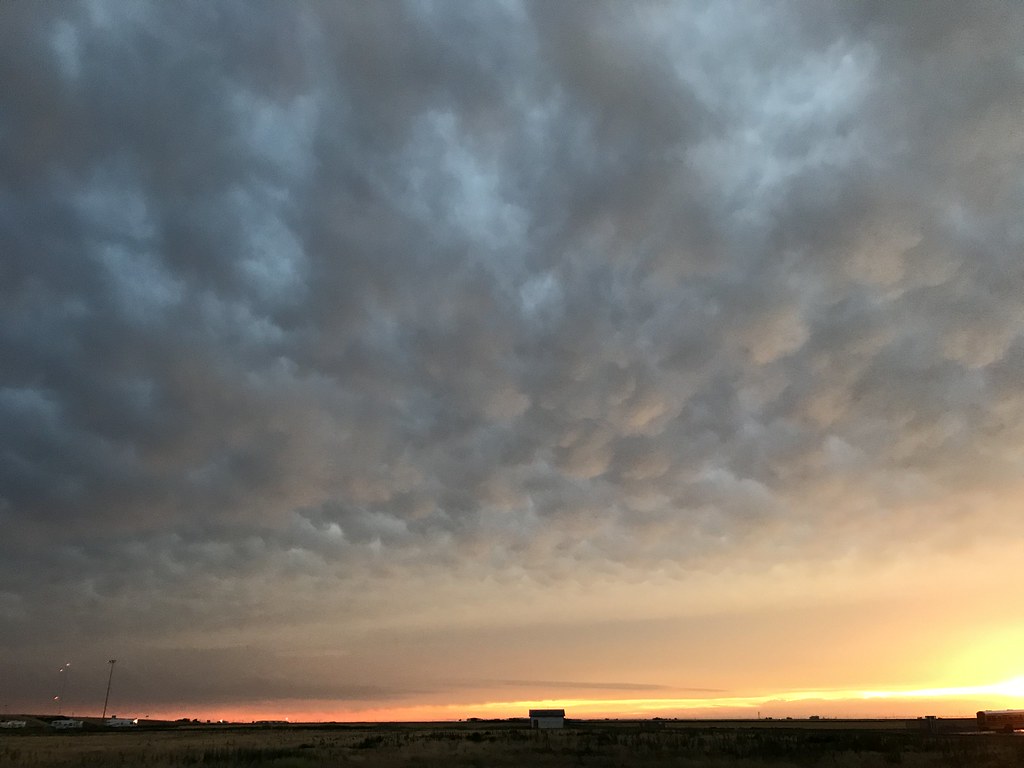 We should be back in the field later this afternoon—if the rain doesn’t beat us first.  I’m thankful for this little break. I was getting pretty tired. The late nights and early mornings were starting to wear me down.

Last year when the summer was over, I wished that I had kept track of how many sandwiches I made. I decided I would keep track of that this year for fun. So far … thirty-one.

Until next time …”When wheat is ripening properly, when the wind is blowing across the field, you can hear the beards of the wheat rubbing together. They sound like the pine needles in a forest. It is a sweet, whispering music that once you hear, you never forget.”–Norman Borlaug