All Aboard Harvest | Tracy: A bushel and a peck
18083
post-template-default,single,single-post,postid-18083,single-format-standard,qode-quick-links-1.0,ajax_fade,page_not_loaded,,qode-theme-ver-11.2,qode-theme-bridge,wpb-js-composer js-comp-ver-5.4.7,vc_responsive

Tracy: A bushel and a peck

Tribune, Kansas – Boy howdy! Can you believe those bushels cut in Western Kansas? 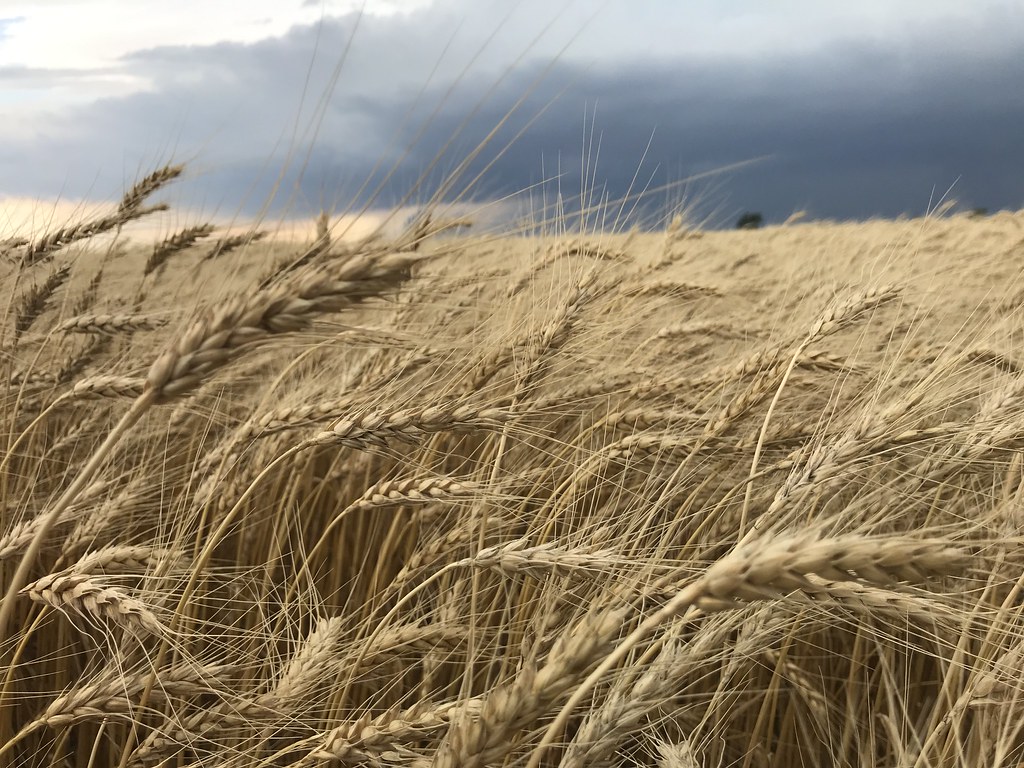 This was definitely a once-in-a-lifetime crop cut by many farmers and harvesters in this neck of the woods! Anyone you talk to would agree no one really had a clue what the heck was about to happen when the combines began making their way through the golden fields of grain.

When we made our very first cut through the first acre in Garden City, we knew we were about to see something we had never seen before–100 plus bushel per acre dry land wheat.

We have cut high-yielding irrigated wheat there before. But to see the dry land produce the number of bushels hauled this year was absolutely phenomenal! We had two fields average over 100 bushels per acre. The others weren’t quite that high but it wasn’t anything to shake a stick at! The average for the acres The Beast cut was 88 bushels per acre (irrigated and dry land). The test weights were pretty consistently registering 63 to 64 pounds. The elevator we hauled to didn’t test for protein levels.

This particular stop for us is one where you can almost always count on the irrigated wheat to be laying on the ground, or lodged. This year, however, it was flip-flopped. The irrigated was standing (and yielding less) and the dry land was lodged with a tremendous yield. 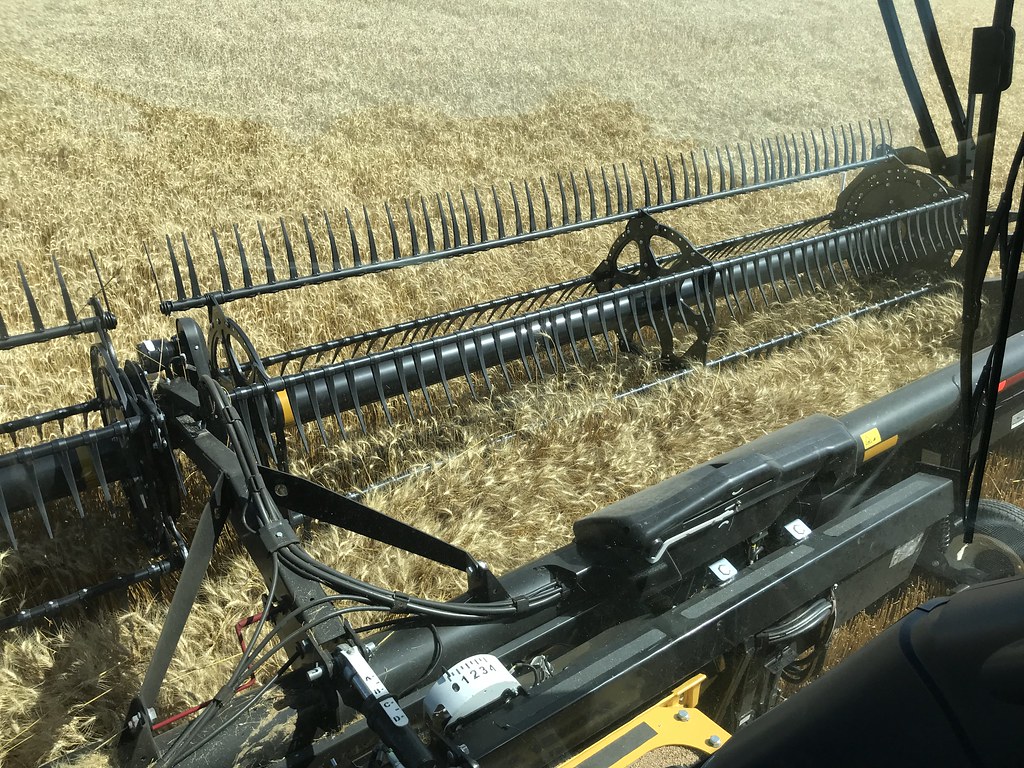 In Garden City, Kansas, this is what 100 bushel wheat looks like! 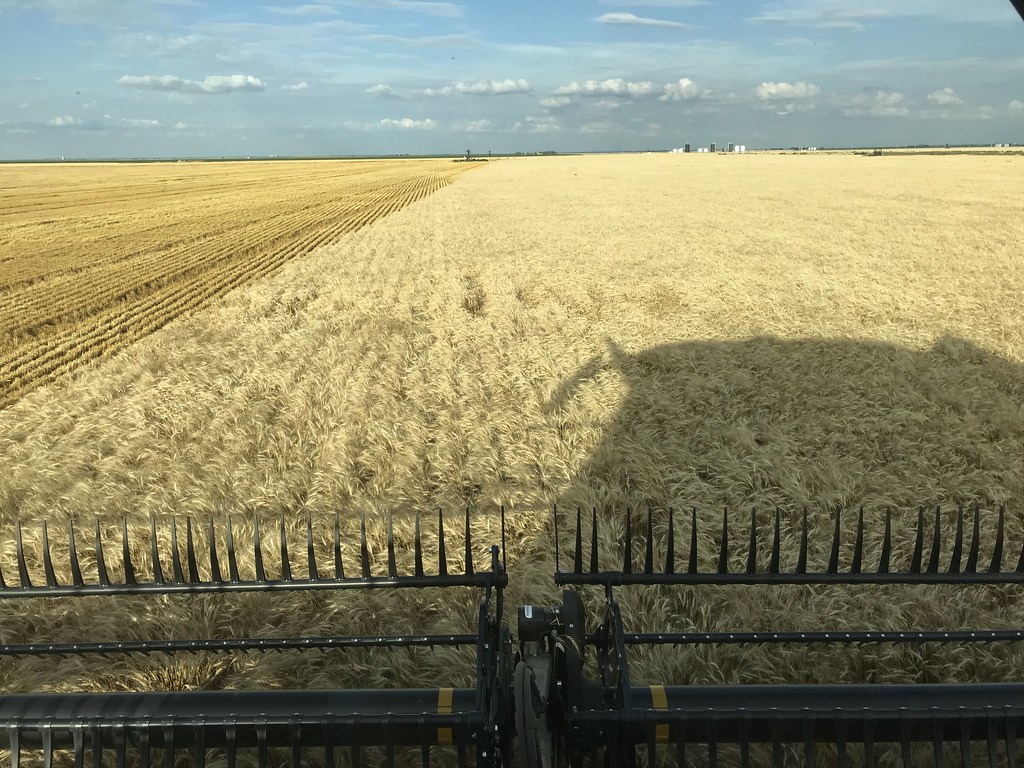 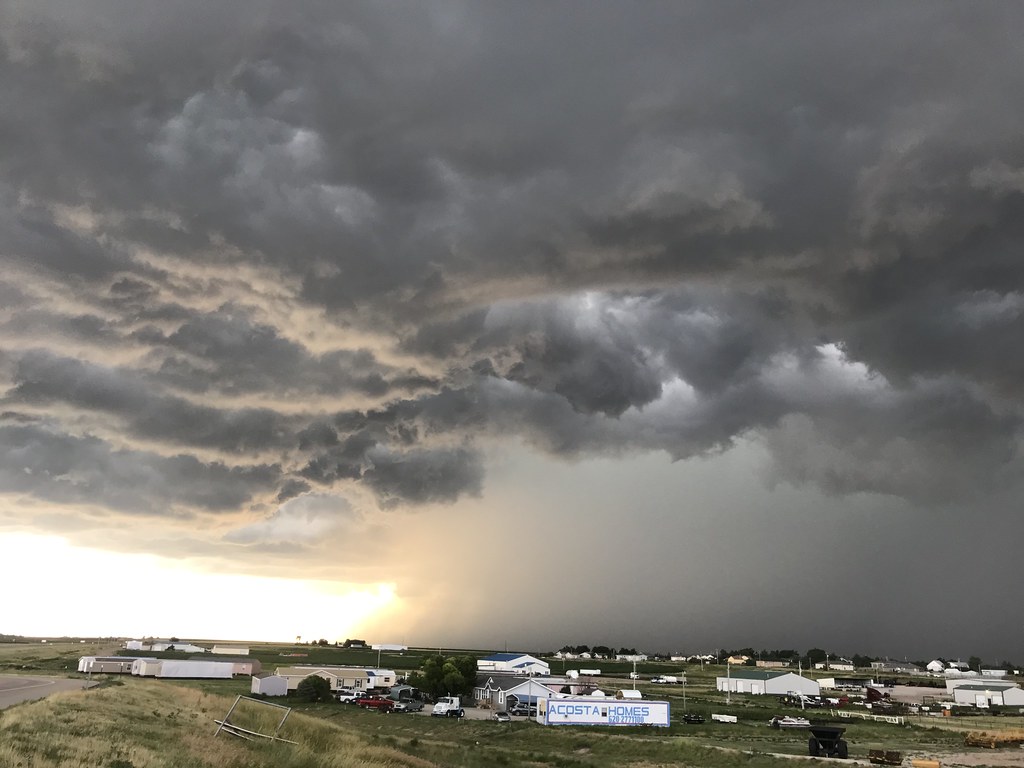 This storm marched right over the top of the acres we had left to cut in Garden City and dumped 2.5 inches of rain and hail. We were out of the field for three days before we could get rolling once again. 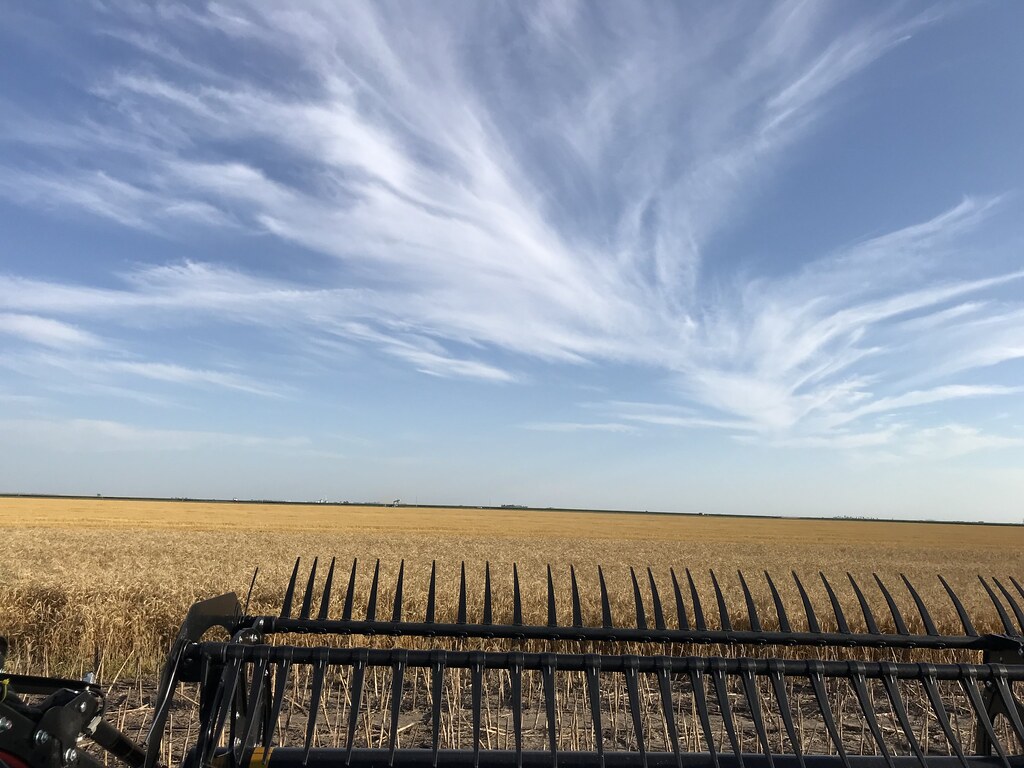 I love the beauty of the vast skies and wide-open horizons of Western Kansas! 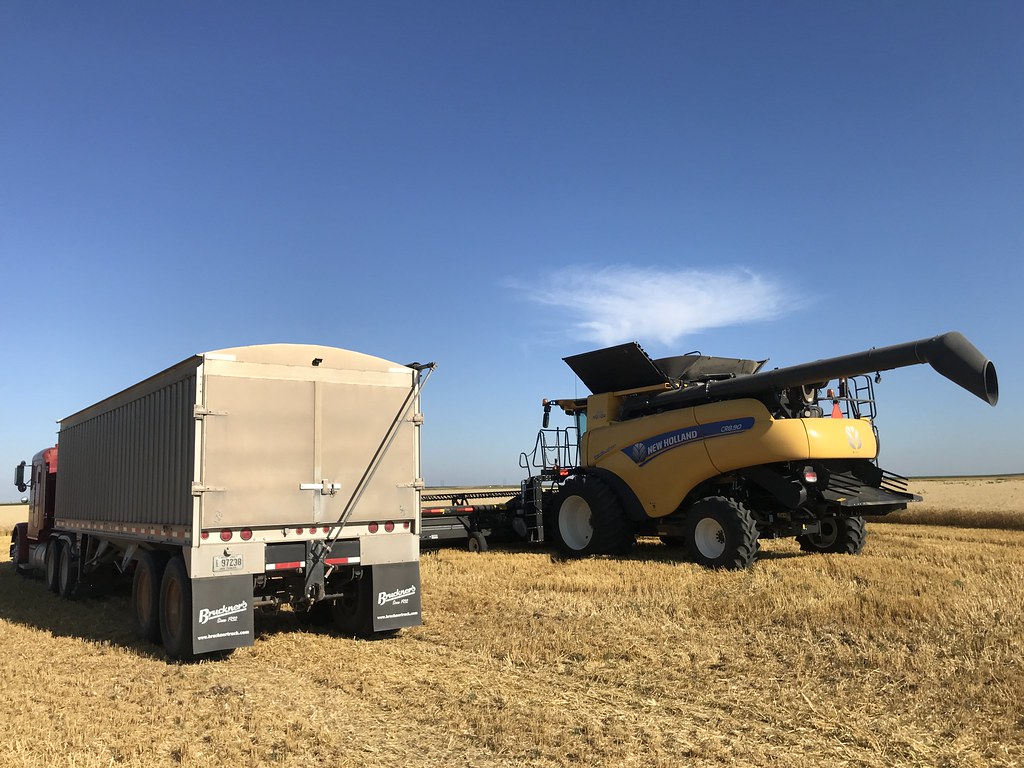 There they sit—patiently waiting for us to get all the pieces together again needed to cut the final pivot.

Last fall was a wet one for the farmers in this area. They struggled to get the crops like corn and milo harvested off the pivots and the wheat planted. The dry land wheat was planted in September through the first part of October. The irrigated wheat didn’t get planted until after the fall crops were harvested in November. And we all know what the weather can look like in November–cold and damp.

Fall was getting away from our farmer and winter was moving in fast. It was decided there wasn’t enough time to work the ground as they should prior to planting wheat. As I mentioned in the previous paragraph, it was rainy and the cold temps were looming on the horizon. Therefore, the local co-op fertilizer spreader truck was hired to spread the wheat seed on top of the pivot acres. When that process was complete, the farmer then ran the disc over the ground and worked the grain into the already cold, damp dirt and previous crop residue. When I cut the corners of the pivot, I was told I would be able to visibly see the boundary between the dry land corners and the pivot – there were no drill marks in the pivot. In my eyes, it’s a miracle there was even a crop!

We finished cutting our last acres in Garden City on July 16 and immediately started the cleanup that afternoon. Oh my gosh it was hot! The final few days we were in Garden City, Mother Nature cranked the heat to over 100 degrees. If you haven’t cleaned a combine and header in the heat of a summer day, you’re really missing out—ha! 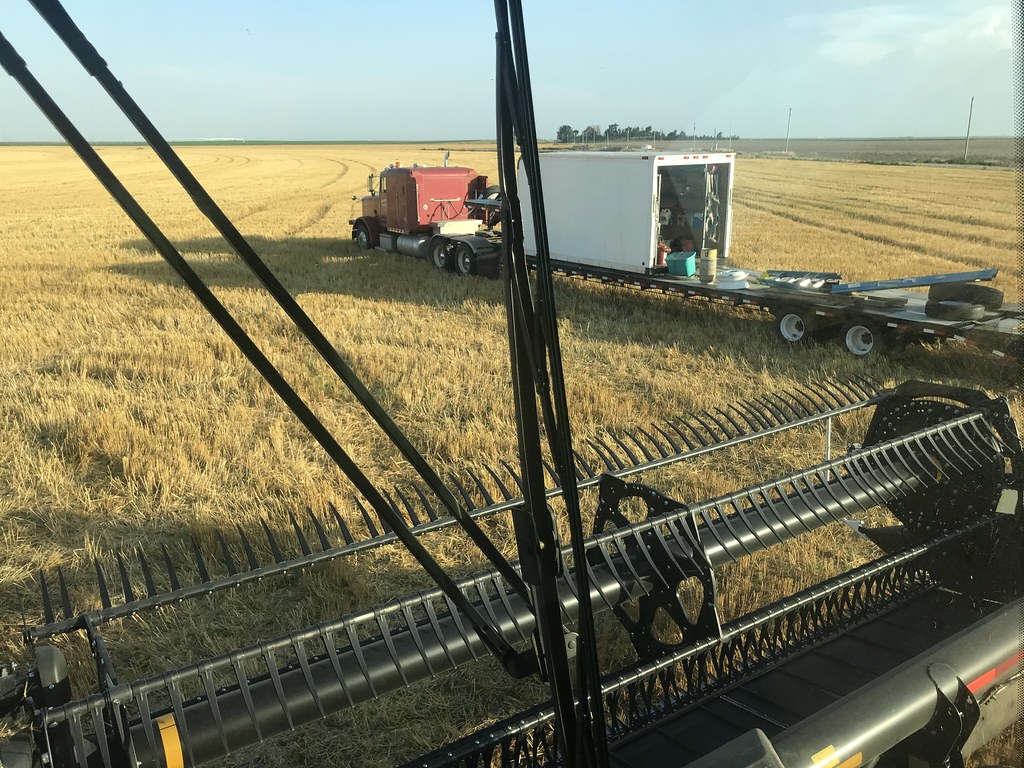 We brought the shop trailer to the field so we could use both air compressors to get the header and combine blown off. 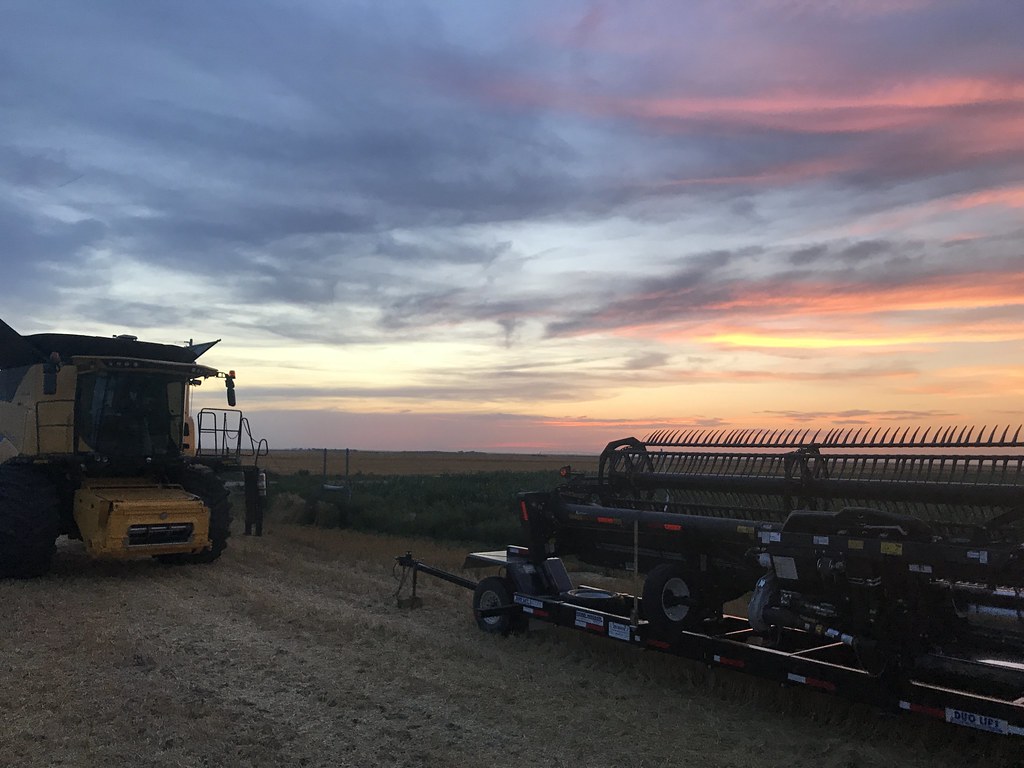 “The heavens declare the glory of God; the skies proclaim the work of is hands.”—Psalm 19:1

Our first load to Tribune was made on the following day. Once we arrived, we parked the shop trailer and Frank (with the header trailer) and made our way back to Garden City to load The Beast. We wanted to be on the road the following morning before it got too hot. 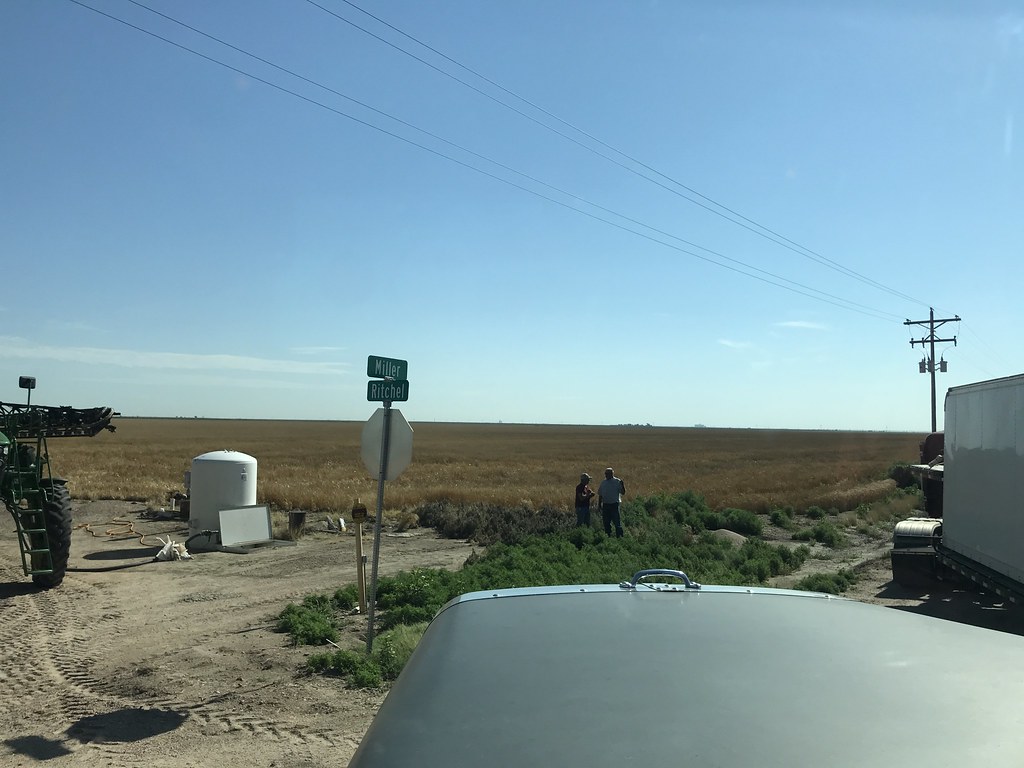 And because you can—stop at an intersection in rural Kansas, block the corner and have a conversation. Leaving with the first load of equipment and headed for Tribune. 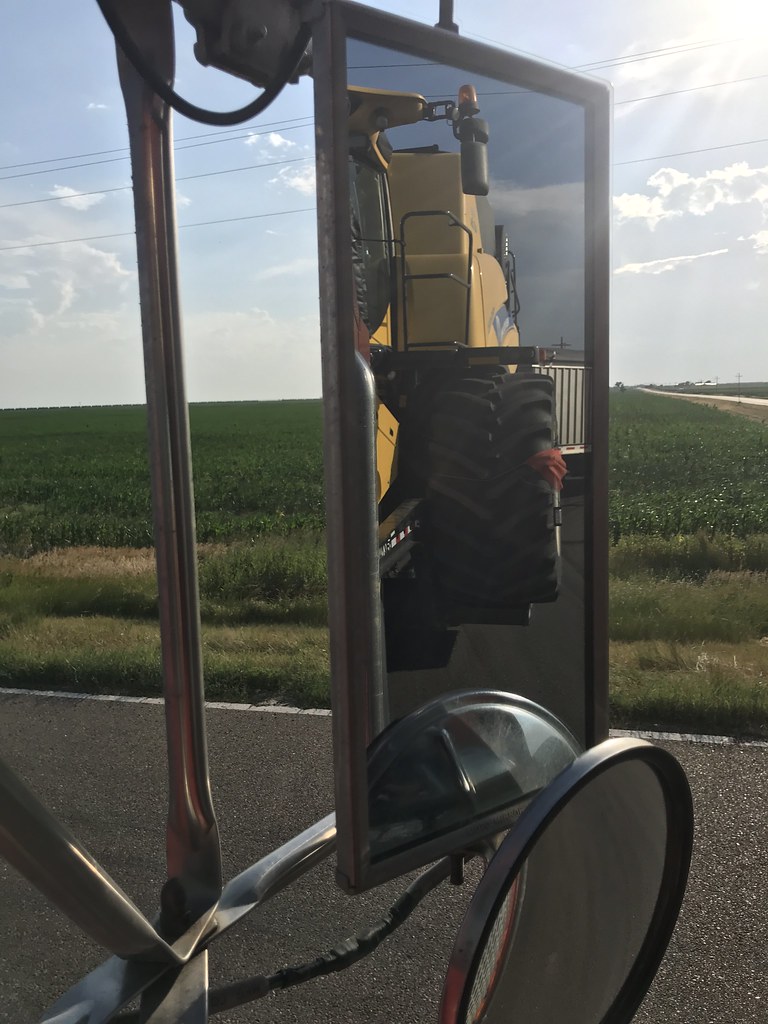 After we made it back from Tribune, we loaded The Beast and took it to the truck stop near where the trailer house was parked. I very rarely get to sit in this seat when the combine is loaded. I’m usually driving one of the other vehicles.

We arrived in Tribune on July 18 about 11 a.m. and immediately started undoing everything we had done in Garden. The trailer house was set back up and we were headed to the field. We were able to get 75 acres cut before we called it a day.

Harvest, for the most part, is over in the Tribune area. We were able to pick up several more days of work before making the big move to Montana. In the past, we would have made our way to Colorado after finishing at Garden City. Due to hail, we had to find acres to make up for what we lost. Thank goodness for harvest friends! We may be viewed as “competition” but we’re also a network of people who look out for each other. More times than none, it’s the people you meet along the journey who help you get through the tough spots in life. 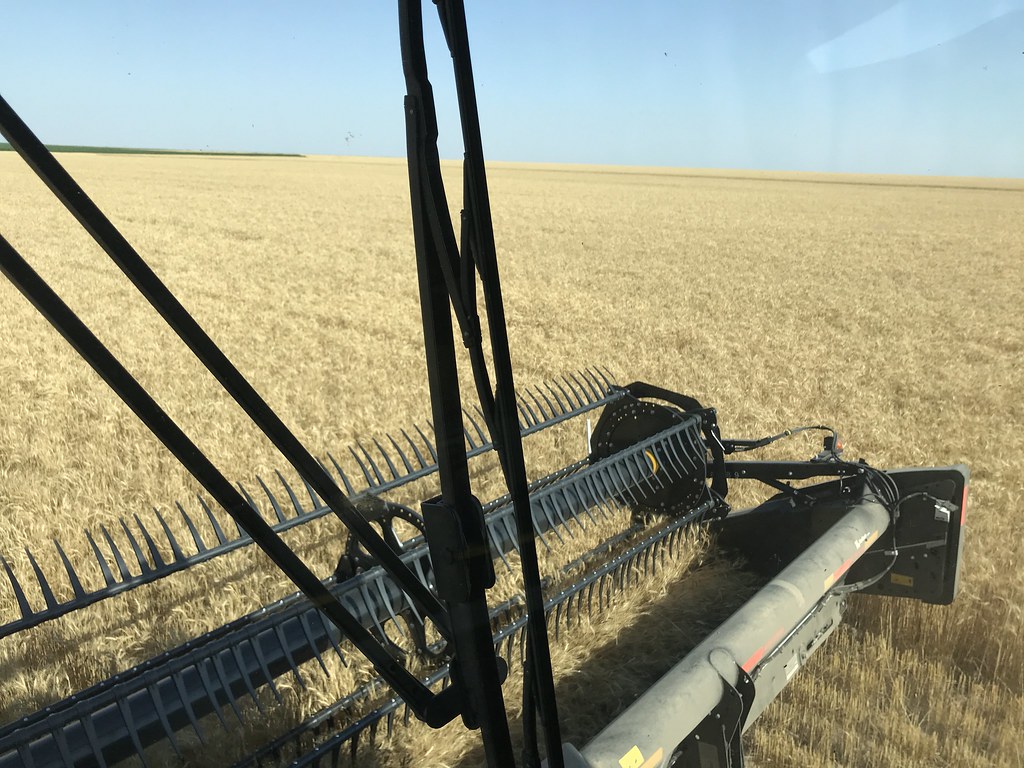 Cutting Hard White Wheat near Tribune, Kansas. It looks like the yield could be very close to 70 bushels per acre. 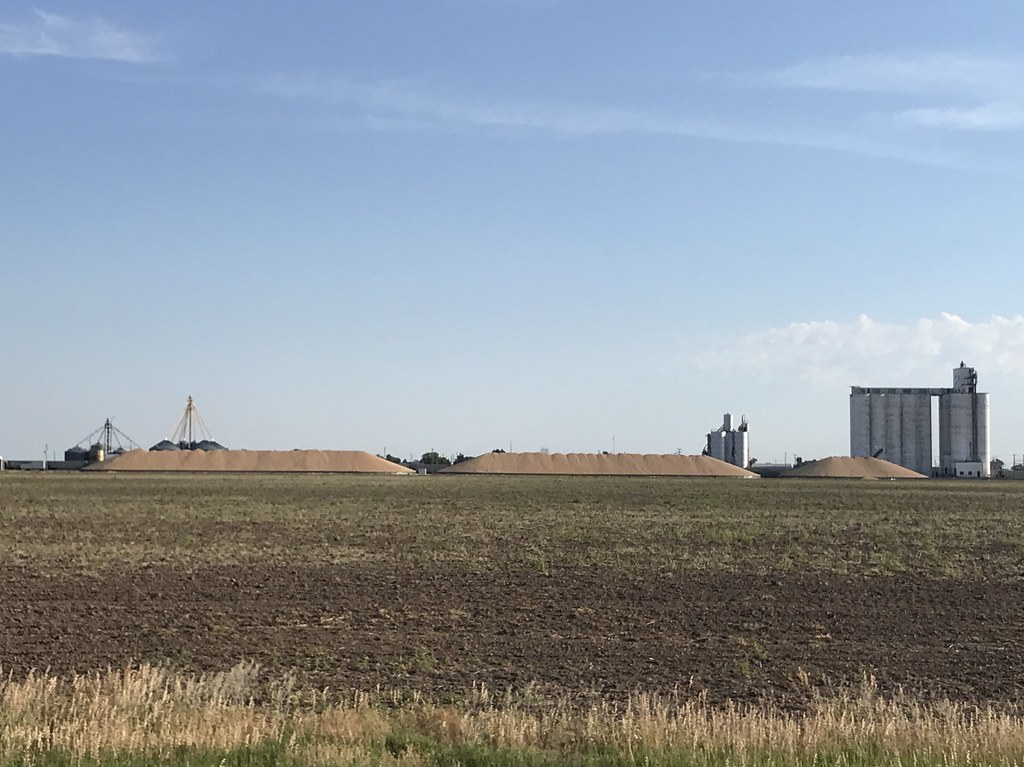 I just wonder how long this particular elevator has seen this many bushels of wheat? This is in Horace, Kansas. 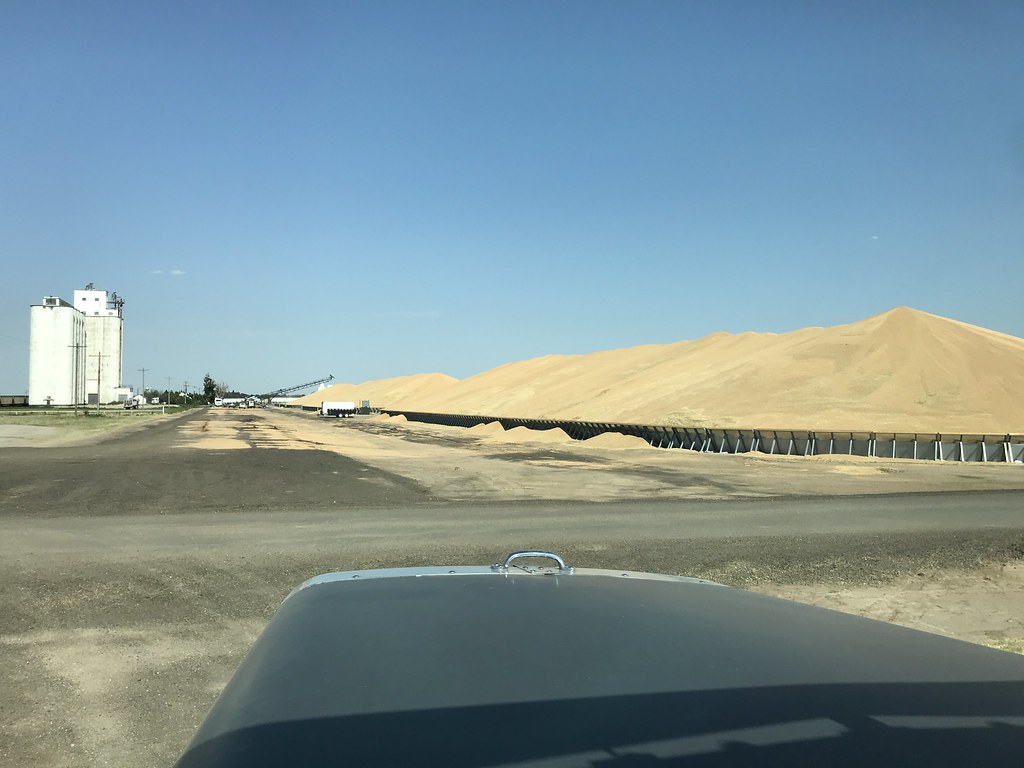 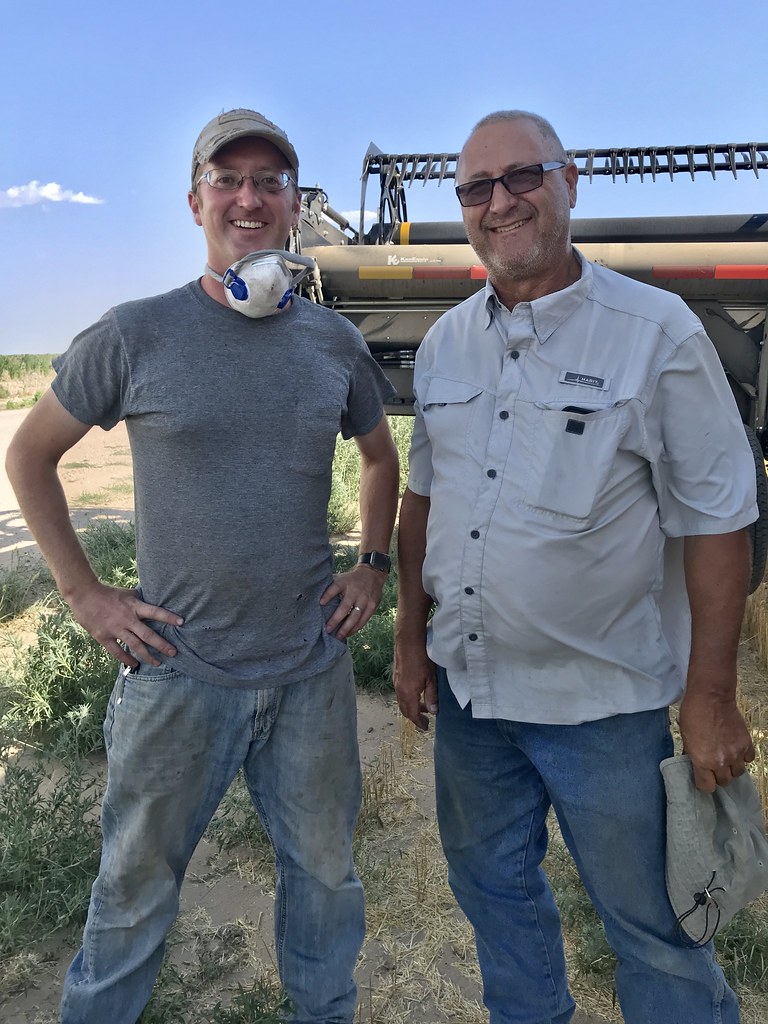 It’s always fun when we get to meet someone who has followed our journey since 2009 in the High Plains Journal and on Twitter. Now we can put a face to the name. Thanks for coming and hanging out with us, Sean! 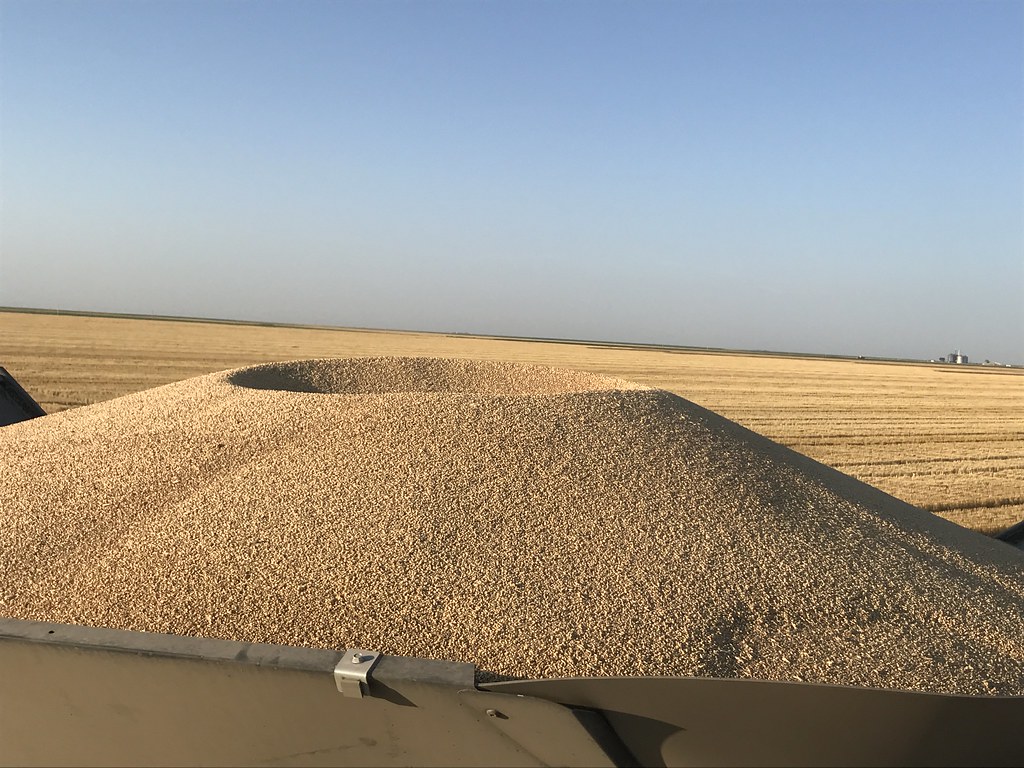 In honor of the 50th Anniversary of the Apollo 11 Moon Landing. Get it? The crater of white wheat! Waiting on a truck … again! 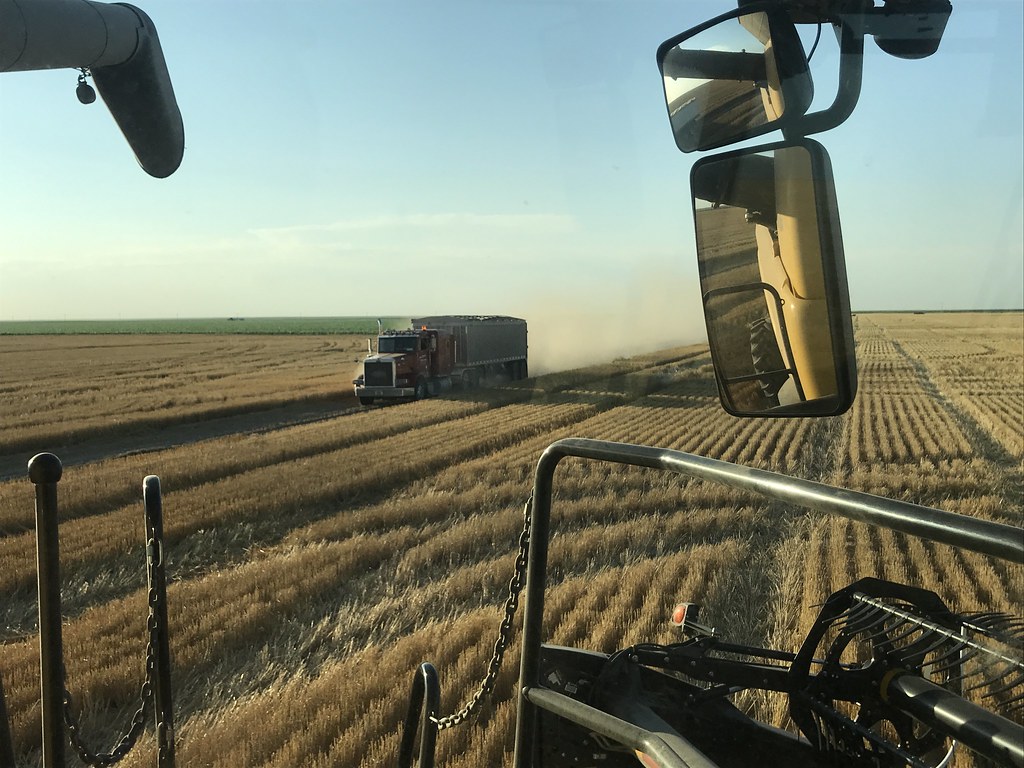 I’ve had to spend more time waiting on a truck than usual in Tribune. Jim has been getting trucks shuffled as fast as he can since we started cutting here. 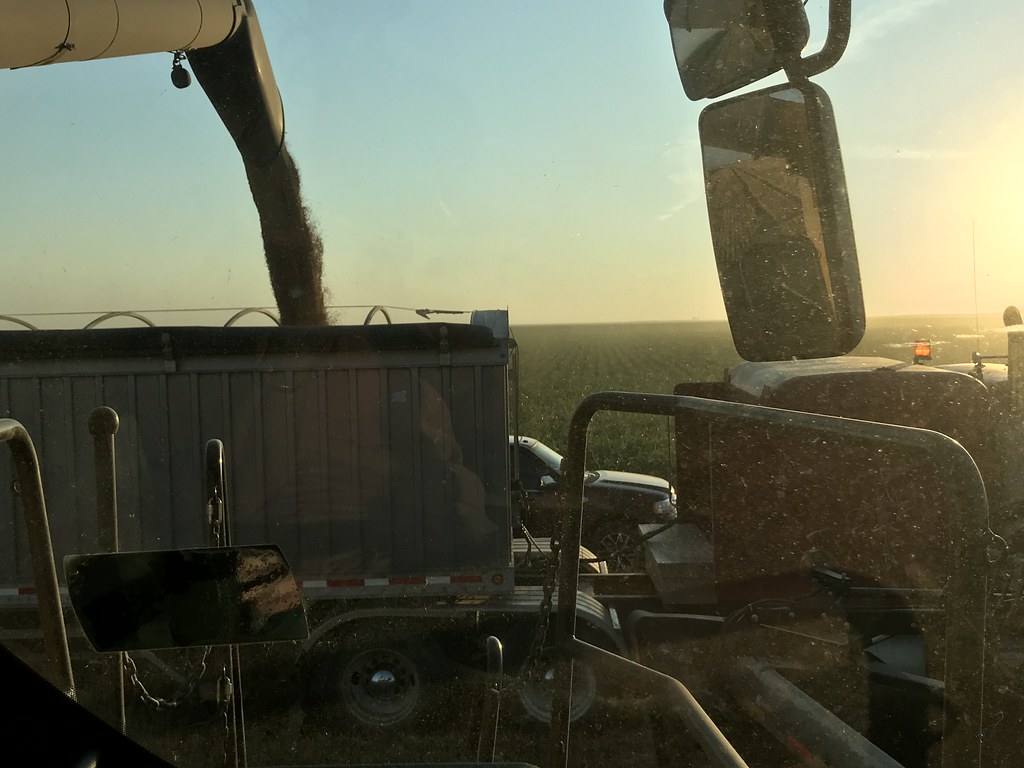 This is a very rare sight for the Z Crew! See the vehicle between the truck and the box? That’s supper being delivered. Thank you to Tyson’s wife, Madison, for feeding these wheaties—it’s very much appreciated!

We had a very large storm explode over the top of us on July 20. The elevator was closing at 8 p.m.  I was also watching the clouds to the west moving closer and closer. I was hoping to finish filling Frank one more time so Jim could get it in to the elevator before it closed. But I also knew I was going to be playing the “cloud game” and wondering if I was going to win. 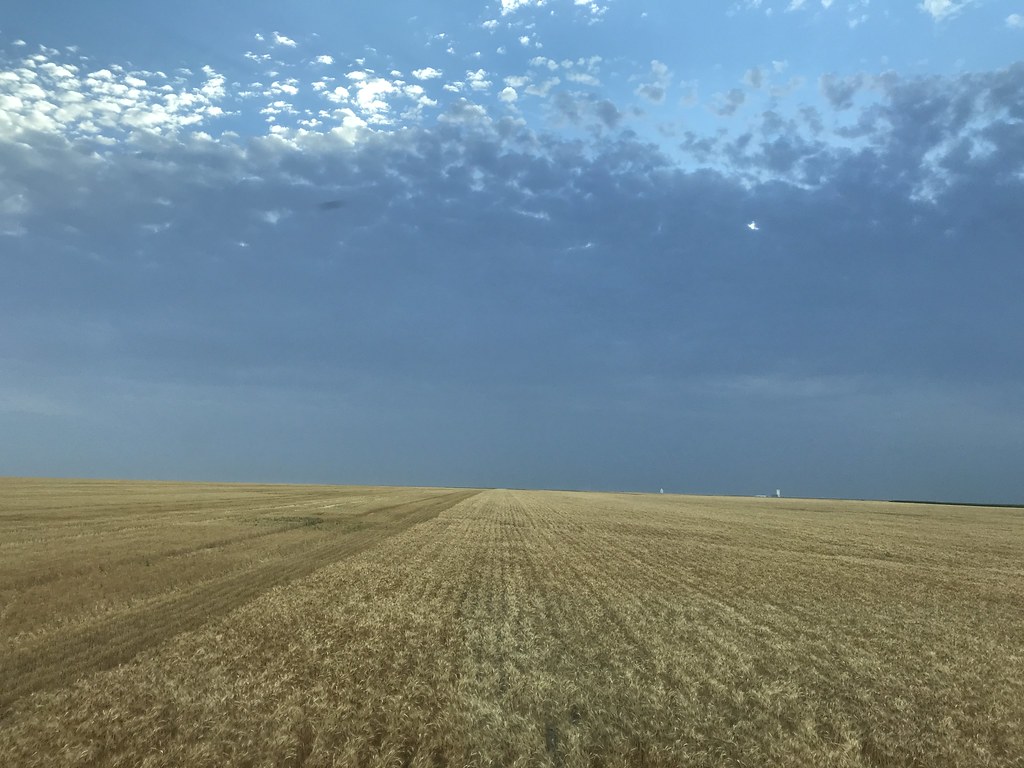 These are the clouds I was watching as I was making my way westward. They weren’t the ones that got us—it was the ones behind me that just exploded out of nowhere.

I was cutting my way west through the field when the first few rain drops began hitting the header. I was confused because the clouds I was watching were coming from the west. These sprinkles were coming from behind the combine. When I reached the end of the swath and turned around, I saw a very ugly storm sitting right over the top of Frank–a half mile away.

I tried to get back to the truck before the storm completely enveloped the combine but was unsuccessful. By the time I reached Frank, it was pouring rain and hailing. I realized I wasn’t going to get all of the grain on the truck so when it was full, I quickly jumped out of the combine to roll the tarp. The adrenaline was flowing and I didn’t even think about the high winds that were also a part of this picture. Thank goodness the winds were in my favor and the tarp rolled with ease…or maybe the adrenaline helped.

There wasn’t that much grain left in the combine’s grain tank and I thought I could just shut the bin cover. I must have been doing something wrong because they were not folding as they should and I was stressed. I called Jim and told him he would have to come back to the field so I could finish unloading. By this time, there was so much water in the field and running on the road, I was sure we would have to wait quite a while before heading back to town. I waited in the combine until the rain subsided and then made my way to the pickup. It was decided that neither truck was moving and would spend the night right where they were parked on the road. 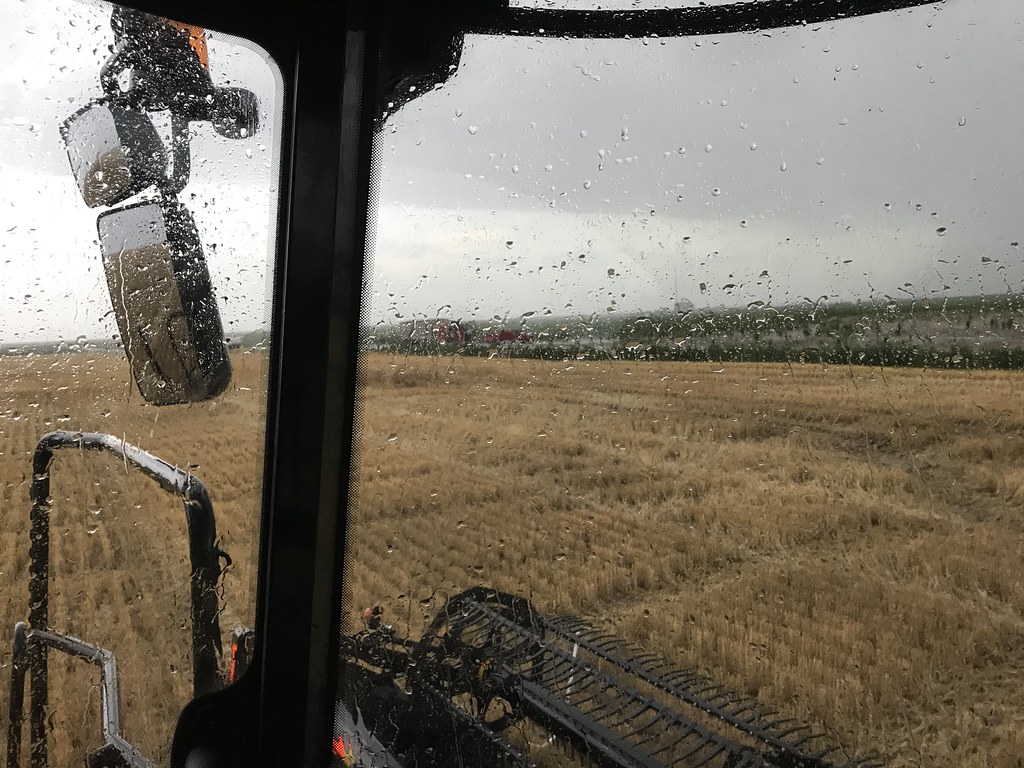 Riding out the storm out in the cab of the combine. 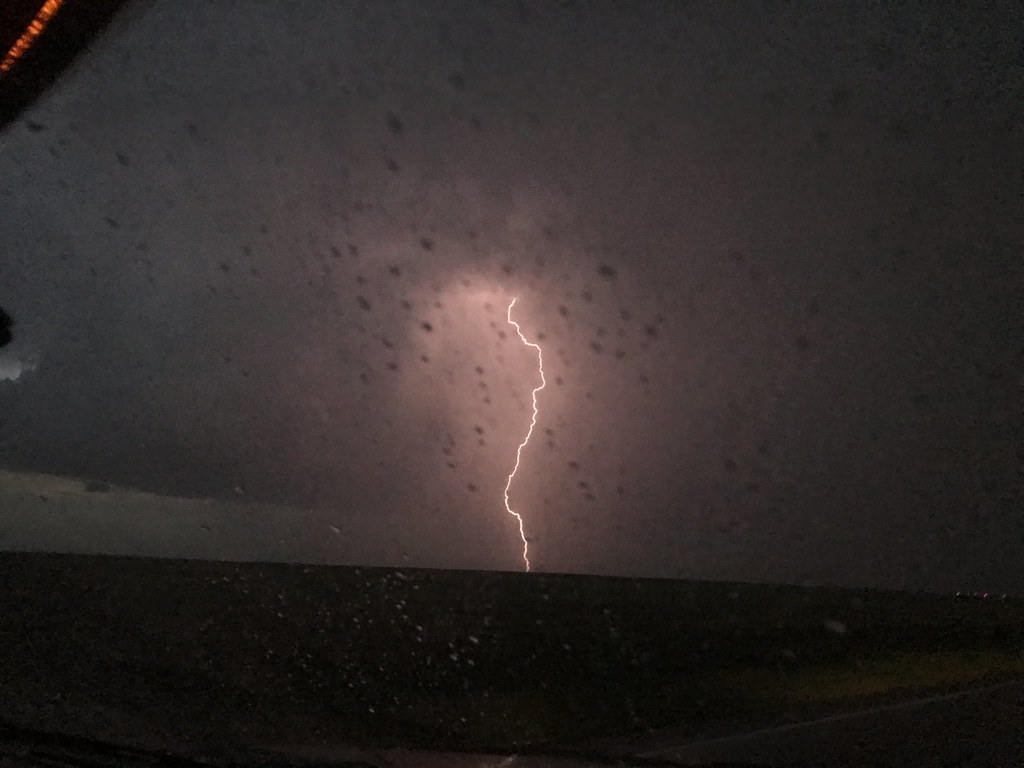 The lightning was intense the whole way back to Tribune. The storm became virtually stationary right over the top of the town with a lot of cloud to ground lightning strikes. A fire was started south of town due to the lightning.

All I can say is … where the heck did that come from? I definitely lost this round of the game!

Until next time … “A true friend never gets in your way unless you happen to be going down.”—Arnold H. Gasgow 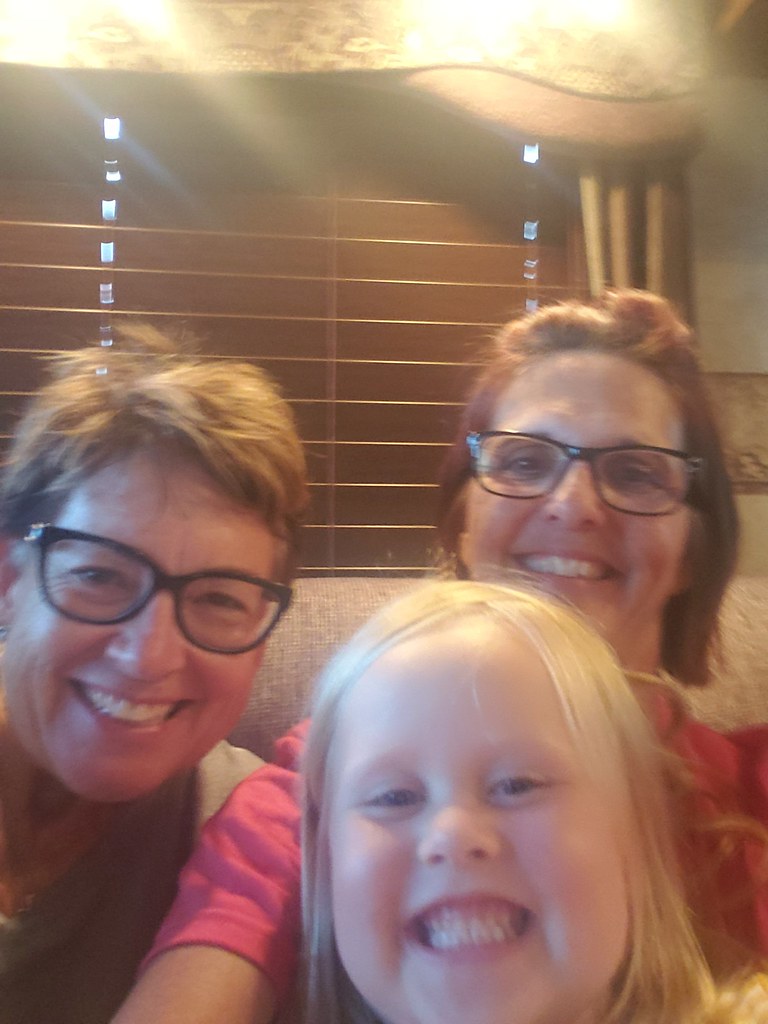 Some Sunday Funday Selfies with friends! 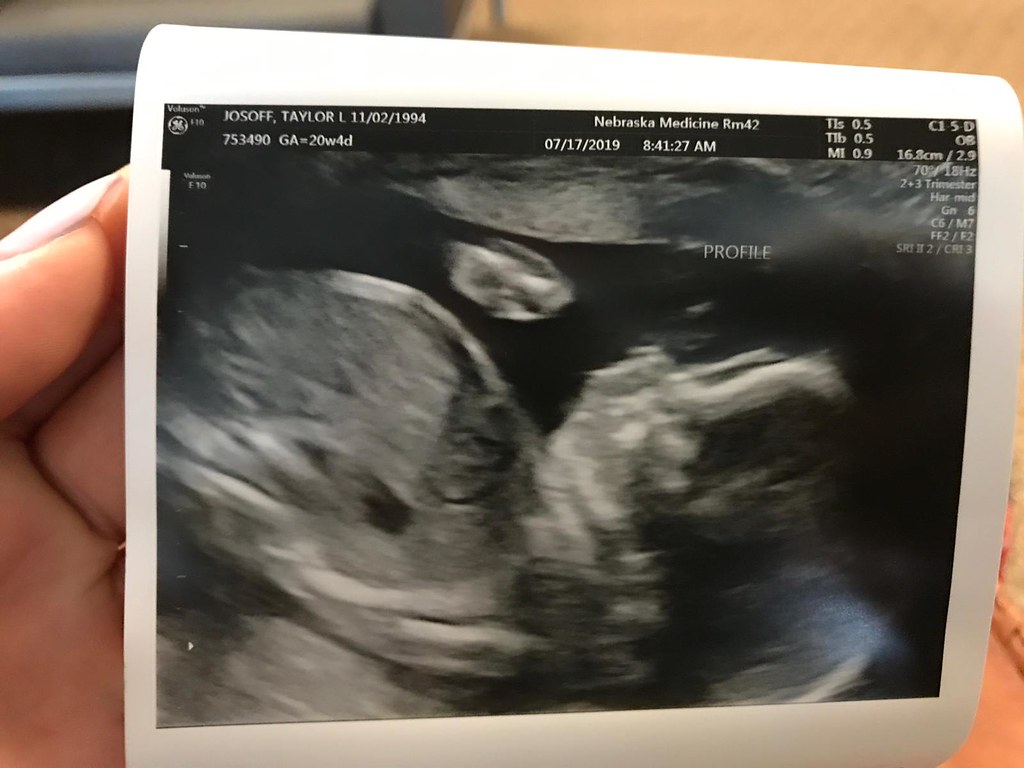 Grandbaby #4—can’t wait to meet this little dude or dudette in November!