Western Nebraska—The forecast was supposed to be clear but out west there can be pop-up thunderstorms and that’s when there’s a threat of wind and hail and sometimes lots of rainfall. On Friday night, July 26, we were cutting wheat and then a storm in the west was building.  Thankfully, all we got was a sprinkle but there were some wicked looking clouds to the west.  We heard Lodgepole got hit with the worst of the storm.  I was told it hailed for 30 minutes and ruined the crops in that area.

On Saturday night, July 27, we were cutting and we had a big chance of rain.  As harvesters, we keep cutting until it rains.  While we were cutting and the storm was approaching our field, we had lots of lightning and high winds for quite awhile and then the rain drops began and that’s when I quit cutting and went to the trucks to empty the hopper.  Miss Moo was riding with me in the combine.  This isn’t our first occasion of being caught in a storm and having to get out of the combine quickly.  I always carry Moo if it’s raining and run to the pickup but this storm wasn’t too bad.  I can remember a couple of times where we were caught in some pretty bad storms.  One in particular, I was carrying Moo and running to the pickup in the rain and wind and it felt like buckets of water were being thrown at us.  This pop-up thunderstorm was nothing compared to that.

Overall, the wheat we’ve cut here has been very good but it has been very tough going. It has been yielding in the 70s and the test weights over 60 pounds per bushel.  The straw is green yet and a heavy wheat crop causes combine problems.  We’ve had combines plugged up a few times and it’s just been tough going with the green straw and hard threshing wheat and also the mud in the fields.  We’ve got a few days of cutting left in this area and a forecast of sunshine and highs in the 80s and 90s.  We’ll finish up here soon and move north.

All Aboard Wheat Harvest is sponsored by High Plains Journal and John Deere.  Janel Schemper can be reached at janel@allaboardharvest.com.

I saw Sierra running the Gleaner for a round and had to take a picture. 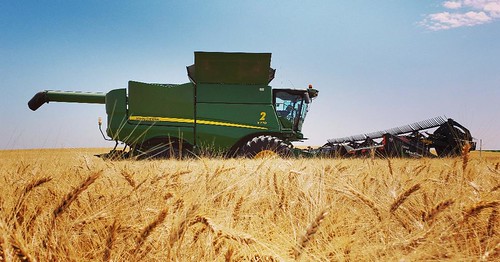 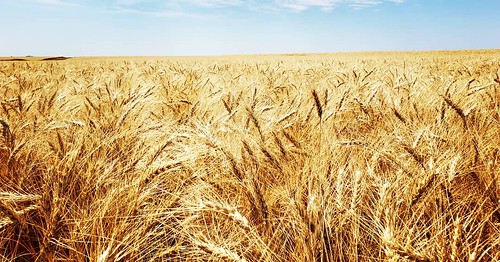 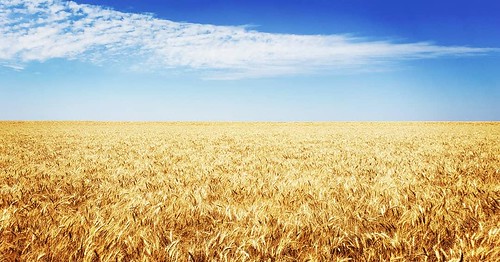 The western Nebraska sky is beautiful. 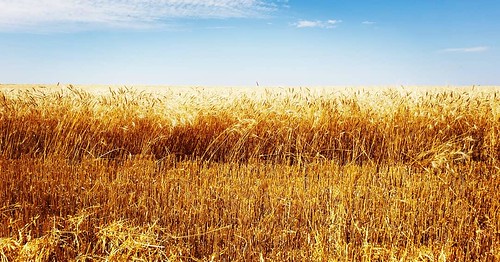 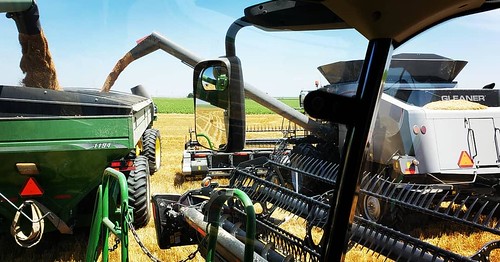 Unloading on the tractor grain cart. 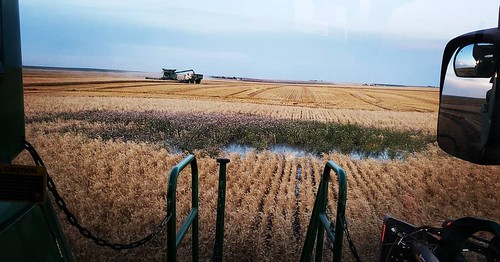 A water hole in the field.  We’ve been seeing these in almost every field. 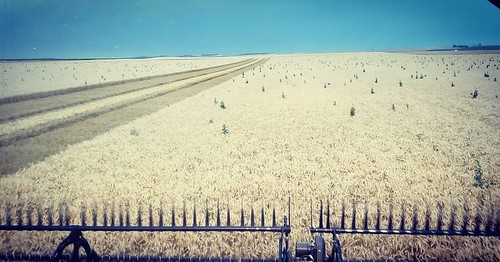 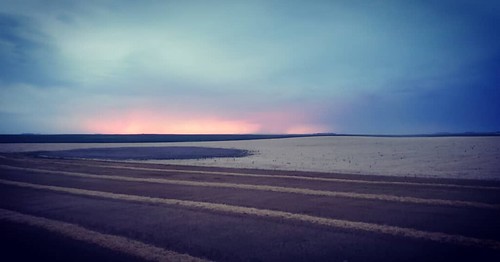 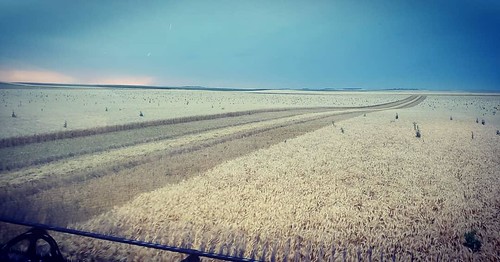 Harvesting wheat in western Nebraska.  This field made in the low 70s. 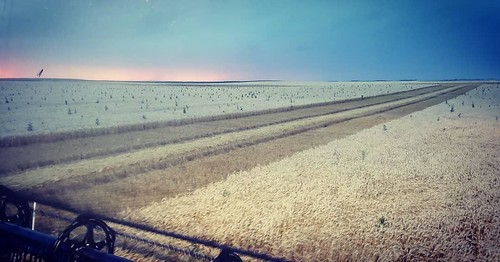 A pretty sky and luckily those rain clouds missed us!

JC running the leased Gleaner combine and had Sage and Sterling riding with him. 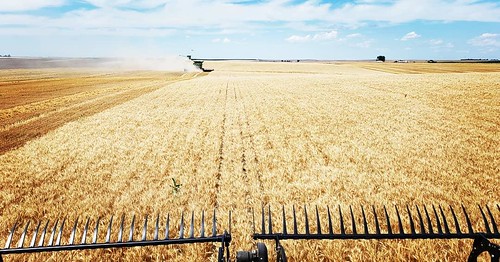 A beautiful day to cut wheat in western Nebraska. 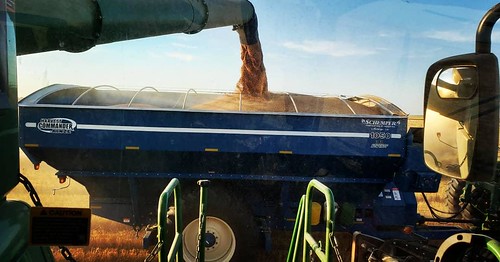 Unloading wheat on the go. 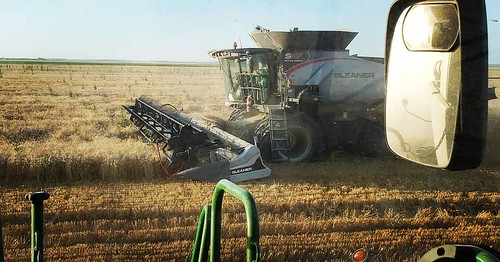 JC had a full training seat with Sage and Sterling. 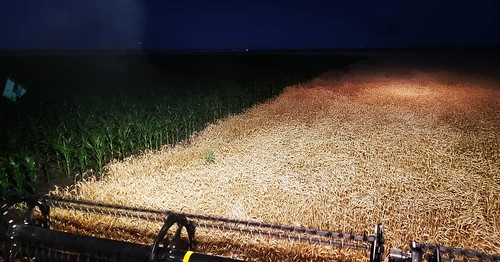 We cut til midnight and this wheat was heavy.  The corn crop is looking good. 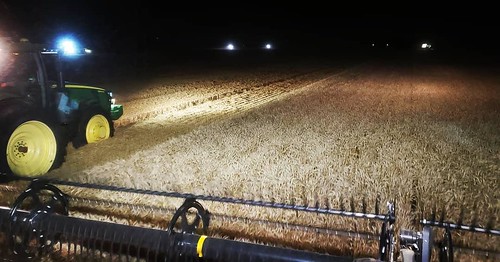 Cutting late at night and the Gleaner combine has the brightest lights.

A storm approaching.  Luckily, we only got a sprinkle out of this one. 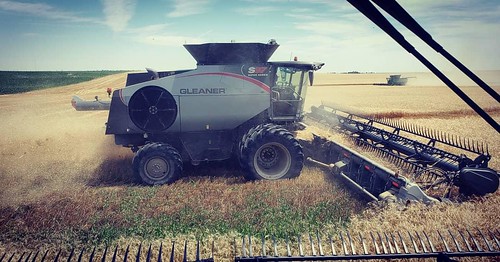 The leased Gleaner combine did a nice job of cutting wheat. 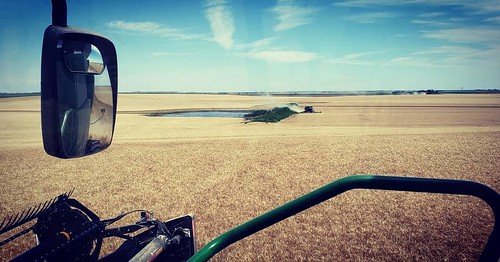 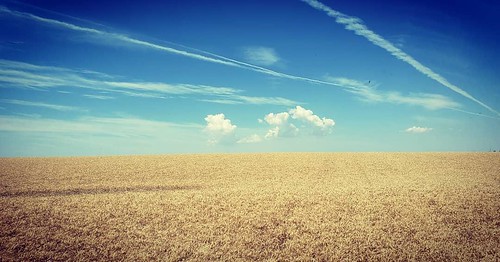 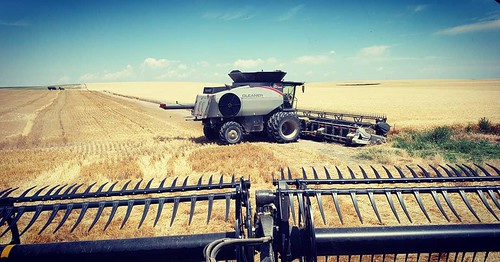 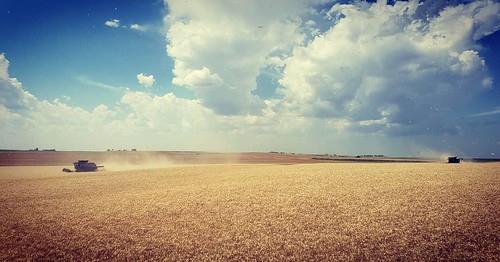 Cutting wheat on a very hot and cloudy day.

I saw this hailed corn north of Lodgepole. 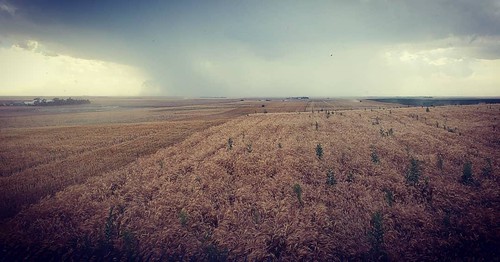 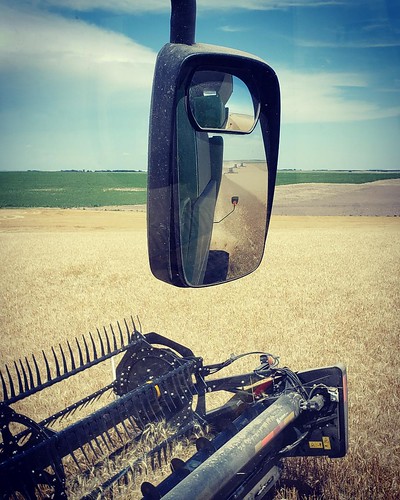 Cutting a field with five combines.

Heavy wheat causes combine problems.  The rotor was plugged up on that one but it didn’t take them long to get it unplugged.

The farmer delivers these delicious cookies to us combine operators out in the field.  That is so nice!

Heavy rains create wash outs in the field that have to be cut around.

Cutting around the wash out.

The wind was so bad for awhile.  JC and my dad were cutting just a few passes away but I couldn’t see them through the dirt in the air from the wind.

I thought for one second maybe the storm will miss us as I could see the sun for just a minute.

The storm was getting close.  There was lots of lightning and wind.  We did get rained on but it didn’t amount to much, thankfully!