Terry, Montana–I am exhausted and words are not coming easily to my foggy brain.

Our past week has been spent either preparing for the move to Montana or on the road.

The next chapter of our 2019 harvest journey will be titled, “Jordan, Montana.” This is our final stop on our route. The next time the combine is loaded, banners and flags are placed where they belong and miles are driven, it will be done for the trip back home, home.

Today marks the sixth day of driving up and down the highways–to Montana and back to Kansas and back to Montana, again. Approximately 2,400 additional miles have been added to our summer mileage tally since beginning this trek on July 30.

I was excited when we made the first trip north. We were going back to my absolute favorite stop of the summer and I was hoping to get to see familiar faces. Which I did. It was like old-home week! The Pete got parked on the main intersection of the town. The Garfield Hotel is also on this corner. As soon as the word got out that we were back in town, people began stopping. This is why I love going back. It’s like coming home again. 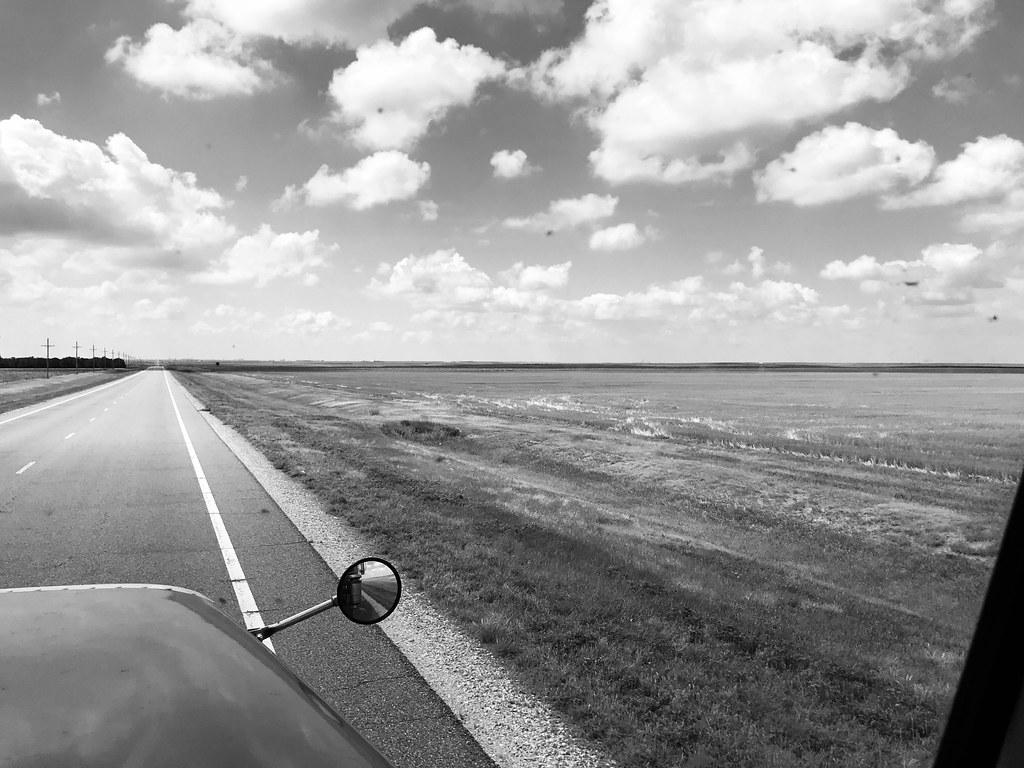 From the passenger seat of the Pete. Making our way back from Jordan to Tribune. 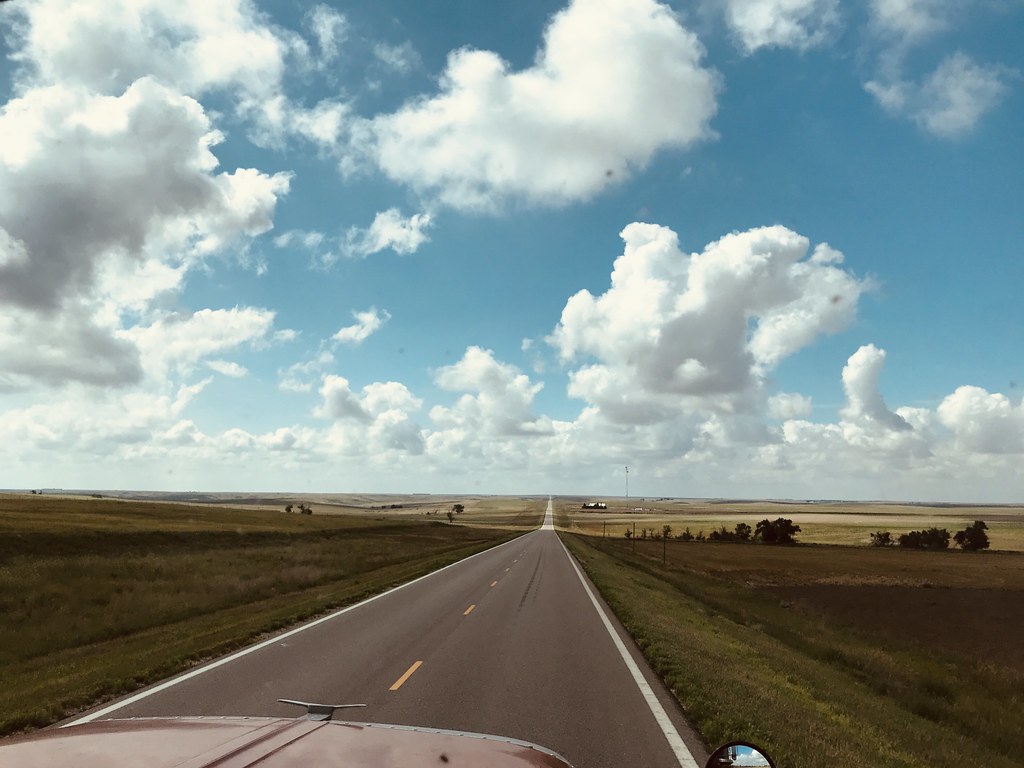 Somewhere in the middle of Jordan, Montana, and Tribune, Kansas. 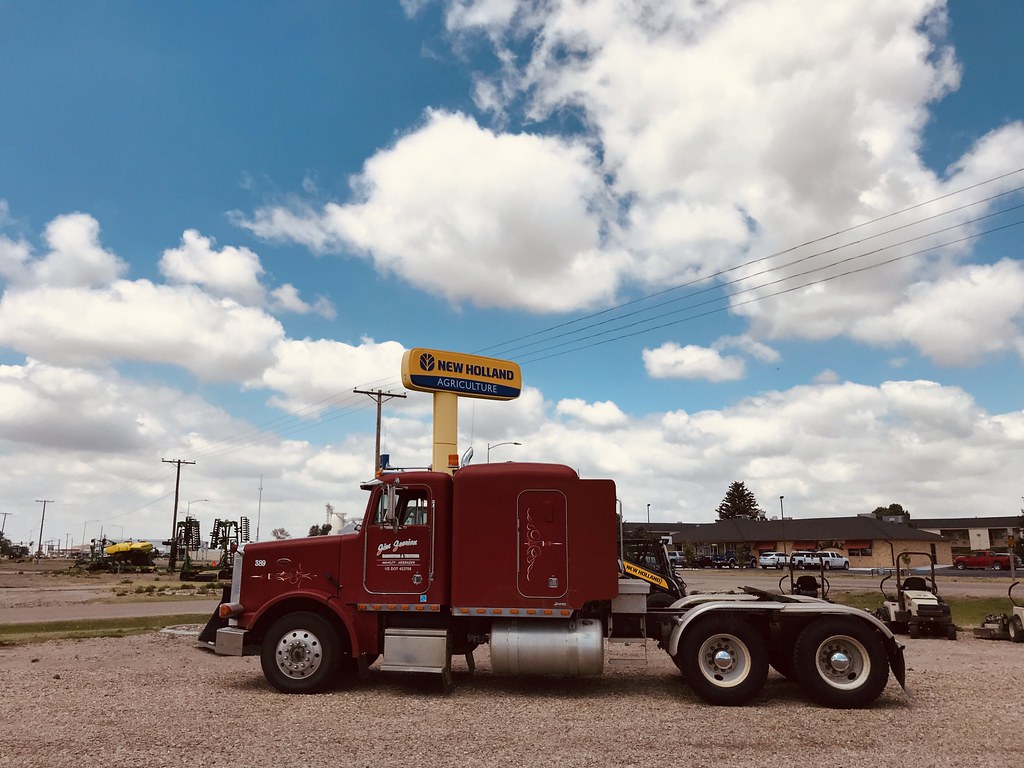 A “quick” stop at Yost Farm Supply in Goodland was a good reason to get out and stretch and to get a couple of needed items. 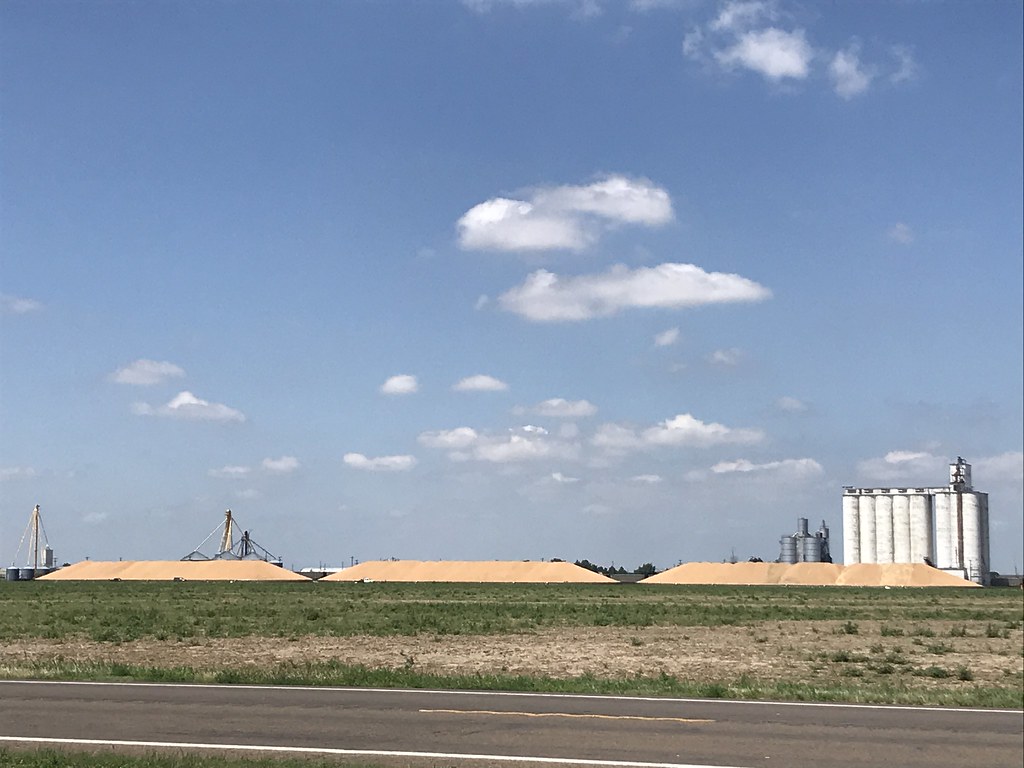 After returning to Tribune, we had loose ends to tie up—pay fuel man, pay the RV parking, fuel up the trucks, etc. While paying for our fuel, I was able to take this picture of the full bunkers at the Horace, Kansas, elevator. Jim said he heard each one held 500,000 bushels. 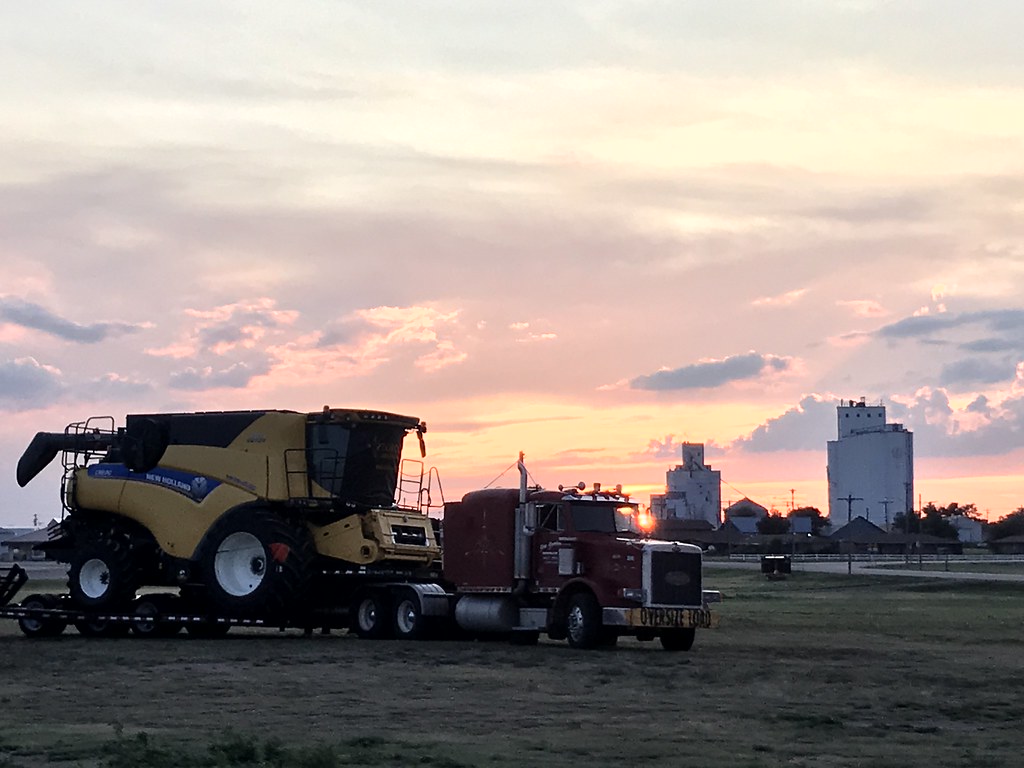 Our final Kansas sunset for the 2019 wheat harvest. Tribune elevators in the background. 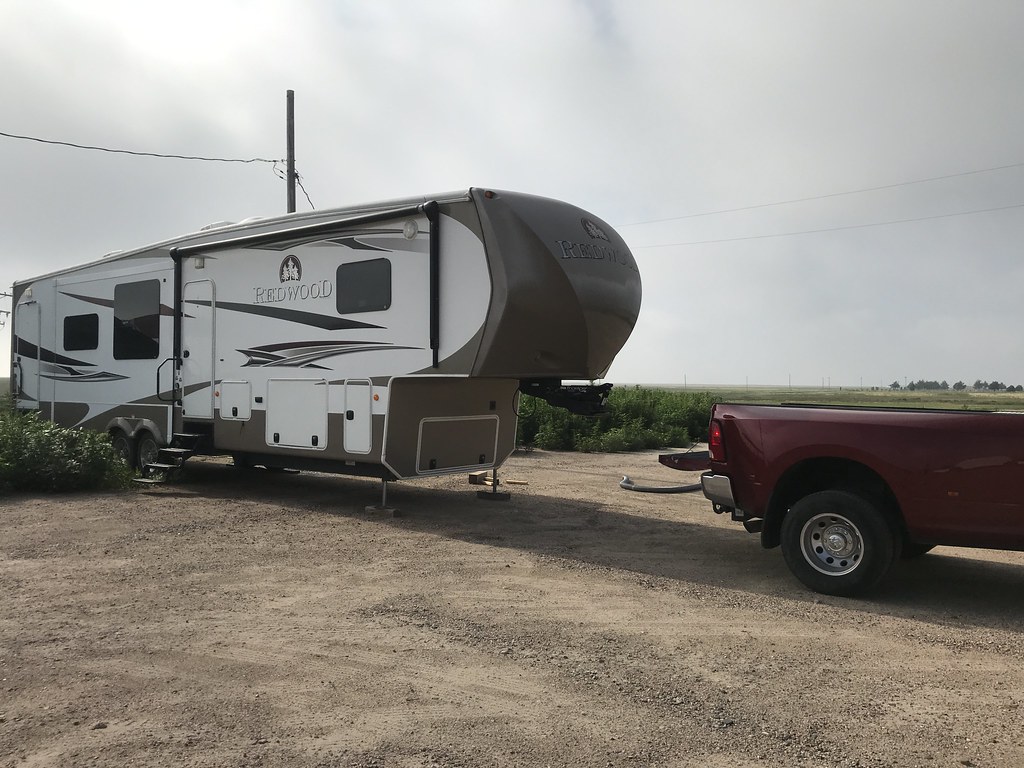 Hooking up the “cottage on wheels” and getting it ready to leave its Tribune home. 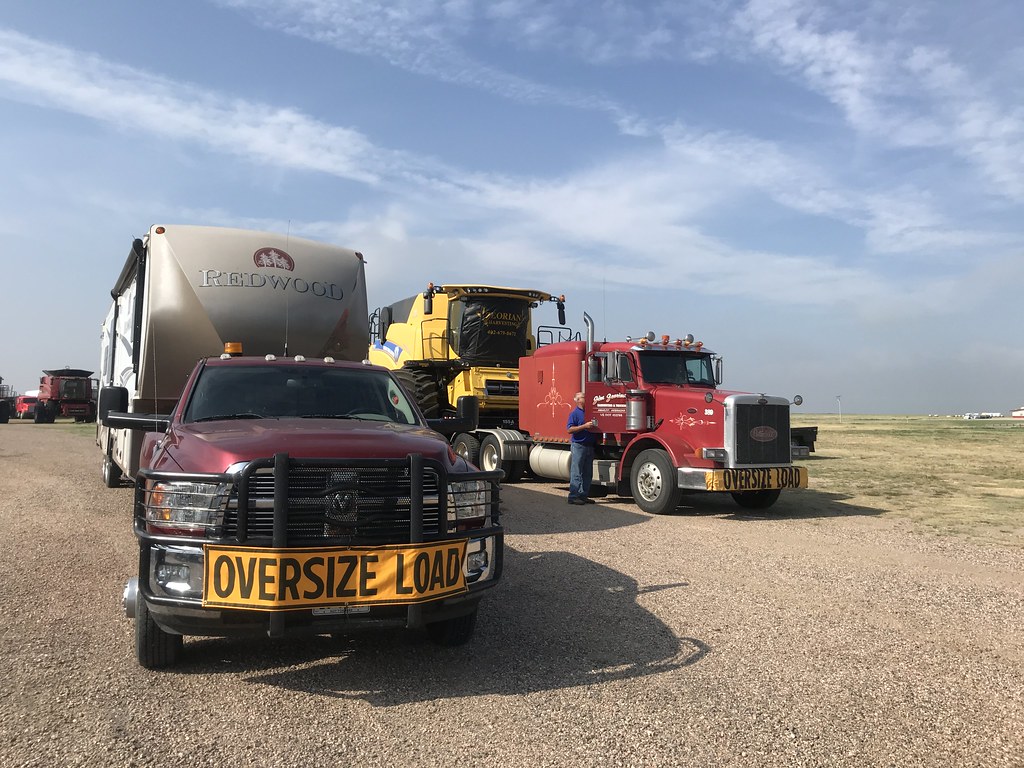 Let’s get this show on the road! Leaving Tribune the morning of Aug. 3.

As the miles started adding up, my energy level began to deplete.

Today began extra early because of the Sturgis Motorcycle Rally. The wide load could only travel the interstate through Rapid City between the hours of 5 a.m. and 9 a.m. We made it as far as Chadron, Nebraska, last night. Jim had his alarm set for 5 a.m. By the time we got the trailer house road-ready and he walked back to the “train,”  we didn’t get on the road until 5:30. We exited from the interstate at 8:30—plenty of time to spare. 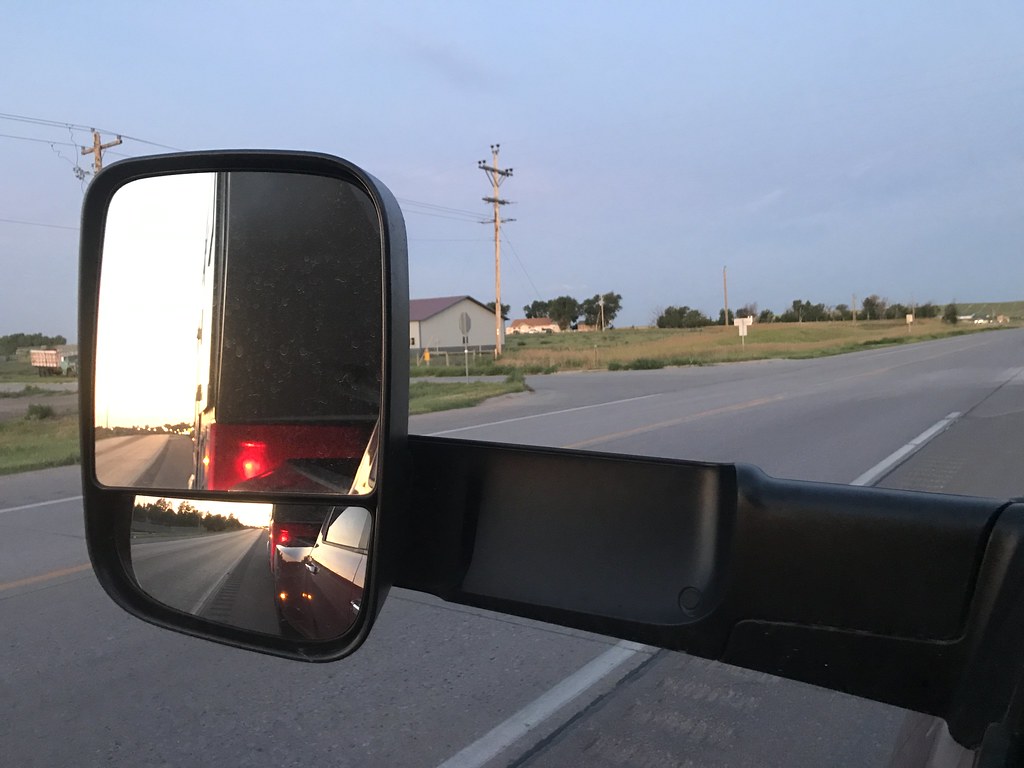 I was parked on the shoulder of the highway early this morning just outside of Chadron—waiting for Jim to arrive with the “train.”

A detour has us spending our final night on the road in a town we’ve never been to before. A bridge located just north of Miles City over the Yellowstone River is being worked on. There’s only one lane and it’s too narrow for the combine to go through. Had this little inconvenience not been in our way, we could have easily made it to Jordan tonight.

As the day grew longer and the road put us closer to a route we’ve never traveled, we opted to call it quits a little earlier than normal.  A quick search on Google resulted in finding a place to park the “cottage on wheels” for the night. 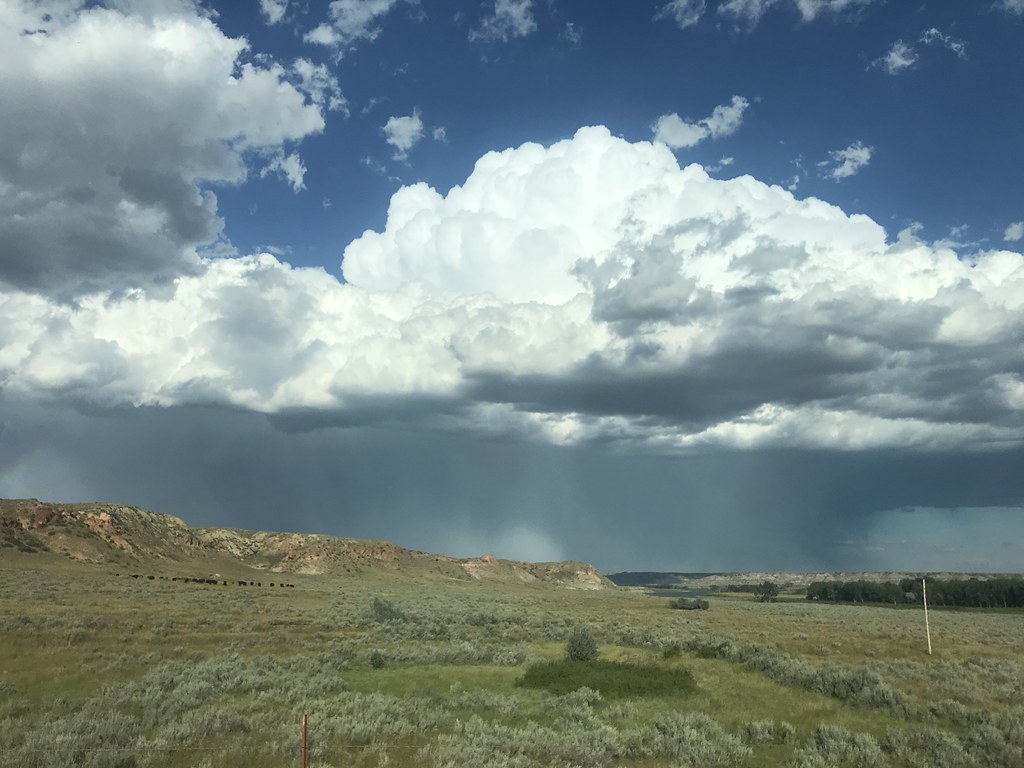 We’ll get a shower tonight, a good night’s sleep (hopefully) and be ready to conquer the narrow Montana roads between here and Jordan in the morning. I, for one, was not looking forward to the additional stress of the unknown (and narrow roads) this afternoon plus being wore down from the road. When Jim made the suggestion of stopping for the night, I was in total agreement!

Maybe I’m just getting old (well … I am) and these long days wear on me more than they used to. However, the hours and the miles we have covered over the last week have left me feeling like I’ve been around the world and back.  I’m afraid jet lag has set in.

I’m hoping when we make it to Jordan tomorrow, we will have a couple of days to catch our breath before the activity of cutting wheat starts all over again. Please cross your fingers for me.

And in four days … visitors from home!

Sandwich count–still 56 since we haven’t been cutting wheat this week.

Until next time … “You never get tired unless you stop and take time for it.”–Bob Hope