Please welcome, to the AAWH blog, Farris Brothers Inc., a custom harvesting firm from Edson, Kansas. The crew harvests from southern Oklahoma to northern Montana each summer before returning home for fall harvest.

I recently caught up with Rick at a field on the corner of 183 highway in west central Oklahoma. The field was slightly broken up, so one machine was running in the northeast quadrant while the other two worked the southwest side of the field. The grain cart picked up machines as they filled. Heat waves could be seen coming from the red Case IH machines as they cut out terraces. As we chatted about all things harvest, we were lucky to have the luxury of air conditioning in Rick’s truck on that humid, 101-degree day.

People along the trail are what make Rick Farris’s world go around. Most of what he reminisced from his many years on the road was that topic. But before we dive into those comments, we should probably learn how he got to this field off of 183 highway.

Rick told me that he thought his role in the family’s harvesting business, in operation since 1944, was probably going to be short term when he went away to college at the University of Kansas. He continued to work summers with the crew while returning to Lawrence, Kansas, during the school year, to obtain his bachelor’s degree.

“My banker let me work a winter for him right after college, but I didn’t feel productive pushing a pencil. When you see grain rolling into a truck, you can see production,” said Rick. “And as you might guess, the rest is history. Rick has been with the crew ever since.

“We had an established run so that helped. We got back to the same places each year. Every place we go, it’s almost like visiting relatives because you know so many people. You miss the ones that are gone (passed away). I’m getting up there, so that there’s not many elders left. I so respected my elders, but am not finding many anymore,” he chuckled. “The WWII generation were very nice guys and interesting.”

The people are what has kept Rick going all these years. “I was obligated to the customers and they took good care of me, too. Some of the people we cut for at home, my dad cut for their families in the early days. It’s more the people than anything.”

Speaking of people, Rick told me he had just met with a family in southern Oklahoma that used to run the café at one of their stops. They have been retired for 25 years, but the relationship still holds, and they look forward to meeting up each season.

While people can be one of the biggest joys of the run it can also be one of the biggest challenges. With more and more people losing touch with their agrarian roots, it is difficult to find a work force. Coupled with increased government regulations and overreach, age restrictions, etc., the situation isn’t easy.

Rick added, “It’s hard to get people to work. It’s also nice to hire the young kids because they learn so much. Many of the lessons they learn help them through their whole life. When they leave, they are highly marketable to co-ops and fertilizer companies because of their skills. It doesn’t matter what you know (previously) but how hard you try to learn. We hope the kids benefit from the experience. It’s hard for us to be a full-time employer due to the seasonal nature of our work. Having family in our operation is the nucleus. We used to have a friend who was a schoolteacher who would help us train the kids. We really miss him.”

The latter comment was something that kept popping up throughout our conversation. With the longevity Rick has had in the business, he has worked across many generations and there was a hint of sadness in his voice when those who have passed on or retired were mentioned. However, despite the ones now missing from the run, there is hope for the future as Rick doesn’t show signs of slowing and the new generation has taken an active role in the business. Patrick and JJ, his adult nephew and son accompany Rick on the run.

Rick spoke proudly of them both and mentioned the skills that Patrick has when it comes to automation and operating machines in the field. Automation has a real future in the business, according to Rick. A lot has changed since the family started the business and they have been active in testing new technology and providing engineering feedback to manufacturers over the years. This helps improve equipment reliability for the industry. It has also provided crew members with an opportunity to see this side of the business and the potential for job opportunities once their tenure on the team is complete.

Rick’s son JJ also grew up on the run. He too left for college, but has now returned to the business. He oversees training new crew members as well as day-to-day operations within the business.

The family doesn’t just spend time in the business but believes in giving back to the industry. One way they do this is through involvement in US Custom Harvesters, Inc. This is an association of harvesters who work together to address the ever-changing dynamics that harvesters face. Rick has been involved in USCHI since the early days of the organization. He has actively advocated at the national government level to ensure policy is in place to allow harvesters to continue to contribute to the food security of our nation. Patrick is also involved and serves on the Kansas committee to the organization.

Unfortunately, I didn’t have a chance to speak with Patrick or JJ in person. After the weather conditions we had had down south, I was not about to ask a crew to slow down for a full crew photo opp. Kansas wheat was quickly ripening up north. I did, however, have the pleasure of meeting Rick’s wife, and getting a picture of the husband and wife team. She currently has work responsibilities back home but joins the crew from time to time to visit or fill in when necessary. This trip was business as she was filling in for a crew member who, unfortunately, had to return home for a family emergency. Don’t let her absence from the crew fool you. She could run the crew if needed. We didn’t talk long before I had to hit the road and she had to head to the elevator in her Peterbilt truck.

Drought was a concern this season in southern Oklahoma. Rick reported yields of around 30 bushels an acre. The area where I met them had yields around 40 bushels per acre. With the exception of one 60 pound test weight, the remaining loads have been around 62 to 64. Protein down south was in the 11s while in west central Oklahoma it registered 10 to 10.5. 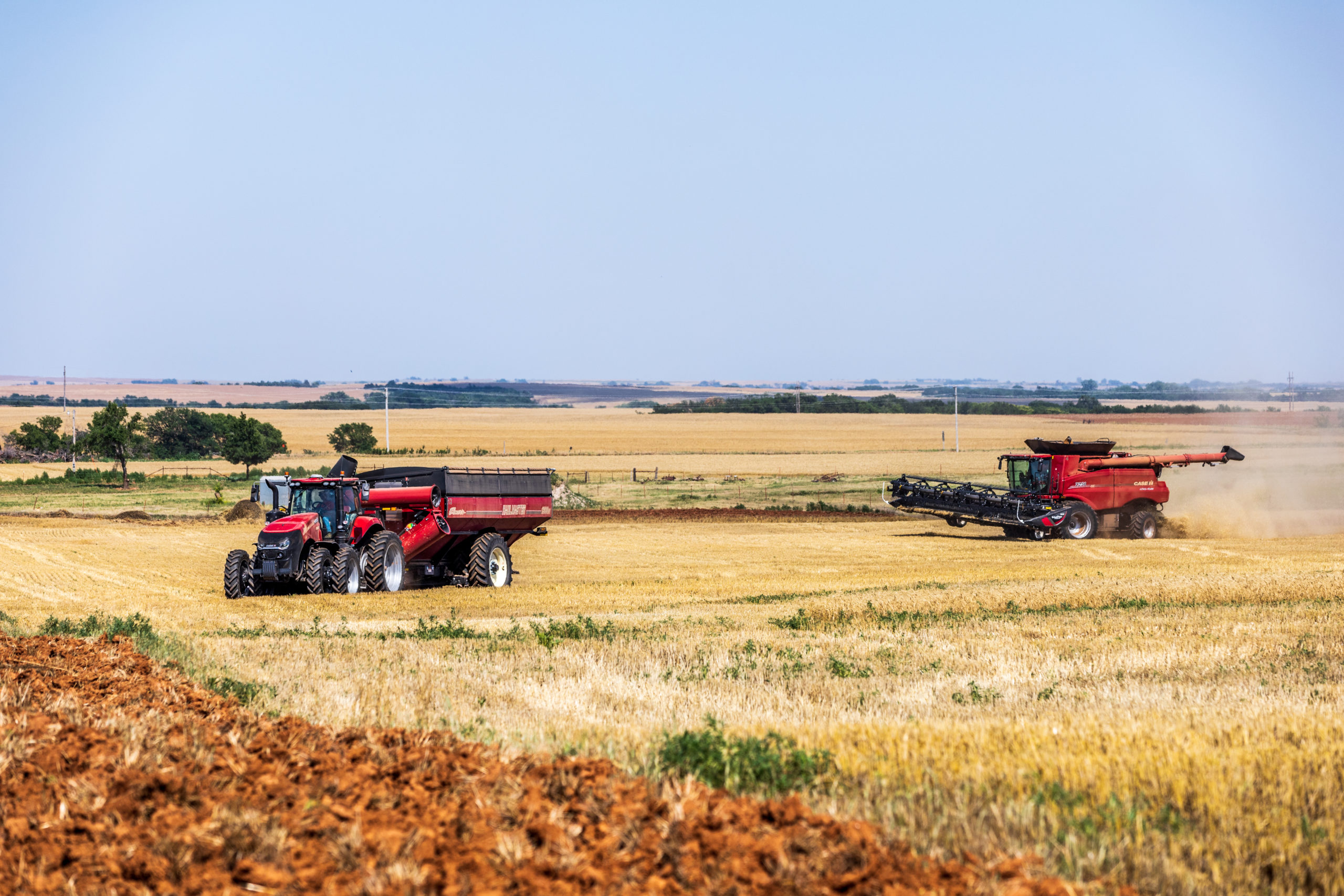 The Farris crew working it in west, central Oklahoma. (Photo by Laura Haffner.) 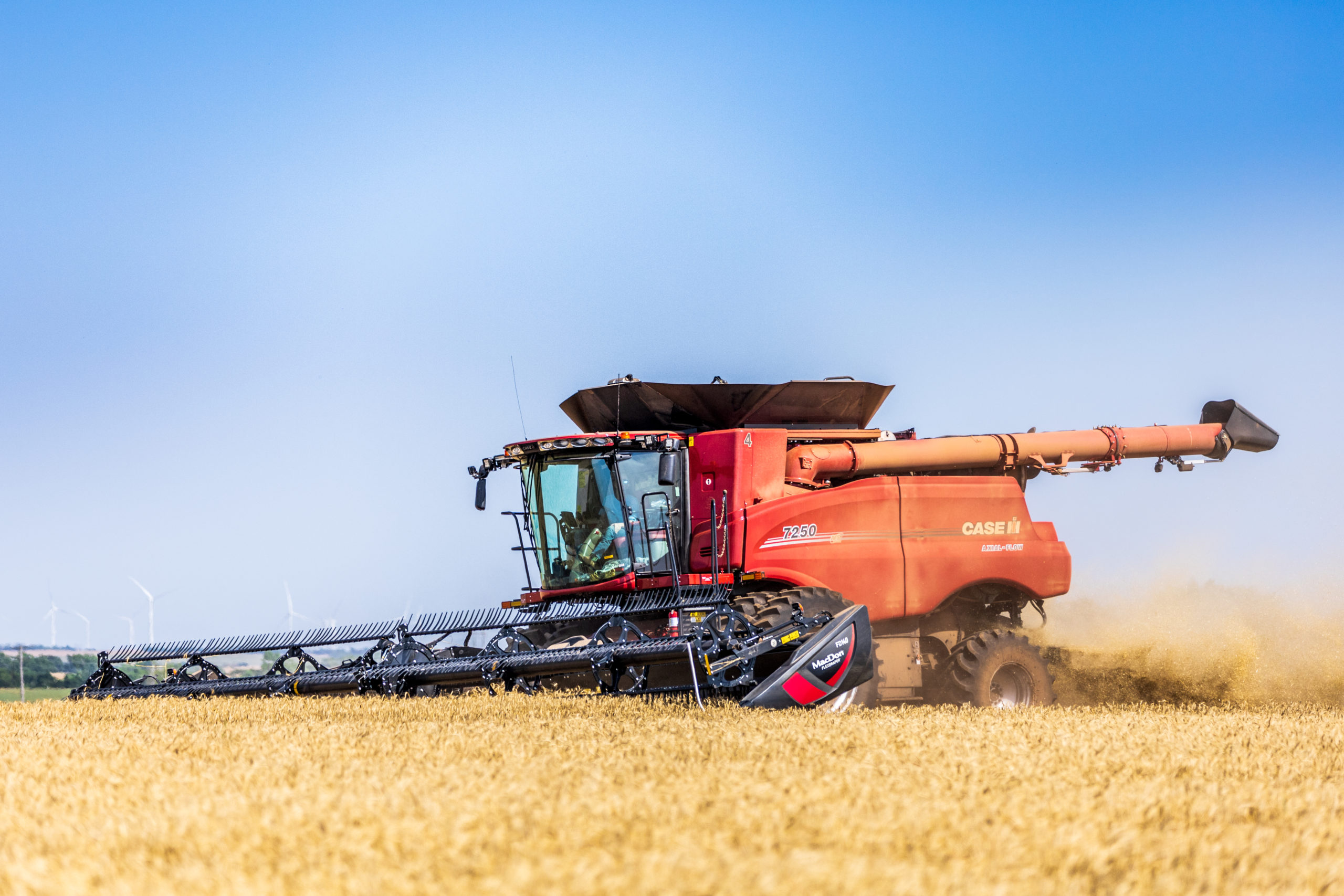 Cutting away. (Photo by Laura Haffner.) 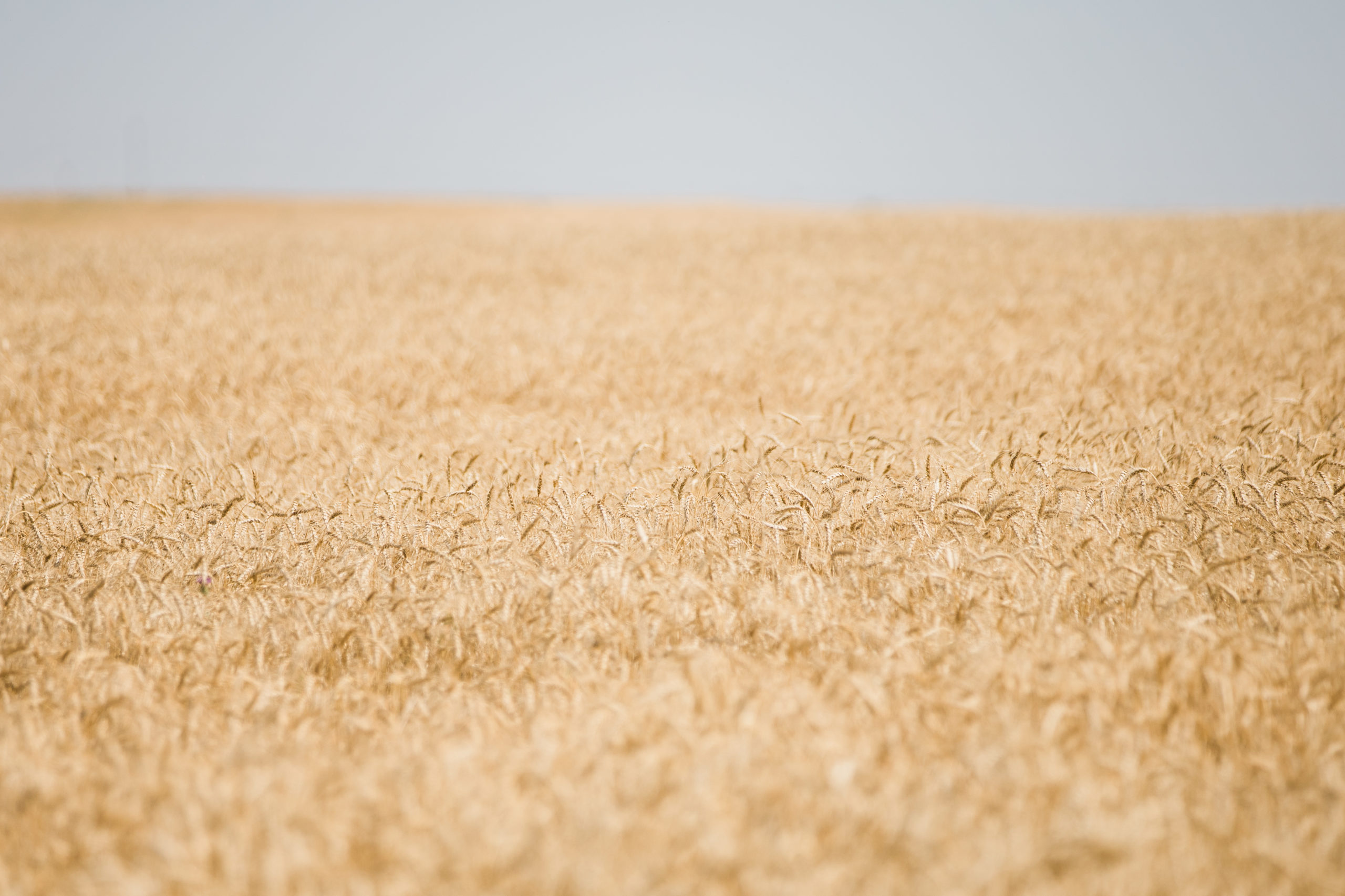 A beautiful wheat landscape in Oklahoma. (Photo by Laura Haffner.) 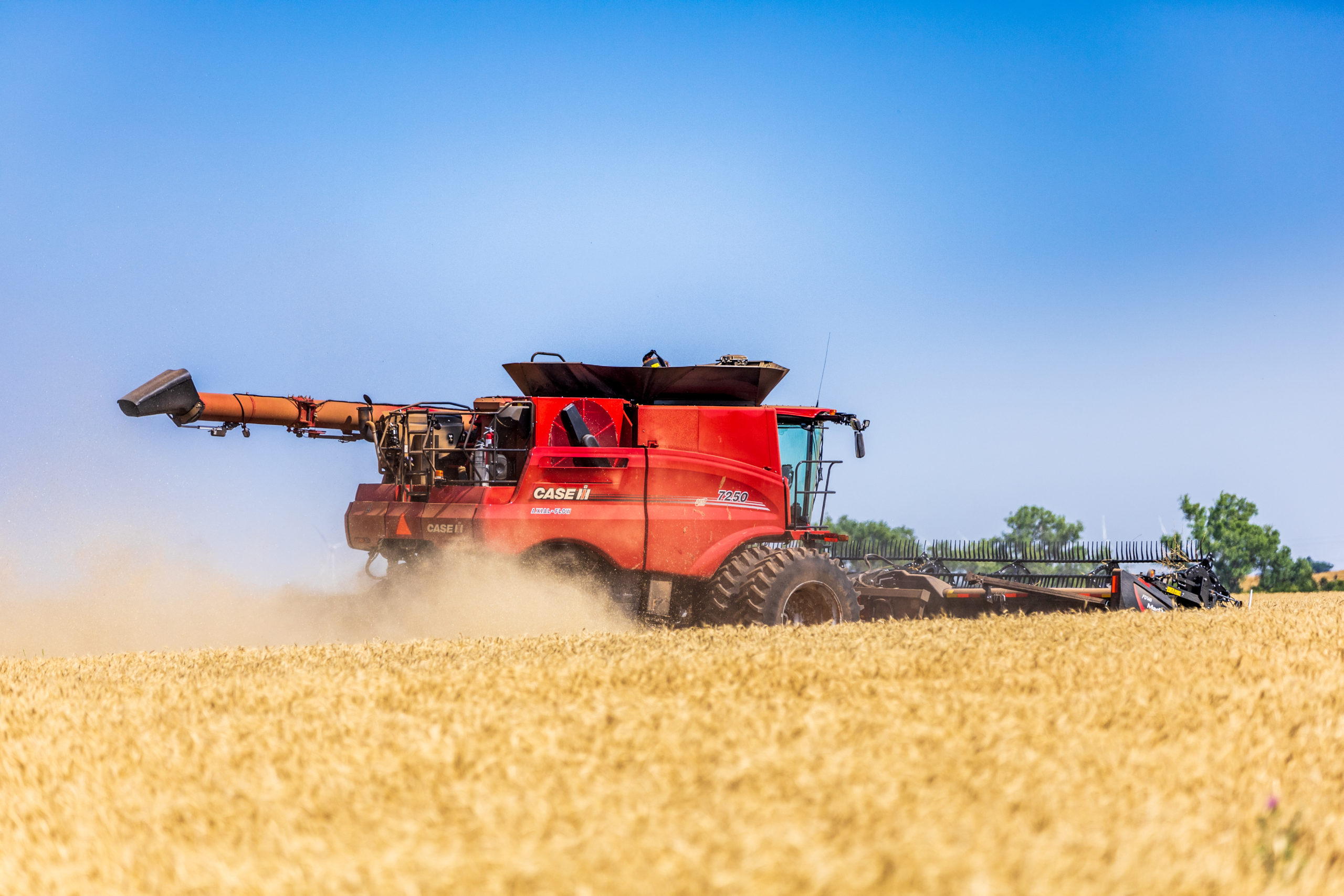 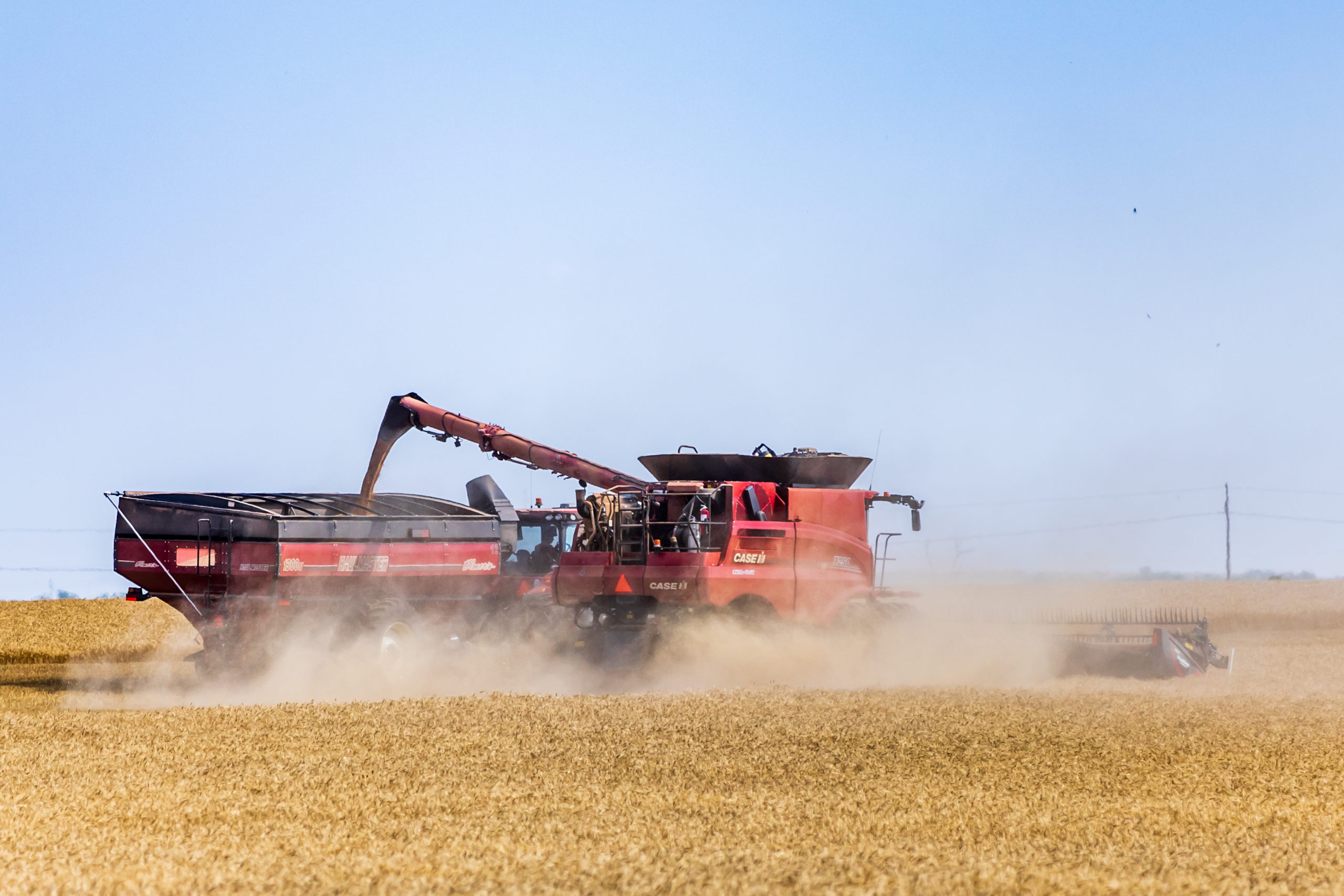 Unloading on the go. (Photo by Laura Haffner.)

Rick and Sherrie Farris pause for a quick picture before she had to take the next load in. (Photo by Laura Haffner.)