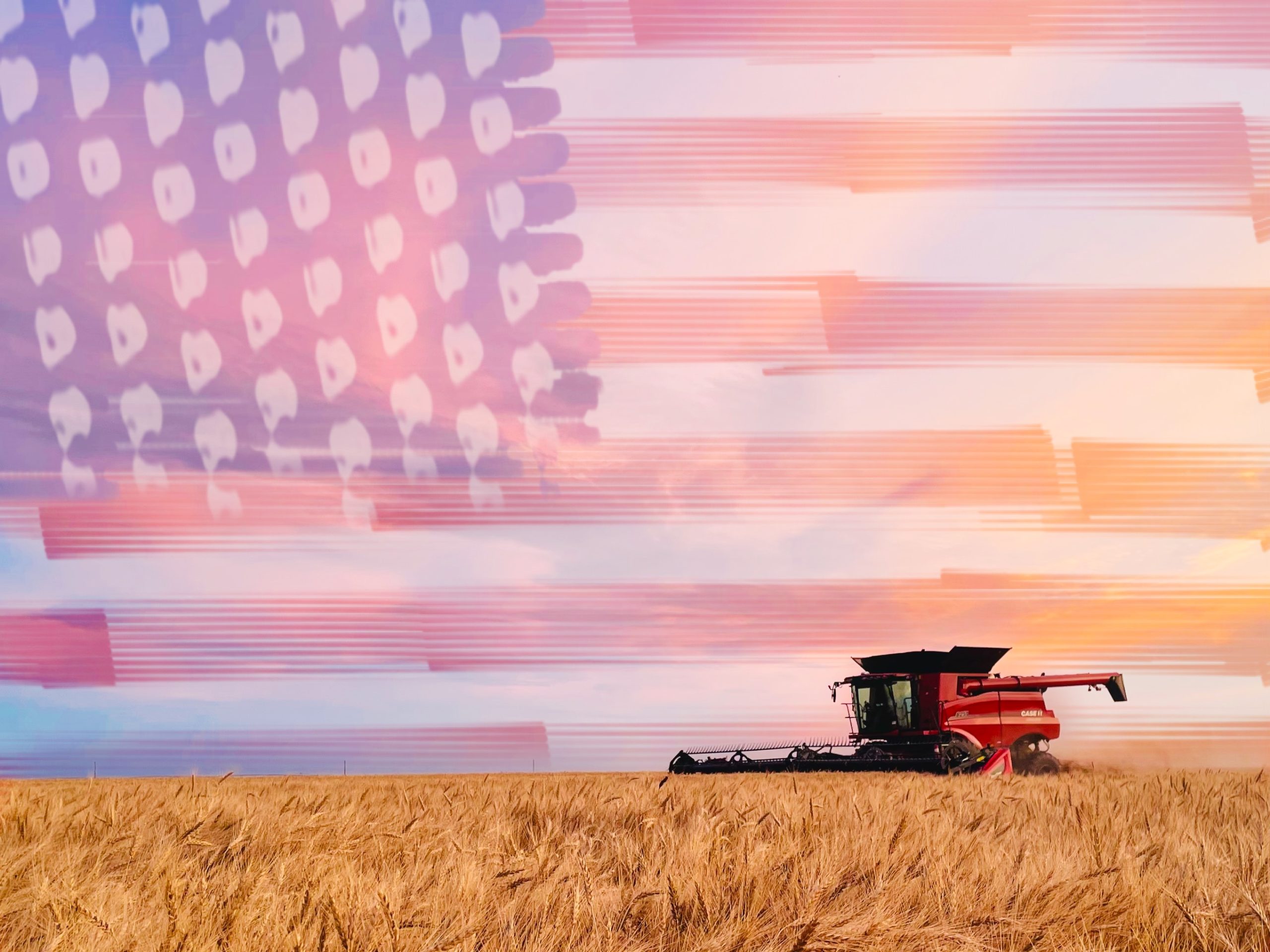 Near Dodge City, Kansas–Have you ever been in a shootout? You know, like in a gun fight on one of those old Western TV movies? The crew has arrived here just south of Dodge City, Kansas. Of course this area is known for its Wild West history, made famous by outlaws that challenged John Wayne to a duel on Hollywood’s silver screen. It seems we’ve been facing off against some Wild West weather almost every day since we arrived in Kansas. The move from Oklahoma to Minneola, Kansas, is hot and windy, the type of weather southwest Kansas is famous for. The thermometer hits 100 degrees, and my trusty weather app shows pretty good conditions for the next 10 days. Little did we know the weather was going to put up a fight, and that great harvest forecast will be proven wrong.

We harvest in two locations here, separated by approximately 50 miles. Our house trailers are parked in Minneola, but our acres in Sublette seem to have ripened a few days sooner. The next morning we move machines west to get started. We unload the combines and get right to work. The wheat looks beautiful here, with a thick stand of plants that ensures a big yield. The first few loads to the elevator indicate we are looking at 50 to 80 bushel wheat this year, and that’s pretty exciting after experiencing repeated droughts over the last few years. As the sun descend towards the horizon on our first day of harvest here it disappears prematurely behind a bank of dark, threatening clouds. There will be no silver lining this time. 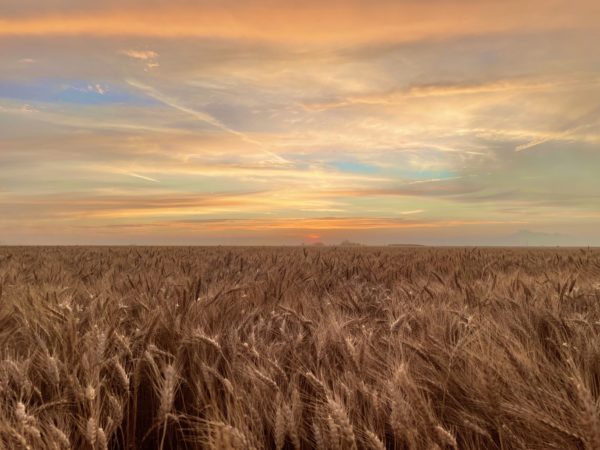 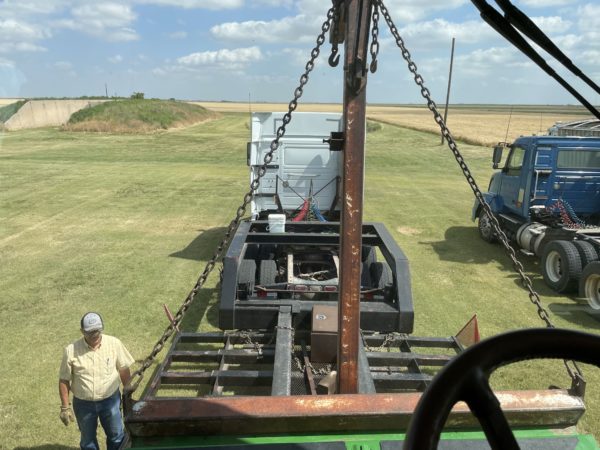 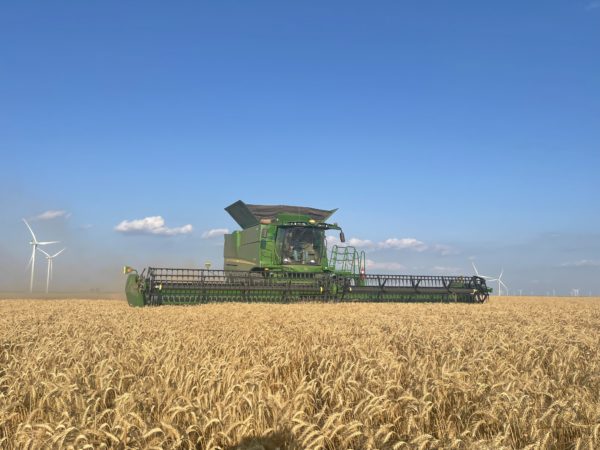 The crew arrives in Sublette, and Glen helps guide Brian as he back the machine off the trailer. It only takes a quick glance over the fields to see the beautiful and bountiful crop waiting to be harvested

A quick look at my trusty weather app shows an organized storm is brewing, and suddenly our slim chance of rain is upgraded to probable. Raindrop splatters on dusty windshields warn it’s time to pack it up and head for the edge of the field. Of course you never quit soon enough, and this always happens right at mealtime. The drive home consists of rain-soaked clothes and cold pizza. It’s a disappointing start, getting rained out on day one. We didn’t know it yet, but we had just experienced our nicest day of harvesting for the remainder of our time here. 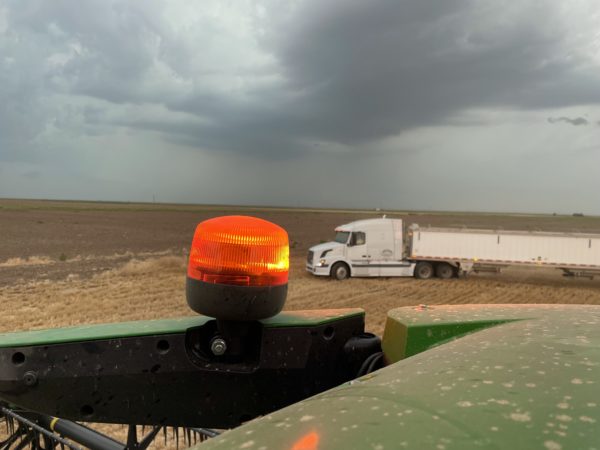 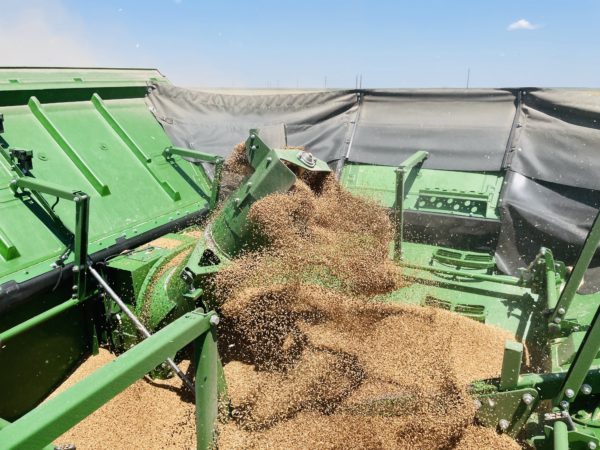 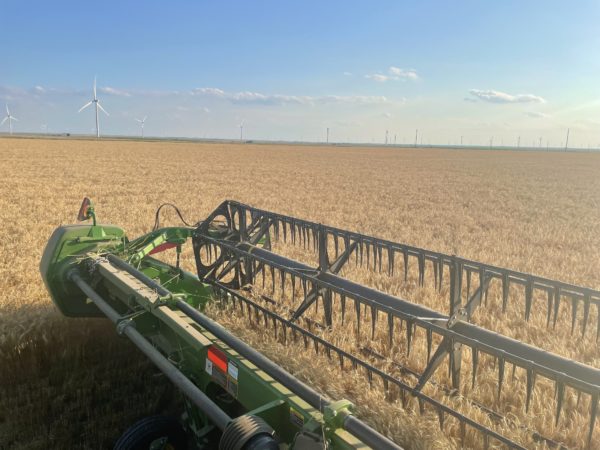 Storm clouds spoil the first day of Kansas harvest. The trucks made a mad dash back to the field from the elevator to unload the combines before the rain event starts. The 50 to 80 bushel yields means the the grain tanks fill quickly.

The following day is a preview of the weather we will experience for the next 12 days. Cloudy skies, high humidity and highs in the low 80s is the new normal, and we sit for two days unable to run. Another glance at the trusty weather app indicates we could be in a holding pattern indefinitely. With a crop this nice you can’t risk waiting forever, and the decision is made to run if the moisture stays under 16%. Elevators don’t normally take wheat this wet due to long-term storage concerns, and if they do there is a drying cost charged to the farmer. It’s a small price to pay with yields this big and market prices this high. Rain clouds and sprinkles taunt us as we finish in Sublette, and we never deliver another dry load of wheat after that first day. 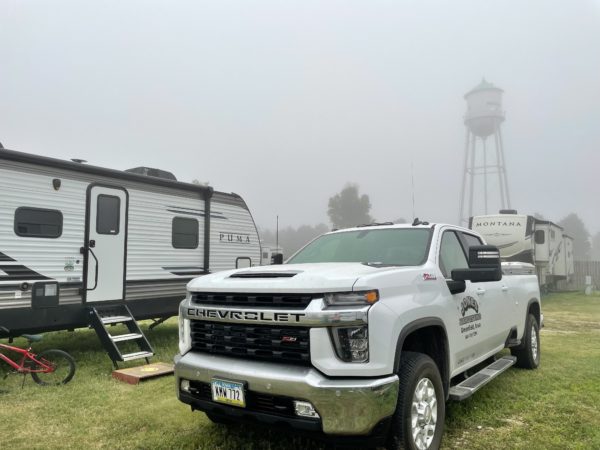 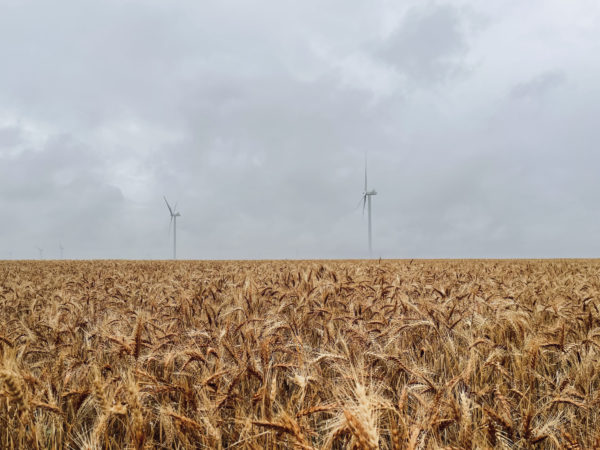 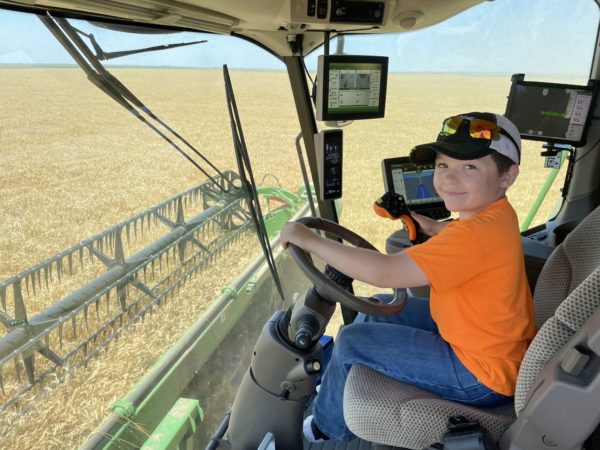 Unwelcome morning fog, gloomy skies and clouds thick enough to obscure the tops of the wind towers sometimes spoil another potential day of harvesting. Young Ezra wishes the weather would shape up so he can continue his apprenticeship as future combine operator.

We’ve been feeling the pressure to be in two places at once. We hurriedly shuttle equipment back east to Minneola, but our efforts are in vain. The next morning a dense fog sets in, and afternoon clouds with the occasional sprinkle idles us for another two days. But this time there is a silver lining, as our down time coincides with some visitors we have been eagerly anticipating. Some of Cameron’s family paid us a visit from Nebraska, and a friend from Iowa joins the crew for a day spent in Dodge City at the famous Boot Hill. Known for its cowboys and historic cattle drives, everyone enjoys stepping back in time by touring the newly opened museum filled with a detailed history of the area. Yes, there actually is a Boot Hill where unidentified individuals who drew their guns too slowly in a shootout were buried with their boots on. Drinking sarsaparilla at the Long Branch Saloon really was a thing, and indeed the West was just as wild as the TV shows depicted. 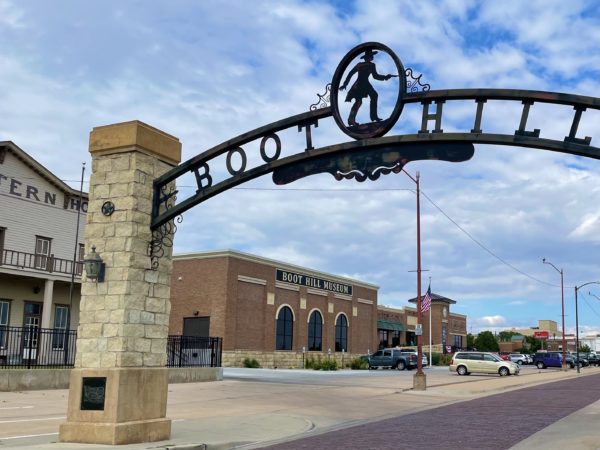 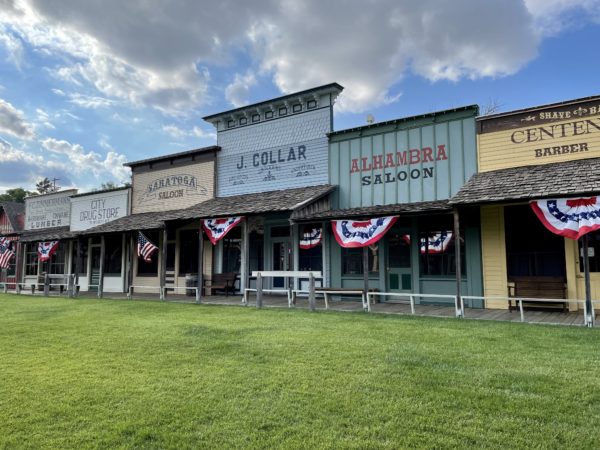 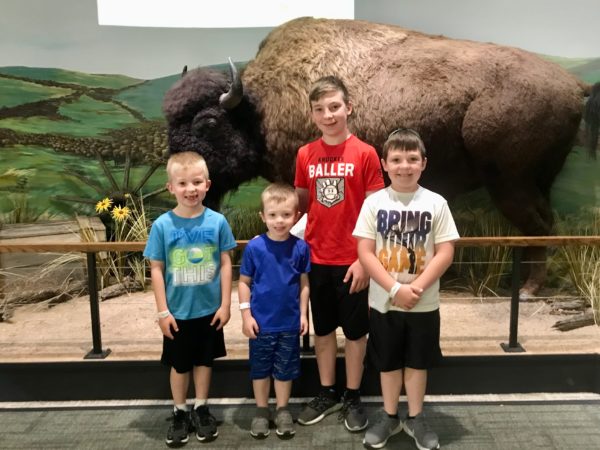 You can’t be in Dodge City and not visit the historic Boot Hill. The Hamer boys check out the impressive museum and get up close with a buffalo. The recreated main street transport you back in time to the wild west.

Apparently our weather was taking inspiration from the Wild West as well. Those hot and windy days my trusty weather app promised never show up. Unruly storm clouds continue to appear almost every evening, and farmers here also decide that taking wet wheat is better than a hailstorm taking it first. I’m not sure I’ve ever seen this large of an area harvest so much of their crop this wet. I do know a majority of it would still be in the field if we had waited for dry wheat.

Flat fields paired with a grain cart allow us to cover a lot of acres each day, despite rarely starting before noon. We run late into the night, well past what is considered ideal conditions. The straw becomes harder to chop, and the machines slow down to allow more time to separate the sticky, damp grain. If there has ever been a time to push the envelope, this is it. We spend the Fourth of July in the field watching fireworks on the horizon from surrounding towns. In the end we somehow manage to finish in five days what looked like it might take five weeks. Of course the following day while loading equipment the temperature finally crept past the century mark once again, almost as if to taunt us. Where was this weather when we needed it the most? 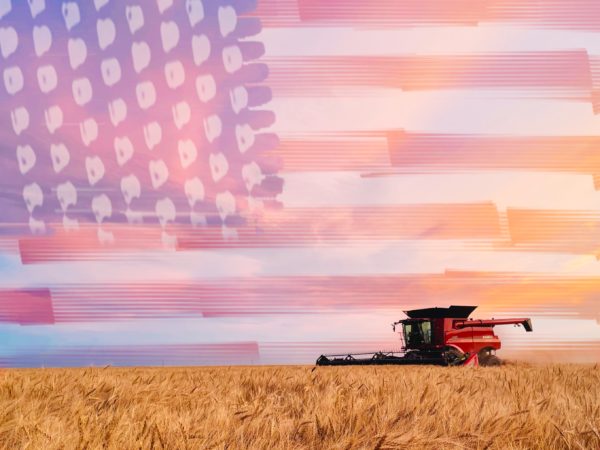 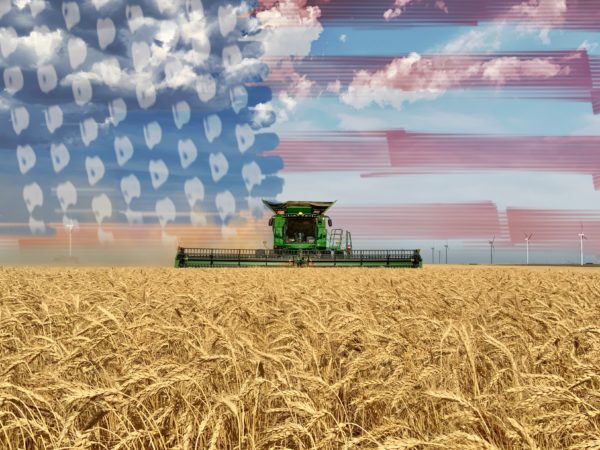 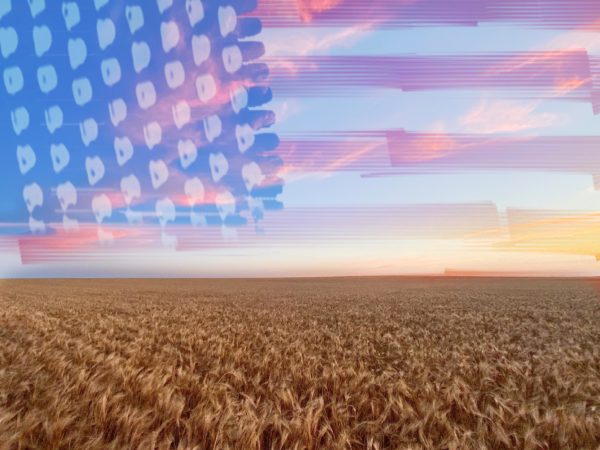 There is nothing more American that wheat harvest on the Fourth of July, and the crew celebrates by spending the day harvesting. Amber waves of grain mimic the stars and strips that wave in the wind on this historic day.

Come to think of it, this entire Kansas harvest has almost been like an episode from an old Western TV show. Some Wild West weather rode into Dodge City looking for trouble. There I was drinking my sarsaparilla, minding my own business when that wild weather tried to steal my triple-digit temperatures. I was a little slow on the draw, but once the smoke cleared it became apparent I was the better shot. Now I don’t know if the weather wears boots, but I know I’d like to bury it on Boot Hill after the past two weeks. I would dig it a grave right next to where I buried that trusty weather app that promised me all that hot, windy weather. They got what was coming to them, and law and order has been restored. Our Kansas harvest is over, and I think it’s time to get the heck out of Dodge. 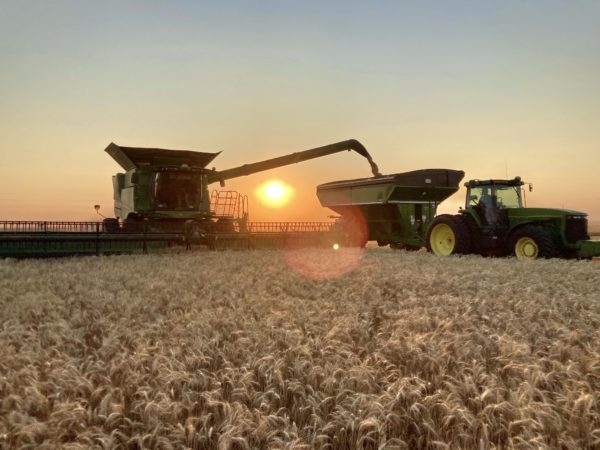 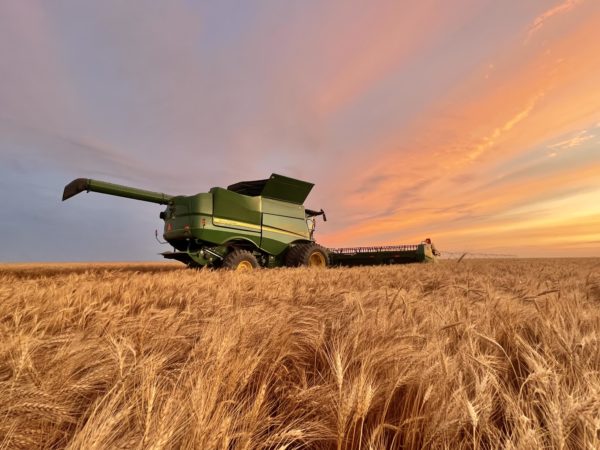 Kansas provides another beautiful sunset that just seems to smile for the camera. Wheat, wind turbines and power poles all share the same space, providing fuel, food and fiber from the same field at the same time.