All Aboard Harvest | Brian: Bringing home the gold
20990
post-template-default,single,single-post,postid-20990,single-format-standard,qode-quick-links-1.0,ajax_fade,page_not_loaded,,qode-title-hidden,qode-theme-ver-11.2,qode-theme-bridge,wpb-js-composer js-comp-ver-5.4.7,vc_responsive 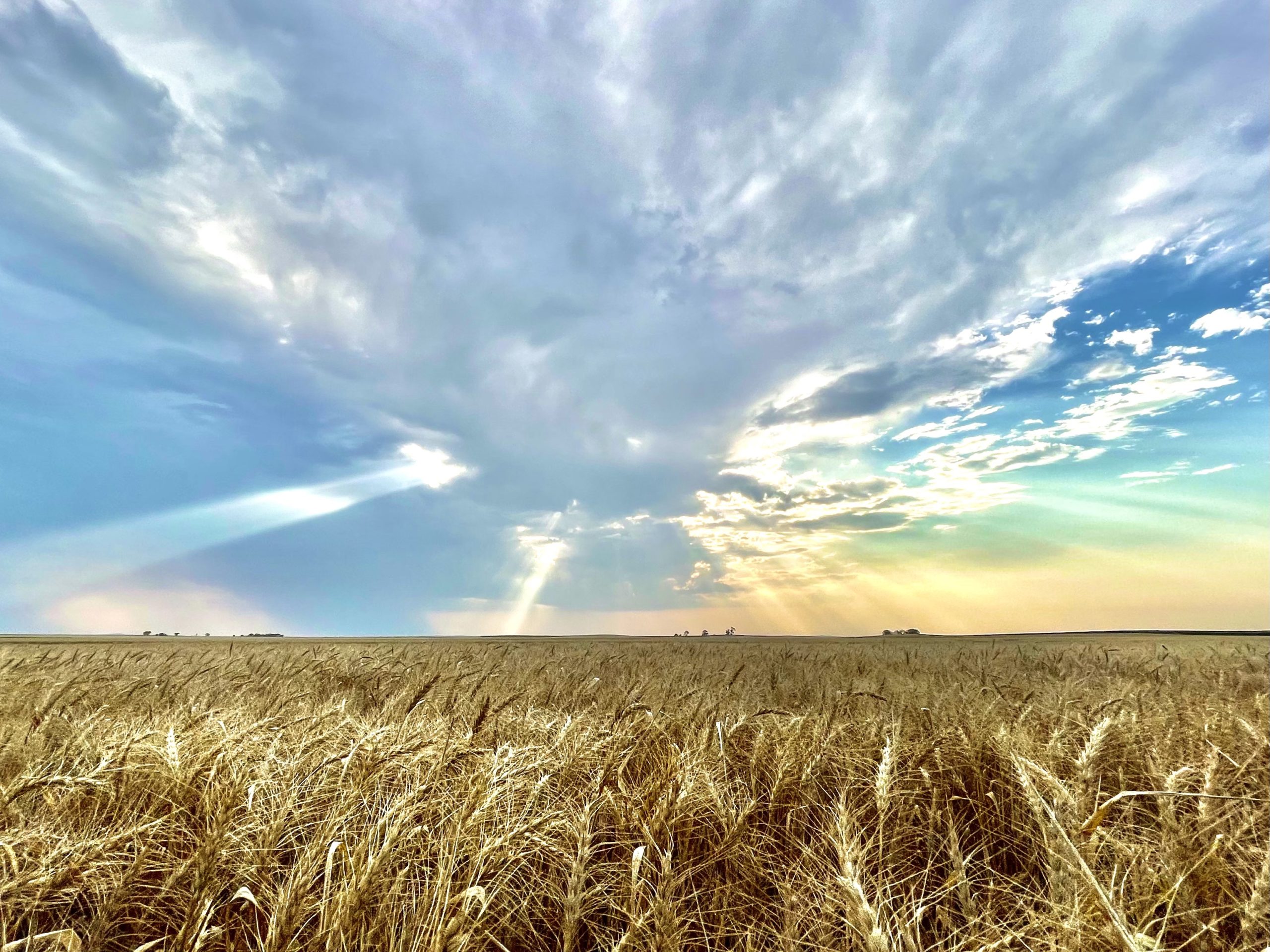 Onida, South Dakota–Like athletes who have been training for the Olympics, the crew has been training all summer long for a victory lap. We have come around the final bend, and we see the last few acres of this summer’s harvest come into view. We’ve been working tirelessly day after day, racing to cross that harvest finish line. We’ve guaranteed ourselves a spot on the podium, but will we bring home the gold? 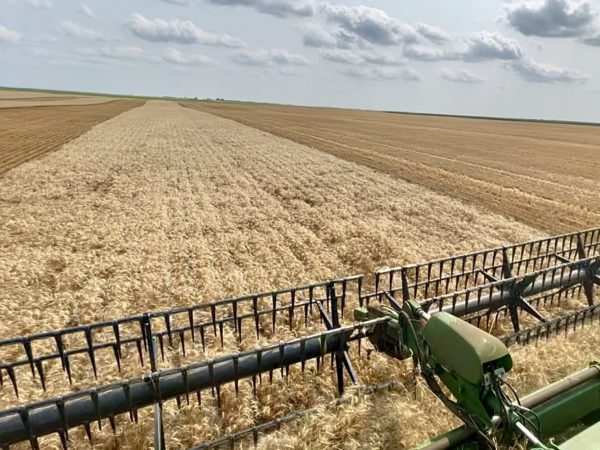 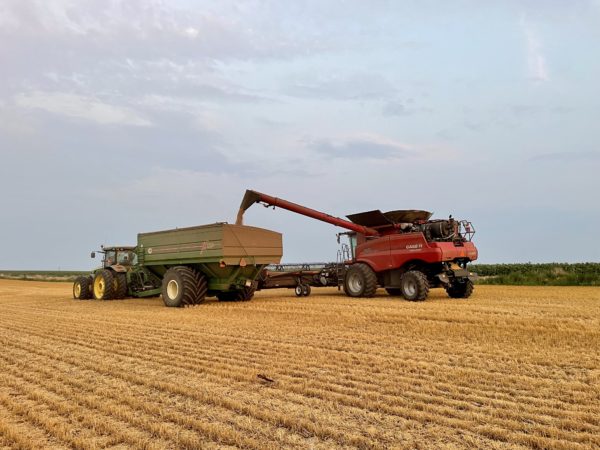 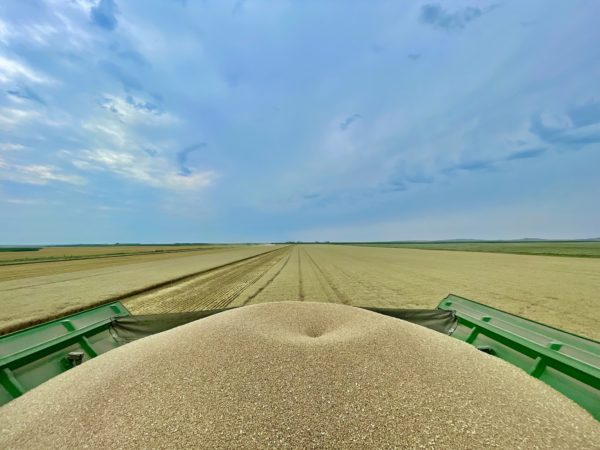 The grain cart follows us around, waiting to see that mound of golden grain appear atop the grain tank.  Long rows stretch on for what seems like forever some times in the large South Dakota fields.

This year’s harvest schedule has seemed like an endless marathon, and a few days off sounded like a golden opportunity. But with the hot, dry weather we’ve had no such luck. Some years there is a significant break between winter and spring wheat harvest, but this year we finished our last winter wheat field and started our first spring wheat field the same day. The crew sprinted to the finish of our South Dakota harvest, but we almost felt like it was over before it even started. 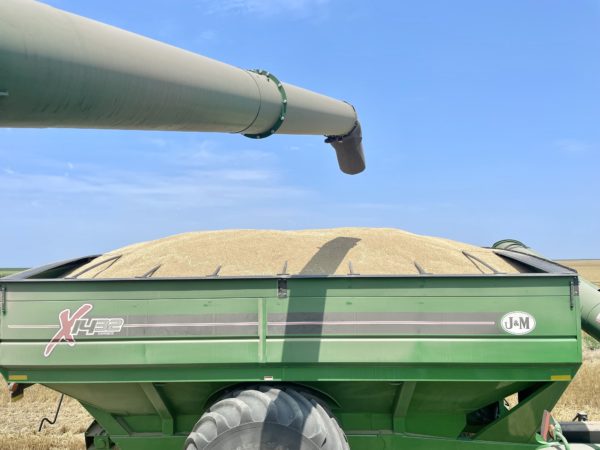 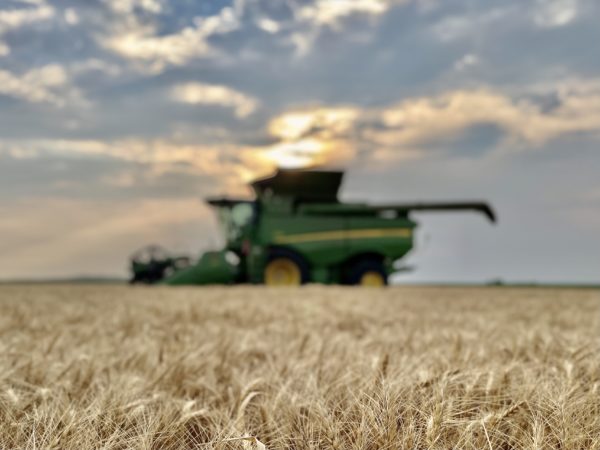 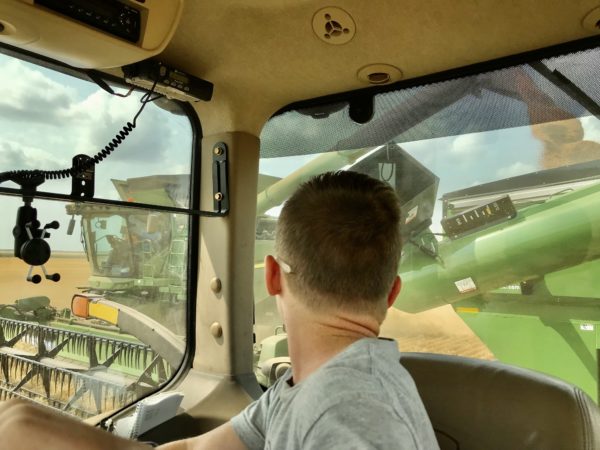 These big, open fields are an ideal place to learn the ropes of equipment operation. With close supervision, Titus drives the grain cart while Ezra unloads the combine on the go for the very first time. It’s a proud parent moment.

The drought took a serious toll on the spring wheat here, and the yields reflected that. Fields lucky enough to have caught a spotty rain shower occasionally produced 35 bushels per acre, but the majority of the spring wheat here averaged closer to 15 bushels per acre. Some fields had single-digit yields, and a few were not worth harvesting at all. The fall crops have also suffered here in a big way. It feels like we have reached a tipping point. If the corn, soybean and sunflower crops don’t receive substantial moisture in the next week a significant yield reduction is imminent. This has both farmers and harvesters worried. Uncooperative weather affects everyone, and a poor wheat harvest followed by a poor fall harvest is a scenario nobody wants to talk about. Let’s cross our fingers they won’t have to. 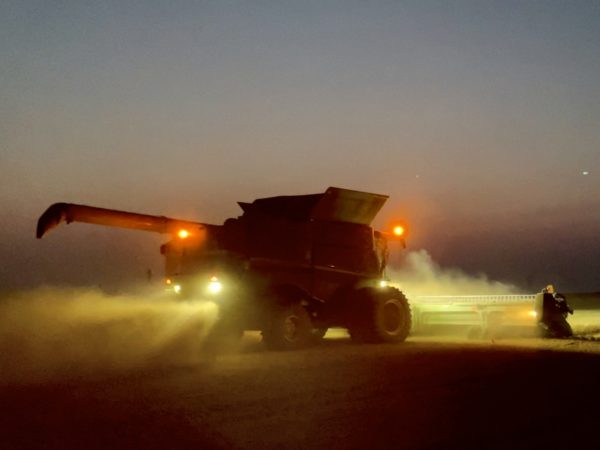 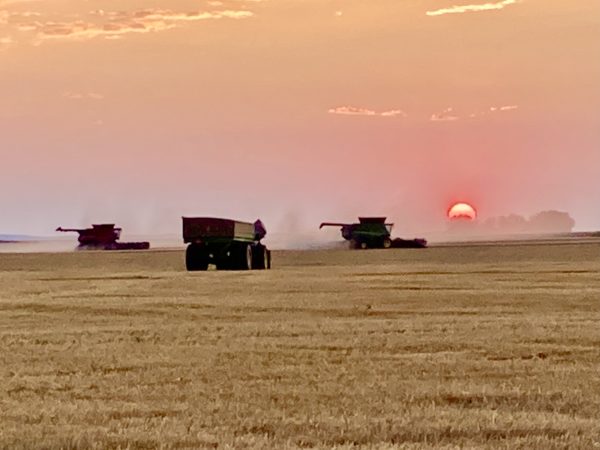 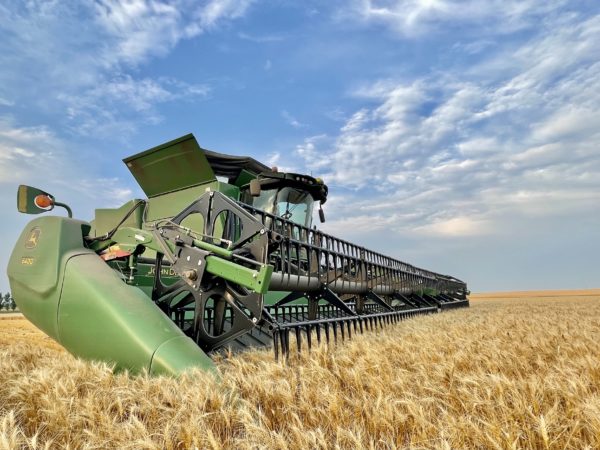 As night falls, a bright red sun sinks behind a smoke-filled horizon every evening in South Dakota. Even during the day the smoke from forest fires in Canada create a haze that can be seen and often smelled.

Agriculture is a dangerous occupation, and every day there are plenty of opportunities for a mishap. Hauling oversized loads down narrow rural roads is one of our biggest safety concerns, and there are plenty of moving parts on machinery to cause serious injury in the blink of an eye. But the one thing that harvesters fear the most is a field fire. This year’s dry conditions in South Dakota were ideal for that, and we saw more than one plume of smoke off in the distance that made us feel a little sick to our stomach. After 39 fire-free years we finally experienced that panicked moment of seeing flames in our own field. The fire was very small and easily spotted in the dark. Calm winds and quick thinking allowed an army of fire extinguishers to squelch the flames before any real danger existed. 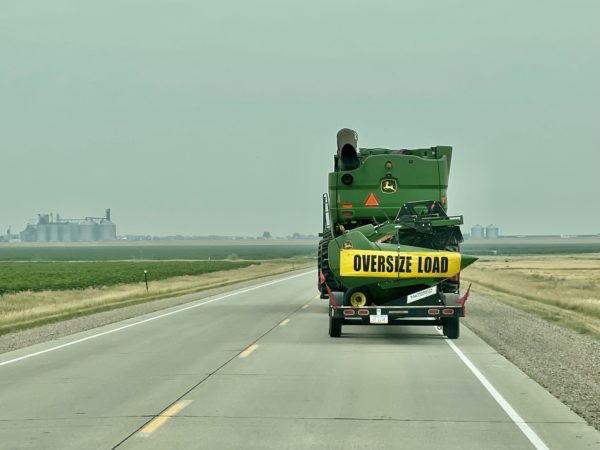 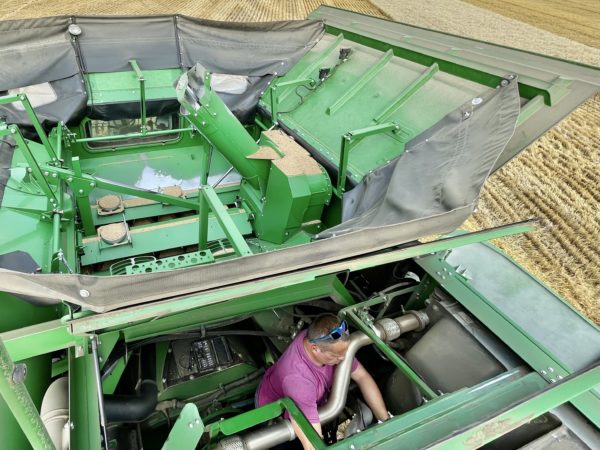 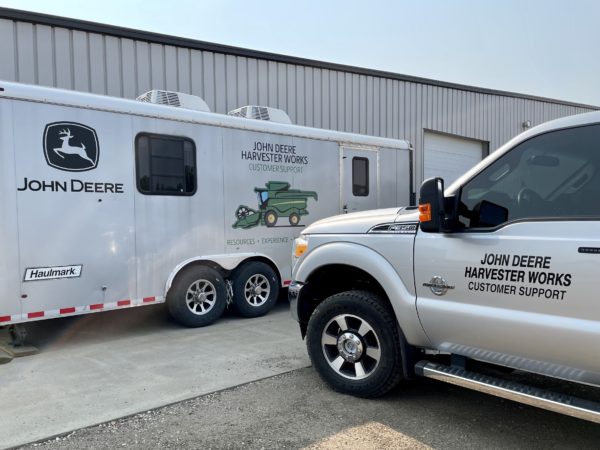 Hauling large equipment down narrow roads means careful attention is a must to avoid an accident. When working around equipment safety precautions are never optional. With the help John Deere’s traveling factory-based support, Brian replaces a faulty valve inside a very hot engine bay courtesy of the sweltering sun paired with exhaust pipes.

It’s not exactly the type of story a crew wants to talk about, but it seems a missed opportunity to not share the risky realties we face each day of harvest. We work in a fire-prone environment, and no matter how well maintained or new your equipment is some things simply can not be anticipated or prevented. In this case we determined a failed bearing dripped hot grease onto some chaff that smoldered long enough to eventually start a fire. We are grateful God saw fit to spare us from a tragic outcome, but I assure you the adrenaline in those few moments lasted long enough to prevent most of us from getting much sleep that night. 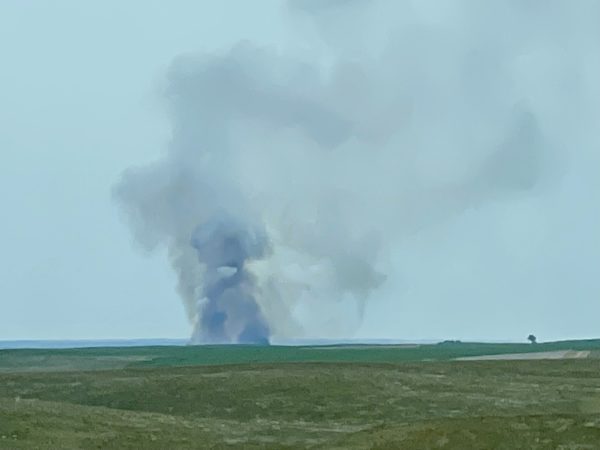 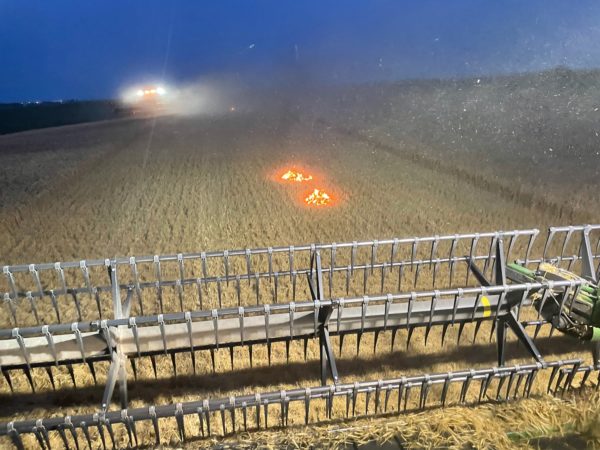 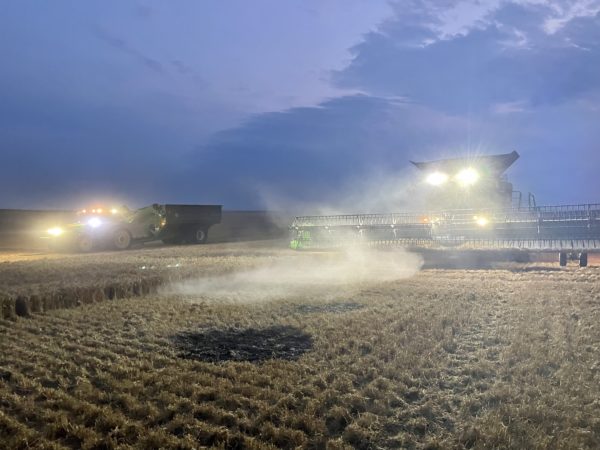 The camera zooms in on plume of smoke in the distance, but little did we know we would have our own field fire just days later. There is no such thing as a trivial fire, and we were fortunate this scary experience didn’t turn into a call to the fire department.

Many harvests over the years have been fast paced, but this summer will be remembered as a relay race. We passed the harvest baton from state to state seamlessly, each time unloading equipment and going straight to work upon arriving at a new location. No week-long rain events. No waiting for green wheat to ripen. Just harvesting in high gear. After 39 years on the harvest trail, this is the shortest wheat harvest we have ever experienced. The crew spent just 58 days on the road, and this is the first time we have ever finished in July. Rain only kept us from harvesting one day in Oklahoma, two days in Kansas and one day in South Dakota. Last year we spent 46 days harvesting in just South Dakota, only 3 days fewer than we spent on the road this entire summer combined. That’s a pretty shocking comparison and a perfect example of just how much weather plays a role in this occupation. 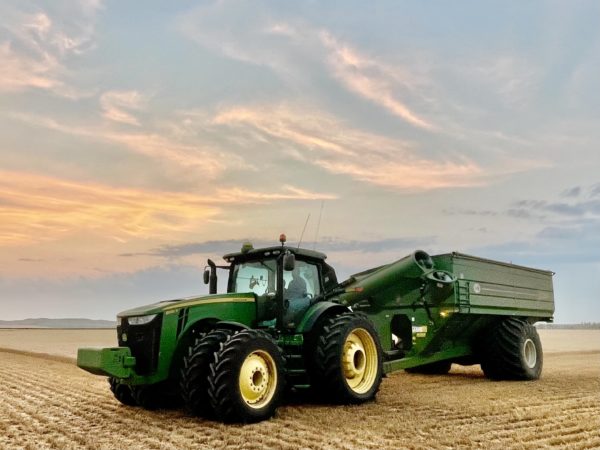 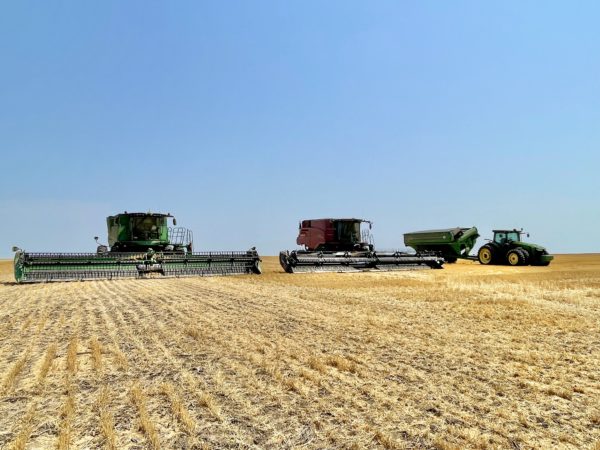 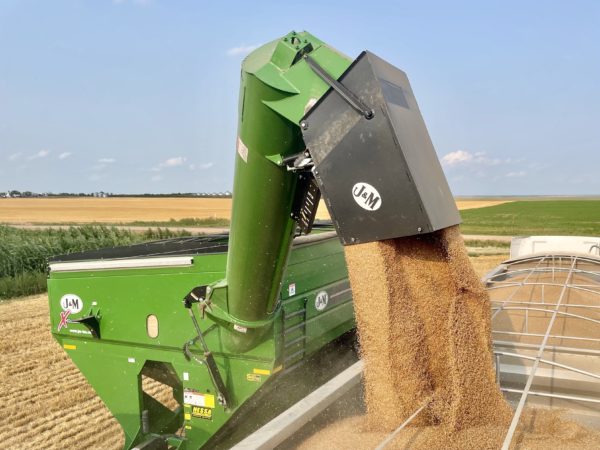 The crew arrives in the field for our final day of harvesting. It’s a bittersweet moment as the combines complete their last pass and the grain cart offloads the final bushels into the last truck.

Moving equipment back to our respective homes in Iowa and Minnesota went smoothly. Everyone has settled back into their homes that suddenly feel enormous, rediscovering life not spent in a rectangular aluminum box on wheels with a hitch. Two-inch plywood walls no longer separate the bathroom from the kitchen, breakfast is no longer shared with ten people, and a refrigerator that holds more than two days of groceries seems remarkably luxurious. A few of the us take the opportunity to visit the Black Hills around Rapid City for two days before moving back home–a nice way to celebrate finishing another successful year. 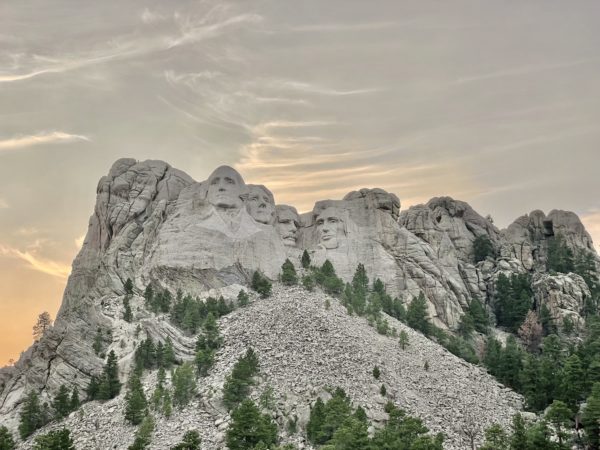 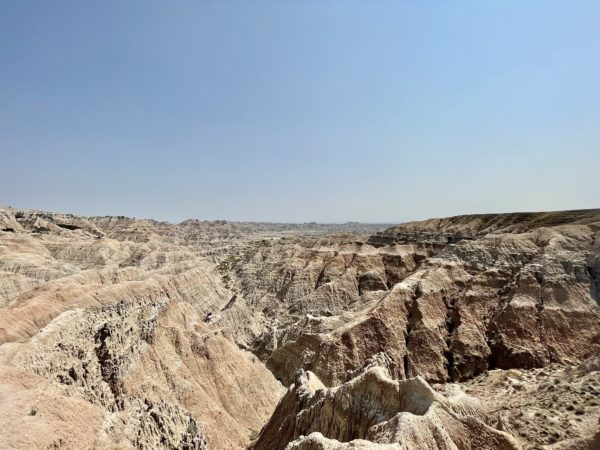 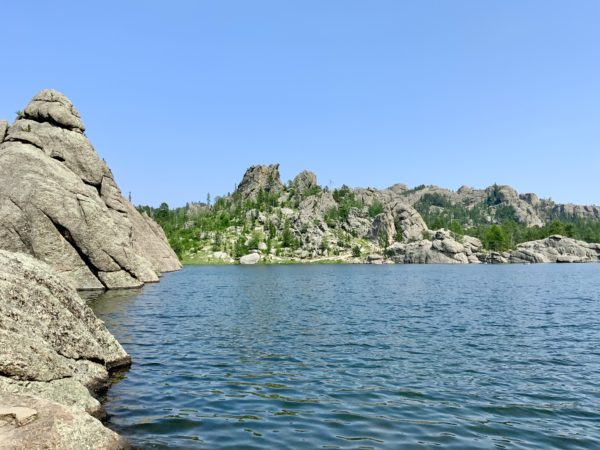 A short trip to the Black Hills provided a dramatic change of scenery but no reprieve from the heat. The pickup indicated it was 113 degrees F outside, but we still enjoyed visiting Mount Rushmore, Sylvan Lake and the Badlands.

Our summer raced by so fast it’s hard to believe it’s already over. Speaking of races, I’m pretty sure the crew earned gold after this summer’s marathon harvest. But it’s not the kind of gold you hang around your neck or put on a shelf to display after an Olympic victory. Instead we are rewarded with the sights of golden sunsets slipping behind the horizon, the sounds of golden wheat rustling in the warm summer breeze, and the smell of fresh cut golden straw. It’s that rewarding feeling you get when you accomplish something truly special. I know you understand, because you feel connected to the land that produces this golden grain just like us. We don’t do it for a place on the podium at the gold medal ceremony. We simply do it for the love of the harvest. 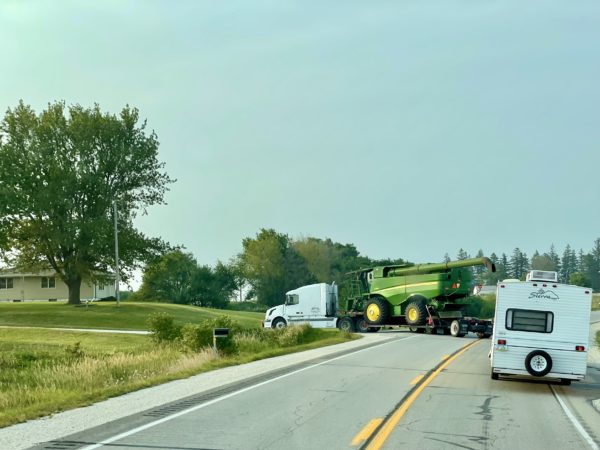 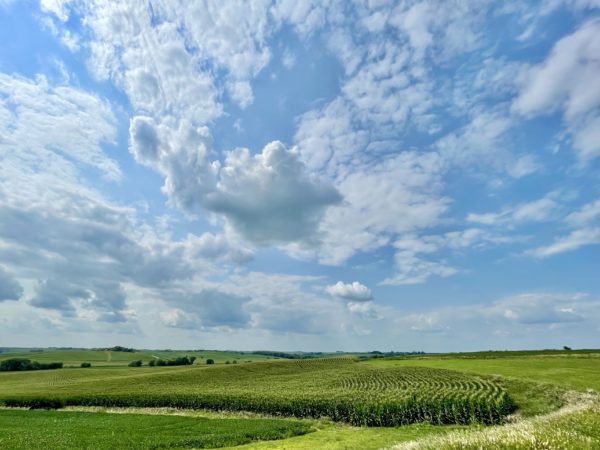 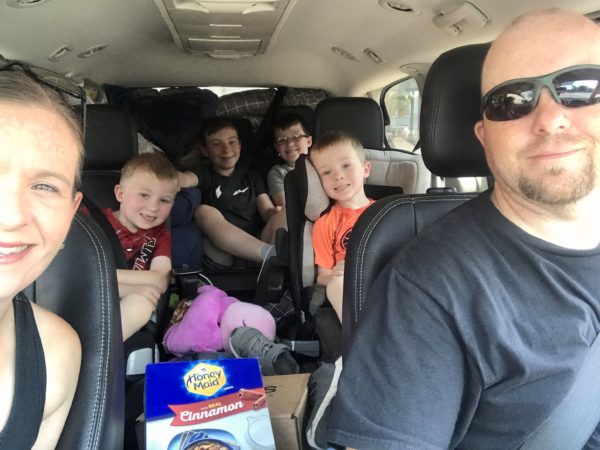 A great sense of relief washes over us as we safely turn into the our farm driveway in Iowa. The Hamer family loads up in the minivan for the last leg of their journey home from Minnesota, noting how green the landscape is in the absence of the golden wheat fields we’ve become so accustomed to.