All Aboard Harvest | Brian: Take me out to the ball park
22991
post-template-default,single,single-post,postid-22991,single-format-standard,qode-quick-links-1.0,ajax_fade,page_not_loaded,,qode-title-hidden,qode-theme-ver-11.2,qode-theme-bridge,wpb-js-composer js-comp-ver-5.4.7,vc_responsive 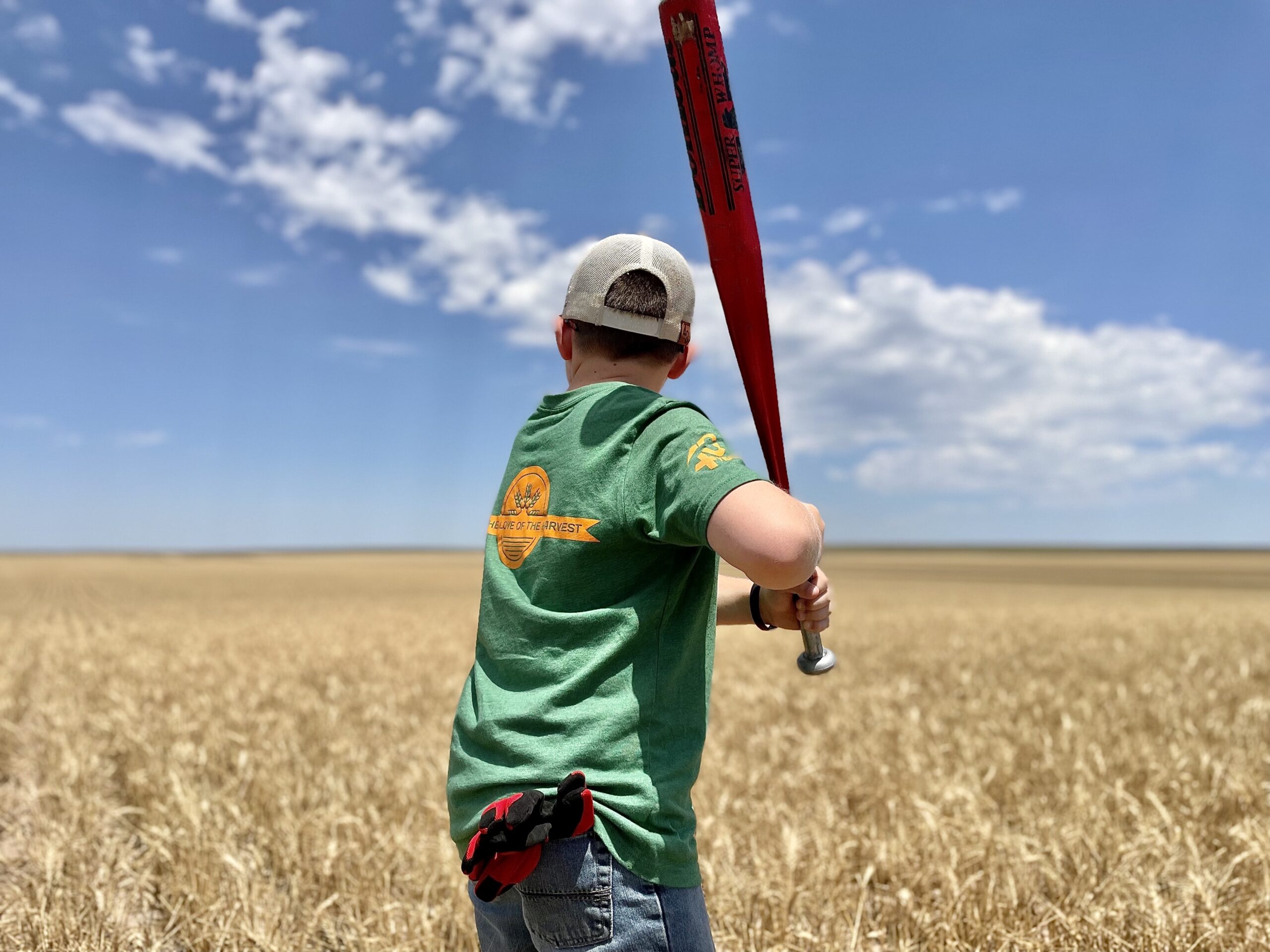 18 Jul Brian: Take me out to the ball park

Big Springs, Nebraska—It’s a pretty long pull from southwest Kansas up to Nebraska. With nearly 400 miles to cover, the crew has to be on the ball if we want to make it in one day. Last night we worked late loading machines in the dark, and everyone is exhausted from the heat. We finally get to bed after midnight, but it seems like the alarm clock goes off just minutes after our heads hit the pillows. Reluctantly we roll out of bed extra early, roll up the water hoses along with the electrical cords and roll down the road.


It’s gonna be a warm one today, so we play “who’s vehicle thermometer says it’s the hottest” game. Glen may win with 106 degrees, but we all lose our enthusiasm for this weather. The semi trucks work hard as we drive into a headwind, and the temperature gauges run near the red zones a few times. Mid-afternoon the air conditioners finally get a reprieve from the heat. Pop-up showers begin to form, blotting out the intense sun and making the second half of the trip a little cooler.

Further down the road the caravan has to travel under a railroad overpass, and it always makes me nervous. It’s almost comical I have this fear, as if magically somehow the bridge gets lower or the road gets taller since the last time we passed under. It looks like the combines have only an inch to spare when you follow from behind. I have enough grey hair as it is, so I glance out the side window. Of course there’s plenty of clearance, but now I’m all tense. This trip is too long, and I’m getting fidgety and bored. Are we there yet?

Cue the excitement. B00m! Brenda comes on the radio and says mom’s trailer just blew a tire. Well, I wanted to get out and stretch my legs, but this isn’t what I had in mind. Thankfully no flailing rubber has damaged the trailer’s floor or metal siding. It’s on the driver’s side, and of course this always happens along a busy highway. Brenda and I tackle the tire change ourselves, but I sure wish the traffic whizzing by would slow down. It’s a dangerous place to be, so the sooner we get the new tire on the better. I squeeze a jack under the leaning trailer, and the battery powered impact wrench makes quick work of the lug nuts. We are back on the road in short order and pull into Big Springs that evening.

Eight weeks ago a severe hail storm moved through this area, and basically all our fields received some degree of damage. The injured plants were resilient enough to survive, but their growth is way behind schedule. If I had to ballpark it I’d say close to half of our acres have a mixture of ripe wheat ready to harvest and grass green wheat two weeks away. This is not a winning combination, and we will have to move north long before these fields are ready to harvest. We are thankful for customers who understand we can’t stay here indefinitely, but we are also frustrated to leave our work here unfinished.

So the hail has thrown us a curve ball, but so have the storm clouds that pop up almost every night producing showers. We manage to sneak in one afternoon of cutting before we experience another rain delay. Eventually we get the chance to try a second time, but only an hour after starting we strike out again with 1.6 inches of rain. It’s going to take more than a few hours every couple of days to make much progress. The drought and hail have played hard ball with the crops here, and there is extreme variability. While the first field surprises everyone with 42 bushels per acre the next manages to yield only 12.

We’ve touched base with our next job, and the wheat is coming on quickly. But our slow progress is not leaving many extra days to finish here and get moved up to South Dakota. It looks like we are going to have to make a squeeze play, intentionally sacrificing acres here in hopes of scoring big in South Dakota. We are hearing the wheat is looking really good there, and we hope to finally hit a home run with big yields. We just need the weather to stop throwing fastballs and let us cross home plate here in Nebraska and finish.

As we celebrate this 4th of July season, let’s not forget what built this great nation. Let’s celebrate our freedom in this country and those that work in the fields to feed it. There may not be anything more American than baseball, hot dogs and apple pie, but harvesting these amber waves of grain seems pretty patriotic to me. Our baseball fields are the wheat fields of America, and the crew won’t stop playing until the harvest season is over. It’s the bottom of the ninth.  The bases are loaded. Let’s swing for the fences. 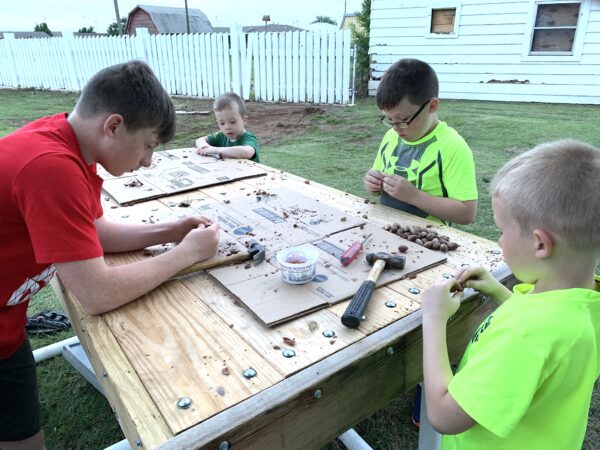 In Oklahoma the boys spent hours collecting and cracking open pecans from the shade tree we parked under.  There hard work was rewarded with a pecan (plus apple and cherry) pie to celebrate 4th of July. 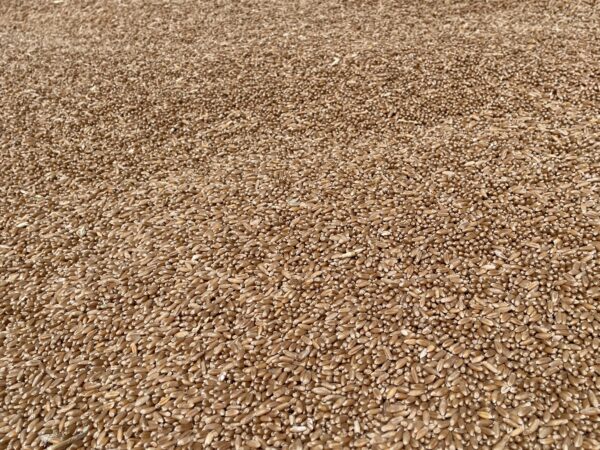 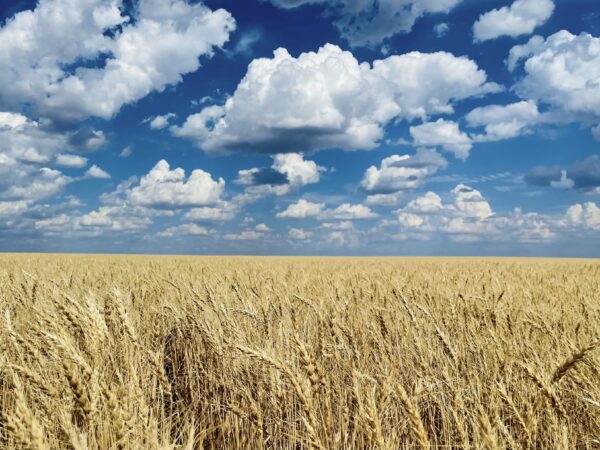 The wheat sample here was extra clean, and blue skies turned grey with rain too many times for our liking. 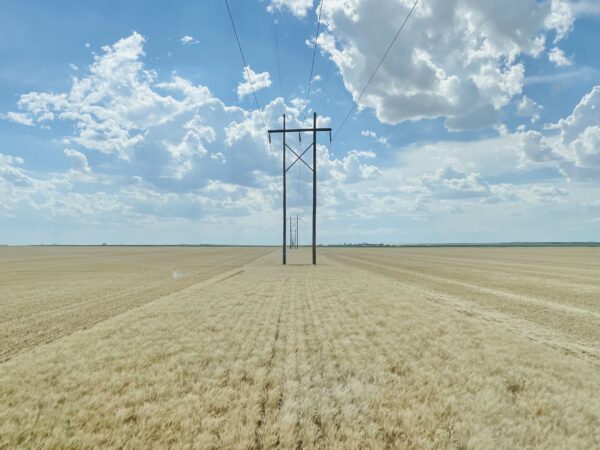 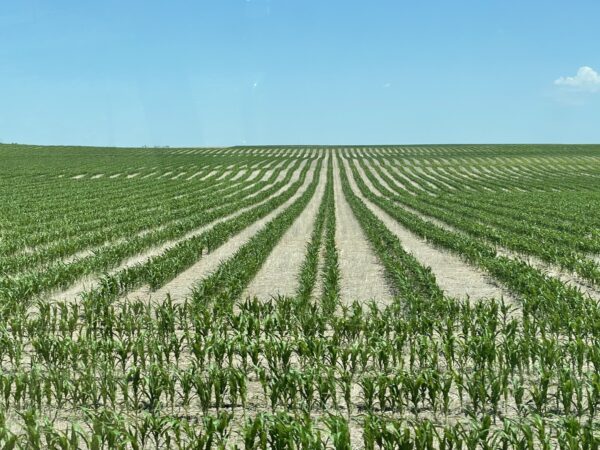 Nothing like power lines to cause a little extra work to harvest around.. Some corn grown in this area leave unplanted rows spaced between plants.  You probably have never seed a field like this, but theory is extra sunlight to the corn increases yield. 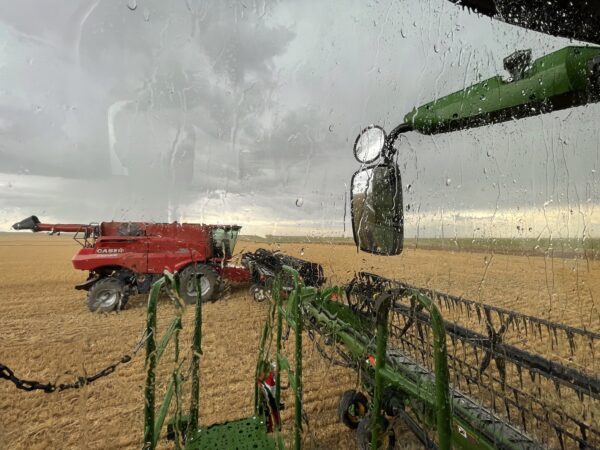 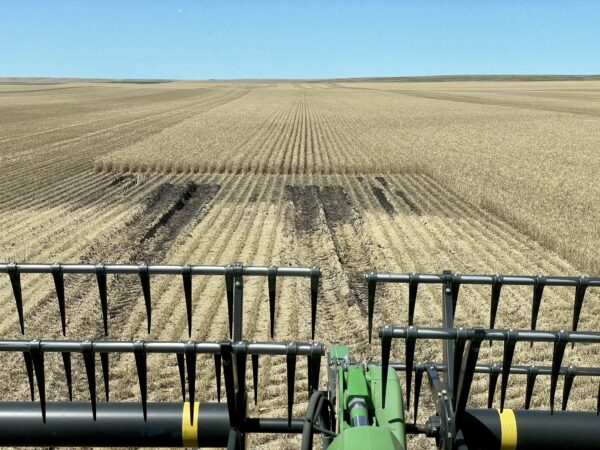 With so few acres left to go, 1.6″ of rain was not what we needed to get go South Dakota quickly.  A quick attempt to sample the moisture revealed the muddy ground would make us wait a few more days. 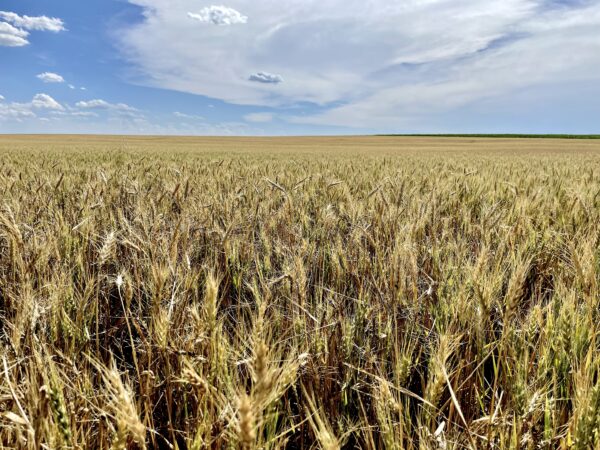 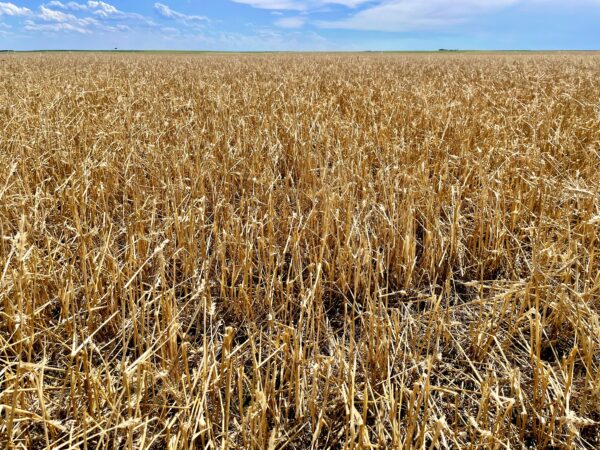 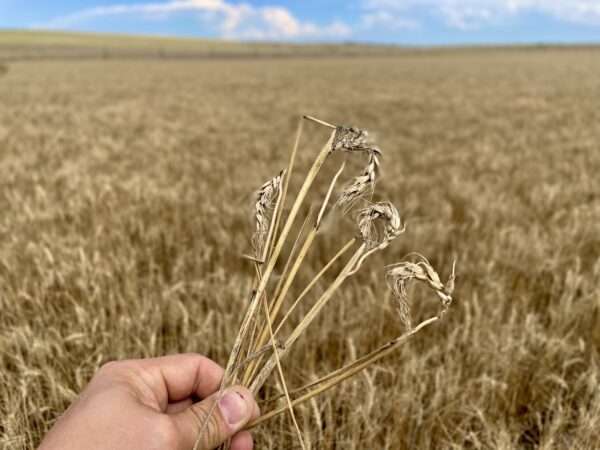 Hail damage is a losing proposition for farmers and harvesters.  Green “sucker heads” will delay harvesting many fields for weeks still, and the hail caused misshapen heads that contained very few kernels. 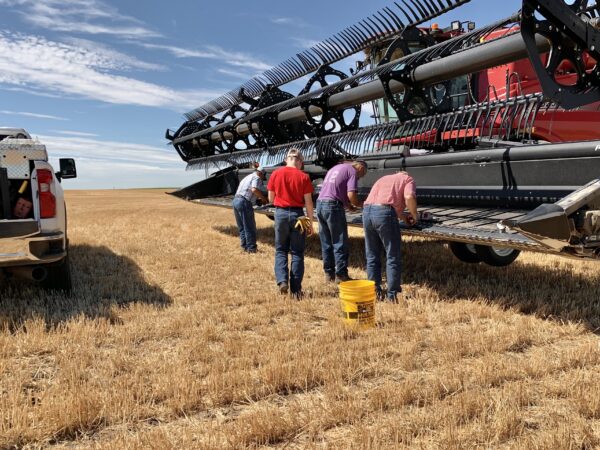 The dirt that comes with cutting so close to the ground acts like sandpaper to sickle sections, so we replace all 40 feet with sharp, new teeth.  The crew circles up at after fueling for lunch on the road. 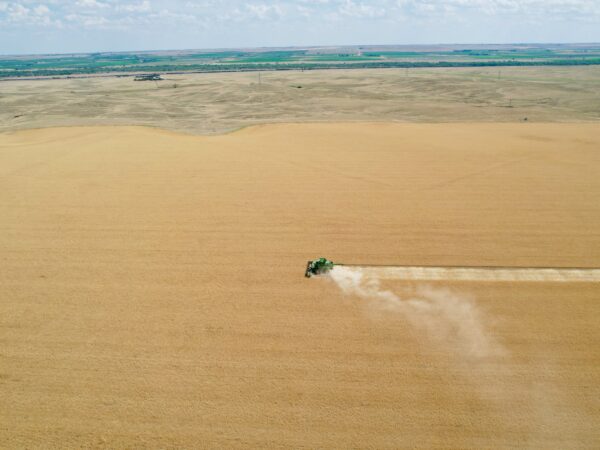 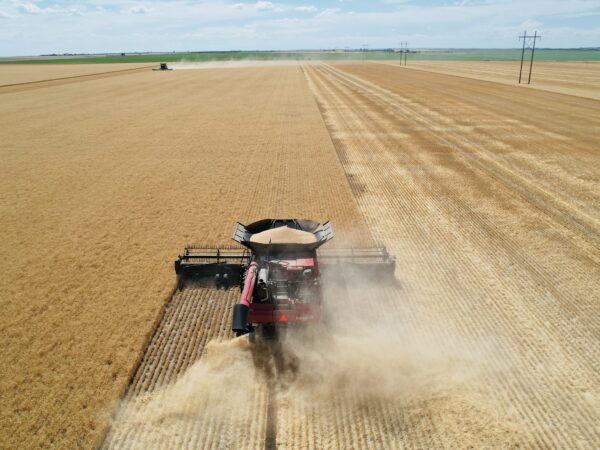 This area of Nebraska has plenty of farm fields, but large grasslands for grazing  cattle pepper the landscape.  Notice the lack of green color in the grass here, evidence of the extreme lack of moisture this year. 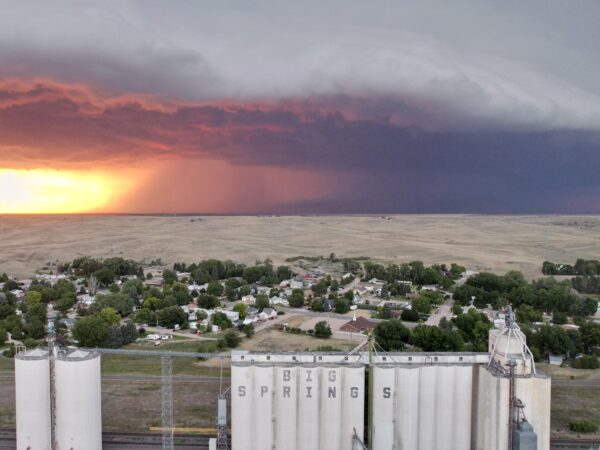 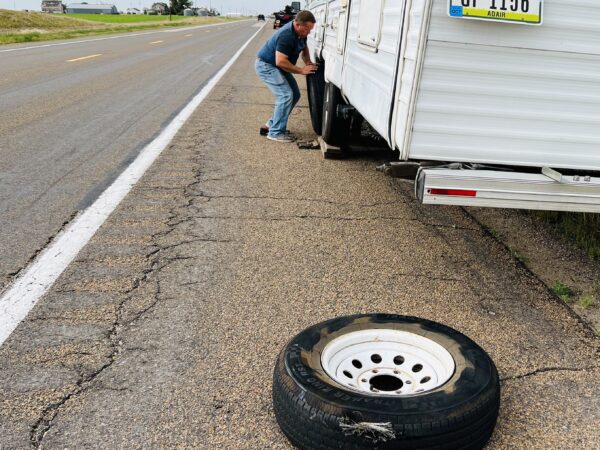 The storms that rolled threw this area were pretty ominous, and some fields received another unwanted round of hail.  Brian and Brenda change the trailer house tire with NASCAR-speed along side the busy highway. 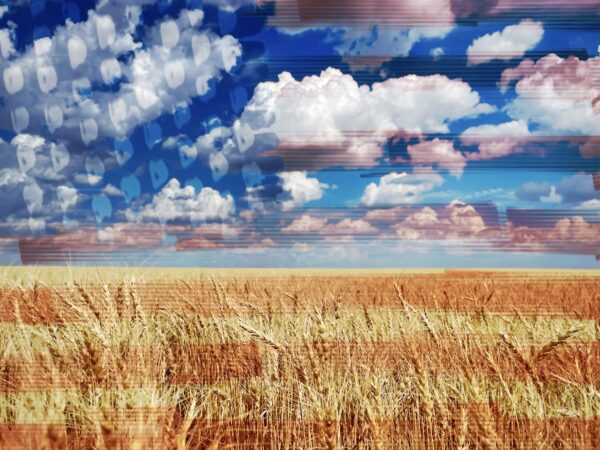 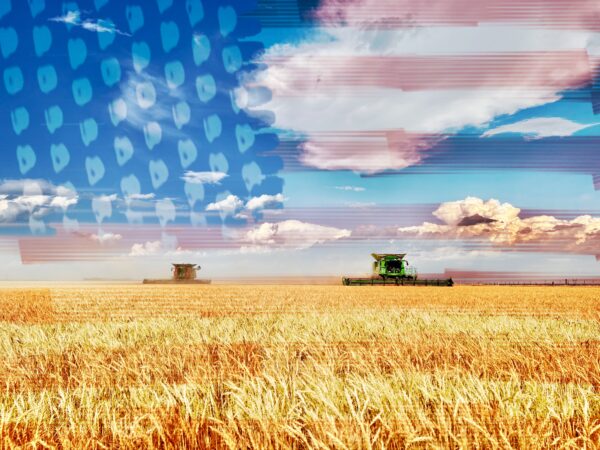 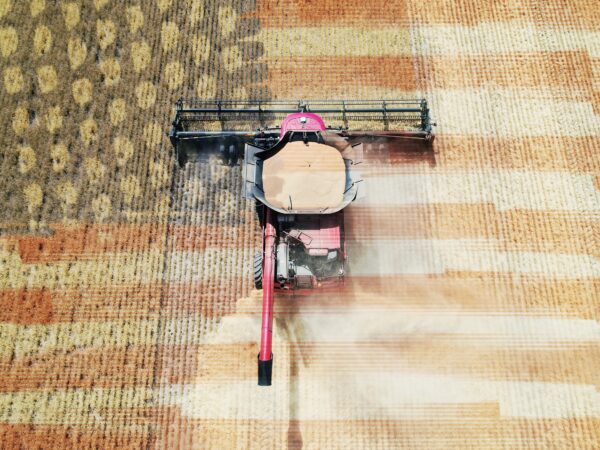 Amber waves in the Heartland’s plains.  Happy 4th of July from the crew as we celebrate America’s red white and blue.


Brian Jones can be reached at brian@allaboardharvest.com. 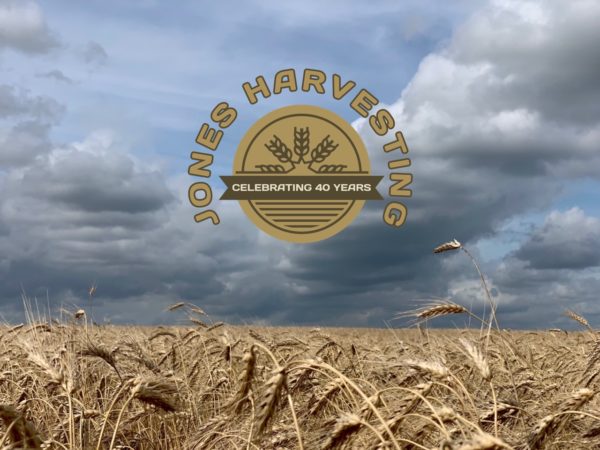