All Aboard Harvest | Christy: Montana yields are hit and miss
23231
post-template-default,single,single-post,postid-23231,single-format-standard,qode-quick-links-1.0,ajax_fade,page_not_loaded,,qode-title-hidden,qode-theme-ver-11.2,qode-theme-bridge,wpb-js-composer js-comp-ver-5.4.7,vc_responsive 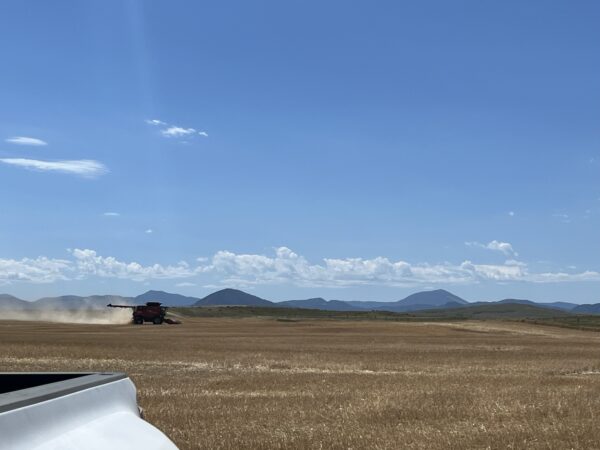 Look at that scenery. Highwood Mountain range is in the background. Southeast of Fort Benton, Montana where wind rows were averaging close to 80 bushels per acre.

Fort Benton, Montana—It has taken a few days for me to get caught up after our long move to Montana, but I’m so glad we’re here. We started combining right away starting just east of Fort Benton picking up wind rows. The first fields averaged about 60 bushels an acre and moving farther to the southeast they averaged closer to 80 bushels per acre. It was a great start to see some higher yields, but we couldn’t get too excited yet. 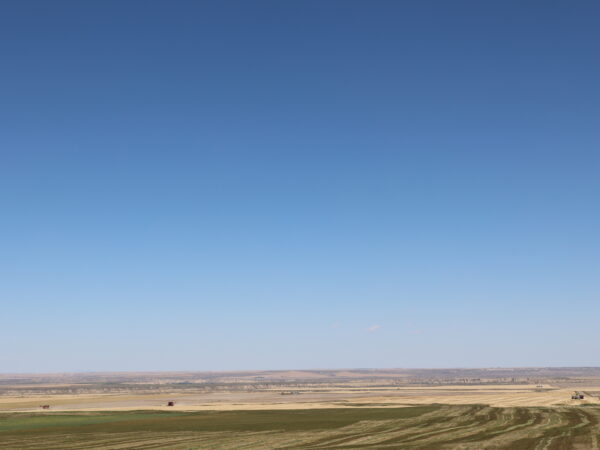 After leaving the field, I came up on the hill and could see our crew from up above. They look like only little specs in the vast expanse around us.

Soon after three combines started pickup head work, winter wheat was ready to go by Carter, Montana. From Fort Benton, Carter is about 15 miles to the west and slightly south on the other side of the Missouri River. We started with three combines running draper heads there. Crops for this farmer are not as good as hoped. Because his wheat is an early maturing variety, the rain that finally came late in the season was not a big help for yields. This wheat is averaging around 30 to 40 bushels per acre. He did have another variety that later this week we found was averaging between 50 and 60 bushels per acre. It’s disappointing, but good that there is still something to combine and is faring much greater than most of what we’ve seen this year. The farmer told me the rains that finally came a few weeks ago where so spotty. You can see a difference even in crops just over the highway.

Combining by Carter, Montana, where wheat in the field yielded around 30 to 40 bushels per acre.

Gary’s crew started three combines on field peas in between Fort Benton and Highwood. They averaged 20 to 35 bushels per acre and were about average. After completing the field peas that were ready, Gary moved over to wheat by Waltham, which is closer to Great Falls, Montana. Once again, he got into the best wheat we’ve seen so far averaging around 80 bushels per acre. As I brought supper out the other night, I could tell it must be good by how slowly the combines were moving. 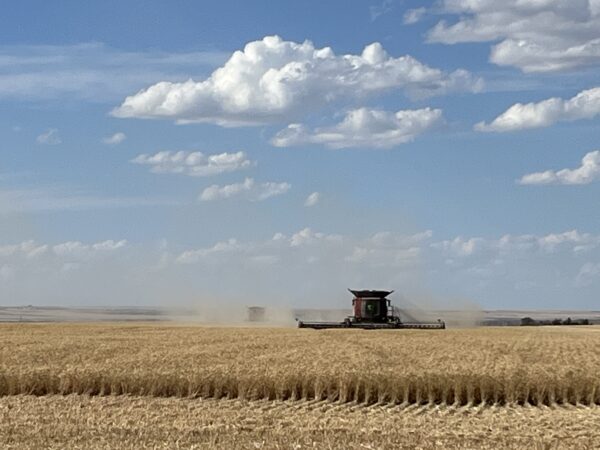 When Paul’s group finished up the windrows that were ready, he moved two combines to join the Carter crew and moved just his combine over to work on a field of camelina. Camelina is a crop that’s similar to flax. Before Paul could finish the field, a storm cloud came up from Great Falls and rained him out. It never seems to do that out here, but it was good to get a little rain. He said from what he could tell so far, the camelina wasn’t averaging very well. We’ll have to see when he finishes the field. 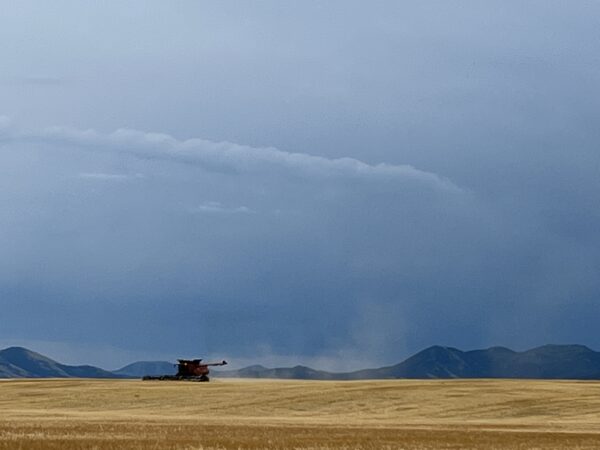 Paul combining camelina by Highwood, Montana, before the rain stopped him.

Overall, we’re really grateful to have all our machines busy out here. We’ve seen some great wheat, and some that didn’t fare as well with the dry conditions that have plagued just about everywhere we have been this season. There’s still a lot wheat yet to cut, but we’re moving through acres really quickly and I’m thinking we might just have a little break between the crops that are ready. Time will tell over the coming weeks. 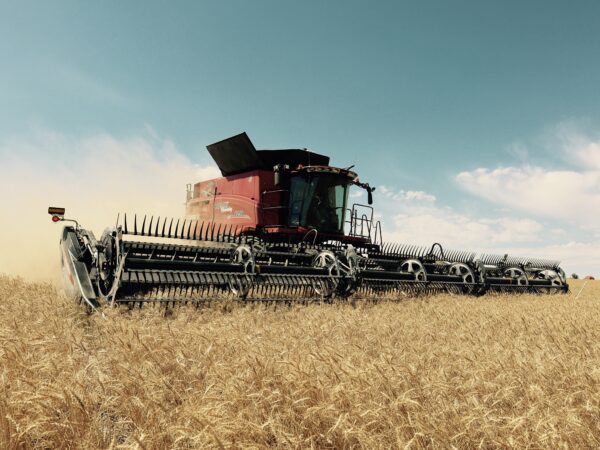