All Aboard Harvest | Kimberly: Resting up for next season
24411
post-template-default,single,single-post,postid-24411,single-format-standard,qode-quick-links-1.0,ajax_fade,page_not_loaded,,qode-title-hidden,qode-theme-ver-11.2,qode-theme-bridge,wpb-js-composer js-comp-ver-5.4.7,vc_responsive

20 Dec Kimberly: Resting up for next season

I hope everyone had a great Thanksgiving! We all got together at Roger and Renee’s for the day and then Mychal, the kids and myself headed to Duluth, Minnesota, for a mini vacation.
All of our employees have headed home for the holiday season and plan to be back at it right after the first. We have started our hiring process for the upcoming season and are hoping to get a few employees out a couple months before we head south.
Our fall run wrapped up fairly early this year, which had allowed us to get all of the equipment parked before the snow. Around the first of November we had a big snowstorm that left us with 13 inches of snow and we are currently going through another storm with freezing rain and then topping it off with roughly 15 inches of snow. 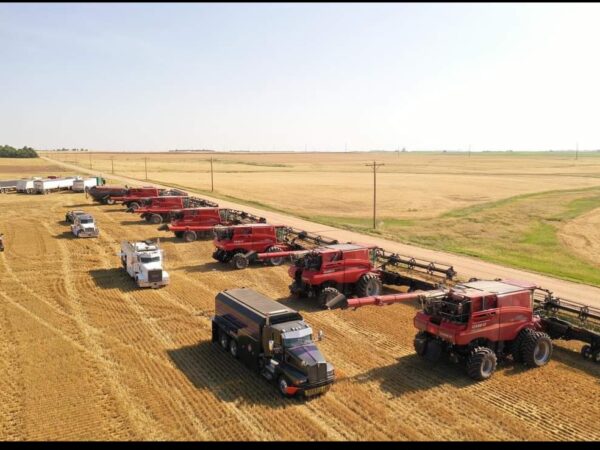 For our 2021 season we were in a severe drought which caused our average to be lower than normal. Our spring started off with a lot of moisture making it rather difficult to get the crop in but as the summer went on, we became dry. This caused our average bushels to be decent but we sure wished we had some moisture going into the fall harvest to help bring the yields up. We were a few thousand acres down this season due to a lot of the farmers around North Dakota having a lot of PP acres because of all the moisture this spring.
It never fails, when we are out on the road we bring the rain—most of the time. Our equipment salesman from Pratt, Kansas, called us one day to hurry up and send a truck down to pick up the skid steer. We asked if it was in the way, and he laughed and said, “No, we just need rain and last time you were here it rained for three days!”
It’s been another fun season and meeting the new employees, but now it’s time to relax and spend time with the family until the holidays are over and then we will start going over equipment. Although I am not sure how much relaxation I’ll be getting with all the activities the kids are involved in but I sure do enjoy watching them grow and become part of something. Current Bentley and Payzlee are in wrestling and Mychal helps coach, so weekends will consist of wrestling meets and traveling. Payzlee also is in Girl Scouts and I am going to guess she will be doing the cheer camp and mini basketball because she has to do it all.
We have a two-day snow cancellation so the kids are doing virtual learning so we don’t have to make these days up and they think they need to be out snowmobiling instead. We hope everyone has a great holiday season. 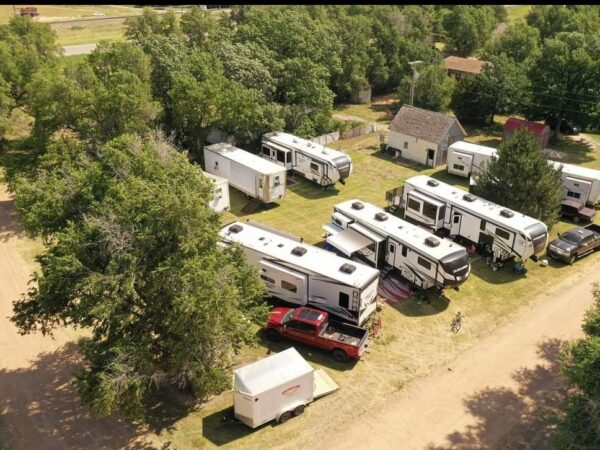 Campers taking over the whole block in Cullison, Kansas.