All Aboard Harvest | Z Crew: Into a Routine
8331
post-template-default,single,single-post,postid-8331,single-format-standard,qode-quick-links-1.0,ajax_fade,page_not_loaded,,qode-title-hidden,qode-theme-ver-11.2,qode-theme-bridge,wpb-js-composer js-comp-ver-5.4.7,vc_responsive

Jordan, MT/Louisville, NE: It’s amazing how time can get away from you…how one day seems to just melt into the next. I didn’t realize how long it’d been since I wrote until Callie started school last Thursday.

Since Callie and I left Mom and Dad back in Montana we’ve been busy catching up with our “normal” lives. We came home right in the middle of the county fair, school shopped for an afternoon and then it seemed like a week and a half just kind of got away from us. Thursday morning Callie woke up and headed out the door for her first day of Junior Year. The next day I finished up my last homework assignment for my online summer classes. We’ve been busy meeting up with friends and playing in the Platte River but now it’s back to routines and classes. Along with getting back into the school groove, I’ve been busy job hunting, spending time with Jamie and Eli, and organizing my life after being gone for a month.

Back in Montana Mom and Dad have been staying busy in the field. The following paragraphs are from a note from Mom:

“Our daily routine has been some of the longest days we’ve put in this summer! …We are up about 7:00 (well, Jim is. I lay there until 7:15) to begin our day. Jim gets dressed and heads to the Cenex for fuel and then to Ryan’s for any grocery needs and our daily quota of ice. While he’s doing that, I’m making lunches and hoping to get caught up on the world news…

We try to head out the door no later than 8:30. Once we get to the field, Jim greases while I tend to the fuel and windows. I distribute the lunch boxes and water jugs to the appropriate vehicles. All the while watching where I step for fear of a snake lurking in some weird spot. So far this summer we have not seen one rattlesnake. I hope to keep it that way! 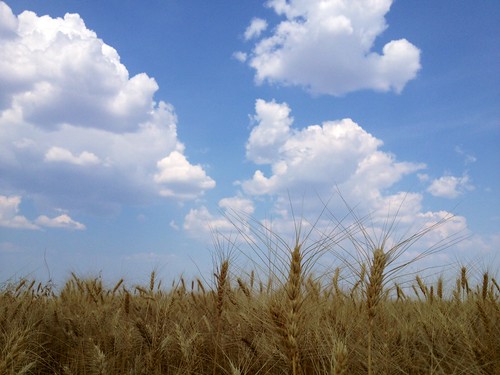 The combine is usually fired up and headed to the field between 9:30 and 10:00. And that’s where I sit all day until the sun starts to go down about 8:30ish. I try to get 120 acres under my belt. The other day I was able to get 135. Ok … ok, I’m sure there’s someone out there who will tell me they get way more than that accomplished in a day. To that I say – good job! For me, though, the ground is pretty rugged and has deep cuts where water has run and there are rocks. If I were to pick up a rock and run it through the combine, I may as well pack my bags and head for the nearest bus station! 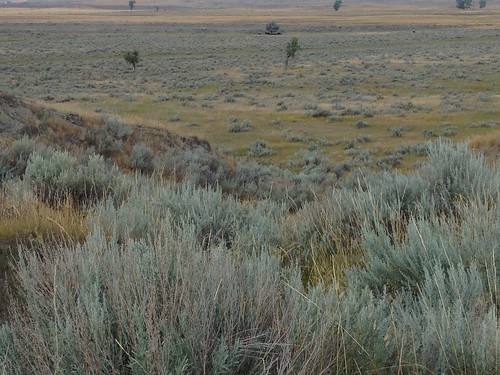 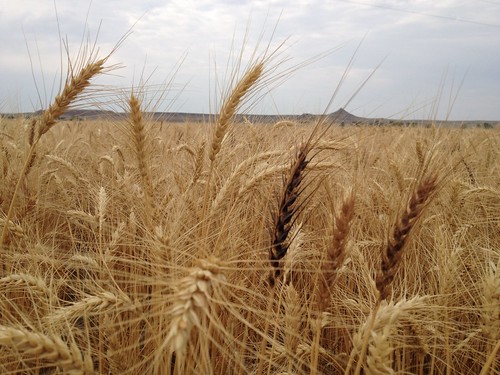 One field had multiple varieties planted in it. You can just see the difference in color. One almost looks black! 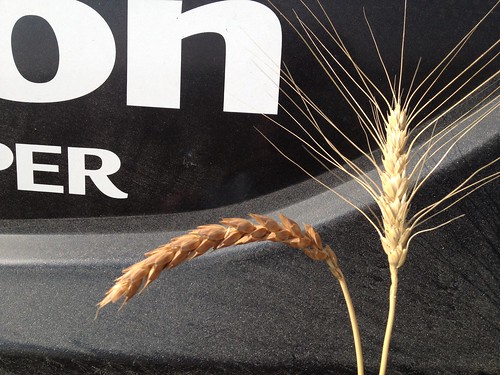 Another indicator of a different variety is if it’s beardless. Can you see the difference? 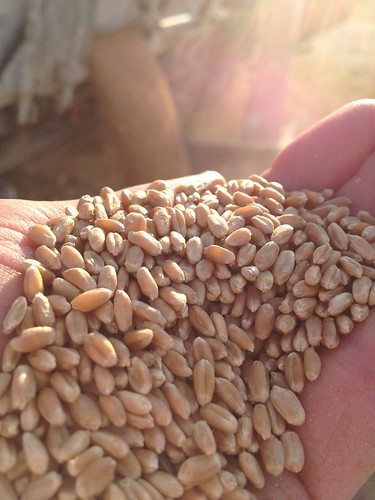 It amazes me to think about how important these little berries of wheat are in our world. 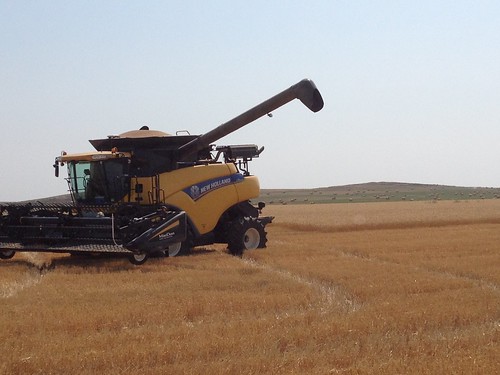 When the Beast comes to a standstill at the end of the day, I jump out of the cab and use my handy, dandy “harvester’s secret” and clean my windows. Jim is usually finishing unloading the truck into the grain bin. 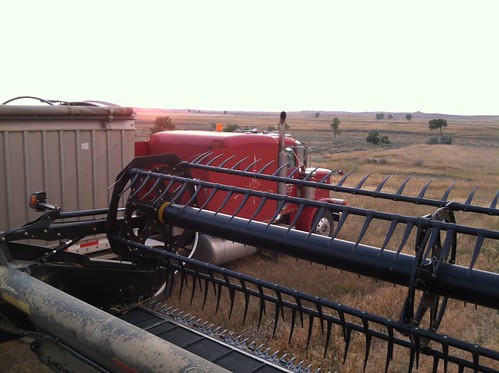 The view as the combine dumps grain into the Pete. 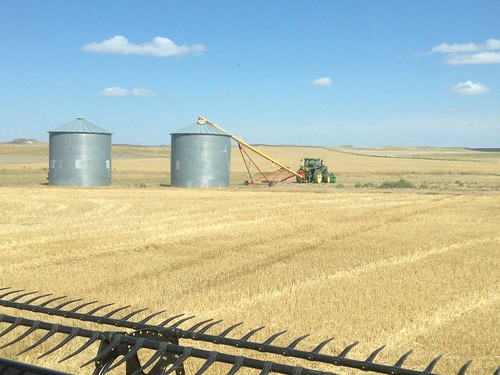 These are bins some of the wheat is hauled to. 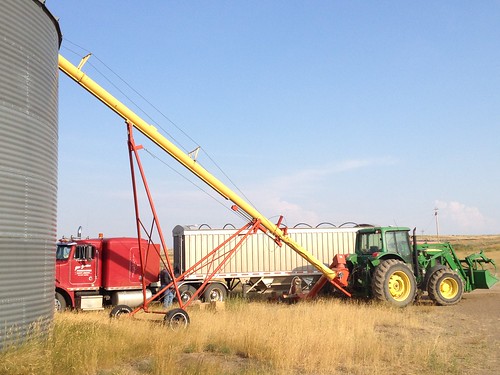 The grain is dumped into the auger and taken up into the bin.

Once he’s finished with that, he empties the fuel from the pickup’s fuel tank and blows the combine off with his leaf blower. When everything has been put to bed for the night, we head for the Cottage. By the time we get back, it’s usually 10:30 or later. This is when I really miss the girls. Since they aren’t around, we have to get by on whatever for a quick meal before we get to bed. Typical meal may be a bowl of cereal, crackers and cheese, maybe chips and salsa, a frozen pizza or nothing.

Jim’s first in the shower. The truck driver always gets the shower first. Always! While he’s doing that, I try to get caught up on the day’s emails and anything else that may need my attention. It’s usually midnight or after before I get my shower taken and crawl into bed. There are nights when that bed has NEVER felt so good!

…Ok – now I can relax and go to sleep. Just to do it all over again the next day.

The wheat in the second location has also been above the typical Jordan average. It’s so beautiful – the countryside and the wheat fields. I never tire of looking at a beautiful wheat field (or a sunset)! 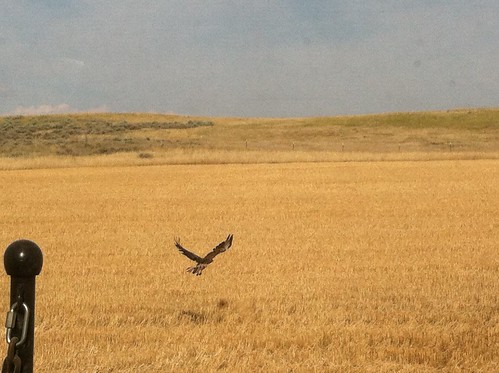 The hawks seem to really enjoy having the Beast in the field! When we come through the field, it means all the little critters that have been hiding under the canopy of the wheat now have to run for protection. That’s when Mr. Hawk sees the perfect opportunity to get a meal without having to really work for it. At one time, I had about ten hawks hovering over the Beast waiting, waiting, waiting and then the game begins. They dive for their next meal.”

I’m not sure how much wheat Mom and Dad have left to cut but I don’t think it’s very much. I’ll make sure to post again by the end of the week with one last update. How is it even possible that this summer has come to an end? 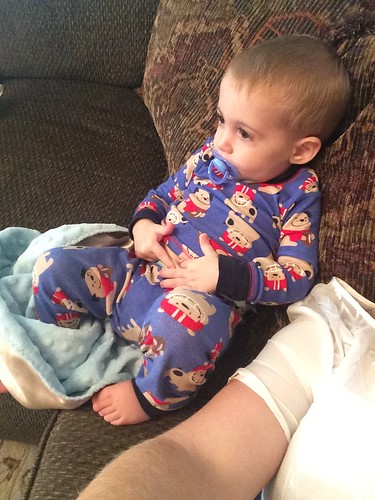 Eli has turned into quite the little man! 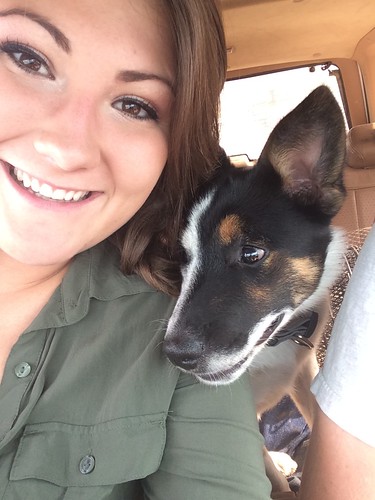 I was really excited to be reunited with my 4-month-old heeler pup, Stetson. 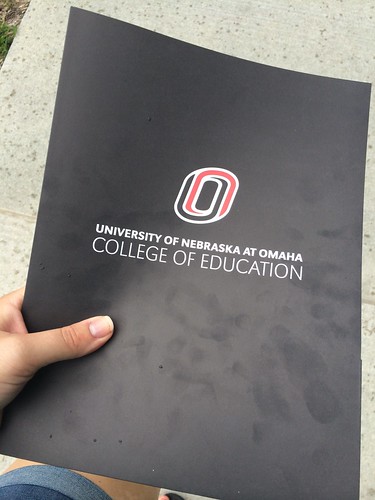 I took an afternoon and visited the University of Nebraska at Omaha. I can’t wait to start taking classes there next fall when I’m done at the community college! 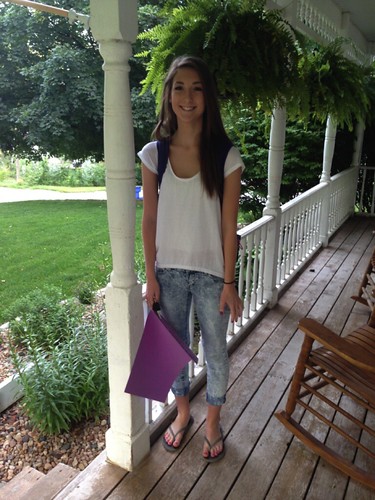 How is Callie a junior?! I’m pretty sure no one can really wrap their head around it. You’re almost done, Cal. Almost done.