All Aboard Harvest | Checkin’ off the southern states
9308
post-template-default,single,single-post,postid-9308,single-format-standard,qode-quick-links-1.0,ajax_fade,page_not_loaded,,qode-title-hidden,qode-theme-ver-11.2,qode-theme-bridge,wpb-js-composer js-comp-ver-5.4.7,vc_responsive

02 Jul Checkin’ off the southern states

As I mentioned in my previous post, I’m trying my darndest to bring you all up to speed on Roland Harvesting’s latest happenings. On June 17, Brandon and the crew moved to the next place on our agenda, Carmen, Oklahoma. Since rain had settled in near Duke, Oklahoma, Dad and Ben stayed behind with a combine and truck to finish up the job while the rest of the crew traveled north.

In the week prior to our arrival, the Carmen area received over 8 inches of rain. The interesting part of this statistic is that the annual precipitation for the area is usually only around 30 inches per year! Therefore, it was no shock to us when our first day in Carmen was spent taking samples and waiting on the wheat to dry down. Regardless, the time was not wasted. Harvest Support tracked us down and helped with computer and electronic updates that were needed for the last 10 days.

The next day, we were finally able to get in the fields and kick up some dust. The moisture remained low enough to continue cutting, but the saturated ground couldn’t always hold the equipment. The combines got well acquainted with that red mud in no time! The wheat yielded between 30 to 50 bushels per acre with test weights as low as 54 pounds due to the late rains. Along with the recent moisture, grass and weeds began overrunning many of the fields. In turn, the combines and operators had to work extra hard to ensure the machines wouldn’t become slugged.

On June 22, the harvest gods continued to test our patience. Around 10 a.m. Brandon noticed a fuel leak on his CR 8090. The leak was caused by the fuel lines rubbing together, and luckily the machine was still under warranty. After traveling to Harvest Support to get parts and put everything back together, the combine finally got fired back up around 4 p.m. The rest of the evening was spent maneuvering between the weeds and mud, making it an extremely trying day. Brandon decided to make one last round for the night before calling it quits and lo and behold, he ended up buried in a mud hole. It was one long, bad day. The combine was in such bad shape that the next morning they were just moments away from calling a dozer to pull it out. However, with one last “Hail Mary” attempt they were finally able to get it out with our farmer’s massive tractor.

Part of the convoy all loaded up and ready to head to Carmen, Oklahoma. 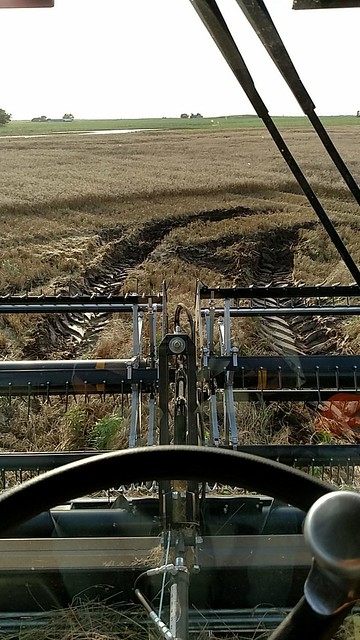 The first of many “almost got stuck” views. When you feel yourself start to sink you try to get out as soon as possible! 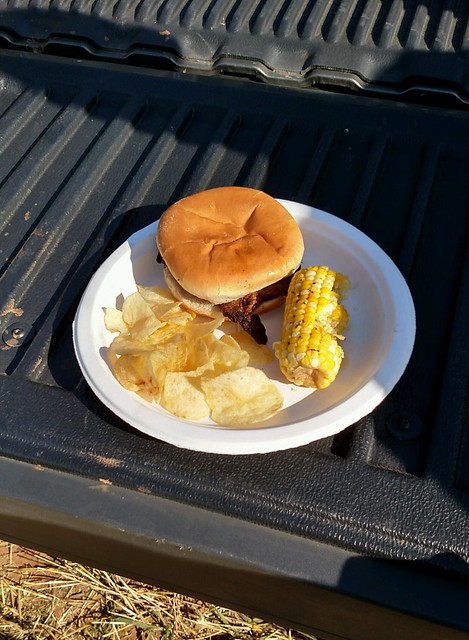 Miss Mary once again spoiled the crew with her delicious meals! 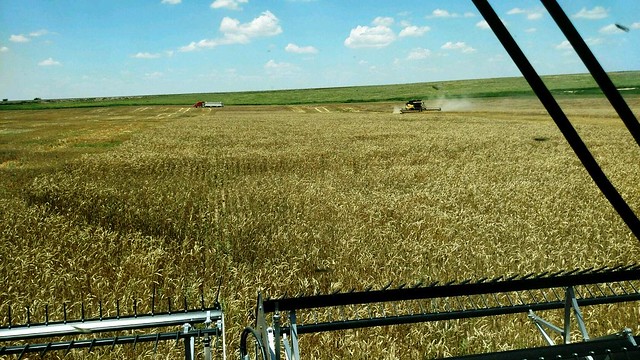 Kicking up dust as Brandon and Joel finish cut out a landing. 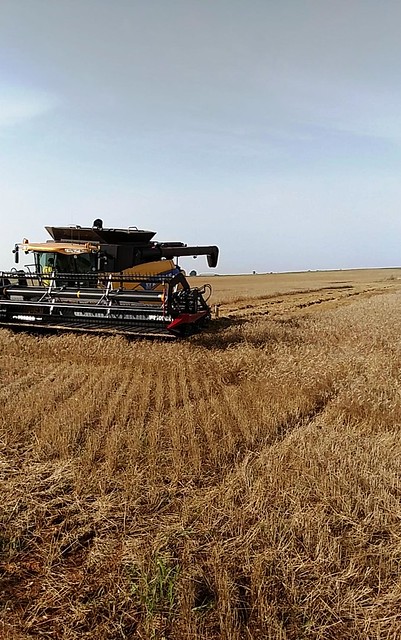 Not so lucky this time… 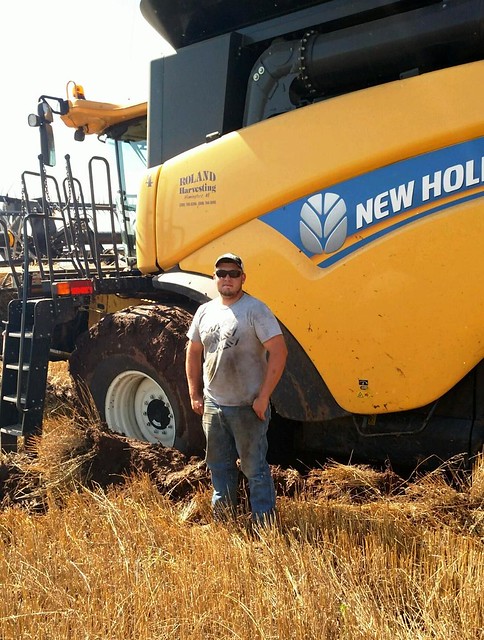 Joel stands by the first mud hole he encountered. 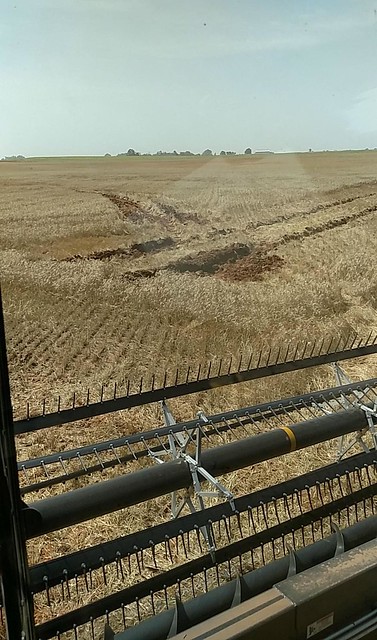 A little aftermath from playing in the mud.

Brandon knows that harvest sunsets are my absolute favorite. I’d say he captured this one beautifully! 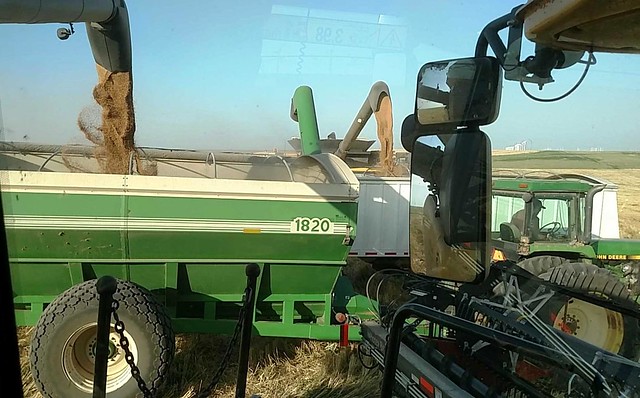 Sometimes it’s a group effort for everyone to get unloaded.

Despite the uphill battle we were able to check off Carmen, Oklahoma, from our list. On June 24, Brandon and the crew loaded up and moved near Amarillo, Texas. The journey was filled with tire troubles and unexpected road construction. Halfway through the trip the pickup was forced to stay behind after a blowout on the header trailer, so the oversize loads led the way. Suddenly, they passed a sign that read, “Road work: 1/2 mile ahead.” Of course, there were no pull-off options or places to turn around. The convoy had no choice but to slowly squeeze past the cement bunkers and guard rails, with not more than a couple inches to spare on each side. The crew had checked online before leaving and there were was nothing marked on the map. Even after this incident Brandon double checked online and sure enough, this road construction was not posted anywhere. After all the excitement the crew eventually made it to Amarillo safe and sound. The last few days Roland Harvesting has been going over some serious acreage. 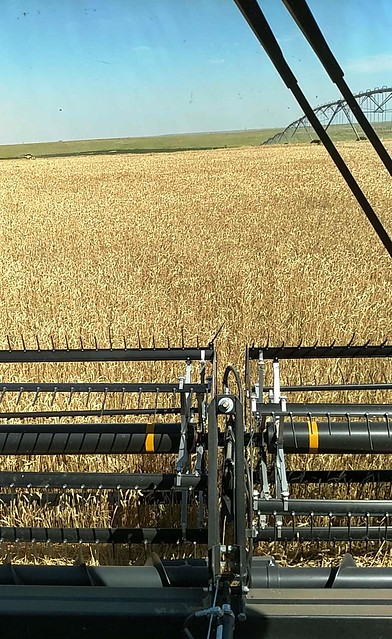 The crew was welcomed by these gorgeous, flat fields of irrigated wheat near Amarillo.

Meanwhile, this entire time Dad and Ben have been stuck around the Duke/Altus area. Due to several sporadic rain showers it has taken considerably longer to finish up than originally planned. The extra rain means they have also been fighting mud. Dad says the last couple weeks have felt like Groundhog Day. Since our new combine is still out of commission, Dad is continuing to use our old CR 8090 as a replacement. This ol’ yellow beast has been giving him fits lately. A few days ago the combine encountered a computer issue that left him stranded in the middle of a back road for almost seven hours. Despite the many struggles Dad finally broke his time warp on June 26. The next morning Dad and Ben moved their single combine show to Perryton, Texas.

Typically, we move in a northern direction as we follow the harvest across the Wheat Belt. However, these areas of Texas come off at a later time due to the higher elevation. It seems backward to move from Oklahoma back to Texas, but that’s the reality of harvest. 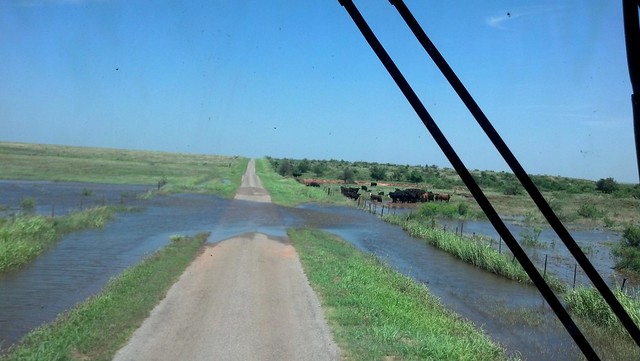 Here is one of the roads Dad had to cross around the Altus area. Seven days after the last rain, water was still running across the road. 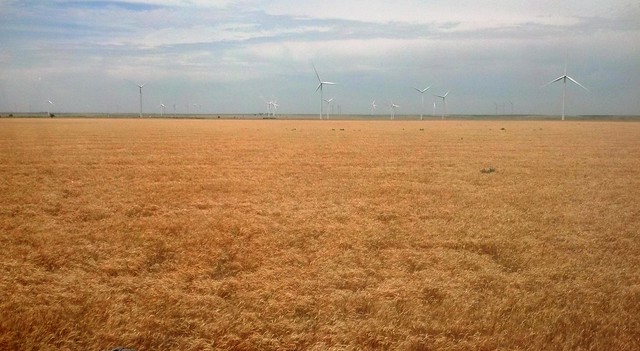 There were over 350 wind turbines adjacent to these fields around Perryton, Texas. 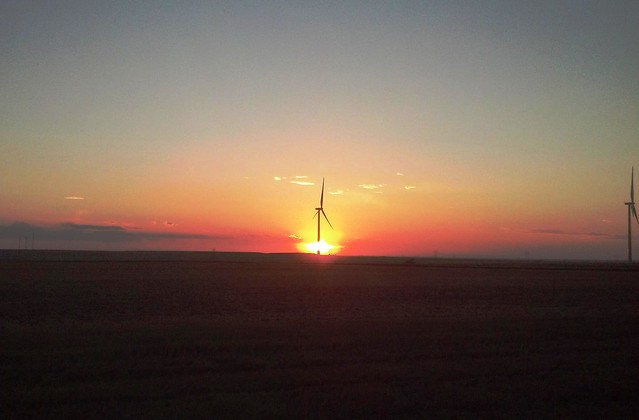