All Aboard Harvest | Only scratching the surface
9486
post-template-default,single,single-post,postid-9486,single-format-standard,qode-quick-links-1.0,ajax_fade,page_not_loaded,,qode-title-hidden,qode-theme-ver-11.2,qode-theme-bridge,wpb-js-composer js-comp-ver-5.4.7,vc_responsive

16 Jul Only scratching the surface

Limon, Colorado—There is nothing worse than being sick in the summer time. Somewhere over the last week I picked up a bad cold I’ve really been fighting. Because I’ve been sick, I’ve been taking advantage of lying in bed a little later than usual. Yesterday morning as I laid in my bunk and stared at the ceiling I overheard a phone conversation between Dad and a farmer in Montana we anticipate working for. Dad explained that we really hadn’t gotten started yet in Colorado and it’ll be hard to say how soon we can make it north. “Call me back in a week to 10 days and I’ll know a little more.”

We’ve been here in Limon for a little over a week and are just starting to scratch the surface of the harvest here. For the last three or four days the combines haven’t been started up until shortly after the lunch hour. A test round is taken and if it’s fit to cut, they’ve been cutting until about 6 p.m. and then shutting down due to the nightly showers we’ve be experiencing.

There are no lines at the elevators yet because harvest isn’t really underway. It’s still a little early. The wheat we’ve been able to harvest is a small percentage of the wheat we have here as a whole and it looks like we’re almost caught up. We’ll soon run into more green wheat. The wheat we’ve seen has been as low as 12-15 bushels per acre or as high as 50. Test weight is fair at 59 to 60. The numbers are really all over the board. And as expected, Dad said there’s a lot of frost damage.

Last night we had a pretty good shower south of town where the majority of our fields are located. Callie and I loaded up a couple side dishes and headed for the farmer’s home for dinner with the crew. I can’t say it enough how much I love stopping in Limon because of the families we get to spend time with. Even when they know I’m as sick as a dog I was given numerous hugs, fist bumps and get well soons. Linda (farmer’s wife) prepared some delicious French dip sandwiches and granddaughter Riley prepared a delicious pudding dessert. We are so spoiled here with good food!

If you haven’t yet seen it, make sure you check out the Combine Cam! It’s a surefire way to see if we’re in the field or waiting for wheat to dry. We’re hoping the rain holds off for a couple nights. If we get caught up today or tomorrow it at least looks as though we have a good weekend of drying weather for the green wheat that lies ahead. 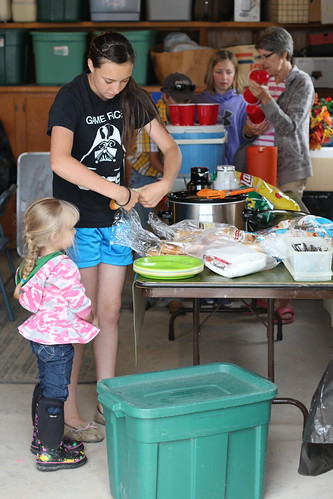 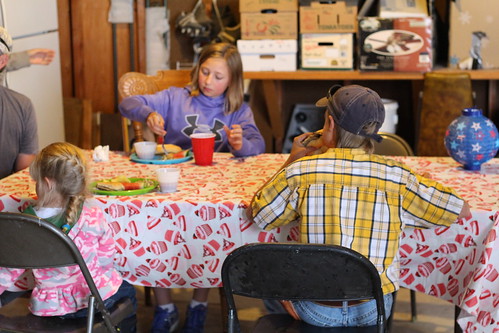 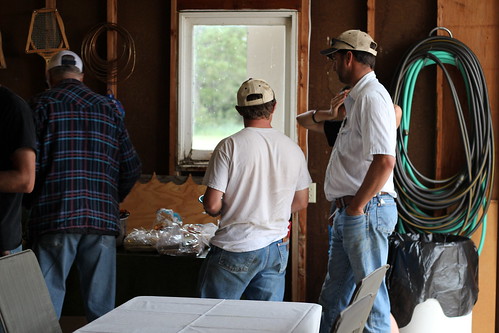 After the kiddos have their plates the guys wait in line for dinner. 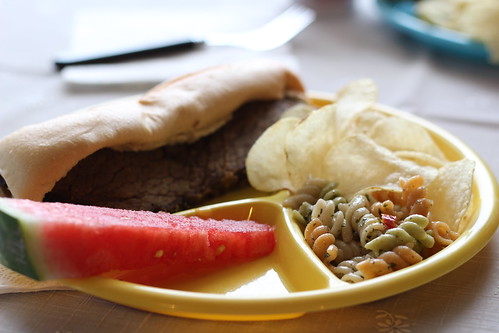 Can you say, “YUM”? No one in my family likes watermelon except for me. It’s a real treat being around this crew because they have a watermelon with just about every meal. 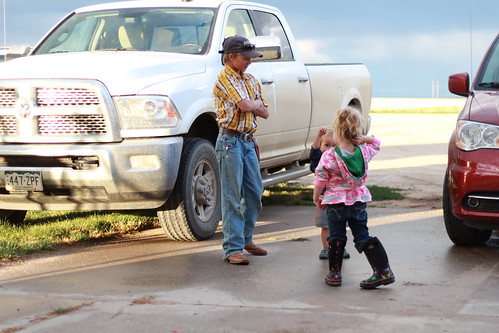 The dark clouds behind the pickup, to the east, were probably directly over our fields at that point! Oh well. We had a great dinner together at the farm.