Hemingford, Nebraska—Roland Harvesting made it back to our ol’ stompin’ grounds around July 15 and has been in the heat of home harvest since then. Scattered rain showers dampened our efforts for the first week and our days were spent bouncing between fields trying to find dry wheat. Brandon and part of the crew worked around the Chadron, Nebraska, area and also spent their fair share of dodging rain storms. They finally knocked out Chadron last week and moved everything home to help Mom and Dad. The rain eventually come to a halt and with all three combines working together we were able to cover a significant amount of acreage.

Like everyone around the Hemingford area we’ve been fighting mud almost every day. Due to this, we have had to cut the fields in patches to avoid the low spots. This is much more time consuming than cutting in our normal fashion. I was able to sneak away from Wyoming for a few days to help out with home harvest. Since I’ve been running tractor and grain cart, I’ve been put on mud duty by default. In one field alone I pulled out two pickups and a combine in less than 30 minutes. That tow rope and I became the best of buddies in no time!

Due to adverse conditions, many harvest crews have elected to skip this stop and head for drier ground in Montana, which is ready two to three weeks early. Because we’re in the business of customer service, we are currently trying to help neighbors whose crews pulled out on them. We’re still working on our own wheat, too, so we’ll be keeping plenty busy. 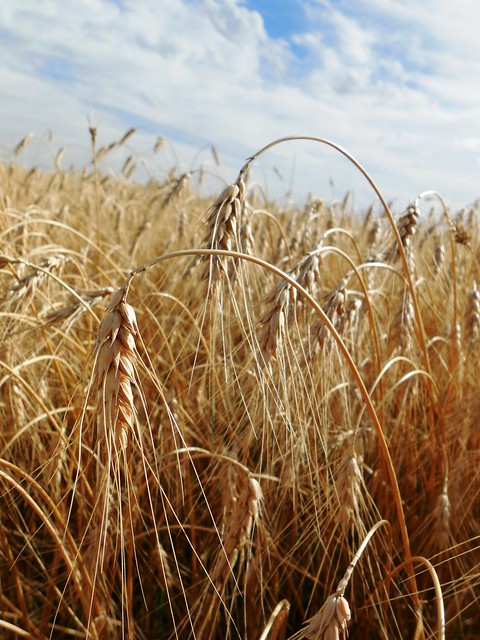 Much of the wheat was damaged this spring by late freezes. Scattered hail storms and excessive rain fall the past couple months have also impacted yields in the area. Most of the dryland wheat is making between 20 to 40 bushels per acre with test weights running in the high 50s. 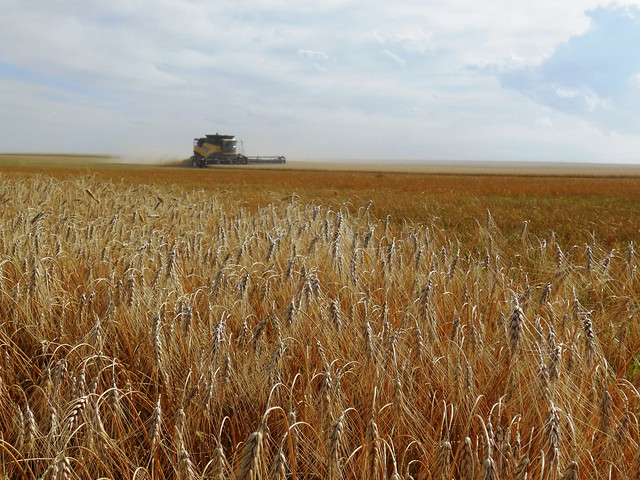 Nebraska cutting at its finest. The field is patched out in this manner to avoid mud holes. 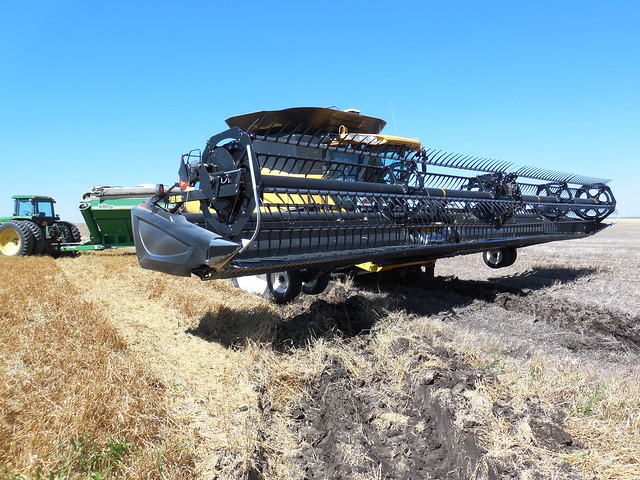 Well, we’re trying to stay out of the mud. Brandon was the first to get stuck, with many other incidents to follow by the rest of the crew. 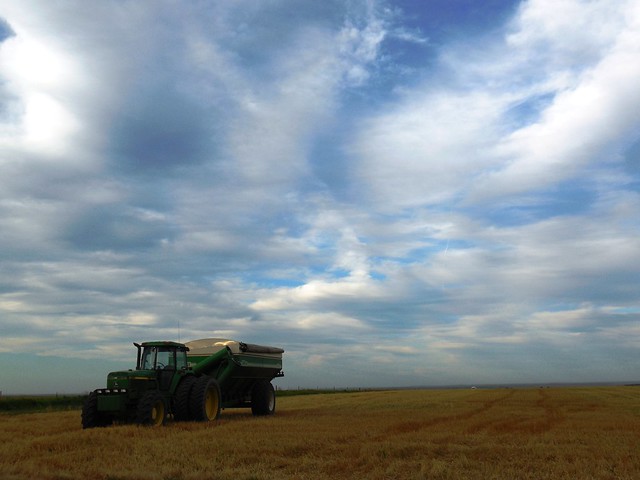 The tractor, grain cart, and I playing “sheep dog” on top of the hill to oversee the operation. Since I’ve been dubbed the “tow queen,” I’ve been running like crazy the last few days. 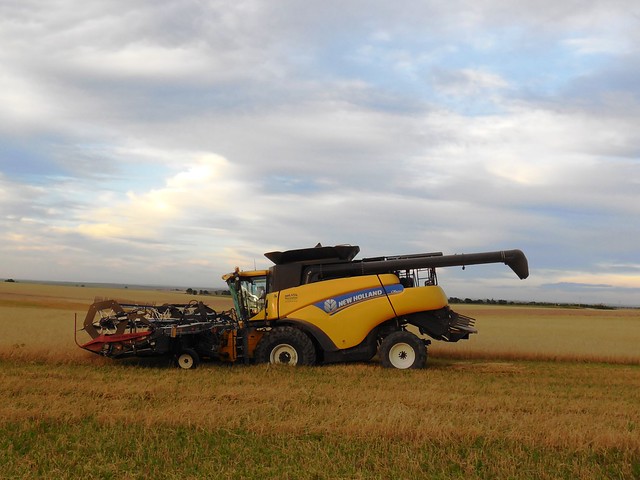 Then it was Joel’s turn. Harvest trick: As soon as you know you’re stuck, stop. Don’t try to get yourself out otherwise you’ll bury the combine even worse and you can cause serious damage to the machine. Joel did just that and waited patiently as we brought in a bigger tractor to get this beast out.

Since the fields are so soft, the combines have to keep their weight down to give them better floatation. A full grain tank adds 24,000 pounds of added weight to the already 45,000-pound combine. This means unloading frequently. Often times, we’ll stop near the ends of the fields to unload so the grain cart doesn’t chance getting buried near the mud holes. 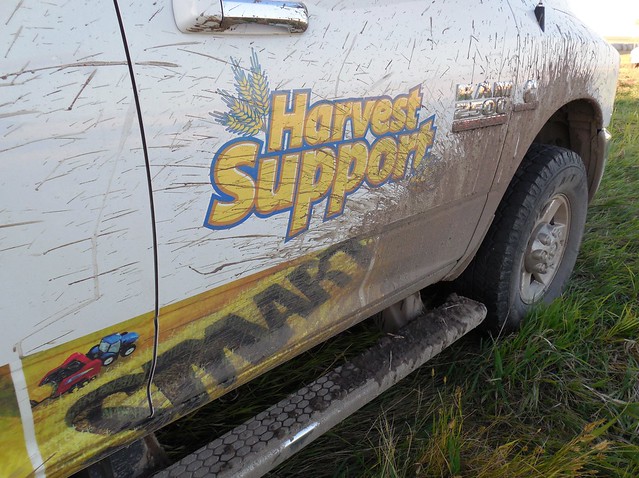 Even Harvest Support has been doing some off road mudding. 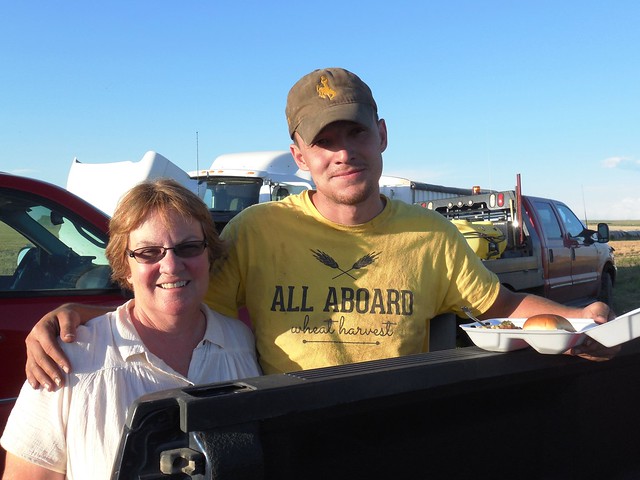 Mom and Brandon take a quick break from the harvest madness to eat lunch in the field. 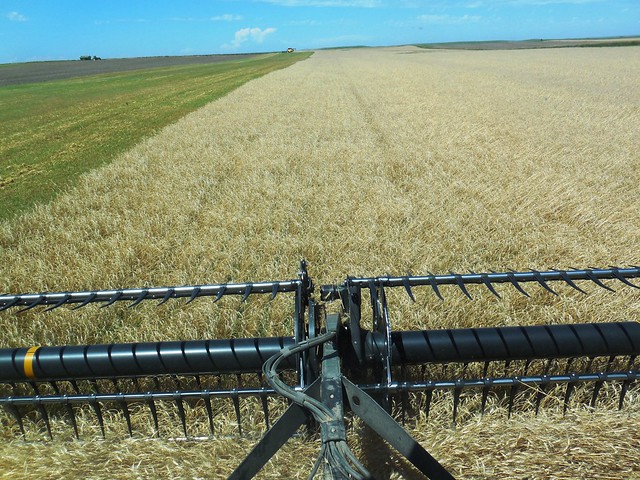 After a few days in the grain cart I was finally promoted to a combine operator again. Here’s a front row view of the CR in action. 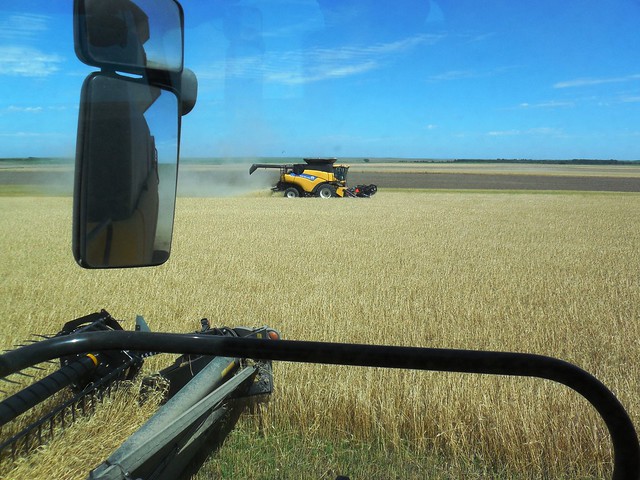 Harvest is a group effort. Brandon and I go round and round, both in the combines and in our sibling rivalries. 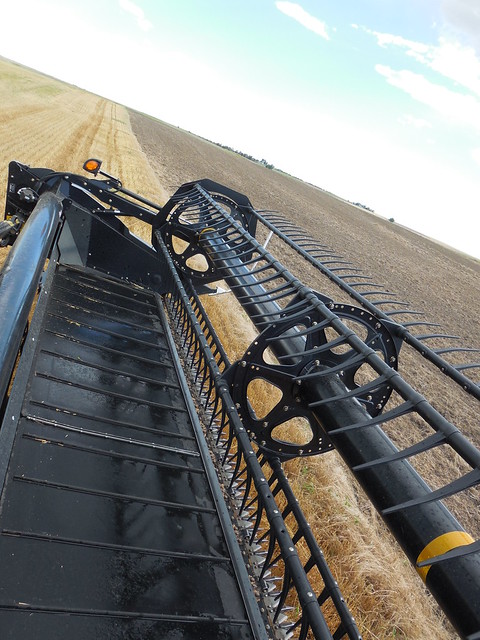 A brief thunderstorm rained on our parade the other day and eventually shut us down. Rule of thumb: When the middle of the reel is completely wet and dripping, it’s time to quit and wait for it to dry.

Ten minutes later the sun came out and the wind picked up. Since it was only a sprinkle, we were back in the field kicking up dust in no time. 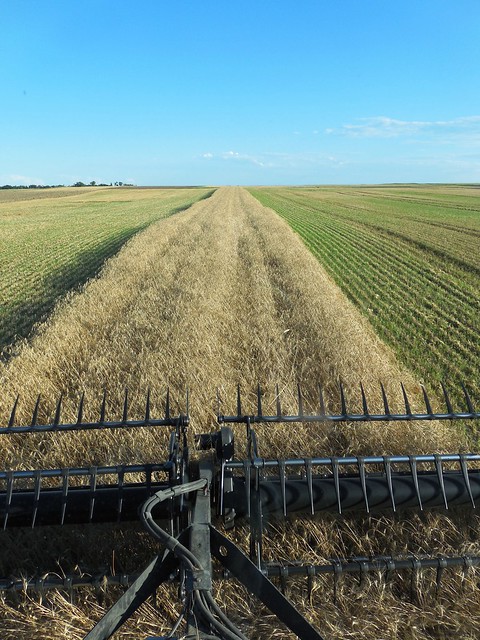 And I’m back in the combine picking up a back swath! As you can see, the stubble is full of grass and weeds. This is due to the extra moisture received this summer and because the chemicals have reached the limits of their effectiveness. 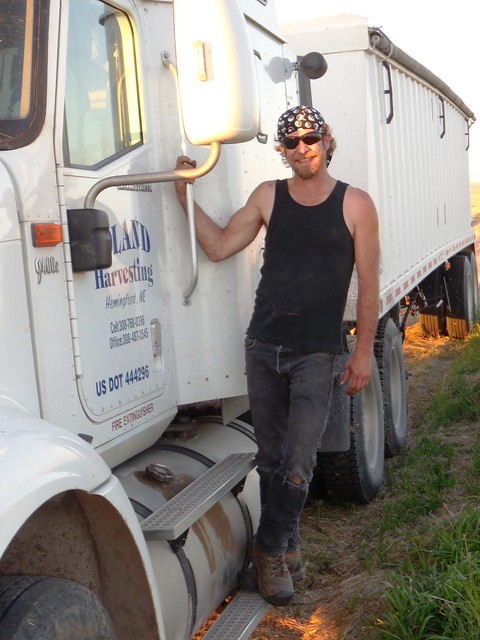 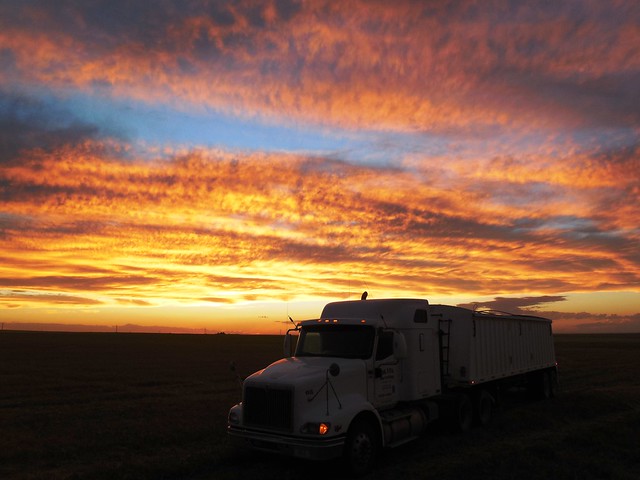 Nothing comes close to a harvest sunset like this one. 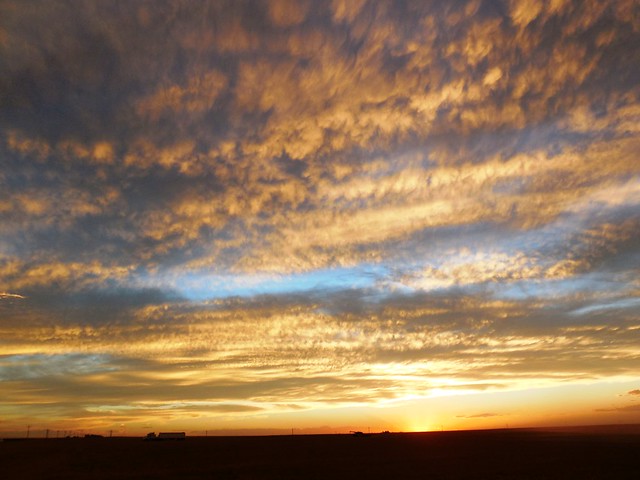 My favorite part of the day.