All Aboard Harvest | Playing the Game…”Race Against the Clouds”
13073
post-template-default,single,single-post,postid-13073,single-format-standard,qode-quick-links-1.0,ajax_fade,page_not_loaded,,qode-title-hidden,qode-theme-ver-11.2,qode-theme-bridge,wpb-js-composer js-comp-ver-5.4.7,vc_responsive

02 Jul Playing the Game…”Race Against the Clouds” 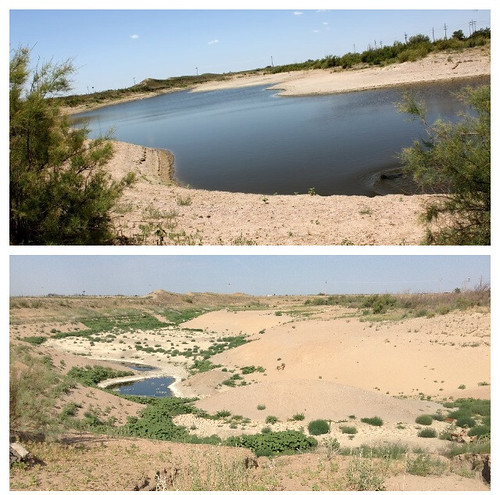 Callie created this comparison picture in 2013 of the sandpit that’s right out our backdoor. The top picture was taken in 2011 and the bottom one in 2013. 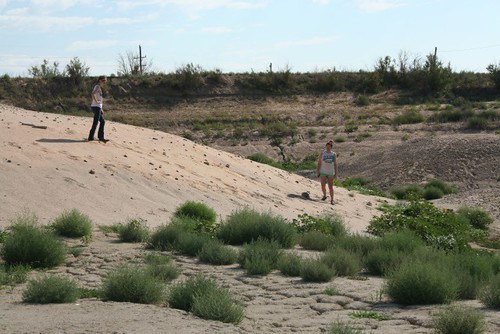 How often can you say you’ve walked on the bottom of a lake? 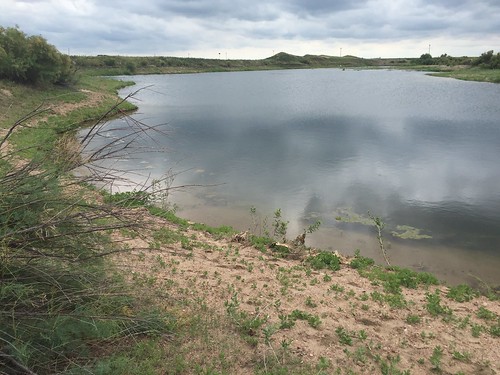 Same sandpit – taken just a couple of days ago. I’ve tried taking the pictures in the same locations so you can see the comparisons better. It’s more full now than it was in 2011.

This part of Kansas is not used to moisture. For the past several years western Kansas has suffered from drought – severe drought. A crop had decent yields if it was under a pivot. For the most part the dryland has suffered. Farmers have suffered. But, as we know, farmers are persistent, hopeful people. It’s always, “Maybe next year” country. Well, this is the year! When we landed in our farmer’s yard, his hired man, Gary, told us (as he was pointing to each field), “This field averaged 100 bushels per acre…this one 97…this one 98.” Jim and I looked at each other and could hardly believe it.

Until the Beast was in the field. That’s when we got to experience watching the yield monitor consistently showing 100 bushels per acre or more. It’s the best crop a lot of the area farmers have ever experienced. Everyone in the area is talking about the amazing yields. It’s been a long time coming! The test weight is around that 60-62 pound mark. Now…if only the prices were better for them. It’s always one thing or another. 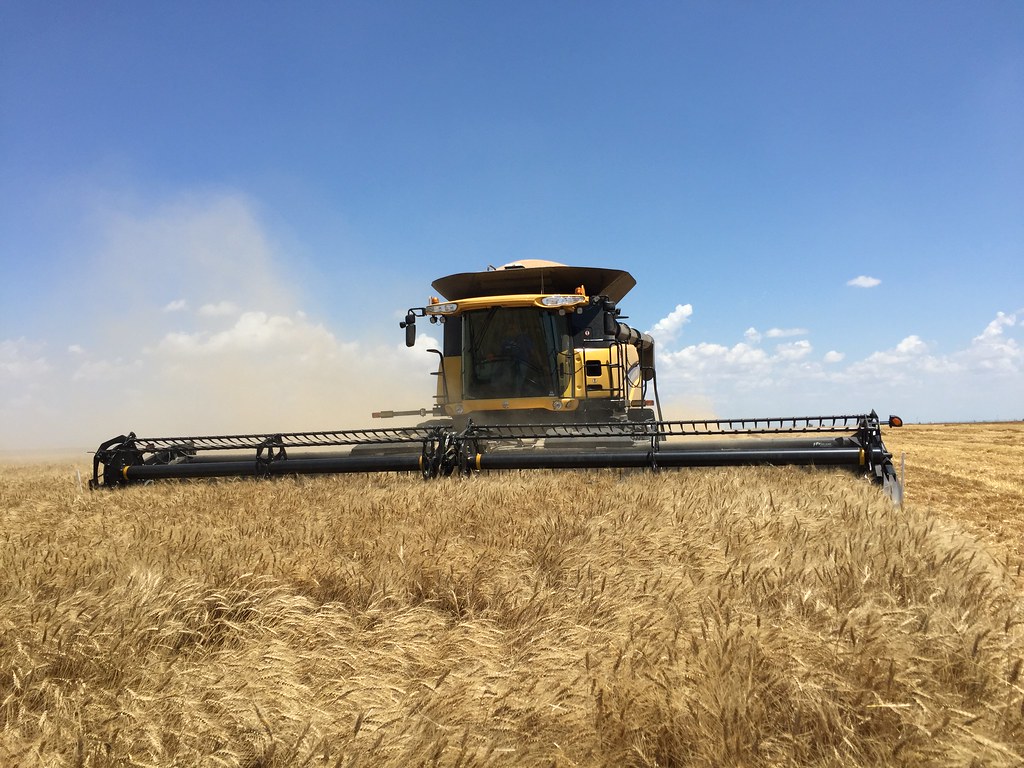 This is what 100+ bushel dryland wheat looks like in western Kansas. 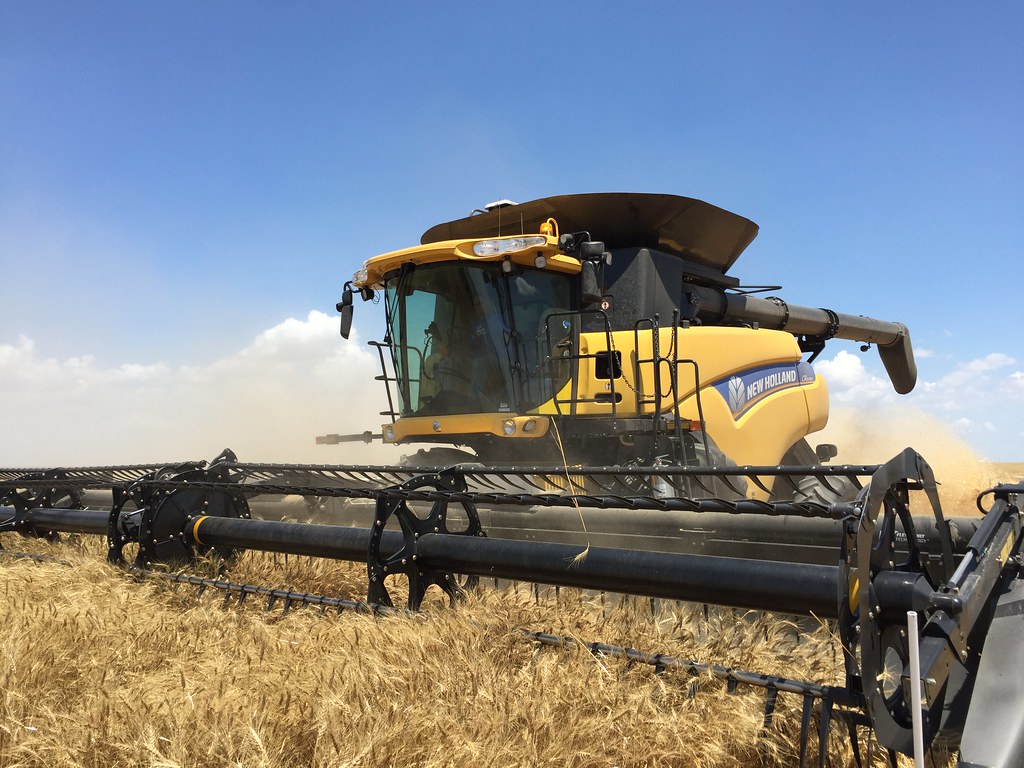 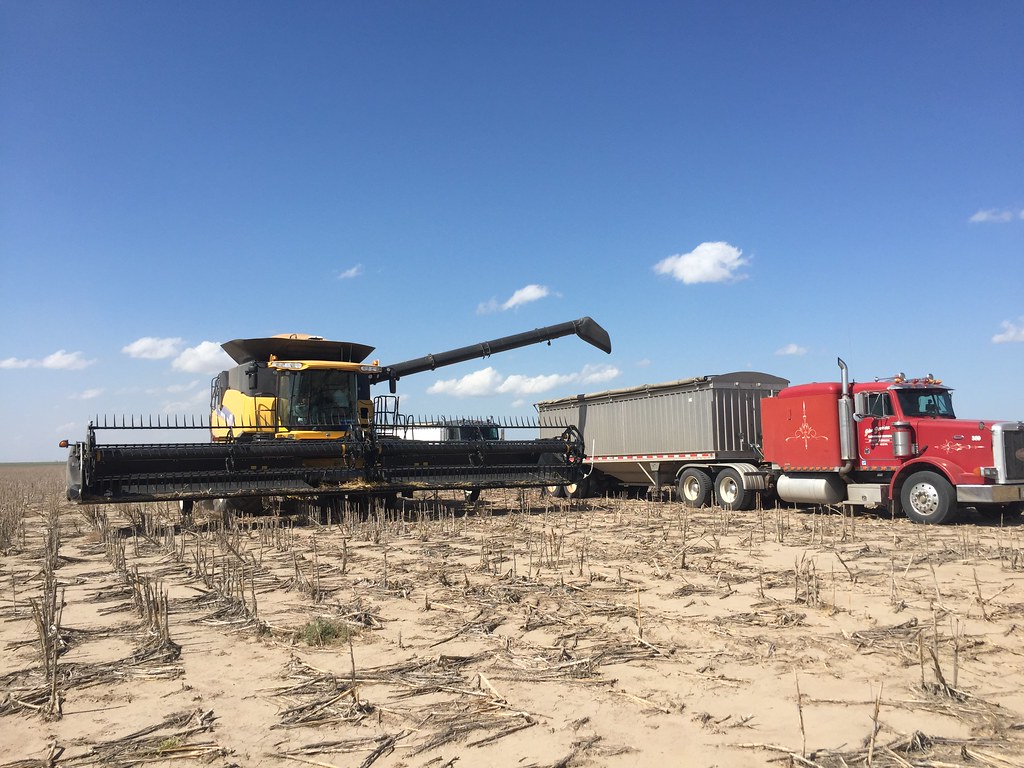 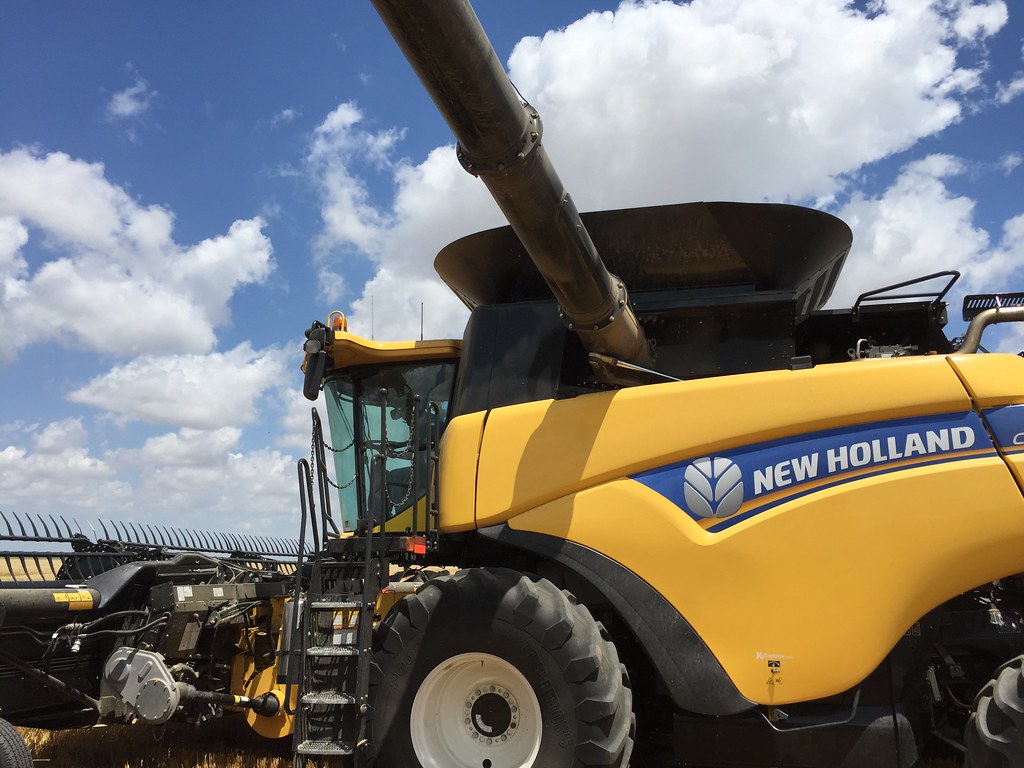 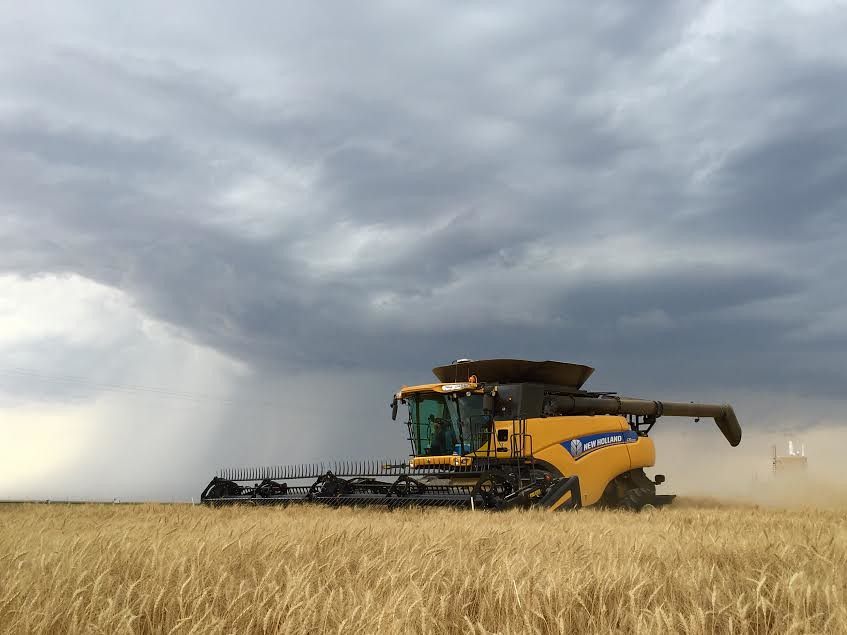 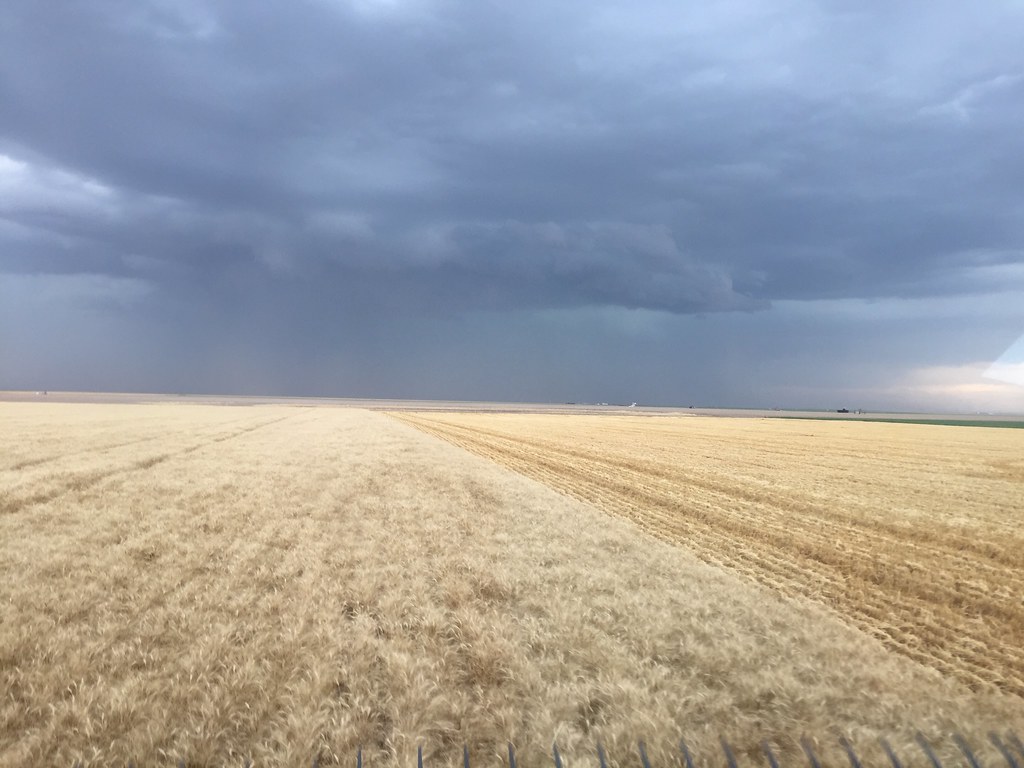 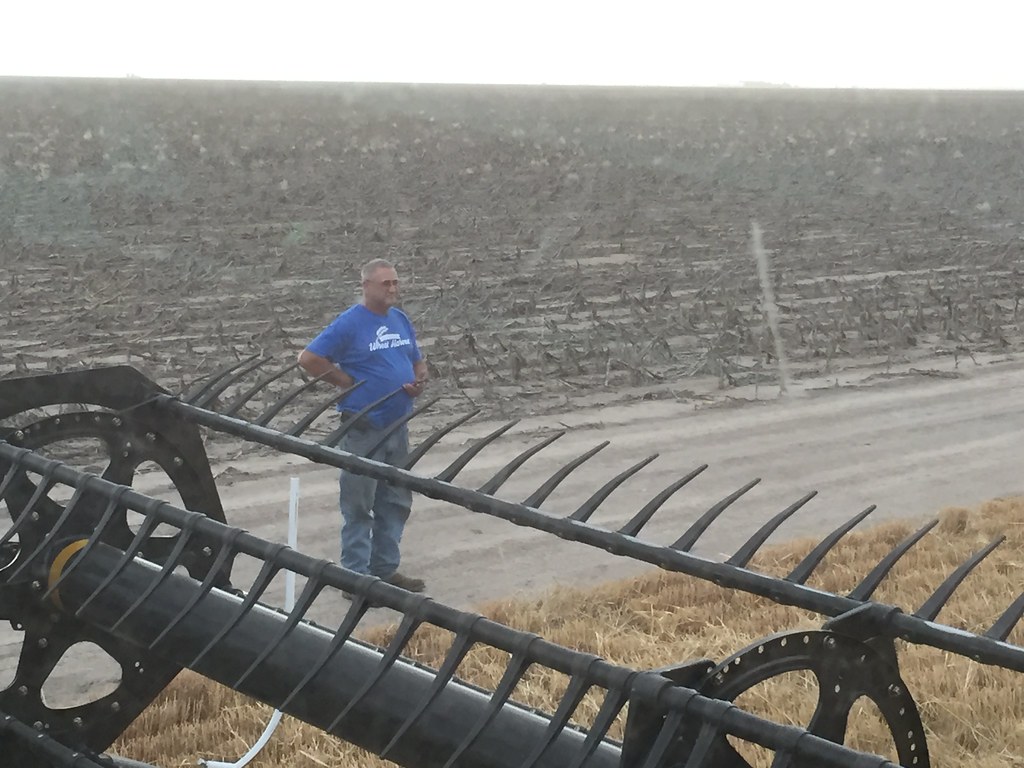 So, what does a harvester do with a rain day? Well, one day or even a half day is usually welcomed to get caught up on what gets pushed aside while working. For me, it’s laundry, cleaning the trailer house, book work, mail and groceries. For Jim, it’s usually maintenance on the equipment. What do you do when you have a “raincation?” Well, that’s a different story. I am not one to just sit around very well. If I’m not doing something, it’s driving me crazy. Jim, on the other hand, doesn’t mind watching TV and taking naps. I’m looking for somewhere to go and he’s just wanting to hang out.

One day this week, though, we made our way into Garden City to pick up a part for one of our harvester friends who’s camped in Manter, KS. So, while we were in Garden, we had to make a “quick” trip to say hello to Paul Steiner. Most owners of MacDon heads know Paul and it’s always a good day when you can have a quick (or not so quick) visit with a friend. While we were there, another harvester stopped in to say hello, too. 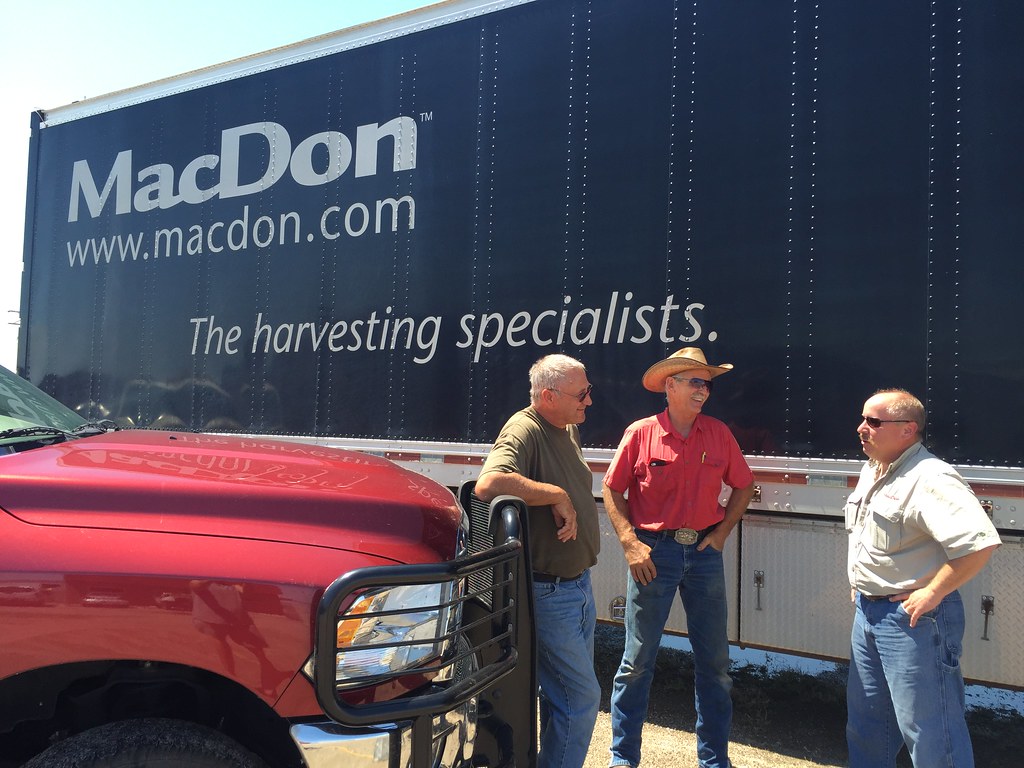 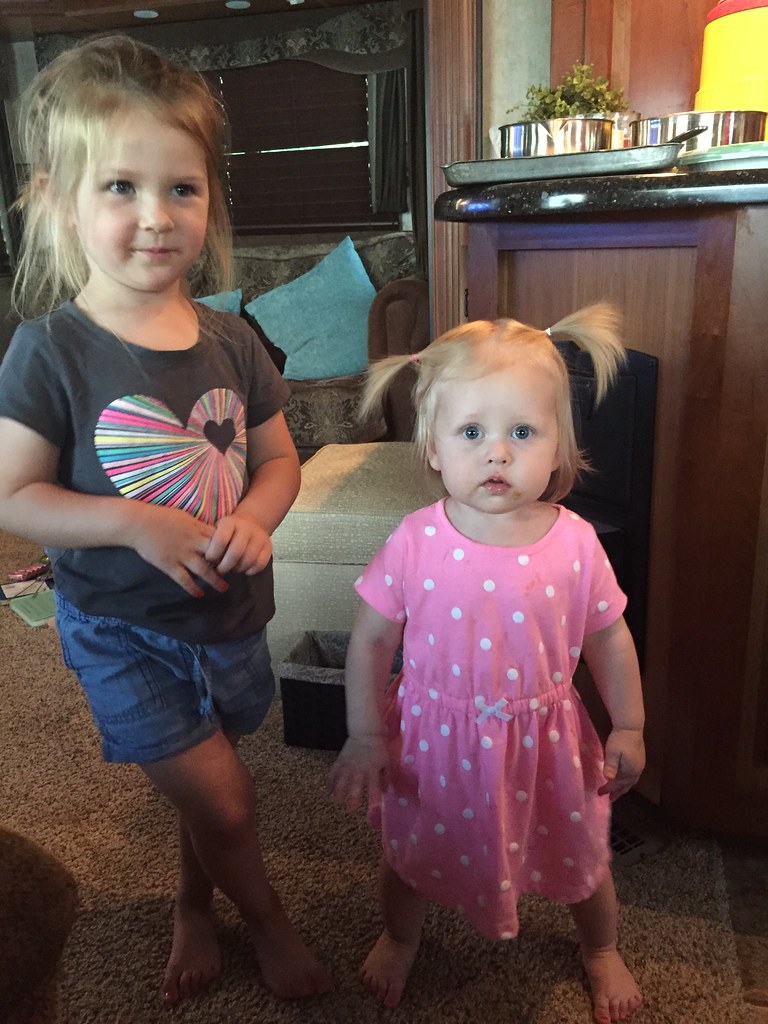 Aren’t they about the cutest darn little girls?? Briar and Addie made my day! I loved spending the afternoon with them and their family. It made me miss my two little people all the more!

After a full day off, we were able to get back in the field later the next day. That’s what seems to be working. You’re able to get back in the field after a day off only to be rained on later that night. This particular day brought visitors to the field. We were visited by the High Plains Journal team of Cody and Kylie. They brought Kim Goodnight with ITC Holdings Corp along with them. ITC Holdings is sponsoring the All Aboard Wheat Harvest Combine Cam this year. Kim jumped in the combine cab with Jim for a chance to see the wonderful crop we’re working on. According to Holly Martin, the conversation between the two was mostly about how harvesting has changed over the years (there is audio with the camera).  That it has!

Thank you, Kim and ITC Holdings, for the cooler you gifted us with. That was totally unexpected and so appreciated…just look at that smile on Jim’s face! You made his day. More importantly than that cooler (and the food/snacks that were inside), thank you for sponsoring the combine cam! You have made it possible to show the world (yes, the world) what we’re doing in Kansas…or Texas or Colorado or wherever we are. I’m all about educating the public about where their food comes from and appreciate having this amazing, one-of-a-kind tool in the cab of our combine! 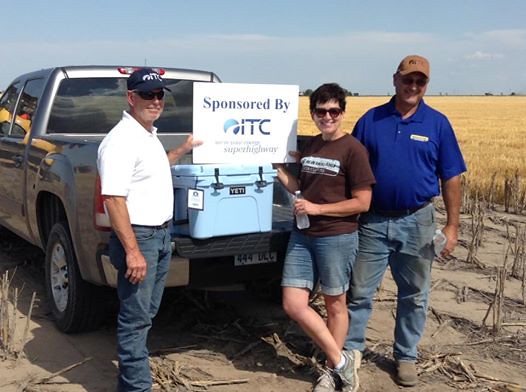 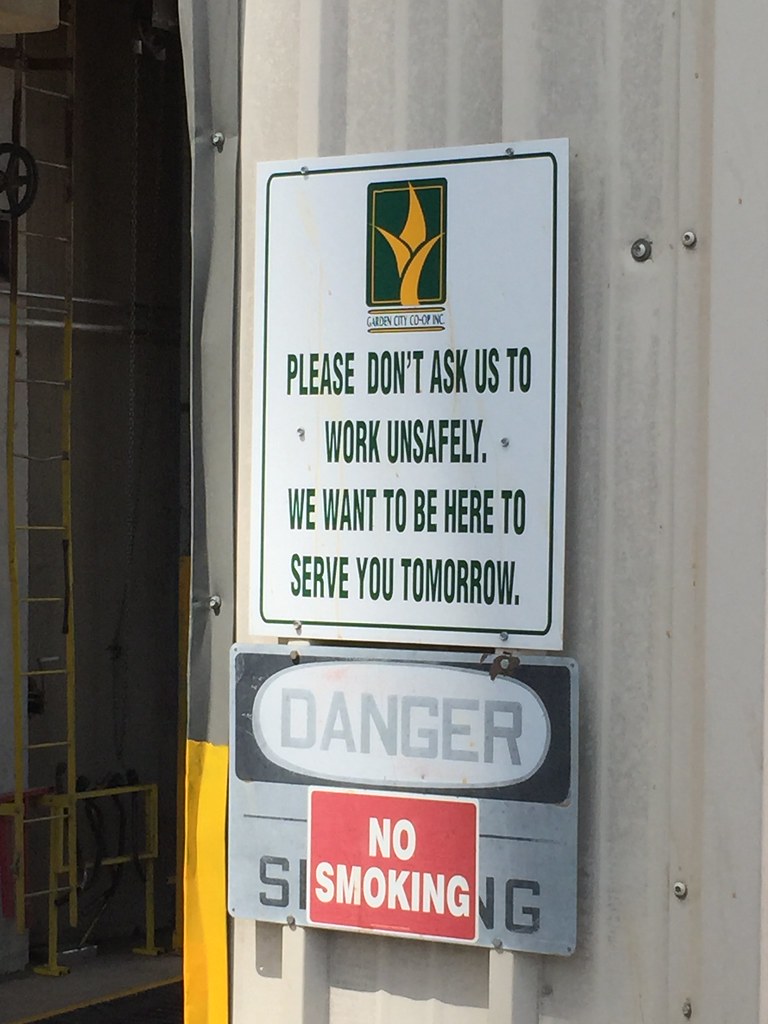 I appreciate seeing this safety sign at the Big Lowe Elevator which is part of the Garden City COOP. 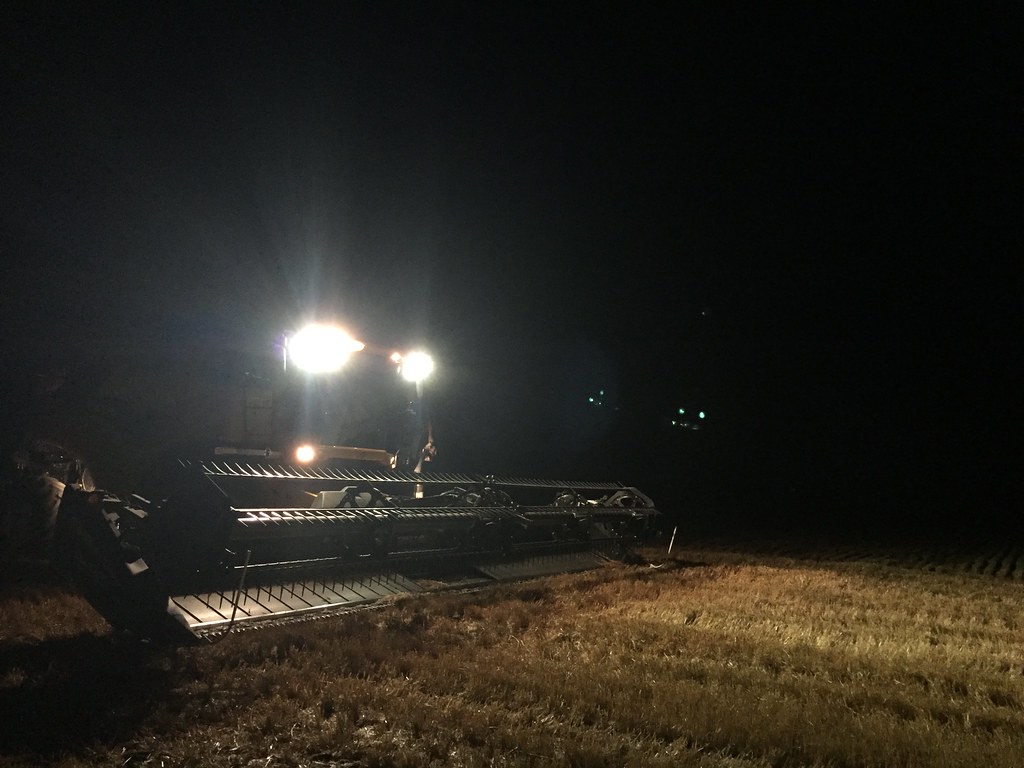 So, one of the challenges of harvest is playing the game of Race Against the Clouds.

When those dark clouds start building on the horizon, I start wondering how many more rounds I’ll be able to make before they are right above us. Maybe they’ll give me one more round, just one more round. Most times, they generally win the game before the field is finished. Not tonight. I WON! I finished the field just as the rains began. Hot Dog! But…the rains kept coming and kept coming. Last night (Friday night) we had over two more inches. However, the weatherman says beginning Tuesday…the highs will be near 100 degrees again. Let the sweltering begin!