All Aboard Harvest | Still Waiting to Get Into That Routine
13283
post-template-default,single,single-post,postid-13283,single-format-standard,qode-quick-links-1.0,ajax_fade,page_not_loaded,,qode-title-hidden,qode-theme-ver-11.2,qode-theme-bridge,wpb-js-composer js-comp-ver-5.4.7,vc_responsive

20 Jul Still Waiting to Get Into That Routine 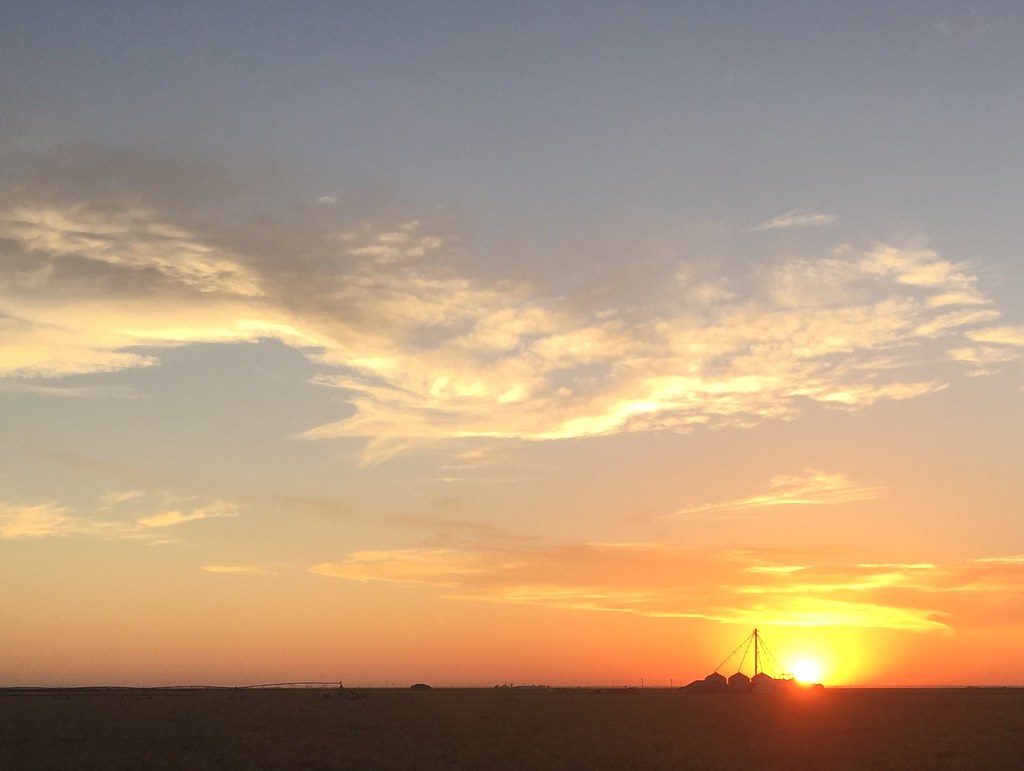 One of our last Kansas sunsets. 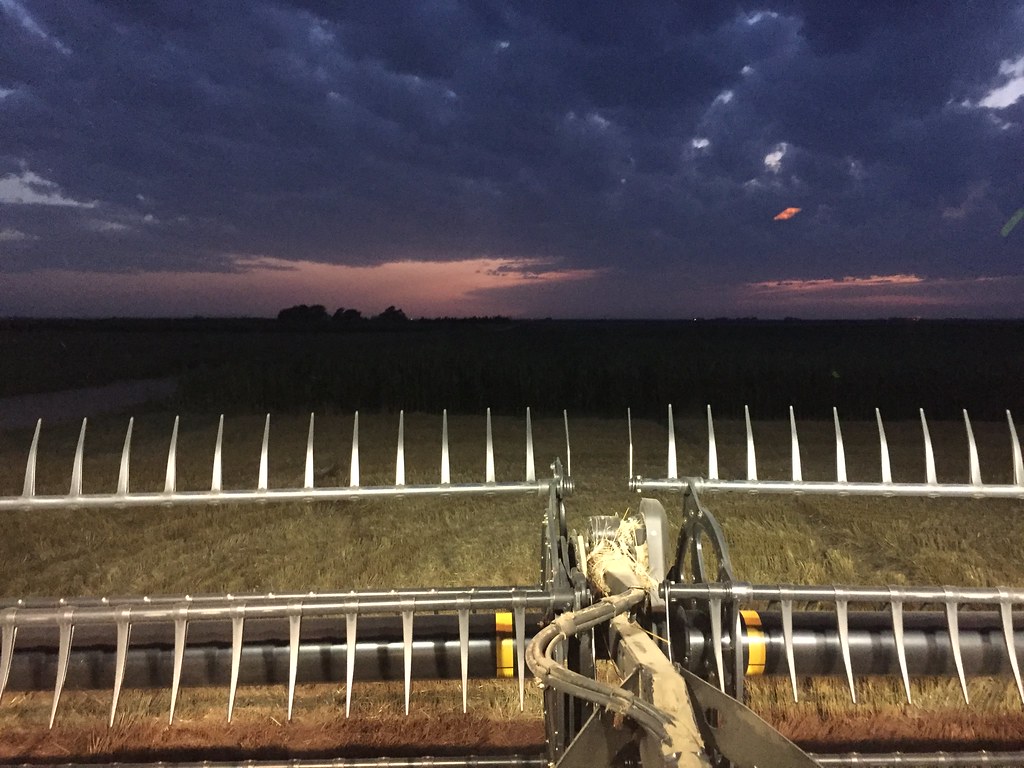 It didn’t take long to finish the field and then what was ahead of us was the worst part of the job…clean up. It was HOT – like 100 degree hot. And wind? Nope. None. We started cleaning on the header first – the dirtiest of the two. We both tried finding reasons to sit in the shade so when the crop duster flew right over the top of us, it was reason enough to stop and enjoy our own personal air show. Crop duster pilots have my utmost respect! I honestly believe they are part daredevil, part crazy! How they maneuver their planes without crashing is an amazing feat! 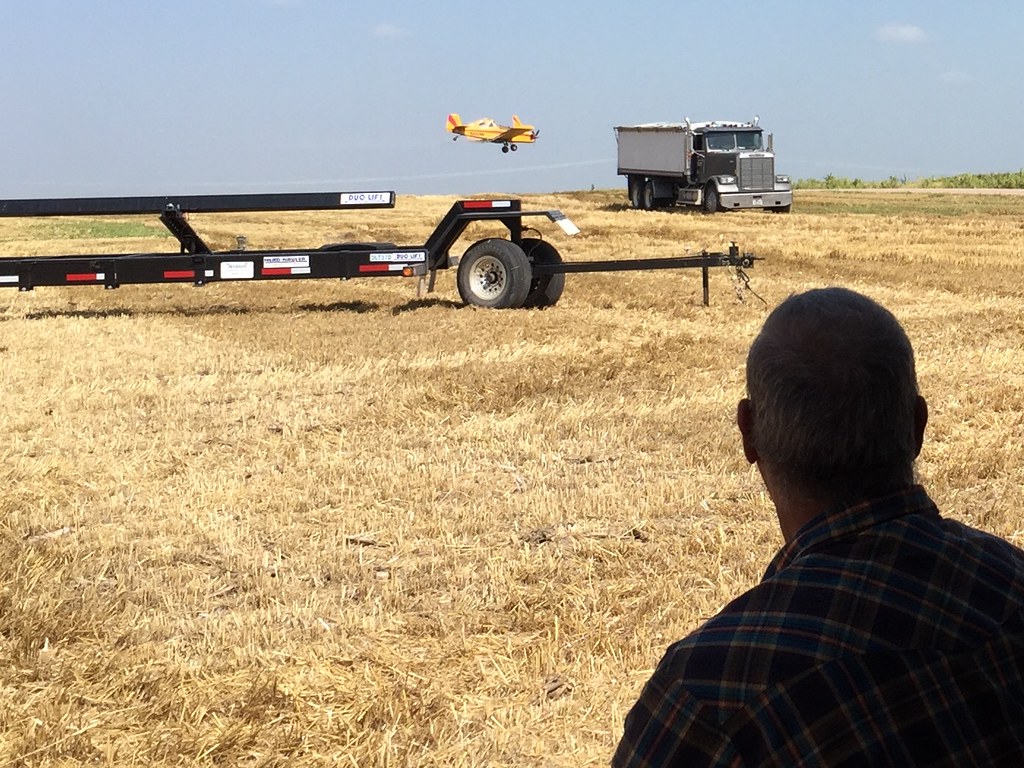 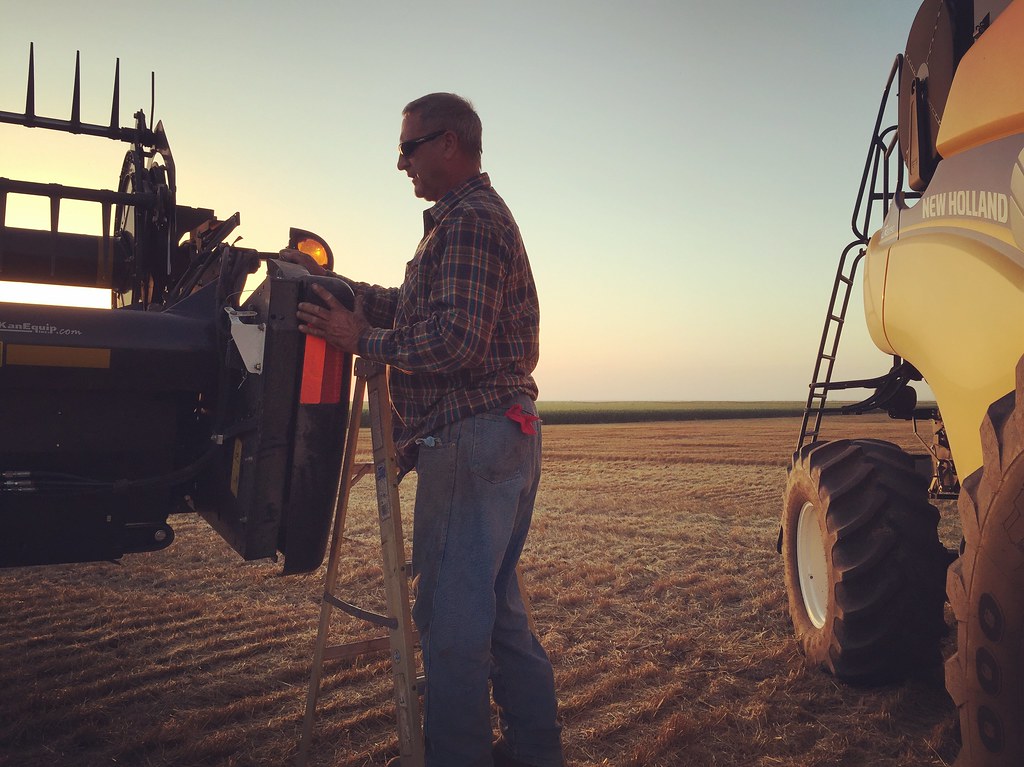 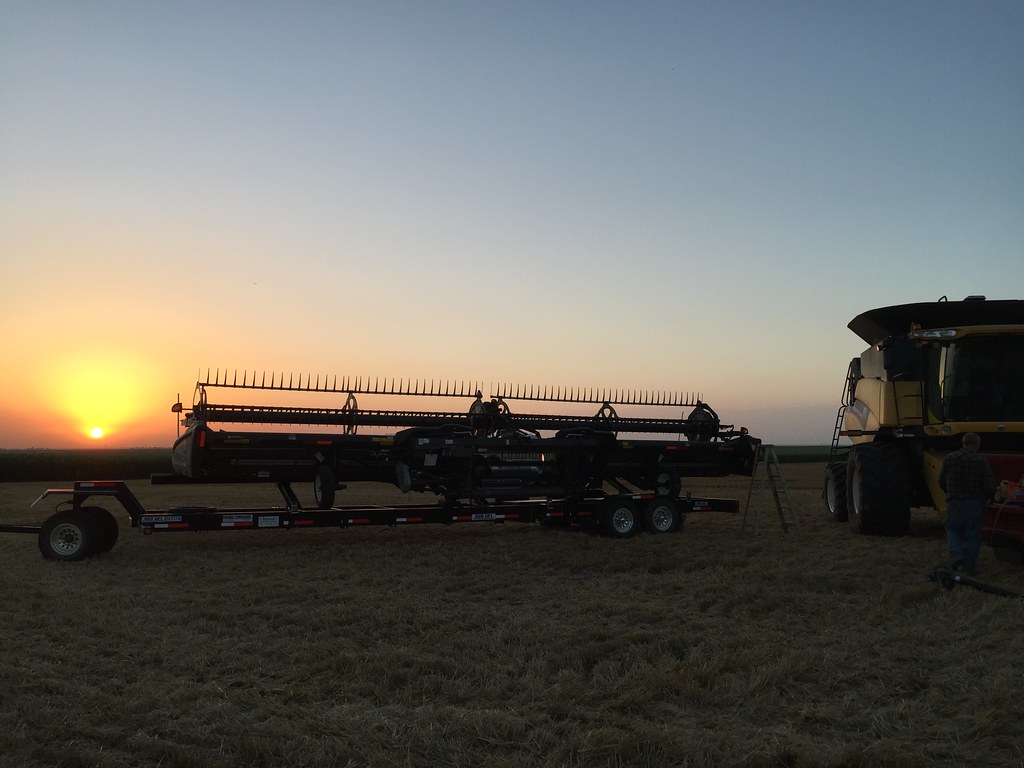 When we finished the header, we quit for the night. The combine would have to be done the next day.

We woke up to a fairly brisk wind and it was cool. Well, cool for the SW Kansas desert. Although, with all the rain the area had, it wasn’t much of a desert this year. The corn shot up from being a foot high when we arrived to over six and tasseled literally overnight. It didn’t stay suitable for humans very long. The wind died and it got very hot again. But, the job had to be completed. So, we would work for a while and then find a reason to go into Garden City. I think we must have made a half dozen trips to Garden City just to be able to sit in the air conditioned cab of the pickup. 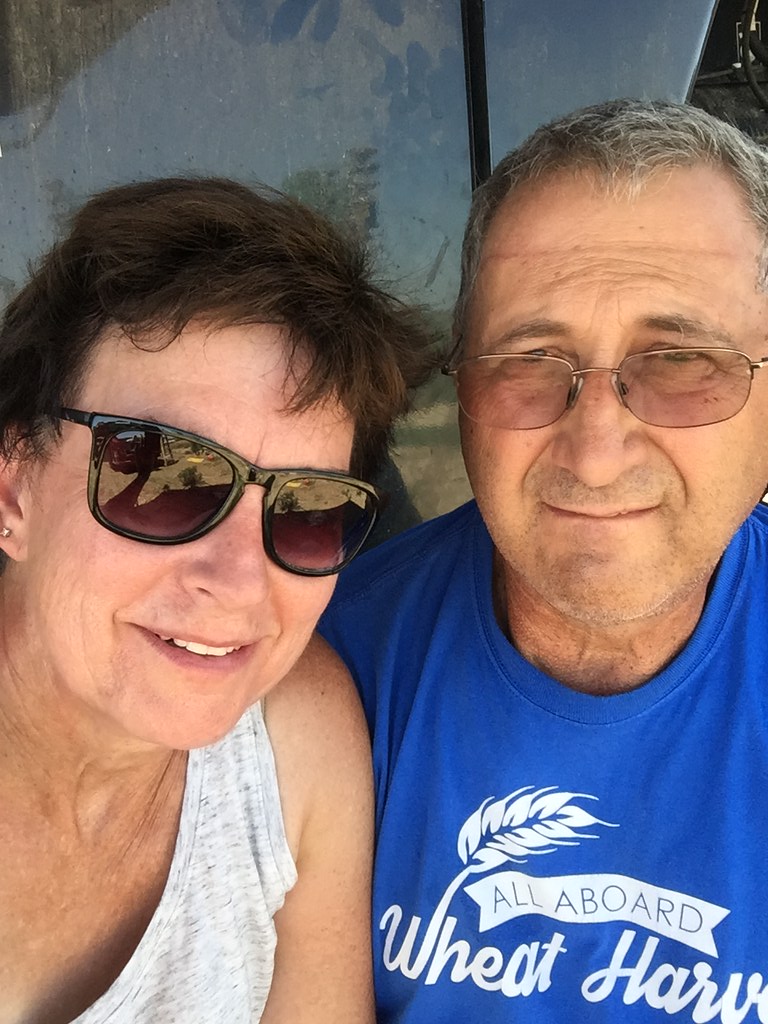 Cleaning combine in the heat of the day was about as painful as childbirth. Even Jim was sweating…and he never sweats. It didn’t get fit to do anything until the sun began to set. We loaded the combine just as the sun was setting and the rest was done after dark. We finally finished about 10 pm – when it was actually fit to do anything!

We took the trailer house and Frank (with the header) to the farm near Limon, CO the next day. The trip was uneventful – which was a good thing! When we arrived, we set up the house-on-wheels and found the farmers we had cut for the past several years. They were busy cutting wheat so we hung around the field until they quit fo supper so we could say hello. It was really good to see all of them again!! 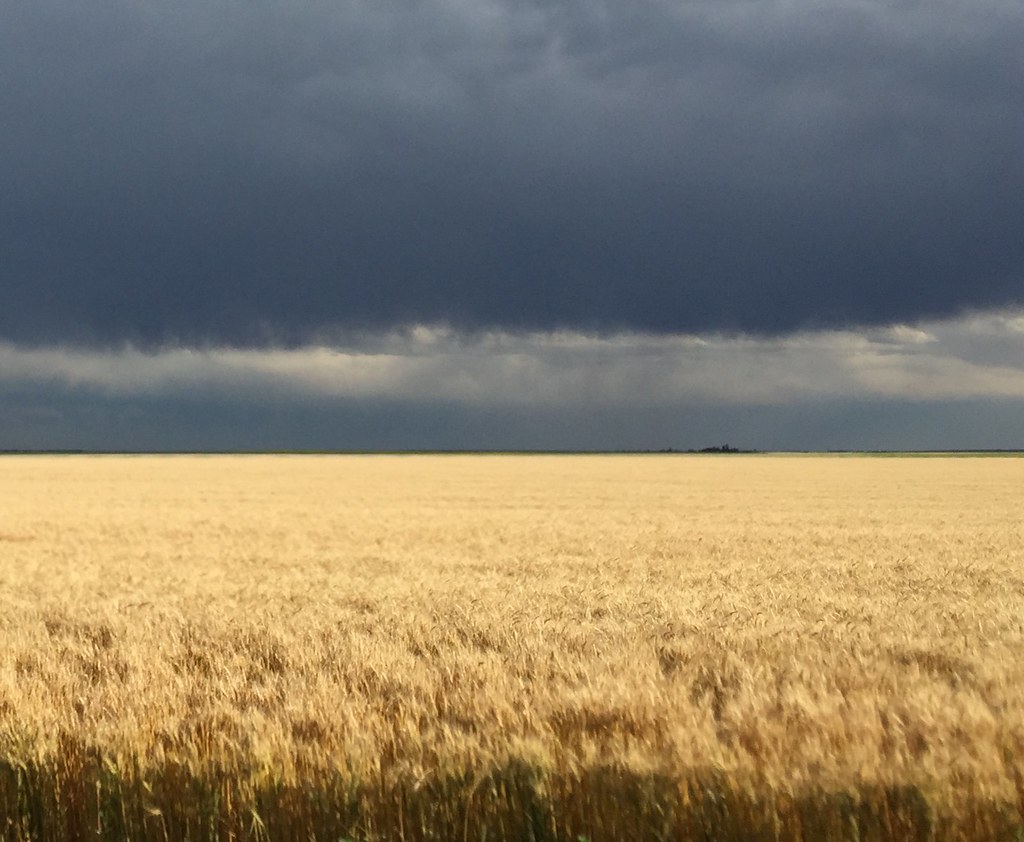 The storms were rolling in as we arrived in Colorado – guess we brought the rain with us. It seems like we’re good at that! 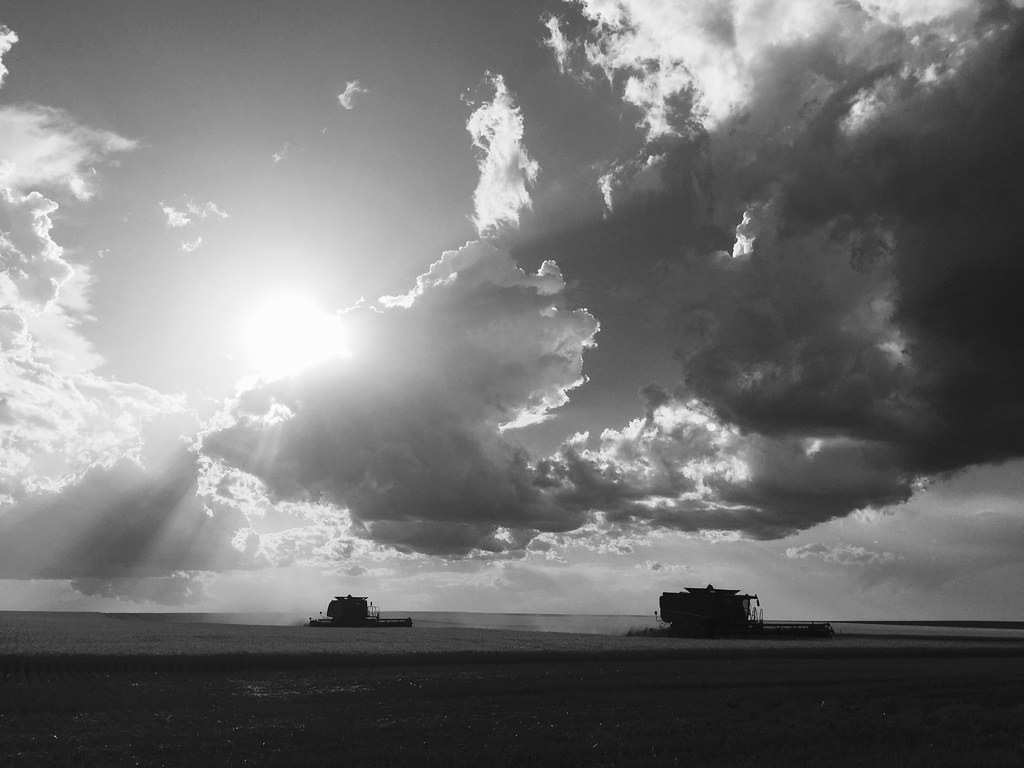 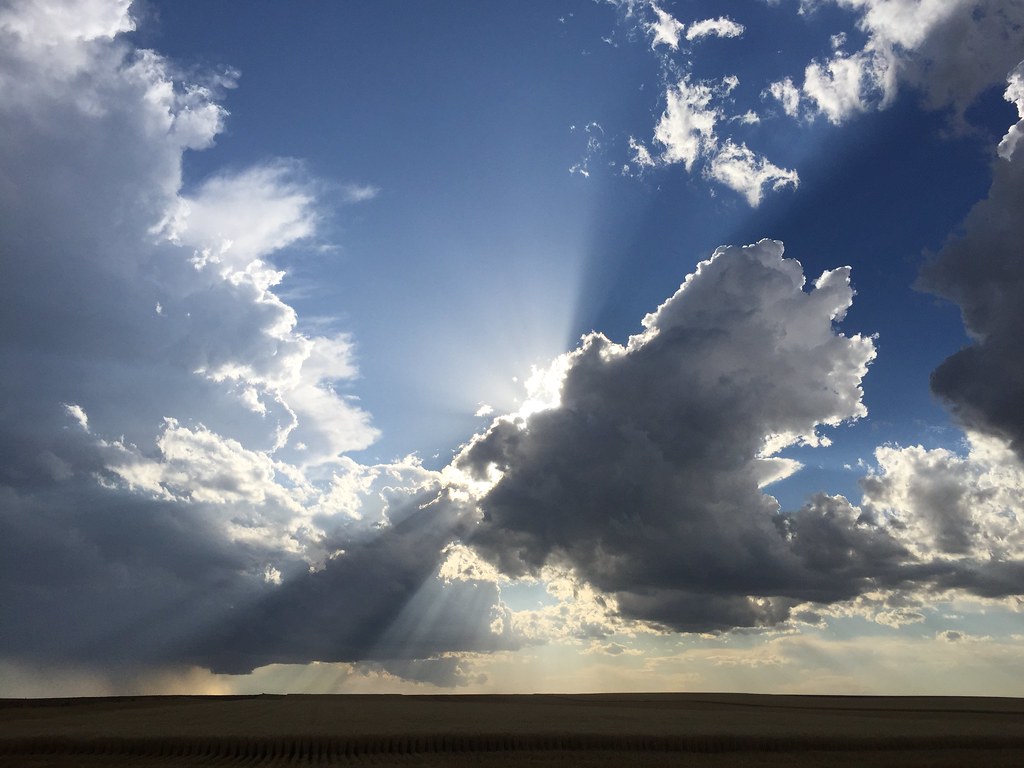 We left after we had a piece of pizza with them and headed back towards Kansas. We didn’t make it all the way. We ended up spending the night in Scott City. So, we didn’t have much farther to go the next morning. Once we arrived at the farm, we settled up with our farmer, loaded the pickup on the car trailer and headed north again. 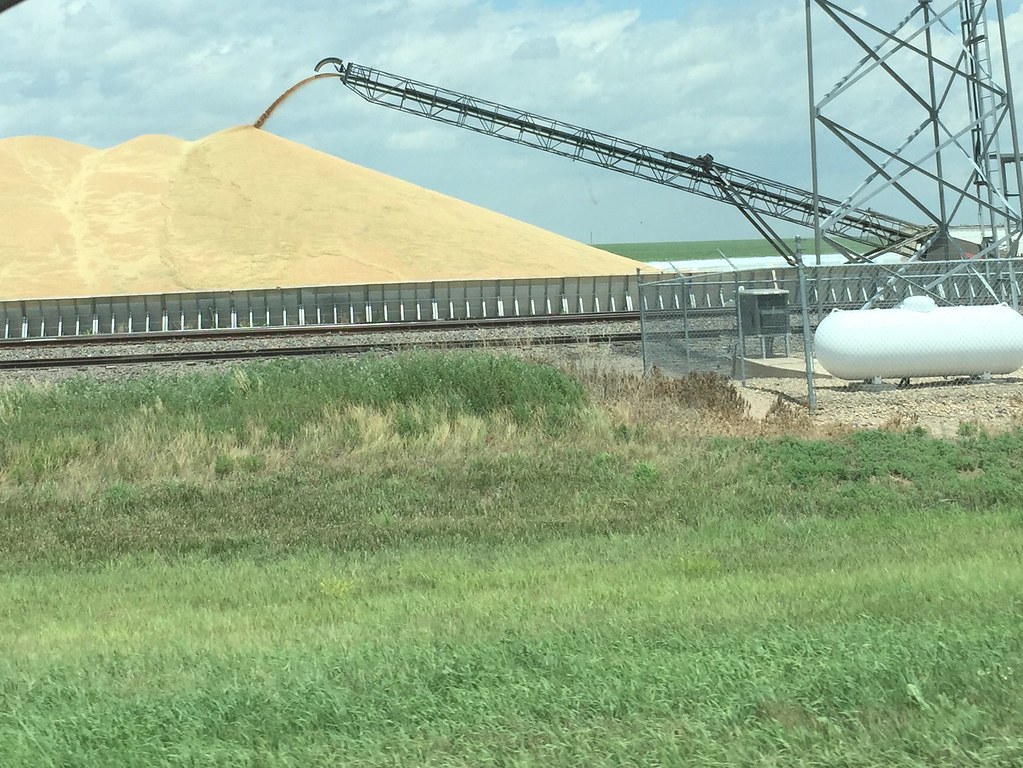 There are a lot of these piles scattered all over the Midwest! A bumper crop with no place to take it.

When we got to our destination we started unloading everything, of course. It was then that we realized we had a problem with one of the front combine tires…a bulge. Jim immediately got on the phone and started making plans for what we were going to have to do to get a new one. Apparently, this particular tire is not one that would be easily found. The new one was going to be shipped from South Carolina, which would take several days. We had to have a tire NOW. The plan was to take the car trailer to Gothenburg the next day and load up a used tire that could fill the gap until the new one arrived. Jim thought the trip was a little more than 200 miles. I’m not sure where the additional 100 miles came from but the one-way trip was over 300 miles. We arrived in Gothenburg, loaded the tire and headed right back towards Colorado. 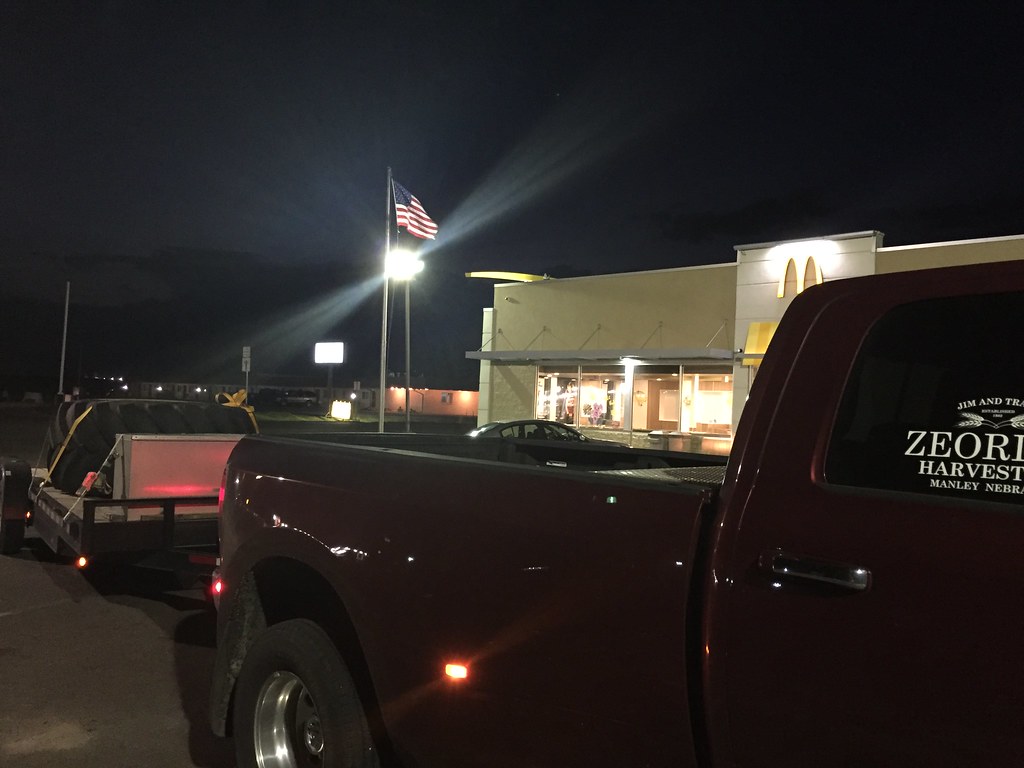 McDonald’s double cheeseburger meal was a must as we were driving through Burlington, CO at 10:30 pm. 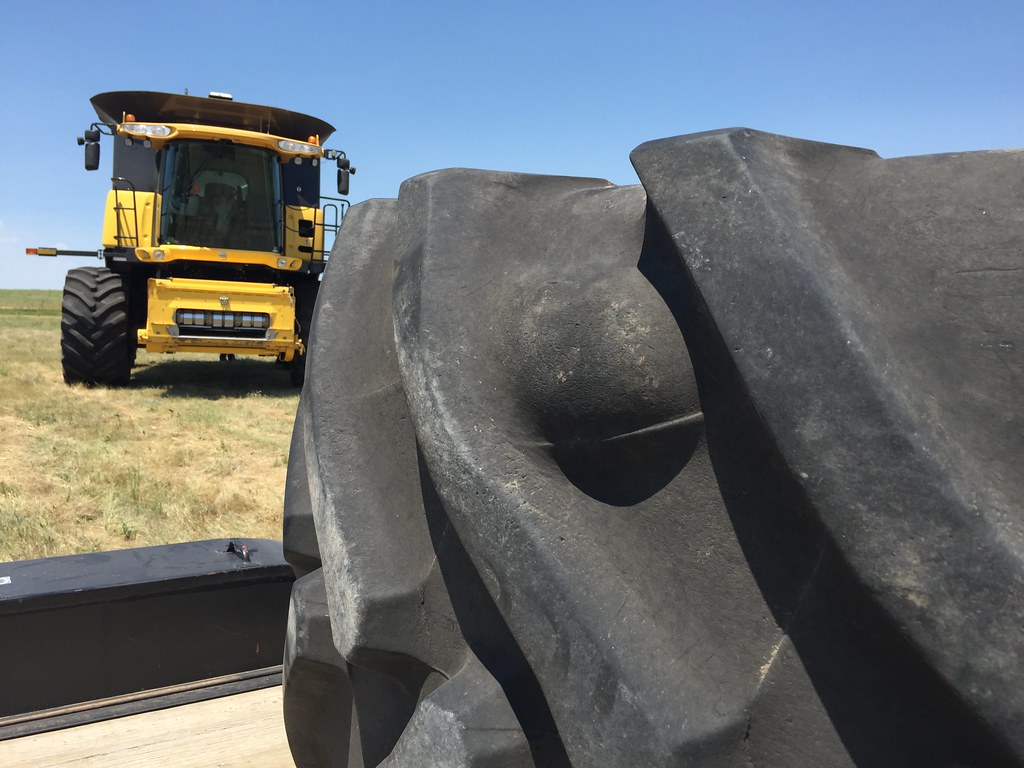 This puts us at Sunday (7/17). One of Jim’s very favorite places to visit in Limon is the Witt Boys’ NAPA store. They have always treated us so good – more of those “going above and beyond” kind of people. Whenever Jim talks about them, it’s always with pride in his voice. And…they lived up to that respect yet again. Sunday morning arrives and Witt Boys’ employees are at the farm putting a new tire on the Beast. Most people don’t understand the urgency of getting combines back in the field during harvest but these guys do! Thank you for your help with our situation! We couldn’t have done it without you. 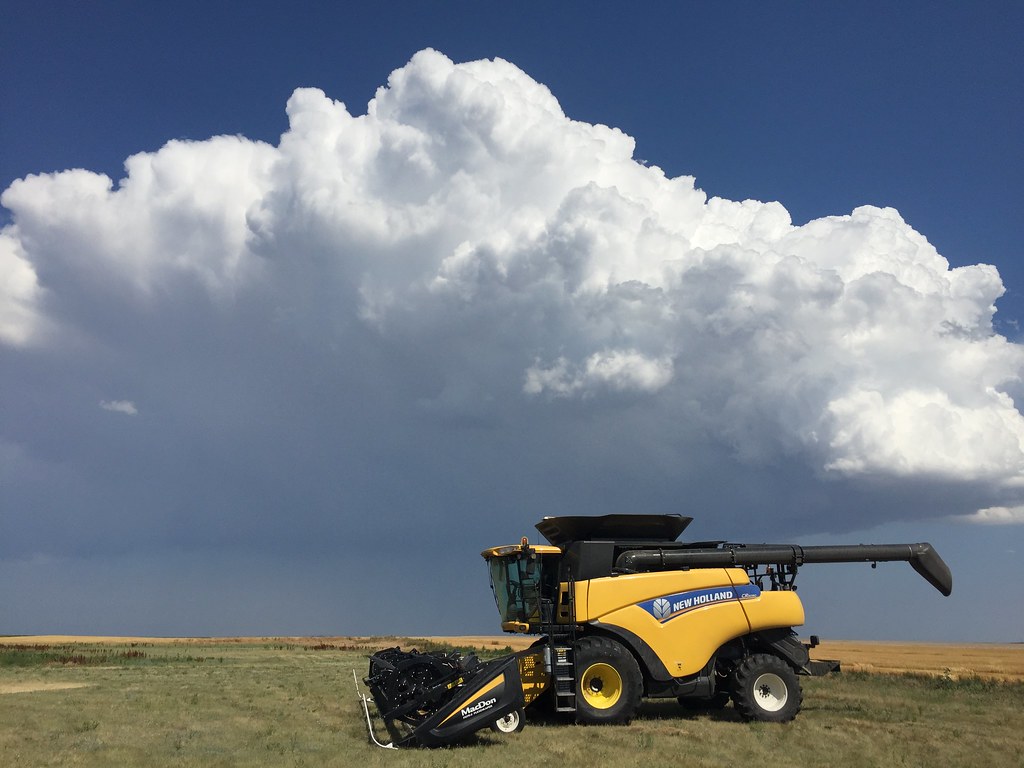 So, with the used tire mounted, we were ready to roll again. Like the yellow rim? Interesting how many people saw that and commented on it rather than the awesome cloud! That silly cloud dropped some of the biggest drops I have ever seen – and caused us to have to park the Beast. We’re helping fellow harvesters, Ryan and Casey Graham, here in the Limon area. Once we get all the machines back together again, we’ll have four yellow combines in the same field.

Another much larger cloud made its way over to us before we could get back in the field again. This time it rained enough to shut us down all day Monday. Another day to catch up on things – but that didn’t happen. Instead of going to get groceries and doing laundry, I ended up getting a haircut. I guess that was okay, too! 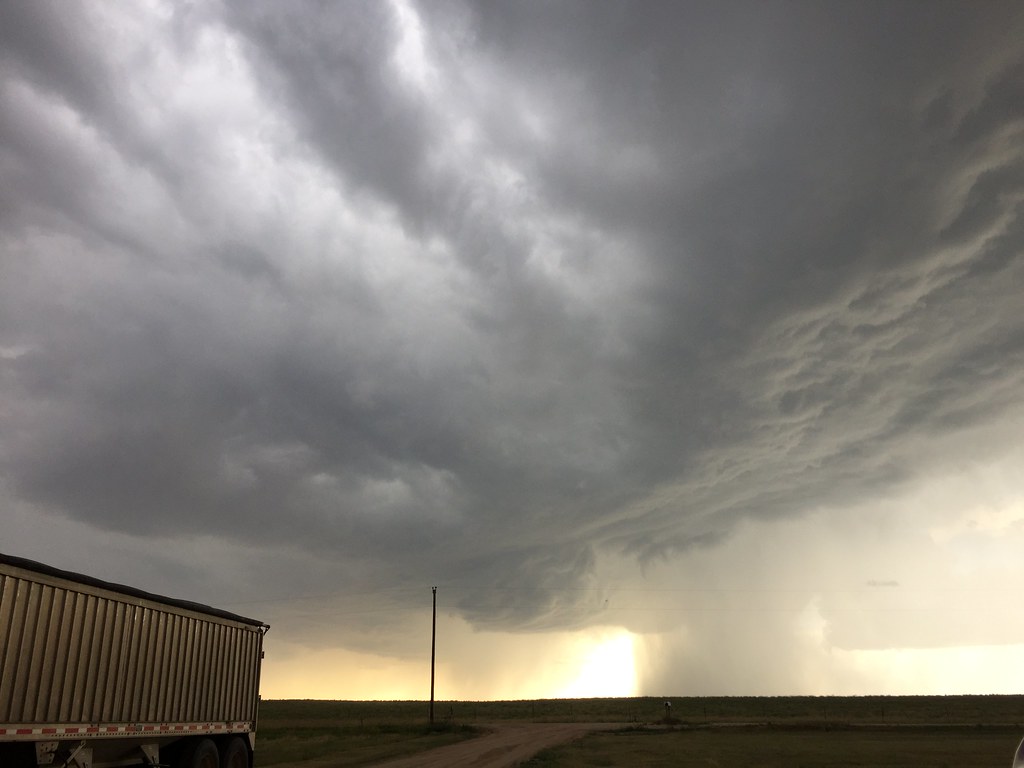 This storm ended up dumping over 1/2 inch of rain at our field and nearly 2 inches where the trailer house is sitting. Needless to say there was a lot of water in the fields. 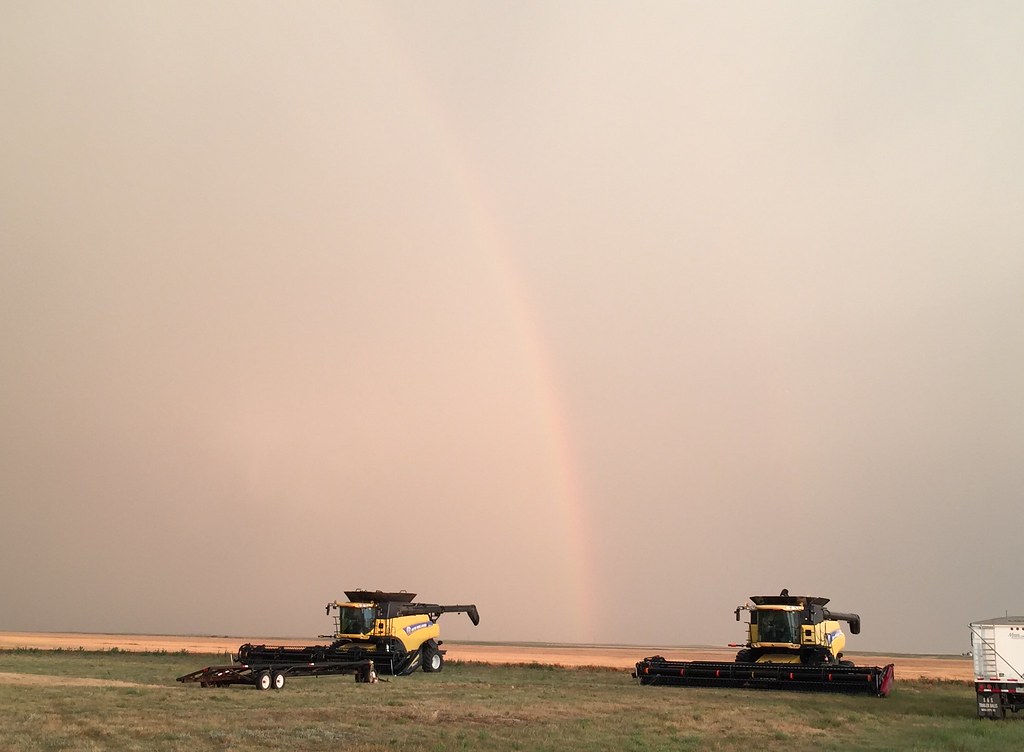 We got started cutting again Tuesday at noon. The wheat is absolutely beautiful! It’s another once in a lifetime crop for the farmers in this area. The yield monitor has been holding steady at 72 bushels per acre – sometimes a bit more and sometimes a bit less. It’s standing and it cuts fairly fast. I can now go 4.5 to 5 mph. This is so much more enjoyable than the 1.8 mph that I had been going in Kansas with the lodged wheat. You’d be amazed how that wears on a person! The BIG problem we and the other farmers in the area have is storage. The elevators are already full and they’re not sure what they’re going to do to handle the situation. It could get VERY interesting before this is over.

We had a good afternoon and then the clouds started rolling in again. The weatherman was calling for storms with a lot of rain. We got a few drops just as we were stopping for the night. One thing about Harvest 2016…we haven’t had many full days. I’m certain not all harvesters have been in this predicament but it sure seems to be the story for the Z Crew. There’s nothing worse than getting geared up to go and then coming to a screeching halt. Once the routine of being in the field is broken, it’s so ridiculously hard to get back into it again. We’re still waiting to get into that routine. UGH!! 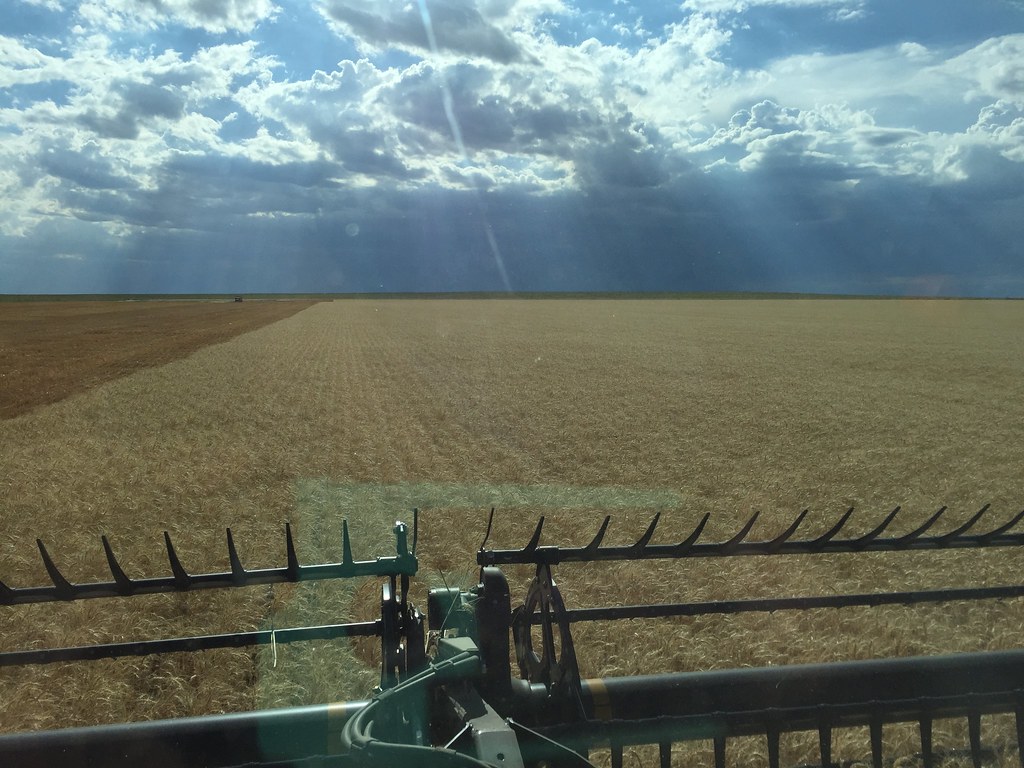 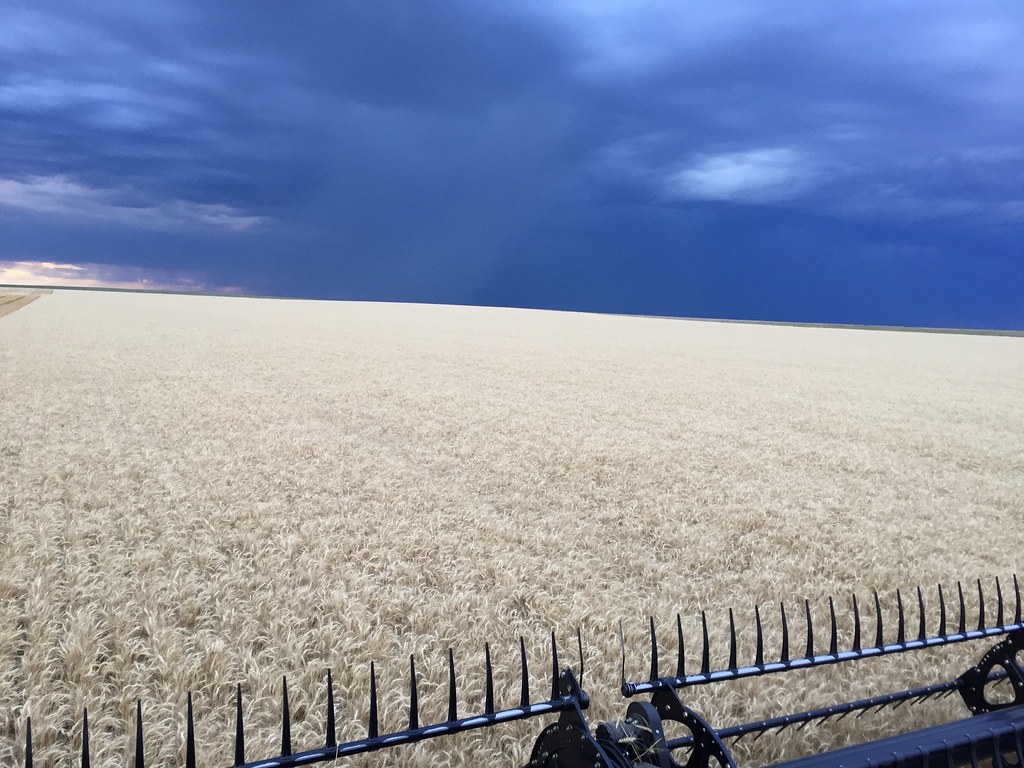