All Aboard Harvest | Patiently Waiting and Q&A
13388
post-template-default,single,single-post,postid-13388,single-format-standard,qode-quick-links-1.0,ajax_fade,page_not_loaded,,qode-title-hidden,qode-theme-ver-11.2,qode-theme-bridge,wpb-js-composer js-comp-ver-5.4.7,vc_responsive

Garrison, North Dakota—The kids and I survived the long trek to North Dakota. They really did as well as I could have hoped, but that doesn’t mean this mama wasn’t just a little stressed.  But, all’s well that ends well! For now, I’m just going to pretend the return trip doesn’t exist!

I have been in North Dakota before, but this is my first time for an extended stay. What beautiful country I find myself in. Gently rolling farm land can be seen in all directions. We are staying just a few short miles from the Missouri River and Lake Sakakawea, the third largest man-made reservoir in the United States. The weather has been warm, but pleasant with just a hint of coolness in the breeze.

After cutting nonstop for weeks, the harvest has finally caught up to itself. The wheat isn’t quite ready here (nor in Montana where Mark is), so we’ve been getting to have some much needed family time. It seems we have a few days together back-to-back and then we may go for weeks with very minimal time together. I’m trying to soak it in while we have it. We’ve tried to do a few out of the ordinary fun things like take the kids to the lake to play on the beach and water. Too bad prime lake time coincides directly with prime harvesting time otherwise we might make it a habit. Ryan’s tan lines (not pictured) made it obvious we aren’t lake people! We’ve also done more ordinary things like going to the park and getting to go for runs/walks as a family.

That’s the latest harvest news, such as it is. Hopefully I can write later in the week that we’re going. This stop has on-farm grain storage so they will let us cut at 16 percent moisture, which will help us get started a little sooner.

In the mean time, while we wait for harvest, I thought I may address several questions that have popped up over the season with a common theme. I attempted to do something new a few weeks ago and make a video to answer all the questions, but I think I need a little practice in broadcast journalism before we go live with that. Nothing says “humbling” more than listening to your own voice on video. I could probably make a bloopers movie from all our rejected footage. I would get almost to the end of my information and then I’d get stuck on the word rotor. For some reason, I kept saying router. Ryan would say, “Honey, practice. It’s a rotor, roooooowwwwwwww-ter…” To which I would be, “I know what a rotor is and how to say it, I just can’t spit it out!” Then there were toddler interjections and baby babble and the ill timed radio chatter or Ryan forgetting we were live and comment on something. It was hilarious! As a result, here are written answers.

Why do we run stripper headers? Many of our farmers desire to run stripper headers to aid them in their no-till conversation practices. Since the headers just take the grain from the head, the remaining plant is left standing in the field. This helps holds snow in place in winter in snowy areas and shades the ground helping with weed suppression.

What caused the wheat to go down (become lodged)? Some examples of conditions that may cause it to go down are excess moisture weakening the straw, wind, grain too heavy for the straw to support, or a combination of these conditions.

What is the main way a stripper header is different than the draper headers? The headers are very different. The most basic explanation is the draper headers cut the wheat stem at a desired height, then, the majority of the plant is fed into the combine. Stripper headers “comb” the plants, if you will. This combing motion pops the seeds out of the head and the grain is then fed into the combine leaving plant residue in the field.

How are the stripper headers in down (lodged) wheat? The headers work fine in lodged wheat. The combing motion of the fingers can pick it up. It allows less material to run through the combine, making it easier to collect the grain. When running a draper header in lodged wheat, a lot of plant material runs through the combine. Sometimes it’s hard for the machine to separate the grain and plant matter in those conditions. 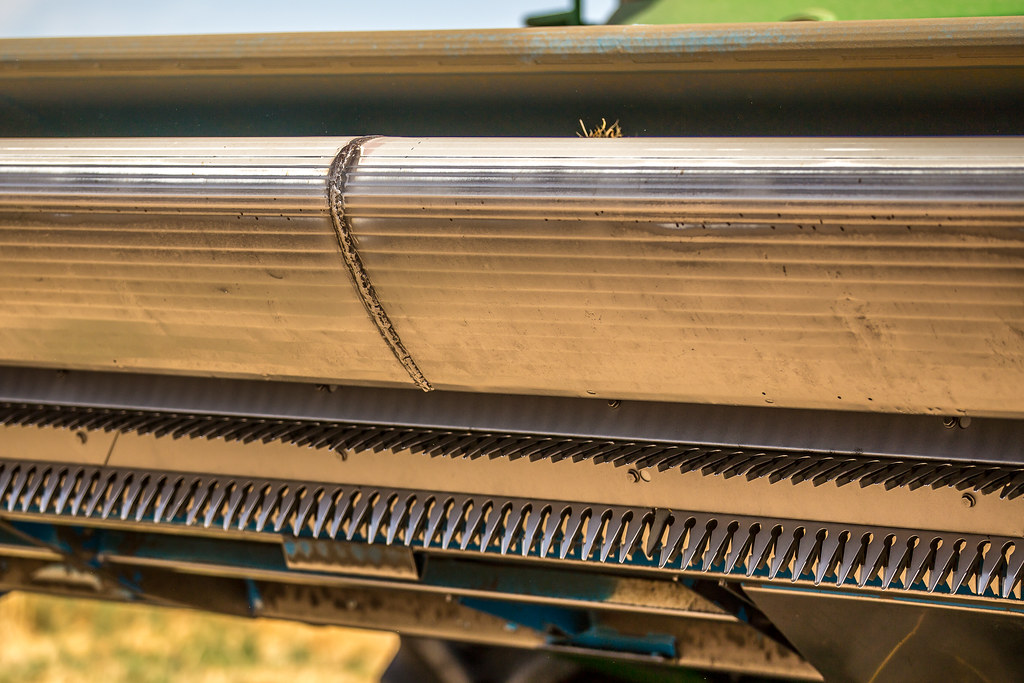 The fingers spin opposite the direction of travel. This pops the grain out and conveys it up and back into the combine.

Thanks for those who have asked questions. I hope I answered all of them and that this helps clarify things.

Since we have received interest in our stripper headers and questions about cutting in lodged wheat, I created a video of the view from the cab. Toward the end of the video when the camera is looking out the right windows, you will see the combing motion of the header through the wheat. Ryan was moving his thumb over the buttons on the hydrostat to show some of the adjustments he can make.